Looking back the last weekend MLS fixture of Seattle Sounders vs Vancouver Whitecaps where the home side was able to score that gives them a late victory.

This tactical analysis will investigate how Vancouver Whitecaps were almost able to do a clean sheet and draw with Seattle Sounders. Moreover, it will reveal the crucial tactics that both teams applied against the ball. 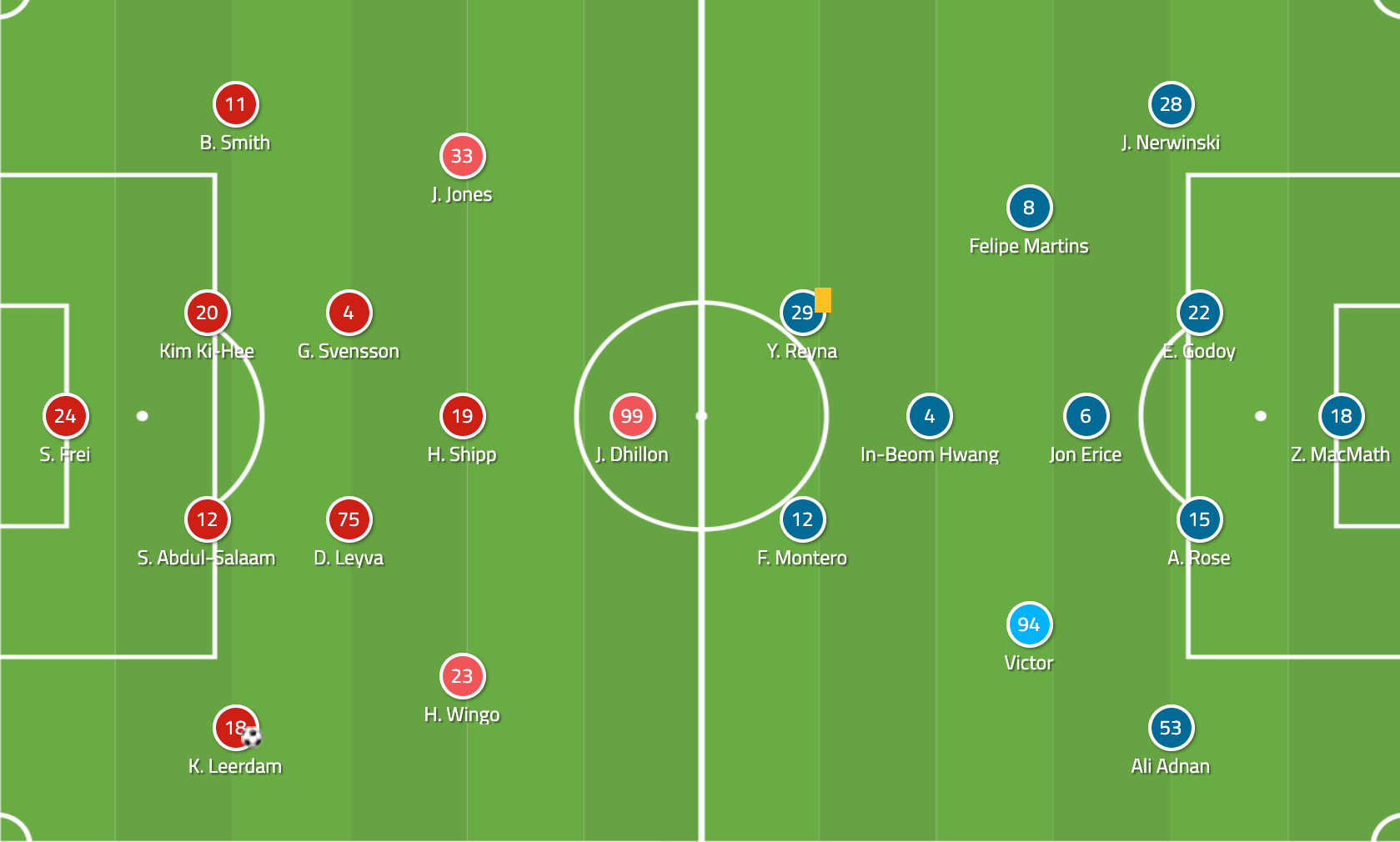 Seattle Sounders are in a quite bad shape recently as they really struggled in MLS. They recorded three losses and one draw in their last five games. Therefore they must need to win this game.

Due to the squad rotation, there were several changes. Starting with the centre-forward position where Brian Schmetzer employed Justin Dhillon instead of the regular starter Raúl Ruidíaz or Will Bruin who played in the previous match, against Montreal Impact. Also, a big change was to choose Gustav Svensson and Danny Leyva to the double pivot role, rather than the usual Roldan-Delem duo.

Compare to the Montreal game where Alex Roldan and Handwalla Bwana played, now Henry Wingo and Joevin Jones named as the wingers, whilst Harry Shipp stepped up to the #10 role instead of Víctor Rodríguez.

On the other hand, Vancouver Whitecaps has a pretty interesting form as they made five draws in their last six MLS games. Probably due to the fact that their tactics focusing on a strong defence. It also proves by the stats, they have an average 1.32 conceded goals per game whilst 1.1 scored goal per game.

Whitecaps now lined up in a 4-3-1-2 formation in order to match up the opposition shape in the midfield. Marc Dos Santos often changes formations according to the opponent.

Although Seattle Sounders had a bit bigger possession (55%), Vancouver still had the ball in a considerable portion of the time, especially in the opening minutes where they dominated on the ball. Therefore, it necessary to look into how the Sounders set up their pressing scheme to negate Whitecaps’ ball progression.

Starting with the basic structure for both sides. In possession, Erice – as the deepest midfielder – dropped between the central defenders to create a strong ball circulation. Thus Nerwinski and Adnan could step further up the pitch which moved their structure from the base 4-3-1-2 to 3-4-1-2.

Meanwhile, the Sounders’ 4-2-3-1 formation morphed into a 4-4-2 or 4-2-2-2 in pressing. This means, Shipp often occupied next to Dhillon and focused on covering the passing lanes to the midfield. The only time they started to actually put pressure on the centre-backs was when they attempted to drive forward on the ball.

Moreover, Jones and Wingo stayed around the wing or half-spaces. Leyva and Svensson had an auxiliary role as they positioned in the centre close to Victor and Martins.
When the ball moved wide, they shifted to the side to the wing to cover the nearby eight. Whilst the wingers also shifted to the flank and pressed the full-backs.

This often caused issues in the build-up for Vancouver which made difficult for them to reach the final third. One of the tactics to overcome Seattle’s press was in this situation below. As you may see, due to Vancouver passed from the wing to the centre, Seattle’s first line could not close in quick enough thus Erice was able to pass in between them towards Martins who dropped there to offer a passing option.

Although it was a good way to exploit the opponent press, Seattle were able to stop this progression with quick shifting. The winger, Jones instantly moved out to press the opposite winger who received the pass from Martins.

The home side favoured the lateral zones in their attacks which were useful since the opponent’s narrow formation focused on denying the central progression. Seattle’s tactics was to create crossing opportunity to play the ball to the box, especially with a ground pass thus the attackers could get in a shooting opportunity.

As the image shows below, Vancouver’s formation matched the opponent’s 2v1 staggering in the middle. Which means, the two Vancouver strikers covered Seattle’s centre-backs and pressed them to force the ball wide. Whilst In-Beom marked the centre-midfielder.

Once Sounders were forced to the wings and progressed up the pitch there, they met the second hindrance. Whitecaps aimed to close down the wings with second-line shifting, thus the midfield trio aggressively moved out to the ball side to block the way and isolate the home side’s players.

Having said that, time to time, Seattle were able to create longer possession os spells at the opponent’s half. However, they had to face with the opposition compact low block which limited Seattle’s actions to the wings. In these situations, the ball sided centre-midfielder joined the full-back to create numerically equal situation against Seattle’s winger and full-back.

In their wing play, Seattle frequently used positional rotations or oppositional movements to disorganise the oppositional defence but it was ineffective against’s Vancouver due to the fact that they did not follow the opponents that rigidly. Thus in overall, Seattle lacked the tool to create a breakthrough.

There was at least one situation where Seattle showed a possible way to exploit the away side’s defence. Due to the fact that Vancouver used strong shifting movement to the ball side to close down the ball side, it creates huge space on the far side. In the 10th minutes, Seattle takes advantage of that with a quick switch of play to the far side towards the advancing right back.

Nevertheless, it was way too rare to rely on that and was not a conscious action, but it would be a good way to use that weapon against a defence like this.

Furthermore, a few seconds later than the previous situation, Seattle showed another example of how to exploit Vancouver’s defence, although with a small but important flaw.

In here, the Seattle were isolated again on the wing but they managed to pull the full-back and the ball-near central midfielder out of position which creates some space that Shipp filled with a horizontal movement. However, the nearby centre-back was able to move out and track his run which denied that option.

As you may see, the problem was here that the striker occupied Rose instead of pinning back Godoy thus allowing Shipp to fill the vacated space without a marker.

As this analysis showed, both sides reduced the opposition threat and made hard to create scoring chances for the opponent. Statistically, it is also clear that both teams lacked the chances. Vancouver Whitecaps had 1.06 expected goals which are lower than their average (1.23 xG). On the other hand, Seattle Sounders had a 1.53 xG but truth to be told, it is the same as they average goalscoring record in this season (1.5 goals per match).