As we entered the quarterfinals at the FIFA Women’s World Cup, the battles were getting serious. Both Italy and Netherlands reached this stage with ease. However, now they faced each other. The game played out as an interesting battle although no one was able to grab the lead until the 70th minute. Then finally the Netherlands scored and won the game with two headers from two free-kicks.

Although it was a goalless draw until the final stage of the match, both teams showed an interesting strategy. This tactical analysis will reveal the crucial tactics and strategy for both sides.

Tactical Analysis of Italy vs Netherlands

This analysis will look into three major parts of the game.

On paper, Italy formed a 4-4-2 formation which means Bertolini switched system from the previously used 4-3-3/4-3-1-2. On the pitch, it was more of a 4-diamond-2 system than a flat midfield line. Thus she kept the previously used 4-3-1-2 structure, although there were changes in personnel. She benched Christiana Girelli and selected Valentina Bergamaschi for the right wing thus Valentina Giacinti could move to the centre-forward position, next to Barabara Bonansea.

On the other hand, Sarina Wiegman selected the same starting XI as she did in the last game, against Japan. With the usual 4-3-3 system. 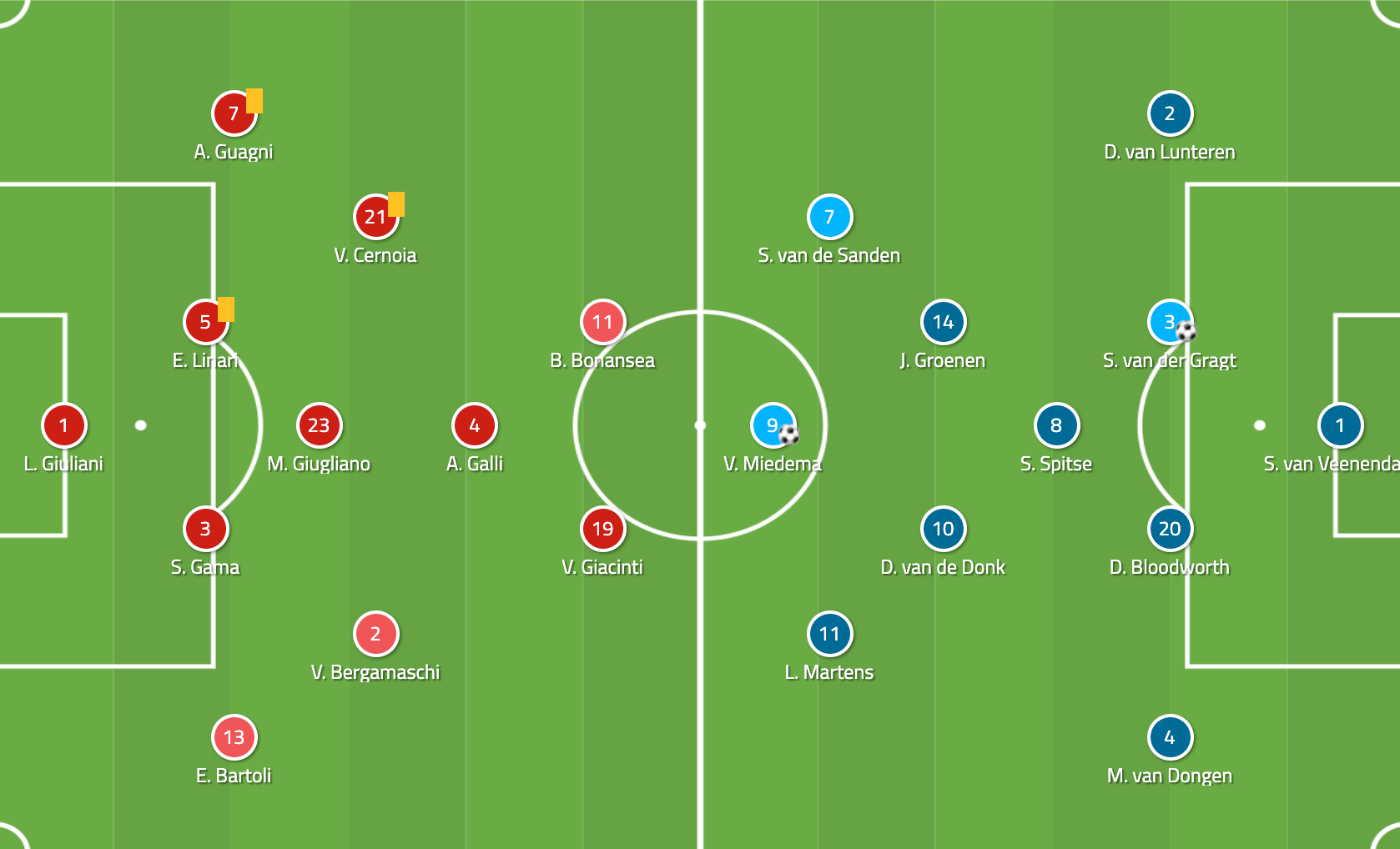 Netherlands dominating – Italy against the ball

This analysis has to start with the basic manner of both teams, which foreshadowing the focus of the piece. Italy took a more defensive approach thus did not try to dominate the possession against the Netherlands who generally likes to keep the ball. They have recorded an average 58,7% possession at the FIFA Women’s World Cup so far. Only Canada were able to dominate them, as they had the ball in 54% of the time in that game.

Therefore, the Netherlands dominated from the beginning while Italy tried to rely on their quick attacks. They did not sit deep, rather moved high to press the opposition build-up and prevent their progression. Italy’s high block was especially evident in the first half.

In pressing, Italy formed a 4-3-1-2 shape as Galli moved forward and occupied between the first and second line to mark the opposition deepest midfielder, whilst Bonansea and Giacinti focused on pressing the two centre-backs, therefore, theoretically the Netherlands’ 2-1 staggering in the middle would be covered.

As the image below shows, the two Dutch full-backs, Merel van Dongen and Desiree van Lunteren stayed deep during the early phases of the build-up to help the circulation while the wingers stayed high and wide. From the midfielders, the two eights, Jackie Groenen and Daniëlle van de Donk pushed forward thus only Sherida Spitse stayed deep to offer central passing option.

The goal was to force the opponent wide and with shifting they would trap them next to the touchline. Once the ball played to the flank, Italy were able to close down the wing. In here, Bergamaschi moved out to press the full-back, and Giugliano followed the dropping central midfielder. 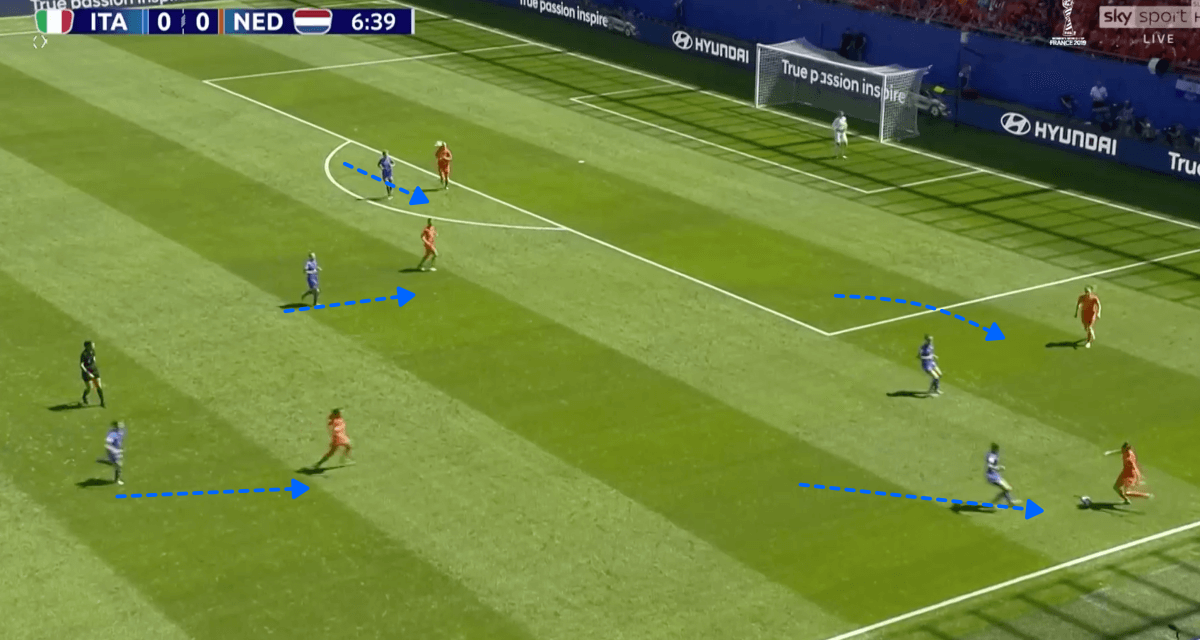 All that said, The Netherlands found a way to progress early in the game. As they circulated the ball through their back line, they used the full-backs to progress up the pitch. With moving the oppositional shape, they could find space on the far side, especially after a switch of play. It was a common pattern, that the far sided centre-back played the ball to the full-back on the other wing, however, the usage of the wing was asymmetric as the Netherlands mostly used the right wing where the full-back could create an advantageous situation with the central midfielder (Groenen) who dropped to the defensive half-space.

In this situation, Dominique Bloodworth (the left central midfielder) hit a volley to play the ball to Lunteren. Cernoia moved across to the left wing to press the full-back, but this stretched Italy’s second line which gave the opportunity for Groenen to move outwards without a marker and receive the ball in the wing. Then she tried to pass behind the opposition defence, towards Shanice van de Sanden.

As the game wore on, Giugliano shifted quicker in these situations, thus Italy’s second line became tighter. She was closer to Groenen who usually received the balls from the full-back, therefore, Giugliano was able to put pressure on Groenen.

When Azzurre’s pressing was outplayed, and the opponent reaches to the final third, the three central midfielders, Bergamaschi, Giugliano and Cernoia immediately fell back to protect the centre. They formed a narrow line in front of the centre-backs. Meanwhile, Galli dropped centrally, but Bonansea and Giacinti remained fairly high.

Furthermore, as I mentioned, the Netherlands used the right wing more often than the other areas thus Sanden often got the ball. Her teammates frequently targeted her with through balls to get behind the opposition shape and make a cross, but in the second half, she got a different task. After the break, she mostly tried to cut inside to make a shooting opportunity similar to Robben.

To close down the Dutch wingers, Italy’s full-backs were tasked to move out of position and press the winger on the ball. Of course, this stretched their last line as the centre-backs stayed in position. In order to cover the gap between the centre-back and the full-back, the ball near #8 shifted there and protected the space. It was a necessary move as the Dutch side tried to exploit that space. On both wings, the central midfielders (Van de Donk and Groenen) moved outwards to help the wingers. Therefore, without the centre-midfielder, The Netherlands would create a 2v1 situation against Azzurre’s full-backs. Or even Van de Donk or Groenen attempted to exploit that space with underlap runs.

In here, Cernoia moved to the left half-space to cover the space between Elena Linari and Alia Guagni. While in the box, Italy were able to maintain a numerically advantageous situation (3v2) against Vivianne Miedema and Lieke Mertens. 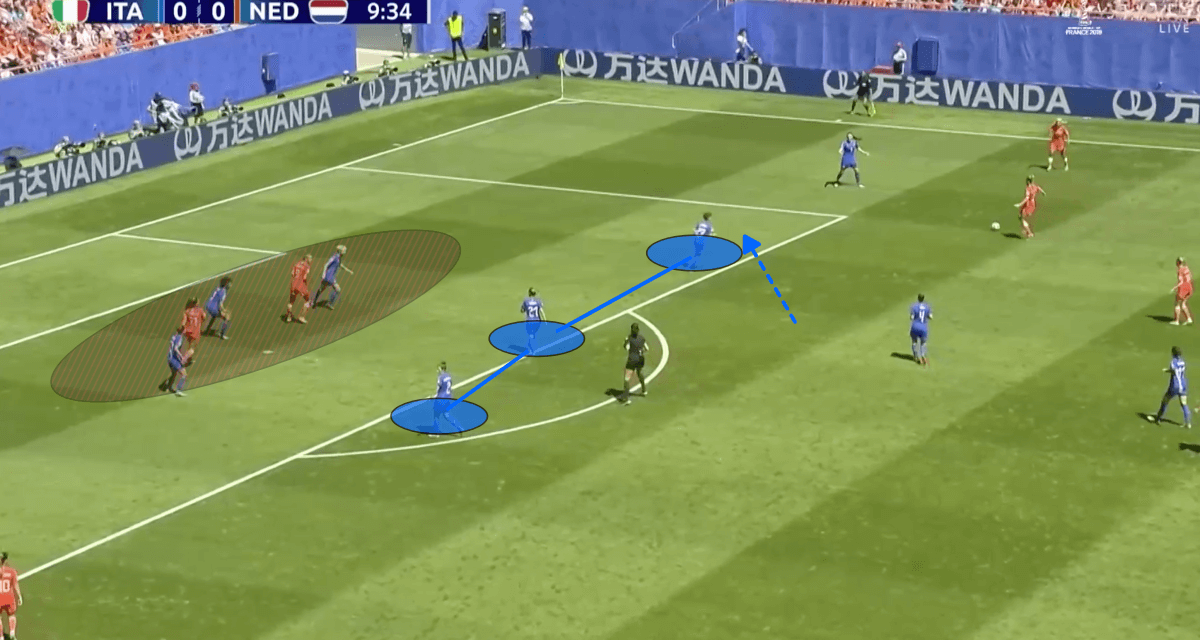 Thus against Azzurre’s deep block, the Netherlands struggled to break through. Therefore they failed to create scoring chances.

Once Italy tried to build out from the back, they immediately faced a huge obstacle as the Netherlands stayed up high and mirrored their structure to cover all the passing options – forcing Italy wide and trapping them next to the touchline.

As the image shows above, Miedema and Sanden formed the first line, while Martens dropped to the midfield to block Bergamaschi with her cover shadow. Van de Donk could occupy a bit higher to mark Giugliano. Groenen stuck to Cernoia and Spitse followed Galli. Therefore, Sara Gama had no option on the ball. She had to volley the ball forward.

Moreover, after eliminating the build-up, Italy still had the counter-attack as a weapon to create chances. However, Wiegman asked her team to aggressively counter-press after losing the ball. They recorded a 4,37 pass per defensive action rate which is one of the best in the FIFA Women’s World Cup (on average they have a 7,21 PPDA).

In the situation below, after Bergamaschi received a pass, the Dutch player rushed on her to press whilst the nearby teammates squeezing the space. This forced Bergamaschi to bad ball control, thus the opponent was able to win the ball back right after they lost it. 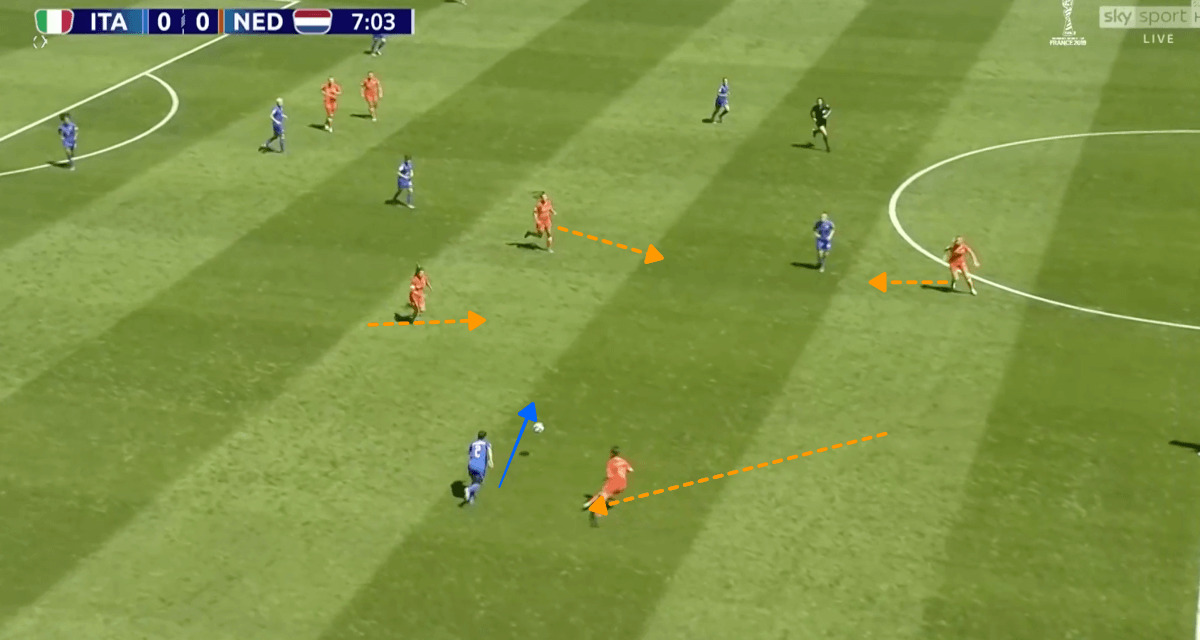 Again, another situation where The Netherlands forced the opponent into a hasty pass which was not precise. Thus they win the ball back with ease. 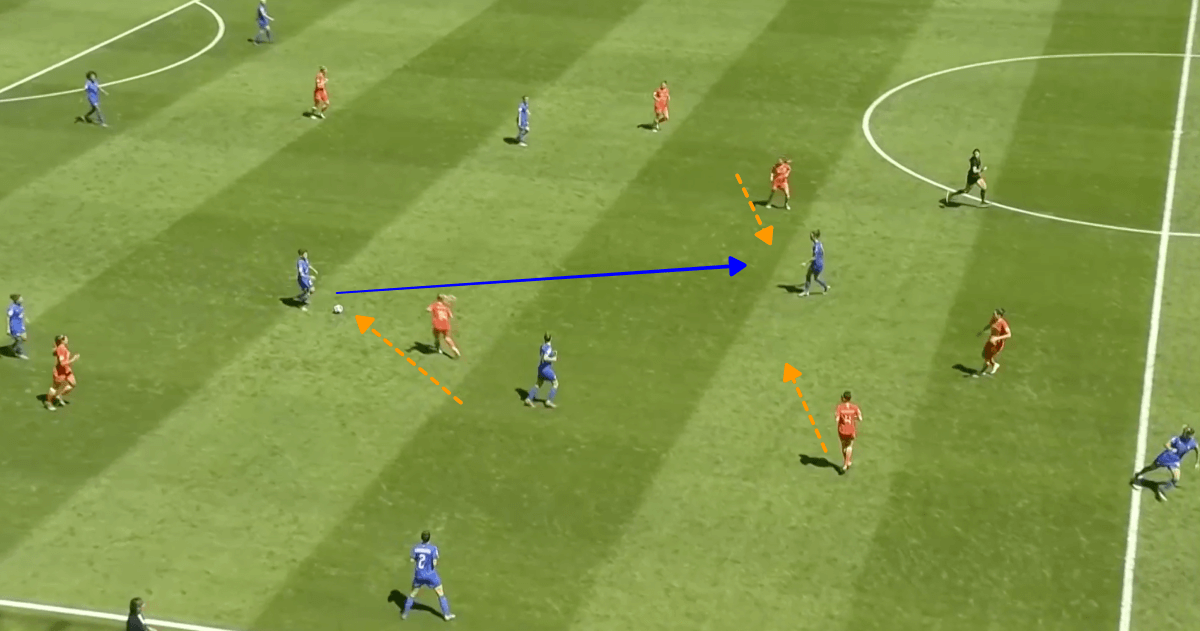 Even though Azzurre were able to reach to the final third, they often became isolated on the ball and made hasty decisions, therefore they really struggled to create scoring chances. It was evident in statistics, as they only produced 0,67 xG.

As this analysis showed, both sides brought quality to this fixture but the journey for Italy is ending. However, the good performance at the World Cup could shepherd Italian Women’s football to a better track than they were in the last twenty years.

Meanwhile, Netherlands continue this magnificent run and will face Sweden in the semifinals.