In some senses, an international tournament such as the World Cup does not really get going until after the opening round of matches. Nerves and excitement then abate and we tend to see teams concentrate more on executing their respective game plans. Those game plans could, of course, very much depend on the outcome of that opening match. This Group E match between the Netherlands and Cameroon, for example, saw two sides with vastly different outlooks for the tournament facing one another. The Netherlands came into the tournament as one of the favourites with a number of their players being contracted to big clubs throughout Europe. Cameroon, on the other hand, were very much an unknown quantity.

The opening round of Group E fixtures were low scoring compared to the other groups in the tournament with the Netherlands securing a hard-fought 1-0 win over New Zealand and Cameroon losing 1-0 to a strong Canada side. A win then for the Netherlands would likely see them through to the last 16 where they are likely to play one of England or Japan.

In their match against New Zealand, the Netherlands struggled at times to break down a stubborn defensive block, their tendency to look to attack in wide areas, via the excellent Lieke Martens and Shanice van de Sanden, whilst dangerous was negated by their oppositions defensive block. In the end, they broke through but not with any ease. Against Canada, we saw Cameroon impress with their work defensively whilst struggling to provide any real goal scoring threat. There was a feeling going into this match that we would again see the Dutch looking to break through a stubborn defensive resistance.

This tactical analysis will show how the Netherlands managed to win the match 3-1.

There was one change for the Netherlands with the Barcelona defender Stefanie van der Gragt dropping to the bench having picked up a knee injury with Anouck Dekker of Montpellier coming into the team in her place. Even with a slight change of personnel, there would be no shift from the traditional 4-3-3 that we associate with Dutch football.

Cameroon, on the other hand, lined up in their first match in a 5-4-1 shape with a clear emphasis on maintaining a deep and compact defensive block. Their star attacking player, the wide forward Gabrielle Onguene was the only attacker to retain her place as the others dropped down to the bench.

One of the recurring trends of this World Cup so far has been the tendency for teams to rely on wing-orientated attacking play in order to break down stubborn opposition. The Netherlands are no exception to this although given the sheer quality of their excellent wide forwards, the aforementioned Martens and Van de Sanden this should come as no surprise. Both wide players were well supported by Kika van Es and Desiree van Lunteren from the fullback positions.

With Cameroon choosing to adopt a medium passive block they were passive with their pressing when the Dutch were looking to build out from the back and progress the ball forward. This meant that the first pass from the Dutch was often clean and free although the two Dutch centrebacks tended to prefer to access the fullbacks with these passes instead of looking centrally.

From there the Dutch would look to progress the ball in towards the final third although this first pass had already triggered the Cameroonian press. When they were able to move the ball quickly out to Martens and Van de Sanden and have these players isolated 1v1 against a defensive player we saw the Dutch look far more dangerous than when the build up was slow. 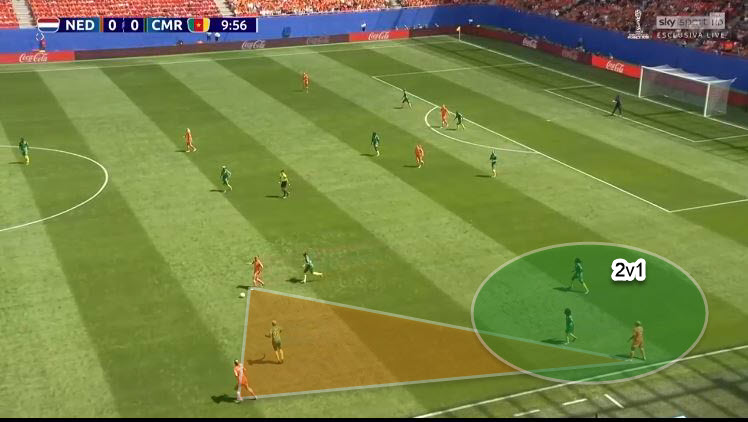 We see in this example the types of positions that the Dutch looked to create as they entered the final third. The three Dutch players on the ball near side of the field are in a triangle – typical Dutch positioning! – with the intent being to allow them to progress the ball through and in behind the Cameroon defensive line. In these areas, we saw Cameroon work to create numerical overloads of their own to prevent the dangerous wingers getting the ball in positions where they were isolated against a single defender.

These positional structures, however, certainly were a key theme in the attacking game model of the Dutch. 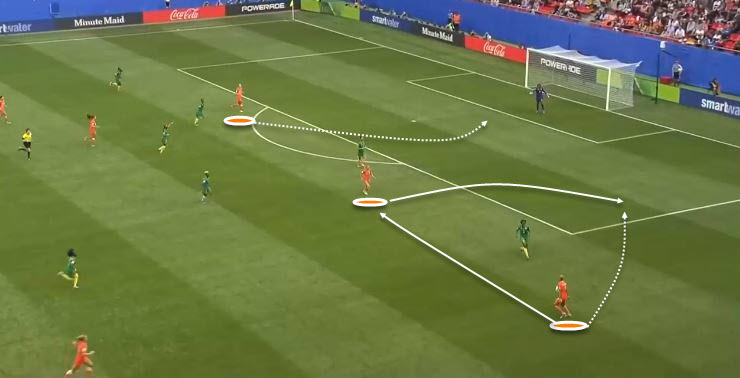 This was the build-up to the first goal from the Dutch and came at the end of a poor period of play with both sides unable to effect a meaningful transition from defence to attack. Finally, a ball of quality was played out to the right-hand side and Van de Sanden was isolated against a fullback. These are the situations that the Dutch looked to create throughout the match and the wide player was able to play a quick one-two that released her beyond the defensive line where an easy pass found the dangerous Miedema in the six-yard box.

While the defensive block and initial press from Cameroon was relatively passive the same cannot be said of the ball-orientated press as the Dutch crossed the halfway line. Throughout the match and across the width of the pitch the African side pressed and harried the Dutch. This prevented the favourites from ever getting into a comfortable rhythm within the game and ended up with a lot of mistakes being made by the Dutch in possession of the ball.

In this image, the Dutch were able to progress the ball forward to the halfway line without any real pressure from the opposition. As soon as the vertical pass was played into the midfield, however, the situation changed drastically. The receiving player has her back to goal, facing the direction of the ball, and as the ball is played through we see two Cameroon players immediately collapse on the ball to press from different directions. This allows Cameroon to win the ball and transition into the attack themselves. 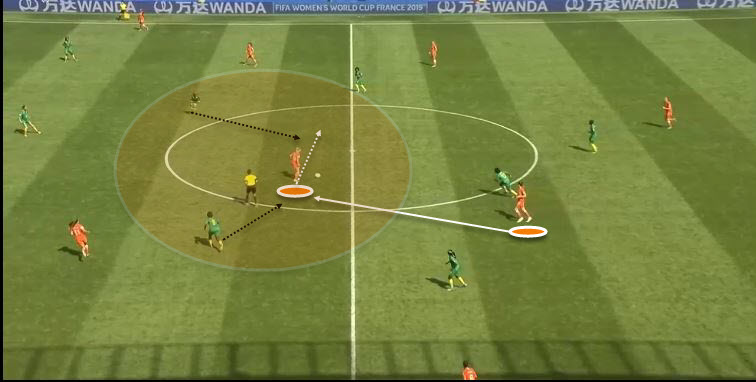 Once again in this example, we see a Dutch player able to receive the player in the opposition half and in a pocket of space. As she takes possession she looks to spin out to play to the Dutch right-side. As soon as the pass was played from the defensive player into midfield, however, we again saw two Cameroon players converge on the Dutch player from different angles. Once again this pressure was enough to force a mistake and Cameroon came away in possession of the ball.

With the Netherlands struggling to break down the Cameroon defensive block through their wide attacks, and despite Cameroon denying their opponents space and time in their half of the field, I still believe that there were central spaces that the Dutch could have better exploited.

Often we saw the Dutch with a free player as they progressed the ball through the midfield. This would usually be the excellent Arsenal midfielder Danielle van de Donk who was key for the Dutch in the attacking and defensive phases. There were other times, however, when runs were made to occupy central spaces and ignored as the ball was played out into the wide areas. 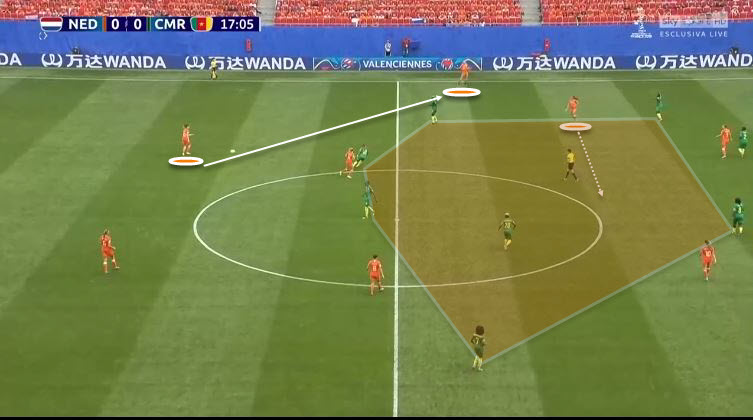 Here we see the Dutch in a familiar position with comfortable possession on their defensive line. Once again there is no pressure from Cameroon in these areas as they wait for the ball to be progressed forward. A run is made from the left half-space into a large pocket of central space. This run could have been easily accessed by a reasonably simple vertical pass from the defensive player in possession of the ball. Instead, once again, we see the ball played out to the fullback and the opportunity to create an advanced platform from where they could have played is gone.

The same kind of thing can be seen here as the Dutch have a 3v2 numerical advantage in the centre of the midfield. This overload could once more be accessed, although a single pass from the defender is difficult, and a combination through one of the other midfielders could access space in behind the Cameroon defence.

That the Dutch game plan revolved around the width and attacking in wide areas is without a doubt. Often when the central midfielders were in space they would not even call for the ball and would instead move wider to create positional structures to allow the ball to be played through the wide channels.

In this game varying the initial pass from defence between one to the fullbacks and one into central areas would have forced Cameroon to retain a more compact shape centrally. Instead, they were able to shade over to the wide areas time and time again to deny the Dutch the space that they needed to play in these spaces.

In the end, a 3-1 win for the Netherlands was extremely flattering. They failed to make their greater quality count against a Cameroon side that worked extremely hard and created chances in the attacking phase. The technical quality of the Arsenal forward Vivianne Miedema told in the end and her two goals, both extremely well taken, ended up being the difference in the end.

So, Netherlands qualify for the last 16 and on the balance of their first two group games, they probably deserve it if only just. Given the undoubted quality and experience that they have throughout their squad and the fact that they are reigning European Champions more was expected of this Dutch squad. Then again they may find their form as the tournament progresses and go far into the latter stages.