After a formulaic first round of matches of the FIFA Women’s World Cup, the Group F table reflected the projections made by many before the tournament. Last week, Thailand were on the ill-fated end of a historic 13-0 loss to the United States. The Americans, along with the hosts France, are favoured to win the competition. Sweden meanwhile battled a heavily defensive Chilean side until a weather delay in the 72ndminute forced a temporary stoppage. When the match eventually continued play, Sweden scored twice late to secure an ultimately earned three points.

Sweden and Thailand meet in matchday two of the tournament. The Blågult will be looking to affirm a place in the Round of 16 early, particularly considering a meeting with the United States is next on the docket. Thailand must win or draw to have any hopes of advancing, but as this tactical preview will show, the Chaba Kaew may see more of the same against the Scandinavian side.

Sweden manager Peter Gerhardsson configured his tactically flexible squad into a 4-2-3-1 against Chile. Nilla Fischer, who primarily plays as a centre-back but can also play deep in midfield, was positioned in her preferred spot. Caroline Seger and Kosovare Asllani controlled possession in midfield, and World Cup debutant Stina Blackstenius began at striker.

While the first three of these four players are often considered the core of Sweden, it would not be surprising to see any of them on the bench against Thailand, as the tactical game model would stay the same. This would allow him to rest a number of his key players ahead of a challenging third group stage match against the United States. 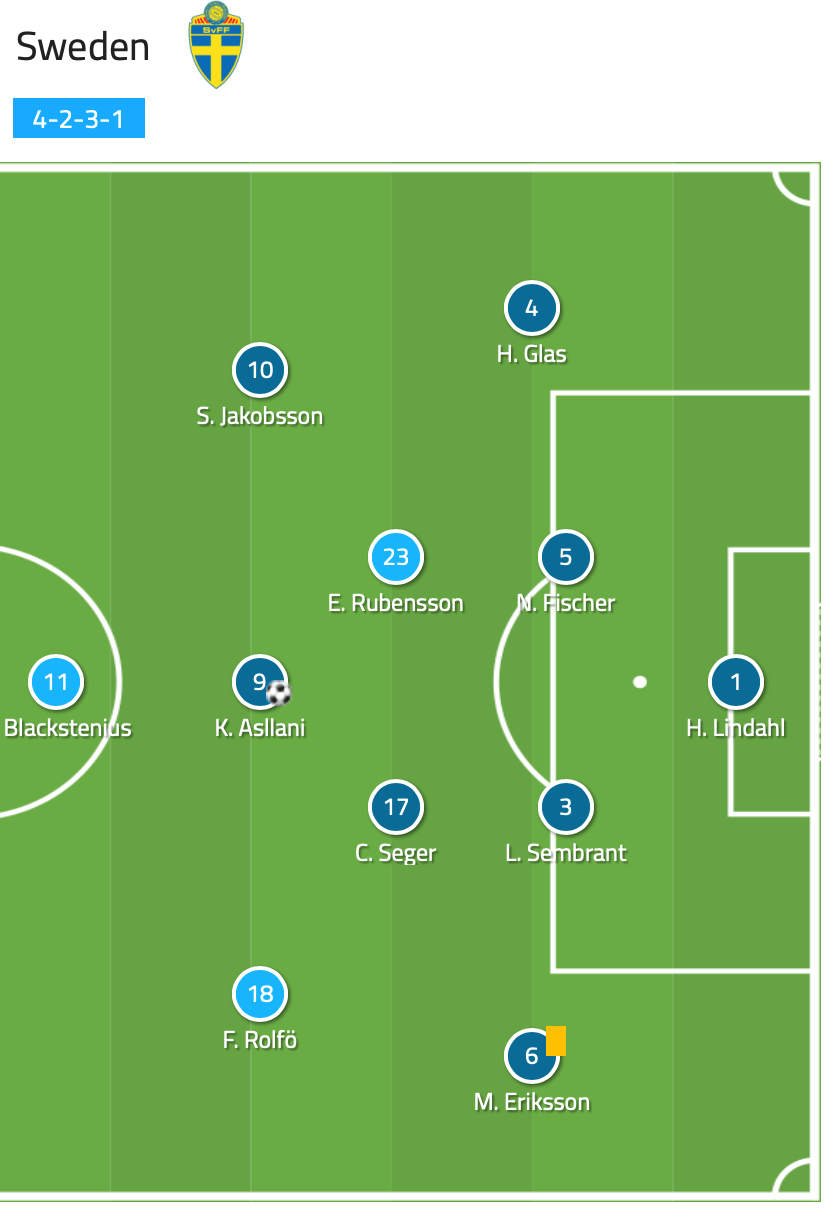 Gerhardsson could opt to play a more experimental starting lineup than this eleven, as Sweden are comfortable in a variety of formations and systems.Thailand manager Nuengrutai Srathongvian may not have much choice in adjustments of the personnel of his starting lineup. He could, however, decide to adjust his tactics to a more attack-resistant press, as the traditional low block system utilised against the United States had little effect.

One common tactical theme we’ve seen this World Cup is the strategic low or deep block setup against technically-superior opposition. A number of teams have deployed this system to a level of success, including Italy in their upset victory over Australia. This method was also evident in Sweden’s and Thailand’s first matches.

The Chaba Kaew utilised this tactic in their first match, but the technical and physical advantages of their opponents were too overwhelming. The United States were able to connect on pass-and-move sequences deep in Thailand’s half by exploiting the wide zones around the block, which opened up space in dangerous areas. 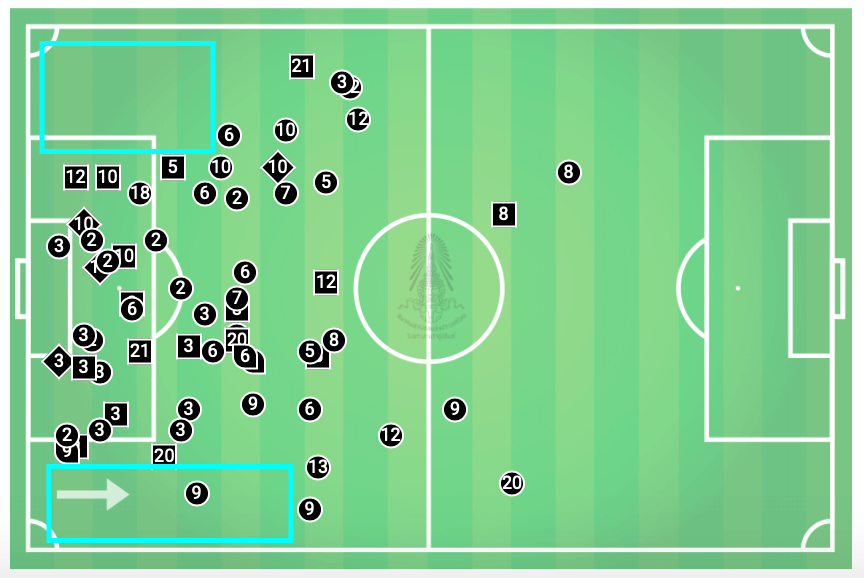 Thailand’s recoveries against the United States. The emptiness of the blue boxes highlights how Thailand struggled to halt opposing attacks in the wide areas.To combat this issue in the wide areas, Thailand committed more defenders wide, but this simply switched the exploitation of space to the half-spaces. 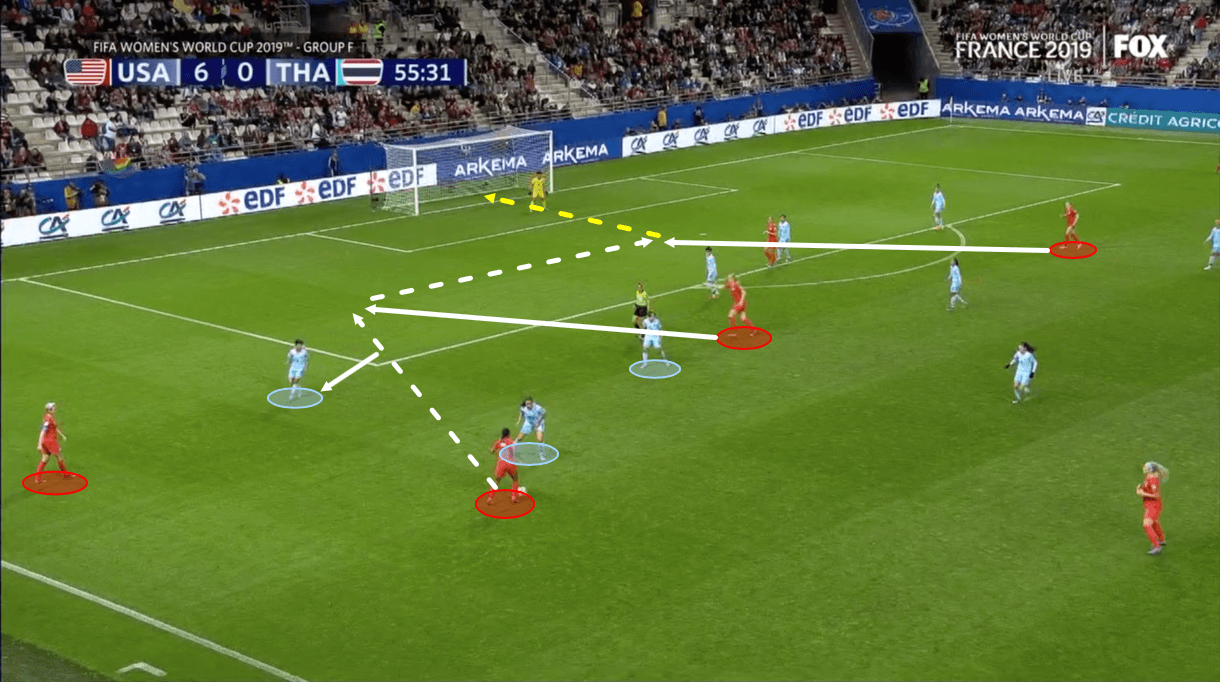 Megan Rapinoe’s positioning wide left pulled Thailand’s right-back out of position. Crystal Dunn then connected with Samantha Mewis’ run into that space, which resulted in an assist for Mewis.In the other Group F matchup, it was Sweden who controlled possession throughout, often sitting comfortably on the ball in or around Chile’s half. 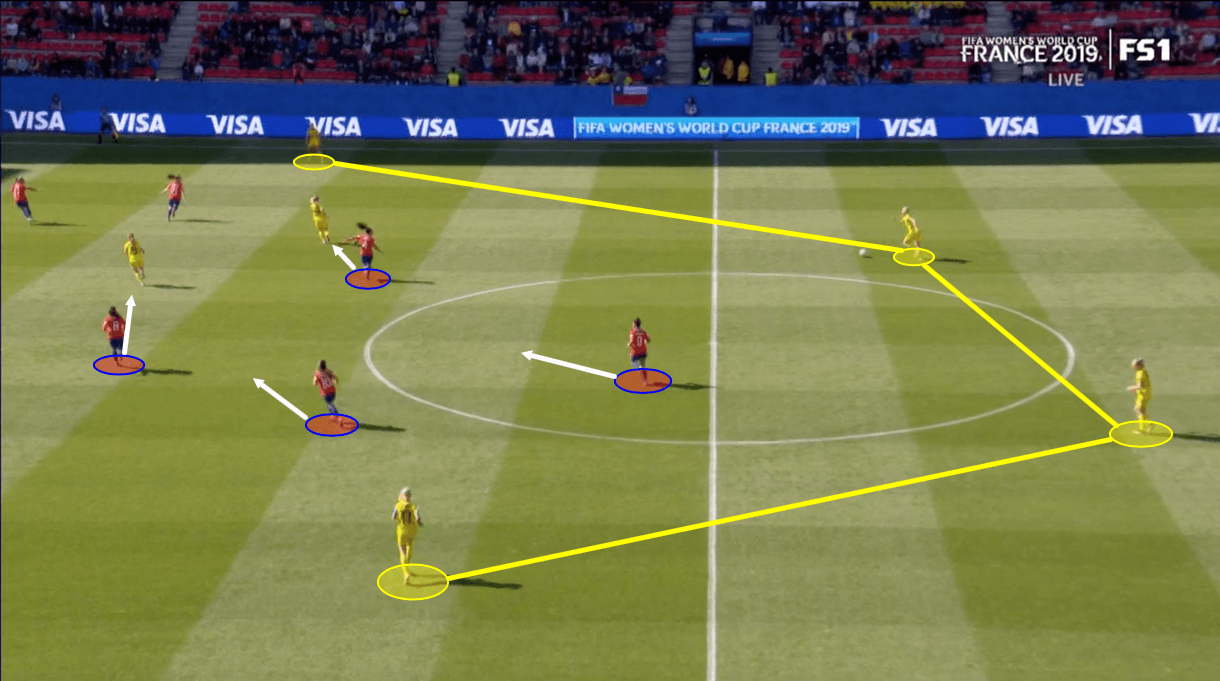 Even at the start of the match, Chile opted to forego any pressure on Sweden’s back line and chose to defend deeper in their own half.The South American side generally positioned themselves in a low block, although they were more capable of defending heavy attacks than Thailand, largely thanks to Camila Sáez and keeper Christiane Endler. 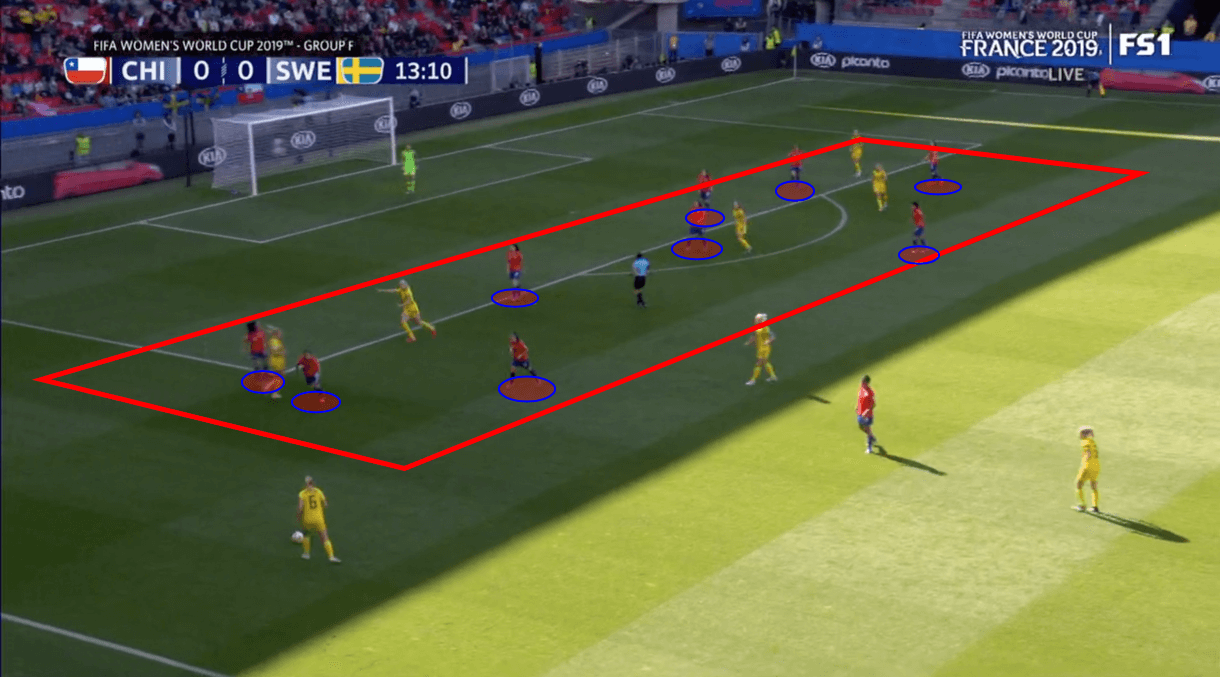 Chile in a low block against Sweden.

The planned attacking advantage of playing in a low block is to lull the opposition’s back line into playing too far forward, thus exposing space behind them to break into a counter-attack. Sweden, however, resisted Chile’s counter-attacking attempts effectively through smart and powerful defensive plays. 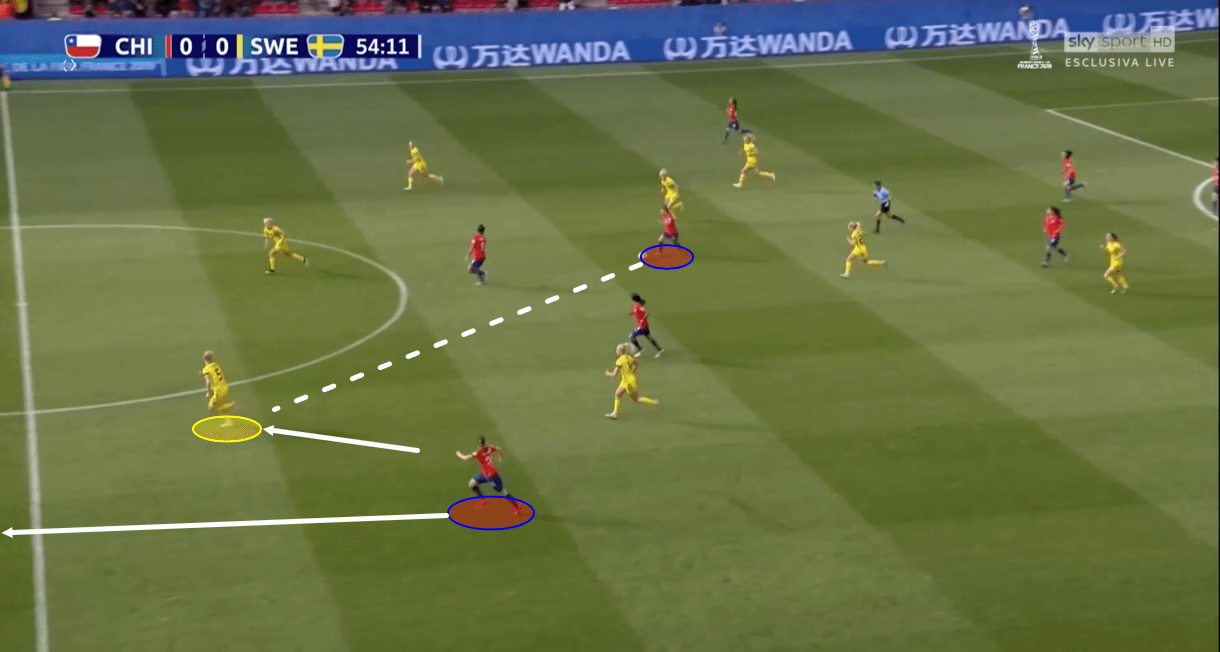 Chile began a number of counter-attacks against Sweden, but they often ended early due to inaccurate passes or defensive plays by Sweden’s back line. Here, Fischer makes a potentially goal-saving stop by intercepting a dangerous through ball.Fischer is one of the best defenders in the world despite her age, and if she is chosen to start in this match, Thailand will have little hope of getting past her.

As stated, the methods the United States used to break down Thailand’s low block were tactics in which spaces around and through the block were exploited through runs and positioning. Unfortunately for Thailand, Asllani specialises in this pass-and-move style of play. She uses her exceptional vision off the ball to make runs behind the back line, and with the ability to play across the front line, she will almost certainly make her mark against Thailand. 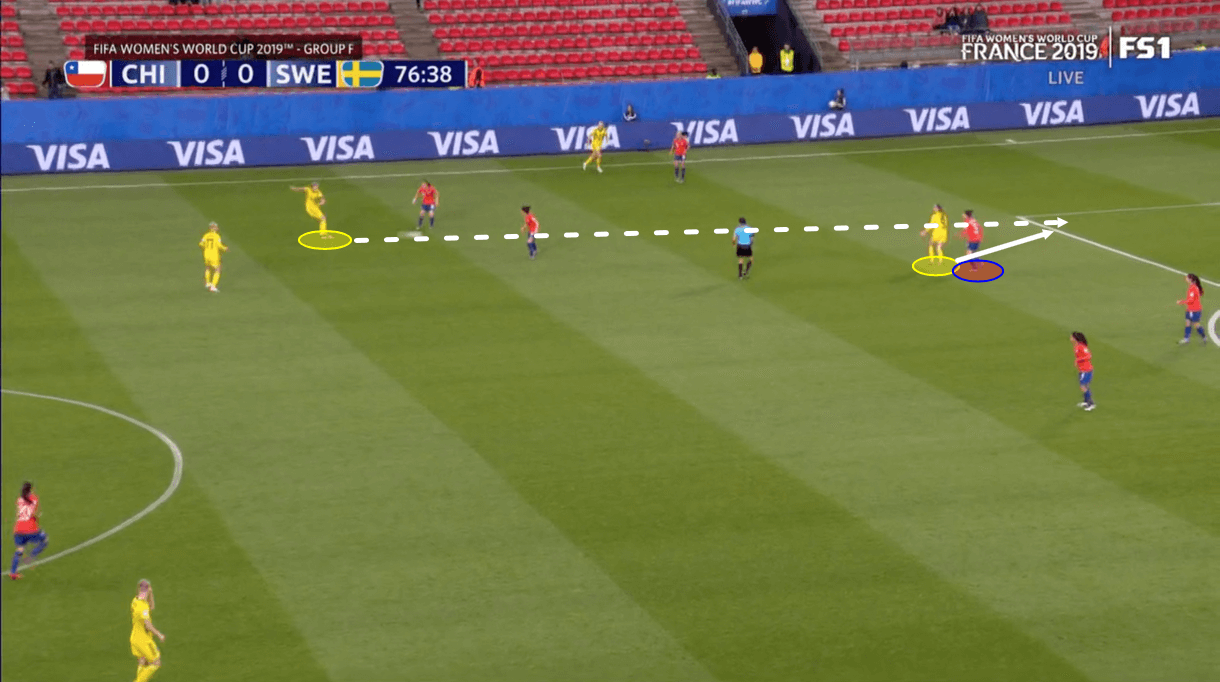 In the wide left side of the pitch, substitute Lina Hurtig hits a through ball to Asllani, who is intelligently positioned on the front outside edge of the defender, which allows the through ball to continue as Asllani turns and receives the pass facing the goal. 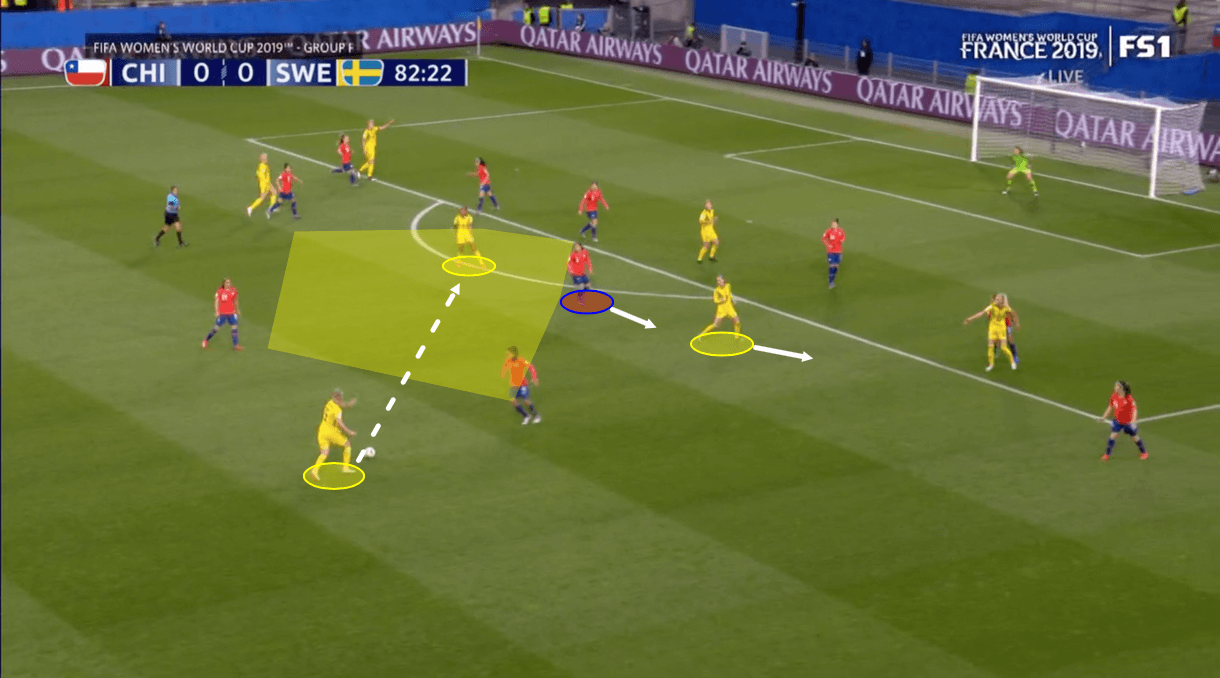 Asllani shifts wide in the right half-space, luring the deep-positioned defensive midfielder wide. This gave Fischer space to pass in to Madelen Janogy at the top of the box. 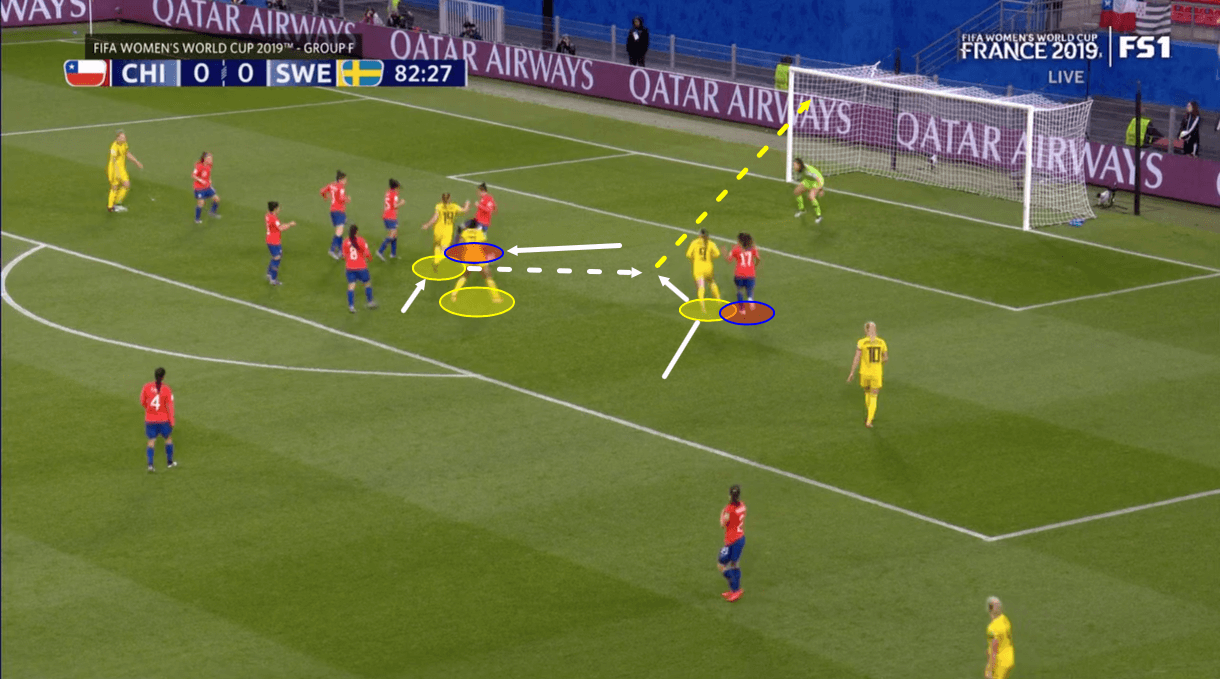 After receiving the following pass from Janogy, Anvegard dribbled into a tight space, which again pulled out a defender. Asllani made a run into this opened space behind the back line.Sweden’s first goal was the result of runs pulling defenders out and away from their designated areas, a tactic the United States thrived in executing against Thailand.

One struggle for Sweden early was a difficulty finishing chances. It is worth reiterating again how exceptional Endler was in Chile’s goal, but striker Blackstenius’ finishing is normally exceptional, and she will likely only improve off what was a rough World Cup debut.

After Sweden scored their first goal, Chile turned up the pressure by sending more players out to press Sweden in possession. Sweden stifled this press and exploited the more open spaces in the now diminished block. 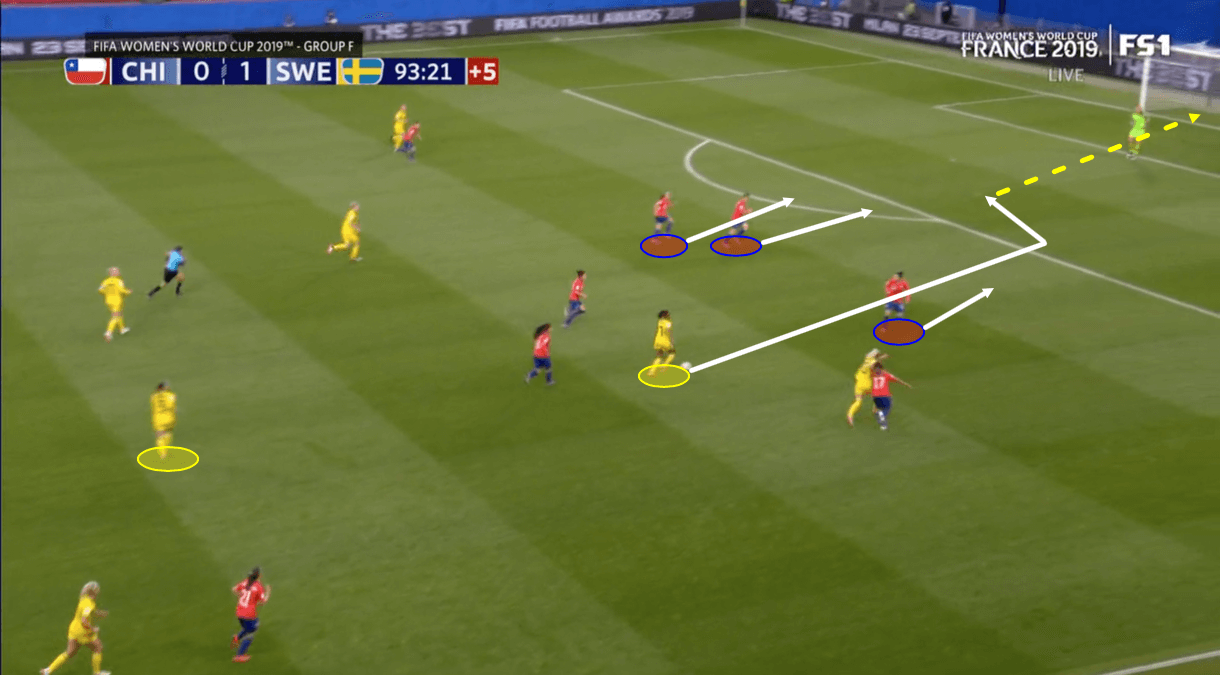 After Asllani tackled the ball away from a Chilean attacker, the ball fell to the feet of substitute Janogy, who took advantage of the open spaces in Chile’s defensive third and produced an early World Cup goal of the tournament contender.

When these two teams meet at the Allianz Riviera, there is a high probability that Sweden will come out on top based on the analysis. The lack of defensive organisation and discipline from Thailand is something Sweden is more than capable of taking advantage of, and Sweden’s defensive strength and offensive versatility could engulf the opponent not too dissimilarly to the Thailand-United States match.