The United States started its quest for a fourth FIFA Women’s World Cup in Reims against Thailand. The United States Women’s National Team was forced to wait until the final match of the opening set of matches but had an opportunity to ease themselves into competition against a vastly overpowered Thailand squad. While the USA had won all five of its warm-up matches before departing for France, outscoring their opposition 22-3, Thailand had struggled in their run-up to this match. The Chaba Kaew lost both of its warm-up matches, by a combined scoreline of 9-1. Tactical analysis will aid in deciphering the first match of the FIFA Women’s World Cup for the United States.

Many were expecting this match to be an early test of the United States’ ability to convert possession into goals against a team that would look to defend. As it turned out, this wasn’t a problem for the USA as they scored three goals in the first half. After half-time, Thailand fell to pieces, and the USA was able to slice through their defensive lines with ease. Four goals between the 50th and 56th minute turned this match into a rout and left Thailand shell-shocked. Another six goals in the final 15 minutes meant the USWNT won 13-0 in the most one-sided match in World Cup history.

Jill Ellis’ team lined up in a 4-3-3, with Alyssa Naeher getting the start in goal. The only change over the United States’ first-choice lineup came in defence, with defensive stalwart Becky Sauerbrunn sitting out the match with a minor quad issue. Taking her place alongside Abby Dahlkemper was Julie Ertz, who was the starting centre-back during the USA’s successful 2015 World Cup campaign, but she has most recently been featuring as the starting defensive midfielder. With Ertz missing from the midfield, Samantha Mewis got the start.

Nuengrutai Srathongvian started his squad in a 4-2-3-1. Leading the line was Suchawadee Nildhamrong, also known as Miranda Nild in the USA. She currently attends University of California and was voted the UCLA Offensive MVP in 2017. Also, she’s been one of the brightest additions to the Thailand team and has helped add another dimension to the Thai attack.

Tactical Analysis – Keys to the match

This tactical analysis will show how the United States was able to attack with ease through the wide areas, even as Thailand tried to maintain numerical superiority in the area. We will also look at the problems Thailand had in getting out of their defensive zone. Finally, we will look at the change with Julie Ertz positioning that allowed the United States to turn a 3-0 victory into a 13-0 rout.

Thailand tries to shut down wide areas but fails.

Two of the most dangerous players for the United States are the wingers, with Megan Rapinoe on the right side and Tobin Heath on the left side. Thailand looked to commit numbers to ensure that these players were closed down immediately. As we can see in the image below, Tobin Heath received the ball out wide on the right side. As Thailand left-back Sunisa Srangthaisong challenges Heath, two players move wide to ensure that the American winger can’t get into open space. This takes place only two minutes into the match, but it was a constant feature of the Thailand defence plan.

As Thailand setup to defend deep, with all of their players getting behind the ball, the United States looked to attack with width. They were able to accomplish this in several different ways. One of the most common methods of attack was to keep both Rapinoe and Heath along the touchlines. The wingers positioning meant that the opposition full-backs were left in the wide areas, and opened up gaps in the half-space. Rose Lavelle and Samantha Mewis, the most advanced of the United States midfielders, were able to exploit this space. Thailand also moved additional defenders out to shut down the American wingers, creating more space for the midfielders to move into.

In the image below, we can see that Kelley O’Hara has the ball on the right touchline. Tobin Heath is making the run in front of her, staying in the wide area. This opens space in the channel for Rose Lavelle to move into, as she’s able to get behind Ainon Phancha.

Another option for the USA to exploit the space in wide areas was for the wingers to tuck inside. By moving inside, the wingers would drag the opposing full-backs into central areas and leave gaps outside for the United States’ full-backs to run into. As we can see from the image below, Tobin Heath has moved centrally, into the channel between the Thai centre-back and full-back. Kelley O’Hara has moved into an advanced position along the touchline, and Abby Dahlkemper played a quick diagonal pass to her.

The United States prevent Thailand from escaping their defensive zone.

As the United States controlled possession, Thailand was forced to retreat deeper into their defensive zone. They were consistently pressed into their defensive third of the pitch, and when they were able to recover the ball, they had few options higher up the pitch to release the pressure. Their only option up the pitch was Nuengrutai Srathongvian, but she struggled against the physical presence of Julie Ertz and Abby Dahlkemper.

As we can see from the image below, Thailand has recovered possession on the edge of their box. Unfortunately, we can see eight defenders behind the ball with another two behind the ball off the screen. The only available option was Nuengrutai Srathongvian, and the attempted ball towards the striker was easily gathered by Dahlkemper, allowing the United States to maintain the pressure and continue their attack. 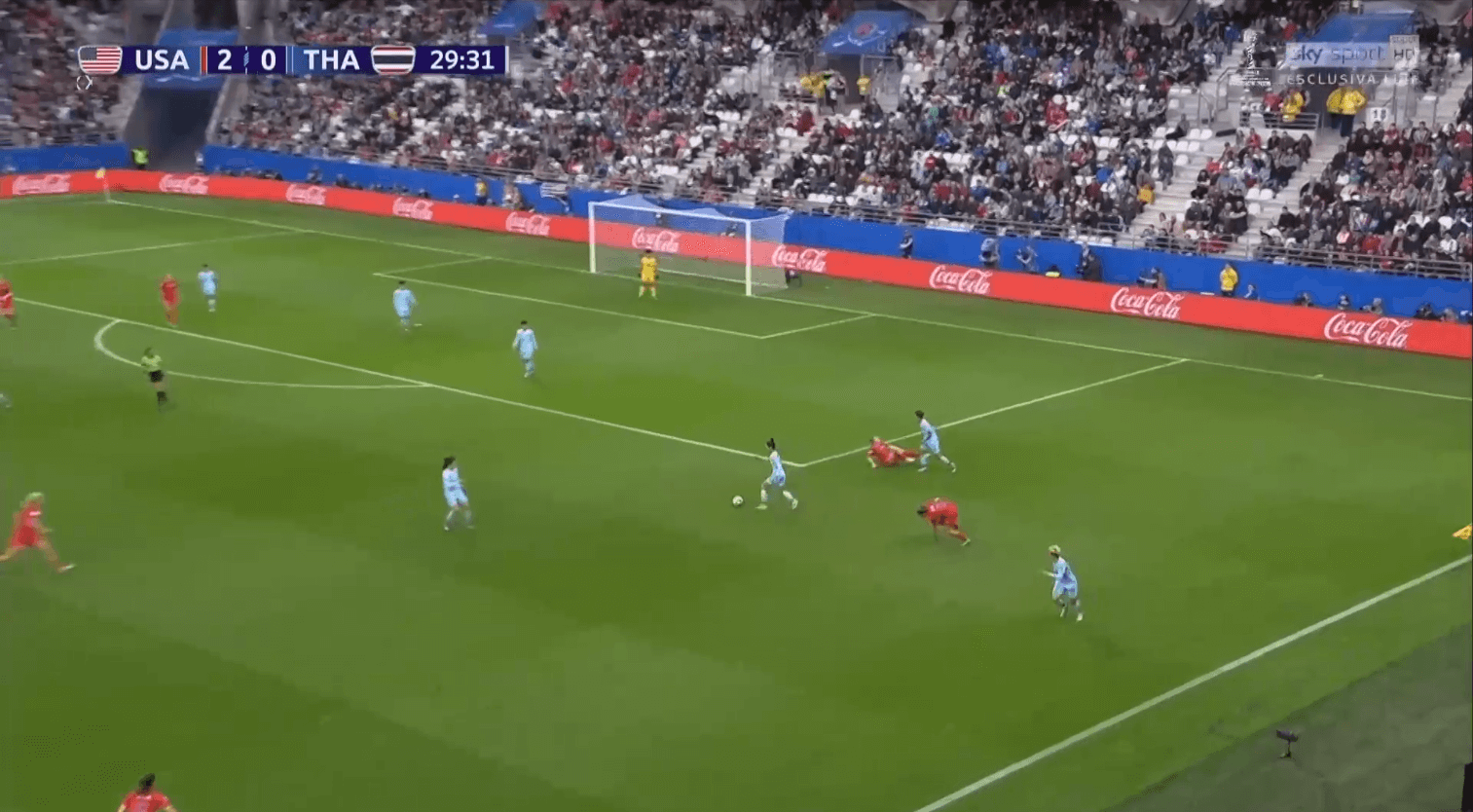 Thailand struggled against a committed press from the United States, but the task for the Americans was made easier by the lack of options up the pitch. The result was that Thailand’s average length of possession was less than six seconds. These short spells with the ball didn’t allow the Thailand defence much time to recharge before they were again forced to defend deep in their defensive third.

Julie Ertz makes a change that turns a victory into a rout.

In the 32nd minute, after the United States scored their third goal, Julie Ertz went to the technical area to speak with Jill Ellis. After this conference, Ertz changed her positioning in possession for the United States. With Thailand playing so deep and having so little of the ball, it was decided that there was little need for the two centre-backs to stay back to guard against counter-attacks.

In possession, Julie Ertz was stepping into the midfield and taking up a defensive midfield position. This is normally her position in the team, so she is effective in this role, and it showed in the second half of this match. She was able to add another body into the midfield for the United States, and this also allowed the USA to have better access to counter-press after losing the ball.

With Ertz taking up the defensive midfield role, Lindsey Horan was able to move into a more advanced position and work off of Alex Morgan. Morgan, who had an excellent game with five goals, used her ability to find space to cause Thailand problems throughout the match. As we can see in the image below, Morgan can drift off the shoulder of the weak-side centre-back to find the space to head in an easy goal.

With only Abby Dahlkemper defending, the USWNT were now attacking the Thailand defence with nine players. The addition of Lindsey Horan higher up the pitch meant that Alex Morgan had additional support. The US was now as dangerous attacking through the middle of the pitch as they had been attacking through the flanks, and it only took five minutes in the second half before the goals started flooding in.

It’s hard to take much away from such a lopsided contest, but the first half showed that the United States could deal with teams who are determined to play defensively. The addition of Rose Lavelle has added more creativity into the midfield, while the lethal wing play of Tobin Heath and Megan Rapinoe makes the USWNT a nightmare to defend. The questions coming into this World Cup for the United States has been all about the defence, and none of them was answered in this match against a side that offered so little going forward.

Thailand struggled against a team that has more resources and talent, but the scoreline was deceptive. In the first half, Thailand never looked likely to take a point from this match, but there was little to preview what would happen in the second half. Hopefully, they can address the mental fragility that led to them collapsing in the second half and improve over the next two group stage matches.