In the FIFA Women’s World Cup 2019 second group match, Canada played against New Zealand. In the first match, Canada took all the three points against Cameroon thanks to Kadeisha Buchanan’s goal. However, their manager Kenneth Heiner-Moller claimed his team did even better in this match.

On the other hand, New Zealand tended to play counter-attacking football in the Women’s World Cup. They lost against the Netherlands in the first group game. Their manager said the mood is still here. However, they were outplayed by Canada. In this tactical analysis, we will show you how Canada dominated the game.

Canada played in a 4-4-2 formation when they were defending. When they attacked, they played with three at the back. They had only one change from the last game. Jayde Riviere replaced Allysha Chapman. Their key player and captain Christine Sinclair also started the game.

New Zealand started with the same team. They played in a 4-4-2 formation. C.J. Bott, Rebekah Stott, Abby Erceg and Ali Riley formed the defensive line. At the upfront, Sarah Gregorius and Rosie White played as forwards.

In my tactical preview, I mentioned a good counter-press should be executed against New Zealand. Canada used this approach to dominate the game. A good counter-press compresses space, forces your opponents to play the ball quickly. As a result, it is more likely the ball was not accurate. Then, the defenders could win the possession back easily since they could read the pass easier.

The below image was an example of Canada’s counter-press. New Zealand goalkeeper Erin Nayler saved a shot and she threw the ball to Riley. The Canada players reacted very quickly to counter-press their opponents. The below four red lines showed how the Canada players marked the closest players around the ball. Riley did not take the risks to pass back to the central defenders or midfielders. Betsy Hassett was freed, but the body shape of Riley would make this pass difficult, too risky. As a result, Riley was forced to play the ball into the red area where was full of red shirts. The Canada players won the ball back easily throughout the game. They had 70% of possession throughout the game. 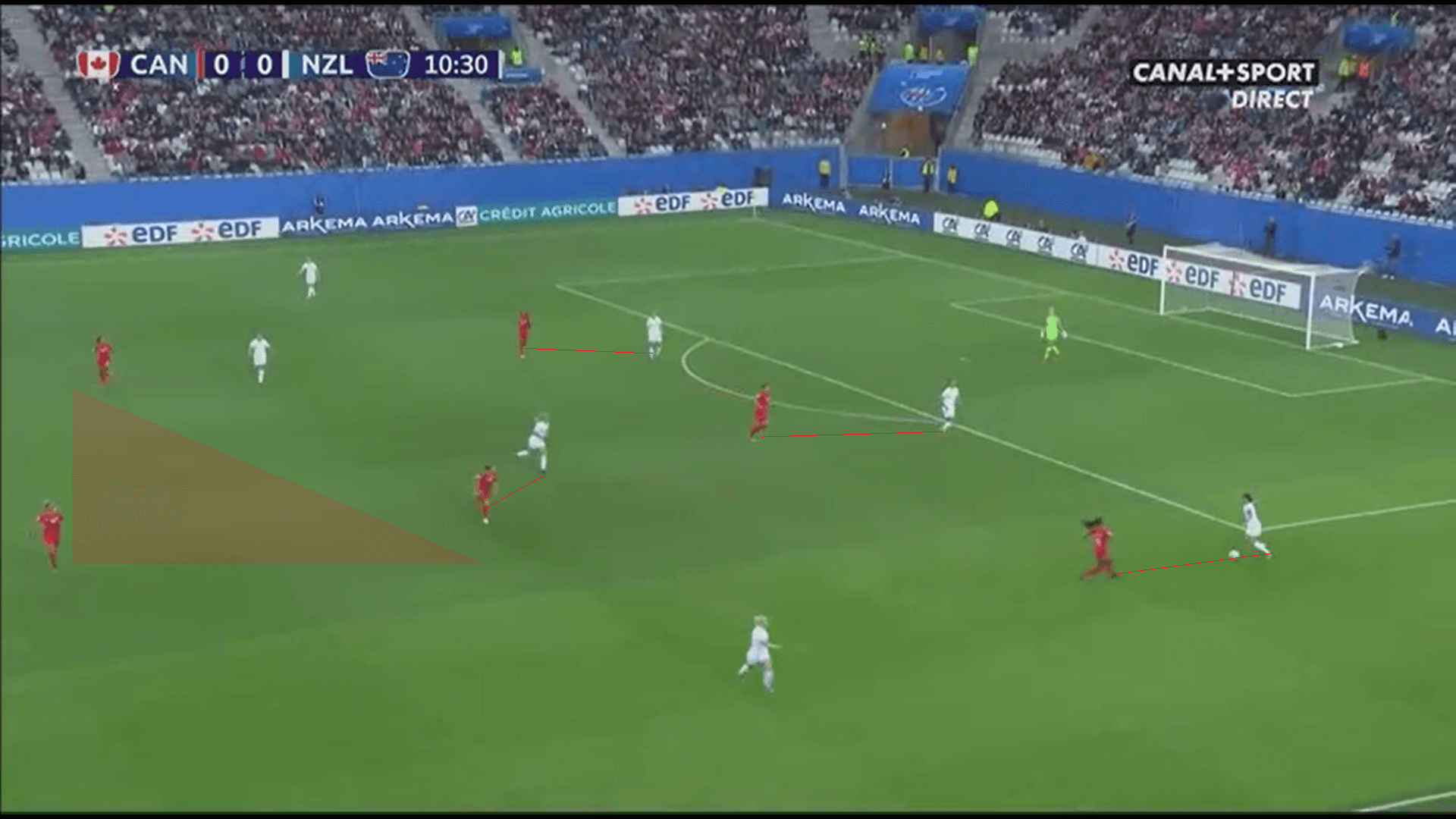 Canada’s dominance at the back

Another factor that contributed the above stat (70% Canada possession in the game), was their dominance at the back. Canada did not want to take the risk to lose the ball in their backline. Therefore, they tried to maintain an absolute numerical advantage in their own half. The New Zealand players tried to sit back and maintain the 4-4-2 defensive shape, they did not press high in this game. As a result, Canada players kept the ball easily.

The below image showed Canada’s shape. When attacking, they tried to play in a 3-1-4-2 shape. The three centre backs stay at the back with Sophie Schmidt. Given the spaces between New Zealand’s midfield line and forwards were huge. Schmidt usually stayed between the lines to provide support for the back three. As a result, these four players could easily outplay two opposition forwards. Then they spread the ball to sides.

However, this image also provided some hints about the connection problems between Canada players in the first half. I will address the problem below. 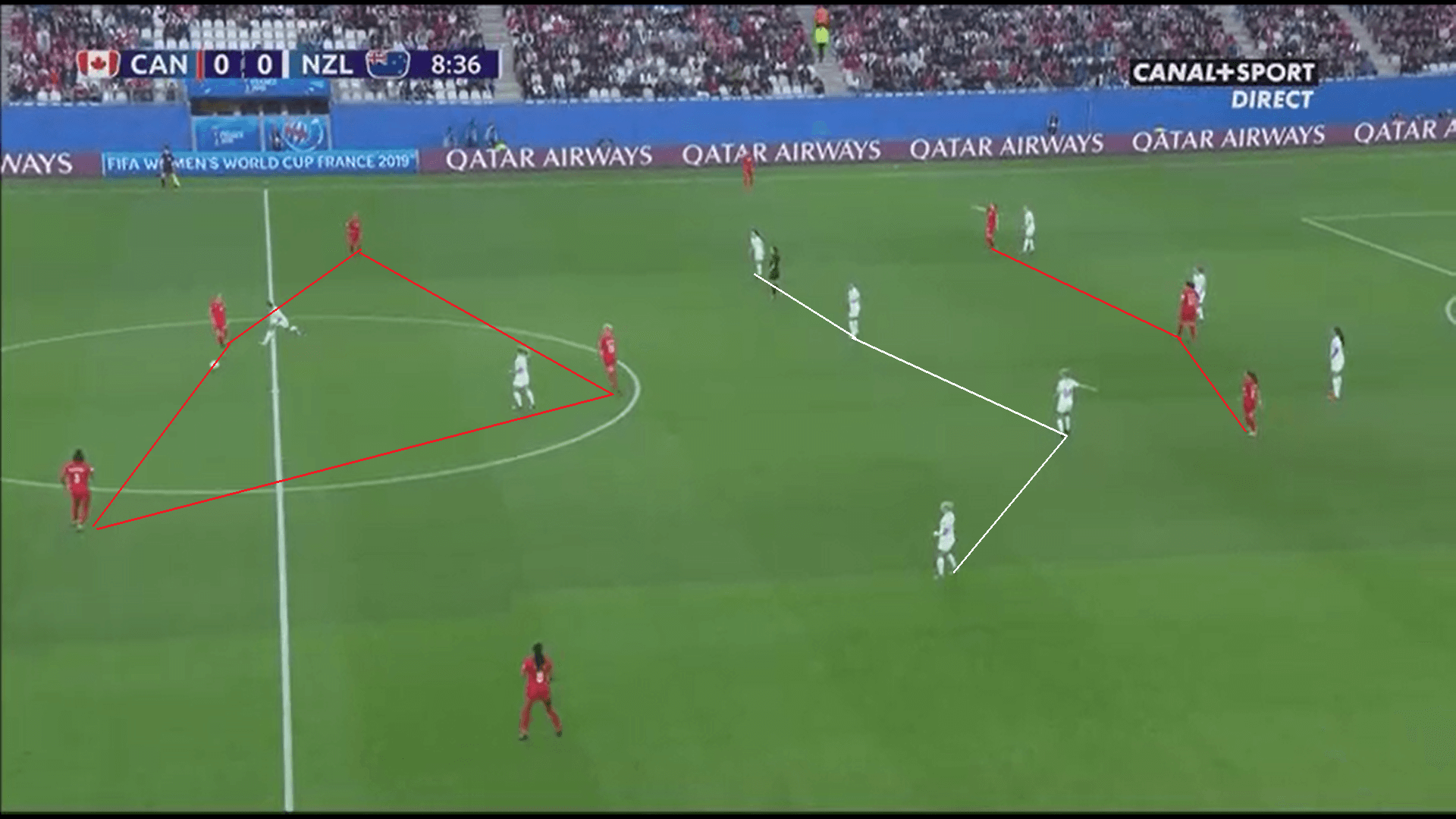 Canada attacked in a 3-1-4-2 shape in this match. They used their wingbacks to provide the width and stretch the pitch. They intended to gain an advantage at sides against the narrow 4-4-2 of New Zealand. However, the plan did not work the best in the first half due to the lack of connections between players. In the build-up phase, the Canada players did not penetrate the centre. Instead, they spread the ball to sides early. Their two midfielders stay behind the New Zealand midfield line. However, they did not exploit the half-spaces. The players were lack of connection and the ball was difficult to move smoothly.

The below image explained the case. The three centre backs and a pivot still formed a quadrilateral as mentioned. Both wingbacks stayed wide at the pitch. Two players stayed behind the midfield line of New Zealand. The two forwards stayed at the shoulders of defenders. However, the players stayed too far away from each other and they were lacking passing options. There forwards seldom drop deep to help the build-up. Nichelle Prince received the ball at the right flank. She had no options. The red area should have been occupied, but there were no players. As a result, she was trapped and she lost the ball. 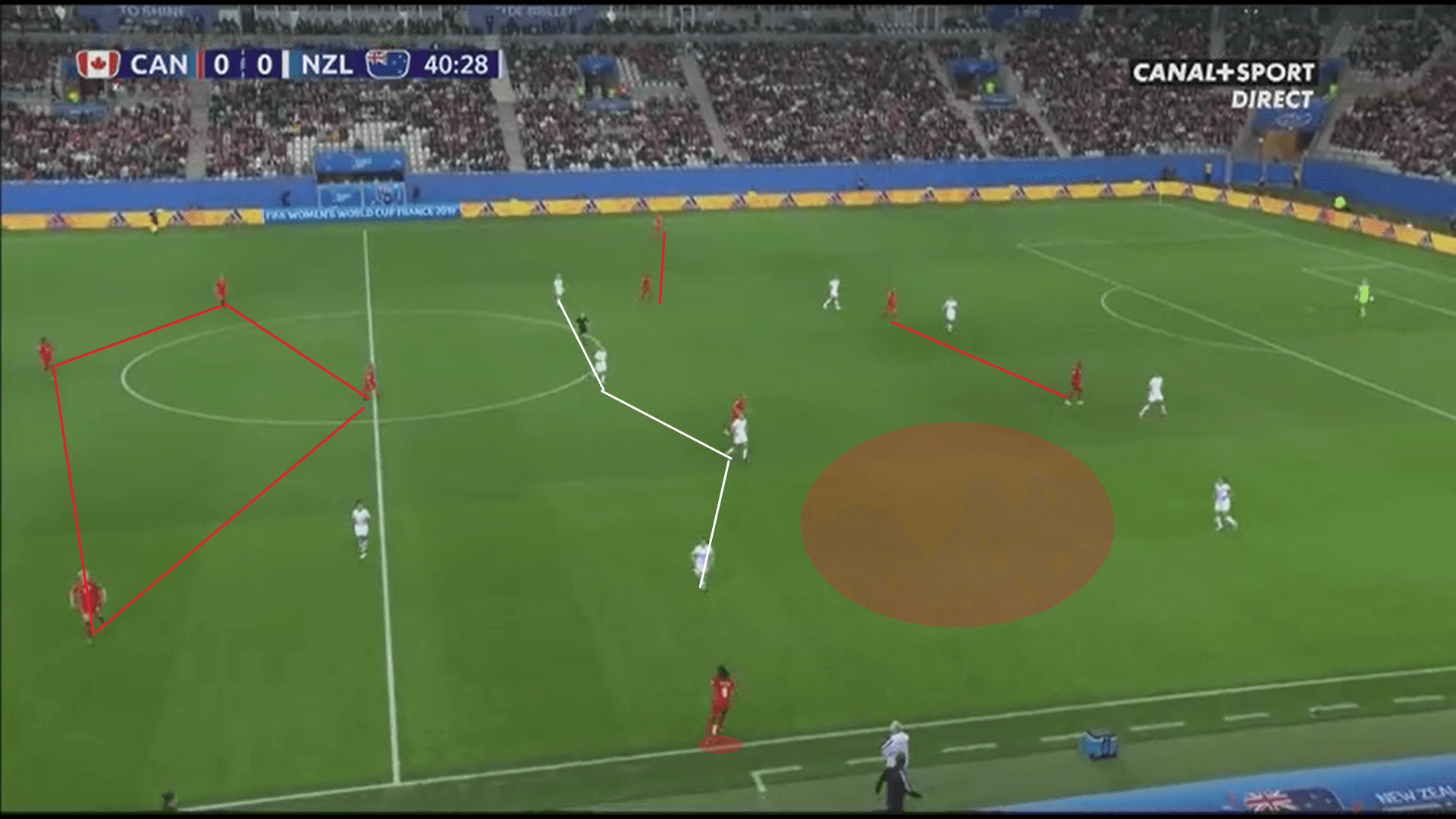 When the New Zealand players defending in a 4-4-2 shape, they tried to shut the flanks. As mentioned in my tactical preview, the New Zealand players would move to a side at the flank to prevent overload. In some occasions, they could gain a numerical advantage when defending at flanks as well. They would like to force the opposition to pass the ball back. They tried to use their left back, a centre back, a midfielder and a winger to form a quadrilateral at a side. This hopefully could contain the opposition.

The below image illustrated the defend approach of New Zealand. Canada had two players occupying the right flank. As a result, four New Zealand players were going to defend them. Then, this became a 2v4 situation. Riley, Erceg, Katie Bowen and Hassett stepped out to compress the space down the flanks. They eliminate the options to pass and spaces to dribble. As a result, Riley gained possession back thanks to the cooperation of her teammates. This was the New Zealand approach to defend at sides. However, please note the spaces between defenders. 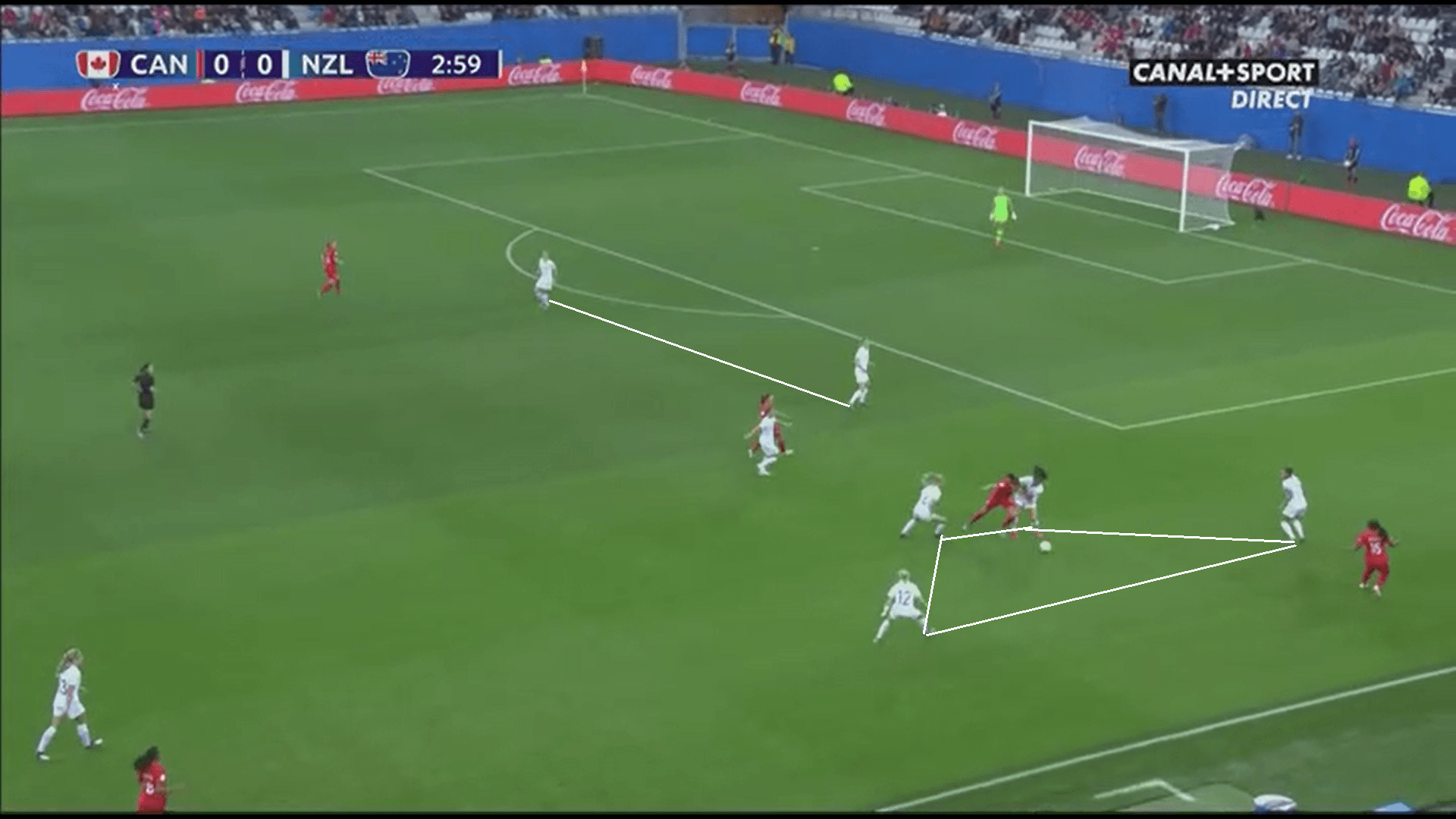 The above-defending approach of New Zealand could effectively prevent overloading at sides. However, the drawback was the space between the defenders became bigger. This approach required their centre backs to step out of their defending. It broke the defensive shape and required the rest of the defenders to adjust their position. Therefore, in my tactical preview, I mentioned the spaces at the half side could be exploited. If any white shirt shut down, it could be dangerous.

The below image reflected the situation. At that moment, the ball was at the left flank. The four New Zealand players stepped out to form the quadrilateral again. They intended to compress space at that flank and prevent overload. There were two red shirts at the left flank. Their forward Sinclair stayed at Erceg’s blindside. However, this time Erceg did not move near to her partner Stott. As a result, the red highlighted space was generated between the defenders. Sinclair read that space and run towards that space, receiving the pass. Then the Canadian attempted a shot and blocked this time. However, it was an issue to note. 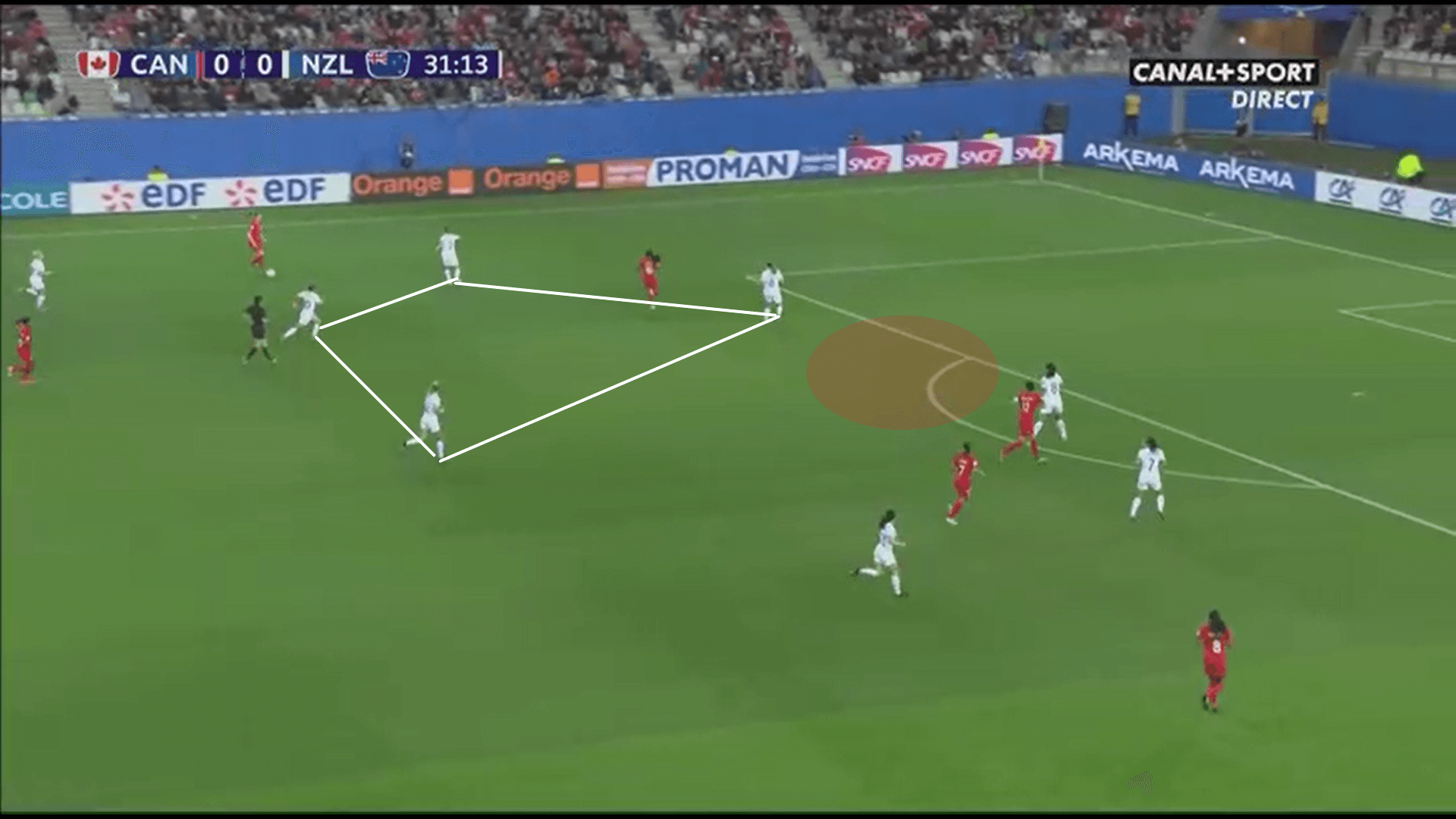 In the second half, Canada Women’s team manager Heiner-Moller instructed his team to play faster. Also, he amended the team to repeat the problems happened in the first half. It became the key of their win. In order to make the players link to each other, they need not wait for an maintain the shape. It helped them to exploit the spaces behind the oppositions. I mentioned the Canada midfielders stayed behind the New Zealand midfield line. Without central penetration, the opponents could maintain their shape easier. In the second half, the midfielders could drop on occasions. The defenders would also try to play some straight pass to find the midfielders.

The following two photos showed how the goal came from. The Canada players dropped to help build-up. Then, they did not intend to keep possession and maintain their shape. They tried to score and hit the opponents directly. Although all four nearest passing options of Canada players were eliminated, the positioning of the Canada midfielders drew all the markers out. At the same time, they generated space since the opposition defensive line pushed up to cooperate with the press. Under this circumstance, the ball carrier did not panic and read the space behind the New Zealand defensive line. She played the ball towards that area. Then, the defensive shape of New Zealand was broken since they had to close off Prince. Jessie Fleming received the cutback and scored. 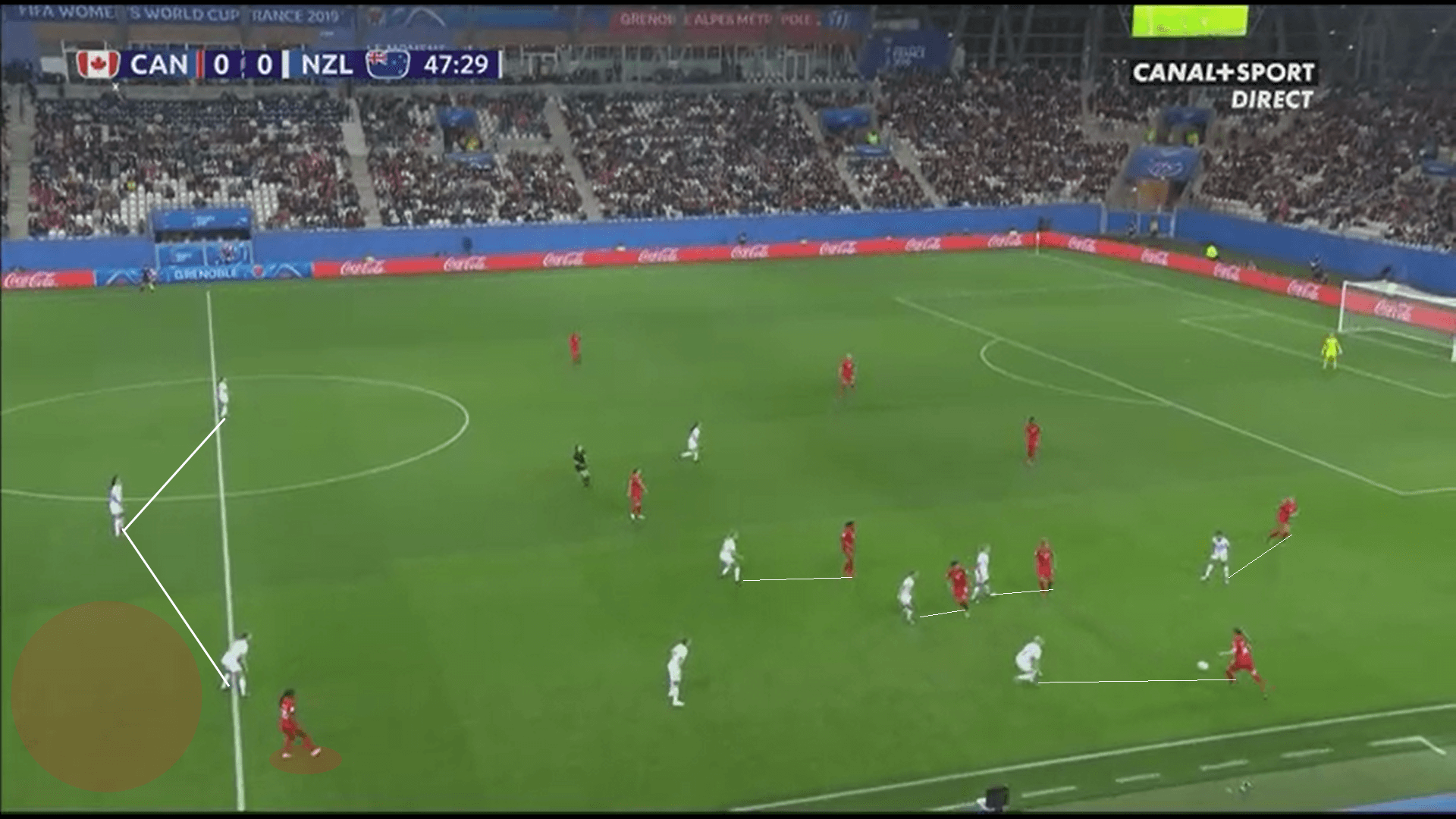 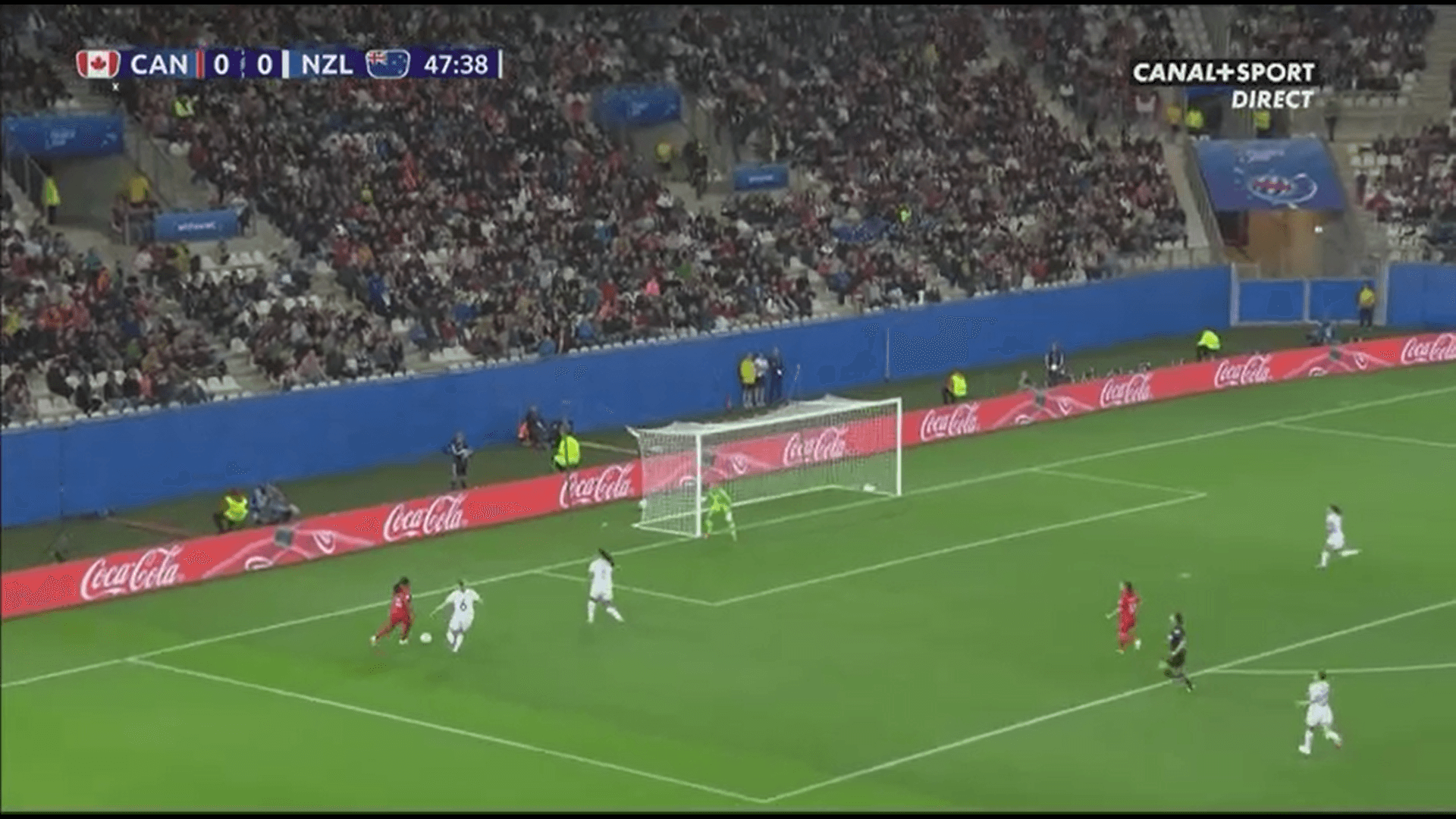 To improve the linkage between when attacking, Canada players stayed closer to each other in the second half. This could provide passing options to each other and force the opposition to defend narrow. As a result, the wide players could be left free to hit the sides.

The following image reflected the changes after the player positioned themselves better. After a straight pass to penetrate between the lines, the three Canada players stay close to each other. One was pushing the opposition defensive line deeper, another was forcing the opposition to defend narrow. Although eight New Zealand were defending, the area they covered was narrow, not even half of the pitch. As a result, their wide player Janine Beckie was left free. The red area showed how much space she got. Eventually, Beckie drifted forward and created another golden opportunity to score. 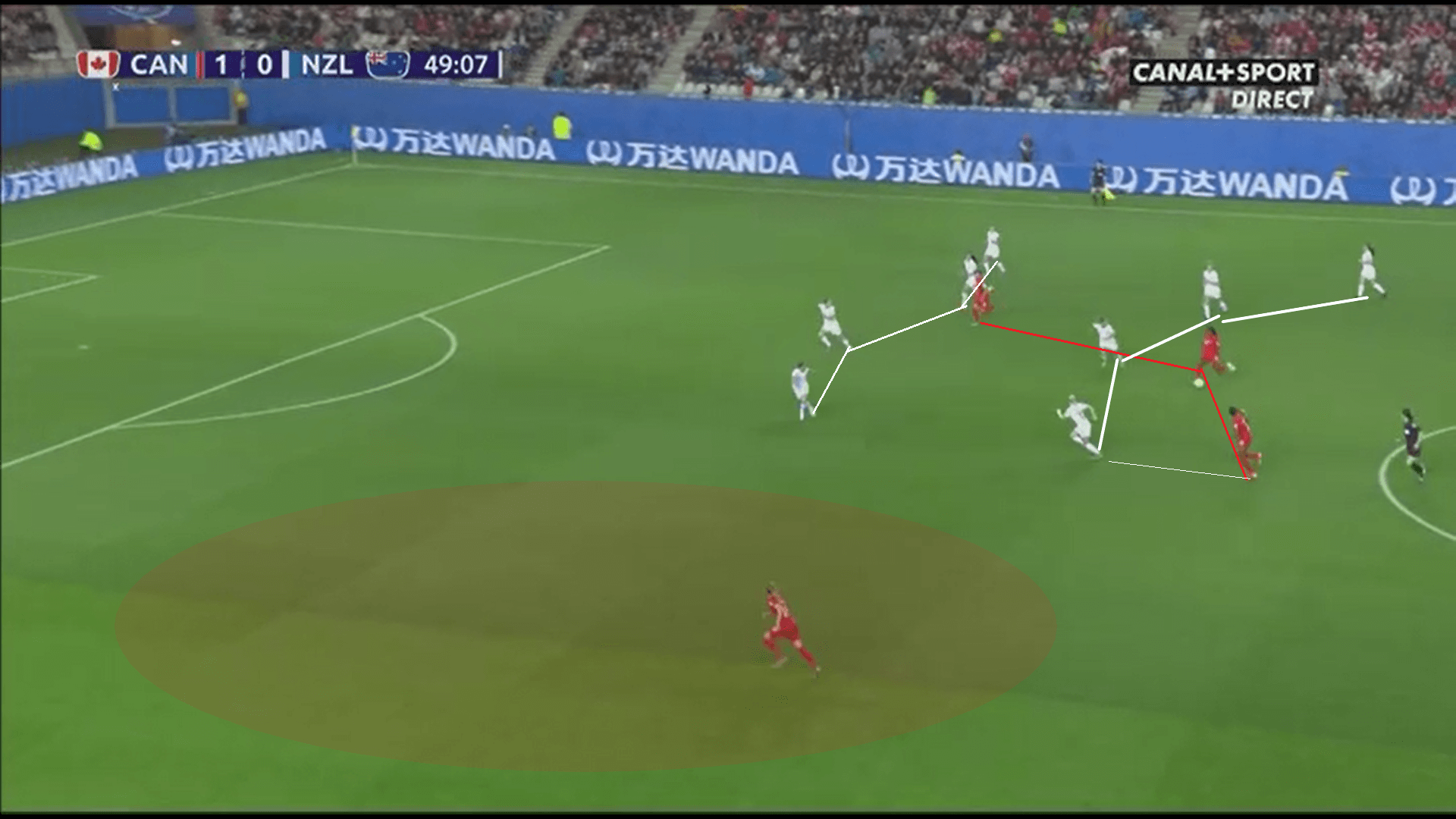 In my tactical preview, I mentioned about a combination of far post run and accurate crosses could work against New Zealand. In this match, this combination created the second goal. Since the entire New Zealand defensive line tried to stay narrow, the usually forgot the player at the far post. If the cross could find the player lurking at the far post, that could become a huge chance.

In the below image, Canada attacked at the right flank again. Two New Zealand defenders stepped out to close off the opposition at the flank. Therefore, Erceg and Riley were out of position. The defensive structure of New Zealand has broken again. At the same time, their key player Sinclair lurked behind the opposition right-back Bott. She was at Bott’s blindside so Bott could not track her run. When the ball came in, Sinclair was able to head the ball. Although Sinclair’s attempt hit the post, Prince picked the ball and scored. They sealed the game with this goal. 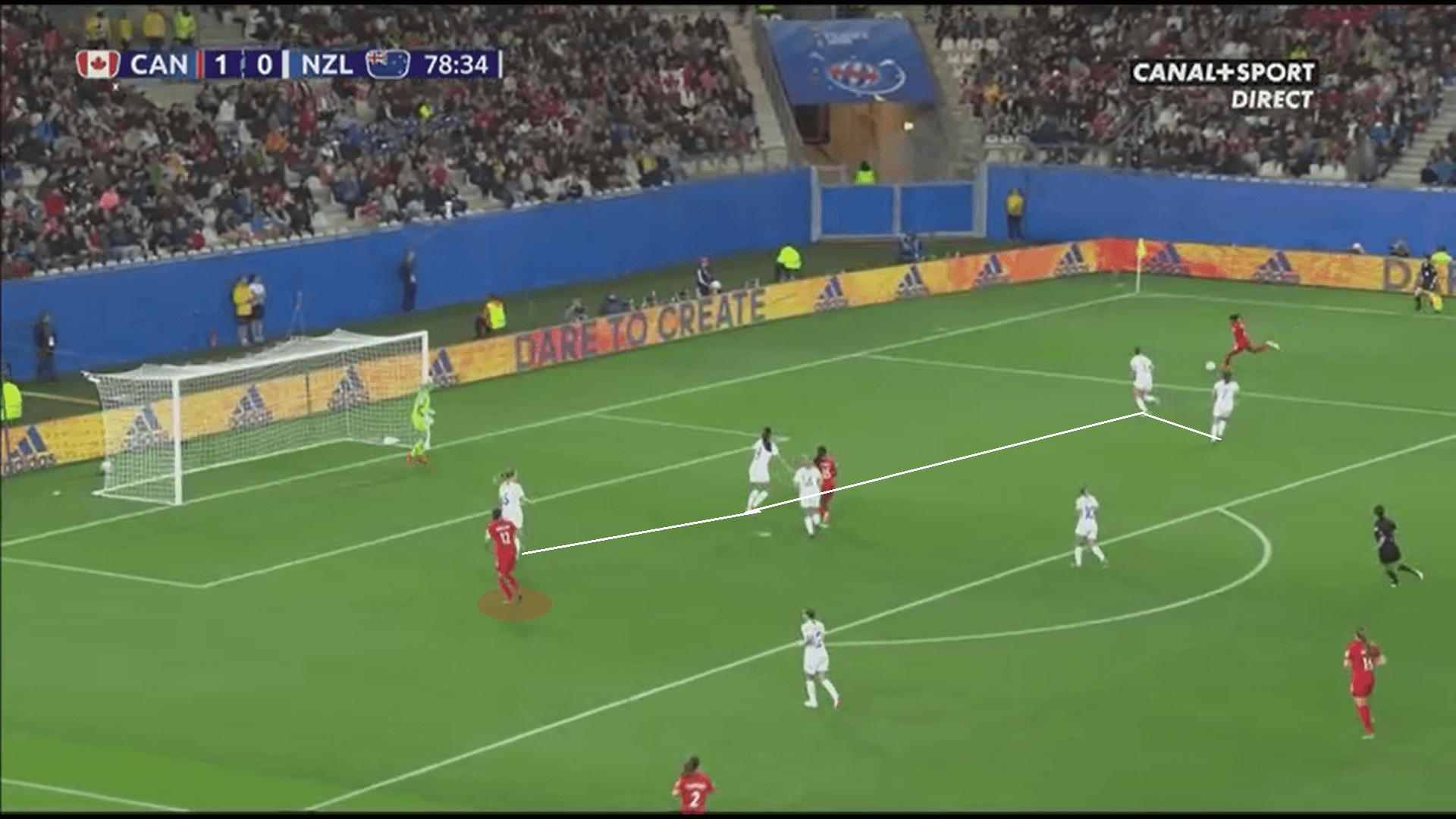 In the post-match conference, the New Zealand manager Tom Sermanni said they were beaten by a better team. New Zealand was outplayed. It was the truth. The stat also reflected this point. The xG of Canada (3.6) was far higher than New Zealand’s (0.2). Canada was the better team in this game.

Sermanni’s conservative approach could be questioned, but it is more likely he would play more aggressive in the next game. They played Gregorius but she could not hold the ball up front to start a counter. Canada’s use of three at the back and the ability of Sinclair was intriguing. Beckie was also able to produce some threat down the left flank. To sum up, it was a very a one-sided in game, but Canada still has to amend the problems of their system for more.