South Africa is officially out of this 2019 FIFA Women’s World Cup. The campaign had been definitely below expectations for the finalists of the last African Cup of Nations.

Yet, there is still one FIFA Women’s World Cup match remaining and so an opportunity to catch the world’s eye. On the other hand, Germany have already qualified for the Round of 16. The Germans are on the top of the group and a draw will secure the first place for them. Even if the match is without huge stakes, the size and importance of the competition can still boost the motivation of all players.

In this tactical preview, I will try to figure out the tactical keys that will help each team to get the best of this match.

It’s well known that if a national team does qualify for the next round with one match left to play, the manager has the tendency to rest their main players. It’s also an occasion for young talents, rotation players to gain everyone’s confidence for the rest of the competition. Thus, Martina Voss-Tecklenburg will look, on Monday evening, to make some changes in her squad.

The team does evolve, in general, in a balanced 4-5-1 structure. The injury of Dzsenifer Marozsán, named French’s Ligue best player for the third consecutive time, made her manager think of different disposal. The Germans switch to something more like a 4-4-2 with Svenja Huth with Alexandra Popp up front. B

oth formations offer compactness to the team in the defensive phase. The first does so, especially while defending near the sideline whilst the latest is efficient at closing the central paths.

Looking back at the South African team, the Banyana Banyana did not have many offensive opportunities in their first two matches. Logically, and if they were not already eliminated, they will not have much more against Germany. Since circumstances are different, South Africans will maybe try to advance more through the pitch. These imply maybe the participation of both Amanda Mthandi and Thembi Kgatlanta in a 4-5-1 formation.

The Germans, especially in their last match against Spain, tended to be very direct when it comes to offensive phase. They played more than 60 long balls during the game among their 285 passes. This is more than 22% of the total of passes and what is even more impressive that a considerable amount of these long balls were not long ‘aerial’ balls. (Yeah long and aerial are most of the time confused but are definitely not equivalent.) An important number of these 64 long balls is in fact long medium, low-height passes in directions of side midfielders or attackers. Here are some examples in the picture below taken from the match against Spain. 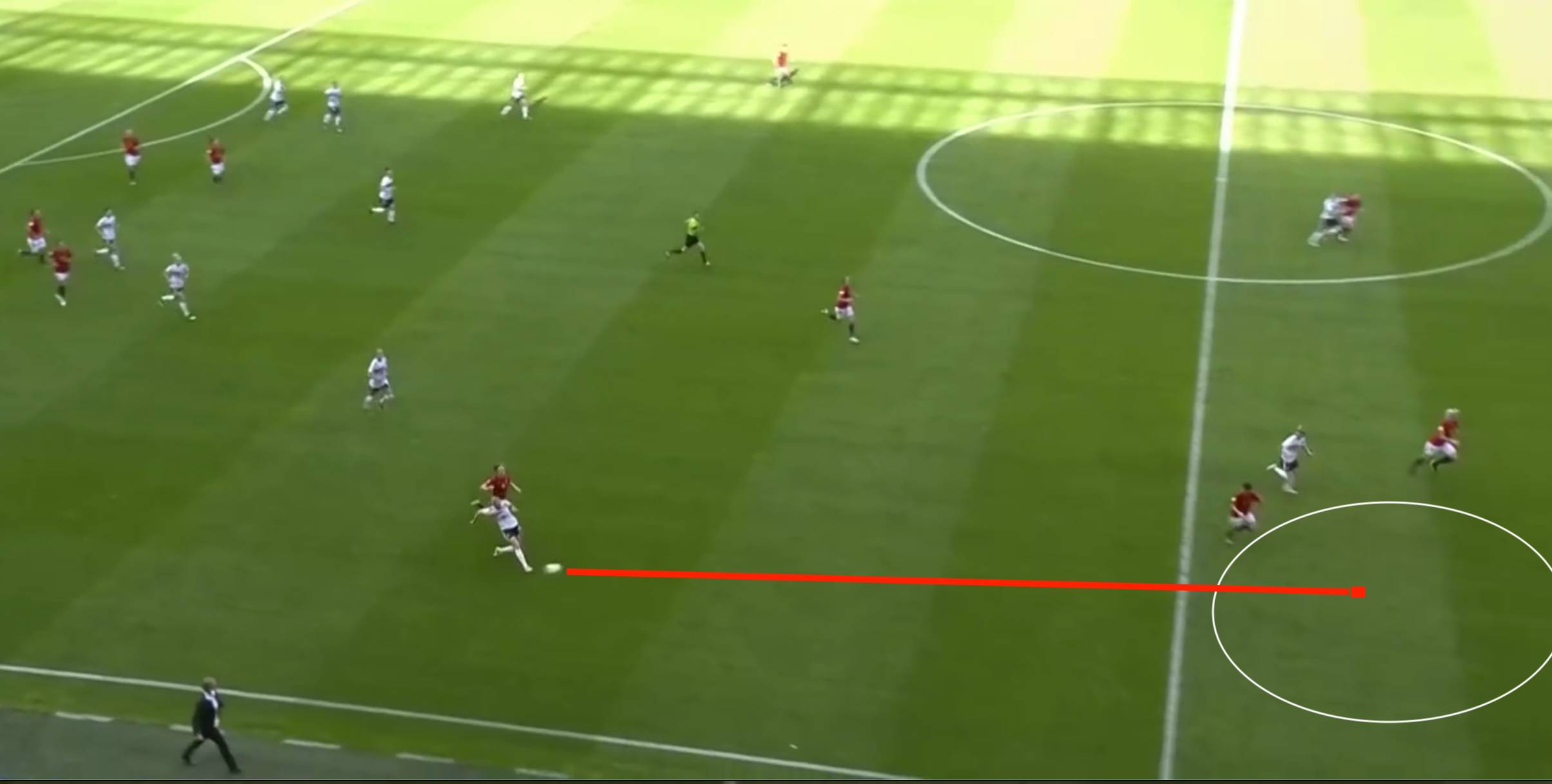 This, of course, cannot be very representative since South Africa will probably not control the game as Spain did.

This says that unless the Die Mannschaft decide to leave the ball for the opponent, South Africa does not possess the tactical flexibility and technical abilities of the Spanish. Thus, there will not be many available spaces at the back of the full backs as they will not go too much forward. Though, these direct passes can tell us about the general philosophy of the Germans. Voss-Tecklenburg’s players try to spend as few as possible time on the ball. They try to look for passing opportunities as rapidly as they can to disrupt the opponent’s attention. Opponents, then will not have enough time to organise themselves and close path in the zone around the ball.

This is one of the most predominant ideas in German football in the last years. A study showed that the average time that a National Mannschaft player spends with a ball at his feet dropped from 3.2 in 2006 FIFA Women’s World Cup to 1.1 in 2014.

The philosophy explained above can be very harmful to the African team if they do not arrange a few things. One of the points that I have remarked about the Banyana Banyana’s defensive organization is their lack of compactness in midfield. Either in 5 or 4 midfield-man there was always much space to exploit for the opponents. This did happen in the preparation matches and also against Spain. It’s essentially due to the deep positioning of one, or even two central midfielders. It did also happen when the opposing team try to stretch their structure like the game they played against the USA. 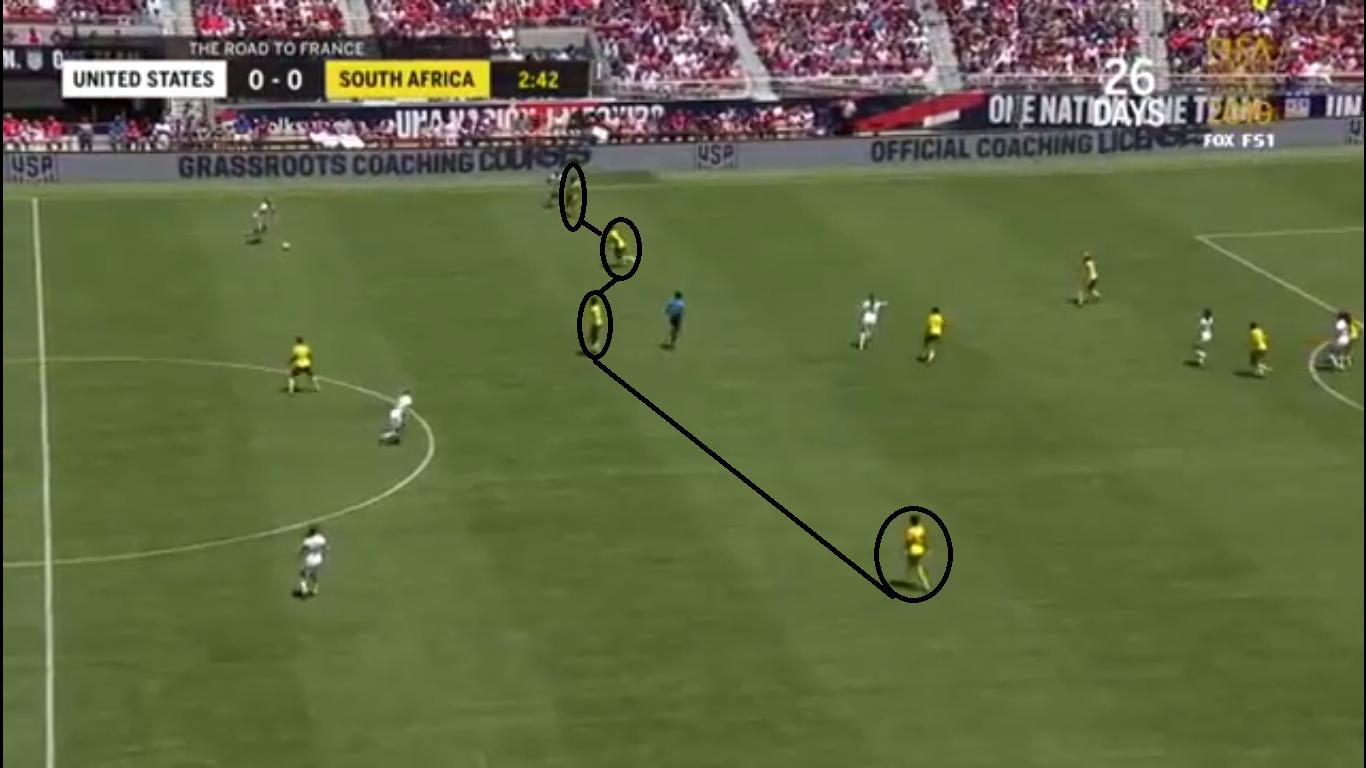 Given that the German team look for vertical pass lines, these spaces in midfield could be crucial. German central defenders can use these spaces in the first step of the build-up to find their side midfielders. They can by then cut inside and either shoot or look for a through ball. You can see here an example of typical ball circulation, in the same model mentioned, that I have noticed while watching China vs Germany. 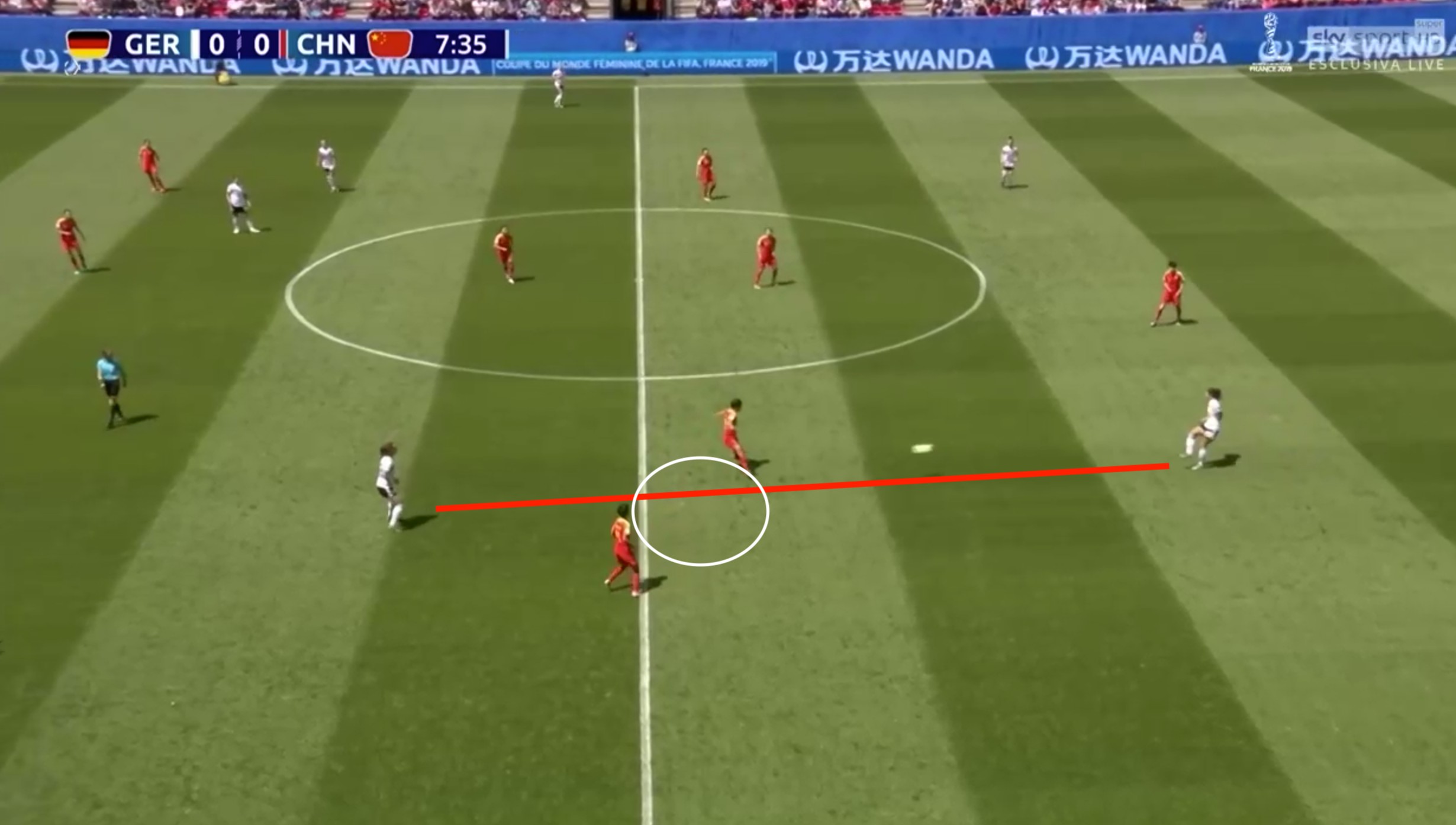 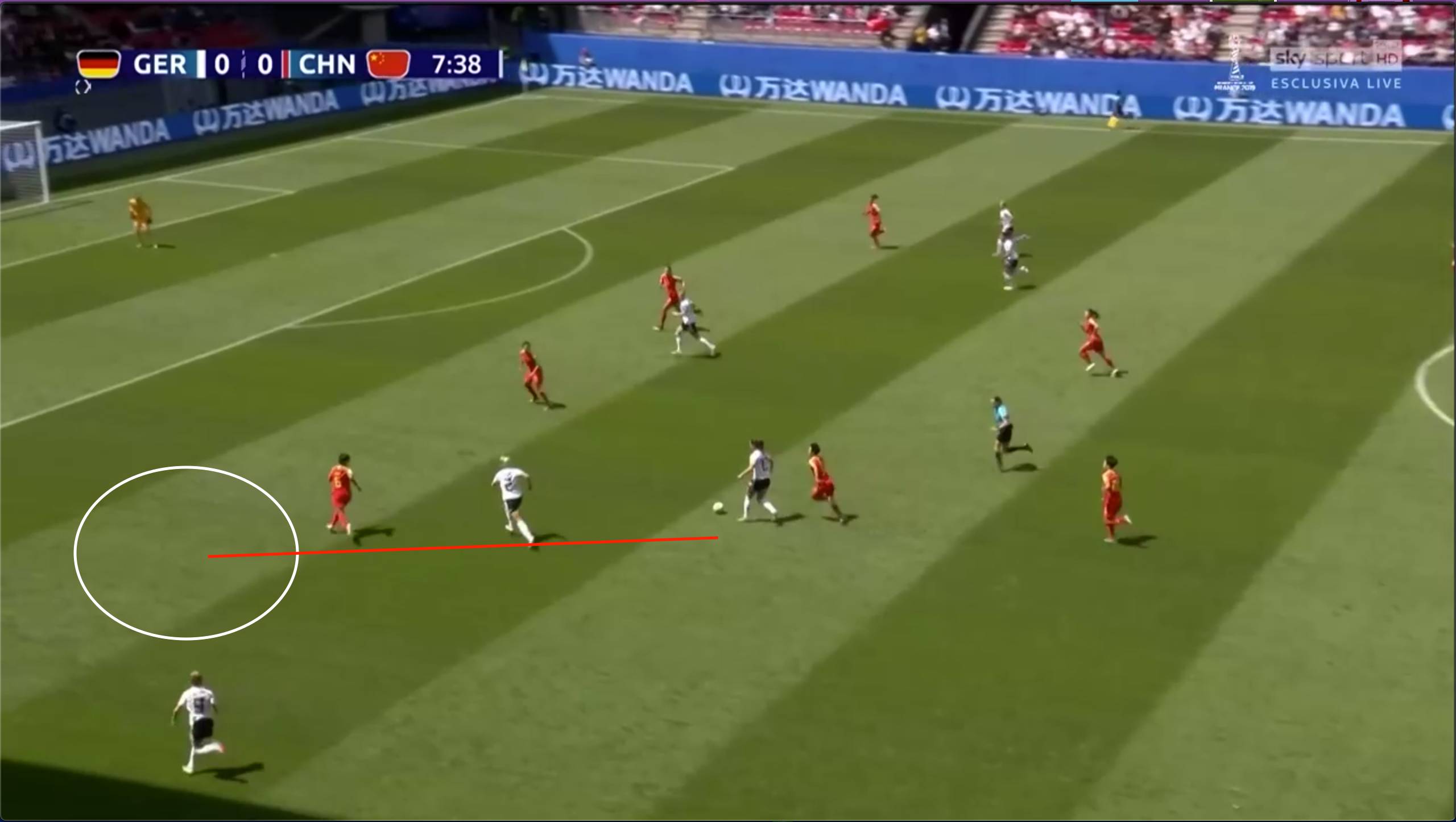 Despite losing their first two matches, and not playing very attractive football the Banyana Banyana still have a chance to show the world what they are capable of. This can be done in two steps. First, they need to exit the ball from their defensive third and get past their opponents’ pressing. Then, they will look for flaws in the German’s defensive structure. Both missions seem quite difficult to achieve and it’s even more complicated to realise them consecutively.

Germany does press more or less high on the pitch depending on the nature of the opponent.

Against Spain, they let La Roja players exchange passes on their defensive third and start pressing whenever they approached midfield line. Things were different against a lower quality team such as China. They tried to asphyxiate them in their own zone, oblige them to go through the flanks and then block their advancement. In my opinion, against South Africa, it’s the second scheme that the Germans will employ. This can be challenging but the Africans do have their chances. They did face a huge pressing in their game against the USA and they did realise some good ball-exit sequences.

For this, Kaylin Swart need to be very accurate in her passes, but also in her movements. She needs to think for best passing options before receiving the ball and then execute them properly.

She will need also to make herself available as an interesting pass option for her team-mates. If this can be done South Africans will also need more presence in the midfield during the build-up. Central and defensive midfielders must move continuously and in a coordinated manner. They have to stand at different heights on the pitch (x coordinate) to break Germany’s midfield line and avoid cover-shadows.

Once this step is correctly done, South Africans can look for long balls at the back of the central defenders. As German defenders do anticipate lot to cover forwards’ ball calls and are also a bit slow, this can be an effective way to create goal-scoring chances. In the last African Cup of Nations’ final Kgatlanta was a favourite target of these type of passes. If you combine these with Spain creating their two big chances this manner, Ellis Desire’ girls can make it work. 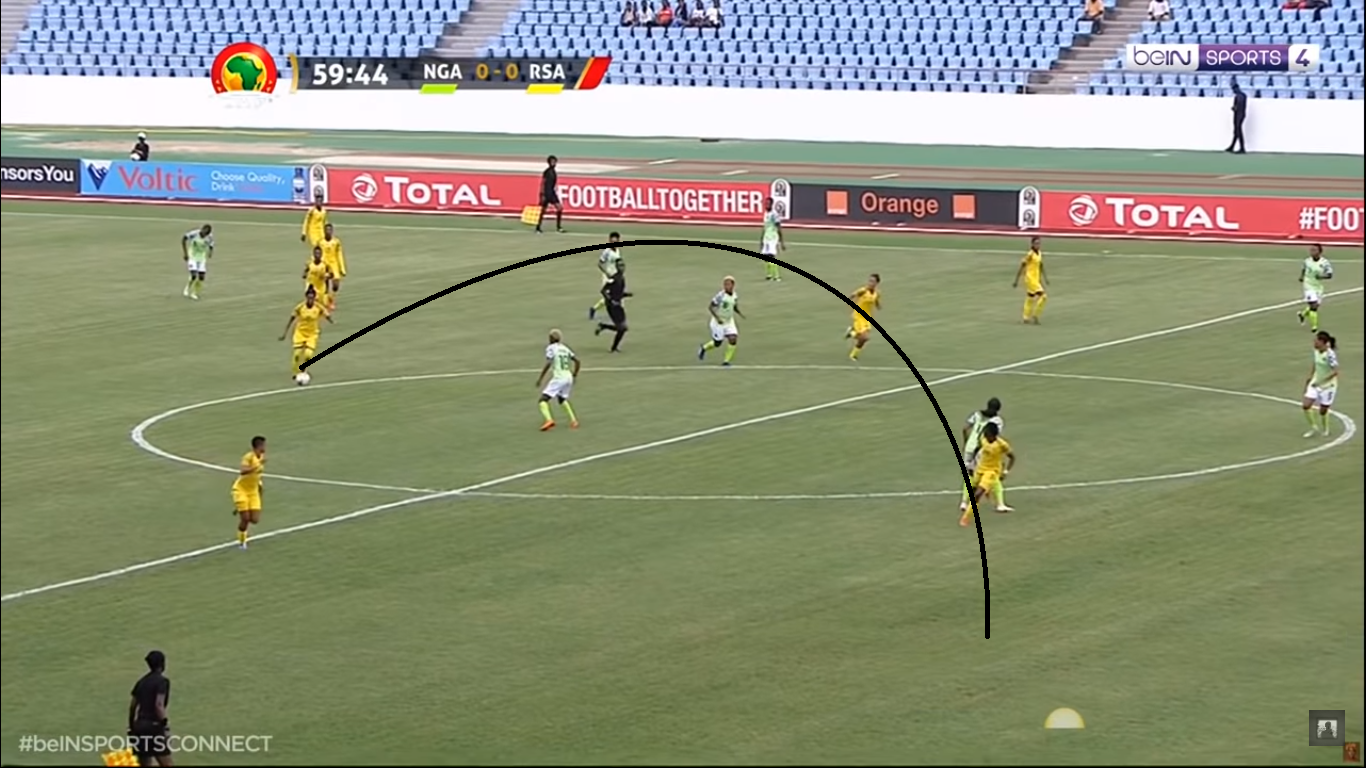 Even with more than one change in their squad, Germans remain the favourite side over this match. It’s not just a question of individual qualities but also of good use of the opponent’s tactical defects. Though, without any pressure on their back, South Africa can try their best to propose some interesting offensive sequences. This can be done especially if they work on each step of the build-up as it is their ultimate goal and do not rush the process. 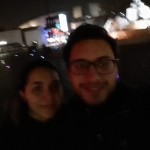