In the first group game of FIFA Women’s World Cup, New Zealand suffered a disappointing loss against the Netherlands. They nearly secured a point but Jill Roord scored in the 90th minute. However, they also came close to scoring and that proved they have the ability to play against the top teams in the world.

For Canada, their first game against Cameroon was a relatively easy one. They managed to take the lead before half-time and their direct style of play always looks threatening. I believe they will continue to play like that in this game as well. This tactical preview uses tactical analysis to show you how the game might play out.

Spaces between the lines in New Zealand’s defending

The Football Ferns usually defends in a 4-4-2 shape. Sarah Gregorius and Rosie White form the first line. Then, the rest of the midfielders form another line. They did not press high or intensely to disrupt opposition build-up. Moreover, there were huge spaces between the line. If the situation on Saturday is the same, Canadian women could build-up smoothly on the ground.

The below image showed how the Football Ferns defended. A 4-4-2 shape and notice how the space between the lines was huge. The Netherlands left centre-back Dominique Bloodworth was carrying the ball forward while an orange shirt pivot stayed behind Gregorius and White. The positioning would be perfect if the pivot could move to the orange space shown below. This, in turn, could draw the Football Fern’s Katie Bowen or Ria Percival out and New Zealand would lose their defensive shape. If not, the Canadian women should be able to keep the possession without being pressed much. 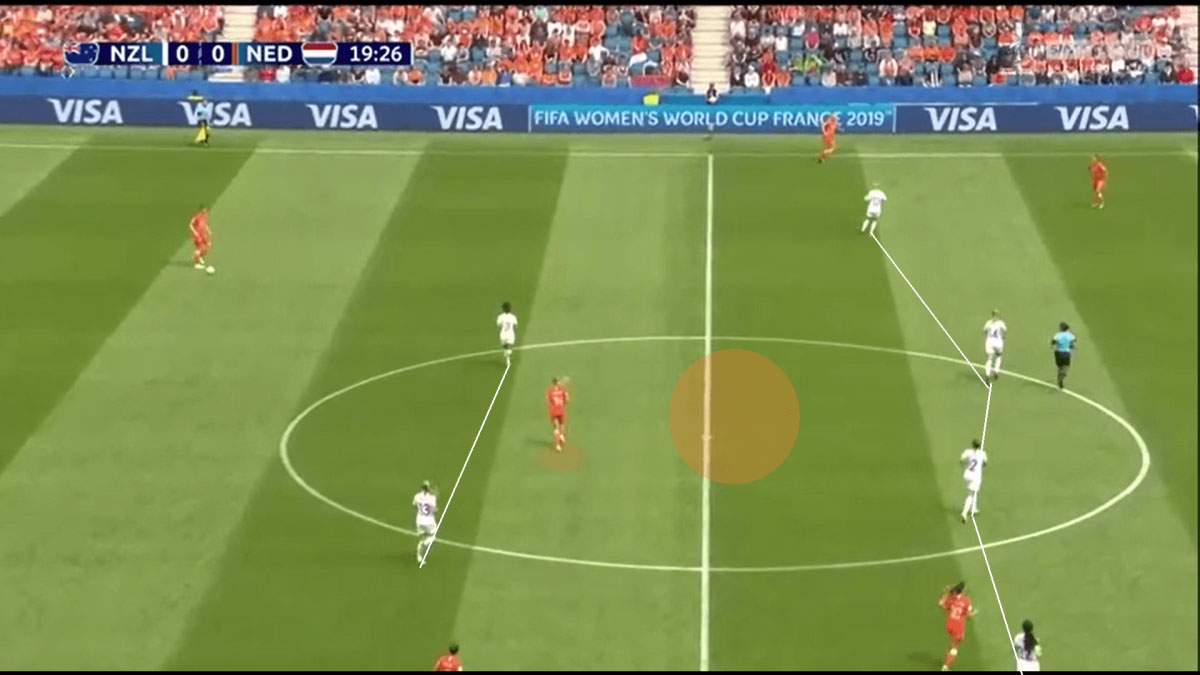 Overloading the weak side and making far post runs

When the ball progressed to a deeper zone, the Football Ferns tended to step out early to stop the attack. At the same time, their midfielders would also move to the ball to compress spaces. They would also apply pressure at that area. If the attacking team have a lot of players at one of the sides, which created a strong side, then this would attract most of the Football Ferns to that area. As a result, the other side becomes the weak side. In the first group match, the Netherlands used wide players to stretch the pitch. In the final third, that player usually became unmarked due to the defensive approach of New Zealand. If the ball could play to the player lurking at the far post, it would be a huge chance to score.

The below image reflected the loopholes at the far side of New Zealand’s defensive approach. An orange shirt was carrying the ball in the right half-spaces. There were three orange shirts positioning themselves at the right side. To react, the Football Ferns moved to that side to block the pass and compress space. Six white shirts were moving towards that zone. Therefore, the far side became fragile. Two orange shirts against New Zealand right back CJ Bott, as circled below. If the ball could be released to the player on the far side, it would be a huge chance. 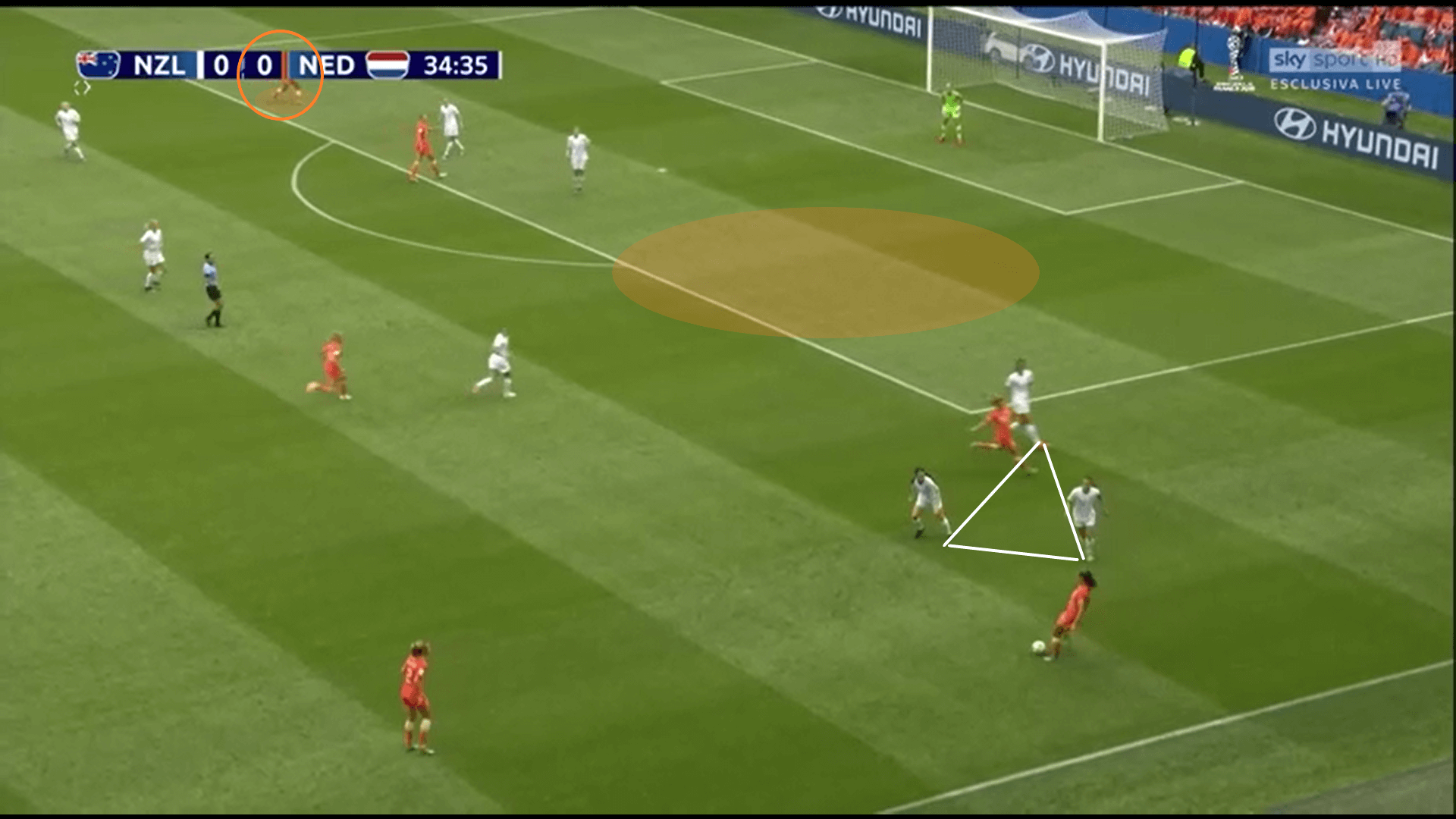 Canadian women could do the same. Using players to stretch the pitch, move the ball to drag the players to one side, then hit their weak side.

Space exploitation at the strong side

If the defenders don’t all stay on one side, then the far side could be protected. However, this would create another problem: huge spaces left behind. The following image reflected that. In the scene, there were three Netherland players on the right side. To maintain numerical balance, three white shirts stepped out to prevent an overload. Their captain Ali Riley also stepped out to close off the opposition. After Riley left her position, there was a huge gap between the left back and the centre-backs (as the orange zone showed). At the far side, two orange shirts again two white shirts. Though numerical balance was achieved, the space generated between defenders was too big. The Netherland players could have exploited those space in order to create a shooting chance. 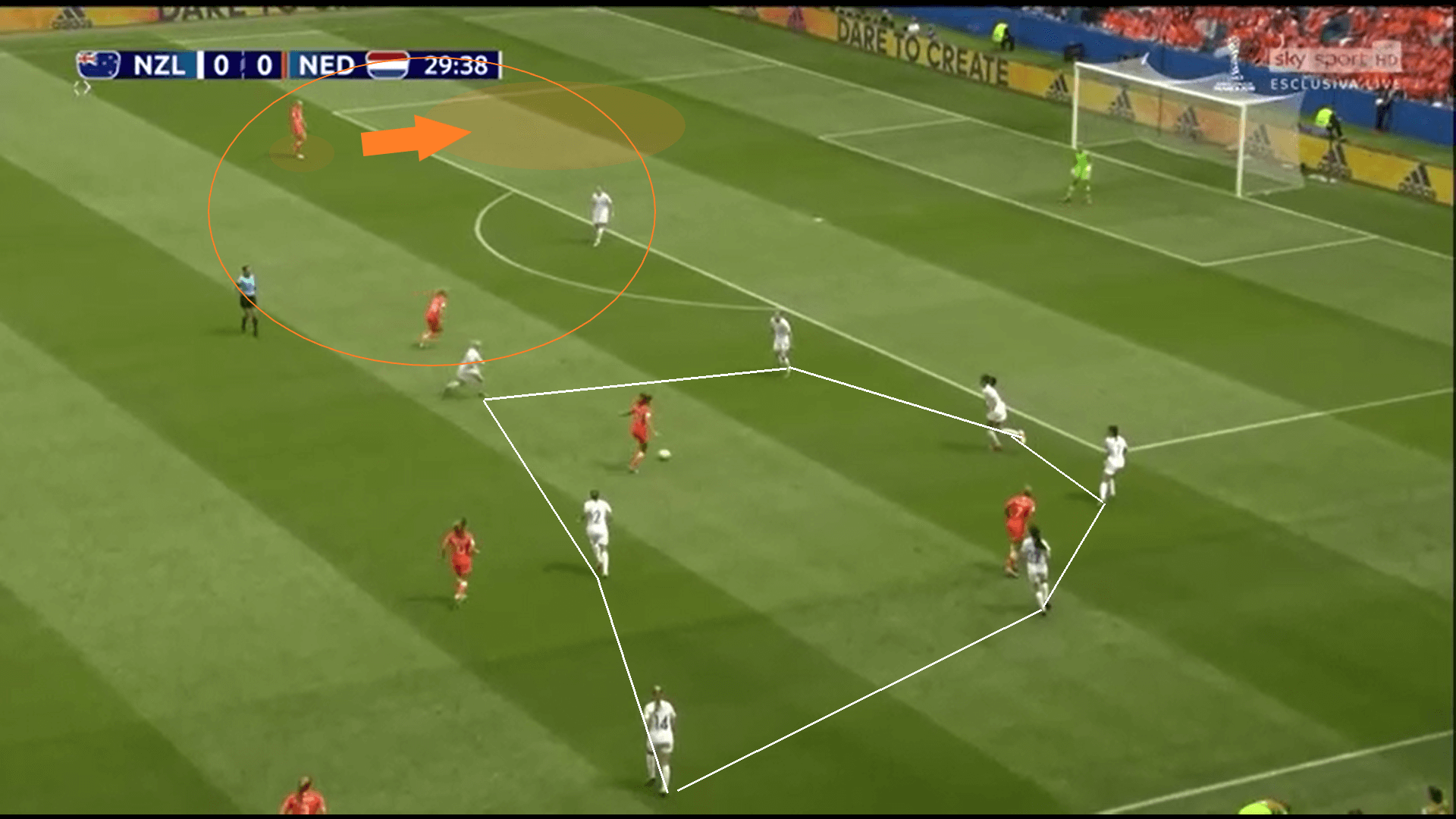 This is another scene to address the above problem. This time the ball was on the left flank. Again, there were three Netherland players on the left side. Four Football Ferns stepped out to respond. Their right-back and centre-back Bott and Stott left their position, which left the other centre-back Abby Erceg dealing with the opposition alone. Again, a huge space was generated between defenders. This time the player at the far side was marked, but there was too much space left behind. Also, the New Zealand defenders tended to focus on the ball instead of the opponents. So, if the ball was played into the zone, the Netherlands’ players created a chance again. 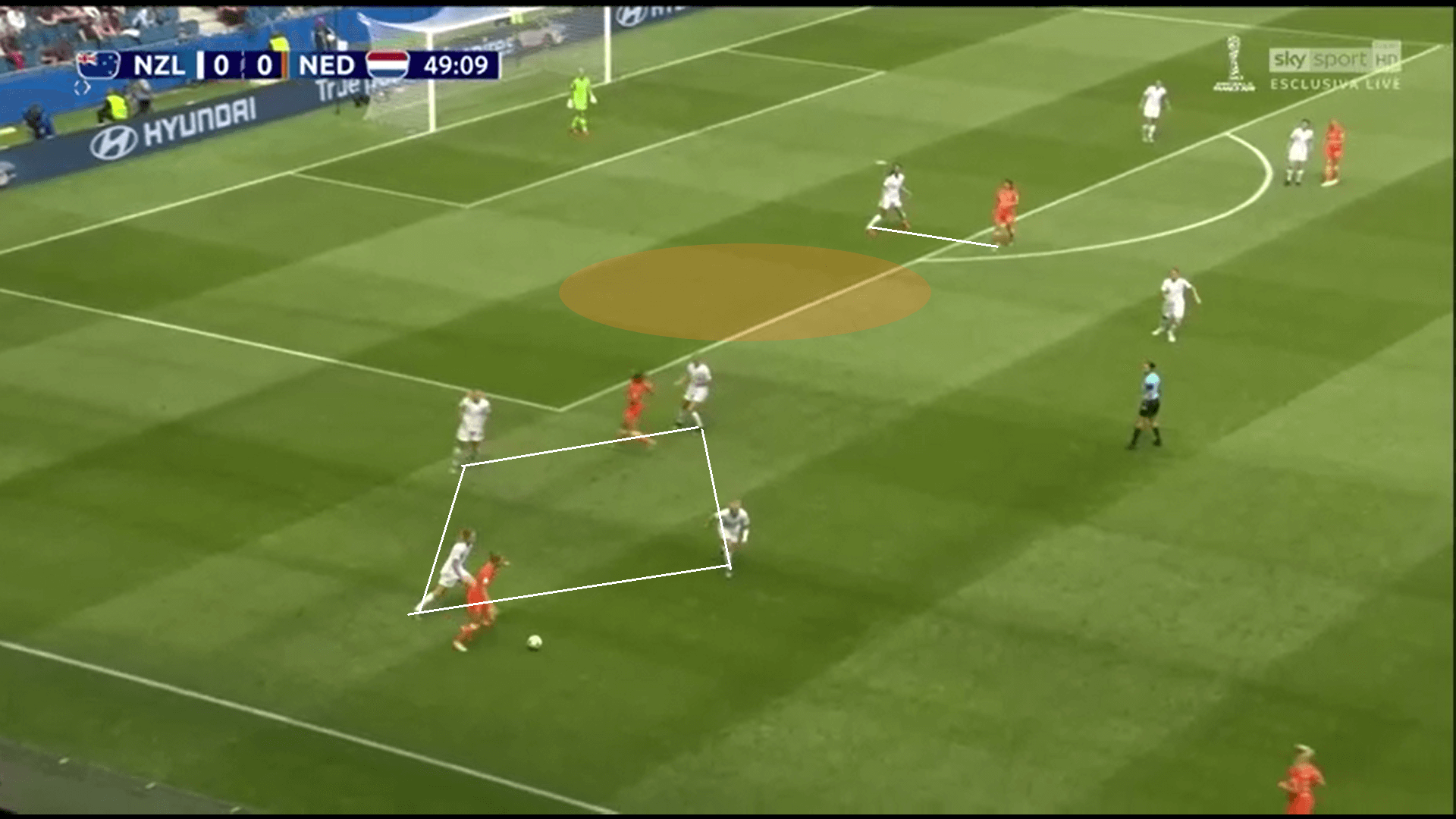 In the second group match, the Canadians could use the same approach to put the Football Ferns in a dilemma. By moving the players, they could generate space in the danger zone and exploit those space. If the entire New Zealand defensive line moves to cover those space, then the player lurking at the far side suddenly becomes free.

The Football Ferns were concentrated enough to prevent central penetration in most cases. Therefore, it forced their opponents to create chances from both sides, especially by crossing. When defending crosses, if the defender focuses too much on the ball and forgets where’s the opposition, it’s more likely they will be unable to track the run said player. Positioning and anticipations were also important as well. I think the New Zealand defenders could have done better in terms of defending crosses. They let their opposition cross too many times in the game.

The two images below are good examples of that. The Netherland left-back Kika van Es attempted a cross as shown below. There was space behind the defensive line as the orange zone showed. Therefore, the cross would have probably hit that zone. Both New Zealand central defenders Bott and Stott were dealing with the opposition alone. And Stott, their left centre-back, was ball-watching. As a result, she could not track the run and allowed the opposition to head the ball. Furthermore, the goal could also be attributed to a similar error. They shut down in an instant and just let their opposition score with a free header. 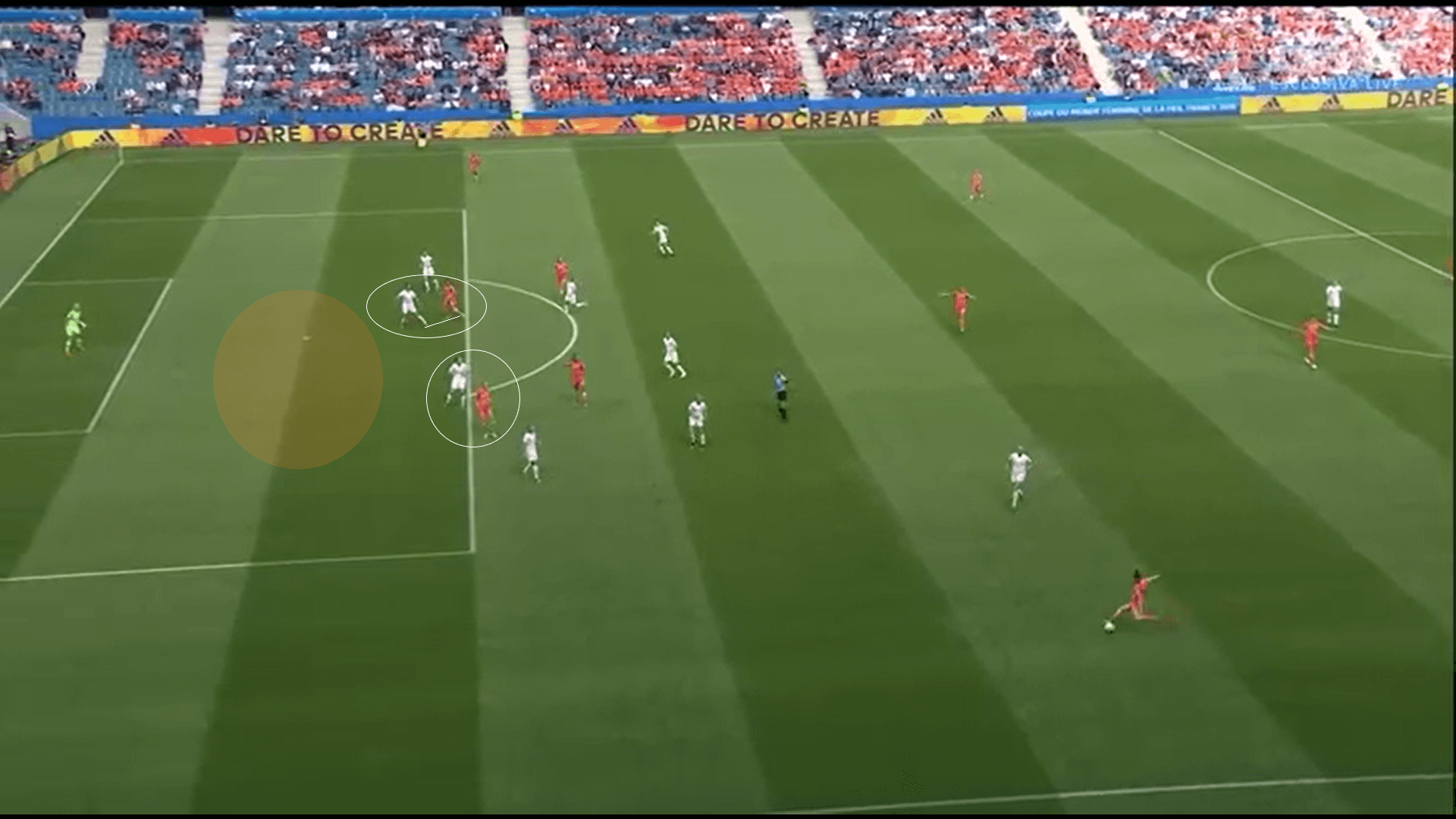 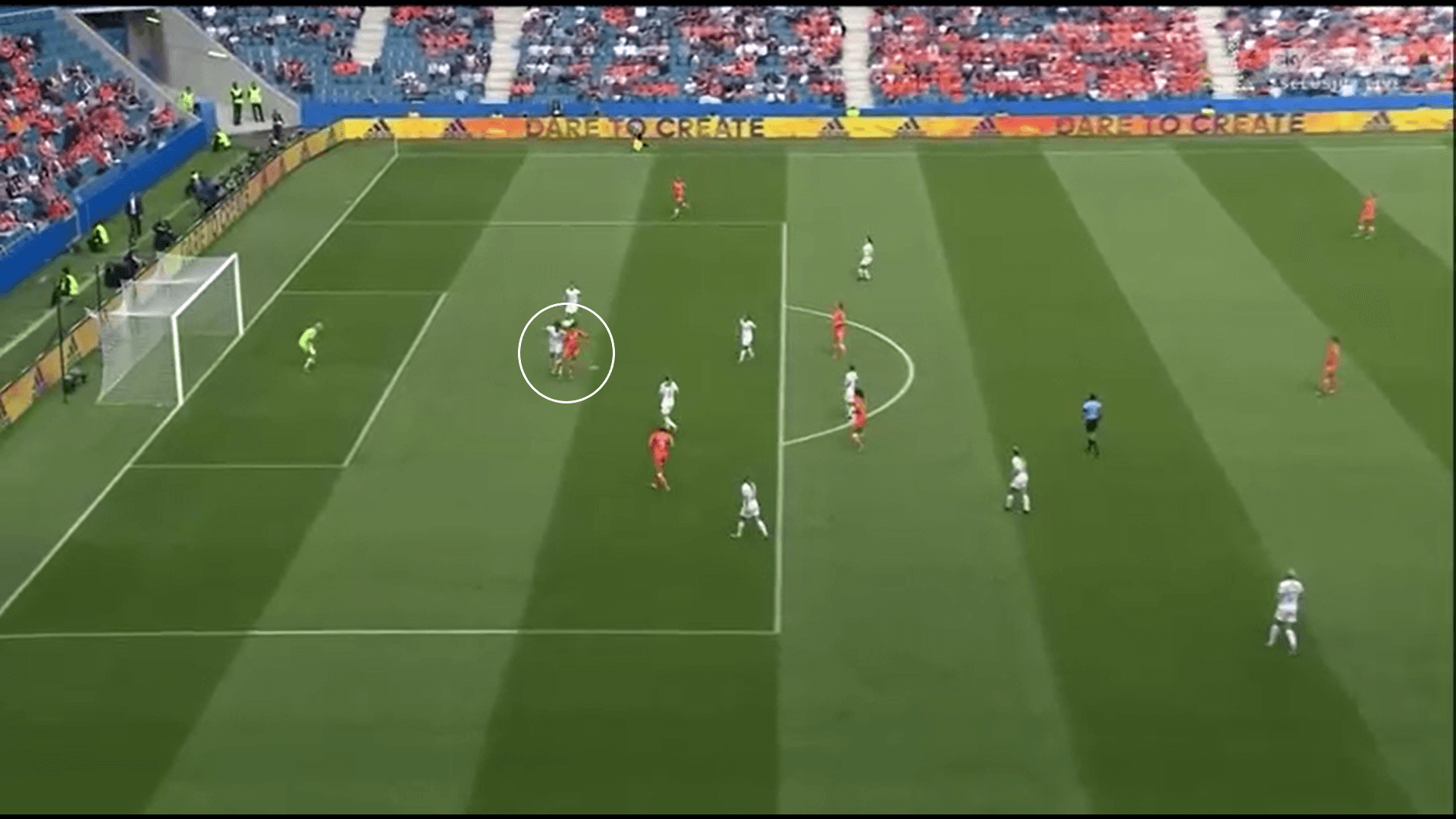 We saw the loopholes of New Zealand above and judging by those, Canadian Women could have something threatening to make use of them. They like to play direct football, and they are known for making a good pass that eliminates all the opponents at once. Also, their players would also look for a chance to run behind the line.  Therefore, New Zealand should make sure their defensive line stays focused throughout the game. If any player shuts off for a moment, that could concede chances and spell danger for the team.

The below image is an example of Canada’s direct football. There were four players staying on the shoulders of Cameroon defenders. At the same time, the Cameroon players were trying to play an offside trap. Unfortunately, their right wing-back Claudine Meffometou did not realise that and she was caught off guard. Also, the three centre backs stepped out. As a result, there were huge spaces generated behind the defensive line. The white shirts were going to exploit those space as they have the ability to deliver the ball into that space. It eventually leads to a chance for Canada. 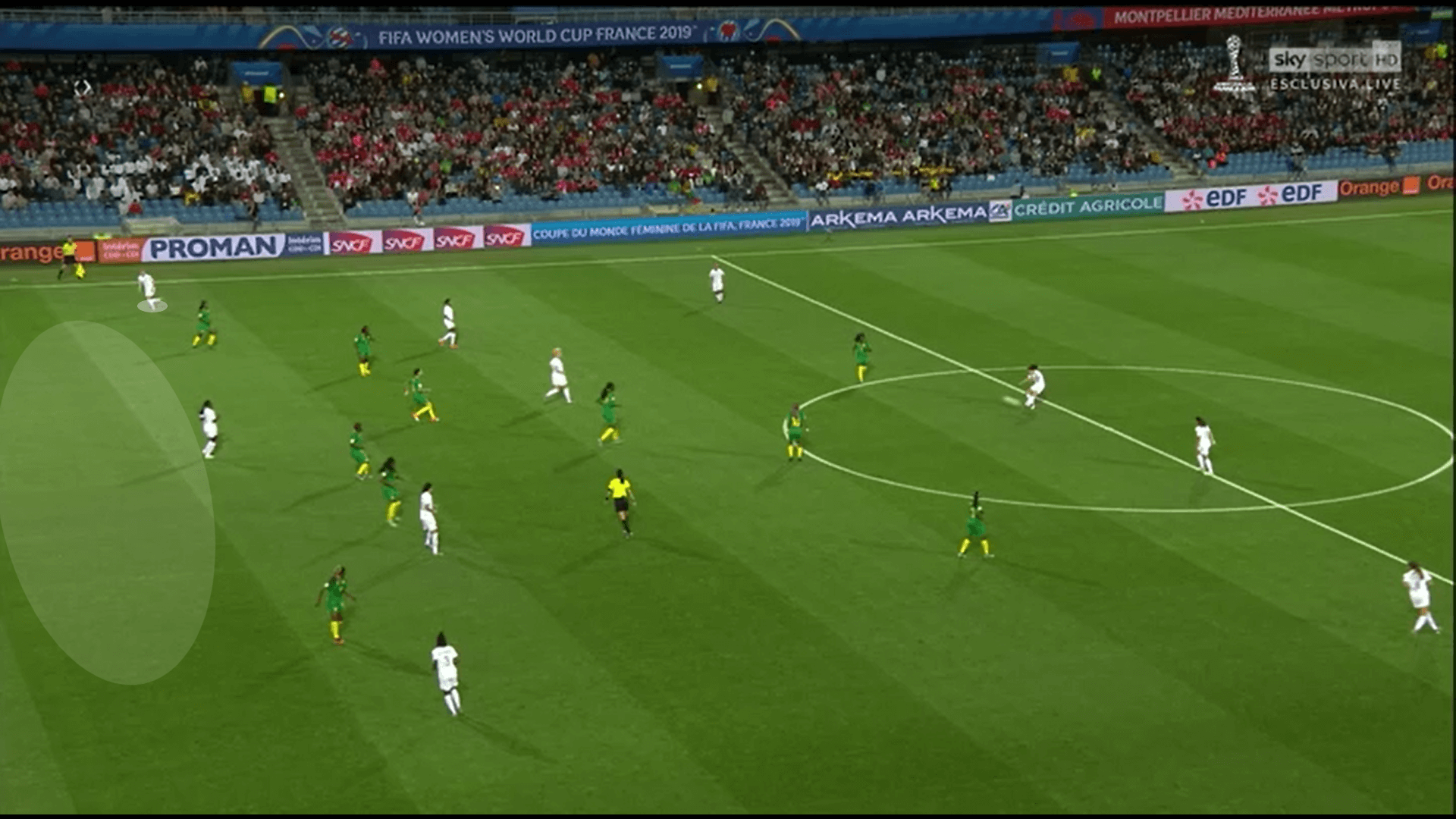 Below is another example of the direct football of Canada Women’s team. In different situations, they would try to play directly over the defensive line if they have a chance. Also, there would be at least two players to attack the box in most cases. Therefore, the defenders should get themselves prepared for those long balls or crosses. In the below scene, their left back Allysha Chapman recognized the space behind the defensive line again. It was a dangerous zone and a goal-scoring chance if any white shirts were able to meet the cross. Again, Chapman has the ability to deliver the ball to that area. This time the Cameroon goalkeeper Annette Ngo Ndom came out and punched the ball. 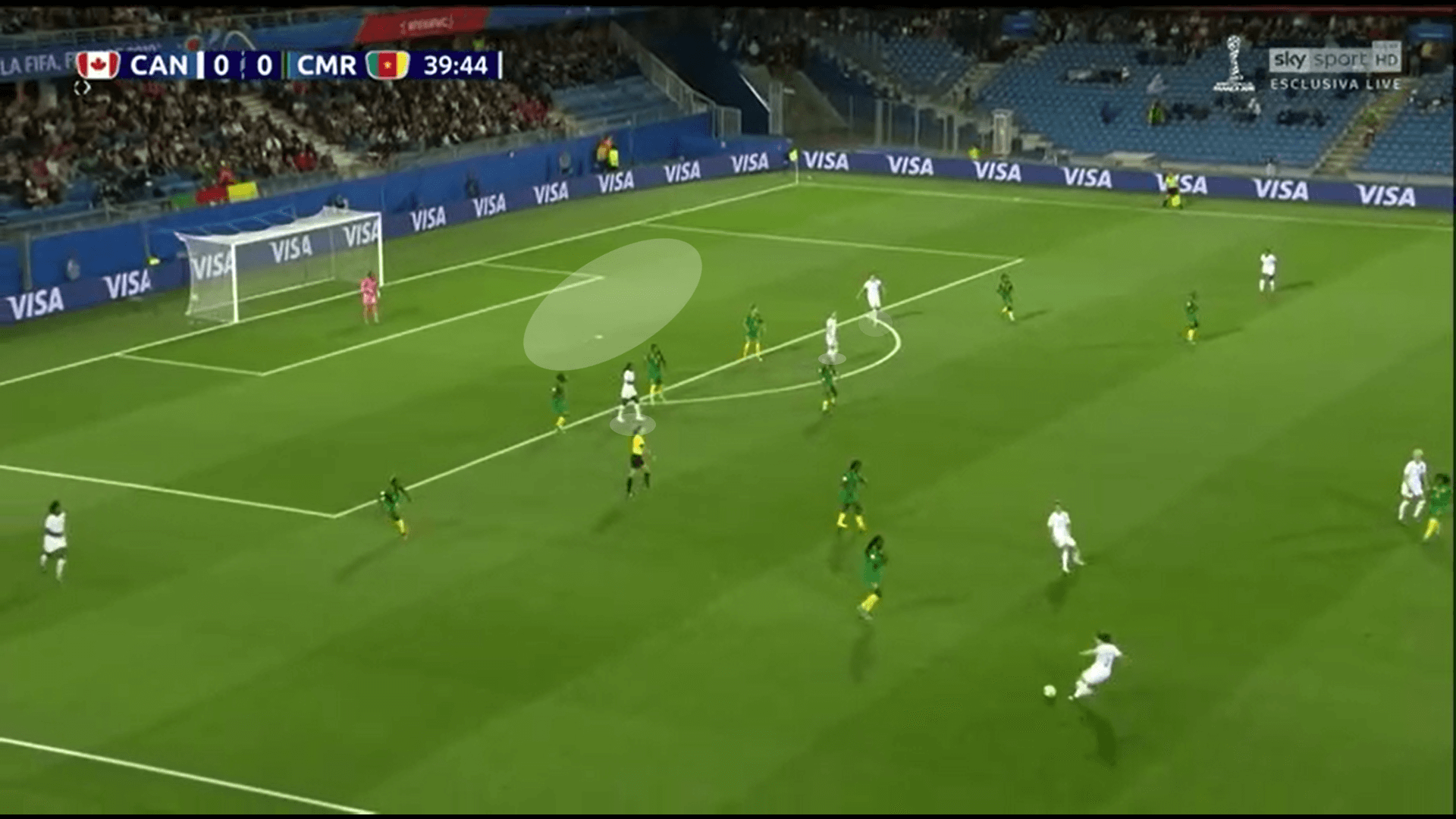 The chance for New Zealand to counter

Canadian Women commit many players to attack the goal. In some occasions, there were two players left at the back. The defensive line was high as well. Therefore, the Football Ferns could try to exploit the space behind the Canada defenders. The below photo illustrates the case. The Cameroon goalkeeper played a long ball forward (the ball was in the air as circled), which eliminated many white shirts. There was a lot of space around the Canada defenders and, this time, the ball went right behind them. Also, there was a green shirt supporting the right side. I think New Zealand could try to do the same. With Gregorius’s pace, they should be able to hit the space and release her. Then they could create big shooting chances if they do so. 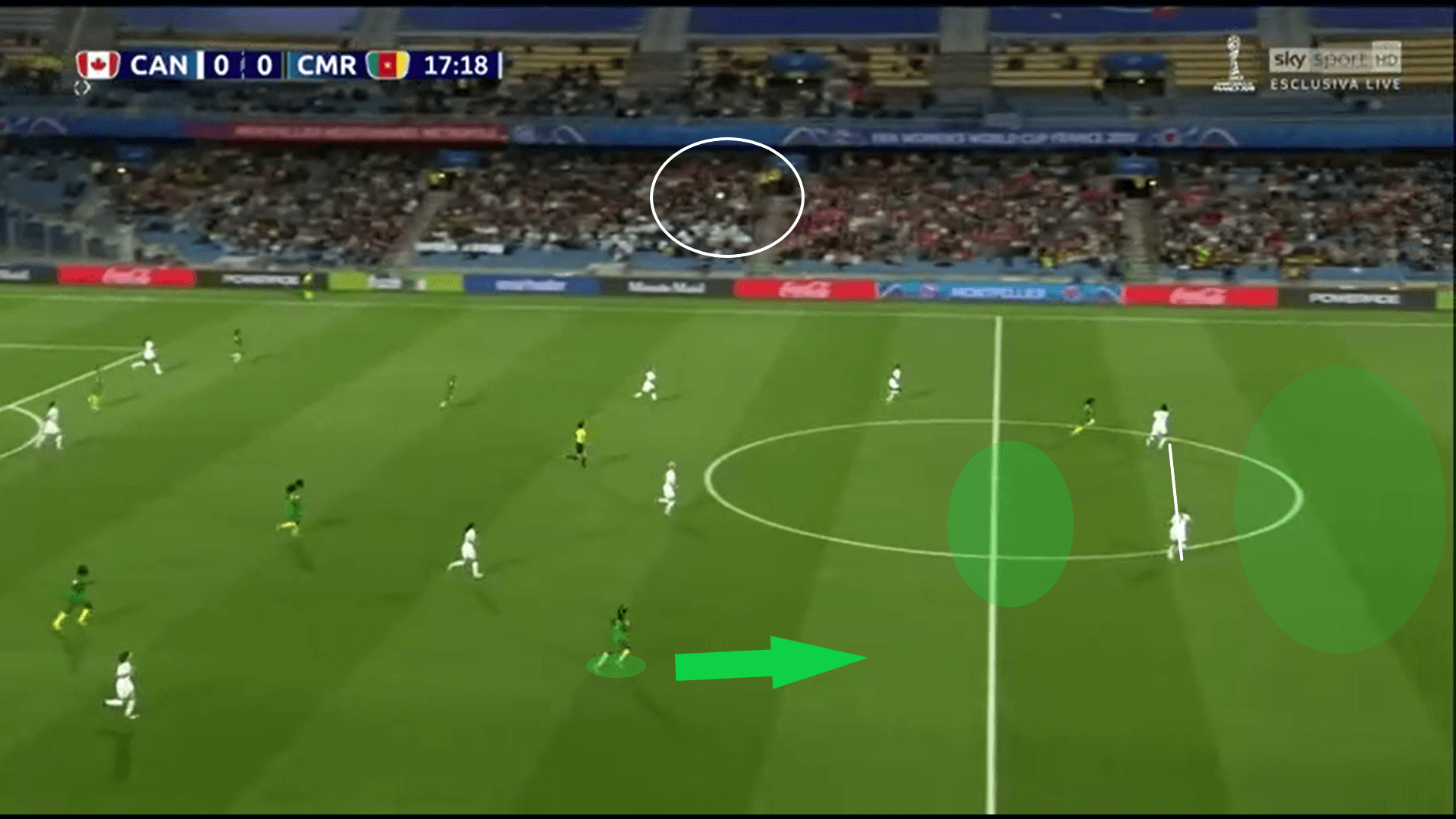 To prevent the counter attacks of New Zealand, Canada should perform high-level counter-press. Good counter-press takes away players’ room to think and read the game properly, forcing them to make a quick decision. With counter-pressing, which they did in the game against Cameroon, they could reduce the threat of the Football Ferns.

The below image illustrates the counter-press of Canada. Two seconds ago they lost the ball and all white shirts were moving to that side to compress spaces. As a result, all four Cameroon players close to the ball were marked. The ball carrier did not have enough options and not nearly enough time to react. As a result, she could only play the ball upfield. The ball was easily read and cleared. Canada should do the same against New Zealand. This could prevent counter attacks. 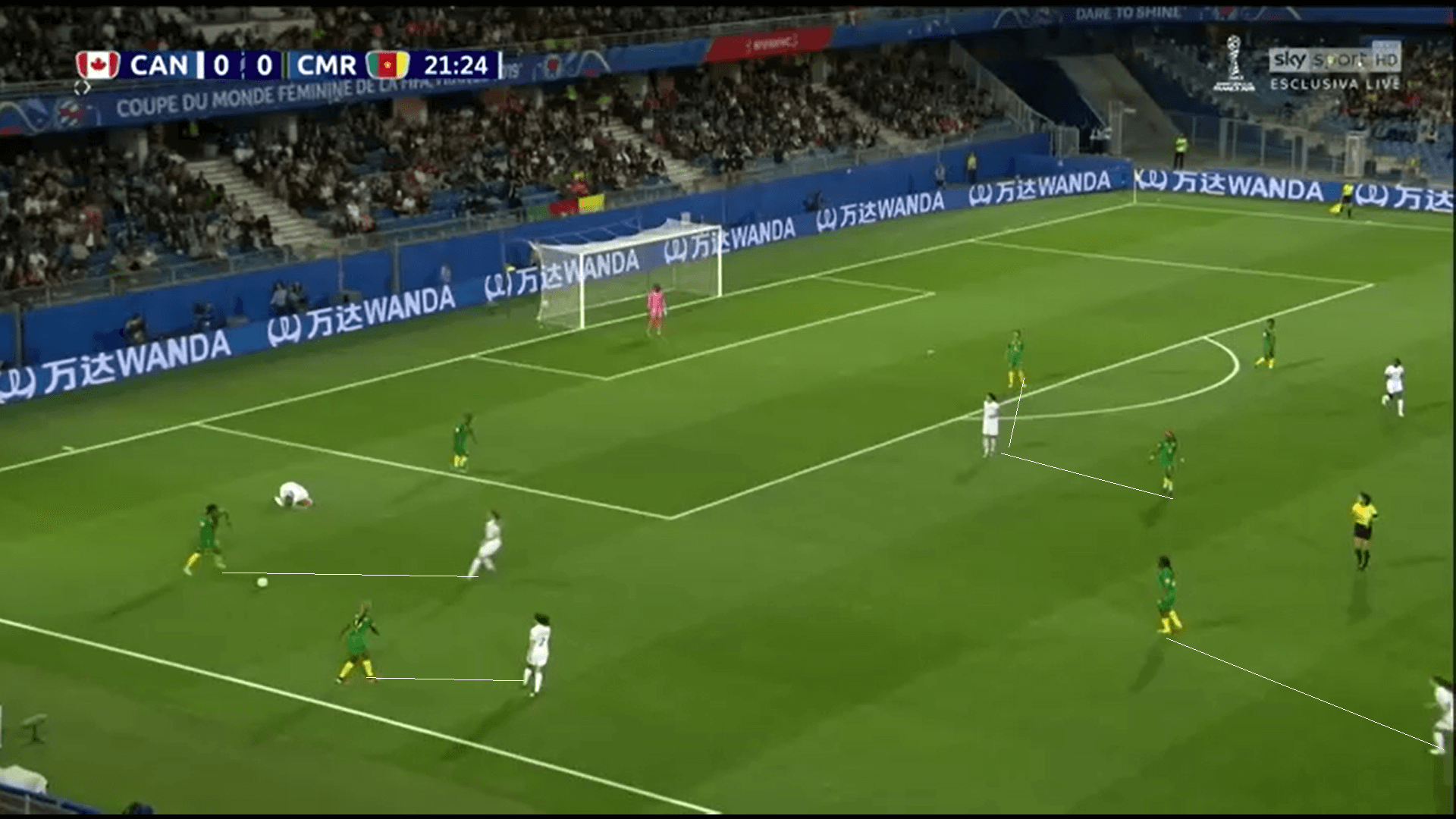 The Football Ferns nearly managed to get a draw against the Netherlands at FIFA Women’s World Cup. However, the goal of Roord denied it in the end. There were also moments the Football Ferns could take the lead. Gregorius missed a couple of chances and White hit the bar. They have to be more clinical in front of the goal, or else they could be punished. ’The mood was positive’, according to their manager Tom Sermanni.

Canada is a strong team. Their direct play of football could threaten New Zealand’s goal and all they need are good crosses and they need to prevent counter attacks. It could be a match in which Canada enjoy the majority of possession, and New Zealand will likely resort to counter attacks.