This Group A clash of the FIFA Women’s World Cup was between two nations trying to keep their hopes alive after losses in the opening round of matches. Nigeria were humbled 3-0 by a resurgent Norway side, while South Korea were dismantled 4-0 by the host nation, France, in the opening match of the tournament. Thus, this match was already of supreme importance; the losing team would almost certainly find themselves crashing out of the tournament, while the winners would still have some semblance of hope, given that four of the best third-placed teams in the groups also qualify for the knockout stages.

In the end, an own goal by Kim Do-yeon and a superb individual goal by former Liverpool forward Asisat Oshoala gave the Super Falcons side a 2-0 win that all but ended their opponents’ hopes of qualification. This tactical analysis piece will look at the two sides’ approach to the game. 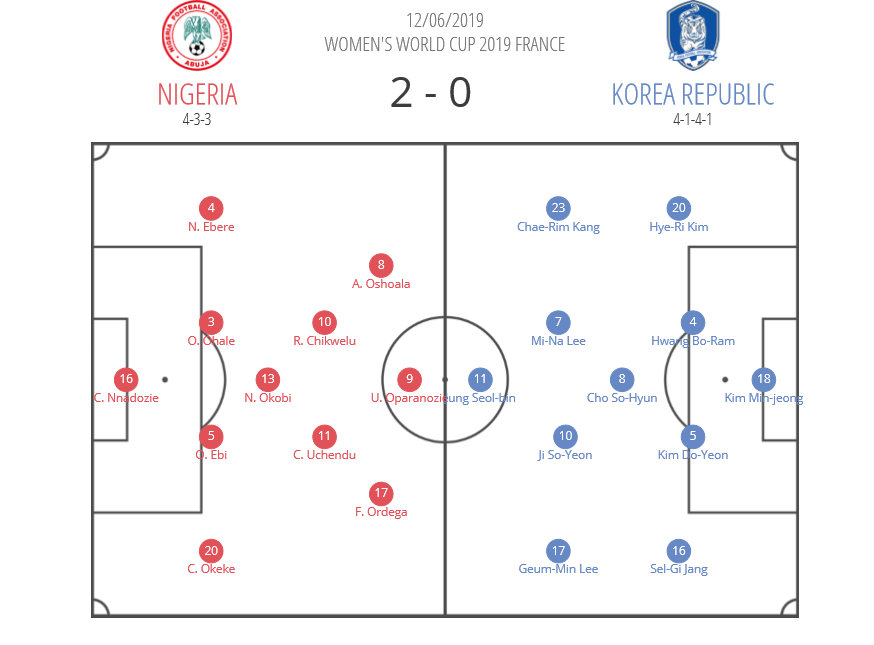 Nigeria went with their usual 4-3-3 formation, with new Barcelona forward Oshoala on the right wing and captain Desire Oparonzie as the central striker.

South Korea, too, stuck to their tried-and-tested 4-1-4-1 system. Captain Cho So-hyun played as the deepest midfielder, with both Ji So-yun and Lee Min-a starting ahead of her in more advanced positions.

As our preview for this game showed, both these sides play a similar brand of football, preferring to play a mix of possession-based and direct football. South Korea started off in this vein, playing out from the back and looking to dominate possession.

Nevertheless, South Korea were able to play their way past the Nigerian press and into threatening positions. That they ended the match with 56% possession tells a story, and this number was as high as 65% at one point in the first half. Nigeria were passive, looking to sit back and deny the Koreans space between the lines; however, they were not very successful at this.

The Koreans were smart with their positioning during attacks. They would look to stretch the pitch, with the wide players and full-backs staying as wide as possible in order to pull the Nigerian defensive line wider and create gaps for runners.

This allowed South Korea to keep possession of the ball and create space for runners, usually the full-backs who would charge into space, as the Nigerians concentrated on defending the width of the box.

Despite dominating the game in this way though, South Korea struggled to create any clear-cut chances. While this can be attributed to a general lack of creativity in their passing, their opponents were also well-drilled and unconcerned about giving up possession while defending their penalty area.

As usually happens in such contests, the side looking to play in a compact, defensive manner also ends up going direct when attacking. This match was no different, with Nigeria looking to hit South Korea on the counter-attack and to try and use their superior physical qualities by playing crosses and long balls to their forwards. Both of Nigeria’s goals came from such a brand of football.

The first goal, while an unfortunate own goal by Kim Do-yeon, resulted from a long ball from the back which was turned into her own net by the South Korean defender. The second goal was a counter-attack that was brilliantly finished by Asisat Oshoala, and the African side had similar breaks on at least a couple more occasions in the game, especially after they had already taken the lead as South Korea threw more players forward in a bid to level the scores.

Nigeria’s gameplan was not without fault though. Their marking and pressing was inconsistent, and they allowed Cho an inordinate amount of space in midfield, for which they could have been heavily punished on another day.

The statistics will show that South Korea had nine attempts on target to Nigeria’s three, 56% possession and six corners to three. But Nigeria came ahead on the most important statistic, goals, with one clinical counter-attack to add to a lucky break. South Korea played some good football and were definitely the better side in the first half, but their lack of cutting edge was ruthlessly exposed by a Nigerian side who will now look to upset the hosts, France, in their final group game and attempt to make it through to the knockout rounds.