Following a narrow victory over Scotland in the first round of Group D fixtures, England went into this match hoping to seal their place in the last 16. Their opponents on Friday night, Carlos Borrello’s Argentina, were desperate to get their first win of the tournament. The South American’s opening game ended in a stalemate with Japan, making three points in this encounter all the more essential.

Despite the need for a win, Borello’s side showed little intent going forward, eventually succumbing to a 1-0 defeat. This tactical analysis will examine how England managed to edge their way into the knock-out stages.

Phil Neville made four changes to the personnel for this battle, while sticking with his preferred 4-1-4-1 system. Chelsea defender Millie Bright failed to recover fully from a knock picked up against the Scots, with Manchester City‘s Abbie McManus taking her place. Having scored the winning goal in that game, Ellen White made way for Jodie Taylor up front. Reading’s Jade Moore took Keira Walsh’s spot at the base of midfield, while goalkeeper Carly Telford was chosen ahead of Karen Bardsley. 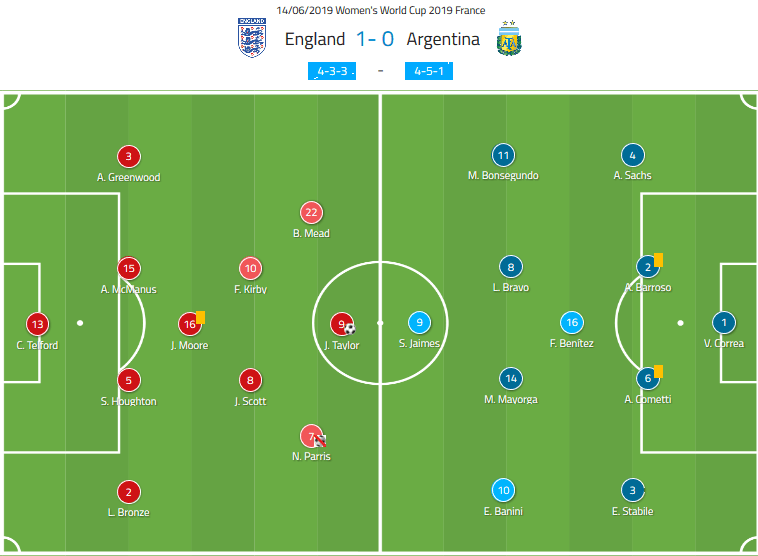 The Argentines went with their usual 4-5-1, focusing on maintaining a compact defensive unit. Experienced Lyon striker Sole Jaimes was chosen to lead the line, with Estefania Banini and Florencia Bonsegundo bringing width to the attack. The only alteration made from the side that drew with Japan saw Virginia Gomez replaced by Adriana Sachs at right-back.

As was the case in their previous game, Argentina’s primary focus was on retaining defensive solidity throughout. Whenever England moved the ball out wide, the defending team shaped up with two banks of four and a screen player between the lines. The ball-far winger looked to prevent England from switching the play.

The image below illustrates this. The back four maintain short distances on the edge of the penalty area, with defensive midfielder Miriam Mayorga in front to cover the space between the lines. Striker Jaimes drops off to complete the second line of four just in front of Mayorga.

Bonsegundo is positioned on the far side to reduce the space available for the attacking side to switch the play. The objective was to force England out wide before applying pressure against the touchline in the hope of completing a turnover. 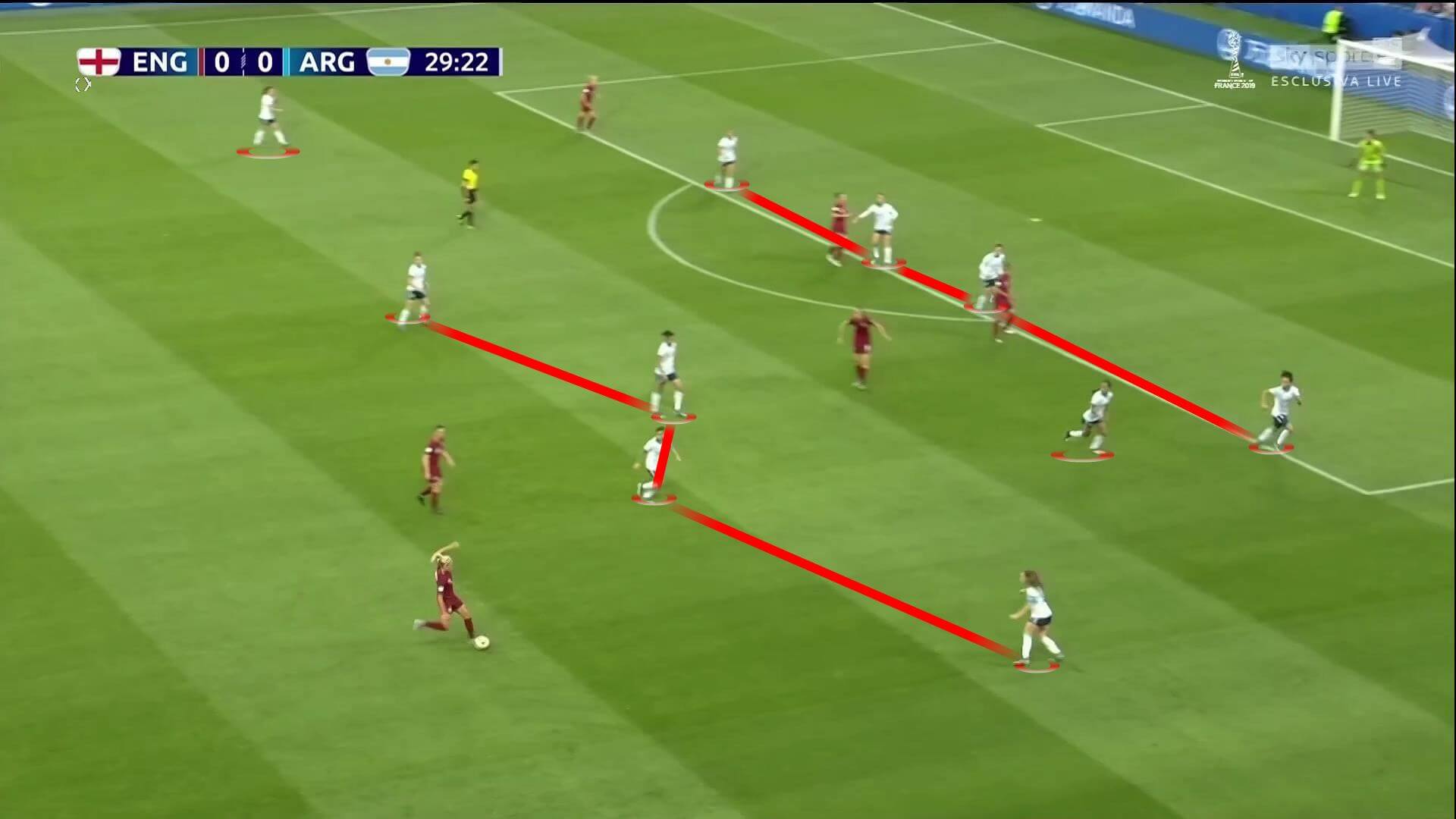 Pressure was rarely applied to the centre-backs in possession, with Borrello’s team focusing on a reactive approach. For the vast majority of the game, Houghton and McManus were given time and space to dictate the play. They looked to pass from side to side, moving the opposition while waiting for gaps to open up within the defensive unit.

In the image below, we see Argentina’s highest defending player approximately 18 yards away from the ball-occupant. Their intention was to keep short distances between each other, both horizontally and vertically. 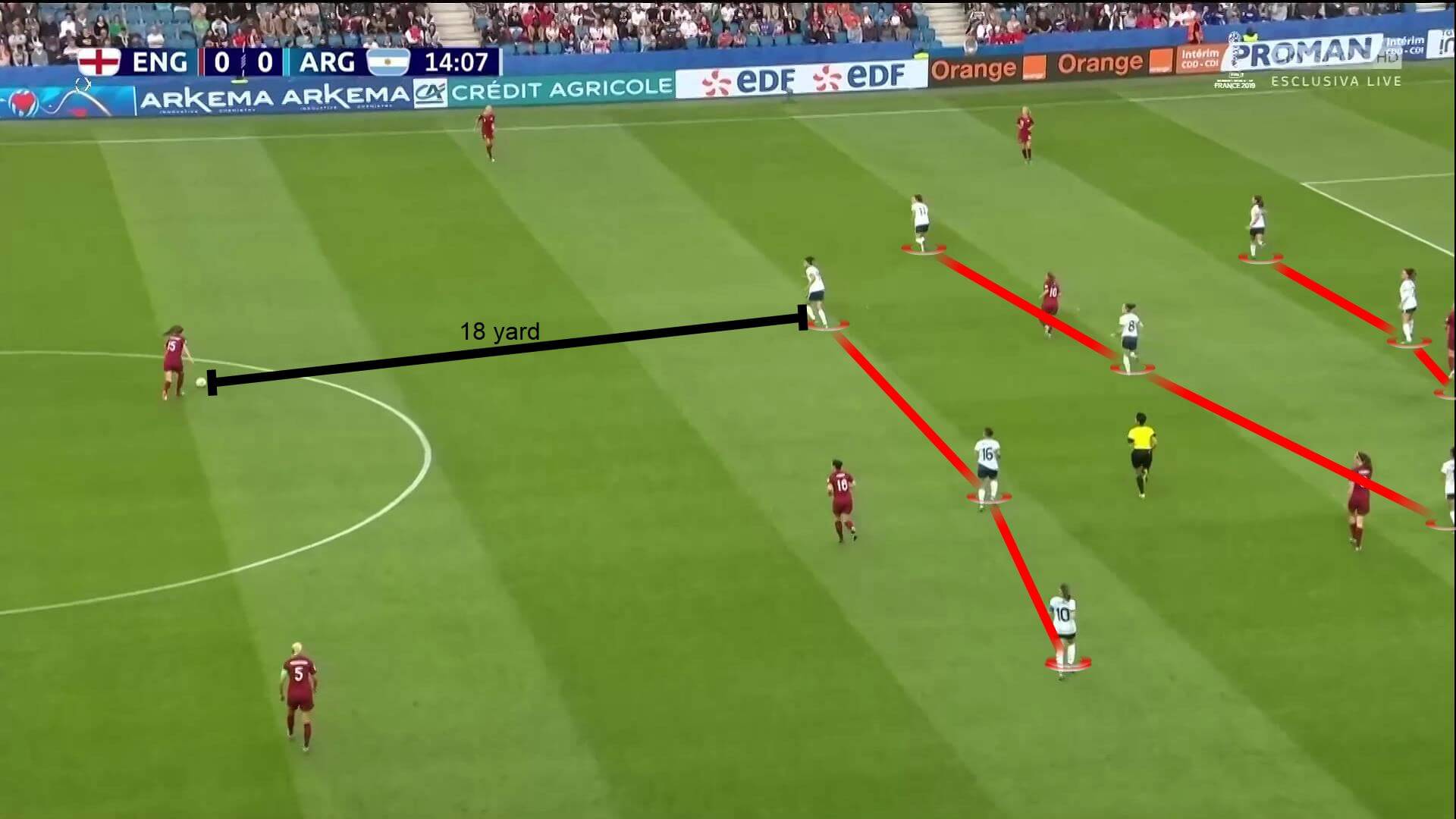 In moments of transition between attack and defence, Argentina’s negative approach was even more extreme. As shown in the next graphic, they rarely applied counter-pressure upon a loss of possession high up the field.

Instead of closing in on the space around the ball and forcing an immediate recovery, the attacking players would turn around and move back towards their own goal to prepare for the next phase of defending deep. 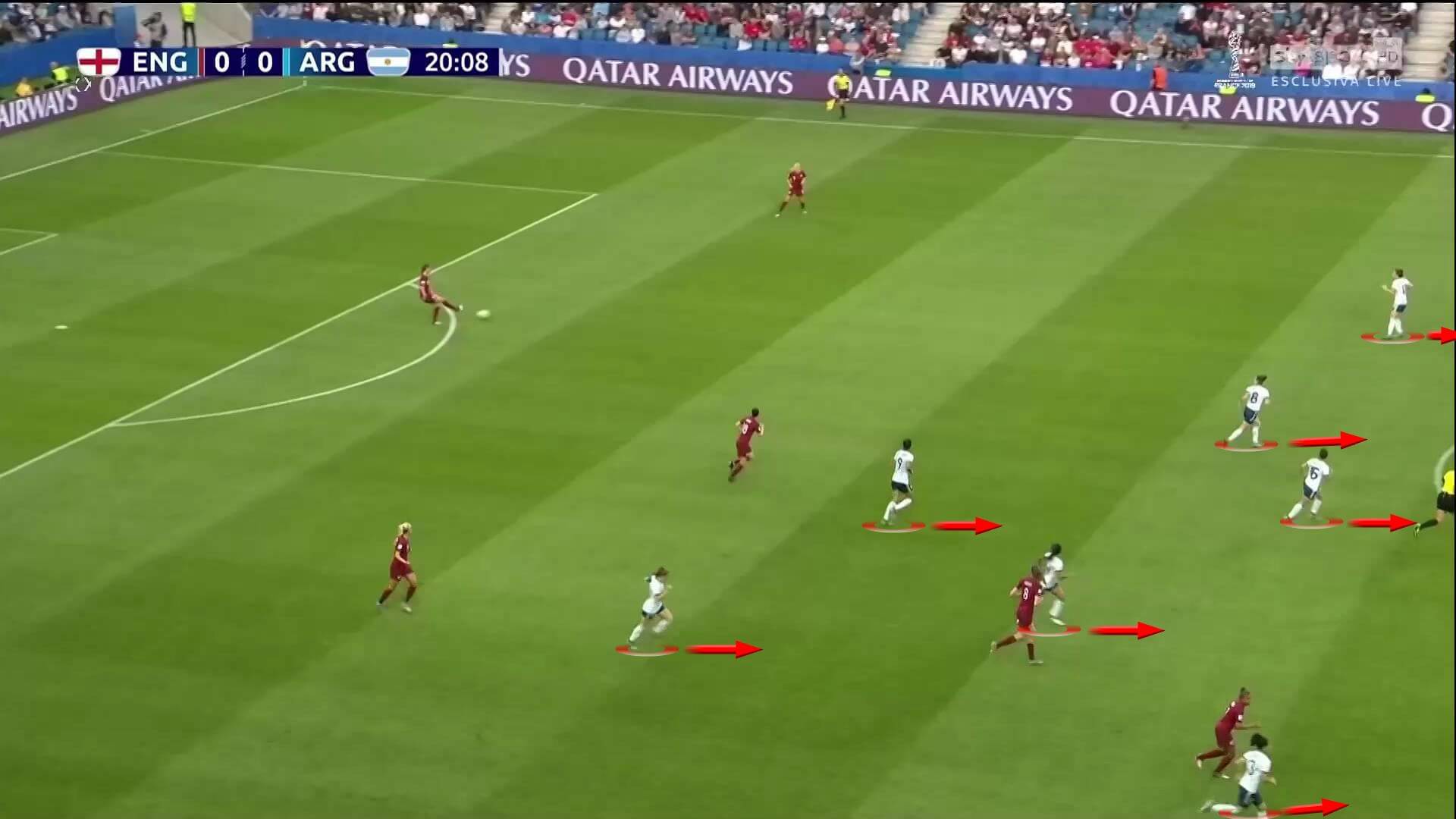 Argentina recorded just 24% possession during this game, 4% less than they managed against Japan. They made 95 successful passes, compared to England’s 470. Their shot tally ended at 2, with an xG of 0.08.

Phil Neville’s main approach to breaking down Argentina’s low block was to try and create isolated scenarios in wide areas. Nikita Parris and Beth Mead are both highly skilled in 1v1’s, and the objective was to exploit their talents in order to take defenders out of the game.

As we saw previously, the Argentines generally sat off their opposing centre-backs, allowing them to carry the ball forward. Houghton and McManus often dribbled towards the first line of defending players in order to draw more engagement, opening up space behind them.

The sequence below illustrates this, with Houghton drawing pressure from two opponents. This creates more space for Parris to exploit on the right wing. 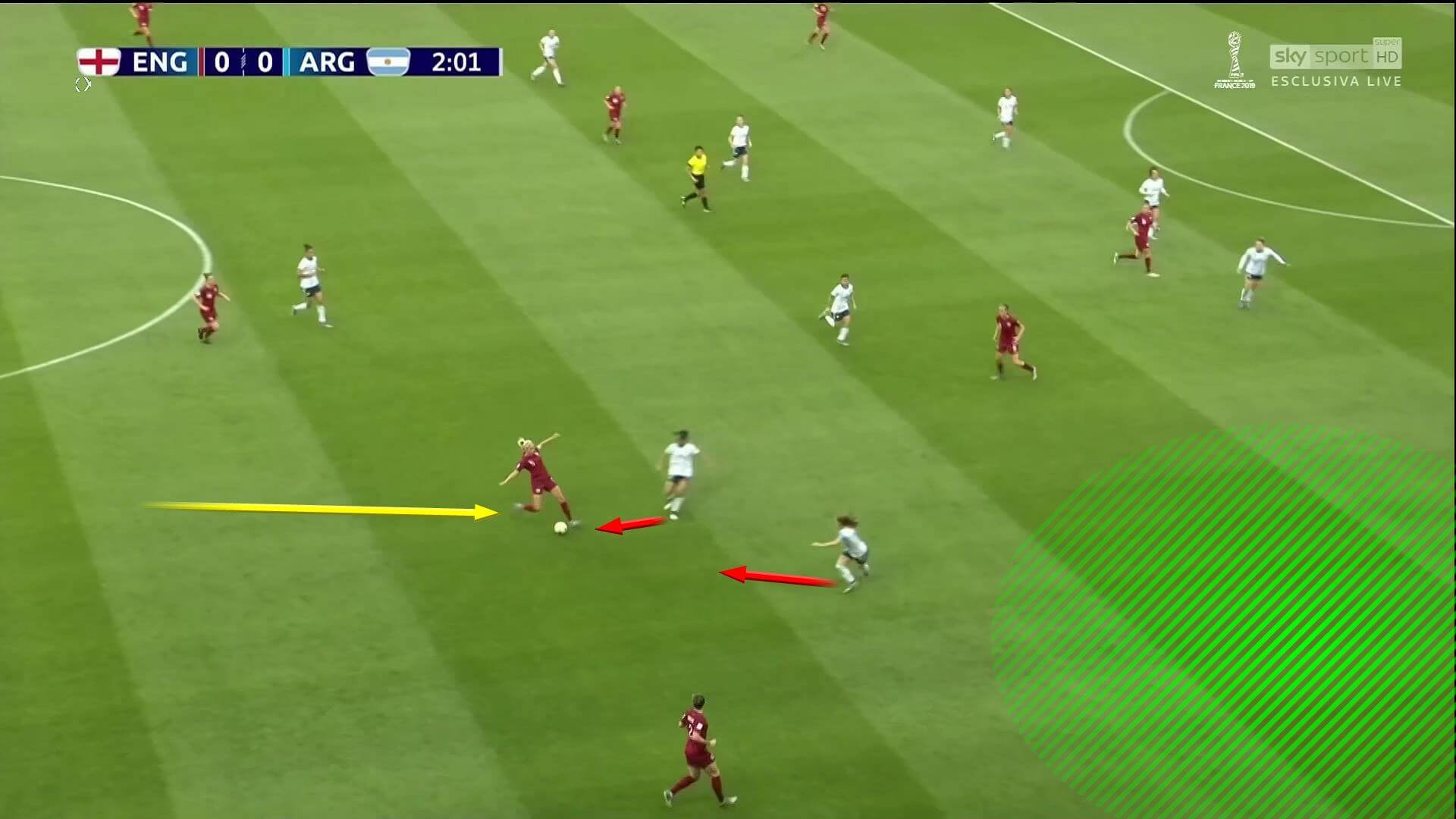 Now that isolation has been achieved, Parris can use her pace and close control to bypass her marker. Having taken the ball past Eliana Stabile, the Lyon attacker delivers a cross into the box, with the danger eventually cleared. 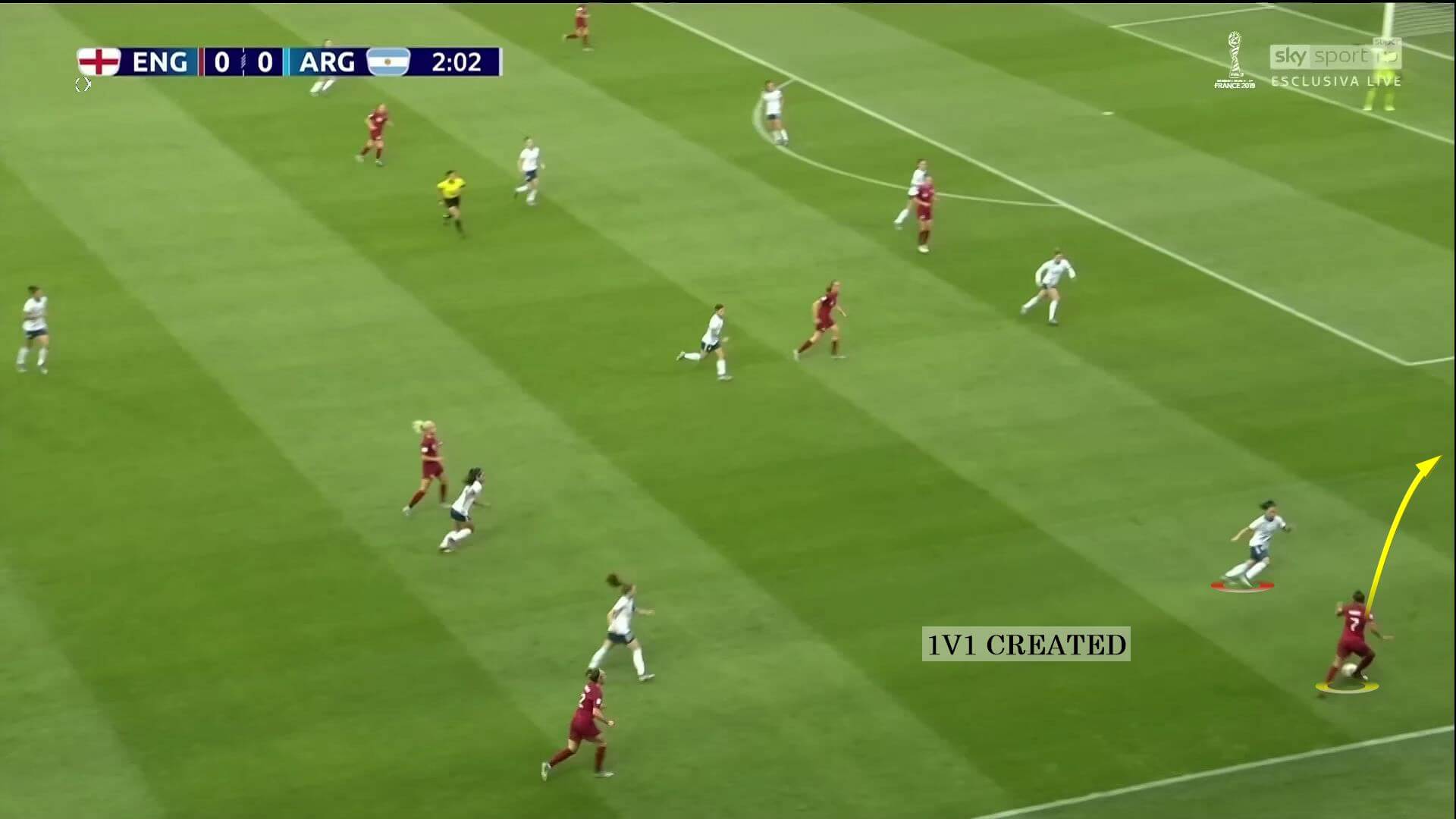 In the next example, McManus plays a bounce pass off Jill Scott. This action leads to more engagement in midfield, while Frank Kirby also positions herself in line with the ball-far fullback. The intelligent use of possession and positional play means that Mead finds herself free on the left.

The Arsenal winger receives the switch pass from McManus and drives towards goal, ultimately stopped in her tracks by the opposing right back. 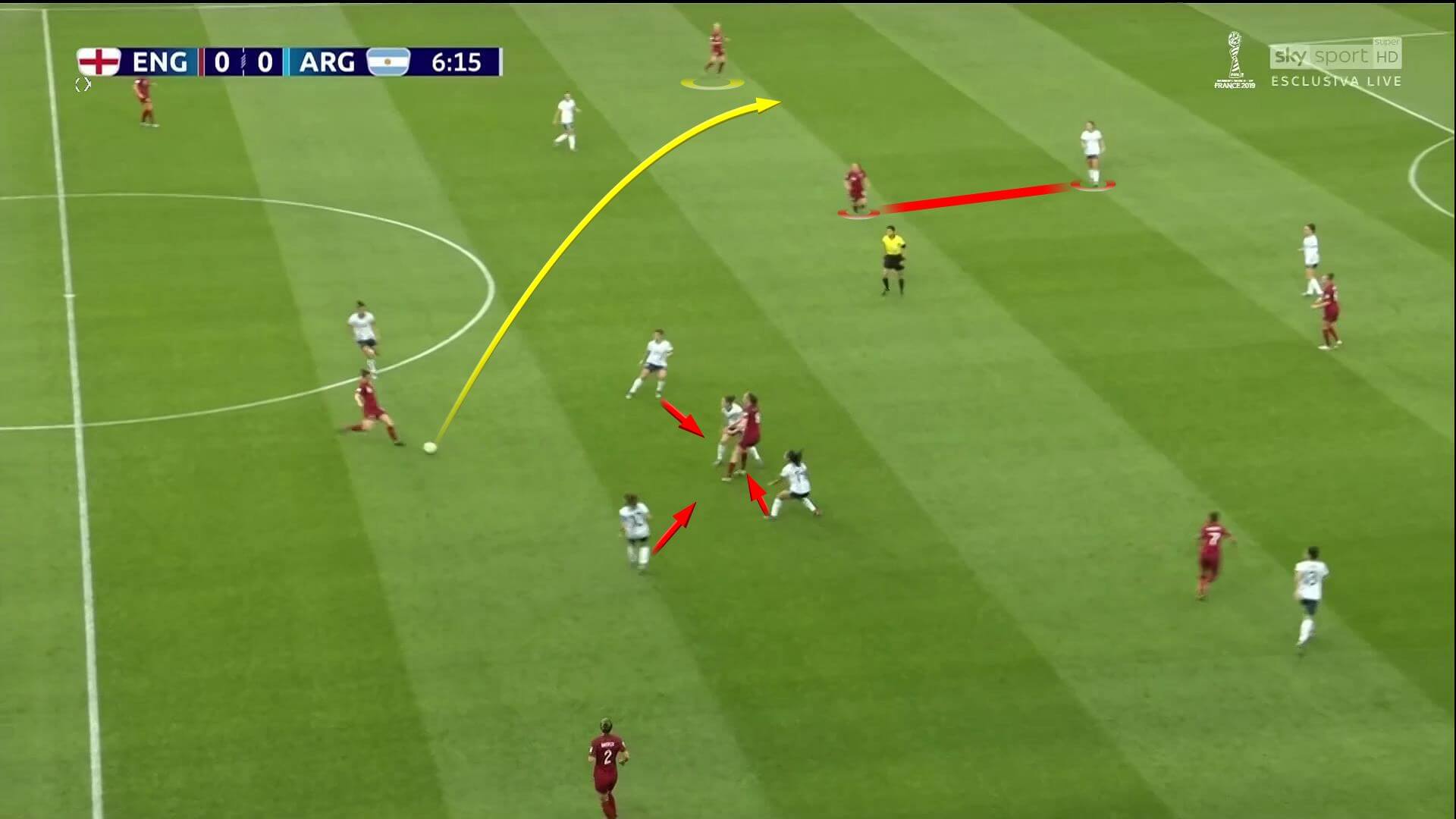 Quick switches of play formed an important part of England’s chance creation in this game. Pivot player Moore regularly looked to direct the play towards one side of the pitch, before making the out-ball to the far-sided winger.

As shown below, Moore has received from the left and plays a lofted pass to Parris on the right. The tricky winger is once again isolated against her fullback, ultimately leading to a cross. 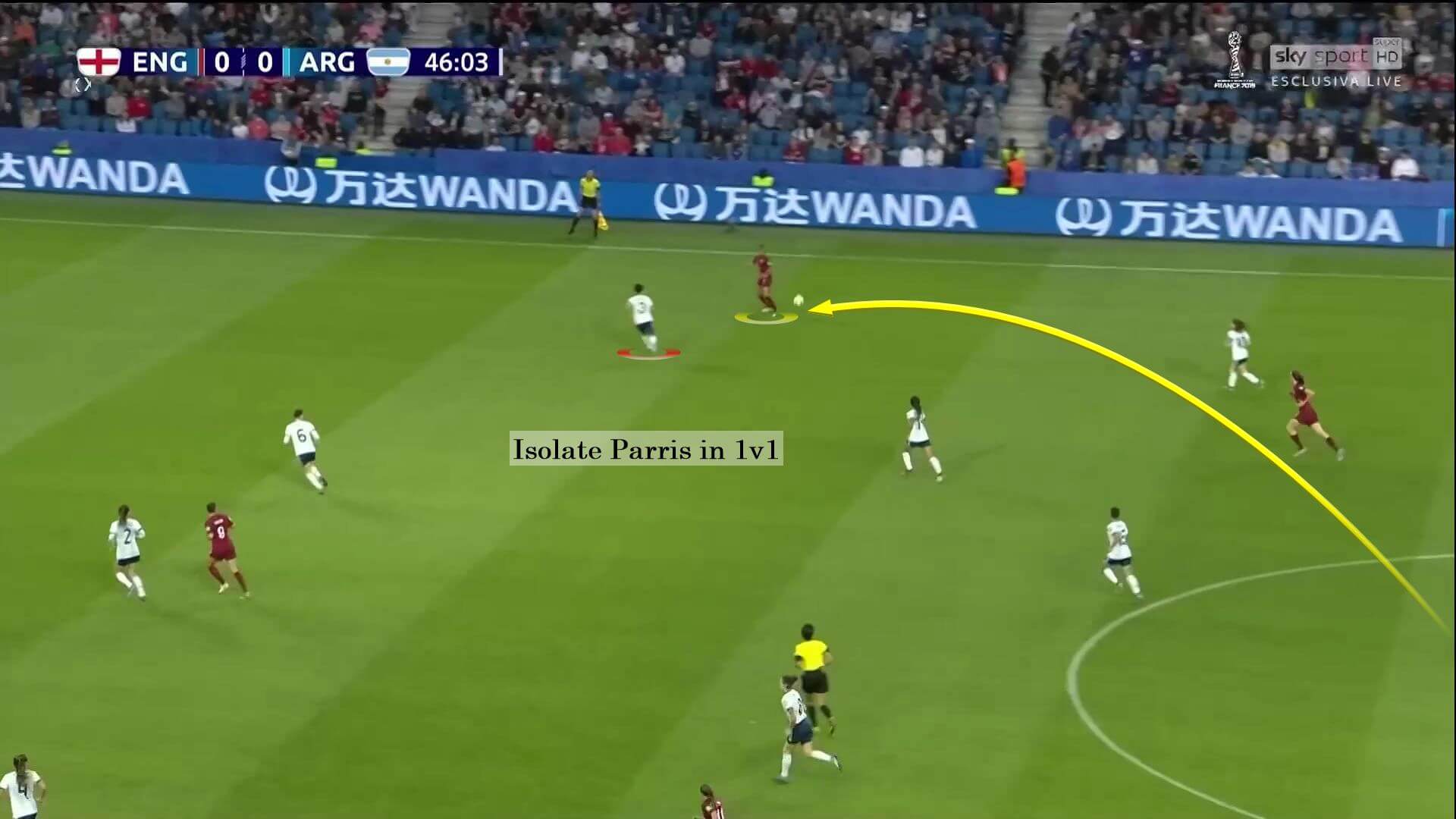 While they were successful in creating goalscoring opportunities through these methods, they couldn’t capitalise on any of them. The Lionesses registered 17 shots on goal, with goalkeeper Vanina Correa enjoying an excellent performance. Their xG finished up at 2.61, highlighting both the overperformance of Correa and the underperformance of England’s attacking players.

England also looked to create chances during Argentina’s rare moments of disorganisation. With more space in behind, Neville’s side were quick in their attempt to profit.

The image below shows the build-up to one of the game’s biggest opportunities. As was the case throughout, La Albiceleste chose not to play short from the goalkick. Instead, Correa goes long in search of second balls.

Kirby is on hand to pick up possession following an Argentinian header, before the Chelsea playmaker picks out Mead in behind. The latter’s strike is well saved once again. 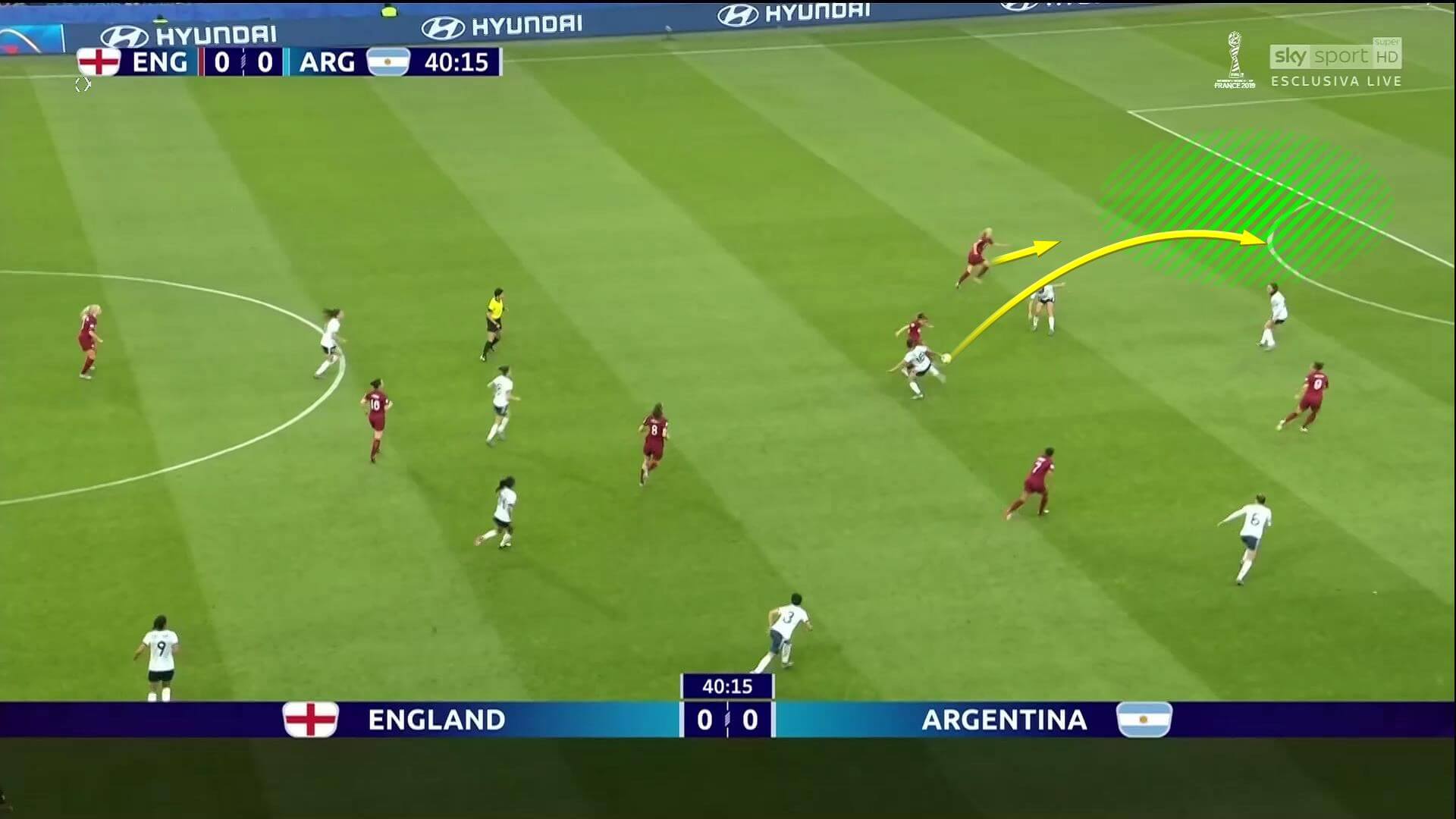 The winning goal also came from a moment of Argentina disorganisation. Following a rare attack, they lose possession high up the pitch. Unable to recover their positions behind the ball, four attackers are caught out, leaving space for England to drive forward.

Kirby carries the play into the final third, with the Argentine defence dropping deeper and deeper. 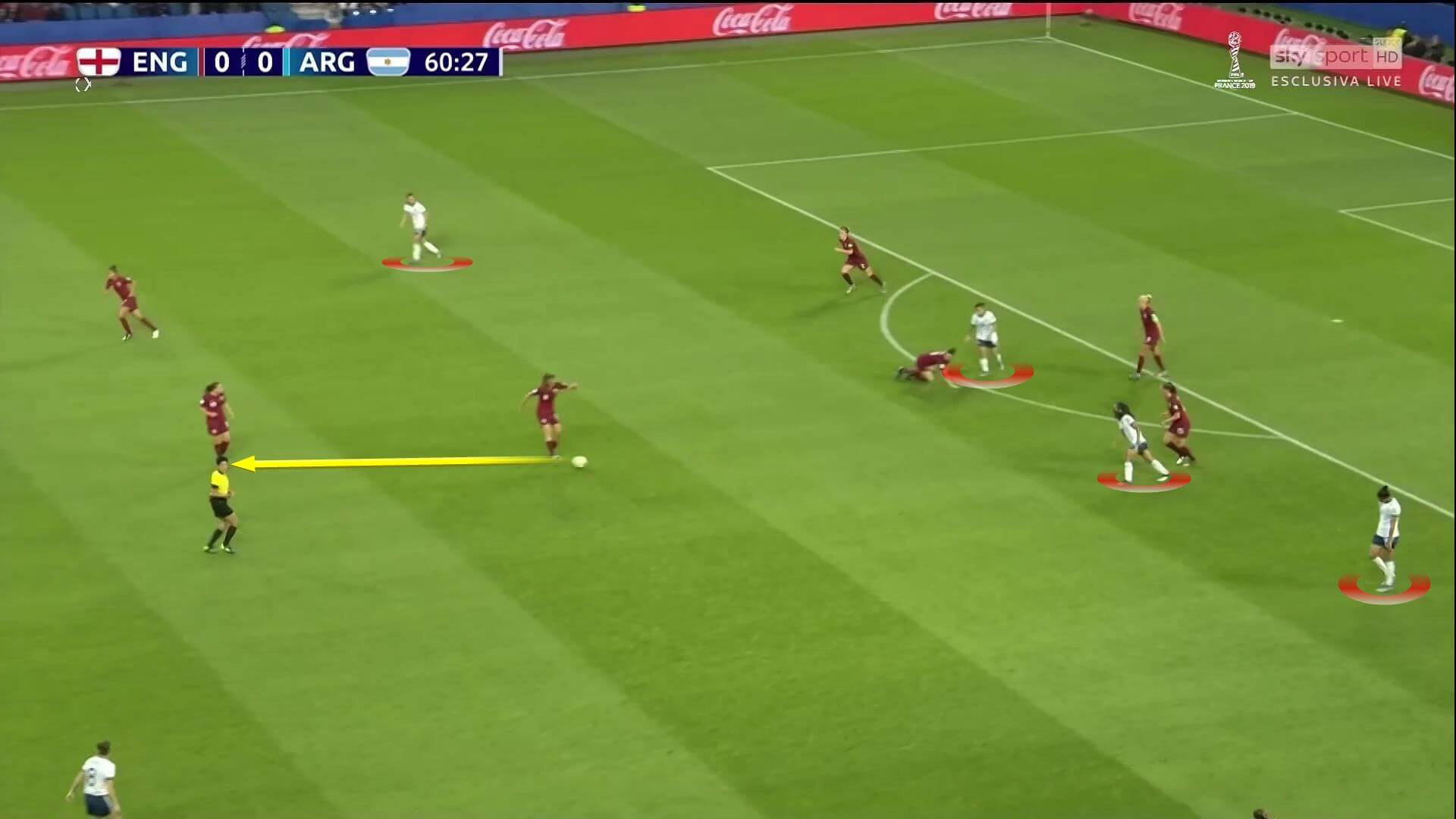 Now with just a single player advantage in the defensive phase, space is available out wide. England take full advantage, with Kirby finding Mead on the left. The winger plays a perfect ball to the far post for Taylor to fire home the decisive goal having arrived on her defender’s blind-side. 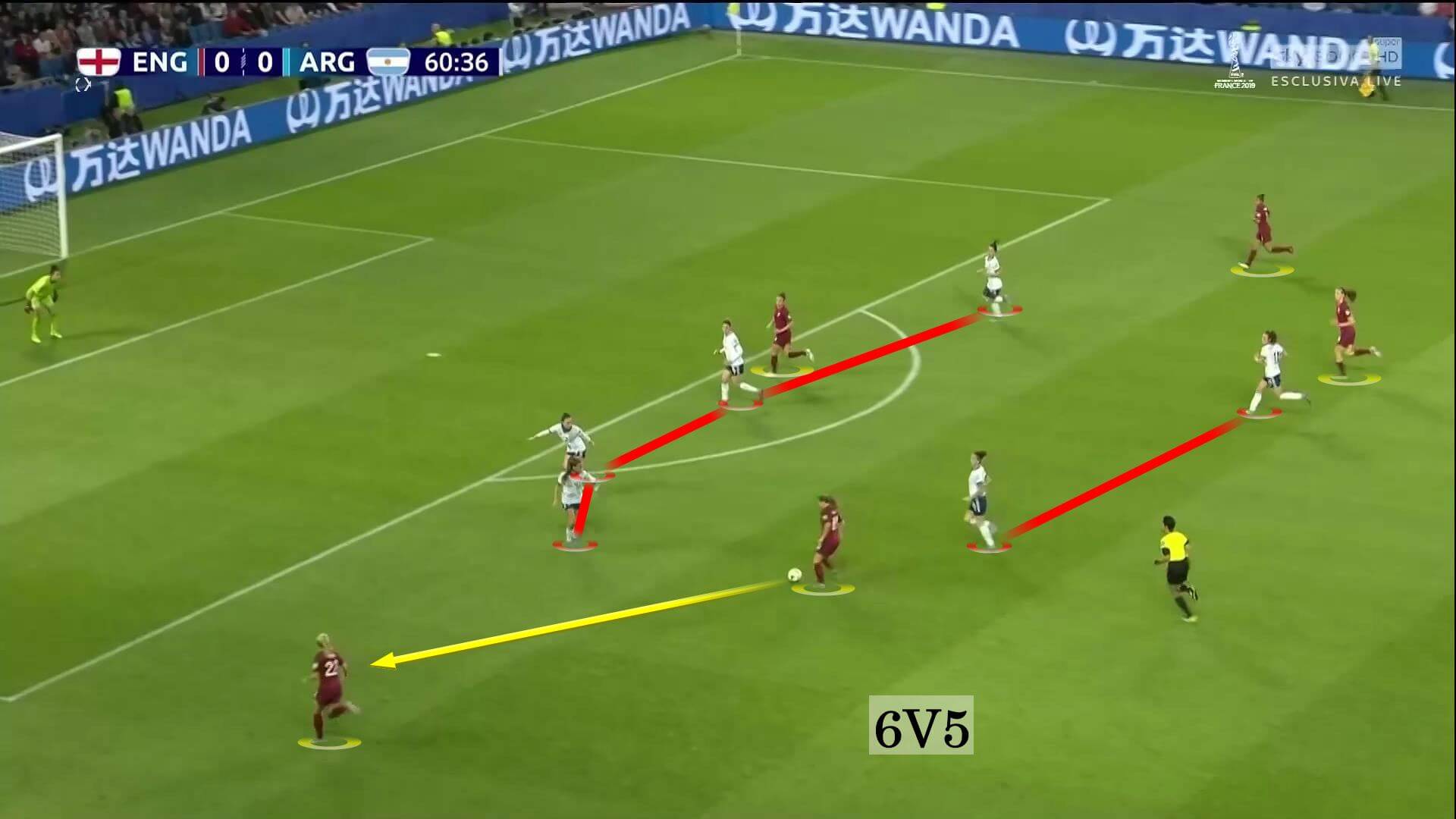 The majority of this game felt like an attack vs defence session, with Argentina ultimately performing well in their established defensive phase. However, the rare moments of transition provided extra space for England to exploit, and they managed to do just that.

It took them until the hour mark, but England finally succeeded in breaking their opponent’s resistance. The victory sees them qualify for the round of 16 with a game to spare, while their final group game against Japan will decide who finishes in top spot.

Meanwhile, Argentina’s hopes of progression are quickly fading. Three points against Scotland is a must, but they are no longer in control of their fate. Should Japan take anything from their encounter with England, the Argentines will be heading straight home.