In the opening fixture of group D, Phil Neville’s England met Shelley Kerr’s Scotland. Despite a dominant display, the Lionesses secured the narrowest of victories over their neighbours thanks to goals from Nikita Parris and Ellen White. The win sees them claim top spot early on with games against Argentina and Japan still to come.

This tactical analysis will examine how England strolled to a 2-0 lead before the break, before withstanding the Scot’s second-half fightback.

Neville set his team up in a 4-3-3/4-1-4-1 with captain Steph Houghton partnered by Chelsea‘s Millie Bright at the heart of the defence. Ellen White was favoured as the lone striker, with Jodie Taylor having to settle for a place on the bench.

Star player Fran Kirby was joined by Jill Scott in the offensive midfield positions, with Parris and Beth Mead starting out wide. Fullbacks Lucy Bronze and Alex Greenwood were expected to support the attack at every opportunity. 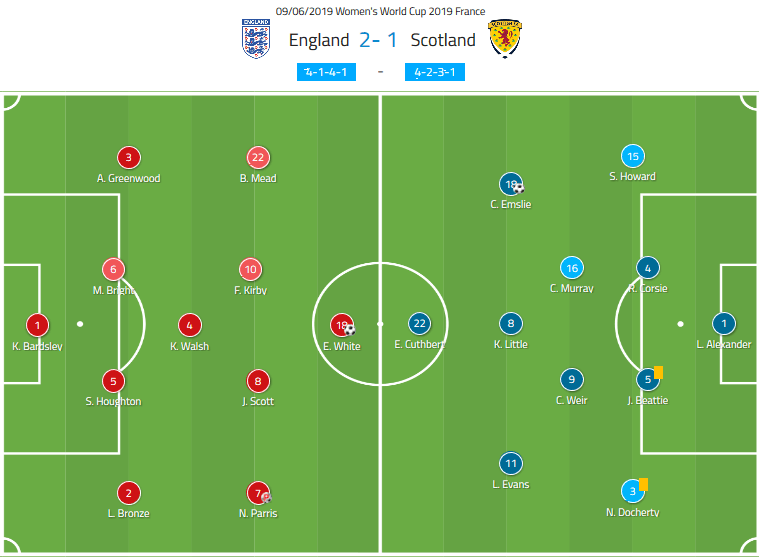 Kerr elected to line her side up in a 4-2-3-1, which became a 4-4-1-1 out of possession. Erin Cuthbert lead the line, supported by Arsenal‘s Kim Little. The flanks were occupied by Claire Emslie and Lisa Evans. Manchester City‘s Caroline Weir joined Liverpool‘s Christie Murray at the base of midfield.

For much of this encounter, England were the dominant side and looked to establish attacks through patient build-up. The Lionesses progressed the play out from goalkeeper Karen Bardsley, with the central defenders and the holding midfielder looking to feed balls between the lines.

On many occasions, Neville’s team managed to play through the thirds and pin Scotland back deep in their half. The positional set-up in these moments generally saw one of the fullbacks provide the width on one side as the winger moved infield to form a box with the striker and the two attacking midfielders.

Meanwhile, the width on the other side would be provided by the winger, with the fullback joining Keira Walsh in midfield. This inverted fullback movement allowed Kirby and Scott to push forward without worrying about the threat of counter-attacks.

The image below shows a typical structure with England in the final third. The attacking box is prepared for the cross, while Bronze and Mead occupy the wings. The defensive box behind them is ready to redirect or recover possession. 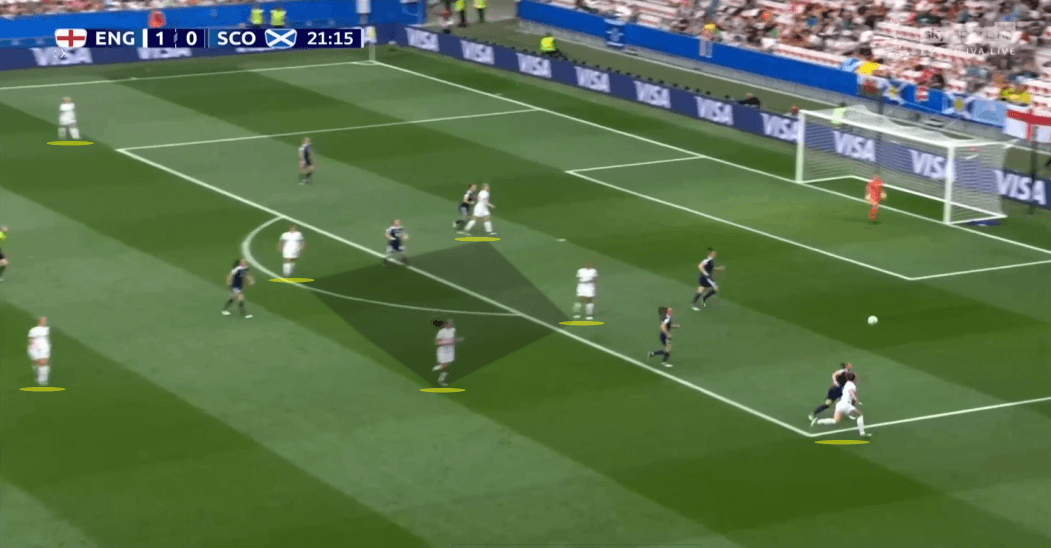 In the instance above, Lyon’s flying fullback delivers a low cross towards White on the edge of the 6-yard box. The 30-year-old centre forward’s shot is well saved at the near post by the impressive Lee Alexander.

Building through the thirds, inverted fullbacks, and low crosses show similarities with the system deployed by Pep Guardiola at Manchester City. Neville recently spoke to The Coaches Voice about his tactical philosophy, often referencing Guardiola as an inspiration.

Another comparable feature of their game involves lofted passes over the last line of the opponent’s low block. With the spaces in and around the penalty area congested by Scotland defenders, England often looked to play over the top with measured aerial passes.

The example below shows Walsh picking out White with a perfectly weighted pass, but the latter’s run is correctly ruled as offside. 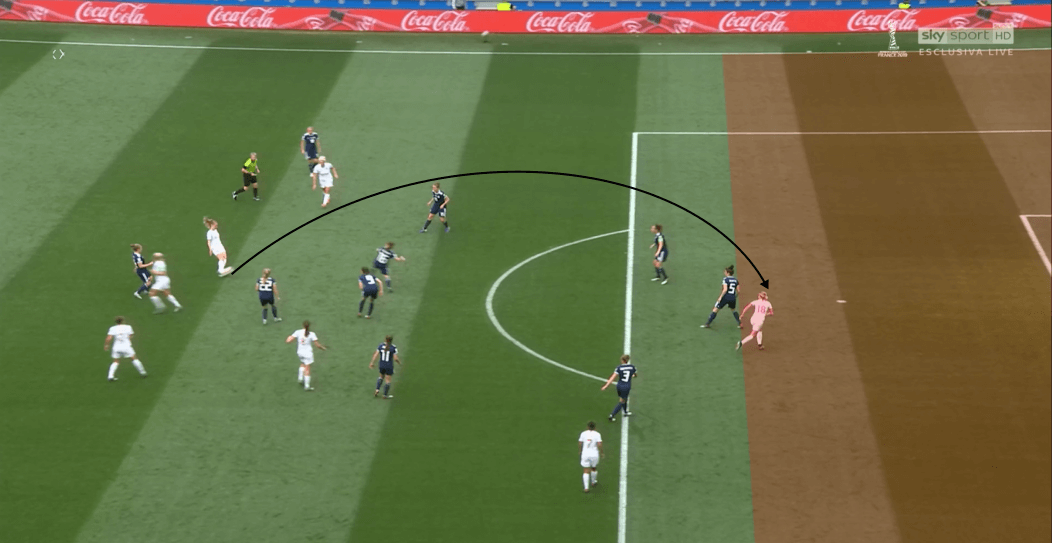 Often during their build-up phase, they would also try to feed the wingers in 1v1 scenarios. Parris is particularly skilled in these types of situations, skipping away from her marker on numerous occasions.

The opposing fullbacks were often tasked with getting tight to their winger as they received possession, leaving space to exploit in behind. Parris took advantage of this by outplaying her defender and dribbling into the new space, while Mead on the other side also achieved some success in these moments.

Both players exploited their markers eagerness by acting as decoys, too. In the image below, left-back Greenwood is the ball-occupant, while Mead drops off to receive. The Scottish right-back moves out to follow her, leaving a pocket of space in behind.

Left attacking midfielder Kirby recognises the space opening up and runs through to chase Greenwood’s ball over the top. 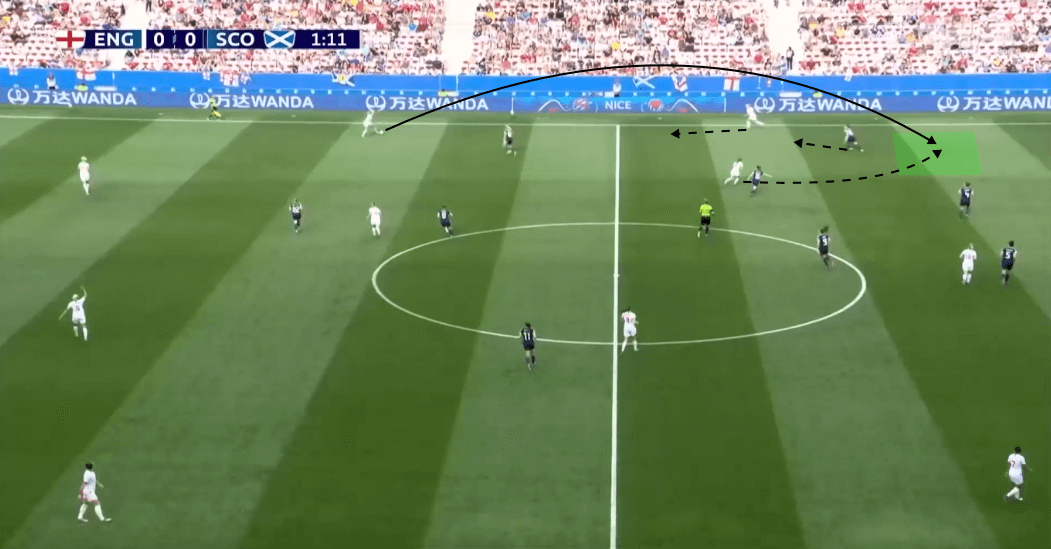 Despite their intelligent possession and positional play, England’s first goal came from a penalty. Kirby’s cross struck the arm of Nicola Docherty, before the referee made use of VAR to award the Lionesses a spot kick. Parris was on hand to fire her side in front.

Their second of the evening saw them capitalise on another mistake from the Scotland defence. The Tartan Army twice fail to clear their lines, with their rivals doubling the lead just before half-time.

Illustrated below, centre-back Rachel Corsie attempts her sides second clearance, moving out from the last line in the process. Kirby closes her down, before the ball lands in the space vacated by the defender. White finishes with composure at the near post. 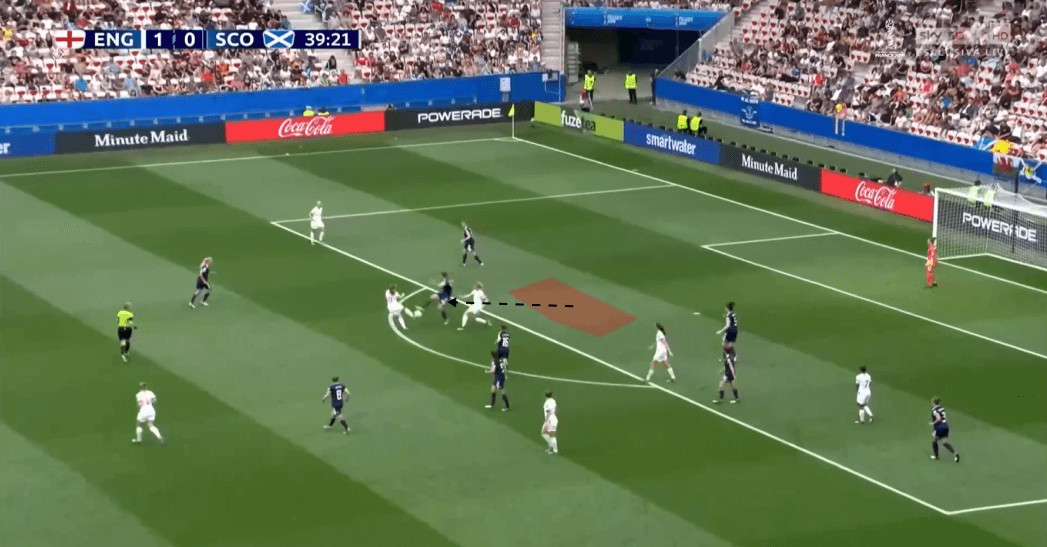 The opening 45 belonged to England, with Neville’s team dominating possession and breaking through for a number of quality goalscoring opportunities. Scotland, meanwhile, were limited to occasional counter-attacks, often ending with poor finishing.

With faint hope of a fightback, Scotland went into the second half hoping to exploit England’s minimal weaknesses. They would also need to be far more composed in front of goal.

The culprit for their handful of missed chances before the break was often right-winger Claire Emsley. Her performance would take a turn for the better in the 79th minute, however, slotting the ball past Bardsley to get her team back in the game.

The goal came after a misplaced pass by Houghton as England looked to build the play from deep. Having intercepted the attempted pass, Lisa Evans charges towards goal, drawing pressure from a number of opposing defenders.

Neville’s side had been set-up in typical fashion during the first phase of the attack, with both fullbacks pushing on to open up the space between the lines. As shown in the image below, Greenwood rushes to recover her position in the back line, while Emsley arrives on her blind-side.

Evans plays her through on goal, with the Manchester City star finishing at the near post. 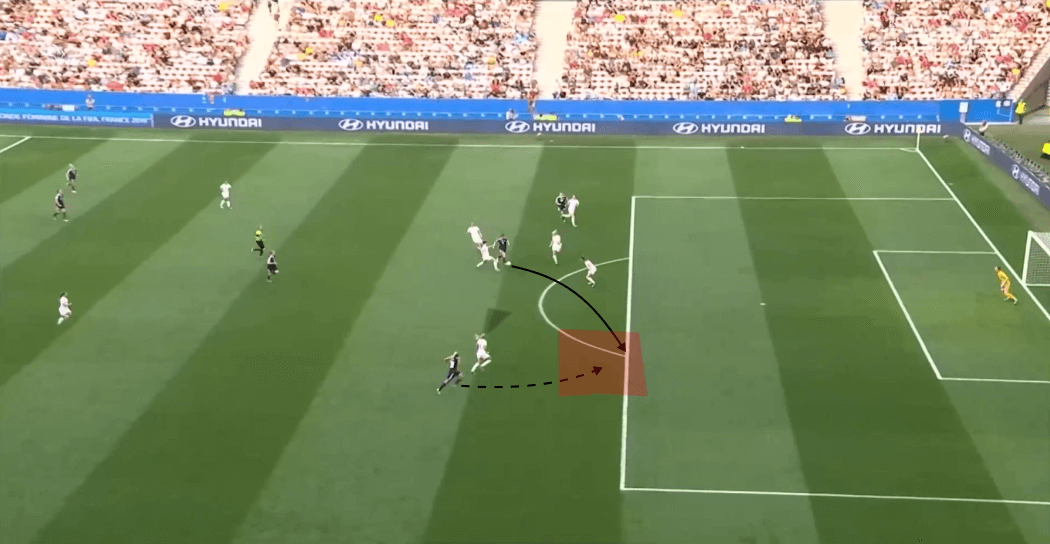 The goal came after a prior warning on the other side. As shown below, Bronze’s proactive approach to defending opens up space behind her, allowing Evans to run through and receive in the box. The Arsenal midfielder manages to get a shot on target, but her effort is saved well by Bardsley. 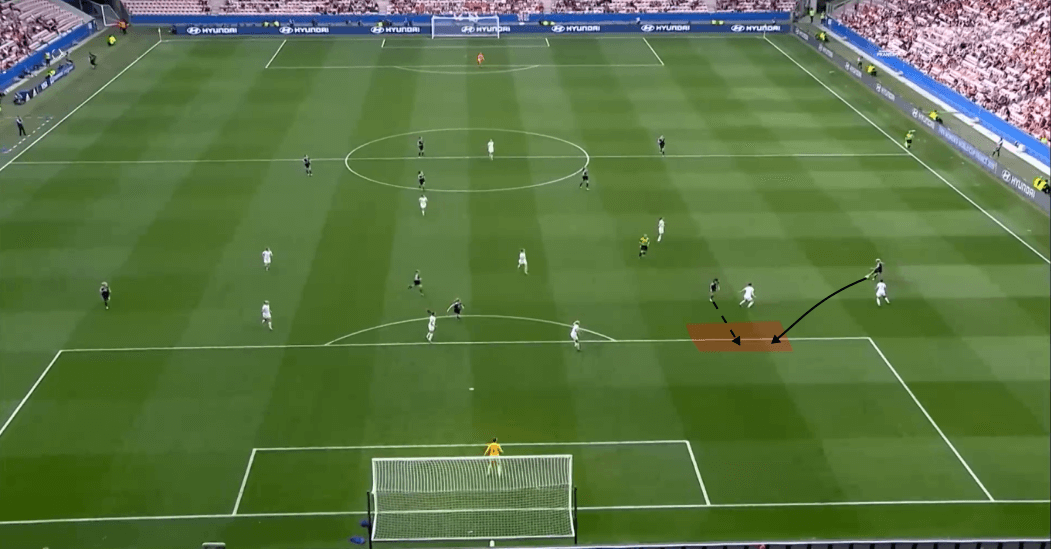 Despite creating more chances in the second half, Scotland failed to salvage anything from the game with England holding onto their lead well in the final 10 minutes. The Scot’s shot tally of six compares poorly with the Lionesses 14, Highlighting the difference in quality between the sides.

Throughout this battle, we saw how well coached this England team are in possession. Their ability to play through the thirds and break their opponents down in various stages was impressive.

It might, therefore, come as something of a surprise to see the level of detail they applied to set-pieces. Perhaps they took inspiration from England exploits at last summer’s World Cup, where Southgate’s men scored nine goals from set-piece scenarios.

Neville’s women had nine corners during this game, displaying a variety of pre-planned sequences. The example below shows Scott heading down for White to get a shot on goal, with the effort well saved by Alexander. Notice how many defenders are drawn towards Scott, who has a clear height advantage over her opponents. The focus on dealing with the immediate threat leaves space for White to go directly up against her marker. 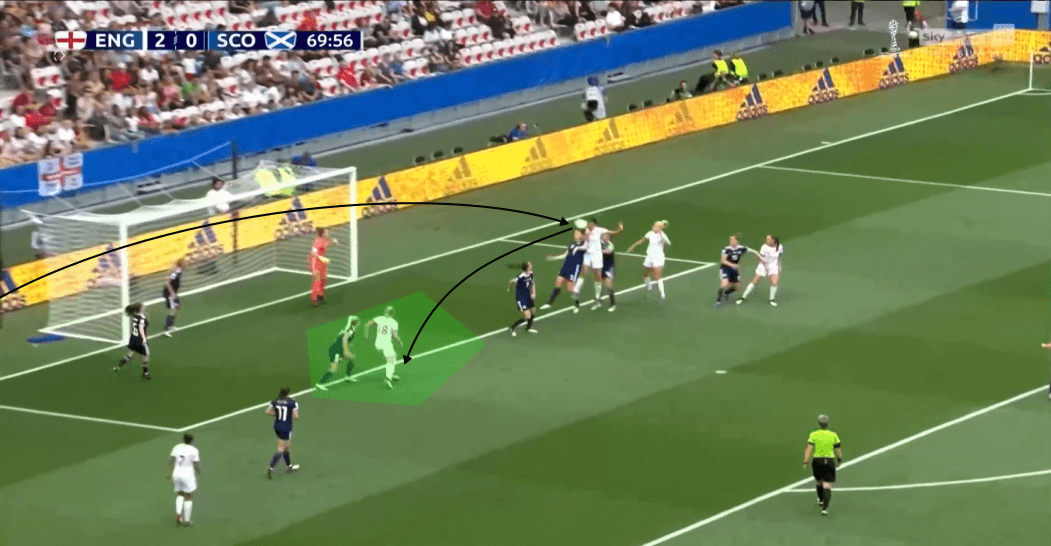 On other occasions, England crossed towards the near-post for flick-ons, while they also went short a few times, lining up shots on the edge of the penalty area. It will be interesting to see if their focus on creative set-pieces carries on throughout the tournament.

Overall, England deserved to take all three points from this game after an impressive attacking display. A victory against Argentina on Sunday is likely to secure their place in the round of 16.

Scotland, meanwhile, can take encouragement from their second-half performance despite failing to complete the comeback. Japan are their next opponents and only a win will give them any real hope of progression.