As the second fixture of Group D rolled around, both Argentina and Japan had vastly different expectations. Despite this, Argentina put on a brave performance to clinch their first point at a World Cup against a Japanese side which looked surprisingly abject in attack.

Argentina’s defensive discipline and Japan’s predictability in attack resulted in a goalless draw. This found England as the biggest winner as they are leading in Group D with three points after their win over Scotland.

This tactical analysis will assess how a resolute Argentina kept the mighty Japan at bay against all the expectations. 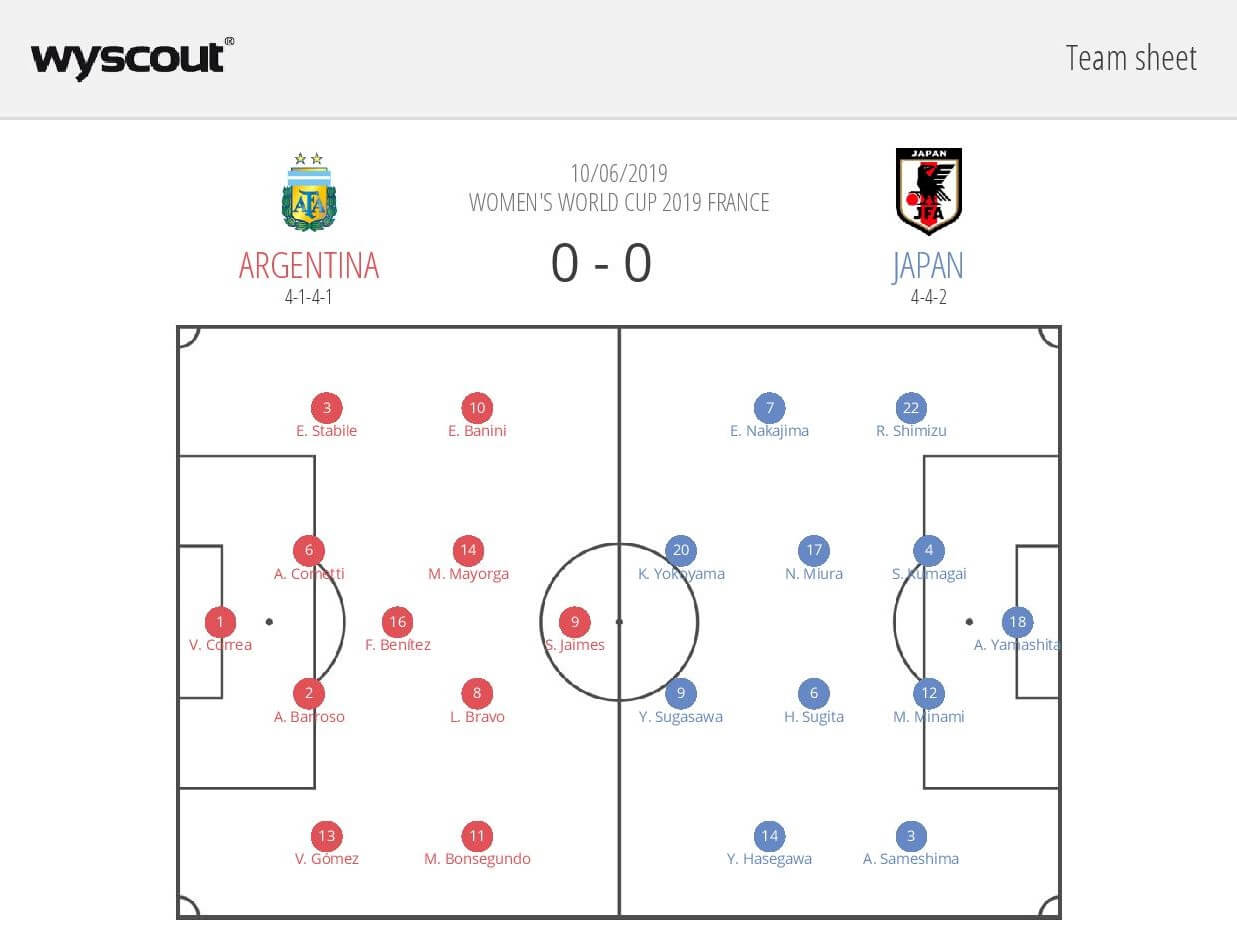 Benitez would be the player operating between the defence and attacking line. However, Benitez would often step into the forward defensive line forming a 4-5-1 thus creating a mid-high block.  This would make it extremely hard for Japan to play through or even around which their fast skill-set, and technical ability would normally allow them to. Benitez also stepped back into defence when needed, shifting the formation to 5-4-1 creating a low block. Again, stifling out Japan’s technical attack and providing superior numbers in the defensive third. 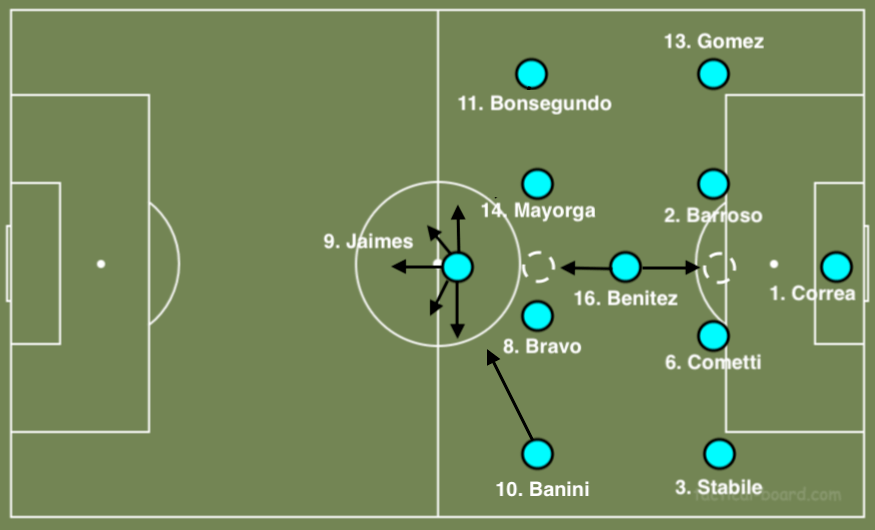 Argentina were comfortable in trying to force Japan to play the ball high and long. The average height of Japan’s first team was 5’4 with Argentina’s average only slightly higher with 5’419. Notwithstanding, three out of four Argentina defenders were 5’5 compared to Japan’s forward two of 5’1 and 5’6. Along with the slight height advantage, Argentina’s players possess a more physical side to their game, as opposed to the Japanese team.

Argentina started the game at kick off from the front foot. They made it clear that they wanted to score by trying to get up the pitch as fast as possible. However, it was soon clear that Japan had better technical players that were more capable of getting forward. Argentina, who usually line up in a 4-2-3-1 formed a 4-1-4-1 and seemed well prepared and revised to what Japan were going to throw at them in this game.

Argentina saw out most of the game in a disciplined low block. While allowing Japan a wealth of space and time on the ball towards Japan’s half and the middle of the pitch, Argentina’s horizontal compactness kept the Nadeshiko away from their goal. Japan struggled with this as their first shot on target came in the second half from a long-range effort by Yokoyama.

When Japan did get forward the Argentinian defence swarmed in numbers around the player, goal-side, preventing view of goal, blocked passing lanes and tried to force a mistake from the player in possession. In the pictures, we can see how this is incorporated. With their opportunities being blocked with a constant moving mini-wall of two and Japan struggling to find a pass, shot or cross, the players from Argentina’s attacking line would run back and dispossess the Japan players from the blind side in a Kante-esque style. 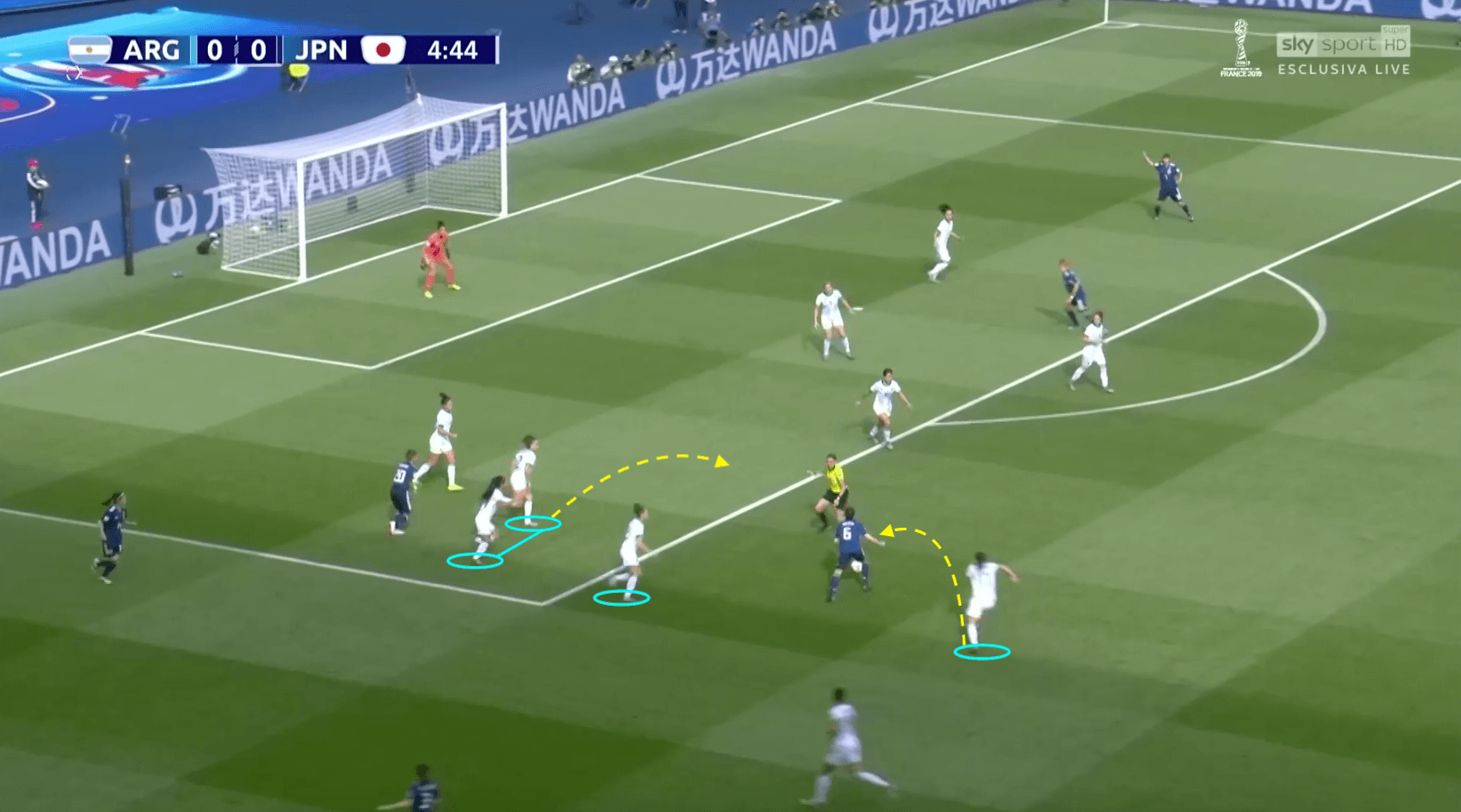 As noted in our WWC free magazine, Argentina do not like to play from the back. Instead, from goal kicks the ball is kicked into the middle area where players position for numerical superiority and look to win the second ball with either Banini or Benitez to then direct play. 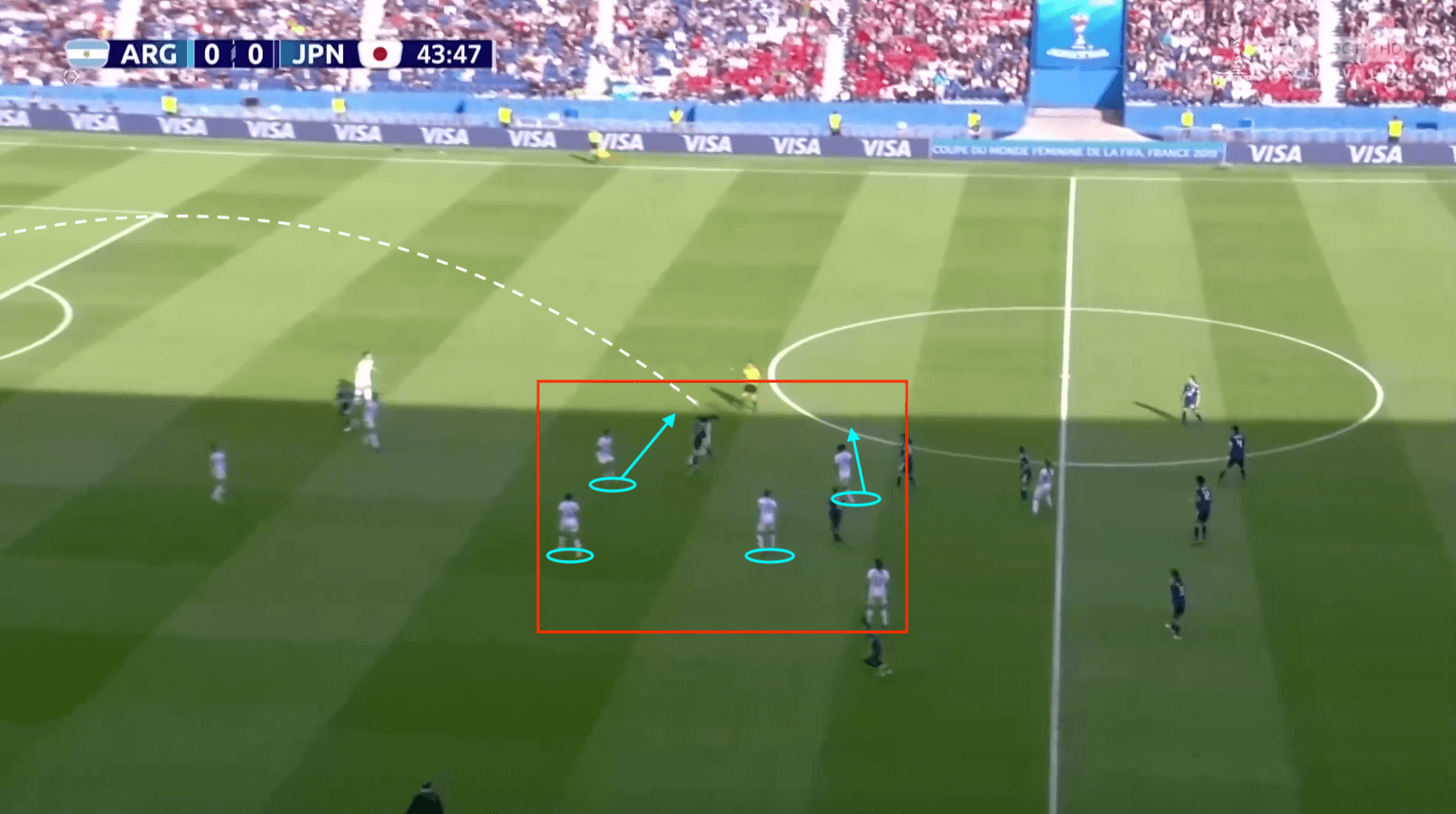 We can see in the picture above the box into where goal kicks were kicked. Argentina have one player contesting for the ball and four players ready for the second ball. Even when clear opportunities to play from the back are available, although, with slight pressure, Argentina preferred to hit it upfield to alleviate any pressure at all.

Argentina also possessed the tenacity to catch Japan out in their possession-based game at times. The South Americans sought to counter immediately after recovering the ball but lacked the technical capabilities in the final third to trouble the Nadeshiko. In addition to this, Argentina appeared to commit too many bodies to their determined defence and often left Jaimes isolated as the sole attacker when her side were on the counter.

Playing for the draw 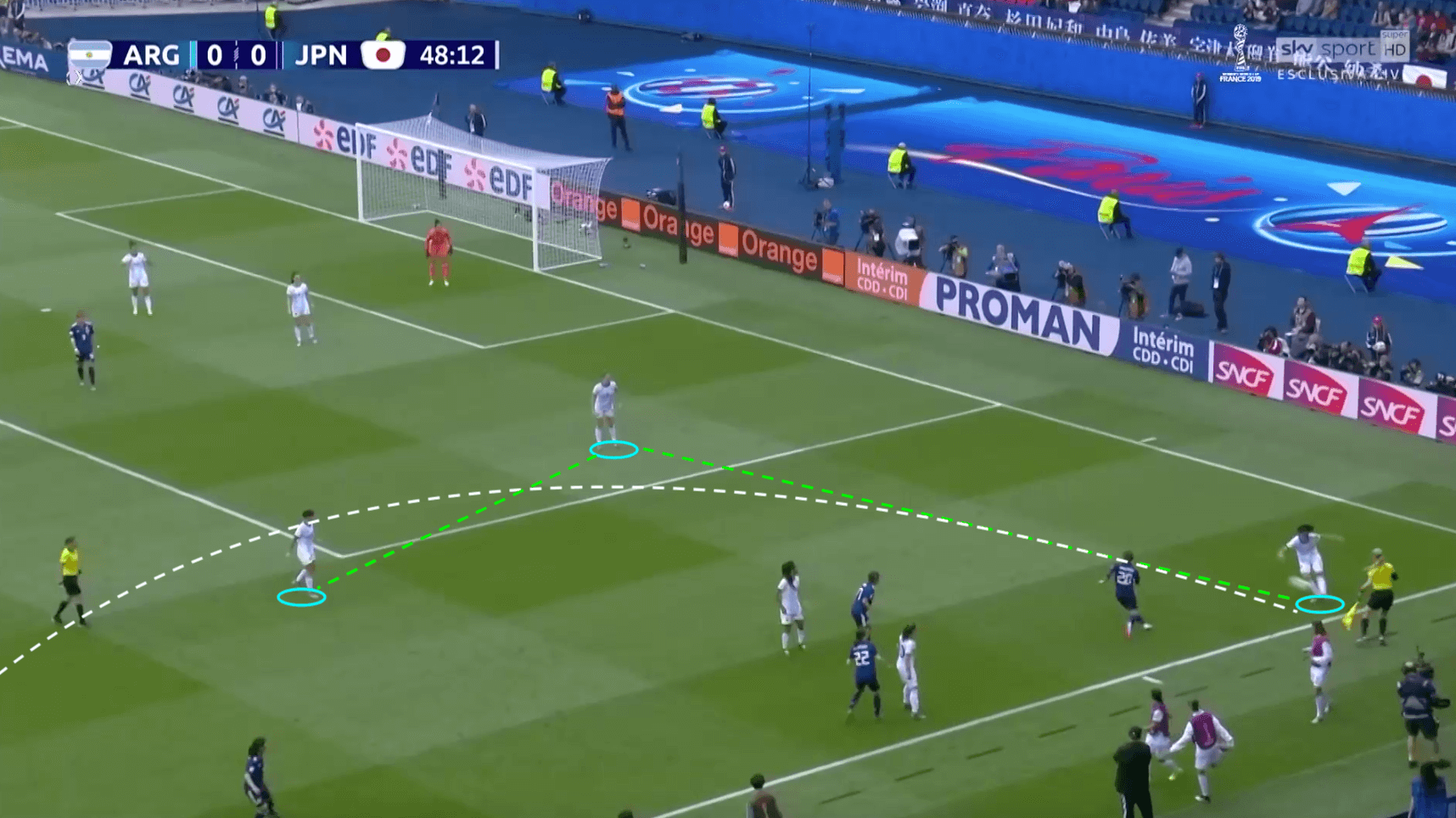 In the second half, it was clear Argentina were holding out for a point with a small chance of trying to catch Japan on the break. The Argentina defence seemed to know exactly what to do and where to be as they constantly shifted with the play to form superior numbers in front of the Japanese players. 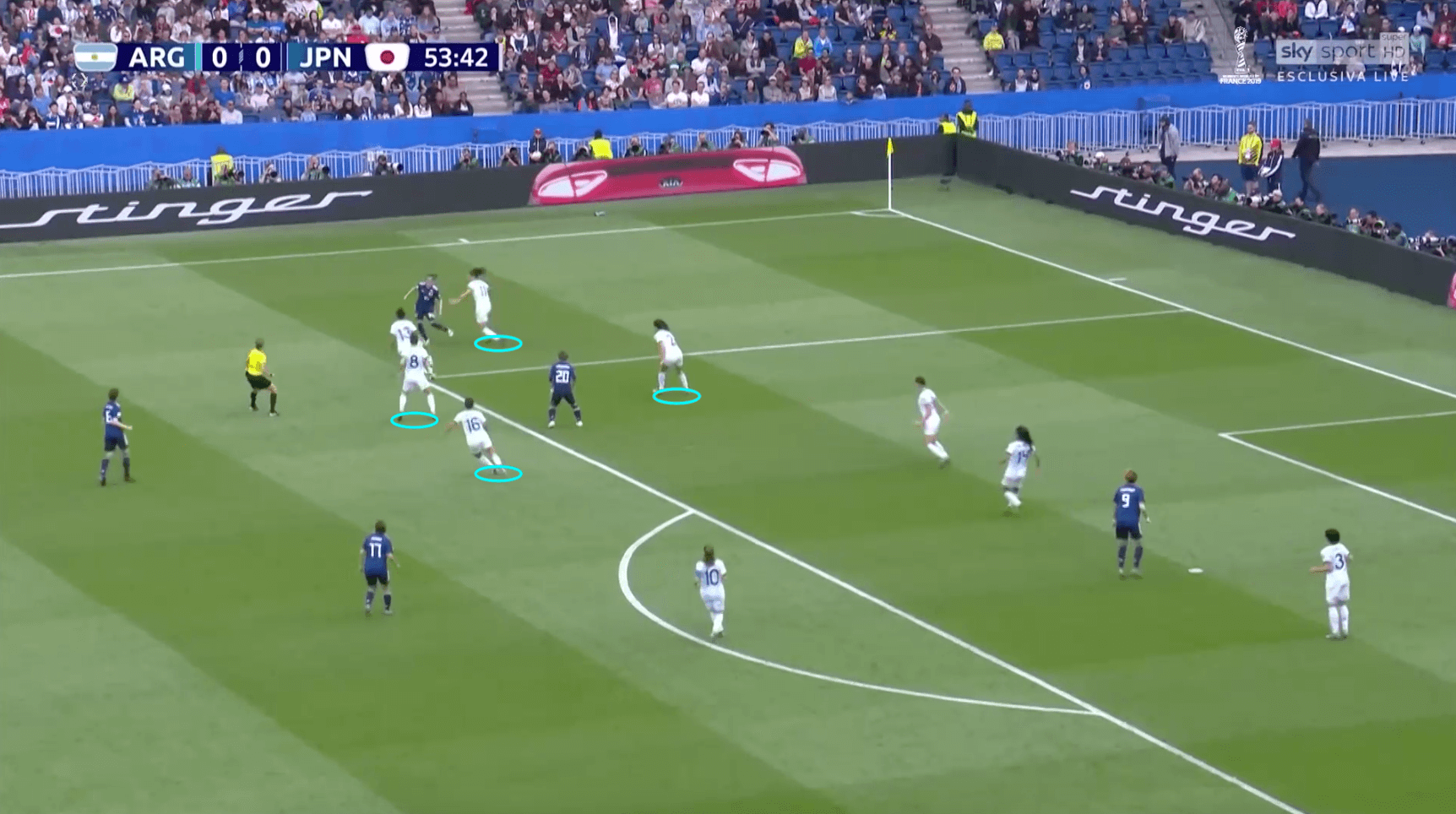 Japan struggled to open the Argentinian defence and the few shots they had on goal were massively squandered. As well as a low block and superior numbers, the Argentinians marked tight, especially against the forward running Japanese attacking players. 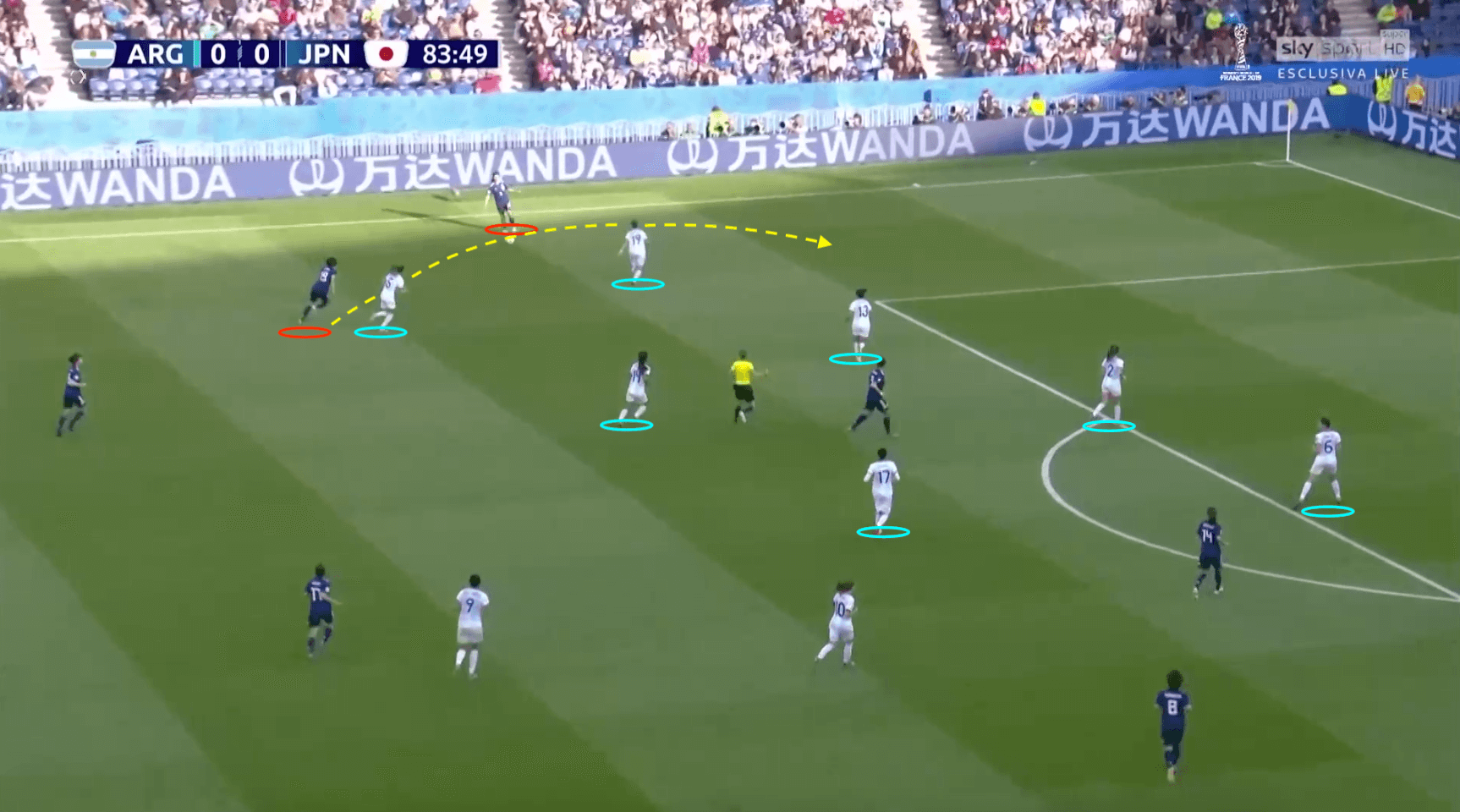 Above we see substitute Endo about to make an overlapping run on the left flank to try and break open a stubborn defence. However, substitute Santana doesn’t give her an inch and follows her tightly. This discourages the left winger from playing a through ball. A few more seconds is bought for Argentina to defend, which works. Yet another attack dealt with. 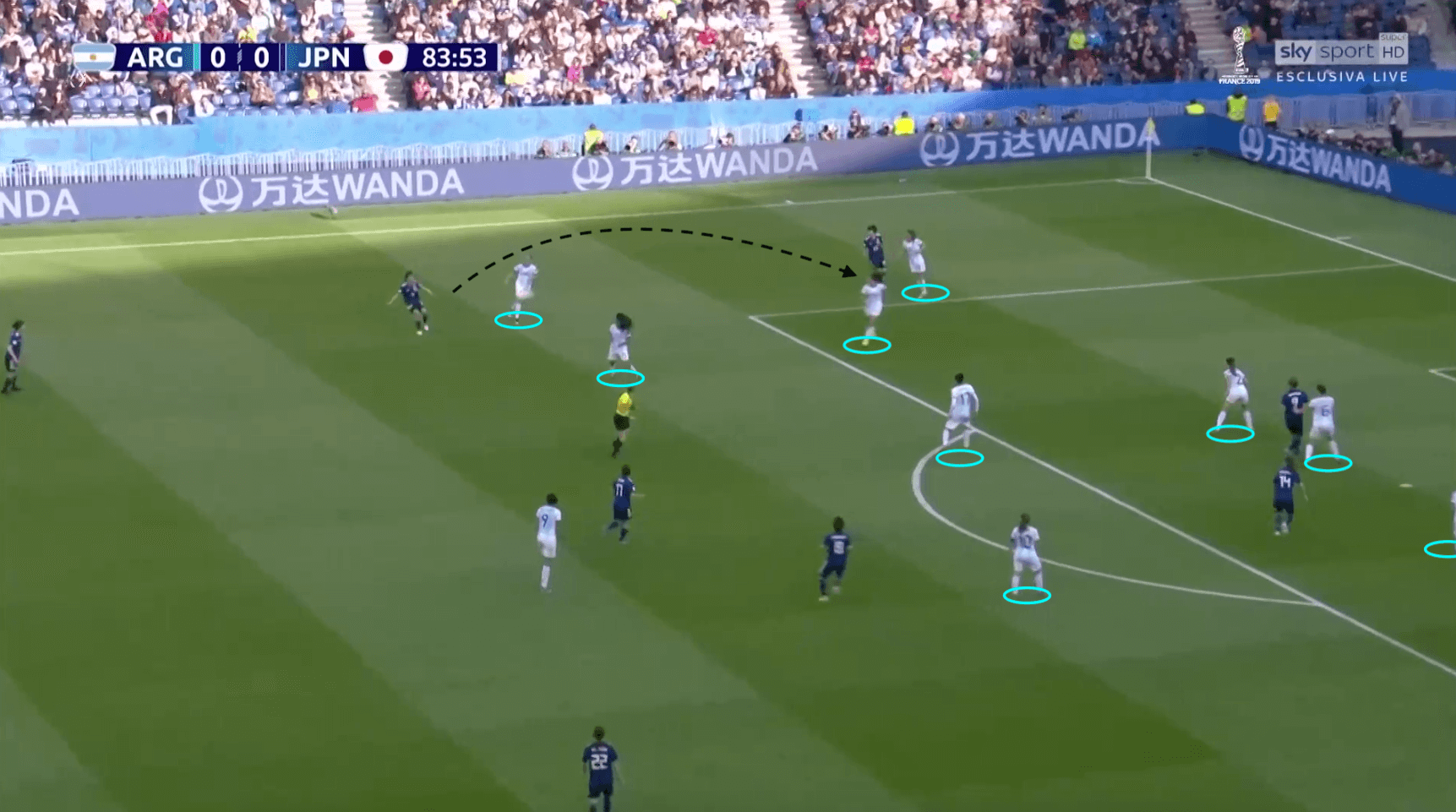 Constant, vigorous, high pressing of the ball, superior numbers, tight marking carved a hard-worked result for the Argentinians. Going forward, Argentina were a bit more disappointing. Banini held the ball up well to stall play and for her team to re-organise their shape. The team lacked decent pass completion and looked uncomfortable when in possession in the Japanese half with only 61% pass accuracy.

There was a monotonous nature to Japan’s attacking strategy, as Argentina found ease in closing the Japanese players down and limited their space and time in and around the penalty area.

Argentina’s low block meant Japan had enjoyed the lion share of possession, which they are used to. However, when Japan worked the ball into the final third, they lacked the cutting edge to even test Correa in Argentina’s goal.

To disrupt Argentina’s regimented defensive shape, one of either Yokoyama or Sugasawa dropped deep between their midfielders to pick the ball up from the defenders. The intention behind this was to drag an opposition Argentina player out of their low block, creating gaps for the technically superior Japanese team to exploit. Nevertheless, Argentina remained disciplined and held their position.

Also, a custom of this entertaining Japanese side is their width, with the involvement of their attack-minded full-backs in the build-up. But the Japanese full-backs and wide midfielders did not enjoy as much freedom as they have been used to.

Japan were able to transition smoothly to attack through the full-backs and central midfielders, but when the ball made its way to the final third, the Nadeshiko were confronted by a flurry of Argentina players seeking to overload the half and wide spaces where Japan are so dangerous.

Moreover, Japan’s 4-4-2 formation did little help to vary their progression in build-up. Neither Miura nor Sugita dropped deep frequently enough to provide Japan with a difference in transition. Instead, the option to pass it out wide to either full-back remained the go-to option for the Nadeshiko’s defence. But the play often broke down in the wider areas due to Argentina’s overload in that area, using the touchline as an extra marker.

Japan needed an injection of energy and penetration in attack and opted for the substitution of Mana Iwabuchi for Kumi Yokoyama. Iwabuchi’s supreme agility gives her the ability to play on the half-turn with ease. By dropping between Argentina’s midfield and defensive lines, Iwabuchi initially gave the Albicelestes something different to consider. But Japan reverted to their predictable style of play and pressure was beginning to show on some of the younger players.

Japan had 72% possession, the highest recorded percentage of a team to not score in the Women’s World Cup since 2011. This exemplifies Japan’s utter inefficiency in attack, despite being solid favourites, not only for this match but for the entire competition. Argentina forced Japan into taking shots from outside of the box, which incidentally were some the Nadeshiko’s best chances.

In the defensive phase, Argentina remained measured but unrelenting in the challenge. The centre-back partnership of Cometti and Barroso were a constant thorn in the side of the Japanese attackers, reading the game and winning their duels throughout the match.

However, this was not difficult, given the predictability of Japan’s attacking strategy. The likes of Sugasawa did not provide nearly enough movement or quality on or off the ball in the final third. Perhaps Japan would be better equipped in starting Mana Iwabuchi instead of Sugasawa to give them an injection of dynamism and individuality in their next game against Scotland.

Contrarily, this was a great result for Argentina and Carlos Borrello to get something from this game and physical strength played to their advantage. But, Borrello will have to think about how his team will combat a much more physical England and Scotland. Setting a low block against both teams will prove effective but only to a point.

On the other hand, playing attacking football may also play into the hands of the other teams. The next two games will not only be decisive but highly interesting from a tactical point of view.