The Netherlands will take on Cameroon in this second round of group stage fixtures. A last gasp winner from Jill Roord gave the Dutch a narrow 1-0 win over New Zealand in their opening match. The Indomitable Lionesses, meanwhile, put up a dogged defensive display against Canada. They were ultimately defeated 1-0 thanks to Kadeisha Buchanan’s header just before half time.

A win for the Netherlands would effectively help secure passage through to the round of 16 ahead of a tough match against Canada. They will be looking to have things sewn up before then. Six points would all but guarantee their position in the next round.

Cameroon will most likely be looking to scrape a point from this match. With the top three teams going through to the round of 16, a point ahead of their crunch match against New Zealand will be vital for their slim chances of progression in this World Cup.

It is likely to be another game of attack vs defence for both sides. The Dutch dominated their match against New Zealand while the Indomitable Lionesses were happy enough to sit back and defend against Canada. This tactical analysis preview will show you how the match might play out.

4-3-3 was the nominal set up used by the Netherlands in their opener against New Zealand. It wasn’t an entirely standard 4-3-3 setup, however, taking a more staggered approach. This often gave it the appearance of being more of a 4-2-3-1 shape.

Sherida Spitse was the deepest lying of the midfielders, with Jackie Groenen alongside her playing more on the front foot. They often took on the appearance of a double midfield pivot. It was clear, though, that Spitse was playing deeper with Groenen roaming to find space more.

The most advanced of the midfielders was Danielle van de Donk. She played in a quasi-No10, with plenty of license to roam forward. 2017 World Player of the Year Lieke Martens is also an important attacking outlet for the Dutch. She started on the left wing but was seen popping up in various positions along the front line. 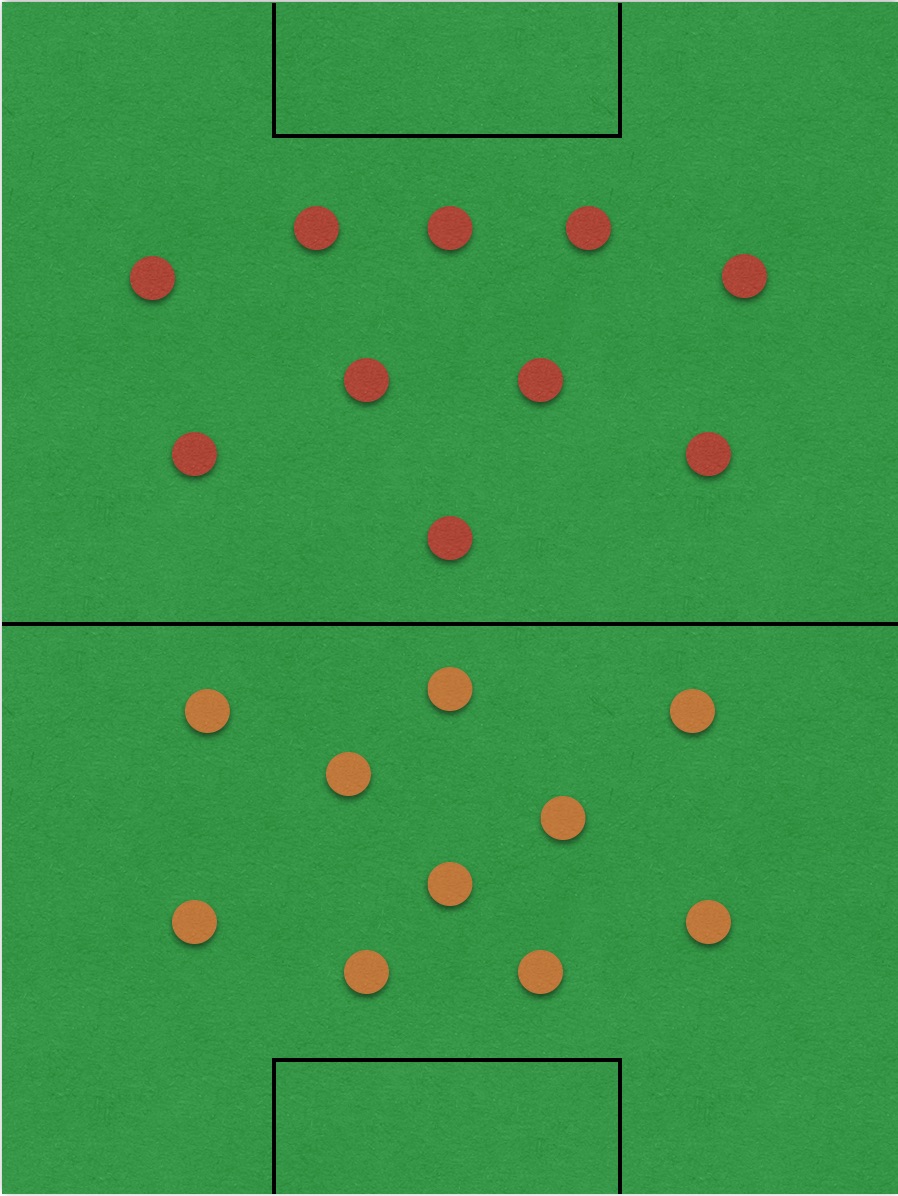 Cameroon were set up far more conservatively against Canada. They lined up in a 5-4-1, with great solidity being provided by having three players at centre back. Both Christine Manie and Estelle Johnson are excellent defenders and proved tough for Canada to break down.

The Indomitable Lionesses also seemed to congest space in the middle of the pitch, with a compact shape from the front line. This generally worked effectively, with Canada’s winner coming from a corner. It is likely they will again opt for this tactic and hope that the talent of Gabrielle Onguéné on the break will reap more rewards going forward.

The 4-3-3 formation deployed by the Dutch often took on the form of a 4-2-3-1, seeming to morph between the two throughout the match. This was generally dependent on the orientation of the midfielders.

When building from the back, both Spitse and Groenen would drop back to aid in this. Van de Donk was positioned further forward. Below, we can see how Spitse and Groenen operate in a kind of double pivot, but with Groenen slightly more on the front foot. 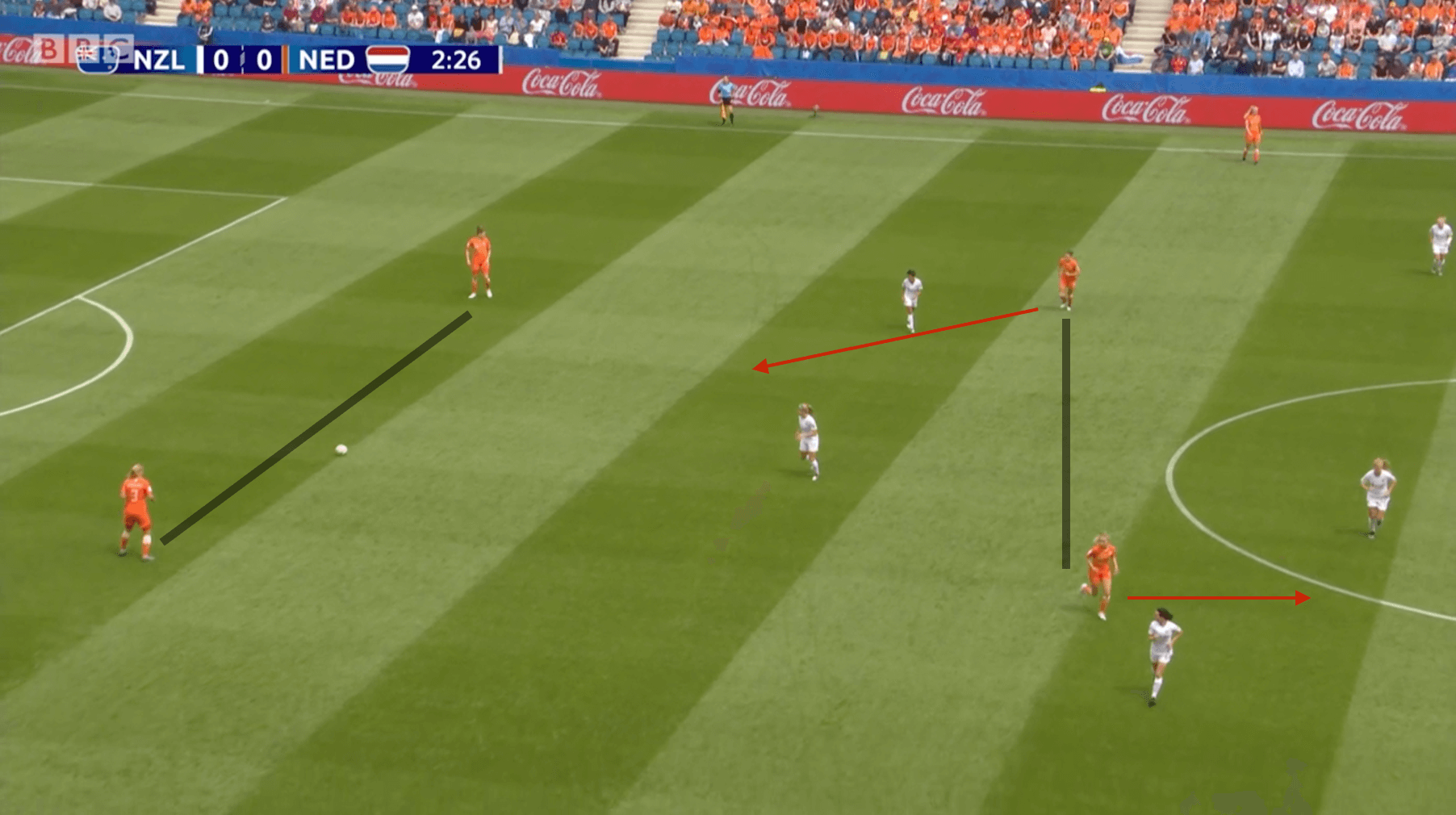 In the next image, a few seconds later, we can see Groenen has roamed into a wider and more advanced position. She is now more available to take a pass. This is while Spitse remains in more of an anchoring role. We can also see Van de Donk, circled, in a more advanced No10 style position, acting as a link between midfield and attack. 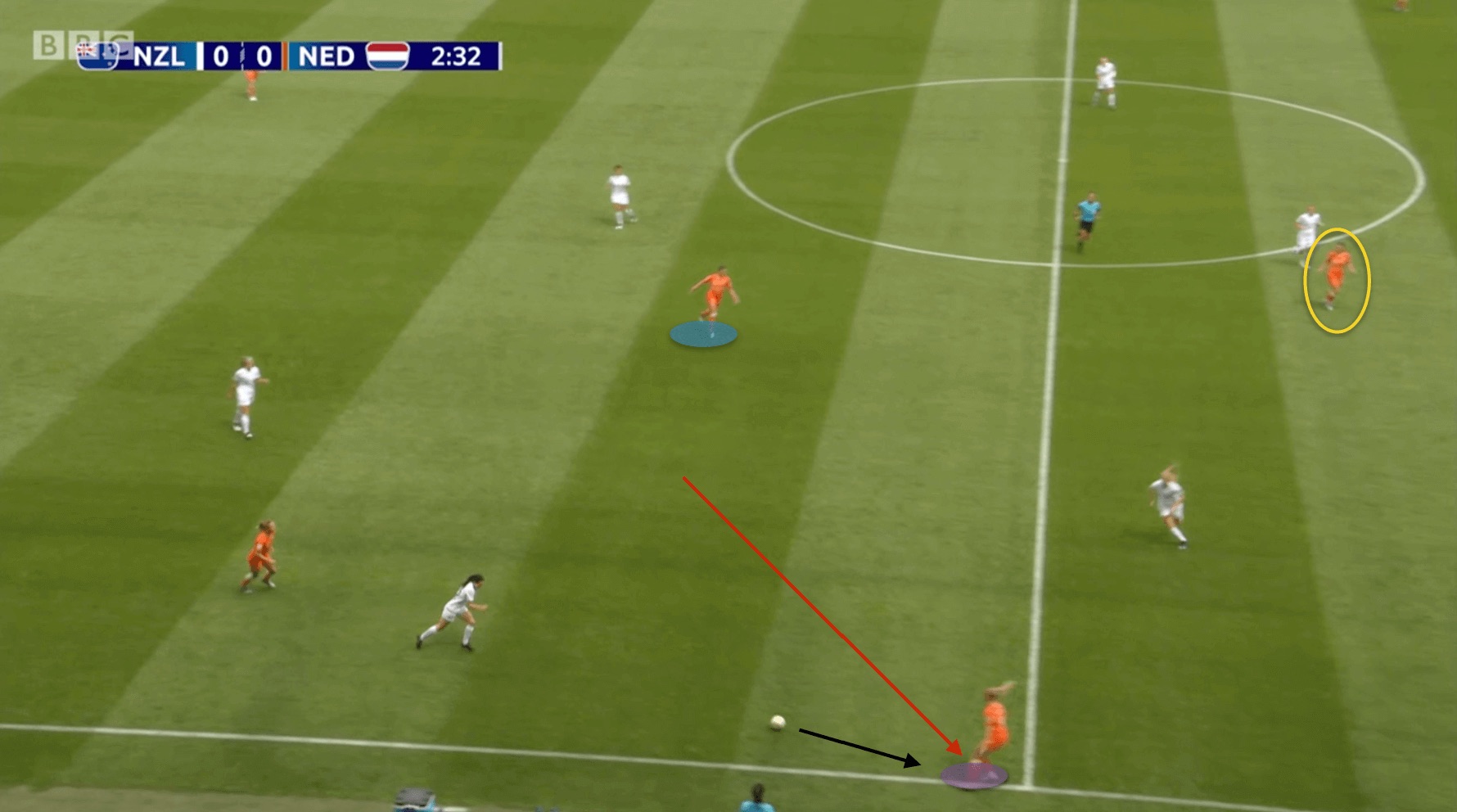 It will be interesting to see if the Dutch system of build-up play will yield any more results than Canada’s attempts. The Canadians lined up in a not dissimilar way, with their formation leaning on being a lopsided 4-2-3-1. This could indicate that the Netherlands may also struggle.

The Indomitable Lionesses have two key features of their defensive structure. First, there is the rigid three centre back structure at the heart of their defence. Manie and Johnson both proved capable in their opening match. They were able to effectively step out of the back line if need be. This was a little risky sometimes, though, and did leave space that could be exploited by the talents of Martens and Van de Donk.

Below, we can see the rigid core of the backline. It is a backline that is also shielded by two central midfielders – Raissa Feudjo and Jeannette Yango. Both midfielders operated very deeply to provide ample protection of the defence, and further congest the middle. This congestion is highlighted by the red covering. 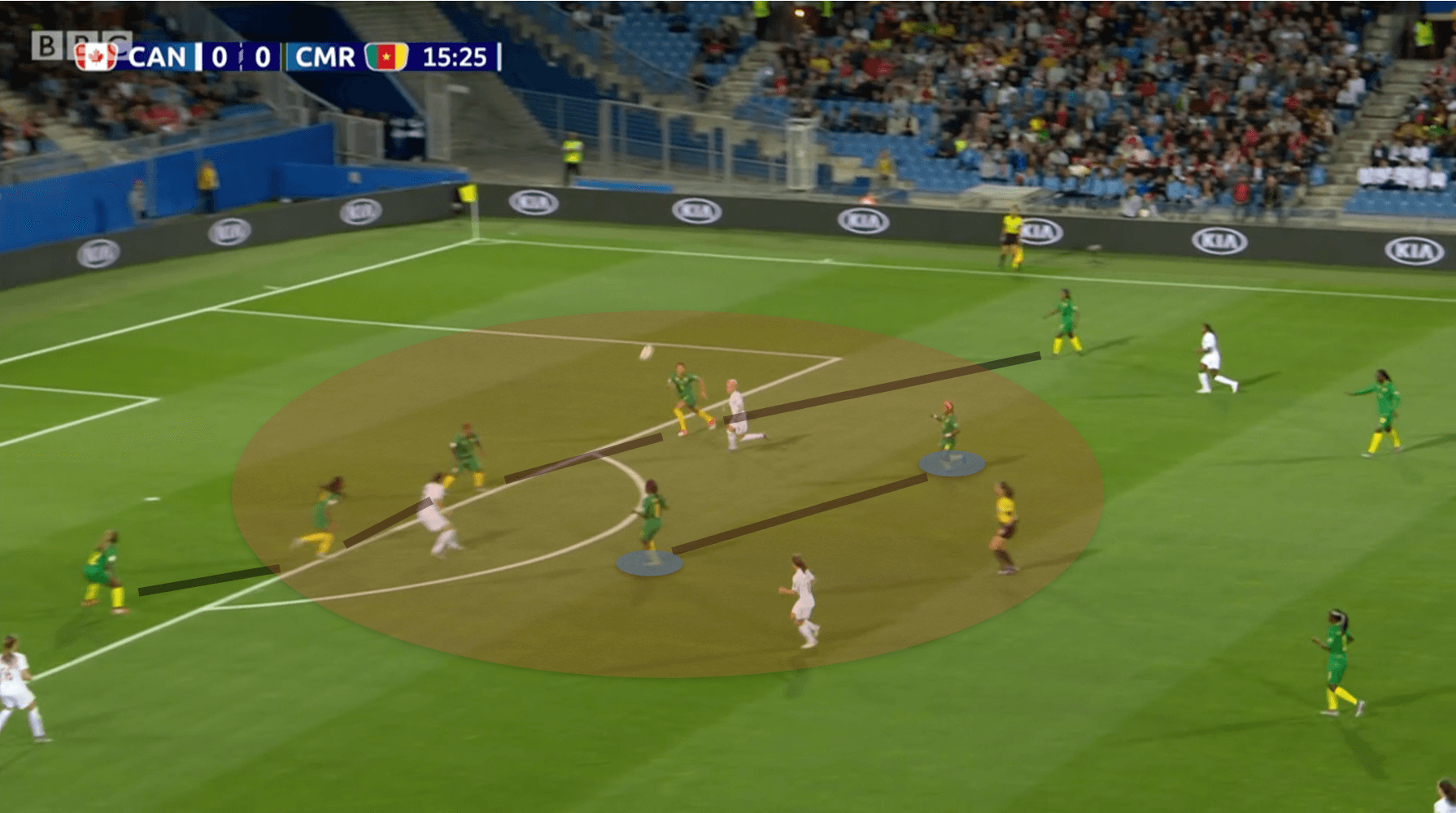 Further forward, the Indomitable Lionesses defend in what appears to be a kind of 2-3 formation. As discussed, the two central midfielders – Feudjo and Yango – sit deep. The two wingers – Onguéné and Ajara Nchout – then push up alongside striker Marlyse Ngo Ndoumbouk. This keeps a compact shape further up the pitch, while also maintaining some intensity in pressing with a three-player front line. 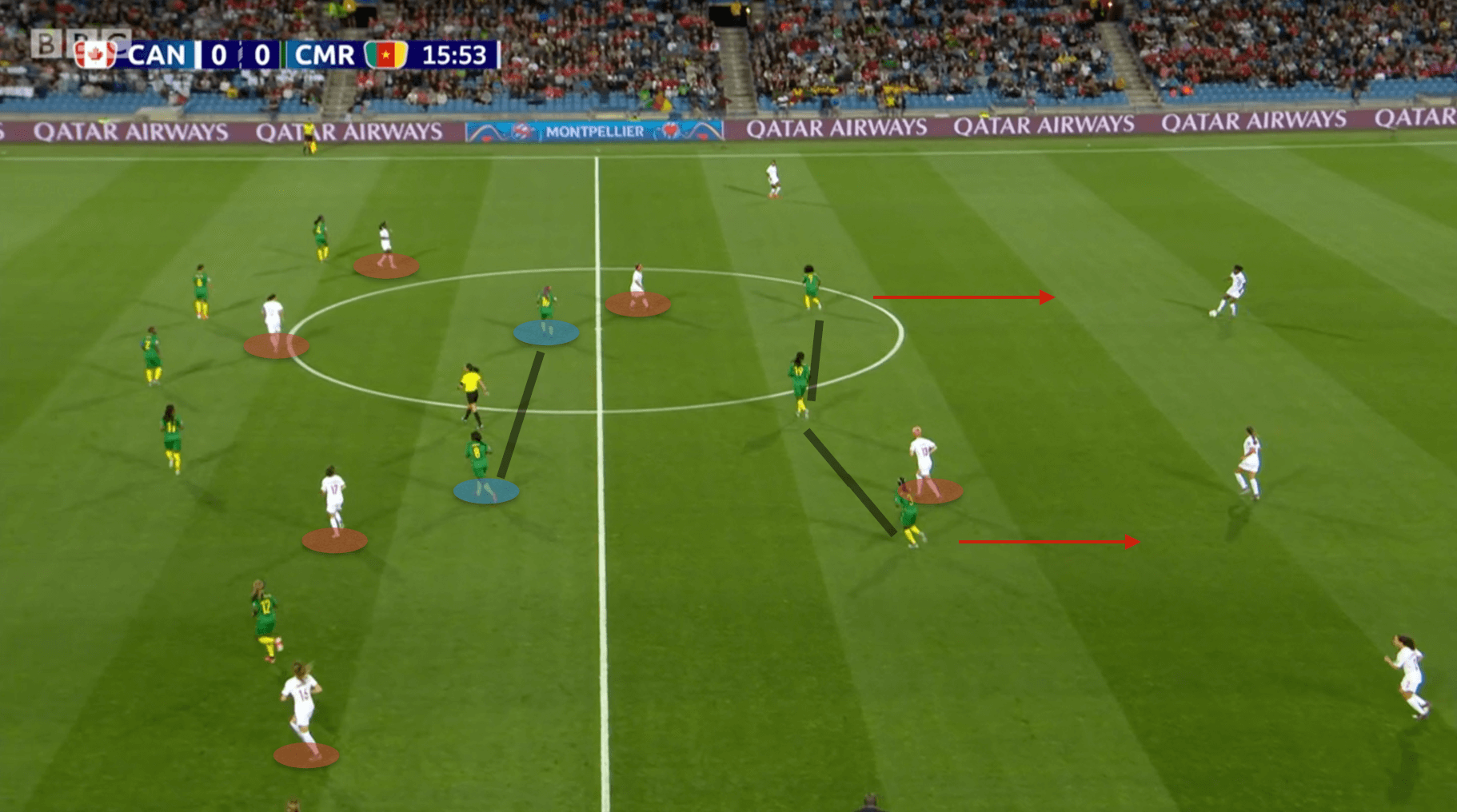 As we can see above, the shape almost becomes a 5-2-3 when out of possession. What this does well is limit options in the middle of the pitch, as we can see by the limited options Canada have down the centre. The Dutch will need to be far more inventive with their movement than the Canadians to break down the Indomitable Lionesses. Their attacking players will need to come deep, but must be careful to not sacrifice all presence in the final third.

Attempts from the Netherlands to play through the middle will be unlikely to yield any positive results. In order to really trouble the Cameroon defence, the Dutch must stretch the play. Ensuring the full-backs have a positive role in this will be key.

As we can see in the image below, the Indomitable Lionesses’ system does have a flaw that can be exploited. While the middle is congested, there is space out on the flanks behind the advanced wingers. Utilising this space with their full-backs will be important for the Dutch. If the Netherlands can create two versus one situations on the Cameroon full-backs, they may be able to have some joy against their defence. 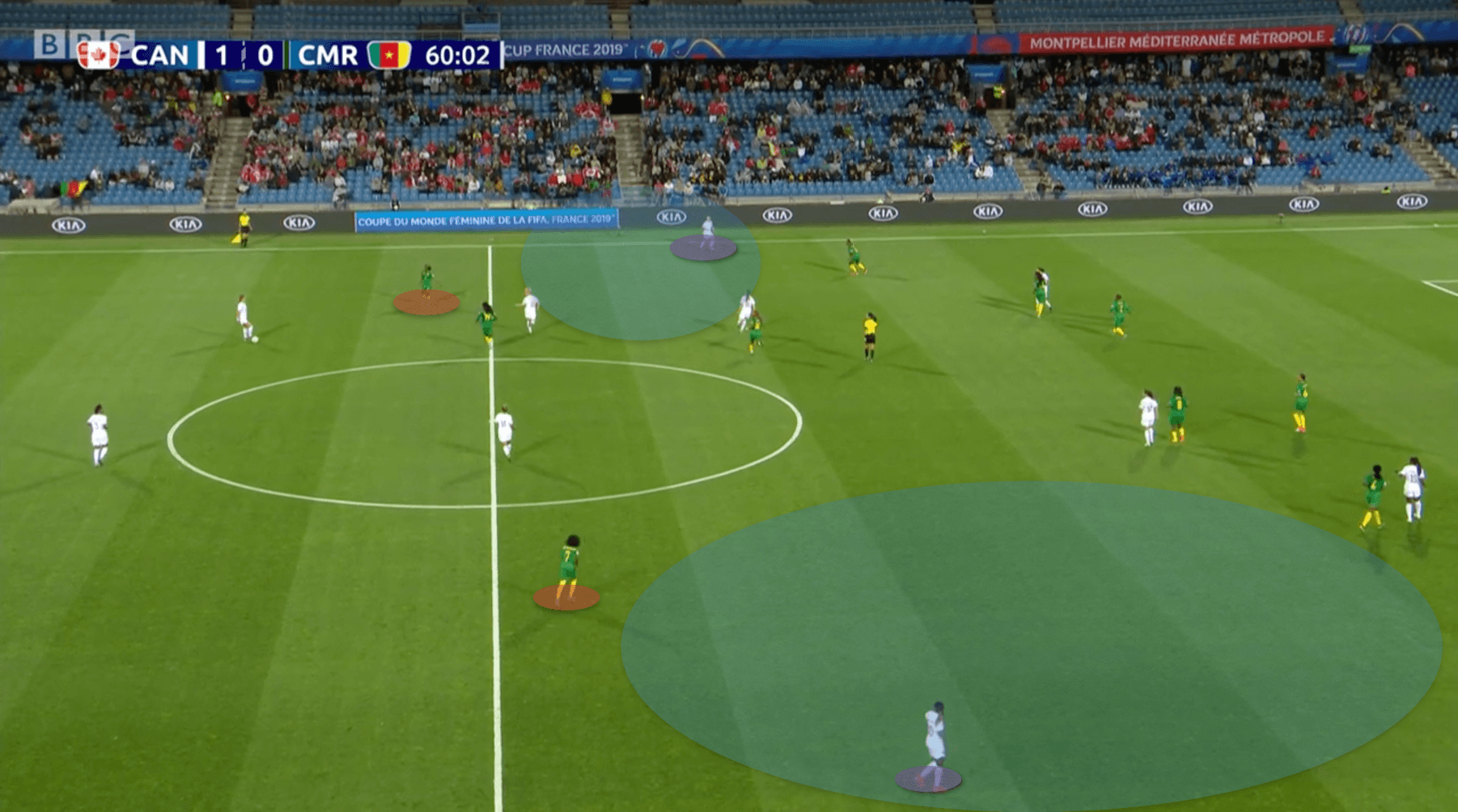 The Netherlands do potentially have full-backs willing to exploit that, as can be exemplified by this smart run from right back Desiree van Lunteren. While Cameroon do have an extra centre back to cover the space, it will still be an effective tactic which could prove vital. The Dutch have the quality to hurt Cameroon in these situations and should use this approach to try and pick their defence apart. 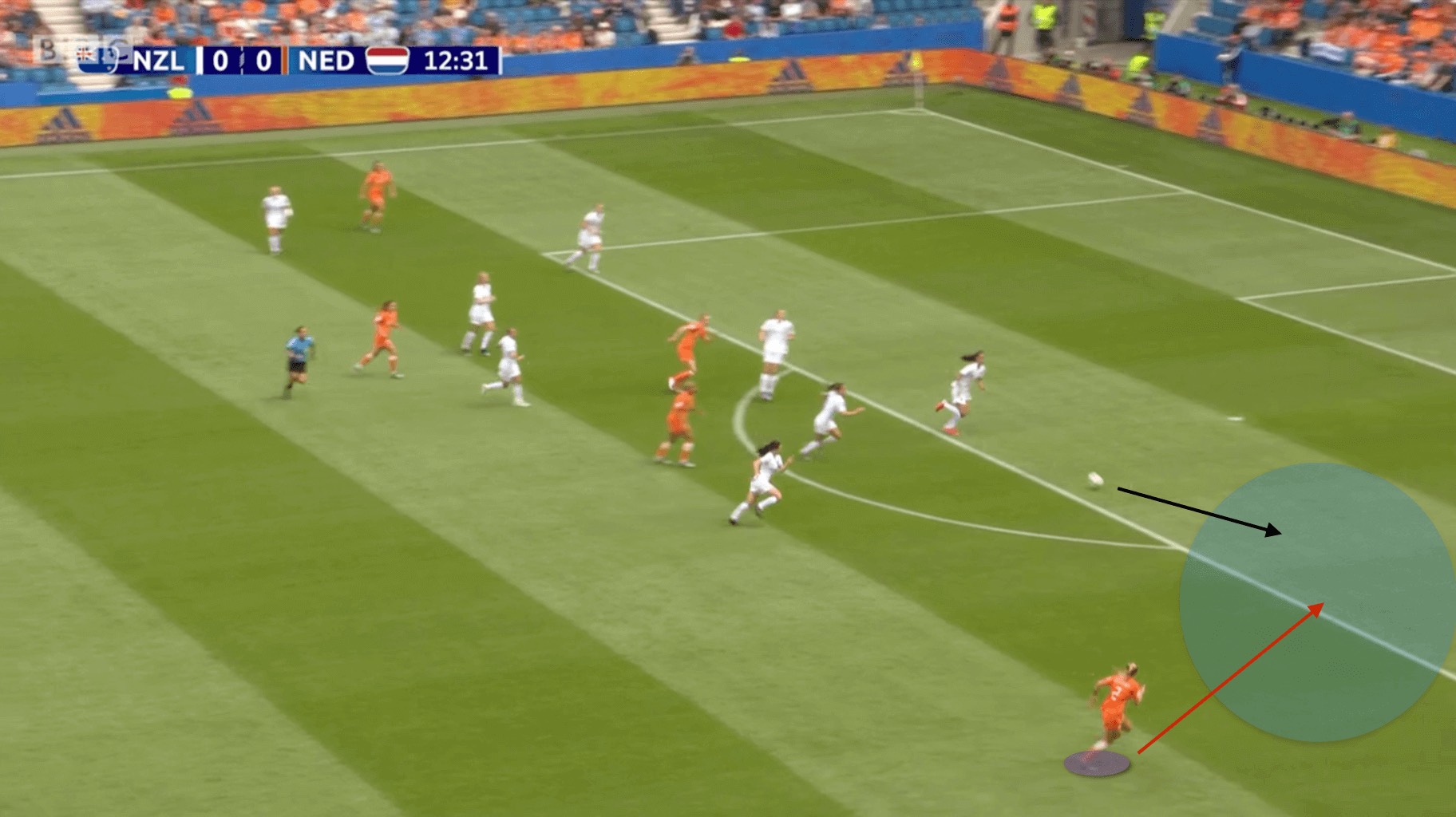 The Netherlands will be clear favourites for this game. It is a match that is likely to mirror both sides’ opening World Cup matches as attack versus defence. While Cameroon may be ranked lower than the Netherlands’ previous opponents, they proved themselves to be incredibly tough adversaries in their opener against Canada.

It will take a strong display from the Dutch in order to break the Indomitable Lionesses’ down. They will need to exploit width in order to effectively stretch the Cameroon defence to find holes in it. It should be an intriguing encounter between these two sides come Saturday afternoon.