Atalanta had another tremendous season under Gian Piero Gasperini and finished third in Serie A. This achievement was rewarded with qualification for the 2019/20 Champions League. Over the last few years, Atalanta have seen their best players leave every summer as bigger clubs have come circling over Bergamo. Now, however, Atalanta look likely to push on by trying to keep the likes of Alejandro Gómez, Duván Zapata and Josip Iličić whilst adding quality to the squad. This can be seen in the purchase of Luis Muriel from Sevilla. This tactical analysis scout report will look at what the Colombian brings to the squad and how he will fit into Gasperini’s tactics.

Luis Muriel is a proper attacker in the sense that he can do everything. He scores a goal from distance, he scores smart shots in the box, he scores magical individual goals and he can create goals for his teammates. Aside from being one of the best finishers in Serie A, Muriel brings a devastating threat on the counter-attack and excellent link-up play. Now, let’s look at what he can do.

Devastating on the break

Muriel has been compared to the brilliant Brazilian striker Ronaldo in the past and it is easy to see why. Just like Ronaldo, Muriel is very powerful, quick, dribbles well and has sublime technique. The below sequence highlights how formidable he can be at his best. In the first image below, Muriel receives a pass in his own half with a defender tightly marking him. Muriel knocks the ball to his left and quickly turns. 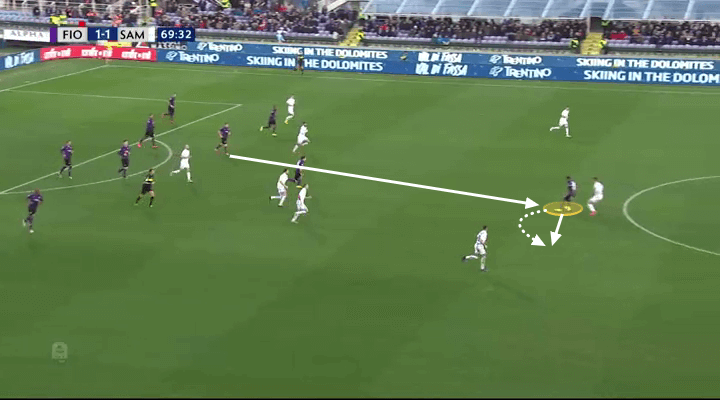 That forces the next defender to step towards him, as seen in the image below. Now, Muriel knocks the ball on one side of the defender and runs around him on the other. 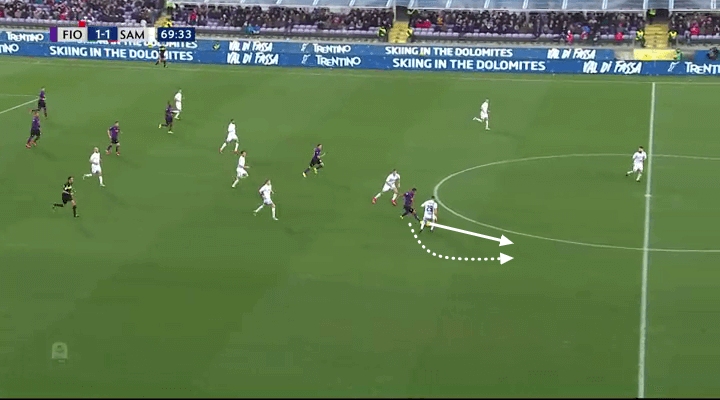 The Colombian striker then runs with the ball all the way to the penalty area where he finishes calmly. This goal epitomises everything about Muriel at his best; creativity, power, pace and technique. 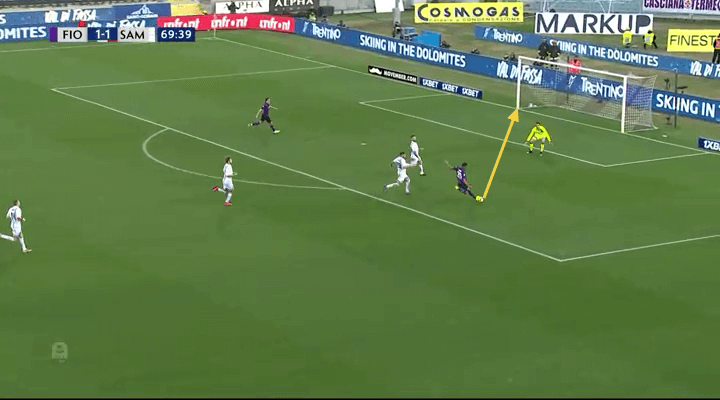 The image below highlights a superb Muriel strike away at Barcelona when playing for Sevilla. Here, Muriel starts slightly off the left and receives a pass into his path as Sevilla counter-attack the Catalans. With his first touch, Muriel bends a stunning, curled effort into the far top corner. 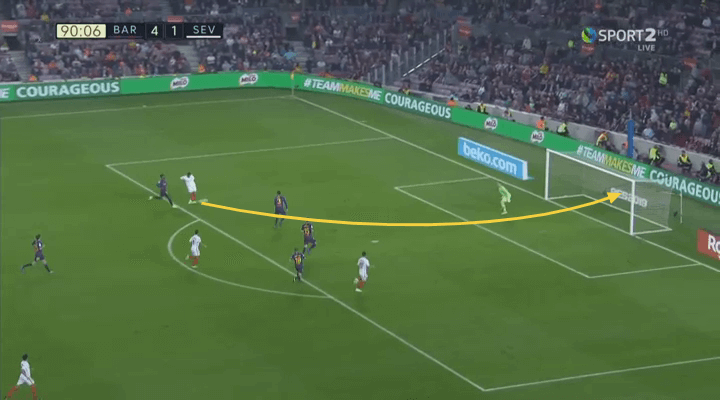 Muriel’s threat on the break is immense, and that will definitely be one of the key assets Atalanta have identified as they will likely not be the dominant team in their first ever Champions League matches. Carrying a counter-attacking threat will be key, and Muriel gives them the best threat you can pose.

Muriel is not only good on the break though as he is equally adept at linking up with his teammates to create chances against organised defences. This is something the likes of Gómez and Iličić already excels at so the addition of Muriel will only make Atalanta more dangerous against packed defences. The image below highlights Muriel’s ability to spot a pass as he attracts two Atalanta defenders towards him before slipping through the pass to set his teammate through on goal. 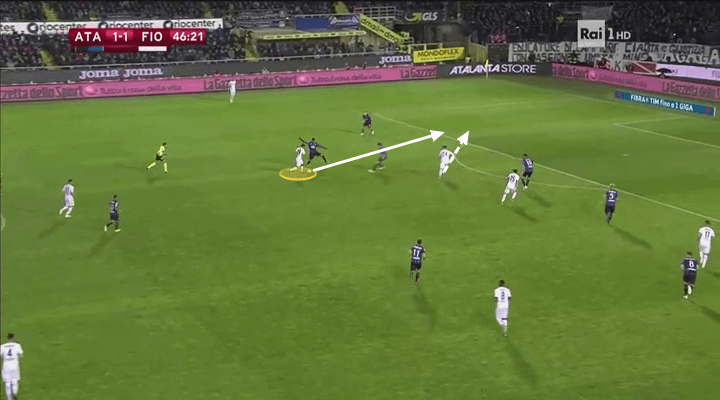 In the image below, Muriel’s creativity is obvious again as he plays a sublime pass through the midfield and defensive lines of Torino to play Giovanni Simeone through. 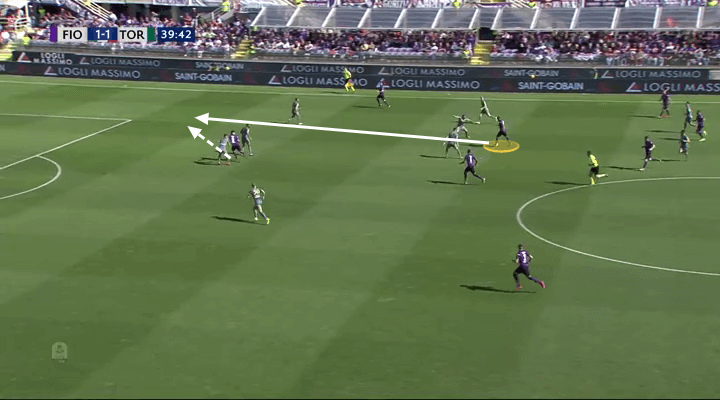 Muriel also likes to drift into wide areas and can cross the ball brilliantly too. In the image below he spots the space behind the ball-far centre-back and finds his teammate. 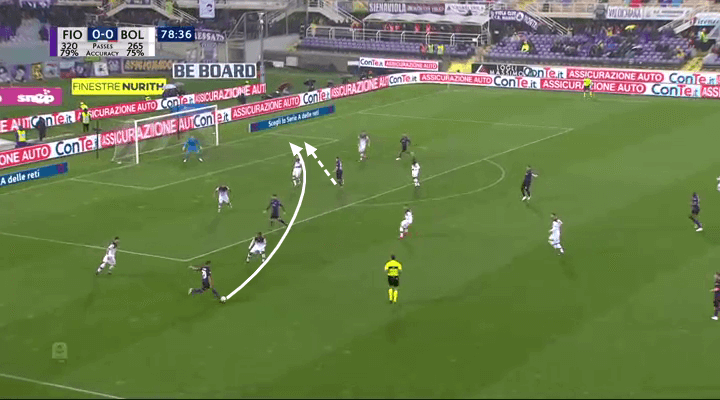 The image below is another example of his crossing ability as his weighted ball in finds Federico Chiesa at the back post. 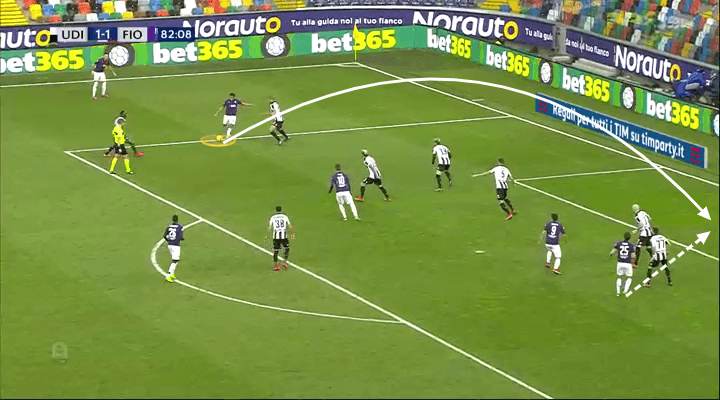 So, as you have now seen, Luis Muriel is not only a devastating forward who can score goals and dribble, he can also create chances for his teammates. What is telling about most of these images is that Muriel creates from the left half of the pitch, because those are the spaces he likes to drift into.

How does he fit into Gasperini’s tactics?

Atalanta have been sublime in the transfer market in recent years and managed to sign quality players cheaply whilst selling their stars for high fees. The Muriel signing is a statement of intent, but perhaps they have seized an opportunity here rather than deeply analysed how Muriel fits into Gasperini’s setup. Stylistically, Muriel ticks all the boxes. He’s very quick, he’s technically superb and can score goals from all areas. He’s also well-suited to the high-tempo game Gasperini deploys, although it remains to be seen how he fits into their pressing game.

The obvious issue one might want to raise is Muriel’s preference to play in the left-sided half-space. This is a preference both Gómez and Zapata share. In Gasperini’s 3-4-2-1/3-4-1-2 tactics, there is no possibility for the three of them to combine in such a way. This is why Iličić, the Slovenian’s undoubted quality aside, has been such a good fit since he thrives playing on the right half of the pitch. If Muriel is expected to replace Iličić on the right, he would play in a role he rarely has before. At Sampdoria, Sevilla and Fiorentina, Muriel has always played slightly to the left. This is similar to how Zapata played last season when often making runs out towards the space between the opposition’s right-back and right-sided centre-back. This can be seen in the image below (Zapata is highlighted with the yellow circle). 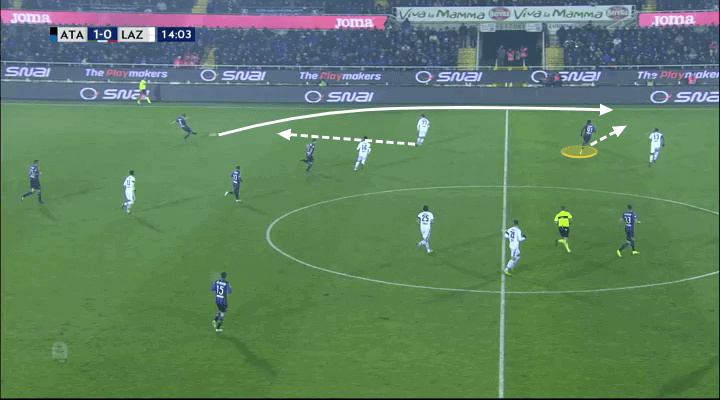 Additionally, Gómez thrives in the left-sided half-space and has been the key to Atalanta’s attacking play for the last three seasons from this position. It’s clear to see why the signing might prove problematic in this regard.

If Iličić was to leave the club, it would make sense for Gasperini to try Muriel and Zapata up front with Gómez slightly withdrawn as a number 10. Muriel or Zapata might be fantastic playing off the right, but we don’t know that as of yet. That is why the signing carries with it a sense of uncertainty. The best bet would probably be to have Zapata playing slightly to the right since Muriel’s crosses from the left would be extremely dangerous for teams if you have Zapata attacking them.

Luis Muriel is a fantastic player, Gian Piero Gasperini is an excellent coach and Giovanni Sartori is one of the best sporting directors in Europe. The signing might prove inspired and Muriel might thrive alongside the likes of Iličić, Gómez and Zapata. Still, questions remain regarding how the Colombian’s positional preference will match those of Gómez and Zapata. If Gasperini finds a way to incorporate Muriel into his tactics well then Serie A’s top scoring team will only be more dangerous, but if not, as this analysis has shown, Muriel might prove a needless signing for Atalanta.