Real Madrid spent astonishing £272.2 million for their new players during the last weeks. Besides the names of Eden Hazard, Luka Jovic, Éder Militão and Rodrygo, they also signed the 24-years-old left-back Ferland Mendy from Lyon. The Los Blancos paid £43.2 million to get the Frenchman.

Considering this, he is the second most expensive left-back in the history of football. Only the same-named Benjamin Mendy was more expensive since Manchester City transferred £51.75 million to Monaco two years ago.

This tactical analysis will show Mendy’s career up to now and will analyse his style of play.

Born in France, Mendy is of Senegalese descent. When he was 14, he developed arthritis and spent a combined nine months in hospitals. He even was in a wheelchair and was told that he could probably never play football again. Before that, he played for the youth teams of Paris Saint-Germain. However, the young Frenchman learned how to walk again and fought his way back.

At the age of 17, he was back at his usual level, but PSG hesitated with their decision if they would keep Mendy. In light of this, the left-back decided to leave the club and joined Le Havre. He debuted for the first team in 2015 at the age of 19. After combined 50 appearances for the club, he moved to Lyon in 2017 and played in the last two years 79 times for them.

Furthermore, he debuted for the French national team on the 20 November 2018 and made since then two appearances. Due to his strong performances in the Ligue 1 and the Champions League, several top clubs took notice of him and wanted to sign him. Real Madrid were among these clubs and finally signed the left-back this summer.

Positioning and impact on Lyon’s game

Nowadays, you expect from full-backs that they are offensive and support their team when it comes to attacking. Mendy is one of these modern full-backs who plays exactly like this. He tries to support his teammates whenever his team is in possession. As you can see in his heatmap, the Frenchman is really offensive but tries to don’t neglect his defensive duties.

However, some more aspects get visible when you look at his heatmap. He doesn’t just cover the flanks but also a bit of the half-spaces. As this analysis will show later on, even though he positions wide when his team is in possession, he likes to dribble diagonally inside the pitch. As you can see in the image below, the centre-back is on the ball and Mendy positions wide to provide a passing option.

Even though Lyon had last season some incredible players like Tanguy Ndombélé, Houssem Aouar, Nabil Fekir and Memphis Depay, Mendy was very important for his team’s tactics. He had on average 79.07 actions per game what is really impressive for a full-back. In addition, he played on average 50.1 passes per 90 minutes what shows that he really was a central player in Lyon’s squad. Furthermore, he made 0.1 assists per game. Even though this value isn’t as good as those of the previous two statistics, later on, we will see that his crosses and passes are much better than this statistic would tell.

What makes him so strong?

Thierry Goudet, one of his coaches at Le Havre, once said the following about Mendy:

“An extraordinary offensive potential, exceptional technique and defensive qualities coupled with his pace – in short, he has the full range of a modern full-back.”

As Goudet mentioned, Mendy doesn’t have one big strength that makes him special. Instead, he has several abilities, as this scout report will show later on, as well as his incredible pace. In the shots below, his opponent receives the ball and seems to come into a one-on-one situation AGAINST Lyon’s goalkeeper. However, the left-back uses his incredible speed to make up some ground and is able to win back the ball. 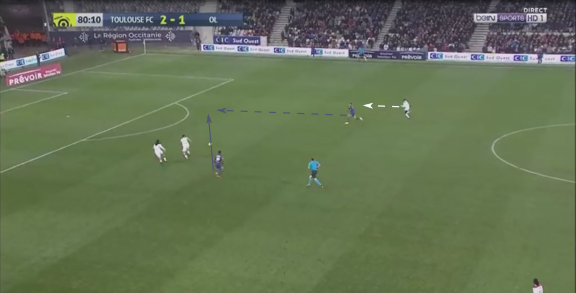 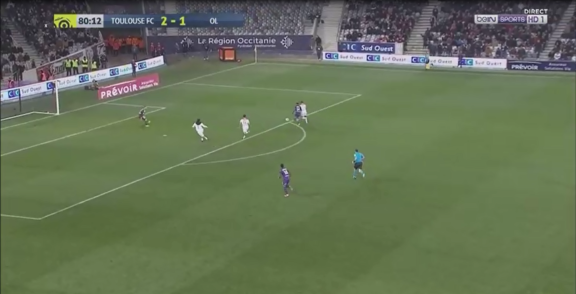 But on the other hand, of course, he also uses his pace when it comes to attacking situations. Whenever one of his teammates is on the ball in the left half-space or wing, he tries to get behind the last line of the opponent’s defence.

The 24-years-old full-back loves to have the ball at his feet. He always tries to support his teammates to get on the ball. As soon as he’s in possession he likes to start a dribble. On average he dribbles 4.98 times per game with a success rate of 77.9%. As already explained, Mendy isn’t a classic left-back who just dribbles vertically on the wing. He also often cuts inside when he’s on the ball.

Of course, he also often makes overlapping runs which are usual for full-backs. In these situations, he can use his pace to get himself into a good crossing position. Even though this sort of run is done by almost every full-back in the modern game, it is still incredibly hard to defend against. And it’s getting even harder when it is executed by such a fast player like the Frenchman.

And as soon as he gets in a good position, he tries to deliver a cross. Mendy crosses on average 2.96 times per game. However, he hasn’t got a typical style of crosses. He always tries to keep his head up and look for the teammate in the best position. In the images below, the players are always positioned in completely different areas. The Frenchman sees that they’re in the best position and finds them with great crosses due to his vision and technique. 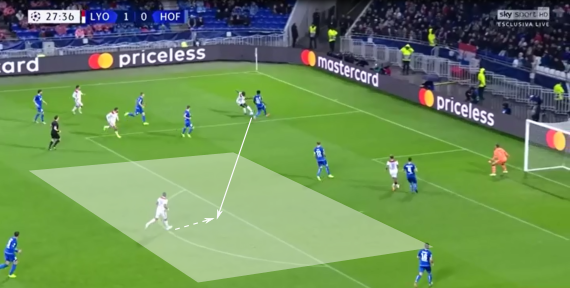 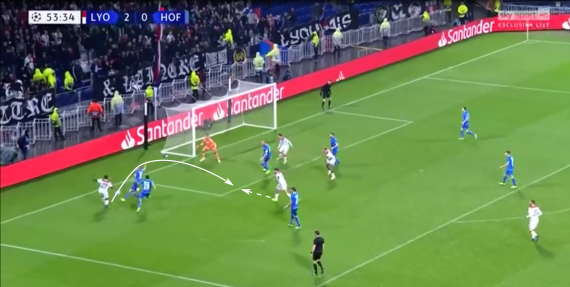 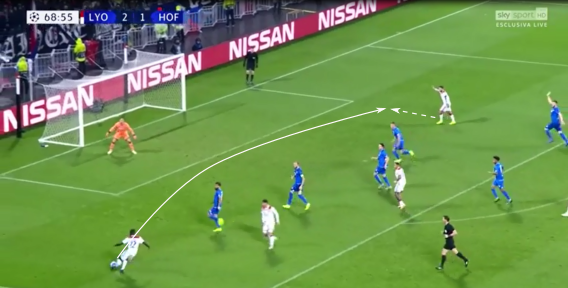 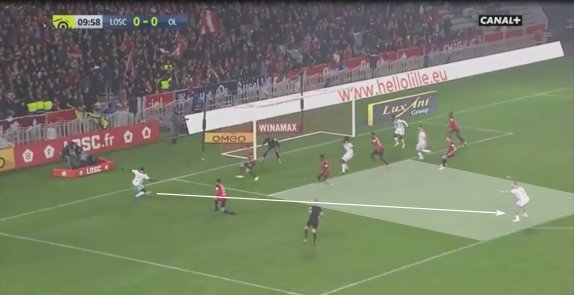 Although you expect from modern full-backs that they support their teammates during attacks, they’re still defenders. So, they shouldn’t neglect their defensive duties due to their offensive role. Mendy has got the stamina support his teammates when it comes to attacking as well when it comes to defending. He once more uses his pace and strength to win the duels against his opponents.

However, pace and strength aren’t always enough to defend against good opponents. But Mendy also has got the defensive abilities to stop players with a great technique. He proved that in the example below against one of the players with the best technique of today: David Silva. Silva passes the ball to Sergio Agüero and immediately starts a deep run. He receives a through pass from the Argentinian and Mendy is a little bit behind. He uses his pace to come closer and is able to deliver a great tackle and avoid a goalscoring chance. 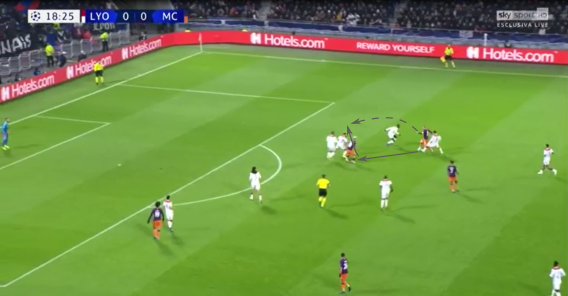 This analysis showed that the Frenchman is a great signing for Real Madrid. The young left-back has got beside his physical quality a lot of other abilities and doesn’t seem to have any great weakness. It’s truly incredible that the doctors told him 10 years ago that there’s a chance that he won’t be able to return onto the football pitch and now he joined one of the greatest clubs in the history of football and is the second most expensive left-back of all time.

It will be interesting to watch who Zinédine Zidane will prefer in the left-back position. If none of the following players will leave the club, he has got three left-backs in his squad: Mendy, Marcelo and Theo Hernández. However, Zidane will be a fan of Mendy, otherwise, Real Madrid wouldn’t have bought him.