Many teams all across the MLS were desperate for three points last weekend. With only a few games left, the difference between a loss and a draw could be the difference between making playoffs or an uncomfortably long offseason. Because Chicago, Montreal and Orlando all dropped points on Saturday, DC United had already clinched their spot before their match kicked off. The onus was on Seattle Sounders to guarantee a spot for themselves, but DC United weren’t going to make it easy for them.

With six of the seven playoff spots still available in the West, Seattle Sounders‘ second-place position meant nothing heading into the game. And after 90 minutes against DC United, their playoff spot is still up in the air. Ben Olsen’s tactics were too much for Seattle to overcome as Brian Schmetzer’s team lost 2-0 at Audi Field. Find out how the match was won by DC United in this tactical analysis.

Ben Olsen made no changes to his starting XI that managed to win an important game against the Portland Timbers a week prior. In attack, DC maintained their 4-2-3-1 position but shifted into a 4-4-2 or 4-3-3 when defending. Their defensive shape changed depending on whether they were committing two or three plays to press.

Brian Schmetzer also lined up in a 4-2-3-1. A red card in their last match against FC Dallas meant that Seattle was without centre-back Xavier Arreaga. This prompted Gustav Svensson to fill the void in the backline with Cristian Roldán shifting back into the holding midfield role in place of Svensson. Harry Shipp took Roldán’s place in the attacking midfield role, while Jordan Morris returned to the starting lineup ahead of Joevin Jones. Brad Smith was the only other introduction to Schmetzer’s starting lineup, replacing Nouhou Tolo at left-back. 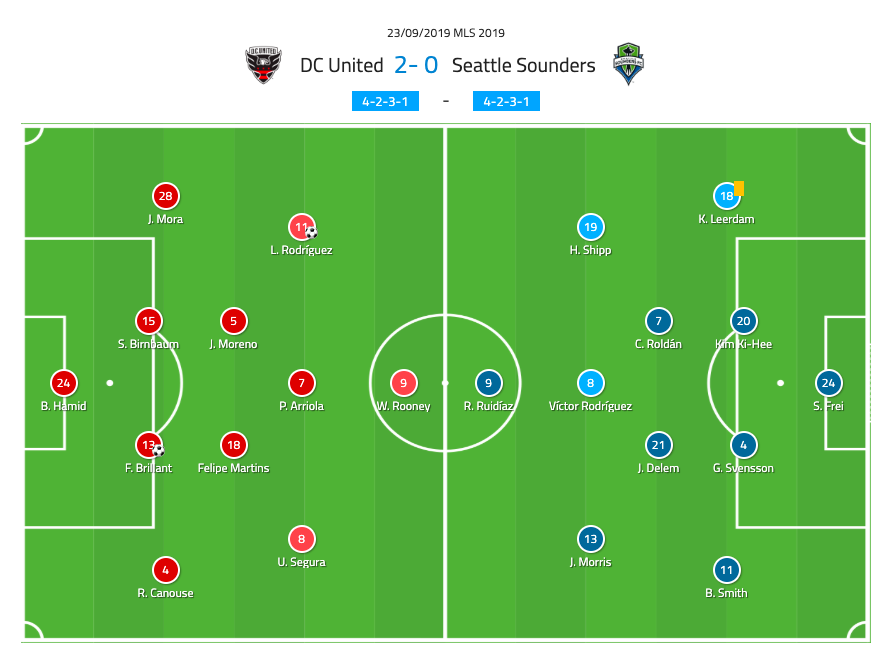 In the first five seconds of the match, DC United managed to force a turnover with their high press. The team managed to continuously push back Seattle Sounders, forcing them to play long balls up the field. DC United managed to win the second balls in the midfield and start their attack from advanced areas of the park.

DC’s pressing style was high and intense. The objective was to force the ball back to Sounder’s goalkeeper Stefan Frei and restrict all short passing options. This would usually involve one of DC United’s attacking midfielders, or Wayne Rooney, sprinting at the ball carrier. The high-intensity sprint severely limited the time the ball carrier had, while the supporting players prevented other passes.

The following image showcases how DC United were effective at limiting the passing options of the deep-lying ball carrier. Paul Arriola presses Sounders’ centre-back Gustav Svensson, forcing the Swedish defender to play a ball back to his goalkeeper. As the ball travels to Frei, Arriola continues his run towards the Swiss keeper. But as we can see from the image below, Arriola’s run is curved. He does this to prevent any pass back to Svensson.

The angle of Arriola’s run also limits Frei to one side of the field. Arriola prevents a passing option back to Svensson while sprinting at the keeper. This makes it easy for his teammates Wayne Rooney and Júnior Moreno to cover Cristian Roldán and Kim Kee-hee in a man-oriented press. In the clip, you can actually see Rooney point towards Roldán and telling Moreno to press him. We can see the result of their man-oriented press below.

In this instance, Frei hit the ball long into the midfield, where DC United regained possession. DC progressed the ball up the field quickly to Arriola, who was able to force a brilliant save out of the Frei.

The press, on many occasions, forced Seattle back to their goalkeeper, where DC United would limit passing options to one side of the field. But while their press forced many turnovers, it also had its flaws.

On a few occasions, one of DC United’s forwards pressed the ball carrier but had no support from teammates. This resulted in an easy escape for Seattle, who could bypass the pressing player with ease. We can see an example of this in the image below when Wayne Rooney pressed Gustav Svensson.

Lucas Rodríguez doesn’t continue his run forward, allowing Svensson to play an easy pass into his partner, Kee-hee. We can see above how most of the short passing options are marked for Seattle, meaning the only outlet is Kee-hee or Frei. Instead of playing all the way back to his keeper, Svensson plays a lateral ball to Kee-hee.

But while DC United’s press helped them effectively win the ball back in the midfield, there were times where it put them under pressure. If possession was retained by Seattle after being forced to play long, it allowed them to quickly attack DC United on the counter. The press, of course, stretched Seattle Sounders, but it also stretched DC United as well.

That meant whenever Seattle managed with the ball in the midfield after DC United’s press forced a long ball, it provided them with an opportunity break. Brad Smith managed to rattle a shot off the crossbar in the seventh minute after being sent on a breakaway after Seattle beat DC’s press.

As well as effectively pressing their opponents, DC United were able to break down Seattle Sounders by limiting their touches during the buildup. In many instances, DC players circulated the ball with quick one-touch passes. When doing this, it was rare for DC United to bypass players, keeping their passes short. By limiting their touches, DC were able to quickly switch the point of attack as well as move Seattle defenders out of position.

We can see DC create a goal-scoring opportunity in the 33rd minute from these quick passes. As Ulises Segura dribbles into the middle of the field from the right, he drags Seattle’s defenders with him. He also pulls Seattle centre-back Gustav Svensson out of position to step to him. As he makes his way into the middle of the field, Segura passes the ball to a central Wayne Rooney.

As the pass comes into Rooney, the Seattle players continue their shift. As this happens, Júnior Moreno makes a run into the space that was created from Segura’s dribble and pass. Rooney has the vision and quality to play a first time pass into the space, allowing Moreno to run onto the pass, as we can see in the image below.

The speed of the buildup made it very difficult for Seattle’s defenders to effectively track the off-the-ball movements of DC United’s players. The quick one-touch passes meant that the ball was constantly moving direction, forcing Seattle to be constantly adjusting their position to the ball. While DC United’s first goal didn’t come directly after one of these quick one-touch passes, there were a few in the buildup to the attack.

These quick passes didn’t just happen centrally. DC United also made use of quick passes to possess the ball in wide areas. In the following image we can see how DC United created passing triangles on the flanks to facilitate their quick passes.

Off-the-ball movement was paramount to the success of these quick movements, as the receiver and the ball usually entered the space simultaneously. On rare occasions, we can see how a lapse in concentration resulted in a turnover. While attempting to circulate the ball quickly down the right side of the field, in a similar passing triangle to that of the image above, DC United’s Russell Canouse fails to move into space further up the field. As Felipe Martins passes the ball into Segura, Canouse has an opportunity to make a run into the empty space in an advanced position. The lack of movement and anticipation in this move resulted in a loss of possession, though.

The speed of DC United’s play meant that one false move could result in a turnover. In the above example, Canouse fails to make a run forward, and Sergua plays a first-time pass into the space, which resulted in a throw-in for Seattle Sounders. It is clear that the speed of DC’s buildup caused problems for Seattle, but it also forced DC United’s players to be constantly paying attention and moving into the required spaces.

Seattle Sounders couldn’t find their way back into this game but they looked the most promising when attacking down the left. By targetting DC right-back, Russell Canouse, Seattle looked to overload the left side of the field and whip dangerous balls into the box. With Jordan Morris on the left, there was always a chance Seattle could have nicked a goal. Morris’ influence has been highlighted in a previous analysis when Seattle Sounders came back against Portland Timbers.

While the opposition was different, there seemed to be similarities in Seattle’s tactics. Jordan Morris has the ability to find space and run at defenders. With DC United’s low block helping them achieve one of the best defensive records in the MLS, it was always going to take something special to penetrate their lines and beat Bill Hamid.

In the following image, we can see Jordan Morris feed a ball into the space for an overlapping Brad Smith. Given Morris’ ability to dribble at defenders, the overload by Seattle forced DC United to commit defenders to wide areas, and this left space in the middle for the central and far side attacking players to attack the deliveries.

We can see an example of Seattle overloading the right side early into the first minutes of the second half. As this was happening, Víctor Rodríguez could infiltrate the space left in DC’s defence. In the following passage of play, Seattle earned themself a shot on target, forcing a save out of Bill Hamid.

In the first half, a ball from Smith made its way past all central players and into the path of Kelvin Leerdam who was making a late run on the far side of the field. Leerdam took a dangerous first-time shot that was deflected out for a corner. Brad Smith’s breakaway chance that was previously mentioned in this analysis also came from a break down the left side fo the field.

Unfortunately for Seattle Sounders, their finishing was not up to par. The Sounders had a 1.35 xG in this match with nothing to show for it. Had Brad Smith scored in the seventh minute, the game could have been much different. Seattle’s inability to be clinical with their chances will be a regret for Brian Schmetzer.

Despite already earning a spot in this year’s playoffs, DC United went into this match with every intention of winning. The loss means that LAFC are still the only team from the West to secure postseason football.

Seattle Sounders’ next match is against San Jose. Given the Sounders’ poor away form, Brian Schmetzer will be asking his team to dig deep against a team who are fighting for a playoff place of their own. A loss there would be detrimental to the Sounders, whose only hope would be against Minnesota United, who currently sit right below them in the West.

DC United will face New York Red Bulls next week. With both teams already guaranteed a playoff spot, it will just be a case of trying to earn the highest seed possible. After a trip to New York, DC return to Audi Field where they host league bottom-feeders FC Cincinnati.