On the 23rd of July last year, we published an analysis of a young player who was starting to make significant waves in football. That player was the young Norwegian forward Erling Braut Haland. At the time of writing the forward player was still playing his football with his boyhood club Molde, in his native Norway.

We ended the article by stating our hope that Haland would make a smart move when he left Molde as the giants of European football were circling and that it is all too easy for a young player to have his head turned. Thankfully we need not have been concerned. The young forward player did leave Norway but his move was to Red Bull Salzburg in the Austrian Bundesliga. In pure qualitative terms, you could argue that there is not much difference between the Norwegian Eliteserien and the Austrian Bundesliga but in terms of clubs, Red Bull Salzburg are on a whole other level.

Renowned for identifying, recruiting and developing young players Salzburg is the perfect platform for a player like Haland. With that said, however, there are already rumblings that the Norwegian may not be at the club for long with his performances so far this season only serving to attract more potential suitors.

Given the rate of development that we have seen from Haland over the last 15 months, we felt as though the time was right to write a fresh analysis of his game. In this tactical analysis, we will discuss the individual components that make Haland a special talent.

Our scout report will analyse Haland from the tactical perspective, and first of all, it’s worth looking into his season so far from a statistical perspective, especially because those statistics are so startling. To date, at club level, he has played 713 first-team minutes over the course of 9 matches. In that time he has already scored 14 times and assisted 4 more. That gives a total of 1.77 goals and 0.5 assists per 90 minutes.

The other underlying statistics that are notable for a forward player are equally impressive. The youngster has so far registered 4.8 shots at goal per 90, 4.92 dribbles per 90 and 2.15 ball recoveries in the opposition half per 90. 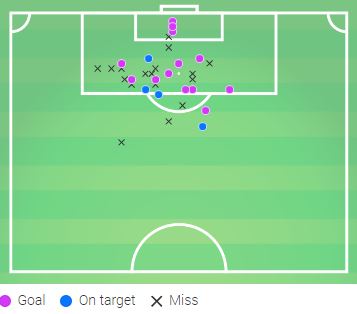 The shot map for the young forward so far this season also paints an interesting picture. He is adept at shooting from all areas of the final third but his shot selection is largely limited,  with one or two exceptions, to the 18-yard-box. He takes shots from positions that will yield a relatively high xG.

In short, the 19-year-old Norwegian international is something of a statistical marvel.

The first thing that strikes you when you see Erling Haland play is his frame. He stands 6 ft. 4 tall with a broad frame and long limbs- it is frightening to think that he is likely to add muscle to that frame over the next two to three years. When strikers of that physical profile are developed there is a tendency for them to become accustomed to receiving the ball into his feet or body from direct passes as their teammates take advantage of their ability to hold up the ball. How often have we seen it? A team plays a tall, strong forward and the ball is continuously played in a direct fashion to them in order to access the final third? 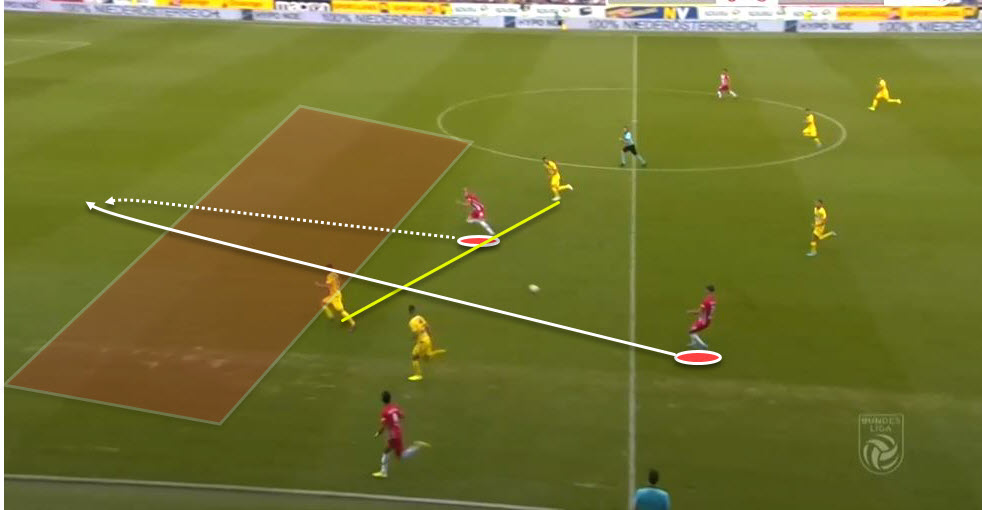 The Norwegian forward excels at finding pockets of space in between the opposition defensive players. He constantly pulls off the shoulders of the central defenders in order to occupy their blindside or drift into channels that will allow his teammates to play him through. We see this above as Haland has occupied space between two opposition defenders. He has the pace to get on the end of the through ball before the defenders can close him down. From that point, he is very difficult to stop as he has the physical capacity to hold off chasing defenders and break into the penalty area. 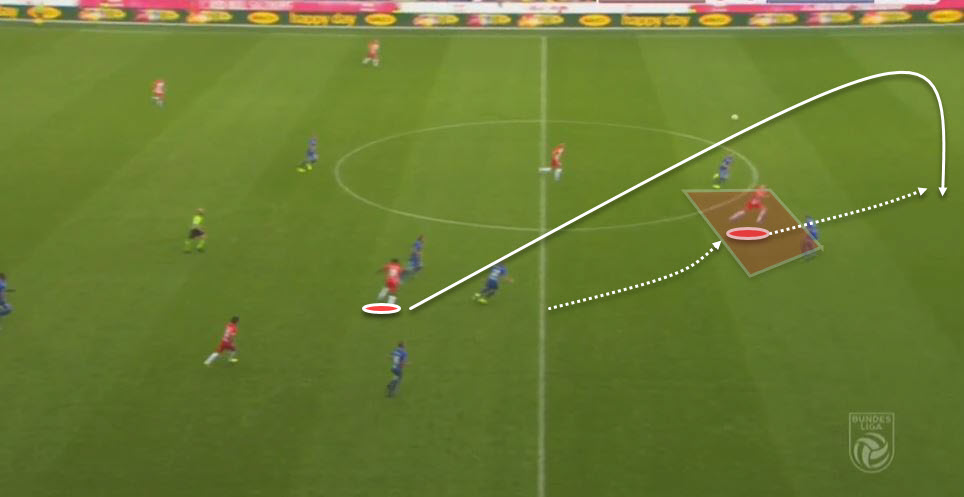 Haland also displays an excellent reading of the play in moments of quick transition. The image above shows a direct pass that had been flicked on behind the opposition defence by his strike partner. This form of chance is slightly harder for a young striker as it is not the result of a pre-planned pattern of play that has been worked on at the training ground. Instead, we can see that the positioning and movement in order to find and occupy space is instinctive.

Even in these situations though Haland has drifted into a pocket of space between two defensive players. As the ball loops forward and drops into space behind the defensive line he is the quickest to react and as before, as soon as he is ahead of the defenders, he is incredibly difficult to stop.

These movements create the opportunities on goal in the penalty area for Haland but he still has to have the composure to finish. He has this in abundance displaying the ability to score all types of goals. Left-foot, right-foot, headers, goals from counters or from crosses. Across the goalkeeper or into the near post. Rarely have we seen a young forward with the sheer range of attacking tools that Haland has at his disposal.

It is easy to get lost in the goals scored by Haland, 1.77 goals per 90 – and let’s not forget that he scored an incredible 9 goals in one match in the U20 World Cup for Norway against Honduras. We should not, however, lose sight of the fact that he is also a creative force capable of drawing opposition players into him before playing through passes to teammates.

For his club side, we have seen Marsch prefer a 4-2-2-2 shape so far this season with a brief moment using 3-5-2. In either scenario though there are two forward players who play off of one another to combine and create goalscoring opportunities. As the hype around Haland continues to increase we will see more and more teams trying to double him up and close him down in the final third. This will, in turn, create spaces for teammates that Haland can help to exploit. 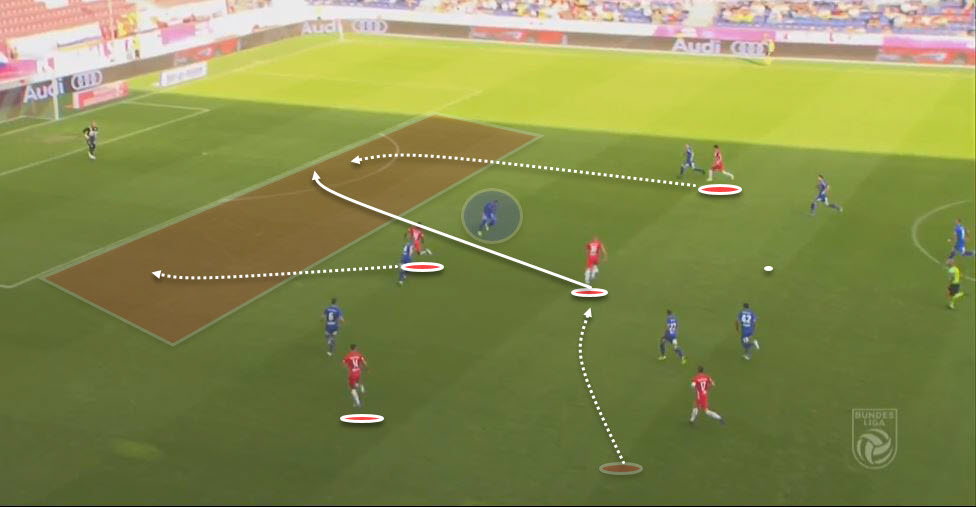 We see this in action above. Haland, having picked up possession of the ball out on the left-hand side having driven inside. This movement from the Norwegian is the trigger for vertical movements from other RB Salzburg players. The Austrian side plays an extremely vertical style with players always making forward runs to stretch the opposition defence and threaten the space in behind the defence. As the Norwegian cuts across, the closest defender is isolated and pinned. As the far side player makes his run Haland simply slips the through ball past the defence to create a goal. 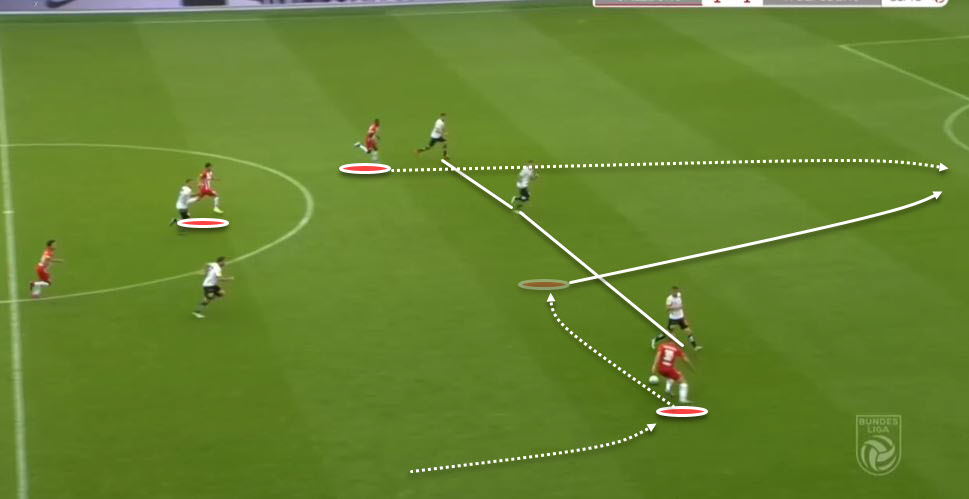 We see a similar situation above but this time Haland is moving forward in a period of quick transition. RB Salzburg are superb when they attack teams before their defensive block can be set. This time Haland is driving forward on the right-hand side and he is isolated against a single defensive player. We have already seen in the statistical section that he is a strong dribbler of the ball and we see that here. With the defensive player having shifted over to the wide space, Haland attacks him on the inside and as soon as he finds space, he creates the through ball for the running forward on the far side. Another goalscoring chance created for his teammate.

So far we have touched upon the movement and creativity displayed by Haland so far this season for RB Salzburg. These would be less effective if they were not combined with an awareness that is unusual for a player so young. We see Haland drift into pockets of space as we have seen above but we also see him read the opposition and the pattern of play before making decisive movements that allow his teammates to progress the ball forward. 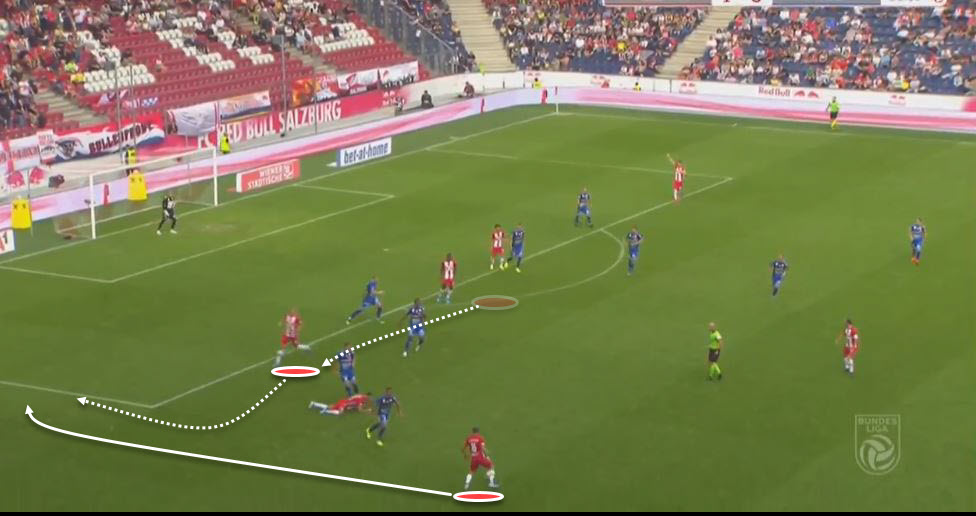 In the example above we see the attacking move shift into the second phase as the defensive side have cleared the ball. The player for RB Salzburg has the ball wide and it looks as though he will simply look to lift the ball back into the penalty area. Haland reads this and makes a quick and decisive movement from the centre to the outside into space. This allows the ball to be played down the outside and the Norwegian forward is able to break into the penalty area to create a chance for his side. 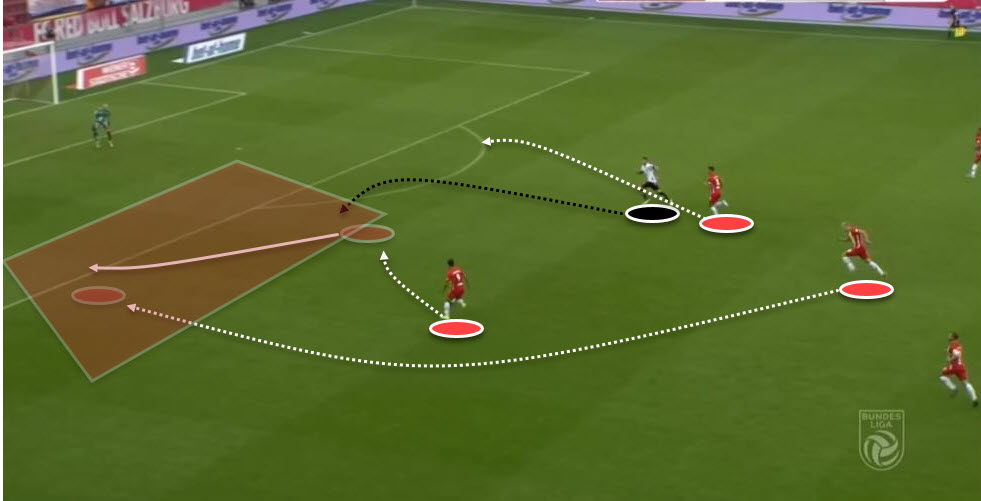 This time we see the pace, power and commitment from Haland to support the attacking movement and score a goal for his side. The forward had started the attacking play by winning the ball back in the midfield before playing it straight through for an attacking teammate to move in on goal. The defending team are so out of position that there is only one defensive player against for RB Salzburg attackers. It would be easy in this position for Haland to hand back and not put in the effort required to catch up with play. Instead, as the defender gets back and covers one potential pass while he engages the ball, we see Haland run around the outside of the ball carrier for an easy pass and an easy goal. Once again he has read the play and responded brilliantly.

The development that we have seen from Erling Haland over the last 15 months is nothing short of staggering. When we profiled him last year it seemed a sure thing that he would become a top-class forward but we did not think that it would happen this quickly. A hat-trick in his first Champions League match has firmly drawn the attention of the world’s media and Haland is now on his way to becoming a household name across the footballing world.

What is truly frightening is that at 19-years-old he is far from the finished product. If he continues to develop, and he is in the perfect place to do so, then he will go on to become one of the top strikers in the world. The consensus seems to be that RB Leipzig will take advantage of their close relationship to the Austrian side to take Haland to Germany. There is perhaps another option for the Norweigian with the giants of English football monitoring his situation. There is no doubt that any side lucky enough to sign Haland will be getting a remarkable goalscorer.