The performances of Red Bull Salzburg in Europe over the last few seasons have been superb. They have still to qualify for the group stages of the Champions League, but they have more than found their feet in the Europa League. Last season saw the Austrian side play their way into the semi-finals before unfortunately crashing out against Marseille.

This season has seen Salzburg again play in the Europa League and they won a difficult group including RB Leipzig, Celtic and Rosenborg. The draw for the first knockout round saw them face a Club Brugge side who had impressed in stages in a difficult Champions League group that saw them face Monaco, Dortmund and Atletico Madrid.

The difficulty that Salzburg have in European competition is that the winter break in Austrian domestic football stretches into February and as such, they have a lack of match practice when the knockout stages start. Indeed, this lack of game time was obvious in the first leg of this match where Club Brugge came away with a 2-1 victory.

Now, it fell to Salzburg to save the tie in the home leg. Salzburg coach Marco Rose has impressed hugely since taking on the role at the start of the 2017/18 season. Domestically Salzburg are dominant but the challenge comes in trying to go as far in Europe as possible. First, though, they had to overcome the Belgian side. 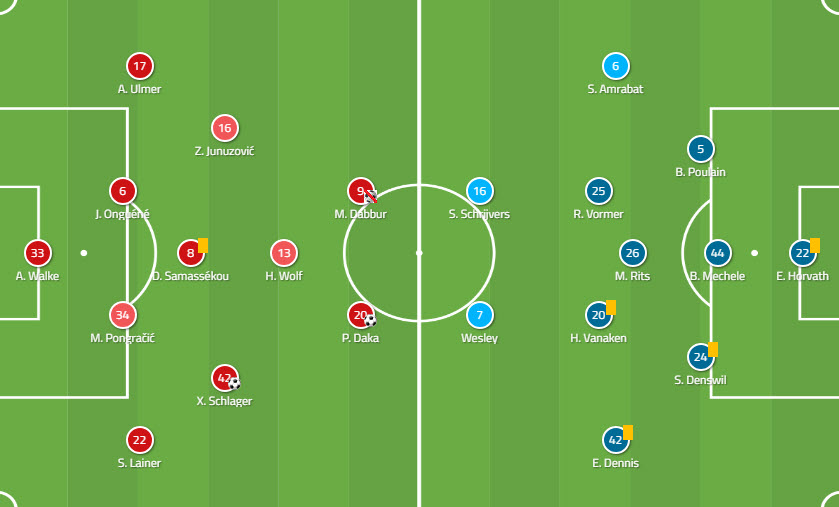 The Austrian side have a defined structure and play with a 4-diamond-2 system. The key to the system lies in the midfield with the Malian midfielder Diadie Samassekou playing as the six at the base of the midfield. He acts as the controlling midfielder when Salzburg are in possession. Xaver Schlager and Zlatko Junuzovic provide width and vertical runs while Hannes Wolf plays at the tip of the diamond, although he often makes runs beyond the attackers.

Club Brugge played in a 3-5-2 in possession but out of possession, the two wing-backs drop back to form a 5-3-2.

Salzburg out of possession

In the end, Salzburg ran out 4-0 winners on the night to seal a comfortable 5-2 win on aggregate. In the match itself, the Belgian side actually had slightly more possession of the ball, 57% to 43%. One of the strengths of this Salzburg side out of possession, however, lies in their pressing. 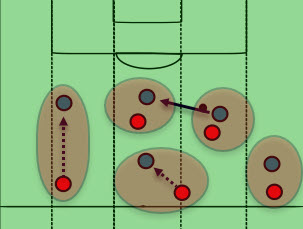 When Club Brugge were in possession and looking to build out from the back we saw Salzburg look to use a medium to high block with man-to-man pressing. Patson Daka and Munas Dabbur, the two forwards, worked hard to prevent Brugge from being able to comfortably progress the ball across the back three.

The front two engaged with the central defenders that were positioned closer to the ball. The central midfielder on the far side of the diamond pushed on to press the third central defender. Behind that, with Mats Rits playing as the six for Brugge, we saw Hannes Wolf press up against him.

The angles that the Salzburg players took when pressing prevented Brugge from being able to progress the ball cleanly through the press. They pressed whilst keeping other Brugge players in their cover shadow.

Salzburg play through the lines

Salzburg are extremely versatile in their attacking game model. They attack down the wide areas and in central areas equally with the two full-backs providing the width for the most part. When progressing the ball the two central defenders, Marin Pongracic and Jerome Onguene, and the six Diadie Samassekou are key in playing the ball forward through the thirds.

The two central defenders in particular are exceptional passers of the ball, and when given time they are able to pick passes through the opposition. This is where the diamond in the midfield really shines. The passing angles that are available to the central defenders when in possession mean that with the 4v3 numerical advantage in midfield always provides a way to play through. 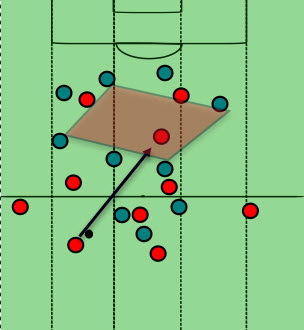 What we tended to see in the early stages of the match was an advantage where Hannes Wolf was able to drift into space beyond the Brugge midfield line to take possession of the ball via these drilled vertical passes.

When Salzburg play well it is clear that they are anything but possession orientated. They play with a clear tactical principle: to play the pass forward whenever possible. During this match, we saw this principle in clear effect. During the first half, in particular, the vertical passing from the central defenders and the vertical running from Schlager and Junuzovic combined to overload the Brugge defensive structure. This led to a 3-0 lead for the Austrian side at half-time.

Diadie Samassekou has emerged as one of the key players for Salzburg over the last two seasons under the coaching of Marco Rose. His fellow Mali international Amadou Haidara was equally important, but he made the well-travelled move to RB Leipzig in the winter transfer window. There are many who are of the belief that Samassekou will be joining him sooner rather than later.

During his time in the first team at Salzburg Samassekou has developed his ability to contribute in the attacking phase having previously been seen as a defensive midfielder. 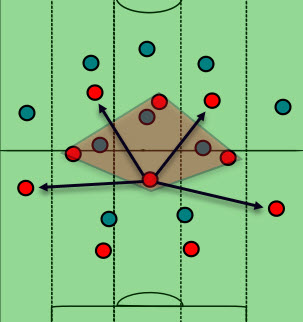 During this match, the Malian international tended to be the free man in the midfield with Brugge playing with a six and two eights. This meant that Samessekou became one of the key components for Salzburg when it came to progressing the ball out. With two Brugge attackers, we saw Salzburg have a 3v2 advantage with the two central defenders and the six.

As such wherever the Belgian side tried to apply pressure Salzburg were able to escape before playing forward. With Samessekou at the base of the midfield, he was perfectly positioned to take possession and then recycle it forward into more advanced positions.

Red Bull Salzburg have a reputation for identifying and developing young and talented players. It looks very much like they have unearthed another gem with the performance in this match of the 20-year-old Zambian forward Patson Daka.

Playing alongside the experienced Munas Dabbur we saw Daka continually make runs beyond the Brugge defensive line. He seemed to be constantly in motion seeking lanes in the Brugge defensive line that he could exploit through quick and explosive runs forward. Indeed, Daka ended the match with two goals, showcasing exceptional composure and timing to finish calmly past the goalkeeper on both occasions. 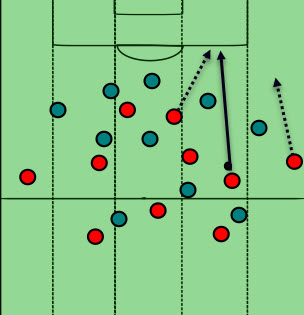 Whilst Dabbur operates more as a fixed position striker on the left side of the attack we saw a lot more off-the-ball movement from the young Zambian. Salzburg got a lot of success throughout the match using vertical passes down the outside of the three central defenders. These passes allowed Daka to use his acceleration to burst into space with a clear run on goal.

Both goals scored by Daka showed the composure and timing of the young forward as he moved in on goal and simply passed the ball past the Brugge goalkeeper. Showcasing such composure at a young age is a sign of an extremely talented striker.