The Austrian Marcel Sabitzer played until now every possible second in the Bundesliga this season under the new coach Julian Nagelsmann. RB Leipzig is the only team which were able to win the first three games of this new campaign and so they’re logically currently in the first position. The 25-years-old player is also one of the best players of his motherland Austria and their third most valuable player with a market value of £22.5 million. Only David Alaba and Marko Arnautović are the two Austrian footballers who have a higher market value than Sabitzer.

In this tactical analysis in the form of a scout report, we will look at Sabitzer’s all-round abilities and examine why he fits in RB Leipzig’s tactics.

In the first three matches in the Bundesliga, Nagelsmann used three different formations and Sabitzer played in two different positions. When they used a 3-4-3 and a 4-4-2 he played as the right-winger both times, while on the second matchday the Austrian was a central midfielder. This brings us to his first quality.

The 25-years-old can play in every offensive position. At his former clubs, Rapid Vienna and RB Salzburg he played as striker, offensive midfielder or a winger. However, since he joined Leipzig, he made 148 appearances for them and just five as a striker. In the remaining 143 games, he was either a central midfielder or a winger. This statistic perfectly shows Sabitzer’s versatility.

When you look at his heatmap for the first three Bundesliga games this season, you can clearly see that he was mostly positioned on the wing to provide width for his team. However, it also gets visible that the Austrian likes to drift inside as we will see now in this analysis.

The 25-years-old player isn’t permanently in the same position during games but likes to move between the lines and always looks for free spaces to provide a passing option for his teammates. Since Leipzig is among the favourites to win the Bundesliga this season and they are among the best teams in this league, most teams have huge respect and let Nagelsmann’s team dominate the game.

Considering this, players like Sabitzer who move between the lines and don’t just stay in their position, are really important to progress the ball further up the pitch. However, he makes these movements also when he plays for his national team, as you can see in the example below. 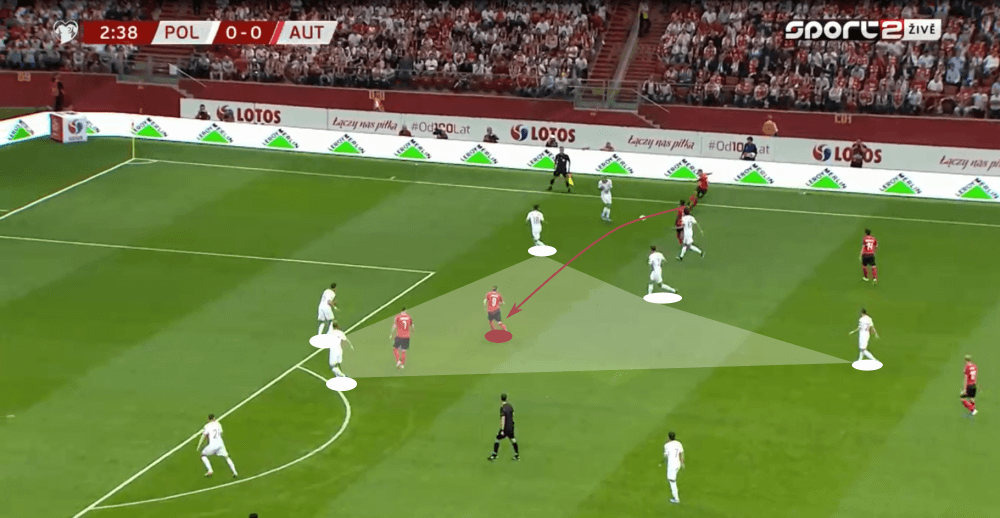 Since Leipzig usually press their opponents very high up the pitch, the Austrian is very important for his team when the opposition is in possession. In the example below, he and Emil Forsberg switched sides and they build four-man line with the two strikers up front.

As soon as the goalkeeper Yann Sommer plays a pass to his defender Matthias Ginter, Sabitzer rushes forward to put pressure on him. It’s a typical scene for Leipzig. They provoke the short pass to then press in at the opponent. 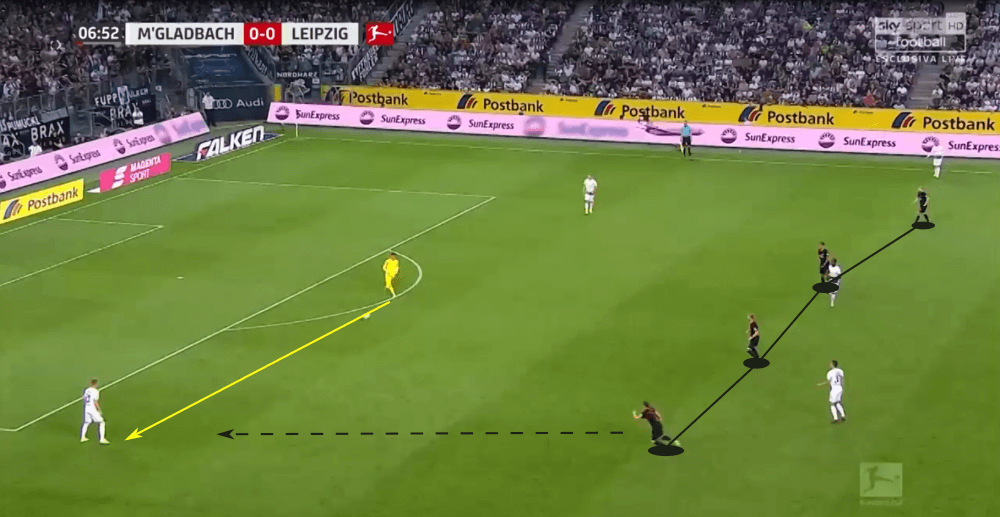 Vision to find his teammates

As we will see in the rest of this analysis, Sabitzer is a real all-rounder when it comes to his offensive abilities. In the first three league games and the one DFB Cup fixture this season, he scored three goals and provided three assists combined. These are quite incredible stats for an offensive midfielder and show that he is dangerous in front of goal but is also able to find his teammates with the final pass.

Within his last years at Leipzig, the Austrian also developed his vision and his passing abilities. In the first three matches of this season, he had an average passing accuracy of 75%. At first glance, that percentage isn’t outstanding at all. However, you have to consider that Sabitzer is a player who is always looking for the through ball behind the last line of the defence.

The 25-years-old usually receives the ball higher up the pitch and tries to create goalscoring chances from there with risky paces. In light of this, it’s logical that his success rate isn’t that high.

In the image below, you can see that he’s an offensive thinking player. Sabitzer receives a pass from a teammate on the wing, controls it with the first touch and plays a diagonal through ball with his second touch to progress the ball further up the pitch. 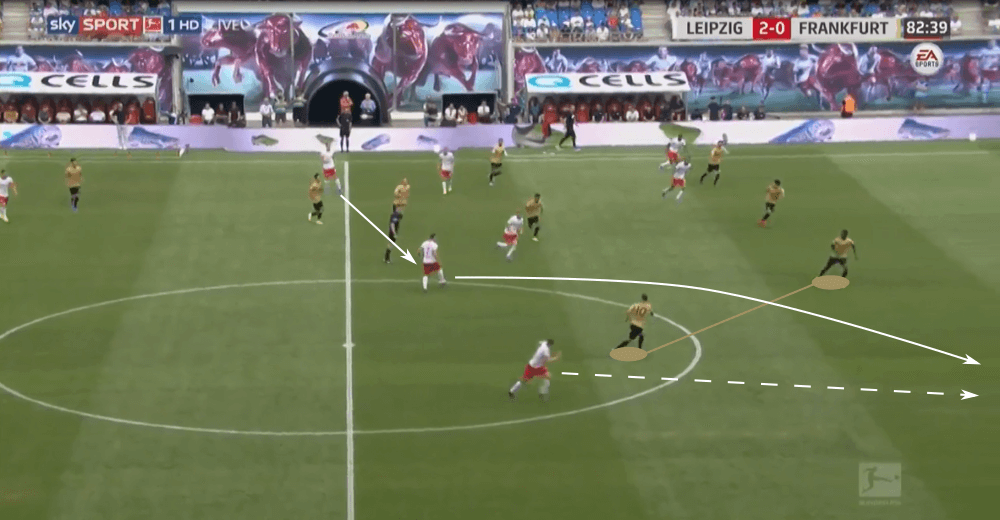 Since the Austrian quite often plays on the wing, he usually comes into crossing positions on the wing or in the half-spaces. Since Yussuf Poulsen is the only offensive player of Leipzig who is strong in the air, Sabitzer usually tries to play the ball to his teammates with kind of a low cross like in the example below.

The midfielder is in the half-space on the ball and finds his teammate Marcel Halstenberg on the left wing with a low ball. The left-back converts this great cross into a goal to score the 1-0 against Union Berlin.

Sabitzer likes to play long balls. In the first three matches of this year’s Bundesliga season, he averaged 4.44 long balls per 90 minutes. That’s a lot, especially when you consider that Leipzig is a team which usually mainly use short passes during their build-up.

However, the Austrian has got the quality to play such passes, as you can see in the example below from last season. He finds the striker Timo Werner, who can score with a header, with a perfectly timed long ball. This is another example of his great vision and the ability to play incredible passes.

Back during his time at Rapid Vienna and RB Salzburg his two biggest strengths were his dribbling ability and his undeniable pace. With time he also developed his passing skills which already got described in this analysis, but in the early stages of his career, his speed with and without the ball were the greatest threat for the opposing defenders.

Even though he doesn’t dribble that much anymore, he still uses his ability on the ball combined with his acceleration when needed. In the example below, he plays a little give and go with his teammate to use his speed to get past the opposing defenders on the wing. 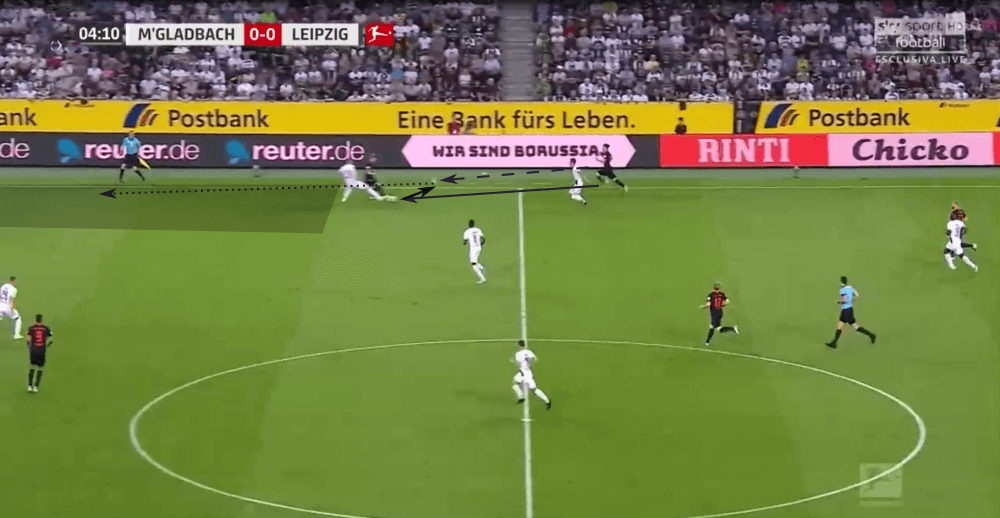 During the first three matches in this Bundesliga season, He averaged just 2.54 dribbles per game, which is not an outstanding value. The likes of Marco Reus, Kai Havertz, Breel Embolo, Kingsley Coman or his teammate Werner all make, at least, 4.71 dribbles per game on average. However, his success rate is incredible with 75% and by far better compared to the percentages of the other aforementioned players. Embolo has got the next best percentage with 63.2% and the other ones have an even lower value.

The main reason for that is that Sabitzer just starts to dribble when he has a good chance to create something from it. Also, he cleverly uses his body to first shield off the opponent and then uses his pace to get away from them. He utilises both aspects in the example below. He uses his strength to cover the ball and then just turns around his opponent with the ball. As soon as he does that, he gets away from his opponent due to his speed and dribbles into the free space.

However, he also often combines his speed with his vision and intelligent movements to find free spaces further up the pitch, like in the image below. Union Berlin’s defenders aren’t positioned well and Sabitzer can bring himself into a good position at the second post. Halstenberg finds him with a perfect cross and the Austrian lays off the ball for Leipzig’s summer signing Christopher Nkunku, who then scores.

Sabitzer scored two goals in the DFB Cup fixture against Osnabrück this season and one goal versus Union Berlin on the opening matchday of this Bundesliga season. The Austrian likes to join his strikers in the dangerous areas upfront and, as already mentioned, is always able to find free spaces and position himself there.

Furthermore, the 25-years-old has got a great shooting technique and is able to score with both feet. Even though the right one is his strong foot, he’s also able to score with his left one as he did on the first matchday of this Bundesliga season. As already shown, Sabitzer assisted the first goal which Halstenberg scored with a good low cross.

The second goal was exactly the other way around. The left-back played a low ball into the centre where Sabitzer once more perfectly moved into the free space. He delivers a perfect shot with his weak left foot and places it in the left top corner while the goalkeeper was on his way to the centre of the goal and was helpless. 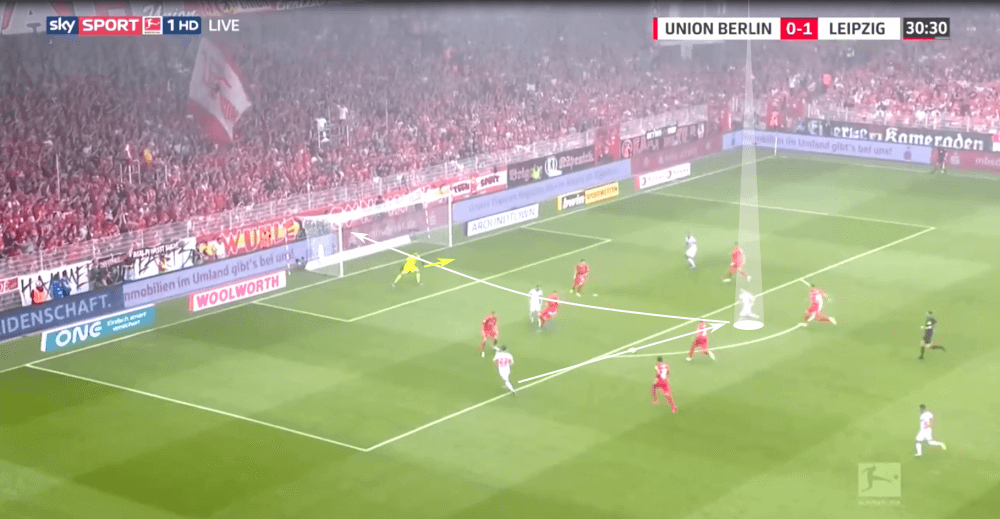 But the Austrian is also one of Leipzig’s players who are responsible for the set pieces. Besides the likes of Forsberg and Halstenberg, he usually delivers the corners and also sometimes takes some free kicks. Last season h e was able to score twice after a direct freekick. One of these two is shown in the image below.

He once more looks what the goalkeeper would do and places it in the other corner. Since Lukáš Hrádecký is positioned very central and also makes one additional step to his right corner, Sabitzer shoots into the actual corner of the goalkeeper. With that goal he once more proved his intelligence on the pitch and that his decision making is great.

This scout report in the form of a tactical analysis showed that Sabitzer perfectly fits into Leipzig’s tactics with his pace and ability on and off the ball. Nagelsmann likes his team to utilise a high pressing which Sabitzer already knows from his time at RB Salzburg. His movement into free spaces and flexibility helps his team to break down opposing defences.

It will be interesting to watch how many different formations RB Leipzig will use this season and in which different positions the Austrian will play. This variability could be one of the key factors for their success in this season.