Phoenix Rising returned to California to take on Orange County SC as the two teams went head to head for the second USL match in a row. The two teams faced off last week as well, where they shared the points in a 1-1 draw. This week, Orange County were able to secure all three points by taking advantage of their counter-attacking chances and certainly benefiting from Rising going down a man just before half-time.

This tactical analysis will examine the tactics used by both Rick Schantz and Braeden Cloutier; it will provide an analysis of how Rising attempted to beat Orange County’s press and how they attacked once they went down to ten men. 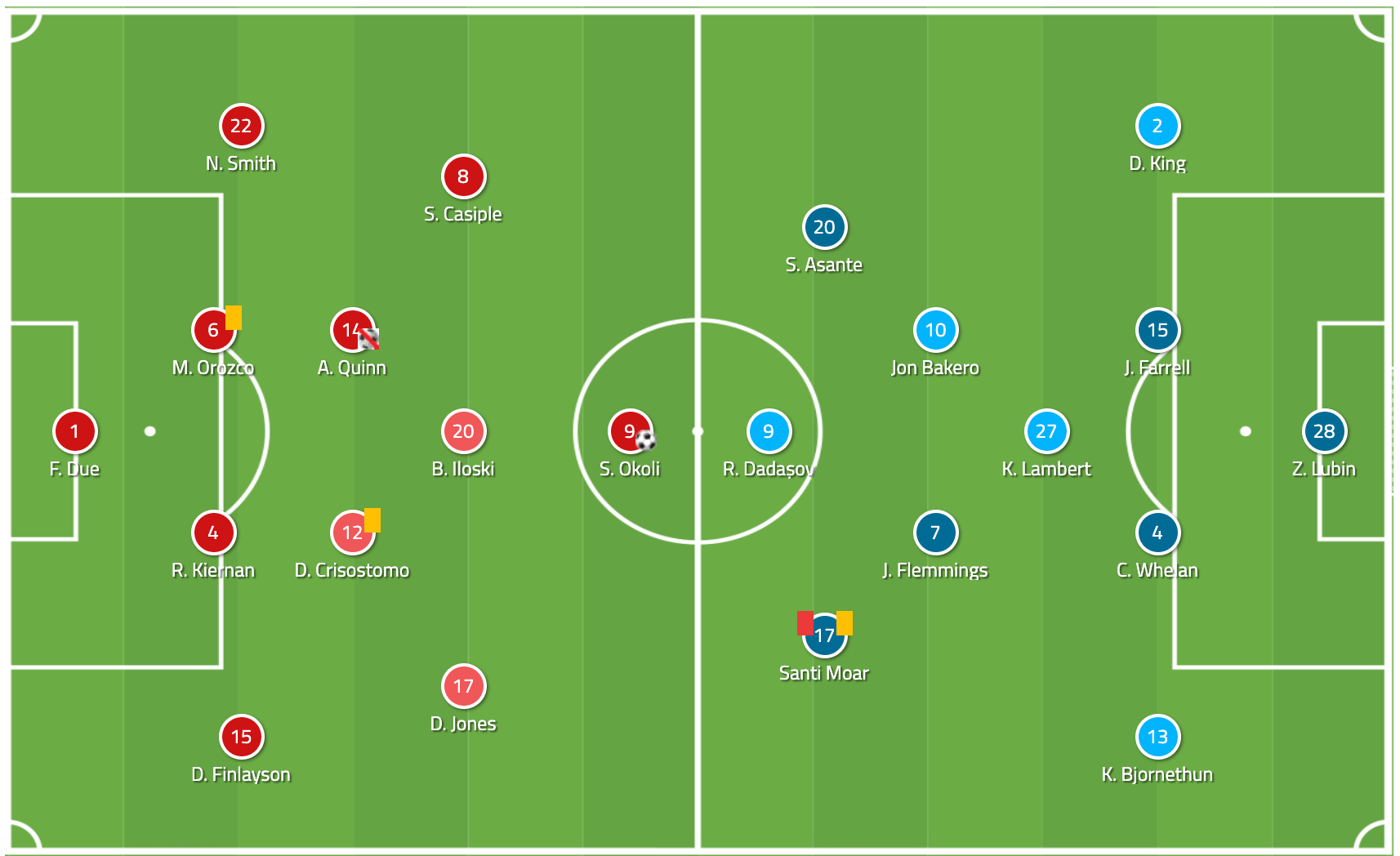 Orange County came out in a 4-2-3-1 formation with Frederik Due in goal.Their centre-backs were Michael Orozco and Rob Kiernan, with Nathan Smith as the left-back and Daniel Finlayson as their right-back.  Aodhan Quinn and Daniel Crisostomo were the defensive  midfielders with Seth Casiple on the left flank, Brian Iloski as the attacking midfielder, and Darwin Jones on the right flank. In front of those three was Sean Okoli, who scored the game’s loan goal.

Rick Schantz sent Rising out in their usual 4-3-3 with Zac Lubin in goal. Darnell King started as the right-back, with Corey Whelen and Joe Farrell as centre-backs. Kyle Bjornethun started as the right-back, replacing Owusu-Ansah Kontor, who received a red card at the end of the last match, preventing a break-away goal from likely being scored. Kevon Lambert, Jon Bakero, and Junior Flemmings started in the midfield. The front three consisted of Santi Moar on the left-wing, Solomon Asanté on the right-wing, and new signing Rufat Dadashov, who spent time in the lower leagues of the Bundesliga, as the centre-forward.

Rising struggle in the build-up again

In their match last Saturday, Phoenix struggled to build-up against Orange County’s press. Orange County was able to use their two forwards against Rising’s centre-backs and defensive midfielder to force the ball long quite often. They accomplished this by angling their runs appropriately and using their defensive cover shadow to prevent the Rising midfielder from receiving the ball. Phoenix stuck with their 4-3-3 formation, but they made a couple of adjustments in an attempt to play through Orange County. The first thing they did was widen the position of the centre-backs. 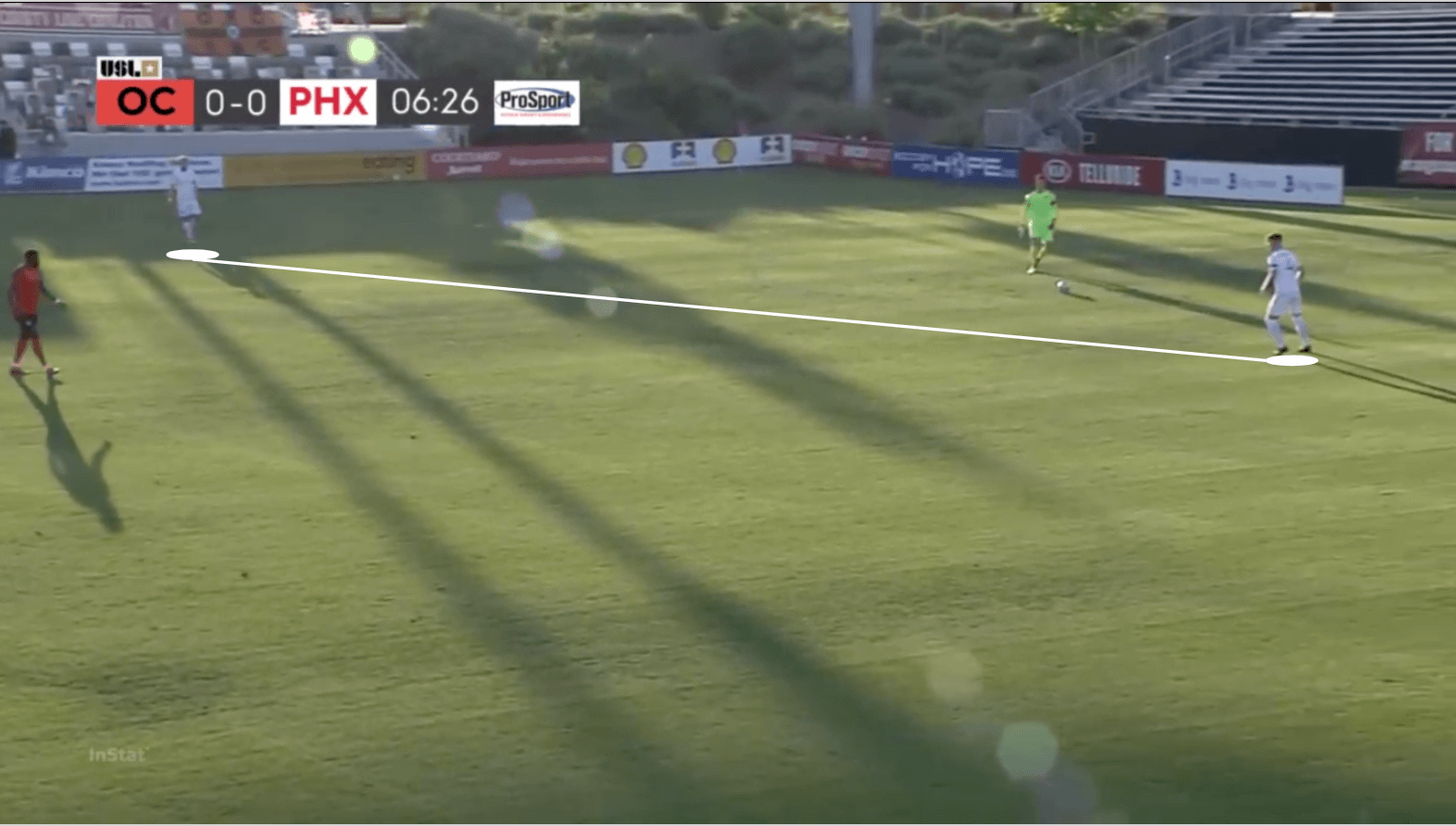 In the image above, both Whelen and Farrell are in much wider positions than the centre-backs from last week. This was done in an attempt to stretch out Orange County’s pressing players. However, this week, Orange County brought more pressure in their 4-2-3-1 defensive structure. This meant that while the width would help to widen passing lanes, it would ultimately only result in one Orange County player being beaten as opposed to two. If Rising wanted to beat more than one player, they needed to use their centre-backs to dribble forward, attracting pressure in the process. This would open up space for other teammates higher up the pitch, who those centre-backs could then play into. At the beginning of the match, Phoenix instead opted to add a midfielder to their back line, usually having one of the three drop in between the centre-backs and outside-backs. Schantz is on record saying he prefers all midfielders be able to play a conventional 8s, meaning they’ll contribute on both ends of the pitch. While attempting to do just that, this often led to confusion and an emptying of the midfield, which would prove to be costly. 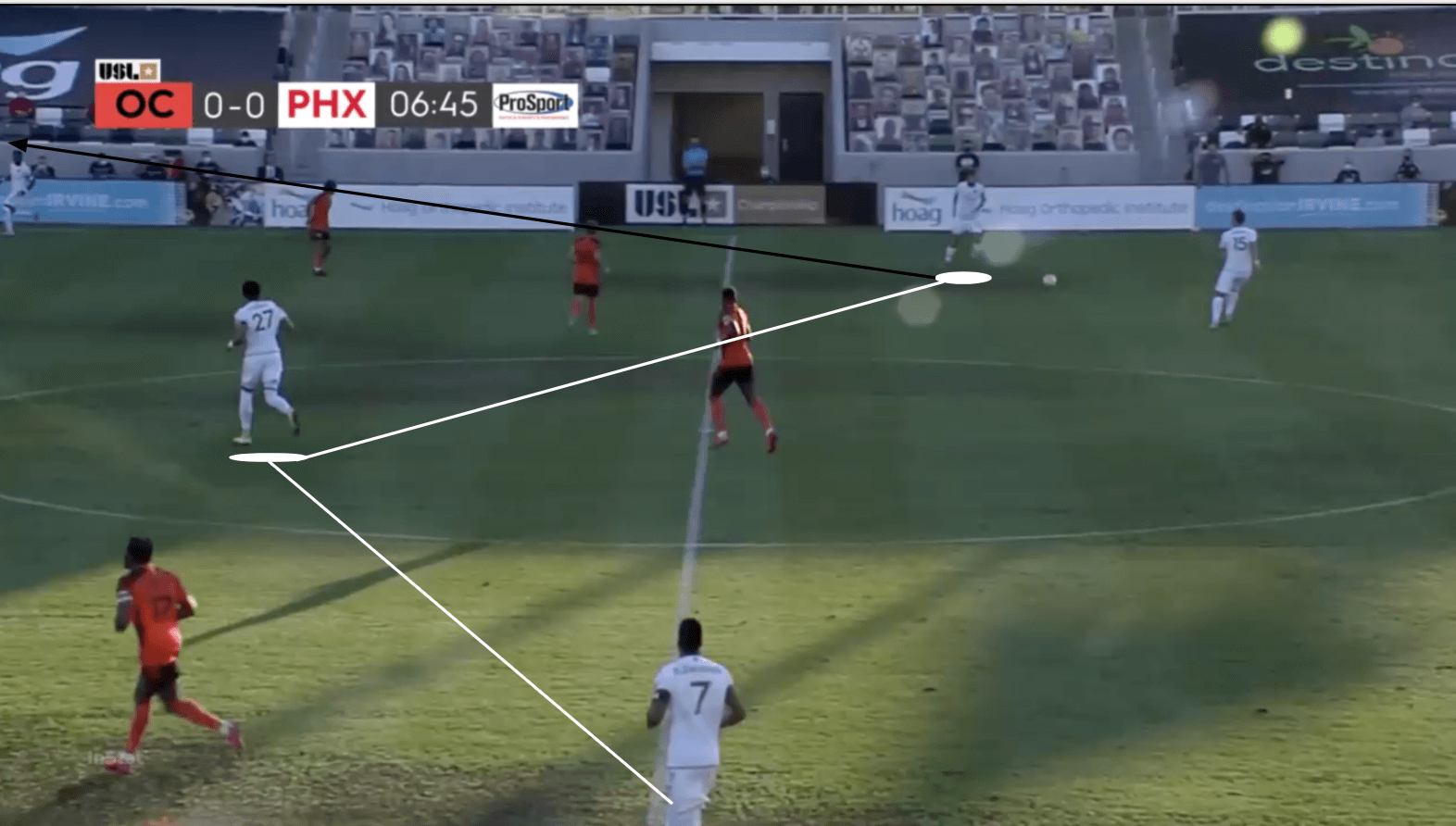 Multiple times in the first part of the match, Rising would drop two of their central midfielders into the back line to again try to stretch Orange County’s press. In this instance, both Flemmings and Bakero dropped in between a centre-back and outside-back. This did give Rising a positional advantage, but their next problem then became that their midfield was essentially left abandoned. While Lambert was there, he was significantly outnumbered and unable to receive a pass. This led to longer aerial passes that didn’t really bring about any significant chances. 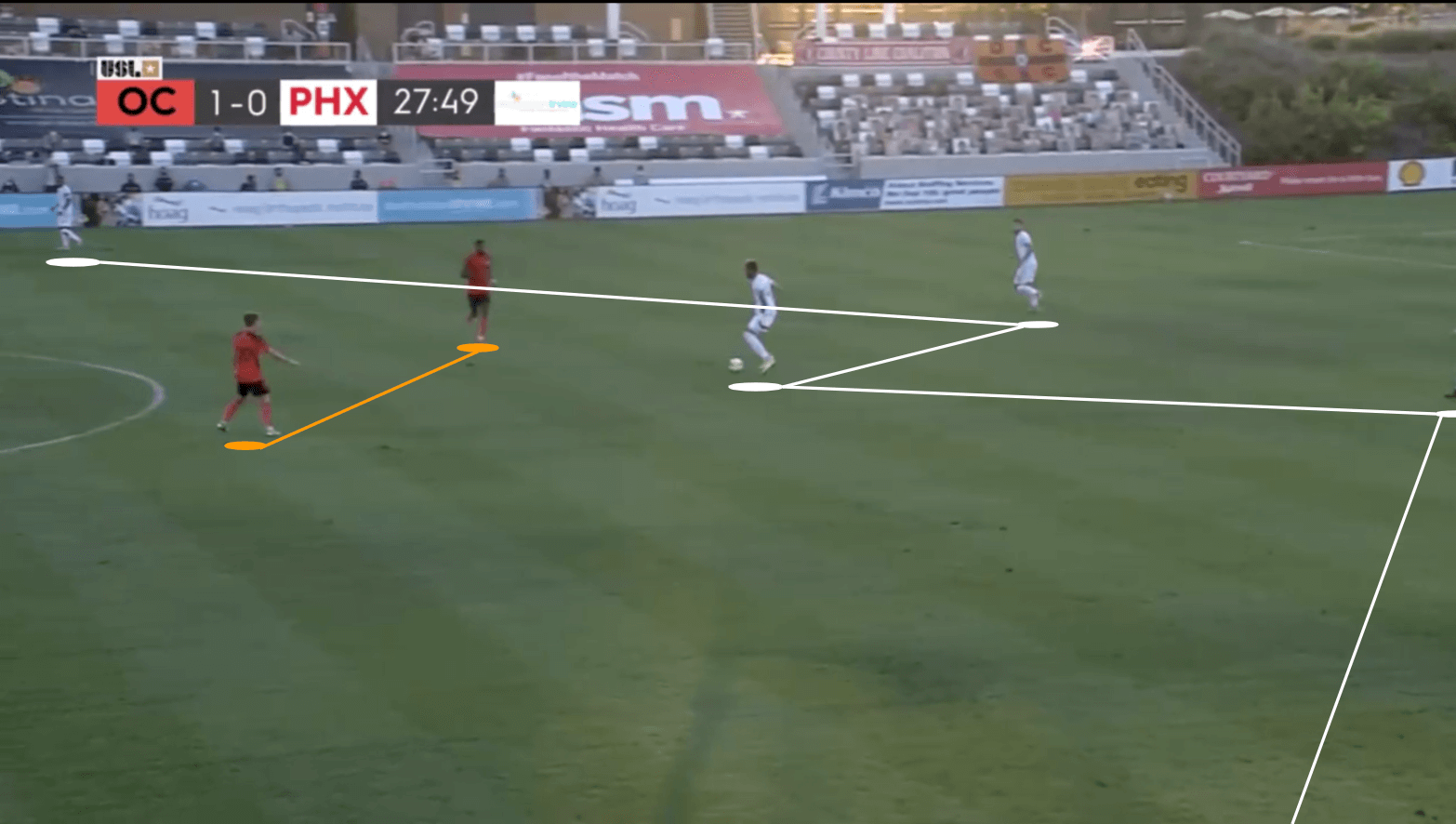 When Lambert tried to drop down to help progress the ball, his positioning in relationship to the defence often put Rising at a disadvantage. In the image above, Lambert had dropped centrally and had the ball at his feet. Phoenix’s back line and holding midfielder had built the conventional ‘W’ shape that is often seen in build-ups of teams who play in a 4-3-3. The problem here is that they now essentially have five men behind Orange County’s first line of defence. This also meant that their teammates higher up the pitch are severely outnumbered. This makes it incredibly difficult for Phoenix to play their fast-paced, fluid attacking game, and it ultimately led to their downfall in the match.

Orange County lethal on the counter

Orange County were both patient and disciplined, similar to the defensive ethos seen in Atletico Madrid in La Liga. Not only were they defensively-sound, but they also took advantage of Rising’s midfield struggles to grab the lead. Orange County registered multiple counter-attacks from various points in the pitch, but their most dangerous ones came from the central third. 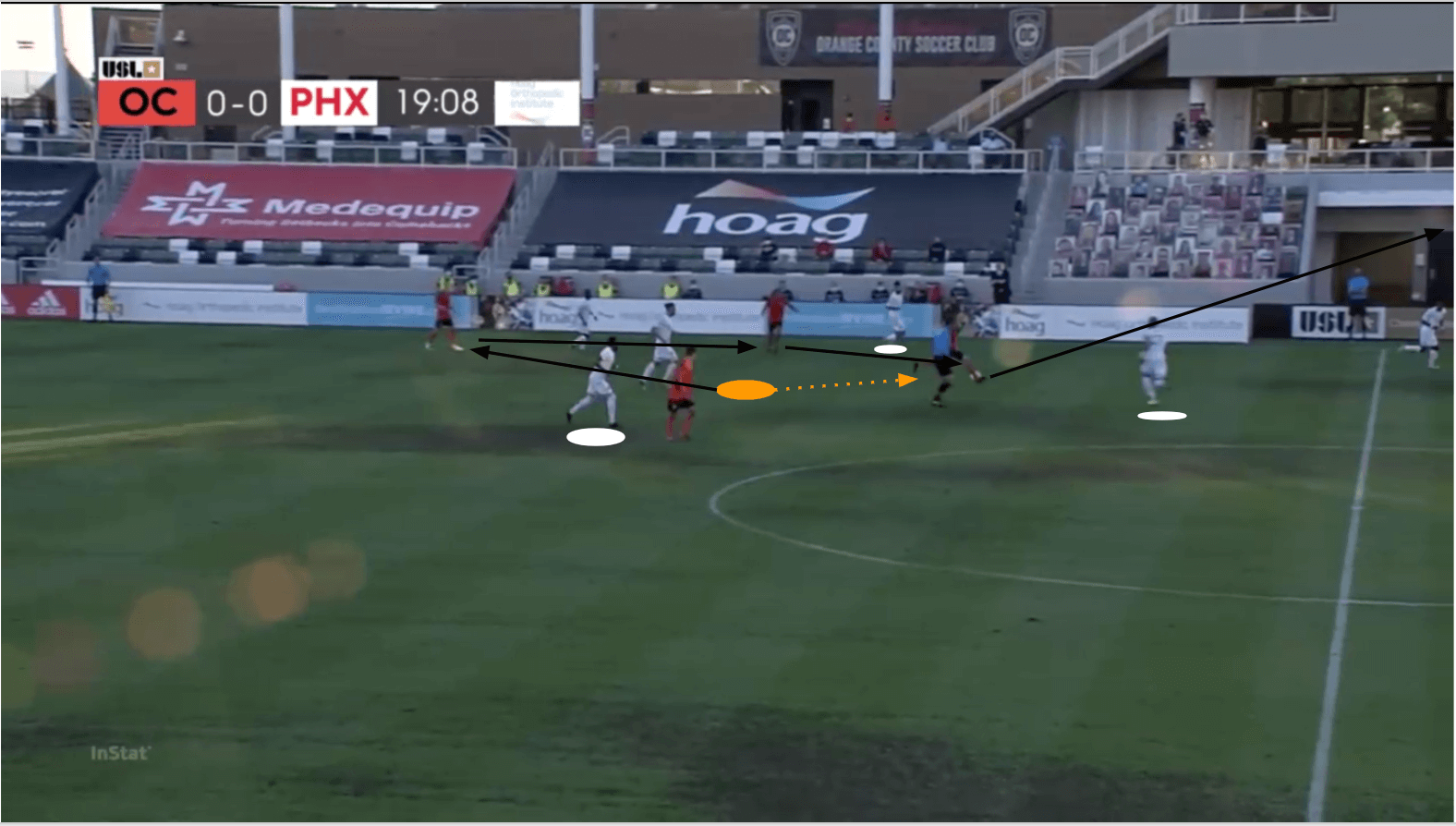 Orange County were able to register the first (and only) goal of the match after winning possession in that central area. Aodhan Quinn started the move by playing the first of three quick passes that saw Phoenix press but unable to win possession. Quinn then got the ball back at his feet with lots of space to deliver a first-time through ball to Sean Okoli, who was able to hold off Whelen and bury the chance in the back of the net. The key part that Orange County was able to take advantage of was the defensive positioning of Rising’s midfield. Bakero was pressing up the left side because he had been positioned in between his centre-back and the right-back (as explained above) and Flemmings was higher up the pitch, attempting to receive the ball closer to his left-wing position. This meant only Kevon Lambert could press Quinn, but he was too far away. 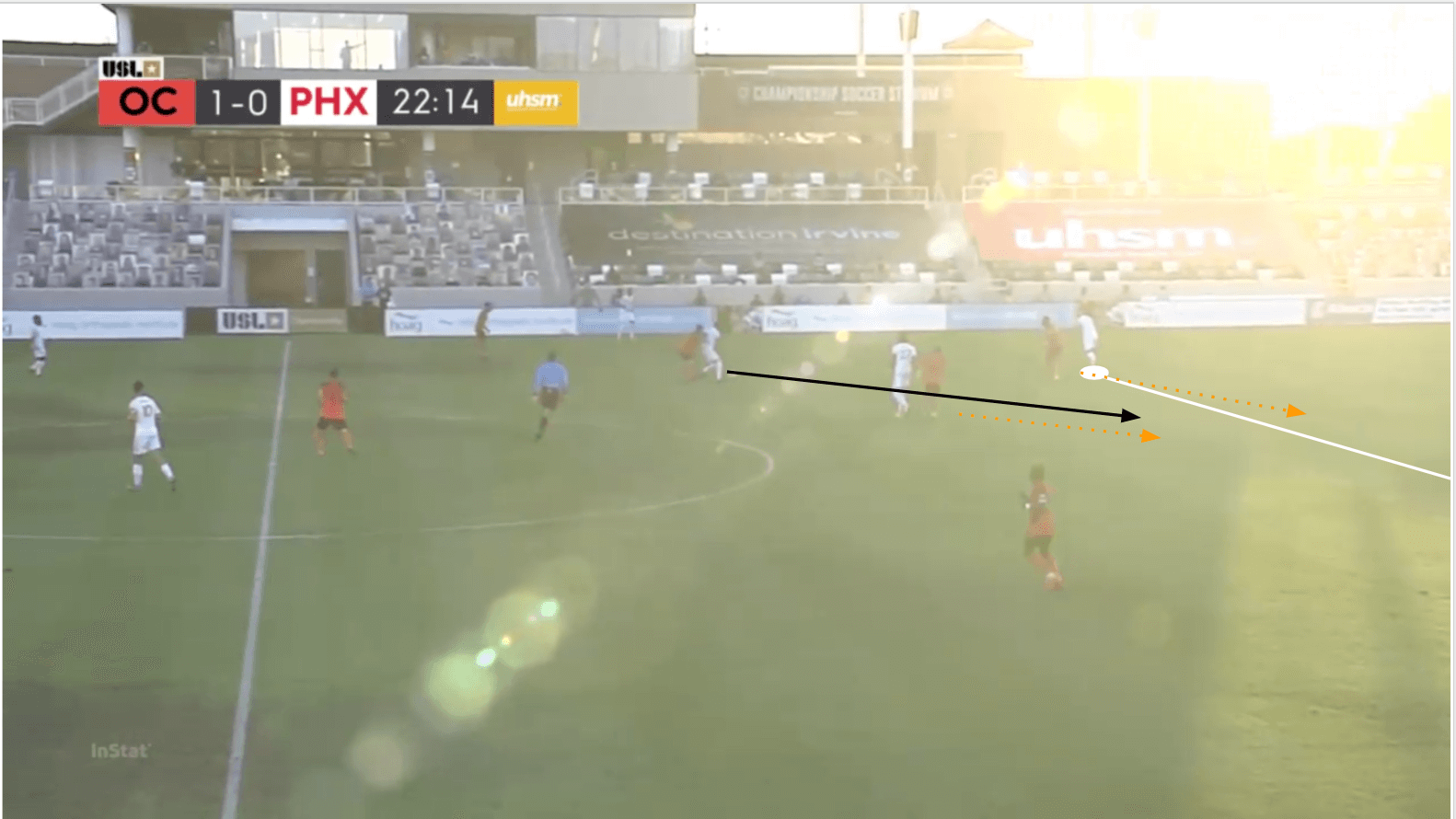 Orange County looked to take advantage of some of the miscues from Rising, who struggled in their build-up. In the image above, Quinn stepped in to win the ball against Flemmings, who had dropped to receive the pass. Quinn’s first touch sprung Brian Iloski. Iloski was in so much space because of how wide Rising’s central defenders had been playing. Farrell was out of position to defend, and Iloski was able to dribble at Whelen. Iloski also had Okoli next to him, essentially creating a 2v1 situation. While Iloski did well to attract Whelen and create space for Okoli, his pass to Okoli was too strong, and he wasn’t able to get a shot off on goal. Orange County’s pace at which they countered made them incredibly dangerous; in the instance above, it took a mere three seconds from Flemmings losing possession to Iloksi slotting an over-hit pass to Okoli.

Later in the match, Orange County continued to look to find enough time to turn up field and play Okoli into the space behind Rising’s back line. After the water break, Rising had switched to a 4-2-3-1 with Bakero and Flemmings as the holding midfielders. Bakero and Moar had just completed a positional rotation, so Moar was providing the pressure on the ball-carrier, Nathan Smith. Smith held onto the ball, attracting Moar in the process. 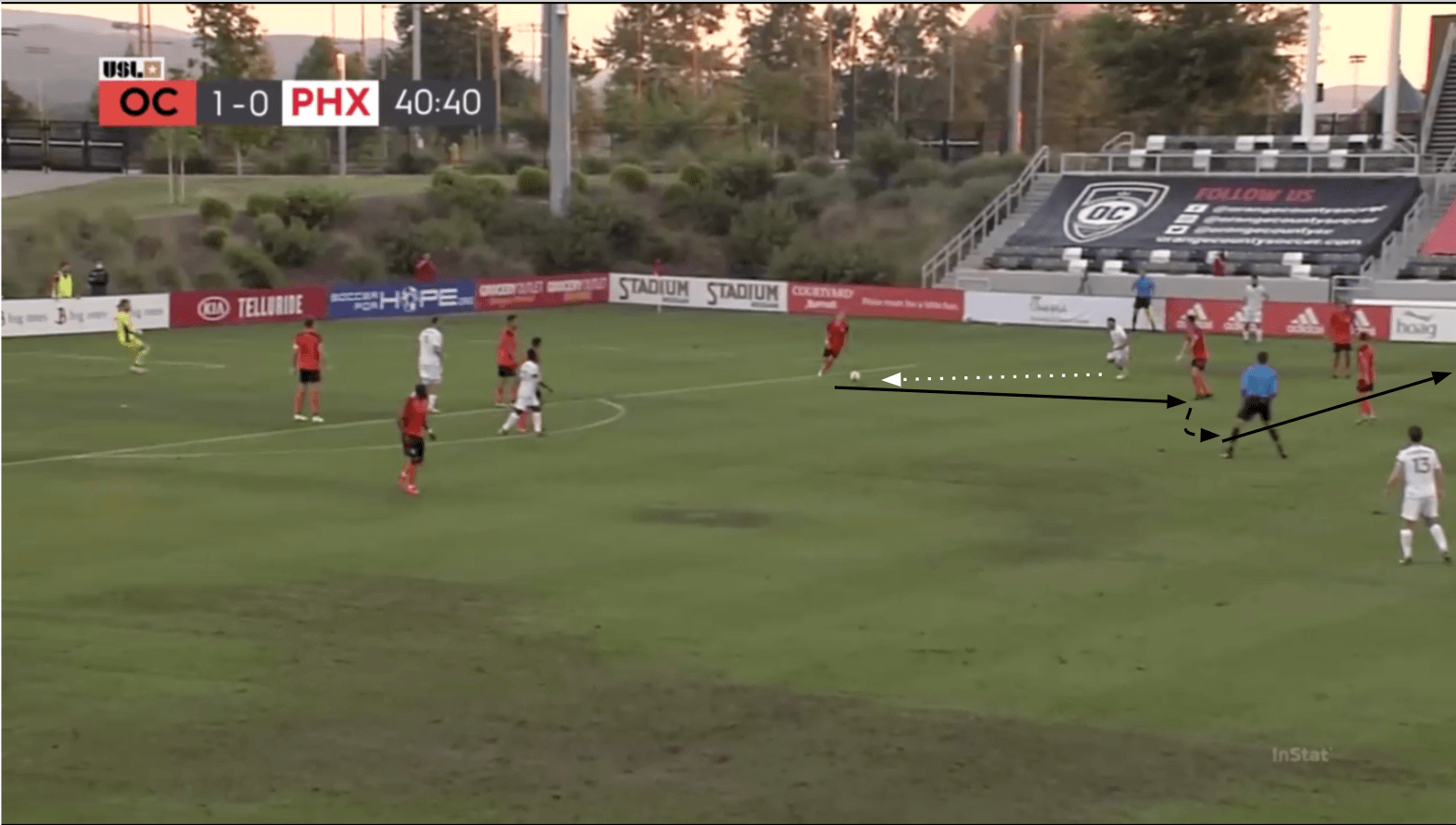 As Moar pressed, he was not followed by any of his Rising teammates. This may be due to a lack of communication or lack of positioning, but Asanté, who was playing as the 10 in this instance, was too high up the pitch and Bakero was out on the wing. There were actually three Orange County players who could have received the ball, but Smith played it to Quinn, whose instincts to find space behind Phoenix’s back line caused problems all evening. Quinn turned and fired a pass into Okoli, who was in behind. Luckily for Phoenix, Lambert was able to recover just as Okoli arrived in the penalty area, stopping any potential scoring opportunity in the process.

Just before half-time, Santi Moar and Orange County manager Braeden Cloutier had an exchange that saw Moar push Cloutier (albeit lightly). Both men received yellows for the incident, but it was Moar’s second and Rising were down to ten men. Phoenix was still chasing the game, and so they continued to push and press as they do so consistently when they’re at full-strength. 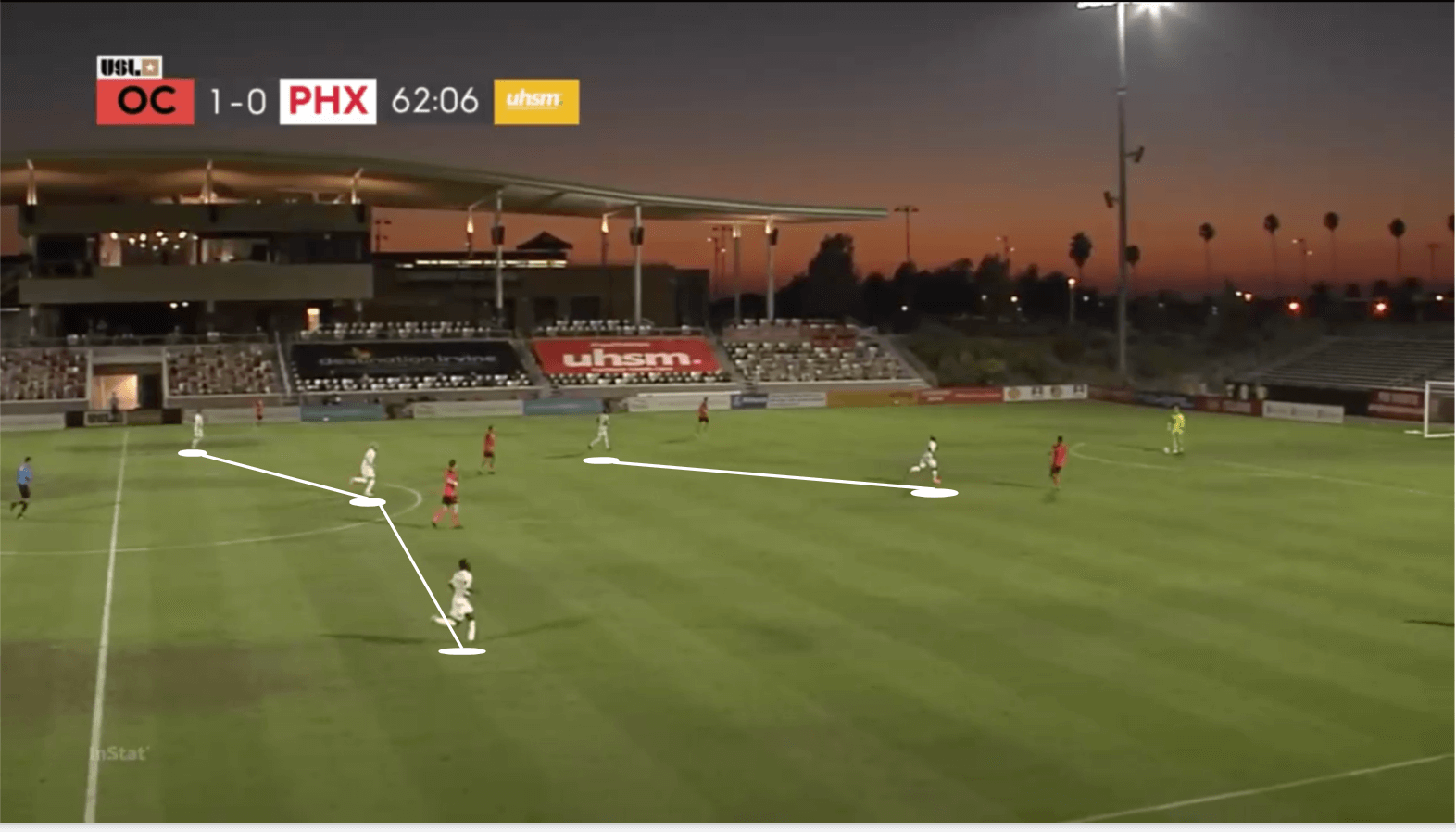 Rising continued to press, although now with five men as opposed to their normal six. Both Lagos Kunga and Junior Flemmings pressed as forwards, looking to seal off passes to the interior and force the ball long. They were supported by the three midfielders shown above. If needed, Rising would also send Lambert forward to press the ball. While this would leave them with only three at the back, the risk often paid off as Orange County were able to exercise some patience with their attacking chances. Rising looked to win the ball back and then find their attacking shape, shown below. 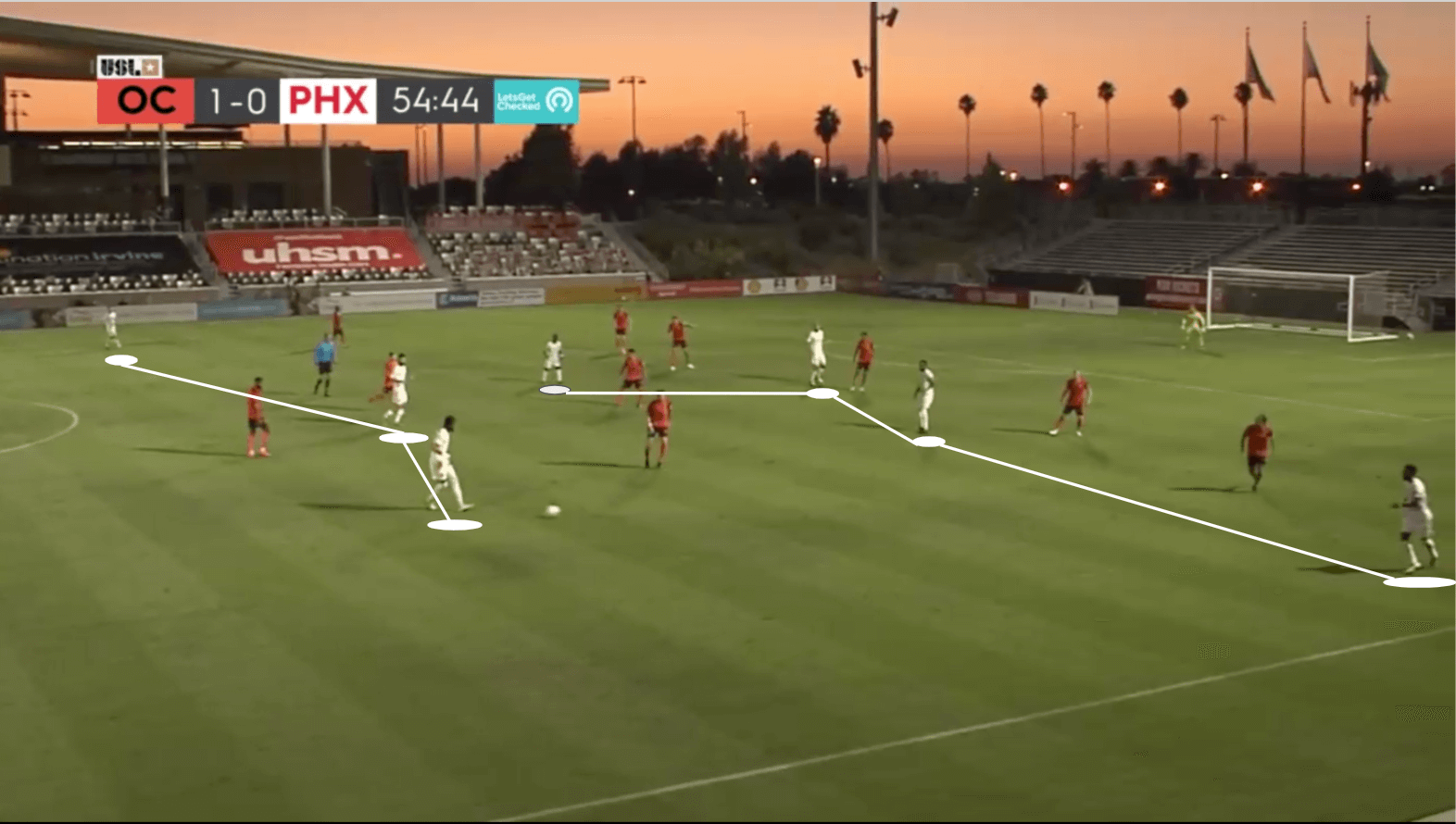 When they were most disciplined, Phoenix looked to find this attacking shape, which was essentially a 2-3-4. This was done by pushing up their outside backs to different ‘heights’ on the pitch. Their centre-backs would stay put, and Lambert and Bakero, who were the holding midfielders in their 4-2-3-1, were in the centre of the pitch. In this instance, with Lambert on the ball in the right half-space, Darnell King, the right-back could push up to the attacking line and provide width for Rising, while the left-back, Kyle Bjornethun, could provide support in the midfield. This would allow for Rising players to get in between defensive lines of pressure, which would cause real problems for Orange County. However, more often that not, Rising was not able to find this attacking shape. Instead, they continuously tried to gain an advantage during transitions. 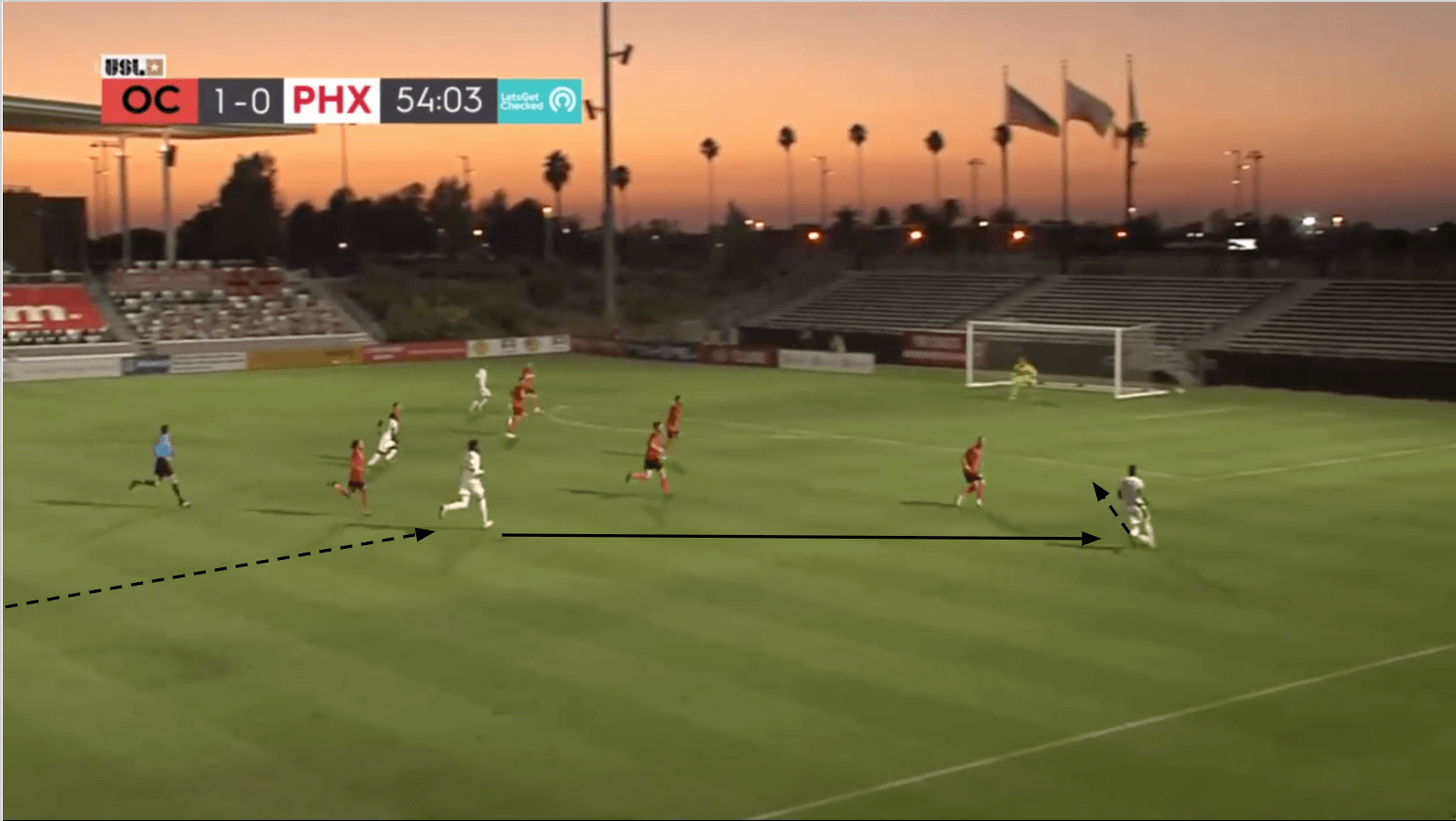 An example of Rising doing so is shown above. Lambert won possession in his own half and dribbled up the pitch before laying the ball off to Flemmings, who was on the right flank. Flemmings tried to create space for himself but was ultimately unsuccessful. What stands out most about these attempts at attacking is that Phoenix was vastly outnumbered on a consistent basis. Orange County didn’t need to commit men forward as they already had the lead. This meant that most of the opportunities for a transition to occur (which Phoenix exploits so well) weren’t going to happen. Above, Rising only had four men forward compared to Orange County’s seven: an unlikely scenario in which Phoenix could score. Rising would have likely been much better off finding that 2-3-4 and trying to create a positional or qualitative advantage instead.

Rising will certainly leave the game feeling frustrated. While they came in with a plan to progress the ball into Orange County’s half, they were still stymied by their opponent’s press. They dug themselves deeper into the hole with Moar’s red card just before half-time. Orange County ultimately did enough to earn all three of the points, taking full advantage of their counter-attacking prowess. Phoenix’s next match comes against El Paso on Saturday while Orange County travels to Sacramento to take on Sacramento Republic FC.