Phoenix Rising and New Mexico United clashed in a USL Championship battle at Casino Arizona field in Scottsdale, Arizona on Saturday evening. Based on recent results against El Paso Locomotive, it seemed like a competitive match was guaranteed, with Rising favoured a bit more than New Mexico. After going a goal down early, Phoenix proved that they deserved to be the favourites, ultimately defeating New Mexico United by a score of 5-2, behind a hat trick from standout player Junior Flemmings. 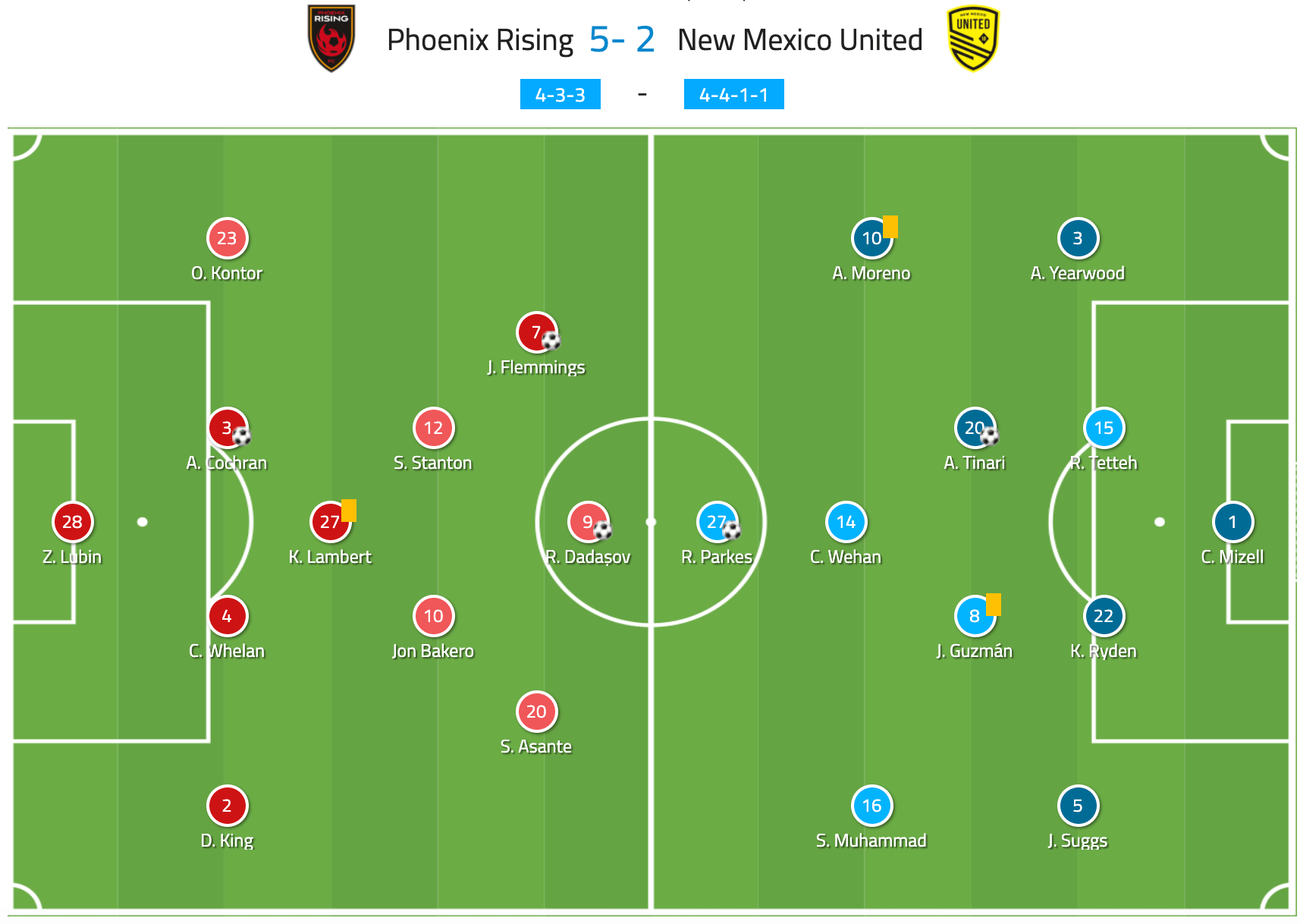 Rick Schantz sent Rising out in a Barcelona-esque 4-3-3 with Zach Lubin in goal. Lubin was the only change from last week’s match against El Paso. Darnell King started as the right-back, with Corey Whelen and A. J. Cochran as centre-backs, and Owusu-Ansah Kontor as the left-back. Kevon Lambert was the holding midfielder with Jon Bakero and Sam Stanton as the other two central midfielders. The front three consisted of Junior Flemmings on the left-wing, Solomon Asanté on the right-wing, and new signing Rufat Dadashov, who has spent time in the lower leagues of the Bundesliga, as the centre-forward.

Troy Lesesne sent United out in a 4-4-1-1 with Cody Mizell in goal. Josh Suggs started at left-back with Kalen Ryden and Rashid Tetteh as the centre-backs, and Austin Yearwood as the right back. The two central midfielders for New Mexico were Andrew Tinari and Juan Pablo Guzmán, with Amando Moreno on the left flank and Saalih Muhammad on the right. Romeo Parkes was the centre-forward for the evening, and he was supported by Chris Wehan, the club’s leading goal-scorer.

New Mexico’s use of width

New Mexico United looked to establish themselves in wide areas in order to progress the ball up the pitch. This makes sense for them because Rising often press using their 4-3-3 formation with their wingers on the opponents centre-backs and their striker marking a defensive midfielder. While Phoenix did need to commit another midfielder forward in the match in order to match up with New Mexico’s two midfielders, this still allowed for space to open up on the wings. Early on in the match, New Mexico took full advantage, grabbing the lead in the process. 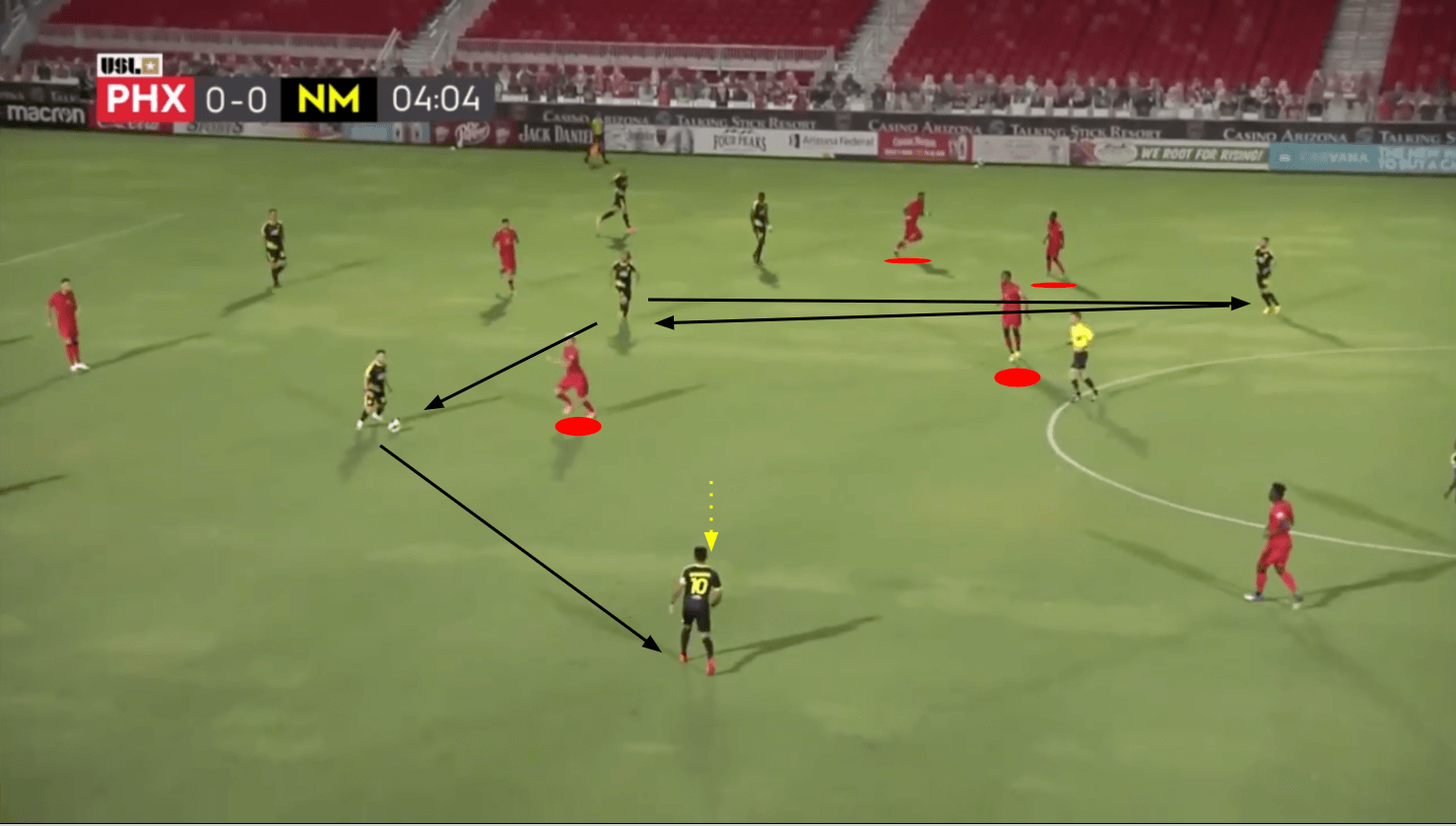 When New Mexico retained possession in their own defensive third, they utilised a quick wall-pass. This froze the Rising defenders in their place, as they often look to counter-press, especially when in the opponents’ half. Amando Moreno began to move out wide, finding himself in lots of space to receive the ball from Andrew Tinari. Moreno was able to turn up the pitch with plenty of room to create, which was exactly what he did. A long forward cross to the head of Romeo Parkes caught Zach Lubin out, and Parkes calmly looped the ball over Lubin for the first goal of the match.

In the instance below, New Mexico attracted pressure in the centre of the pitch during their build-up. This created more room for them on the flanks, where they could look to get in behind Rising’s full-backs before getting a cross off. 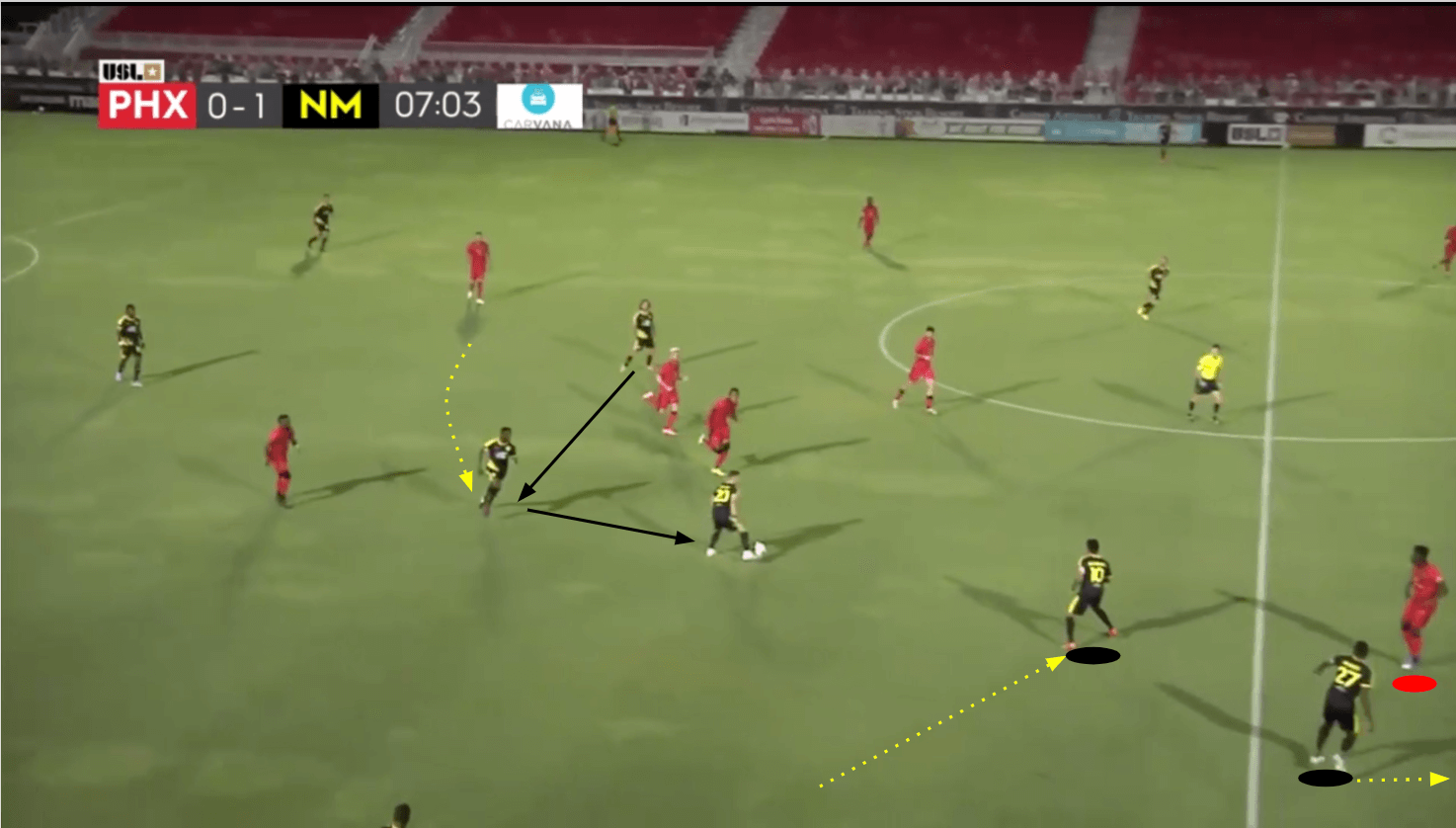 New Mexico had attracted the attention of all six attacking players. This meant that if they could progress forward, Rising’s back line would be exposed. They were able to take advantage of this exposure by creating a numerical advantage against Owusu-Ansah Kontor. Both Moreno and Parkes, marked with black, are directly in front of Kontor, who is marked with red. In this instance, Kontor had to decide what to do; in that split second of decision-making, New Mexico were able to get Parkes in behind Kontor and running into the space. Parkes’ driven cross on the ground was deflected out of bounds by the Rising defence, but Moreno was inches away from putting New Mexico up by two.

Later in the match, Joey Calistri was subbed on for Kontor, and Calistri ended up at right-back. This led to Moreno making his way to the left wing with New Mexico constantly feeding him 1v1 opportunities to attack Calistri and try to get in behind. 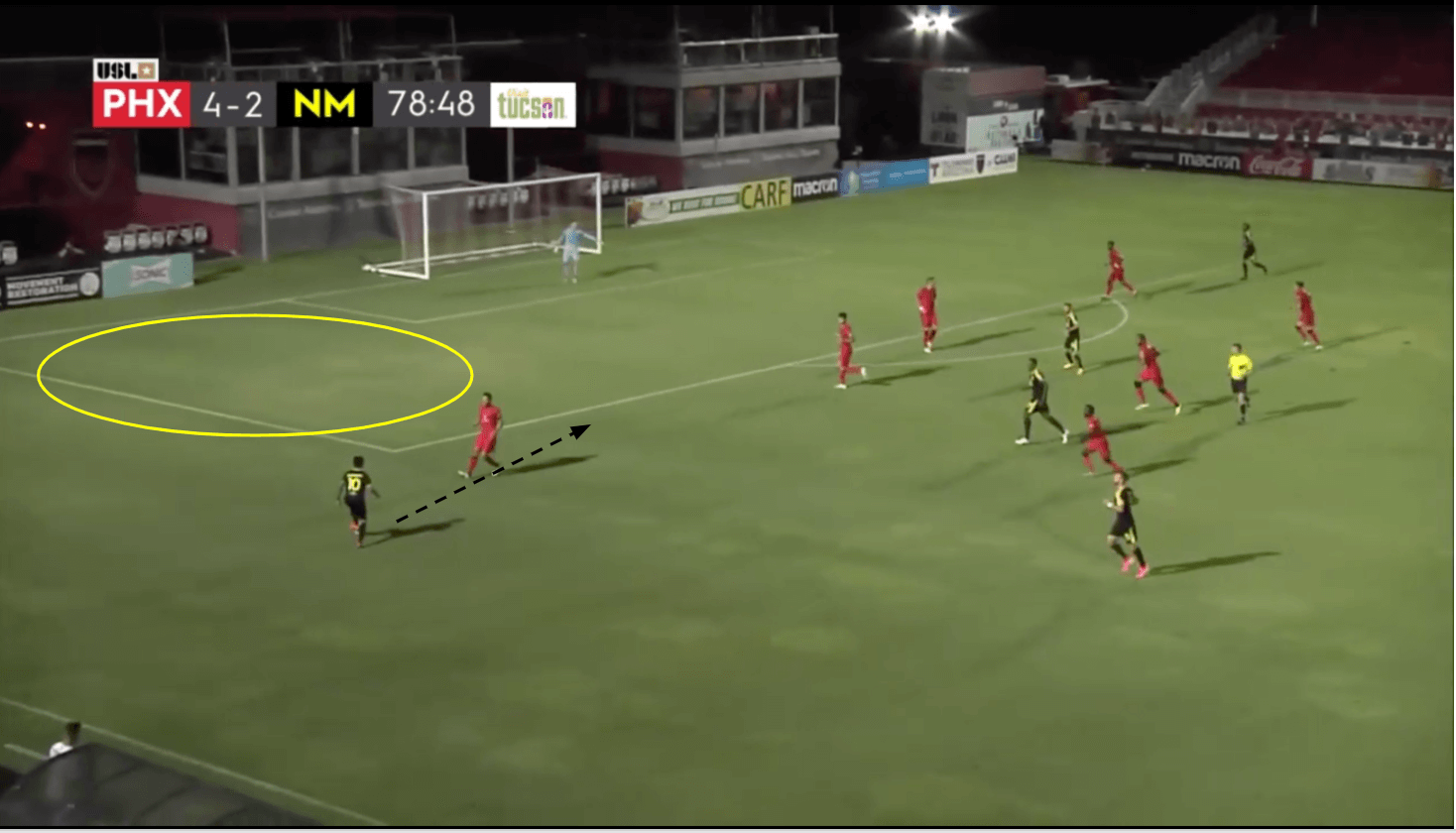 Multiple times, Moreno would receive the ball in this position. Again, New Mexico were able to draw Rising into the centre of the pitch before passing it out wide to some of their more skilled players. While the team’s structure had proceeded properly, Moreno was unable to take full advantage of the situation. In the image above, Calistri was setting up to force Moreno outside. There was a lot of space for Moreno to dribble into and attack, but multiple times he opted for feigning left and cutting into the middle of the pitch. Each time this happened, Solomon Asante was able to drop down and cover, preventing any real scoring threat from happening.

The Rising’s reputation in the USL is for their fluid football that forces opponents to play on their back foot. Despite going down a goal early, Phoenix looked to play their game consistently throughout the match, using a variety of rotations and long passes in order to keep opponents off-balance throughout the match. A prime example of that came in the first half, after Phoenix had already equalised. 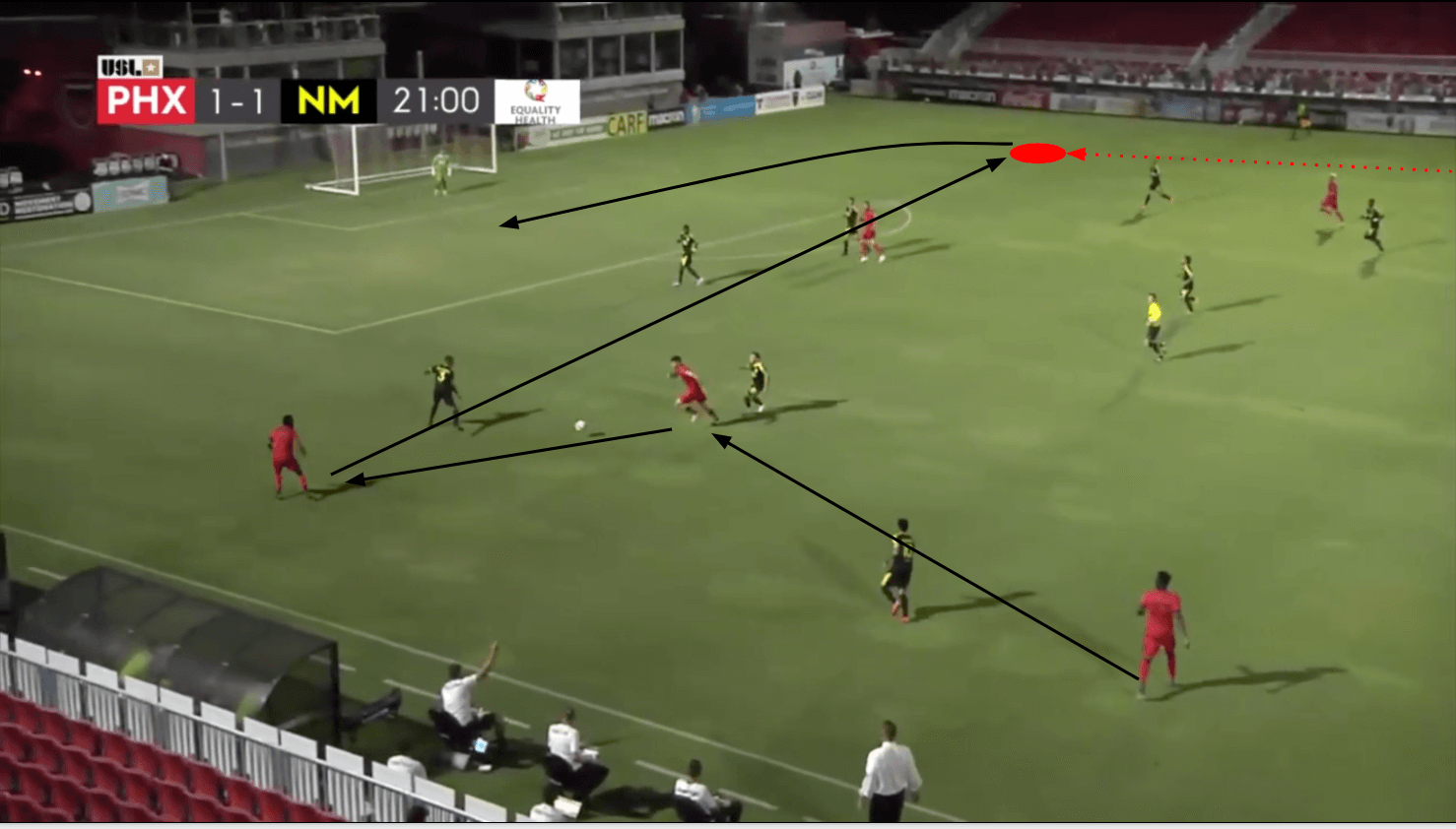 Kontor received a pass from the opposite half-space on the left flank. He quickly used his first touch to pass the ball to Bakero, who used his first touch to lay a pass off to Flemmings. Flemmings tried to deliver a cross in but it bounced through to the other flank, where Solomon Asante rushed forward to deliver a curling first time cross into the area. This quick succession of passes across multiple vertical lanes continually moved defenders, allowing for larger gaps to open up. Asante’s ball found Flemmings, who took a shot but was denied by a New Mexico defender. The ball deflected to Asante, who beat his defender 1v1 and drove a ball across the face of goal, finding the foot of  Rufat Dadashov, who buried the cross in the back of the net. Because of Rising’s speed of play, New Mexico never had a chance to properly organise their defence, leaving Dadashov essentially unmarked as the cross came in.

Seconds after New Mexico kicked the ball off following that goal, Rising again won the ball back in the centre of the pitch, and looked to use their free-flowing football to disorganise New Mexico’s defence. 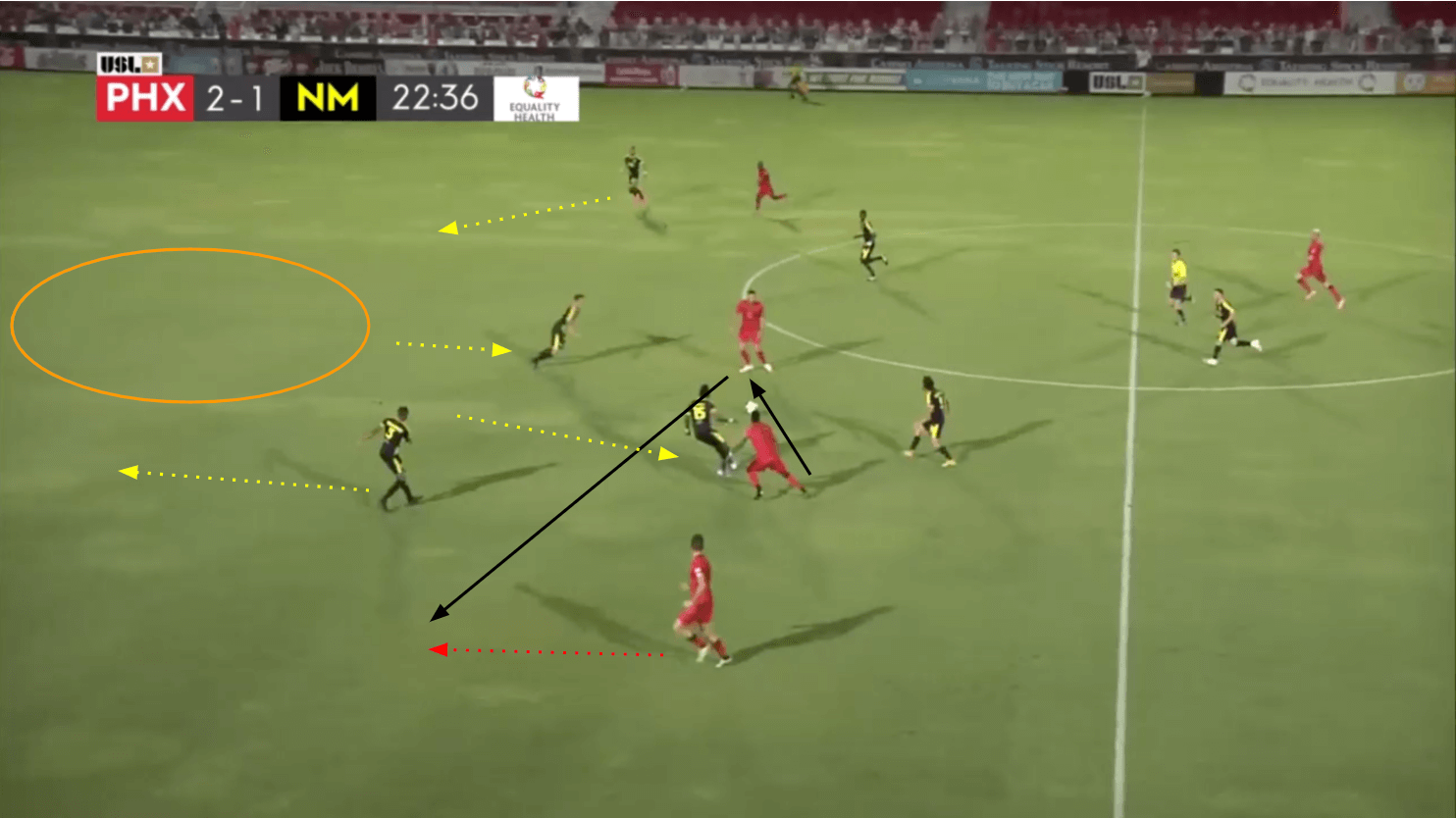 Again, Phoenix used a vertical pass to immediately put New Mexico under pressure. Flemmings and Dadashov combined to find Bakero open as the free man running into space. Because both of the New Mexico centre-backs had stepped up to pressure, their outside-backs had to pinch inside in order to protect the space they had vacated. As Bakero progressed up the pitch with the ball, New Mexico’s left-back had to close down the centre of the pitch. This allowed Asante to separate from him by taking a few steps backwards. Bakero was able to find Asante, who was able to get a shot off from his weaker left foot, which ultimately rolled to the goalkeeper. That being said, it was clear that New Mexico was rattled with all the shifting and covering that their defenders had to do. And as Rising had proven during the previous play, the longer this happens, the more likely defenders are to make mistakes and get punished for them.

Space in transition for Phoenix 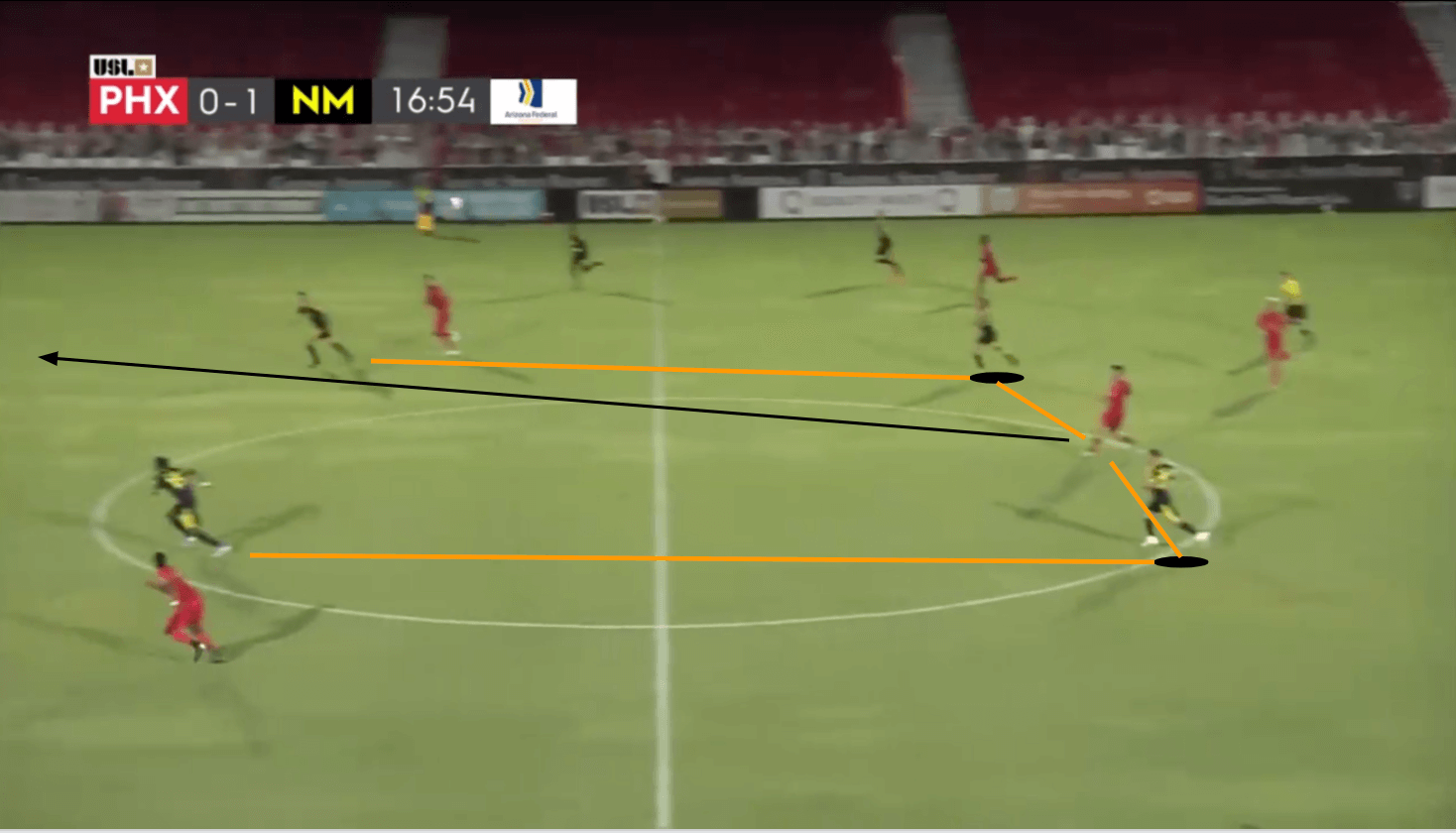 Phoenix’s first goal came about because of all the room that Rising had available to them upon winning the ball. In the image above, Bakero had just received a misplaced pass from a New Mexico player. New Mexico were attempting to proceed into Rising’s half, so their full-backs were sent forward to establish the width of the field. Phoenix will often leave Flemmings or Asante higher up the pitch, depending on which side the opponent is attempting to play down. In this instance, Flemmings was higher up as Bakero found the ball at his feet. Bakero’s first touch sent the ball in over the top, and Junior Flemmings did the rest, tying the game in the process. The large gap between defensive midfielders and central defenders meant that no one was able to pressure Bakero at all, and so he had a clear view of the pass he could make into space behind New Mexico’s back line.

Later in the match, with Phoenix up just one goal, they were again able to take advantage of the large amount of space that New Mexico allowed them to operate in. 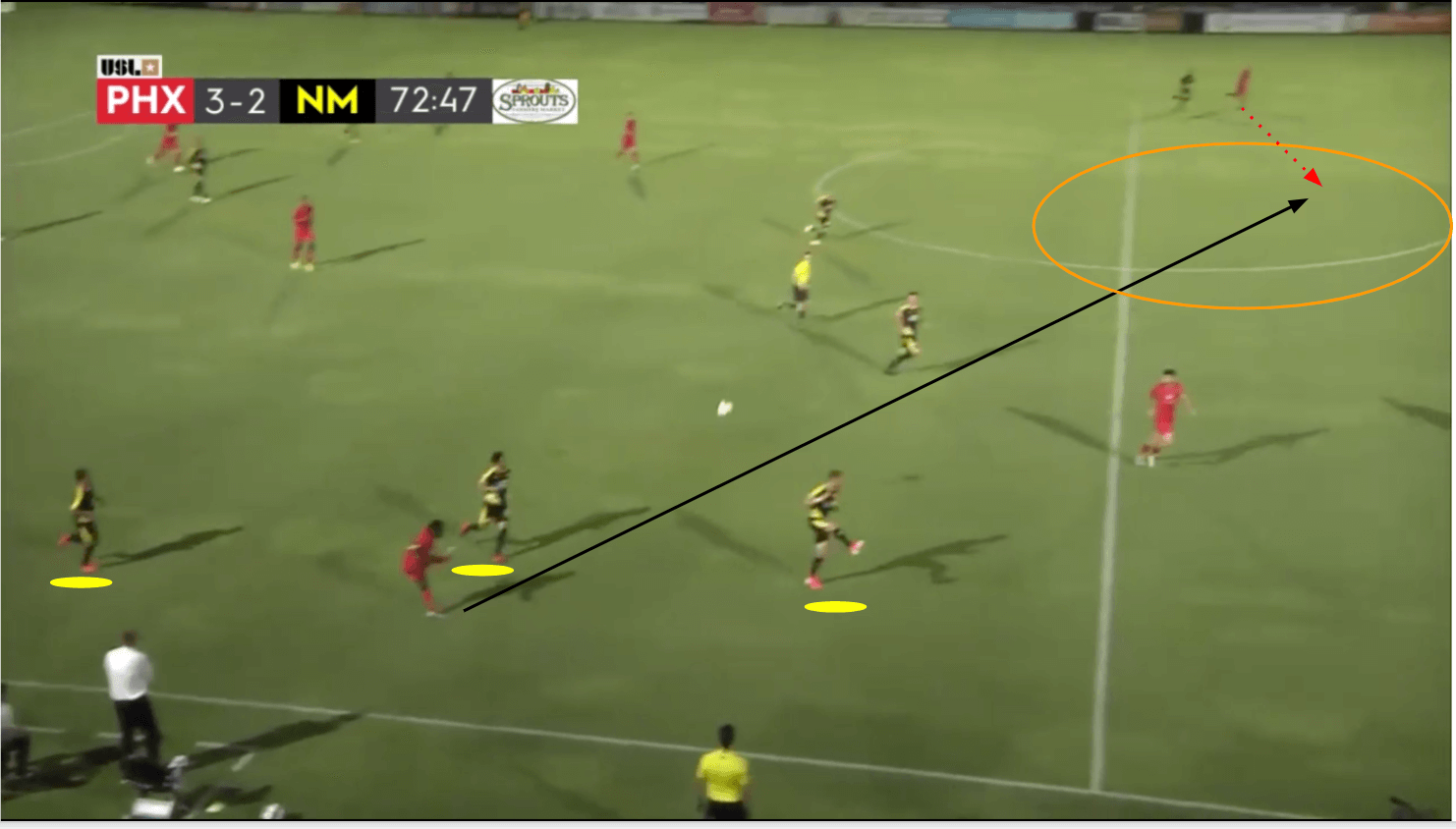 Solomon Asante had the ball at his feet after Calistri prevented a through-ball. Asante was allowed to dribble up the pitch until he arrived at the spot shown above. Not one of the three highlighted New Mexico players attempted to pressure him. This became an incredibly poor choice because behind them, their midfielders had allowed a large gap to again open up between them and their centre-backs. Asante’s pass into that space wasn’t a particularly good one, but because he had so much room, he essentially allowed Santi Moar to enter a foot race with his defender to see who could get to the ball first. Moar won that race and played a pass to Bakero, who whipped a low cross into the path of Junior Flemmings (again) as he registered his second goal of the evening.

New Mexico’s nightmare continued in the 85th minute when Bakero found Moar on the wing in his own half, just seconds after Phoenix had won the ball and successfully played through New Mexico’s first wave of counterpressing. New Mexico’s right-back provided way too much room for Moar, who used his first touch to go past the defender. 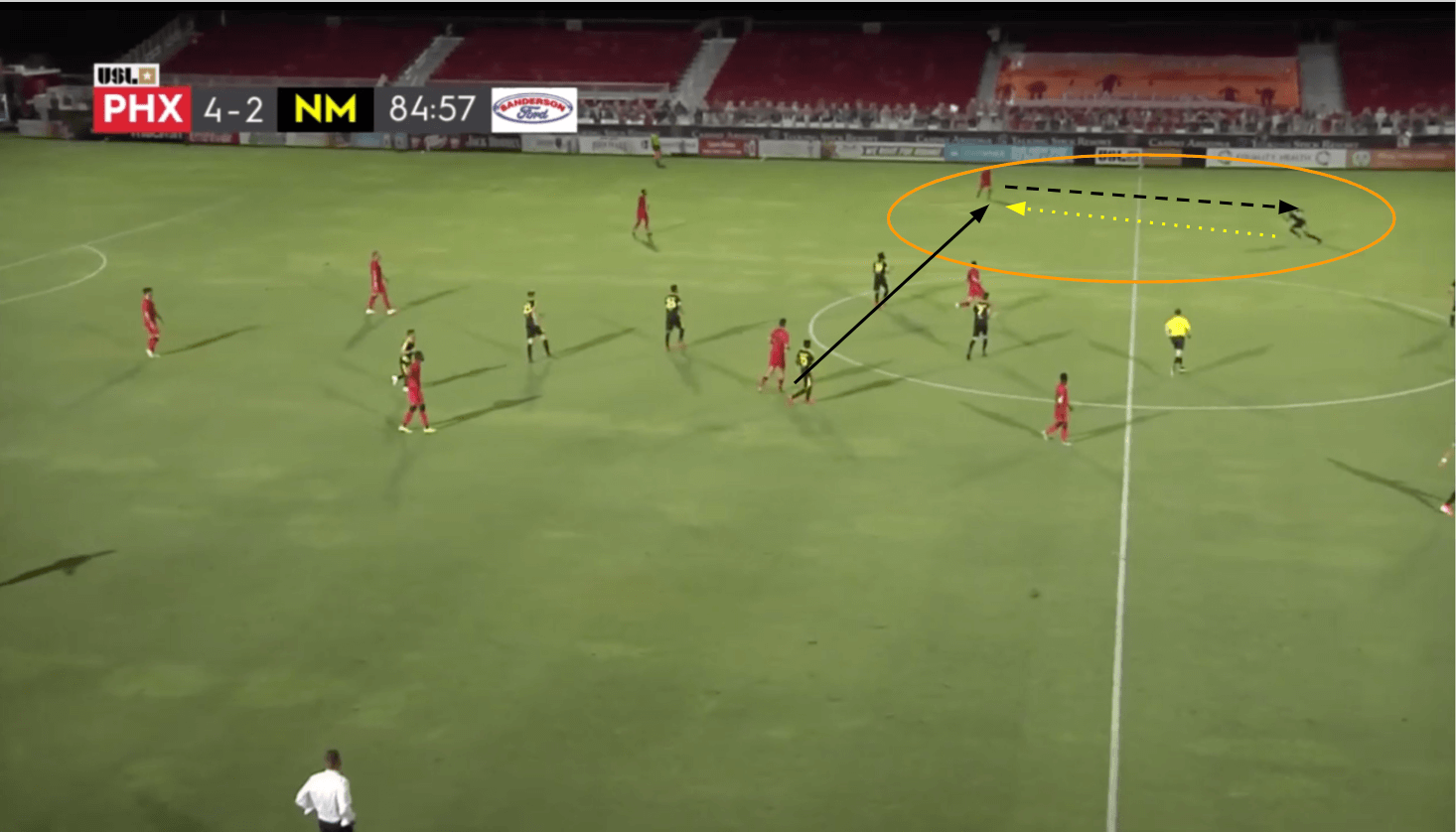 In the image above, the defender was arriving late to the challenge. While this horizontal ball likely seemed like a good time to press, Moar was too quick, taking his first touch into the large amount of space behind the defender. Moar then cut in centrally, drawing the attention of more New Mexico’s centre-backs in the process. This allowed Flemmings to find even more room for himself at the top of the penalty area. Flemmings did well to stay even with New Mexico’s last defender, meaning that when Moar played him through, all Flemmings had to do was control the pass and then blast it past the goalkeeper to complete his hat trick.

Phoenix are a very tough team to beat, especially when clubs have to come to Arizona and play in 100 degree heat. That being said, if a team allows Rising to have a lot of space in their transitions, they’re going to struggle to keep pace with the Phoenicians, as New Mexico demonstrated. Phoenix will look to continue their winning ways when they take on San Diego Loyal on Saturday evening. This will be a battle of the top two teams in USL’s Group B, and it should be an entertaining match. New Mexico United will look to rebound against Colorado Springs Switchback FC, who just lost to El Paso Locomotive on Saturday.