Phoenix Rising traveled to Las Vegas to take on Las Vegas Lights FC in their USL Championship match on Friday. Rising was playing in their third game in seven days, looking to pick up three points as they had done in the previous two matches. Early on, it appeared they would do just that; Rising had numerous opportunities that they were unable to capitalise on. Their inability to finish their chances ultimately led to a frustrating night, as Las Vegas was able to make a comeback and split the points with a 3-3 draw.

This tactical analysis will examine the tactics used by both Rick Schantz and Frank Yallop in their 3-3 draw. The analysis will explore how Phoenix used their back link in an attempt to draw out defenders, how they relied on their qualitative superiority of their wingers, and how Las Vegas attempted to disorganise the Rising defence through their passing.

Frank Yallop sent out Las Vegas in a 4-2-3-1 formation with Lalo Delgado in goal. Their two centre-backs Johnny Fenwick and Ramón Martín del Campo. The left-back on the evening was Jordan Murrell and their right-back was Mobi Fehr. The two holding midfielders were Seth Moses and José Carrera García; in front of them was Junior Sandoval, who was flanked by Raúl Mendiola on the right and Bryan de la Fuente on the left. Their starting striker for the evening was Rashawn Dally.

Rick Schantz made five changes from their 4-1 victory against LA Galaxy II on Wednesday; one of them was starting Eric Dick in goal. Rising kept their Barcelona-like 4-3-3 shape as Owusu-Ansah Kontoh started as the left-back, with Corey Whelen and A. J. Cochran as centre-backs, and Darnell King as the right-back. Kevon Lambert was the holding midfielder with Jon Bakero and Sam Stanton as the other two central midfielders. The front three consisted of Junior Flemmings on the left-wing, Solomon Asanté on the right-wing, and new signing Rufat Dadashov, who has spent time in the lower leagues of the Bundesliga, as the centre-forward.

A lot of times when Phoenix are in possession, the centre-backs are a bit hesitant to engage defending players. Instead of attracting defenders, they tend to distribute the ball before attracting pressure, thus creating a disadvantage for players higher up the pitch. This means midfielders have less space to operate in. It also means that they cannot gain a numerical advantage in the middle of the pitch. On Saturday evening, this was not the case for Phoenix. 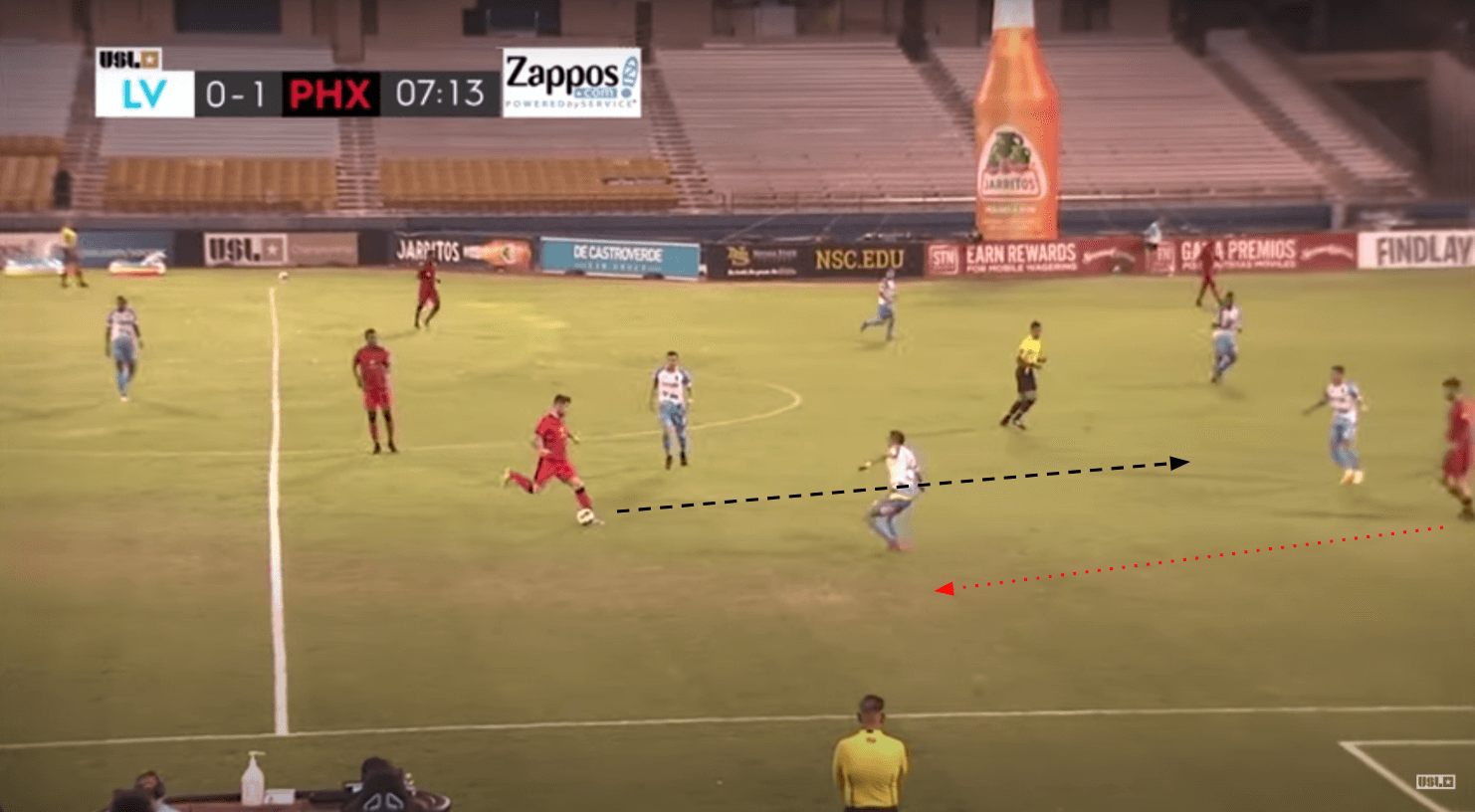 From early on in the match, the centre-backs were emboldened to attack defenders and make them commit to providing pressure. The whole point of this is to make it easier for the teammate who is about to receive the pass. In the image above, Corey Whelen dribbles past two opponents in order to engage a third. This meant the defender needed to step forward to defend Whelen. Unfortunately for Rising, Bakero’s instinct to rotate with Whelen (which is something Phoenix do consistently) meant that Whelen’s dribble was all for naught, as he attracted Bakero’s defender, but Bakero left the space up the pitch. While both Cochran and Whelen took opportunities to progress the ball, Rising’s midfielders didn’t seem on the same page as them, often playing passes backward or not being in a position to properly receive the ball.

While the centre-backs dribbling impact was somewhat negated, their distribution continued to create chances for their attackers. One example of this comes from a pass from Cochran. Unfortunately, due to the camera angle, we can’t truly appreciate the pass in all its glory. Cochran was able to beat a total of six Lights players with his pass. 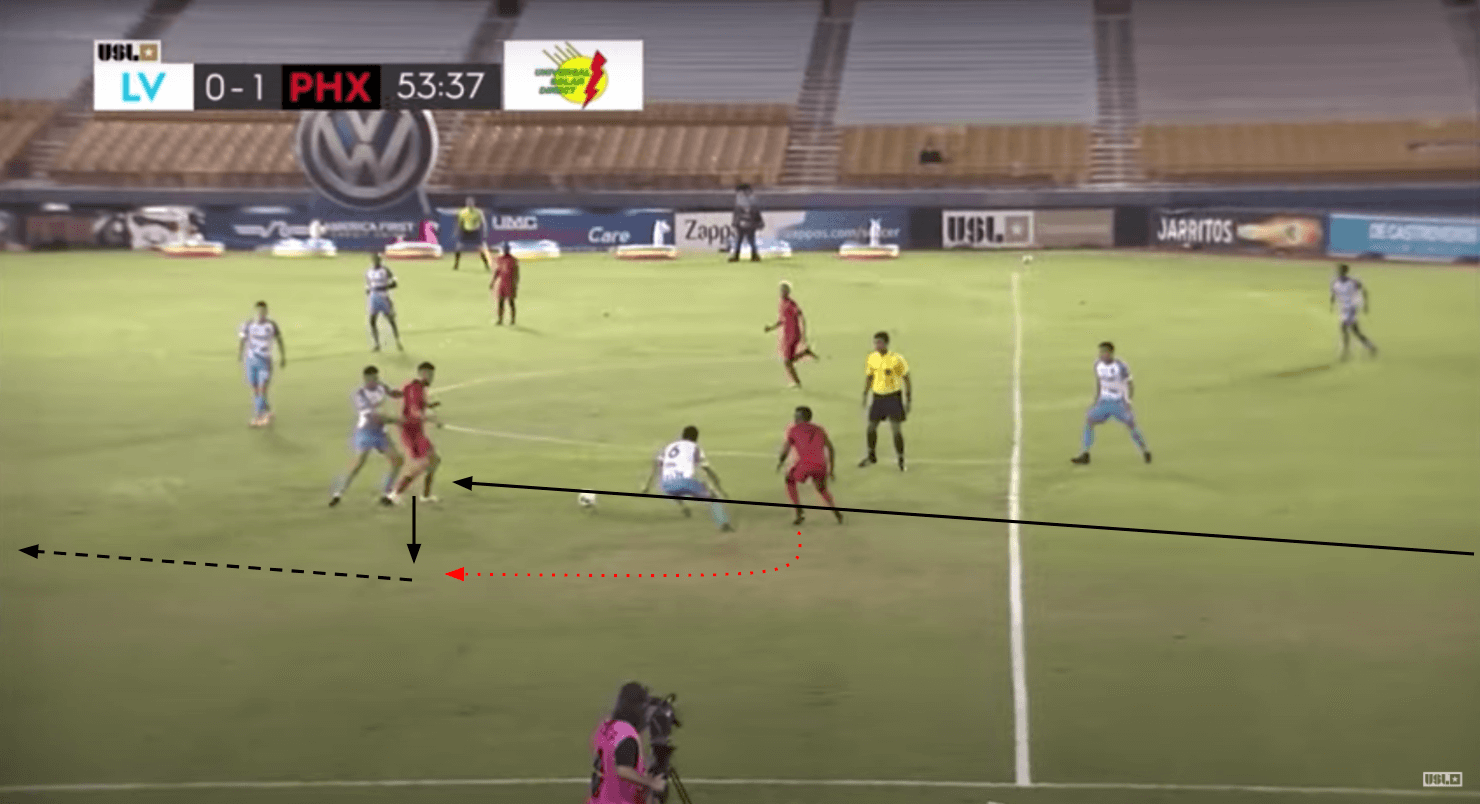 The diagonal pass to Dadashov passed a total of six opponents before arriving at Dadashov’s feet. Flemmings had made the smart decision to let the pass through, shifting his defender in the process. He then completed his third man run, where Dadashov found him with his first touch. Flemmings used his first touch to get past his defender, where he was able to run in on goal. Ultimately, Flemmings opted to pass instead of shoot, and Phoenix was unable to capitalise on the nice move started by Cochran.

Darnell King also looked to progress forward and take on defenders in the match. King’s participation wasn’t as unexpected as the centre-backs, but his contributions to attack made for a frustrating evening for Las Vegas. 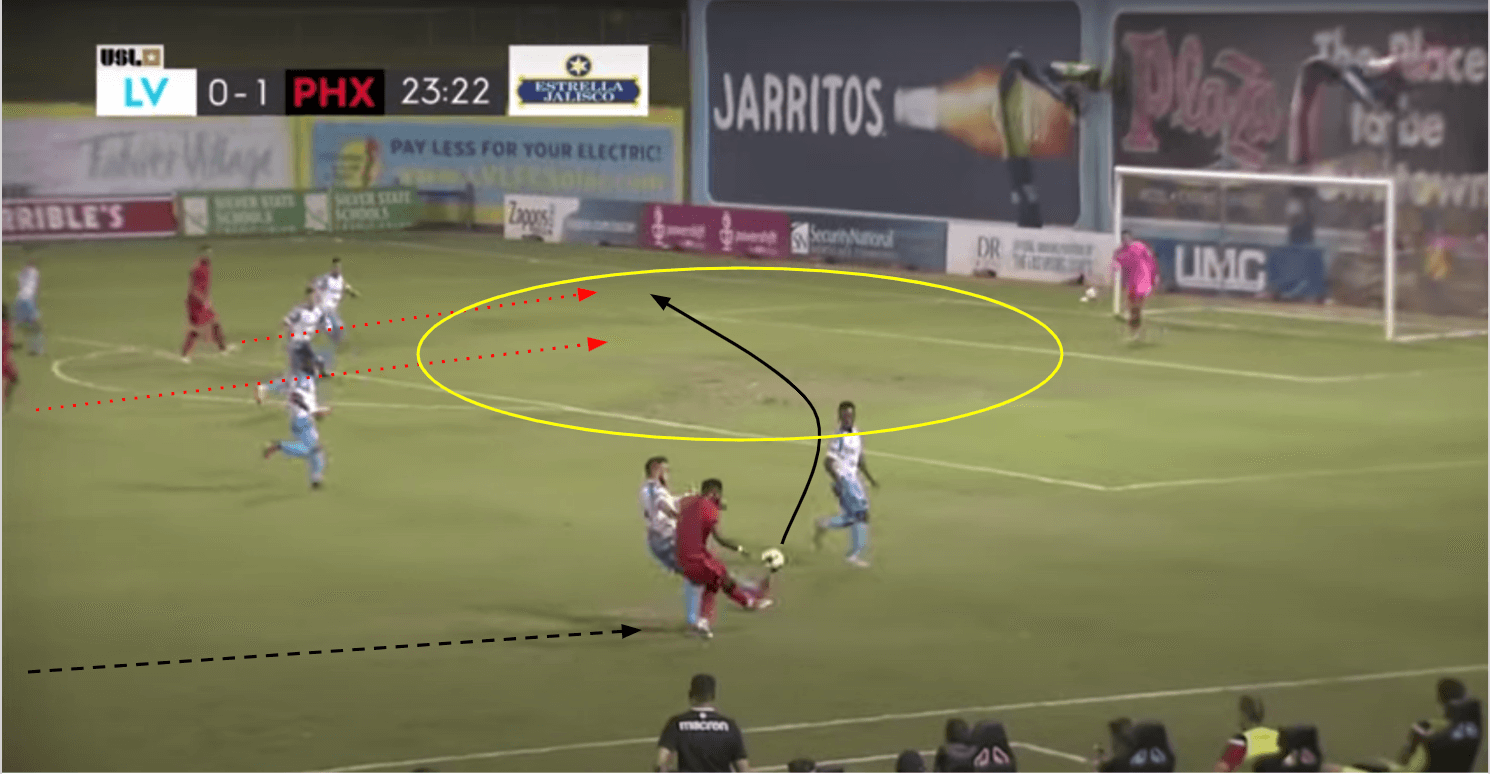 One example of this is shown above. King received the ball at midfield and dribbled forward at defenders. As shown in the image, King was essentially left alone by himself in this instance. Still, he attracted the attention of two defenders before executing a forward cross into space. These types of crosses are especially common from winger Solomon Asante, who plays on the right side with King. In this instance, King’s ball didn’t get played in behind defenders. That being said, if Phoenix can continue to get him moving up and down the right flank, it will free up Asante to be even more creative in the half-space, causing more headaches for defenders in the process. While King isn’t a finished product, his willingness to attack and the creativity with which he does will only grow as the season progresses, making Rising’s attack even more dangerous in the process.

Phoenix can be such a dangerous team to play against because of their style of play — they can attack you ruthlessly during the transition or find multiple ways to attack an opponent, even if the opponent gets into their defensive shape. Even if some small portion of their game plan has to be altered due to the size or condition of the pitch, Rising can still bury opponents with the quality of their wingers alone. The number of chances Solomon Asante and Junior Flemmings created on Saturday night should have seen Phoenix score at least six goals. 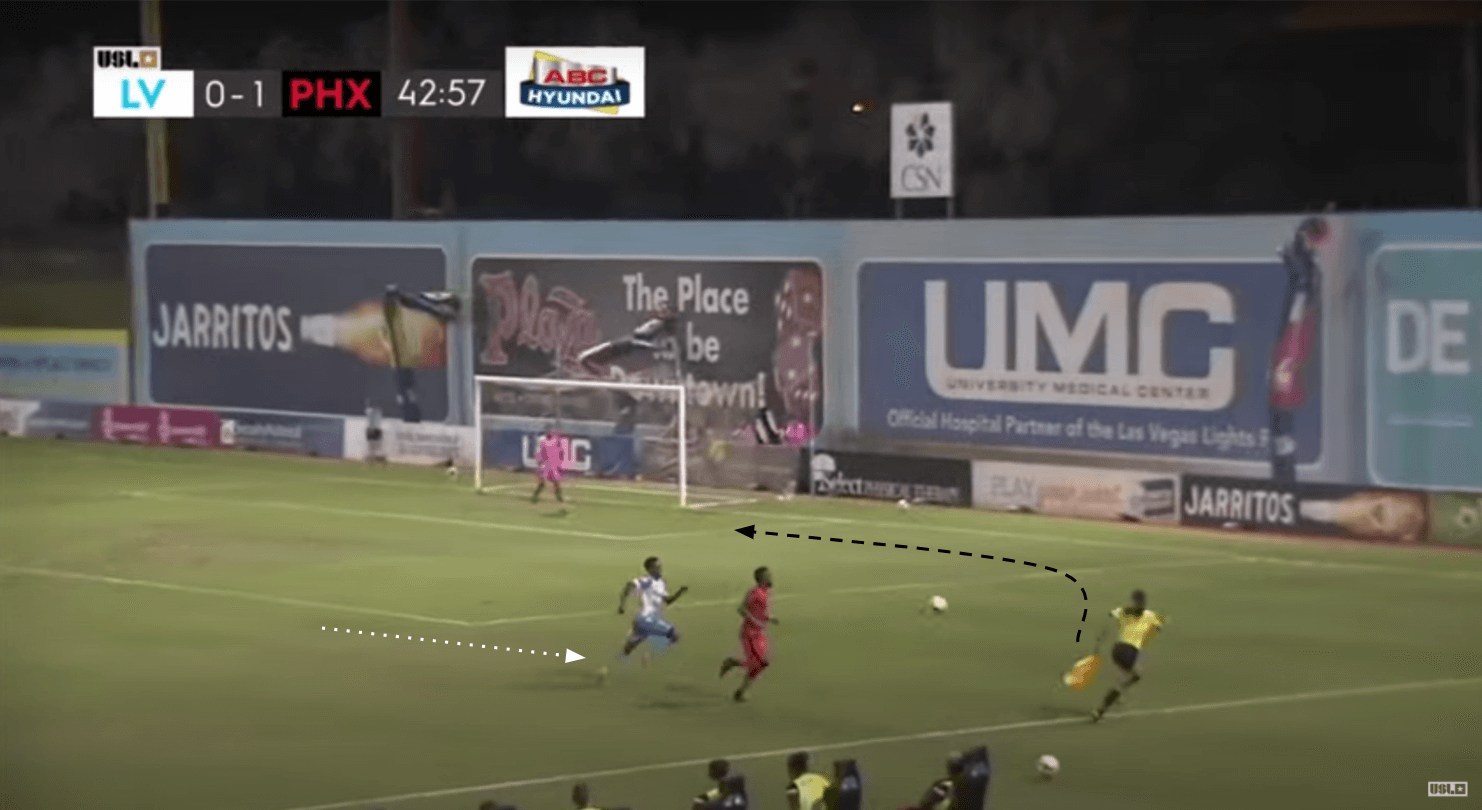 In the instance above, Flemmings combined with Asante on the right side with a simple 1-2 pass. Asante put Flemmings into a large amount of space with a single defender, who was already out of position, to beat. Flemmings’ change of pace was enough to get past the defender, but his final pass was unable to find a teammate, and it was instead deflected out of bounds. Solomon Asante was also able to use his individual quality to create opportunities for Phoenix, who were simply unable to capitalise on them. 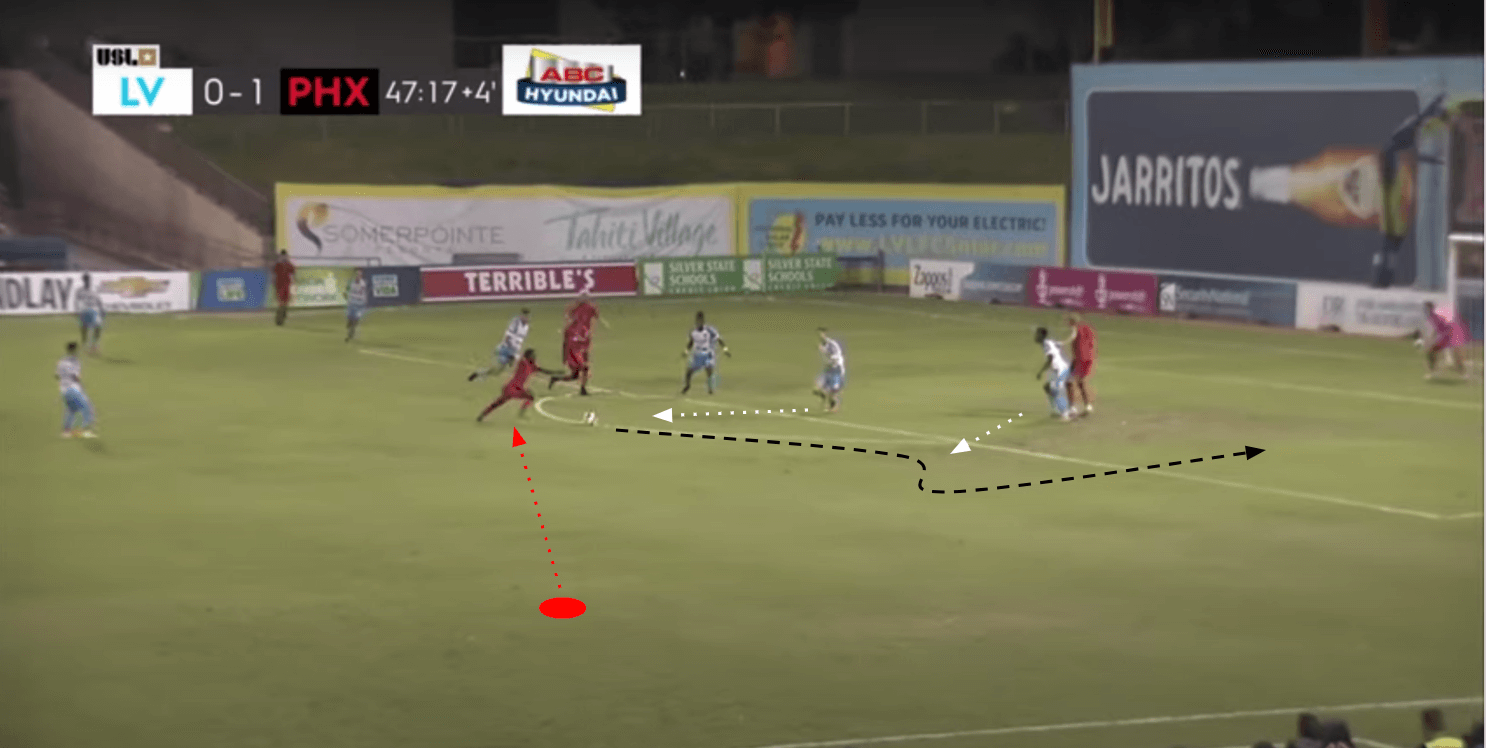 In the first half’s extra-time, Asante checked into the centre of the pitch from the right side of the field as his teammates progressed the ball up the left flank. Two quick horizontal passes saw the ball arrive at Asante’s feet with plenty of room between him and the back line. As Las Vegas stepped forward to challenge, Asante was able to dribble past the first and second defender who stepped up to challenge him. Asante’s small stature and speed mean that if you’re running at him in order to stop him, he has every advantage to go right by you (which he did). While his shot on target wasn’t perfect, the goalkeeper deflected it into the path of Dadashov, who was able to tap the ball in, albeit from an offside position.

The best example of the qualitative advantage Rising have with Junior Flemmings was demonstrated on their second goal of the evening. Off of a throw-in deep in their own half, Dadashov flicked a ball towards Flemmings. 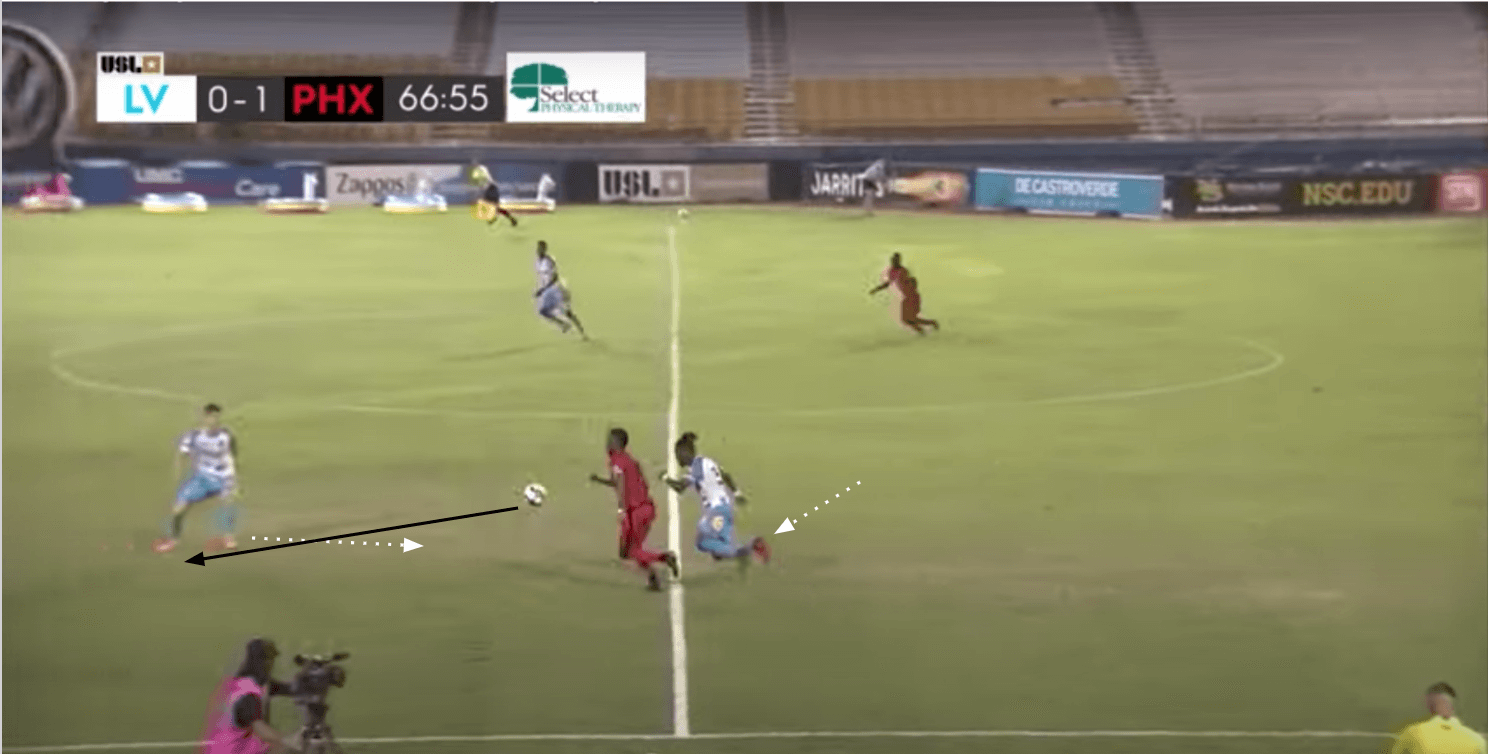 Despite being marked by a man both in front of and behind him, Flemmings was able to position himself and take advantage of the man in front’s poor positioning. This allowed Flemmings to turn outside and ‘seal off’ his defender. The second defender stepped up to pressure as the ball was still bouncing, and Flemmings just poked it past him into the large amount of space behind. From there, a simple turn inwards eliminated any chance of a defender getting goal-side of him, and Flemmings chipped the keeper, giving Rising the 2-0 lead.

Las Vegas Lights FC haven’t produced the greatest results this season. While they were able to claw their way back into the match and earn a point, two of their goals came off of deflections, and their final one came off a missed header by a Rising defender. When Las Vegas was most successful in attacking Rising was when they were able to move or eliminate defenders with their passing. 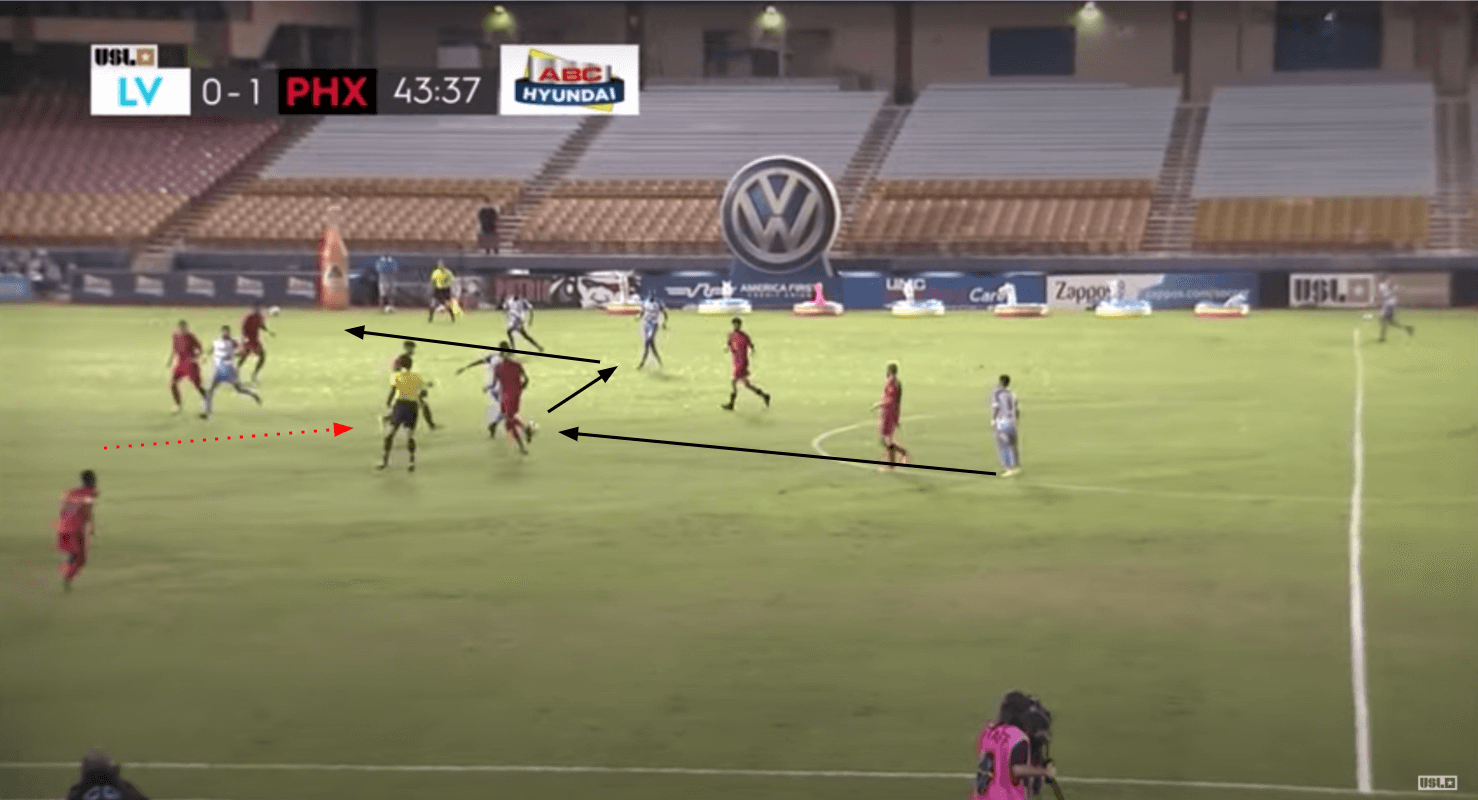 The image above started with a diagonal ball that eliminated five Rising players from play. Carrera-Garcia received the ball and actually turned backwards, creating space between himself and the Rising defender. His vertical pass to his teammate drew the attention of Whelen, who stepped up from Rising’s back line. A large amount of space opened up for Las Vegas to exploit, but instead they went down the right flank. Rising’s back line had to compact in order to eliminate the space, giving Las Vegas room on the right to play a through ball before delivering a back cross into the box. Chester received the ball right outside the six-yard box, but was unable to turn and shoot and was forced to play backwards. While this movement worked for Las Vegas, their end results were often disappointing and unsuccessful.

Another way in which Las Vegas looked to attack was through switching the field and therefore the point of attack quickly. This caused the Rising defence to shift quickly and adapt, opening up space in the process. 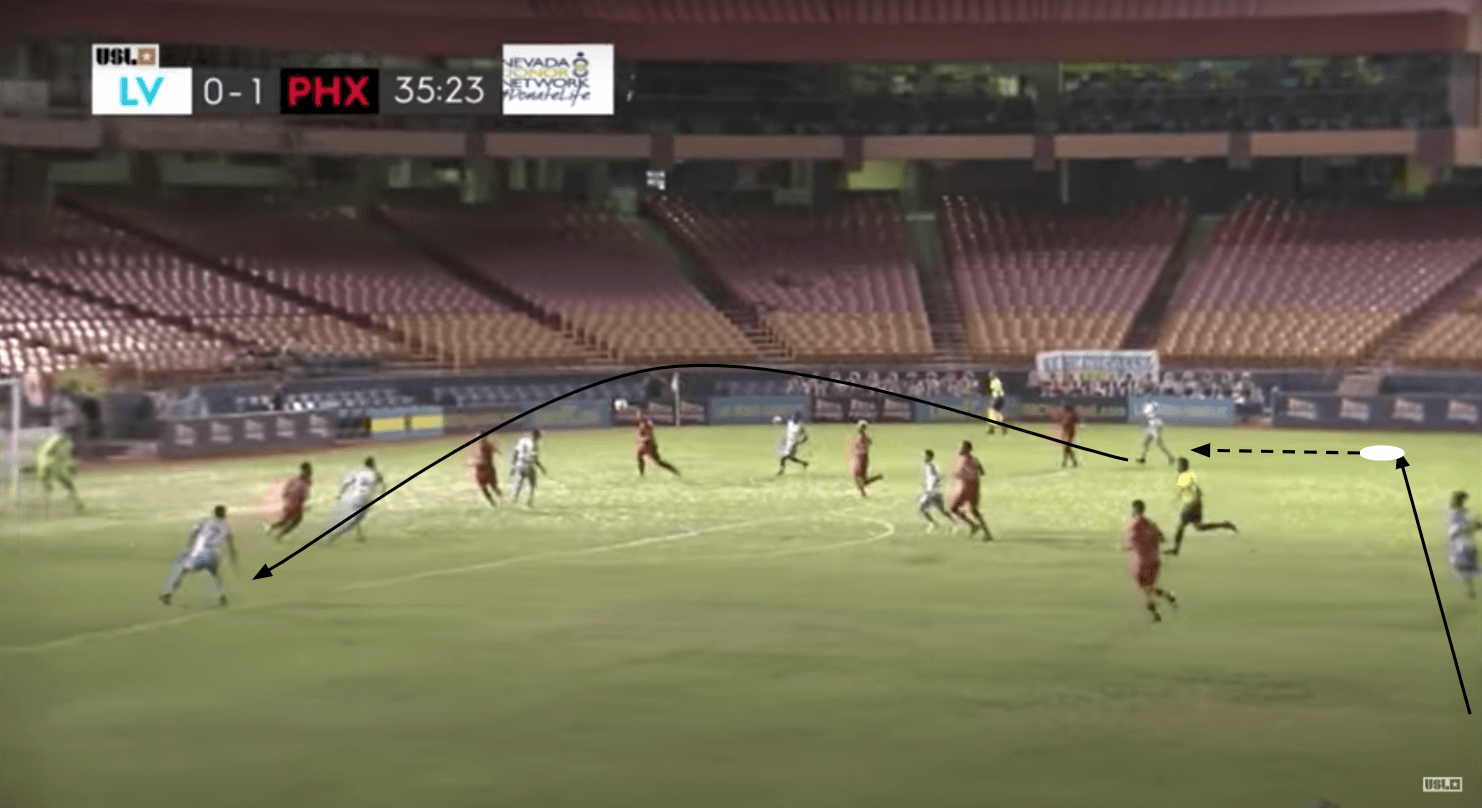 As shown above, Seth Moses played a ball to the right flank, where Mobi Fehr had room to receive and dribble. This long ball caused Phoenix’s defence to shift over to the left side of the pitch. Fehr progressed up the pitch, allowing Phoenix to shift. As soon as they were in position, Fehr sent a long cross to the back post, where Junior Sandoval was left open on the back post. Darnell King was unable to cover him because Las Vegas had flooded the box with runners, leaving him with an open shot on target. Luckily for Phoenix, Sandoval sent the ball over the top of the net, unable to capitalise on the time and space made available for him.

While the Lights were able to claw their way back into the match, Rising and their supporters will certainly feel like they gave away two points. The draw means that Las Vegas earned their fifth point on the season, while Phoenix earned their 20th. Phoenix still sits atop Group B in the USL, although Orange County SC is only six points behind with three games in-hand. Rising’s next match comes against Reno 1868, who currently sit atop Group A. Las Vegas have a quick turn around with a match against Orange County on Tuesday in Las Vegas.