Waasland-Beveren were perhaps fortunate to even be playing first division football in Belgium when the league was brought to an abrupt end. It took countless meetings with officials before the league was extended to 18 teams and they were allowed to remain, even though they finished bottom of the shorter 2019/20 season.

Despite surprising in their first Pro League game of the season, they appeared to be back to their form of last year when they were dismantled by winless Zulte Waregem 4-1. Zulte, who have former EPL and EFL striker Saido Berahino in their side, were comfortably the better side as they got their first points of the season. 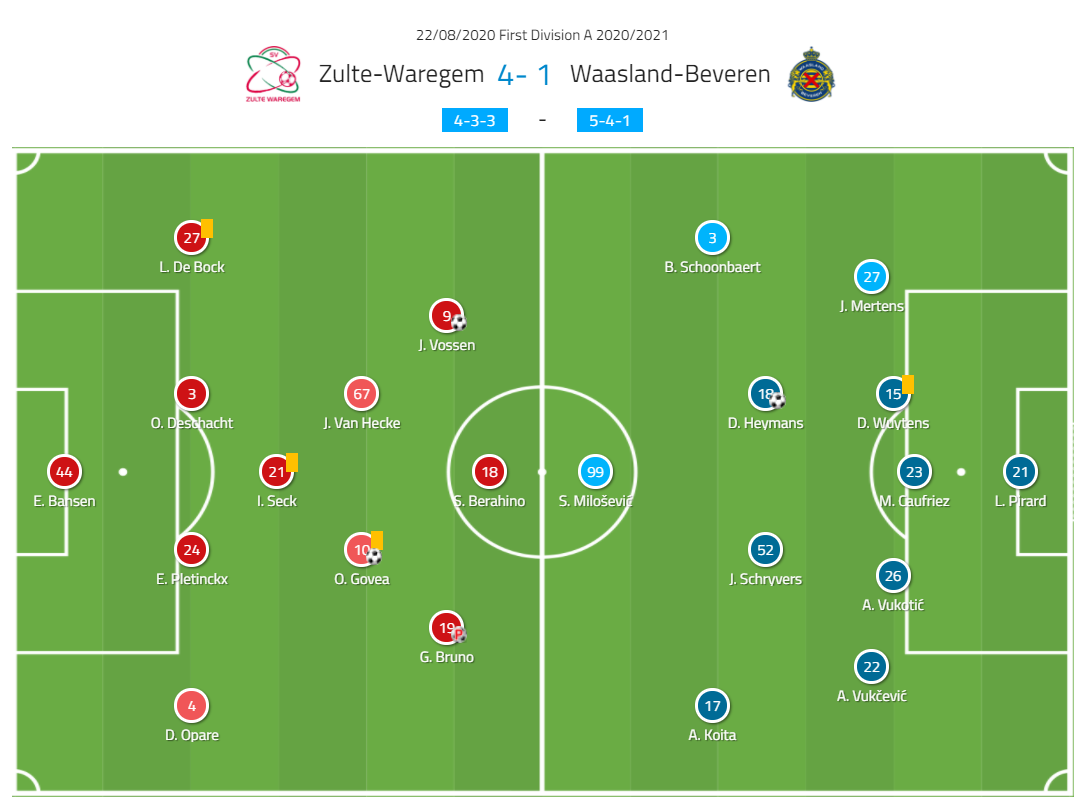 Zulte coach Francky Dury went for a 4-3-3 formation, with the young German goalkeeper Eike Bansen between the posts. In front of him were the centre-back pairing of exciting young talent Ewoud Pletinckx and experienced Olivier Deschacht, with Daniel Opare at right-back and Laurens De Bock at left-back. Ibrahima Seck was the deeper of the three central midfielders, with Jannes Van Hecke and Omar Govea playing further forward. Gianni Bruno, Jelle Vossen, and Saido Berahino were the versatile front three.

Beveren, on the other hand, went for a more defensive 5-4-1, with Lucas Pirard in goal and Aleksander Vukotic, Dries Wuytens, and Maximiliano Caufriez as the three centre-backs. Youngster Jenthe Mertens was at right-back, while Andrija Vukcevic was the left-back. Daan Heymans and Jur Schryvers were the midfield pair, flanked on the right by Brendan Schoonbaert and on the left by Aboubakary Koita. Stefan Milosevic was the lone striker.

The majority of times we see a 4-1 scoreline, we presume that one side was completely dominant in the game, however, on some occasions, it may be that they only had four chances and were more clinical. This game, however, was the former. Zulte were dominant in pretty much every piece of statistical data Wyscout produced from the game. What was most impressive was their xG performance, in which, across the game, they actually overachieved, scoring four goals, with a 3.11 xG.

In the first half, the xG for Zulte was down at 0.41, but in the second half this shot up to 2.70. Their first-half possession was up at 61%. In the first half, it was clear that Zulte wanted to get their full-backs involved in pushing Beveren back. The front three were mobile, with each being able to play anywhere across the top line. While Berahino mainly stuck to the central areas, his willingness to run the channels gave Zulte options in trying to get in behind their opponents.

While the three were willing runners, they also liked to operate slightly more centrally to open up space out wide for central midfielders or full-backs to move into. When we look at the first goal, we see how effective this is. Zulte have just won the ball back from pressing high, which we will discuss in the next section. Bruno receives the ball out wide and moves inside, opening up the outside for central midfielder Van Hecke to move into. Fellow central midfielder Govea has also opened up space on the edge of the box by moving deeper into the area. 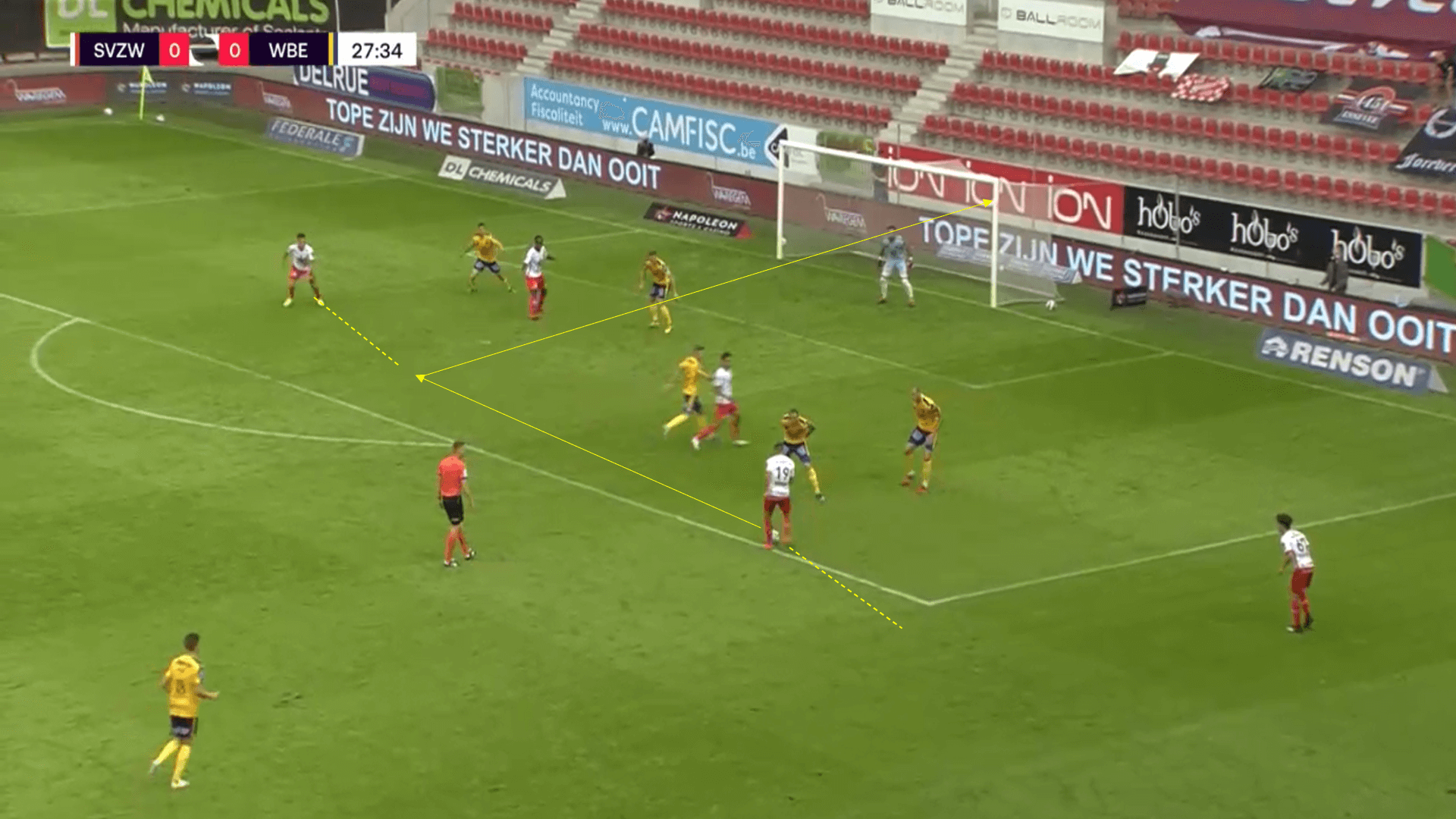 What follows is a simple move in which Bruno feeds Vossen, who is capable with either foot, making him very effective coming off the flank. He is able to exploit the space created by the other Zulte players and, as Beveren’s central midfielders are tracking their runners, he is easily able to put the side one goal up.

Bruno, Vossen, and Berahino all being able to come out of their positions and switch meant Zulte had a very flexible front three, which was able to open up space for the midfield and full-backs. They would have been disappointed that, despite bossing possession, they were unable to create more clear-cut chances in the first half from this, as their first half xG indicated.

Beveren really struggled to get any attacking moves going against a pressing Zulte side. According to Wyscout’s pressing intensity measurement, Zulte allowed Beveren only 4.9 passes per possession across the 90 minutes. This was consistent in both the first and second halves of the match.

We see not even a minute in, when the keeper has the ball, that Zulte’s front three have been told to deny Beveren any chances of playing out from the back, instead trying to force them into playing the ball long. This press in the first three minutes of the match had won the ball back for the home side every single time, and early on they were forcing Beveren into areas where they felt they could win the ball back. 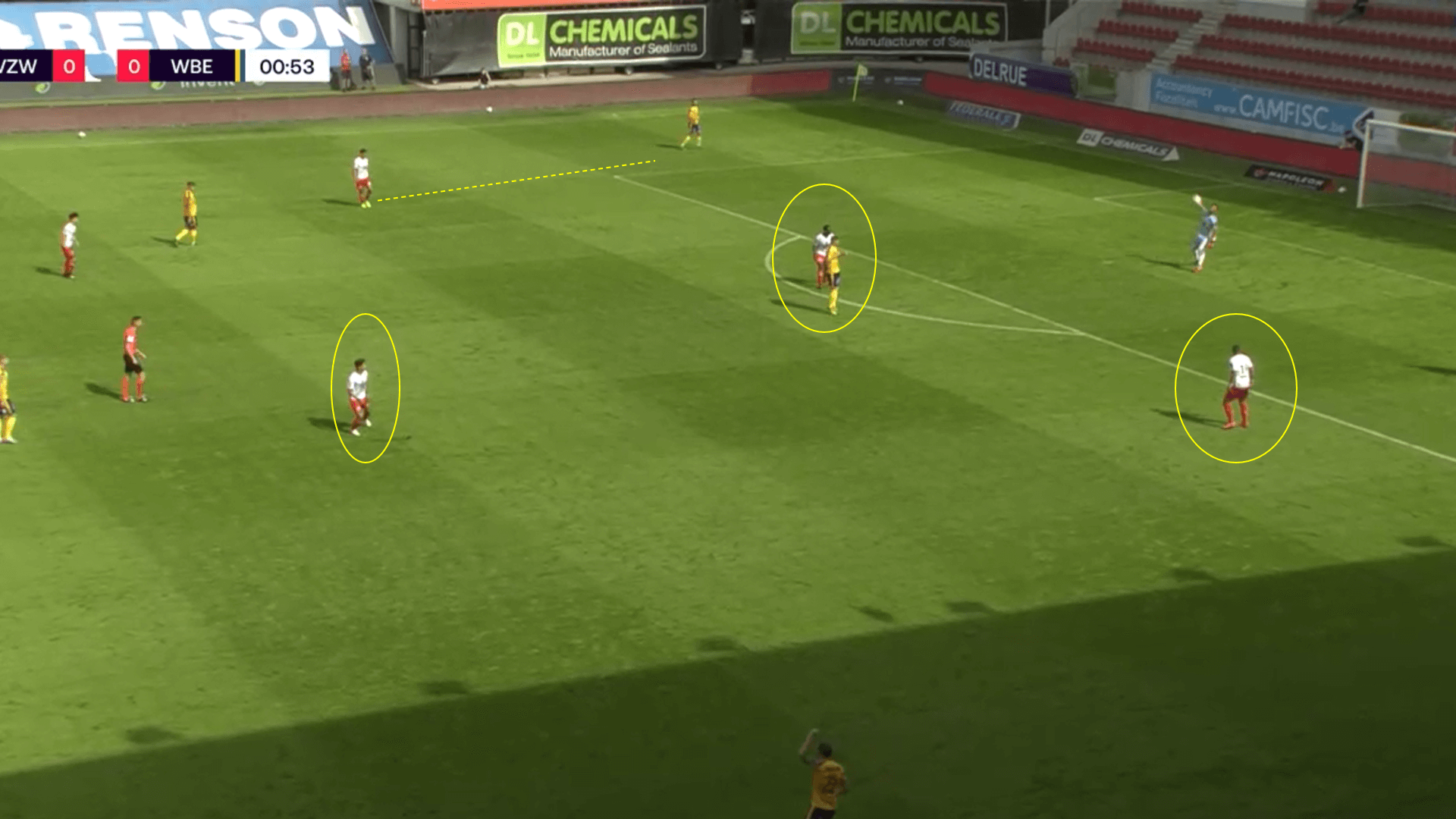 Opare and De Bock were aggressive when it came to being part of the press. With the front three pushing to deny the pass, these two were expected to then push onto the wide men to disrupt that option as well. We see below how far De Bock has pushed up for a goal kick, ending up closer to the opposition box than the halfway line. 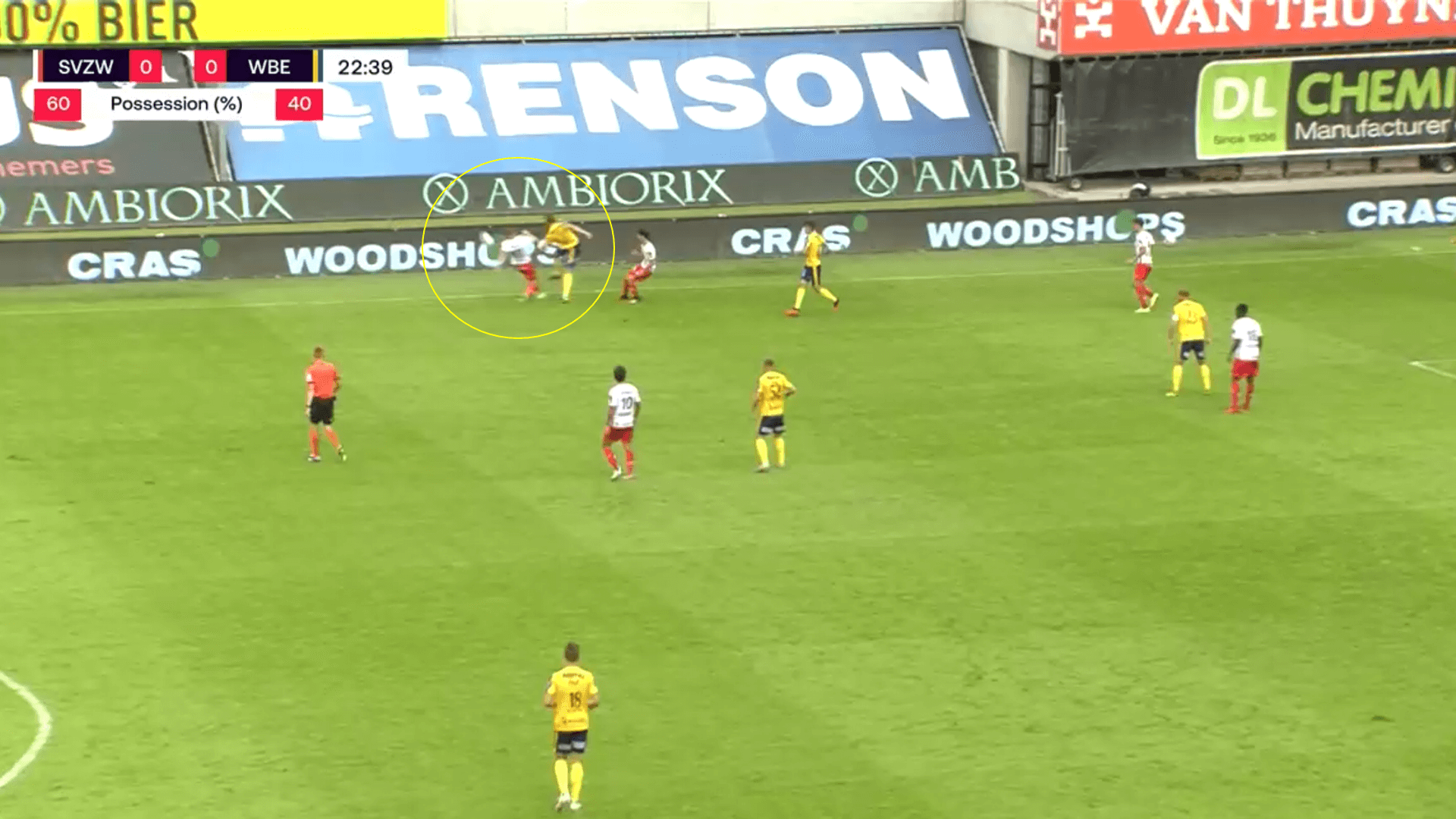 In the first half especially, this was done to great effect, with Opare especially winning the ball back plenty of times. The Ghanaian right-back won 52% of his 23 duels, many of which were from pressing situations.

With the press disrupting their play, Beveren really struggled with their attacking flow. They wanted to play out from the back, as they didn’t have the aerial presence up top to warrant going long from the back.

In terms of their own press, they didn’t do it with the same intensity as Zulte, allowing the home side to play out, often under little or no pressure. Plenty of corners in the first half were cleared, but, because Beveren did not leave anyone forward, it allowed a consistent flow of pressure. In the below image, we see that Pletinckx was able to drive the ball up to the halfway line without any pressure, despite there being enough Beveren players to put him under some distress. With both full-backs so high up the pitch, a more intense press from the away side could have created dangerous opportunities for them. 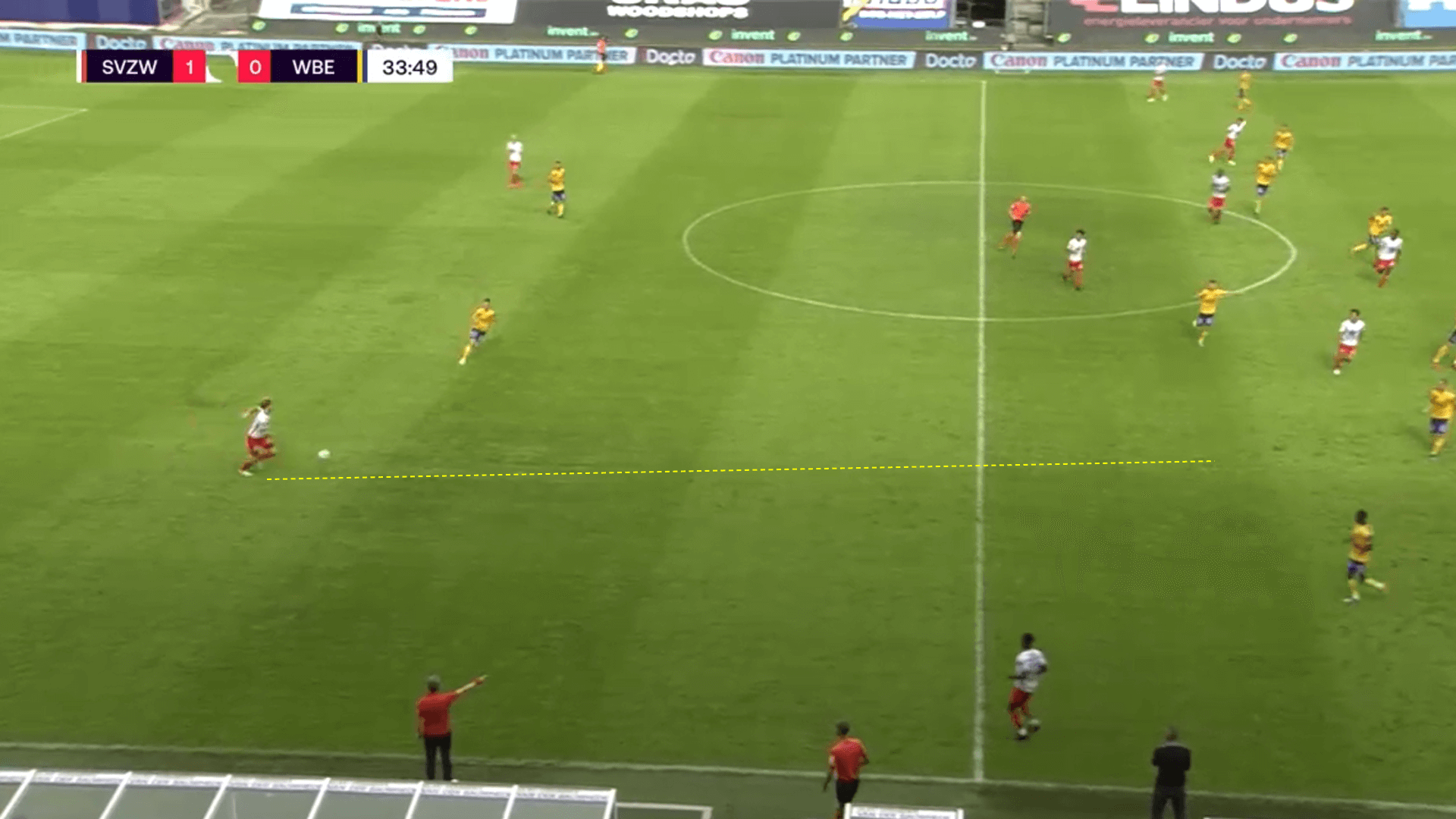 Instead, they allowed the centre-back to easily get the ball and find a pass between the midfield and defence. Being able to play between the lines of the away side really helped Zulte to dominate the game. Furthermore, it meant that Beveren were not able to take advantage of how high the full-backs were pushing up. In the image above, we see that, if they won the ball back higher up the field, they could have had a three-on-two break. Instead, as we see below, they end up being on the back foot. 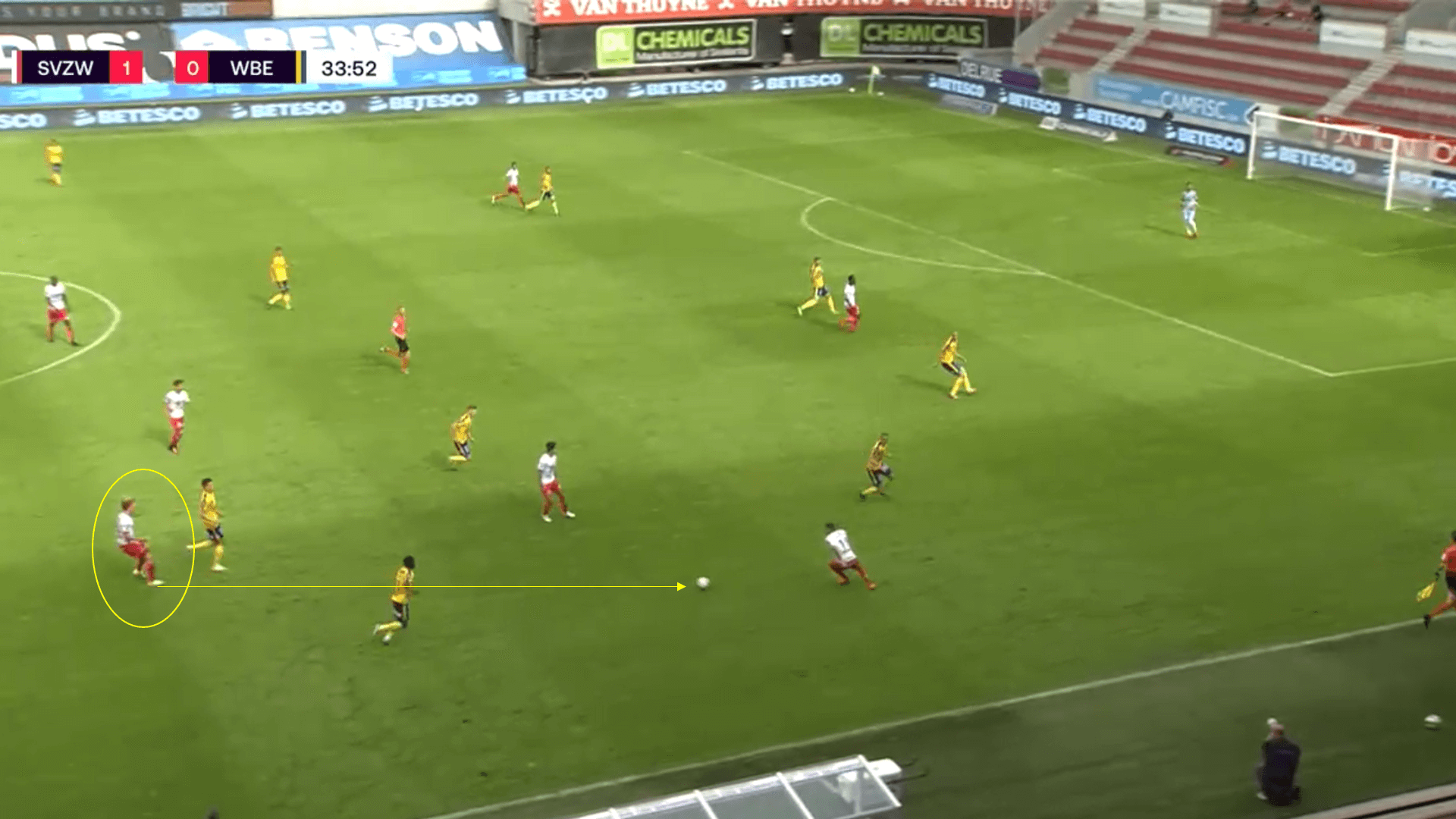 Beveren will certainly be disappointed in their inability to deal with the Zulte press, or to effectively put pressure on the home side when in possession, to take advantage of their tactics. When we look at the pressing intensity data, this backs up this lack of intensity in pressing. Zulte were allowed to average 14.1 passes per possession, with a 22.3 average in the first half alone.

From 1-0 at half time to 4-1 by the end, you would expect both sides to have made adjustments that led to this scoreline. Going 2-0 down early in the second half forced Beveren to chase the game more, in order to get themselves back into it. This did see a shift for them in terms of pressing, with the average passes per possession for Zulte going down from the 22.3 in the first half to 10, which is quite a drastic shift.

Below we see that, compared to the first half, they are doing their pressing higher up the pitch, forcing the home side to be a bit more direct. Like Beveren, Zulte don’t really have strikers who excel when it comes to aerial duels. If they are forced to go long from goal kicks, they like to look for Seck in the midfield to use his height to win headers. Seck is deeper when they are in possession. He is not getting forward to win these duels, and thus Beveren would have been happy to force Zulte into this more direct style of play. 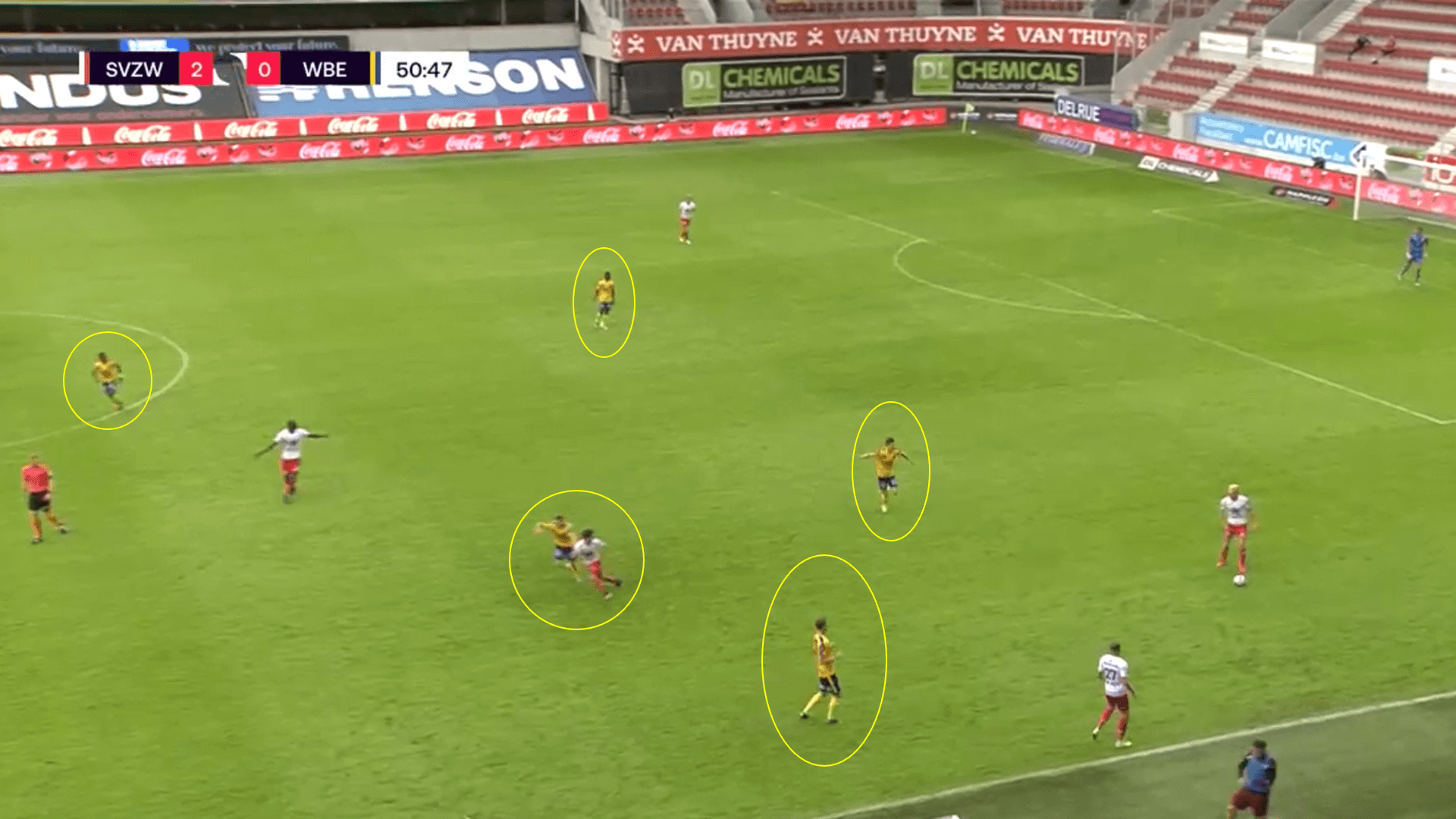 While Beveren increased their pressing, Zulte didn’t let up either, only allowing 4.9 passes per possession on average in the second half. Furthermore, the speed of the ball movement and the intensity of their passes began to increase. Their pass accuracy rate dropped from 86% to 82%, but there appeared to be greater risk involved than in the first half.

Tactically, Bruno began to operate as an inside forward or second striker, alongside Berahino, putting more pressure on the defence, and opening up even more space on the right-hand side for Opare and the central players. However, he would also appear further wide, making it harder for Beveren to mark him. This was similar for all the front three, as we see from the still below. 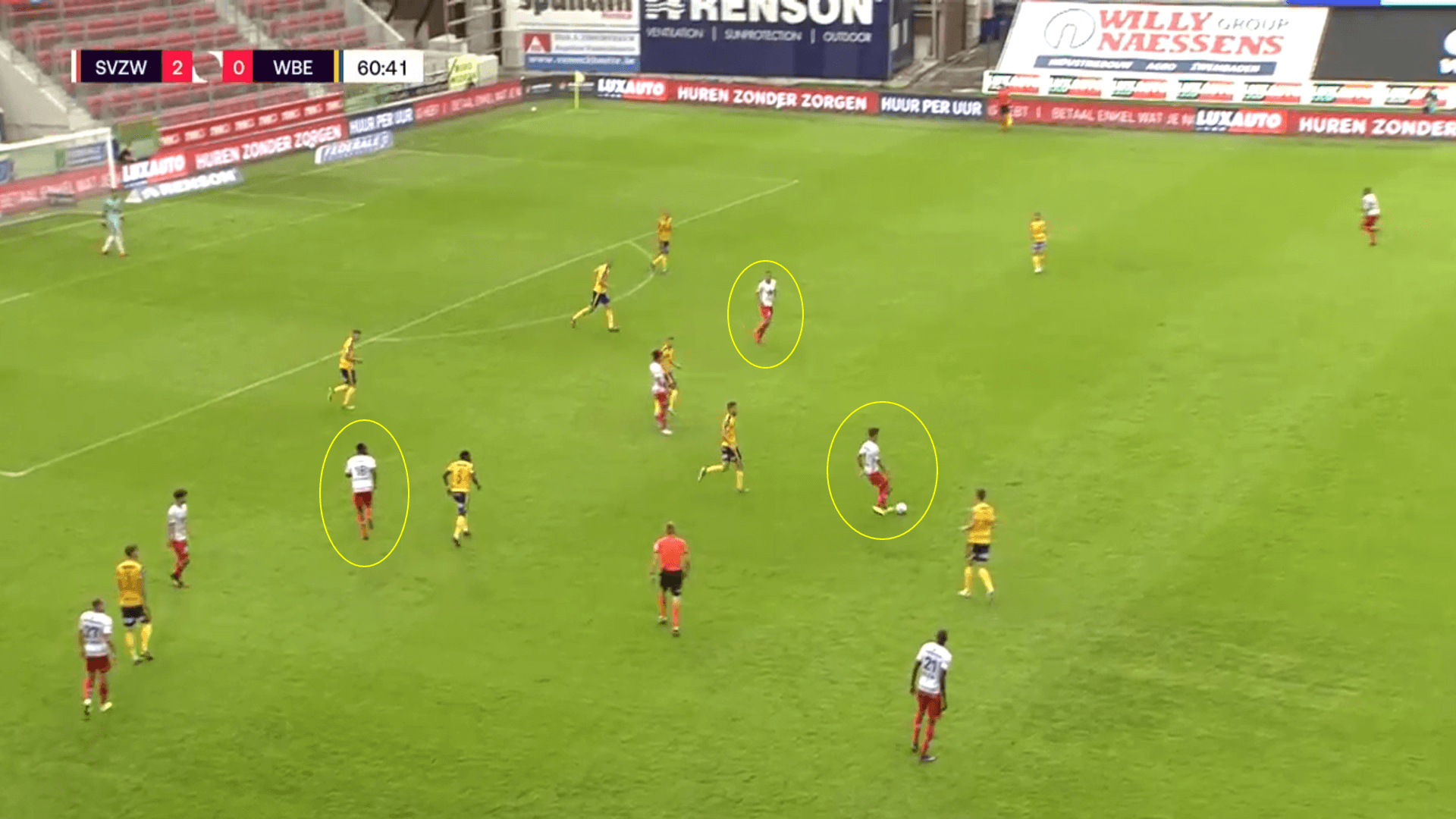 All three of the front men for Zulte have been highlighted to show how they operated in various positions across the frontline. We also see how much space there is for Opare, and how they have continued to push him forward in the second half.

This was how the third goal was created. Bruno, as we see below, is next to Berahino in the striking position, which has opened up plenty of space for Opare on the right-hand side. Opare was able to put in a cross, as he had enough space between him and the defender. While the cross doesn’t directly lead to the goal, it is not well dealt with before it eventually falls to Govea, who has pushed up into the box to score. 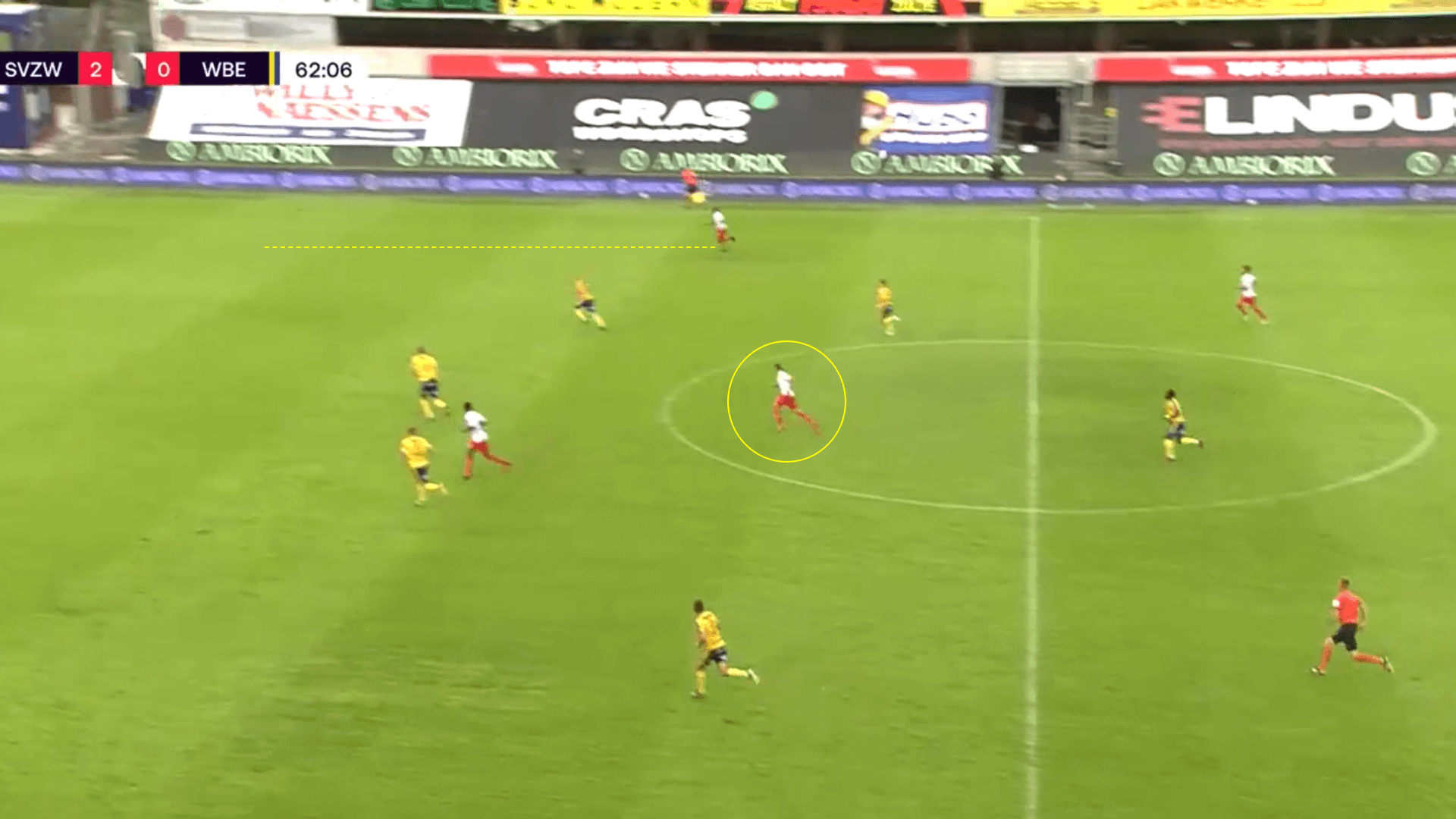 This opportunity happened in the second half because of the press by Beveren being higher, which opened up more space in behind their defenders, meaning Zulte were able to exploit this. Beveren had to change something after going 2-0 down; unfortunately for them, it played right into the hands of Zulte, who were able to exploit it in order to put the game beyond the away side.

Having taken no points from their first two games, Zulte would have seen Beveren as their best chance of getting off the mark. Winning will have made the squad happy, but the management would have been even happier with the performance tactically. Their pressing game put the away side under all sorts of pressure, with the front three able to create chances, especially in the second half.

Beveren, on the other hand, will be disappointed in losing by such a heavy margin, after having fought hard in their previous two matches. Tactically, they will probably want to work on their pressing game, and perhaps look to either go with a more intensive press, or sit deeper, and be hard to break down.