Once again, this year’s UEFA Europa League Final offered a very familiar side. Sevilla FC are now six-time winners of the competition, including four of the past seven following this match. Their opponents this year were Inter Milan, three-time winners but who have not claimed the trophy since 1998, and had not been in a European final since 2010.

This tactical analysis will look at the key points of the match in which the La Liga side came out winners of yet another Europa League. Their tactics allowed them to have an abundance of success against Inter’s well-known deep defensive block under Antonio Conte.

Both sides came into this match at full strength. For Julen Lopetegui, Sevilla lined up in a 4-3-3. Suso and Lucas Ocampos were given the responsibility of holding the attacking threat for Sevilla in advanced positions, as midfielders Ever Banega and Joan Jordan dropped deeper to counter Inter Milan’s tactics as we will detail later on. Luuk De Jong led the line in a match where he worked with little time on the ball but was essential to Sevilla’s success. 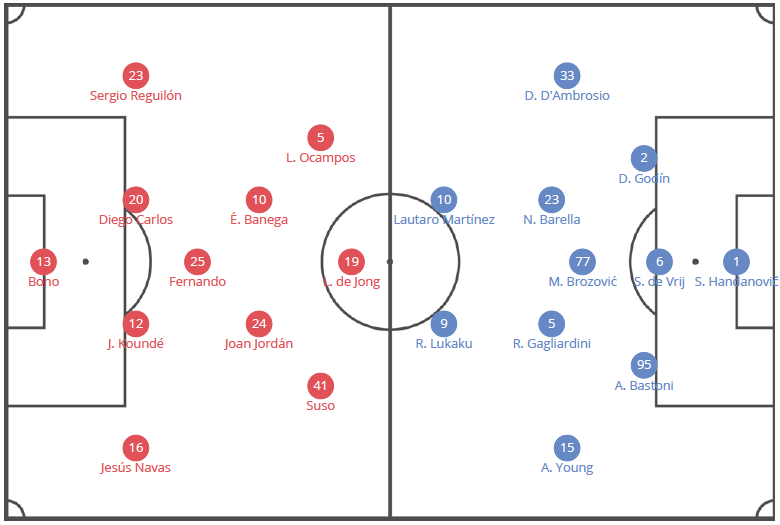 Conte kept his eleven completely unchanged following Inter’s convincing victories against Bayer Leverkusen and Shakhtar Donetsk in the quarter and semifinals. Lautaro Martínez and Romelu Lukaku led the line for what would be a very counter attacking-minded set-up from the Serie A side. Marcelo Brozovic deputised in centre of midfield but was often asked to step forward in Inter’s high pressing tactics, before falling back into their deep 5-3-2 block.

For much of this match, we saw very much of the well-known principles from each side’s respective countries. The first we will focus on in this analysis is Inter Milan’s well structured and precise tactics.

Right from the off on Friday, we saw Conte’s defensive principles in action, looking for opportunities to break at speed. While the Italian side begins in a 3-5-2 system, they quickly drop into a 5-3-2 when defending, blocking off the central channels. This forced Sevilla’s creative and danger players away from this space directly in front of the Inter penalty area. In the image below you can see Inter’s emphasis on clogging this central channel by playing their defensive and midfield lines very deep. 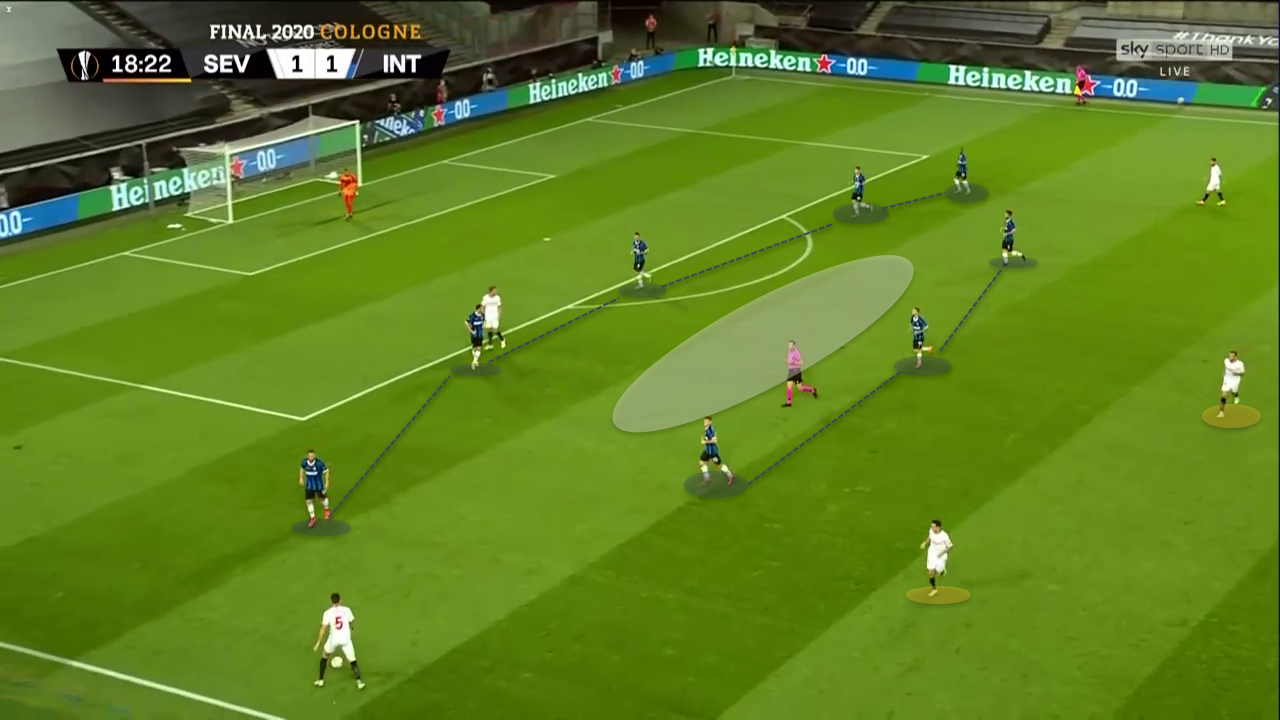 Conte expected Sevilla to dominate possession for much of this match. This worked in line with much of the attacking principles he has looked to instil in his side this campaign. When possession is won after a period of time in the defensive phase, the strikers quickly look to find space in the channels. One of the benefits of the low block is the ability to leave the likes of Lautaro Martinez and Romelu Lukaku directly on the shoulders of the opponent’s centre-backs.

The two strikers immediately look to make runs off the back of these defenders and drag them out into the wide channels. When they receive possession in this space, they both have the ability to beat their man 1 v 1. This is exactly what happened in the lead up to Inter Milan’s penalty in which they converted to open the scoring. In the image above, courtesy of Abhishek Mishra (@MishraAbhiA), you can see Inter’s attacking pass attempts towards the Sevilla penalty area. You can see this principle in the long lines from deep positions, looking to find space in behind the defensive line. 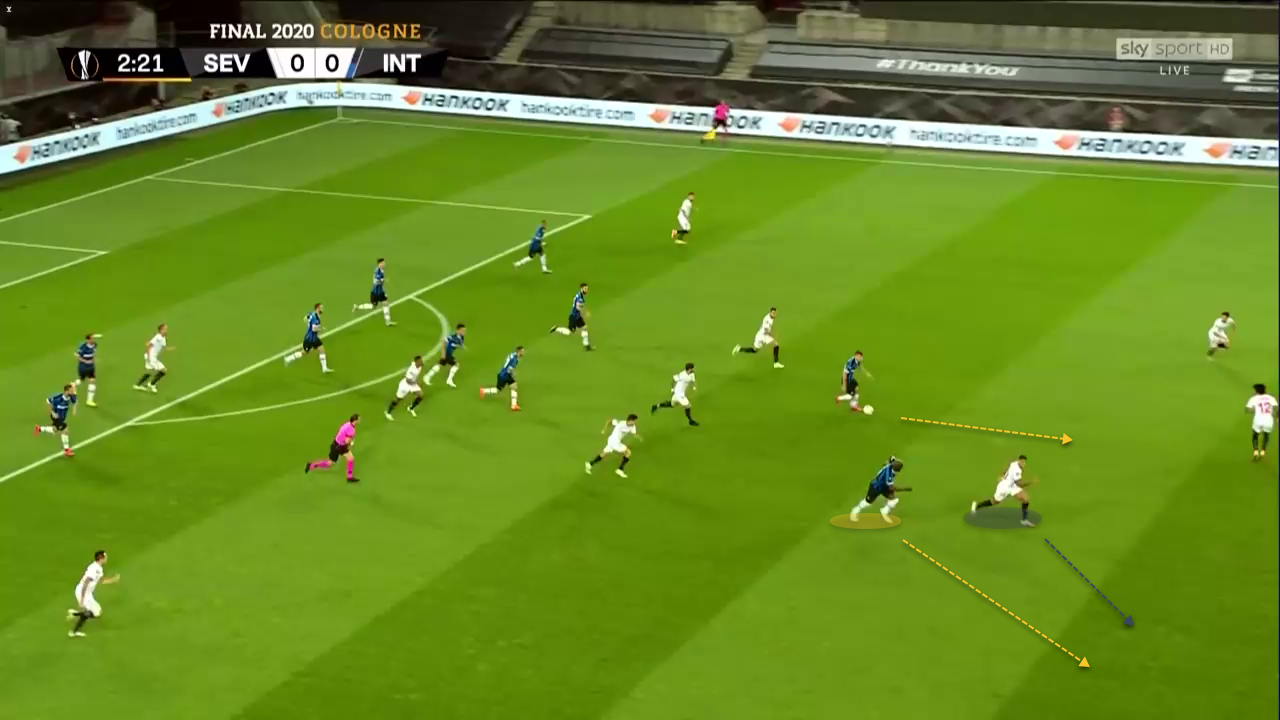 Early in the match, Inter gained possession deep in their half. Following this set-piece from Sevilla, Barella received the ball with space to run forward. As soon as Barella breaks free in this position Lukaku makes a diagonal run from his central position into the channel, pulling Diego Carlos out alongside him. 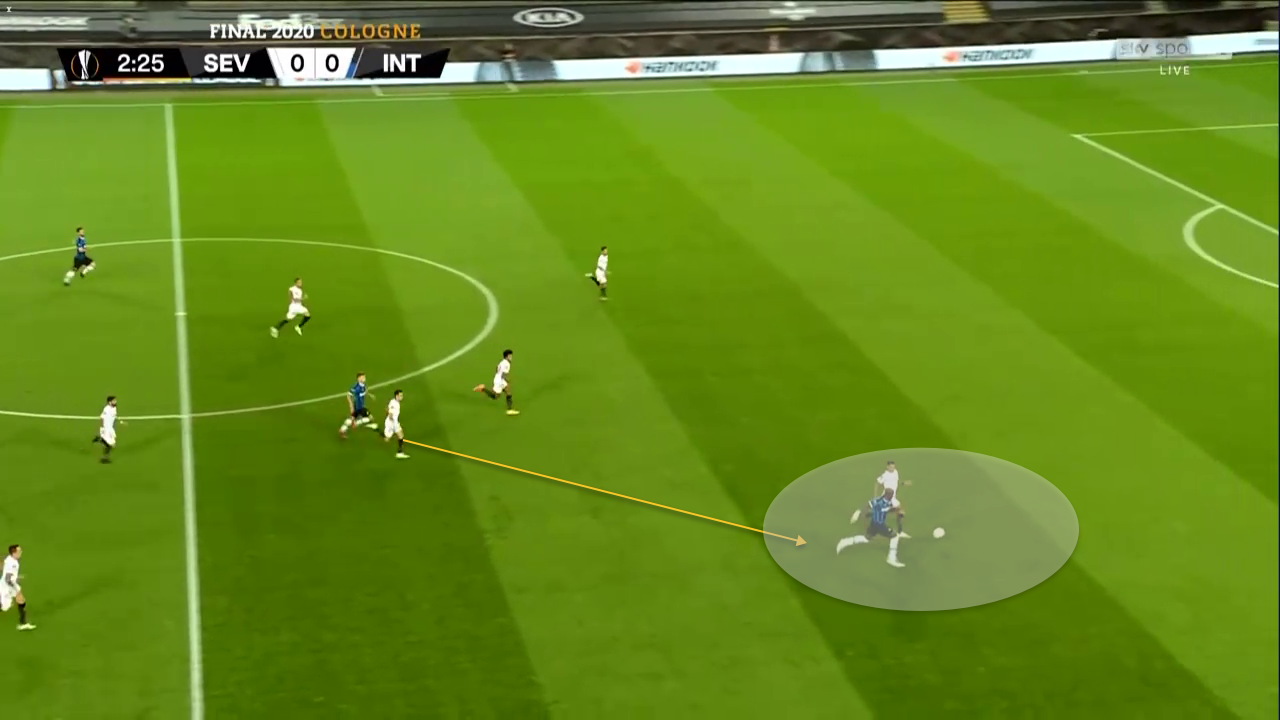 The Belgian takes a big touch as he receives the pass and manoeuvres to go around the centre-back. Struggling to keep up in this wide position, Diego Carlos reaches out to slow down Lukaku and pulls him down in the process, earning Inter Milan a penalty and the first goal of the match.

Inter has multiple opportunities to put this game in a much better position for themselves throughout the match. Martínez had a 1 v 1 on Jesus Navas with the match at 1-1 but was unable to beat the defender to get a shot away. Lukaku played off the shoulder of Diego Carlos once again in the second half with the match at 2-2 and received a pass in behind but was unable to beat Yassine Bounou in goal.

Sevilla were well prepared for this approach by their opponents in sitting deep and holding the central channel. To counter this, the midfielders constantly dropped in and around the defensive line to receive and facilitate possession. Because of Inter’s system allowing space in the wide areas due to their shape only having one natural wide player, this is the channel Sevilla directed into.

With these central midfielders dropping into defensive positions, the full-backs were encouraged to move extremely high and wide. The wingers in Ocampos and Suso pinned Inter’s wing-backs deep, which have the likes of Jesus Navas and Reguilon the time and space to receive in this area and drive forward.

In this area, Inter attempted to deploy pressing traps. Marcelo Brozovic moved into a higher position to try and limit Ever Benega’s impact on the game. He would be joined along with the near-sided central midfielder and wing-back in stepping up to close down the space for the Sevilla full-back in possession in the wide area.

However, Inter failed to use this system effectively, and instead Sevilla were often able to use it to their advantage. Using short quick passing sequences they were able to advance vertically using up-back-and-through movements. Suso would come inside and drop deeper into the half-space on the right with Jesus Navas holding the width, which would open up space in behind through the wide channel for Jordan to move into. 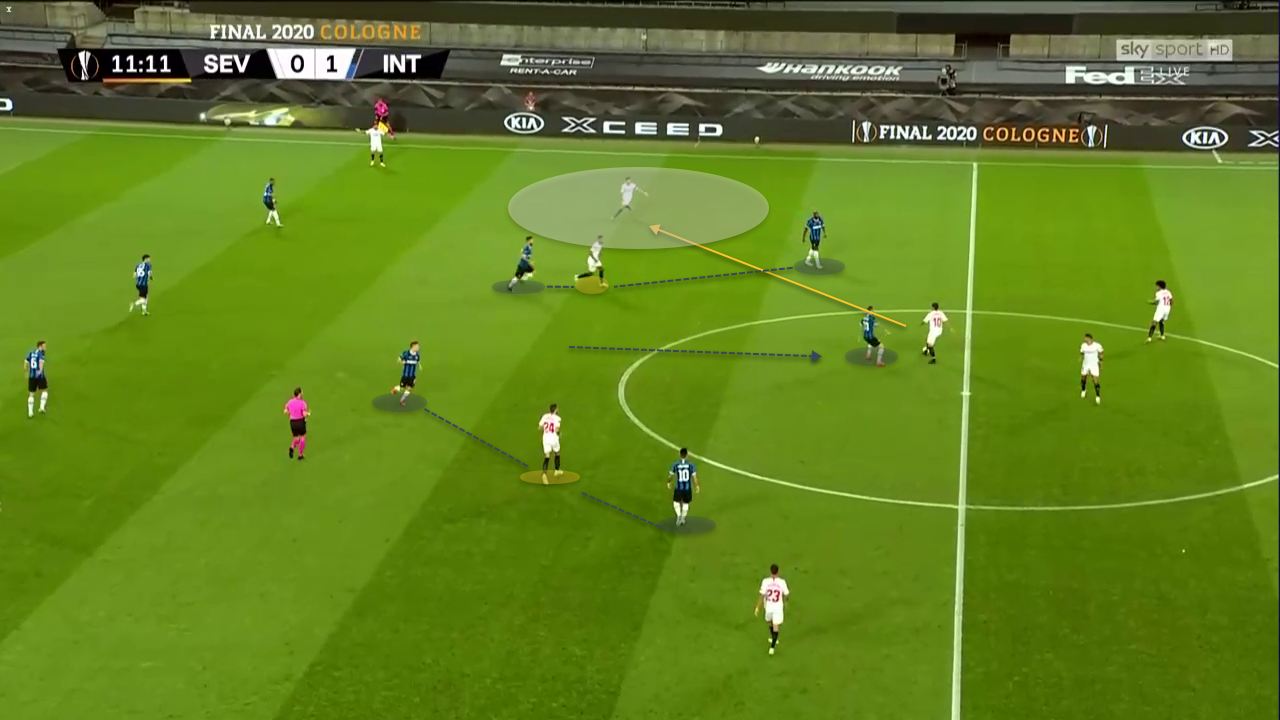 In the image above you can see Brozovic acting as the initial press for Inter. The purpose of this was to limit Banega’s impact on the match. However, the issue came from a lack of protection against the wide outlets. As Brozovic presses, Inter are essentially double marking Sevilla’s inside midfielders, with a striker and central midfielders both covering the same player. Banega identifies this and moves to the full-back outlets. 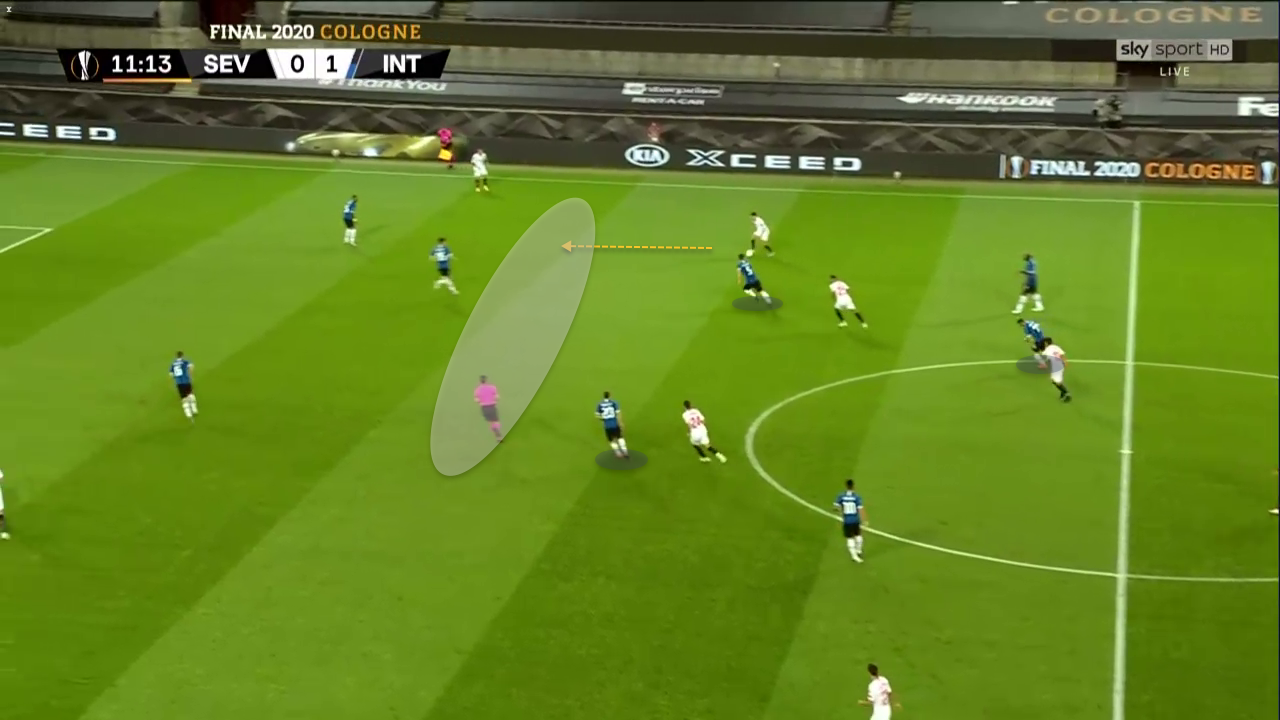 Jesus Navas now receives the pass with time and space ahead of him to move into. Inter’s midfield is now caught out trying to press Sevilla centrally so aggressively and leaves the defensive line completely exposed. Sevilla had large amounts of success throughout the match in entering the final third. They were successful in 28 of their 35 passes into this area of the pitch, a huge difference over Inter’s 27 successful passes into the final third out of their attempted 48.

Continuing in the vein of using Inter’s tactics against themselves, Sevilla were more than happy to take what was given to them in the wide channels to generate attacks. As we alluded to in the section above, the Spanish side had a great amount of success in finding space in these channels to get crosses into the box.

As you can see in the image above, Sevilla entries into the Inter penalty area came mainly from these wide channels. This is much different from the one we see above for Inter Milan, whose counter-attacking from deeper positions could be seen coming from more central positions.

Another avenue Sevilla used to gain access into the final third was the use of cross-field passes. Using the same principles as we showed above to draw out Inter’s press, they would then move to find the wide players on the opposite flank. Here Sevilla would often have 2 v 1 situations against Inter’s wing-backs with their winger and full-back. This would allow them to move into this space and look to provide service into De Jong. 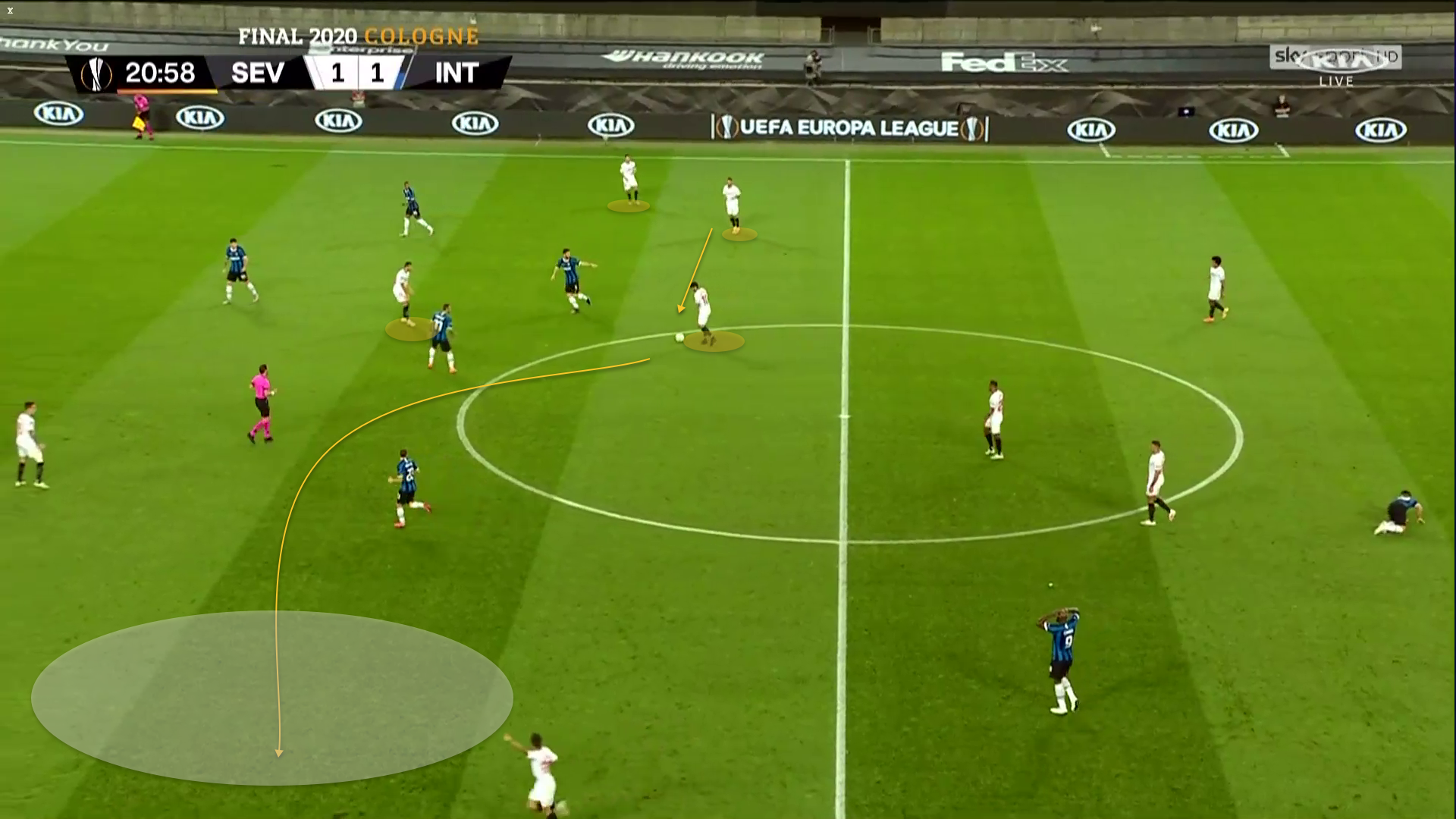 In the image above, Sevilla move into Inter’s half and start on the right side of the pitch. As Inter’s defensive shape begins to shift over to this side to look to set up their pressing traps, they pass into Banega. The Argentine quickly turns and passes across the pitch towards Reguilon at left-back. 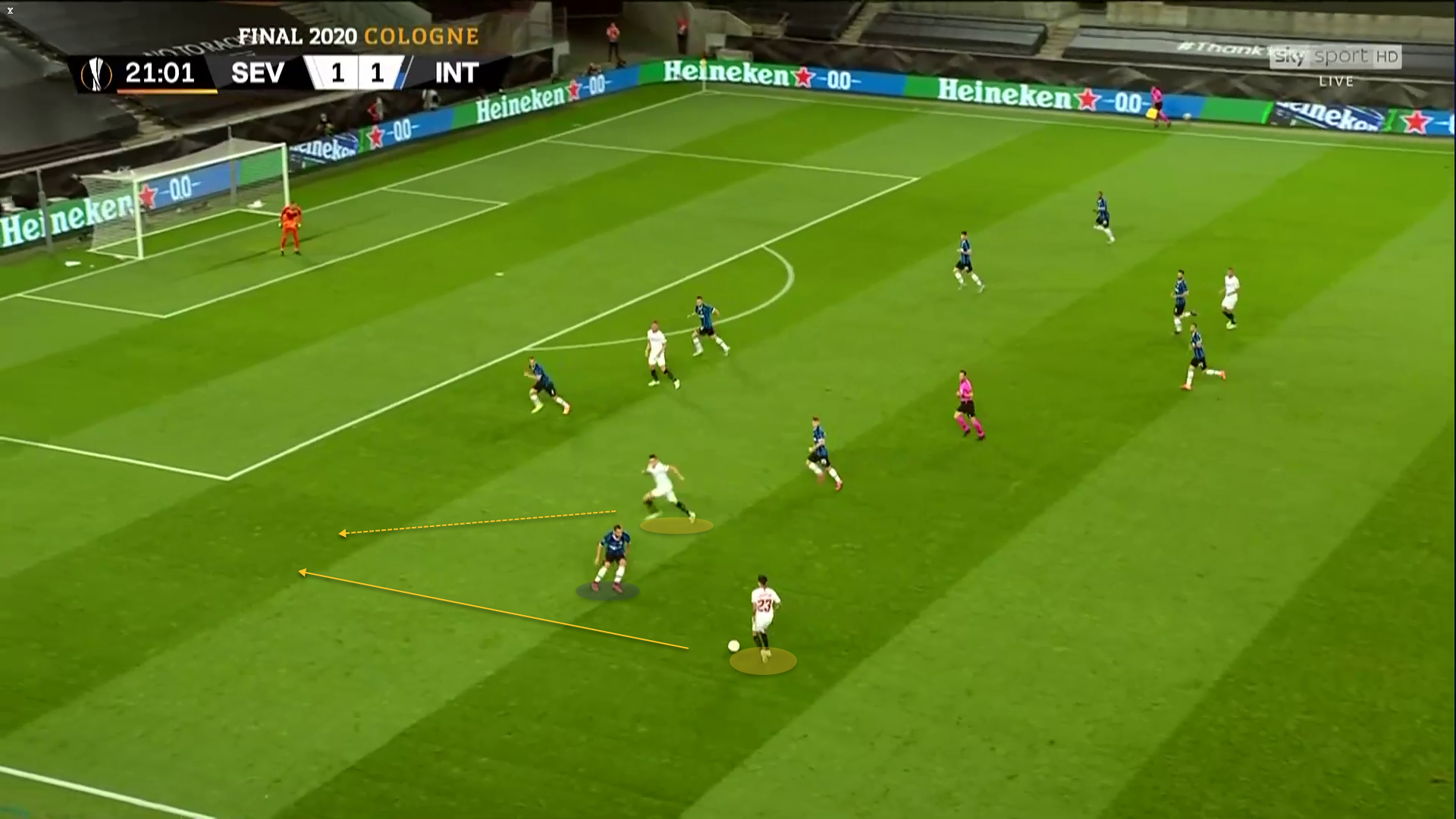 The full-back moves forward and is joined quickly by Ocampos in this wide channel as they try to take advantage of their numerical superiority in this position before the Inter midfield is able to shift over to offer cover. Below you can see the frequency in which Sevilla looked to switch play from side to side during this match. 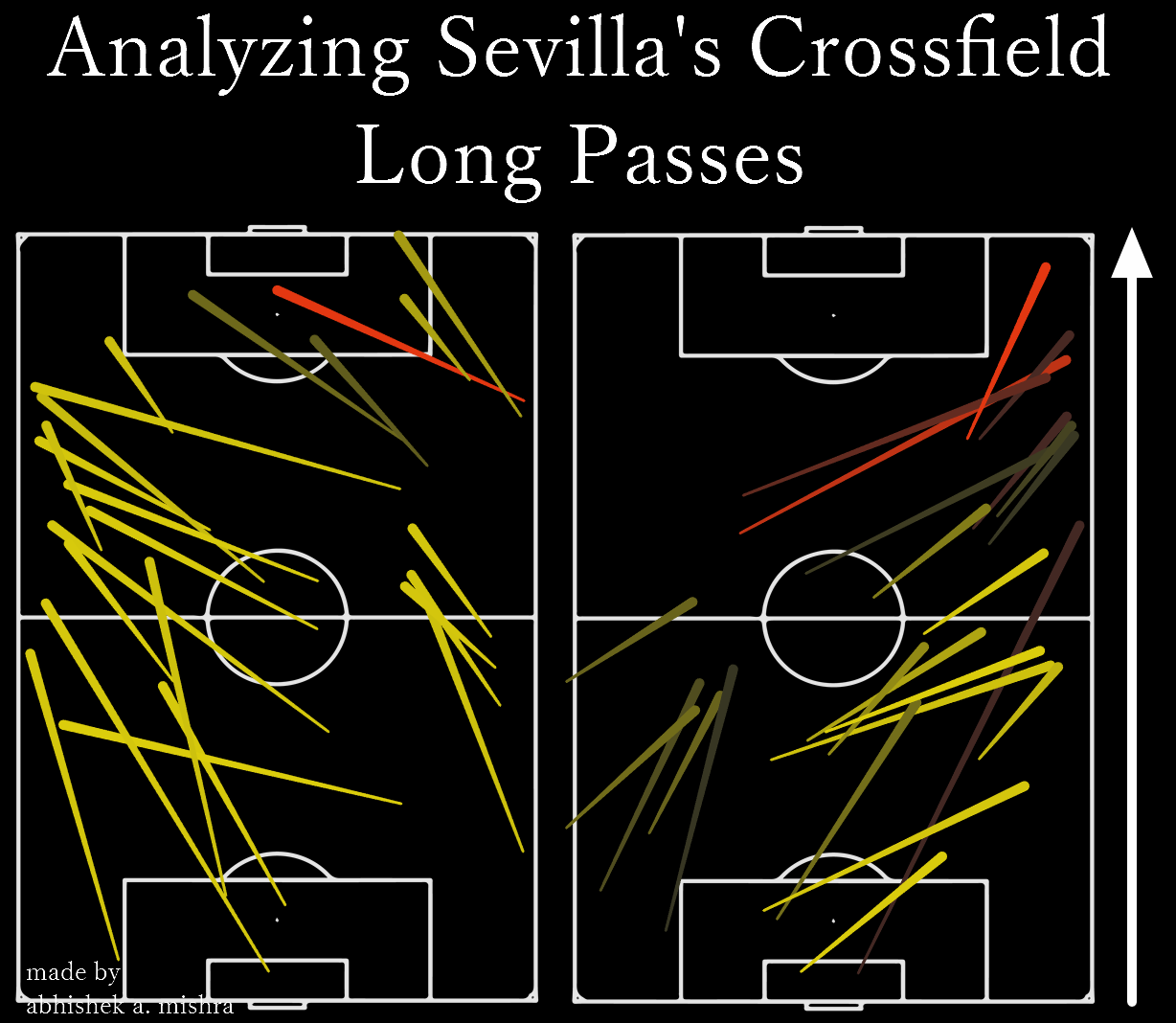 De Jong’s movement reflected where Sevilla maintained possession as they looked to attack. Because of Inter defending the centre of the pitch, he was never used in the build-up. Rather, he floated between the right and left half-spaces opposite of the side his team had possession on and looked to make runs into the box from the opposite side. Making runs from this position allowed De Jong to have the full range of options to make his run into, whether it be to the front or back post. We saw each of these in Friday’s final that resulted in goals for the Spanish side. 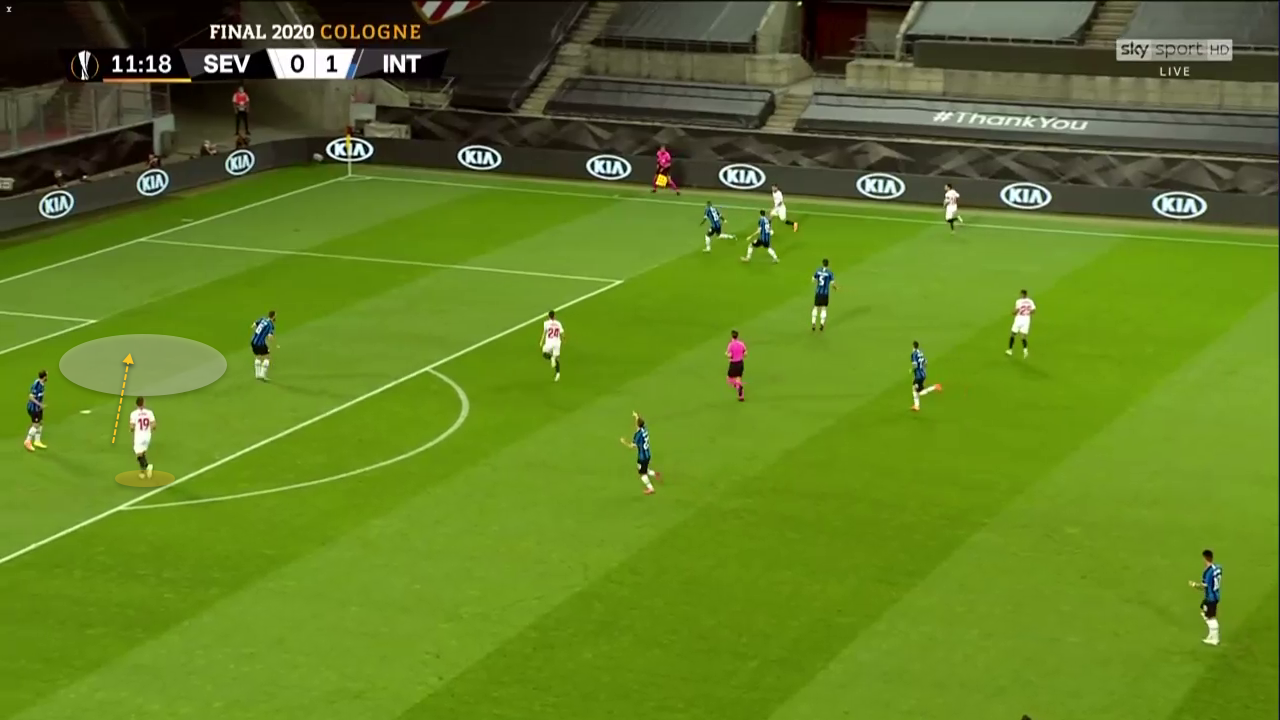 In the image above De Jong has positioned himself off the shoulder of Godin. As Sevilla work possession down their right side, he has a full view of Inter’s defensive shape and the positioning of their defenders. As his side gains access to the final third and Jesus Navas receives the ball with space to cross, the Dutch striker picks the space ahead of Godin to run into for the full-back to pick out.

The winners of this year’s UEFA Europa League were worthy on the day. Sevilla executed their tactics to near perfection. Their workaround Inter Milan’s strengths gained them access to a plethora of attacking opportunities in which they punished their opponents. On the other side of the match, a promising start from Conte’s Inter side was not followed through on in what will be a huge disappointment to the Italian side.