Sevilla secured a record sixth Europa League final as they saw off Manchester United in the semi-final with a narrow victory in an engaging and intriguing tactical battle. With both teams having already qualified for the UEFA Champions League for next season, there could be no doubts about the quality on show and both teams and coaches reflected that in their approaches, opting for offensive tactics which made for a fascinating clash.

It was the La Liga team who came out on top but they did have to come back from behind. Diego Carlos brought down Marcus Rashford in the box and it was Bruno Fernandes who converted a 22nd penalty of the season to give Manchester United the lead. Sevilla reacted strongly, with Suso scoring before half-time to level the scoreline and it was then substitute Luuk de Jong who scored the winner late on in the tie, both goals coming from crosses from wide areas.

This tactical analysis will consider the tactics of Sevilla and Manchester United in this UEFA Europa League tie. The analysis will look at how the game adapted and changed as Julen Lopetegui and Ole Gunnar Solskjær looked to overcome their rivals to reach the Europa League, with Sevilla ultimately coming out on top. 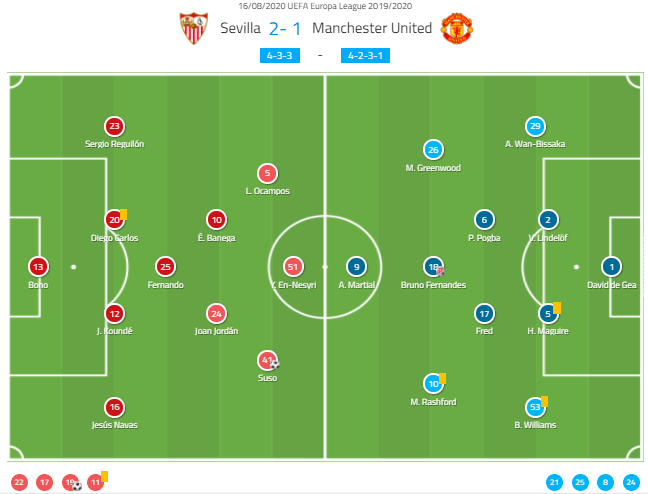 Sevilla lined up with their strongest possible line-up. Bono continued in goal due to injury to Tomáš Vaclík in the only real change to Sevilla’s strongest line-up since the turn of the year, with January arrivals Suso and Youssef En-Nesyri both starting for Lopetegui in attack with De Jong left on the bench.

Manchester United surprised with their own selection in goal as Solskjær selected David de Gea in goal ahead of Sergio Romero. Elsewhere, the team was unchanged from the side who beat Copenhagen in the previous round with Mason Greenwood given a starting role in attack.

Stretching play to find a way through

From the off, it was clear that this was a game where much of the battle would be done in wide positions. While it is not the strength of Manchester United, they were clearly looking to focus on exploiting Sevilla’s tactical weakness with the spaces that they leave between their full-backs and central defenders. With Rashford, Greenwood and Anthony Martial in attack, Solskjær had selected players with plenty of space who would look to do just what they did in the opening stages – run into the spaces between the offensive-minded Sevilla full-backs and the central defenders. In particular, they would look to capitalise on the rash challenges that Carlos has been making of late, having conceded a penalty against Wolves in a similar way with Adama Traoaré’s rapid run from a deep position forcing him into a challenge which led to a penalty. In these early stages, it was a success as it was inevitably such a move that led to Carlos bringing down Rashford inside the penalty area.

However, Sevilla adapted. Lopetegui noticed this pattern and immediately looked to cut off these spaces by forcing his defence to sit deeper with a more stretched midfield. By doing so, the two wingers would sit into deeper roles, tracking any overlapping or underlapping run, while the central midfielders on either side would pick up the runs of attacking players who would look to move from central to wide areas. Éver Banega and Joan Jordán did this role well, leaving Fernando to pick up any central runners who came through like Paul Pogba. In the case of a further playing joining the attack, even En-Nesyri would drop back. But what was clear was that Sevilla would not mind sitting in a deeper, structured position to avoid leaving any spaces open.

This set-up from Sevilla frustrated Manchester United, who could no longer find the spaces to run at Sevilla and were instead forced to be more patient. It reflected how Sevilla were gaining more control of the game and showed periods of dictating the play. This became more and more frequent as Sevilla settled into the game and United grew more frustrated. In the final 15 minutes of the first half, Manchester United recorded nine attempted long passes, compared to just seven from the first half-hour of the game. This reflected how they grew more frustrated and resorted to these long balls over the top which would not lead to any great chances in the first half.

Sevilla creating their own width

At the opposite end, Sevilla looked to create their own width by stretching play, much like Manchester United did in the other half, but used a different approach. In Victor Lindelof and Harry Maguire, it was clear that En-Nesyri would have his work cut out if he were to operate as a target man and look to hold play up. Instead, he drifted wide to attack Aaron Wan-Bissaka, rotating freely with Suso and Lucas Ocampos as his two other forwards who would typically start either side of him, usually with Suso on the right and Ocampos on the left. This movement, usually towards the left, would allow them to drift into a deeper central role.

As can be seen here, En-Nesyri drifts to the left, almost reaching the touchline and receives the ball. Immediately attacking full-back Sergio Reguilón bursts into the scene and exploits the gap left between Wan-Bissaka and Lindelof, while also being tracked by Greenwood. With Lindelof also moving over to cover and Maguire watching the run of Suso from the opposite flank, that creates a pocket of central space which Ocampos, who has dropped off, can now use his pace to sprint into to get on the end of a cross from Reguilón as he moves into the final third and looks to get a cross delivered into the box.

This bamboozled the Manchester United defence when it came to their marking and they would often struggle to track their men, with Fred especially struggling to stick with Ocampos as he dropped and then burst forward again. Incredibly, all of Sevilla’s xG in positional attacks came from moves starting in wide positions in this way. The effectiveness with which Sevilla delivered crosses into the box was crucial here as they simply had to be clinical, only having attempted fewer crosses than the 14 they recorded in two games since the restart. Despite that, both goals scored came from such movements, later relying more on the wide movement of the wide forwards, Munir El Haddadi in particular, rather than on De Jong, who took up a more central role and would then get on the end of Jesús Navas’ late cross.

The factor which undoubtedly decided the game was not so much how teams looked to generate space in wide areas, but rather through the quality of the tacticians on the bench. This is where the difference between Lopetegui and Solskjær became glaringly obvious as Manchester United started brightly in the second half. Much like in the first, Manchester United were beginning to find spaces early on and would be direct and aggressive in how they attacked them. The key difference came that play would now be dictated more by Paul Pogba and Fred, looking to transition centrally as Sevilla spread too wide, having been too narrow early on in the first period.

This example shows how two Sevilla central midfielders, Fernando and Jordán, became too separated with Banega also offering poor support, allowing Anthony Martial to receive the ball and directly run through the middle at pace, causing defenders to have to turn and spin quickly to try to block him, with neither Jules Koundé nor Carlos able to block him from getting his shot away, instead, relying upon Bono’s heroics in goal. Remarkably, 72% of Manchester United’s xG came through this approach of attacking through central areas.

Loeptegui identified this and reacted immediately. Unlike Solskjær who had seen his team gradually lose influence in the first half, the former Spain coach was not prepared to wait and by the 56th minute had already made a double substitution. The changes, Munir for Ocampos and De Jong for En-Nesyri were like-for-like positionally but created a significant shift in Sevilla’s game plan. Sevilla’s midfield became more aggressive and energetic in their press. With Munir pressing more intensely and De Jong dropping deeper to press, the three central midfielders could stick to create a more narrow and organised block. The pressing of Munir, Suso and De Jong in particular would repeatedly force Manchester United to turn back and play lateral or backwards passes. It was a risky approach in looking to push high to block off the source of the threat, but Sevilla stopped The Red Devils from feeding the ball into Martial or anyone else to run directly at Koundé and Carlos through the middle.

The changes generated more of an impact in regaining control in the middle, largely through the deployment of fresh legs, rather than through adding attacking prowess. The fact that Solskjær waited until the 87th minute to make his first change again provided further evidence of how Lopetegui had taken the game by the scruff of the neck. While he responded quickly in order to change the course of the game with a double substitution, Solskjær was too lax in his approach at a time when Manchester United’s midfield were crying out for greater creativity and energy in order to resist the Sevilla press. Instead, Sevilla benefitted and would run out victors, in part due to the swing in momentum created by Lopetegui’s changes.

Sevilla deservedly secured this victory against Manchester United in the Europa League simply because of the way in which Lopetegui adapted and transitioned his tactics and strategy frequently. Adapting to prevent Manchester United from gaining momentum, his changes in terms of tactics and personnel allowed Sevilla to correct their mistakes and become more consistent with a further foothold in the game.

For United, Solskjær’s tardy reactions allowed Sevilla to do that with ease. As fresh legs pressed to turn over possession and become more efficient, he was left watching on. While his initial approach at the start of each half was successful in causing problems, and perhaps enough of a threat to deserve at least two goals, he did not react once Sevilla found a solution to these challenges. When it comes to such an elite and competitive level, such tactical flexibility can be decisive and in this case, it was Lopetegui who made a stronger case and consequently led his team to victory and the Europa League final.