Last weekend The Belgian Pro League were the first ones to kick start the 2020/21 football season after it was delayed due to the COVID-19 pandemic. As the first matchday had some interesting matchups on the programme, the second one promised to be another exciting weekend full of football games.

One of these games that promised to be an interesting battle on paper, was the matchup between Anderlecht and Sint Truiden. Anderlecht, under the guidance of Franky Vercauteren and former Manchester City captain Vincent Kompany, started this season with huge ambitions recruiting new blood on all levels in order to bring the title and Champions League football back. Sint-Truiden, on the other hand, looked to improve their team performances by hiring former Premier League defender Kevin Muscat as their manager.

This tactical analysis in the form of a match report will take a look at the game between Anderlecht and Sint-Truiden. The analysis will give an insight behind the tactics both teams used and eventually made Anderlecht get the three points.

Franky Vercauteren set out his Anderlecht side in a 4-3-3. Out of possession, his side change to a flat 4-4-2 formation.  Hendrik Van Crombrugge started in goal, with a back four made up of Derrick Luckassen, Elias Cobbaut, Michael Amir Murillo and Bogdan Mykhaylichenko. Peter Žulj, Adrien Trebel and Michel Vlap completed the midfield trio. With Jeremy Doku playing on the left and Anouar El Hadj on the right, the striker position was occupied by Landry Dimata. 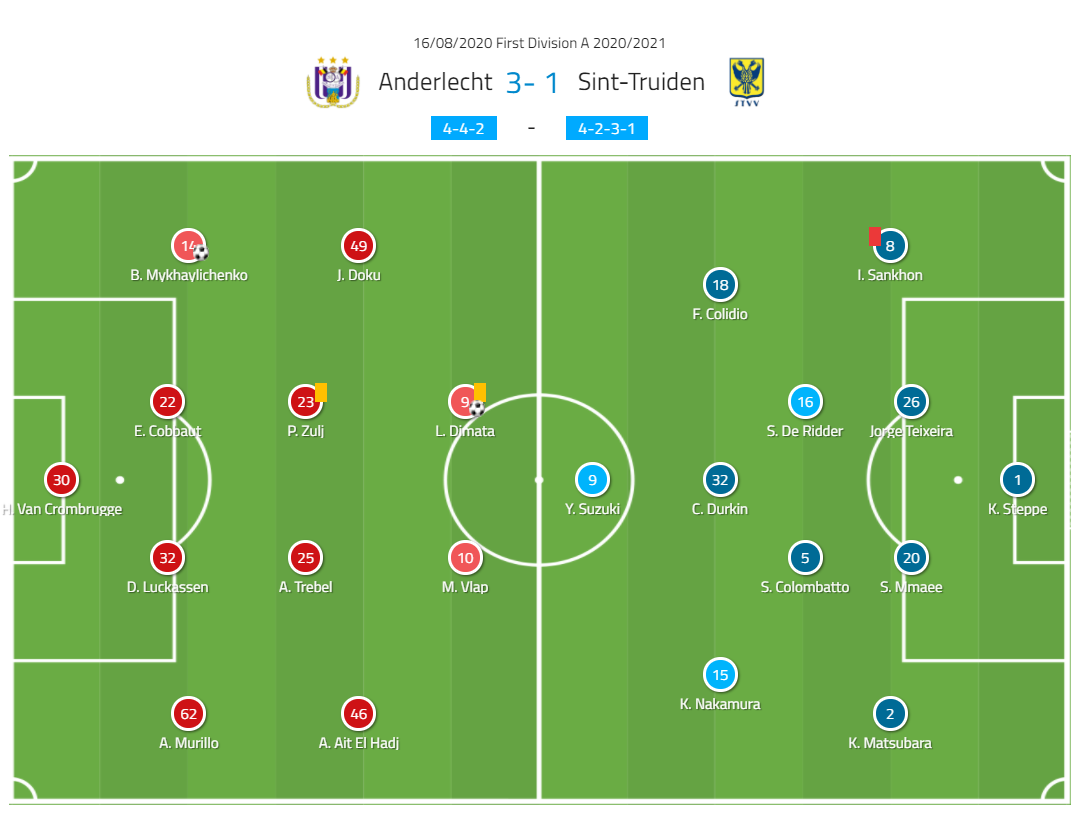 The Sint-Truiden manager Muscat chose to line his team up in a 4-4-2 system. Kenny Steppe started in goal, with Jorge Teixeira, Samy Mmaee, Ko Matsubara and Ibrahima Sankhon making up the defence. Sint-Truiden’s central midfield consisted of Santiago Colombatto and Steve De Ridder. The flanks were occupied by Keito Nakamura and Christopher Durkin. Upfront Facundo Colidio and Yuma Suzuki led the line.

How to take advantage of a man orientated press

Both teams started with a clear plan when out of possession. As Anderlecht formed a 4-4-2 shape in a medium block out of possession, it was easy to press Sint-Truiden’s build-up. Sint-Truiden built from the back with the centre-backs splitting and two pivots dropping while the full-backs push up. This complemented Anderlecht’s 4-4-2 out of possession, making it easy to transition to a high man orientated press when the right pressing trigger occurs. The image below illustrates this perfectly. 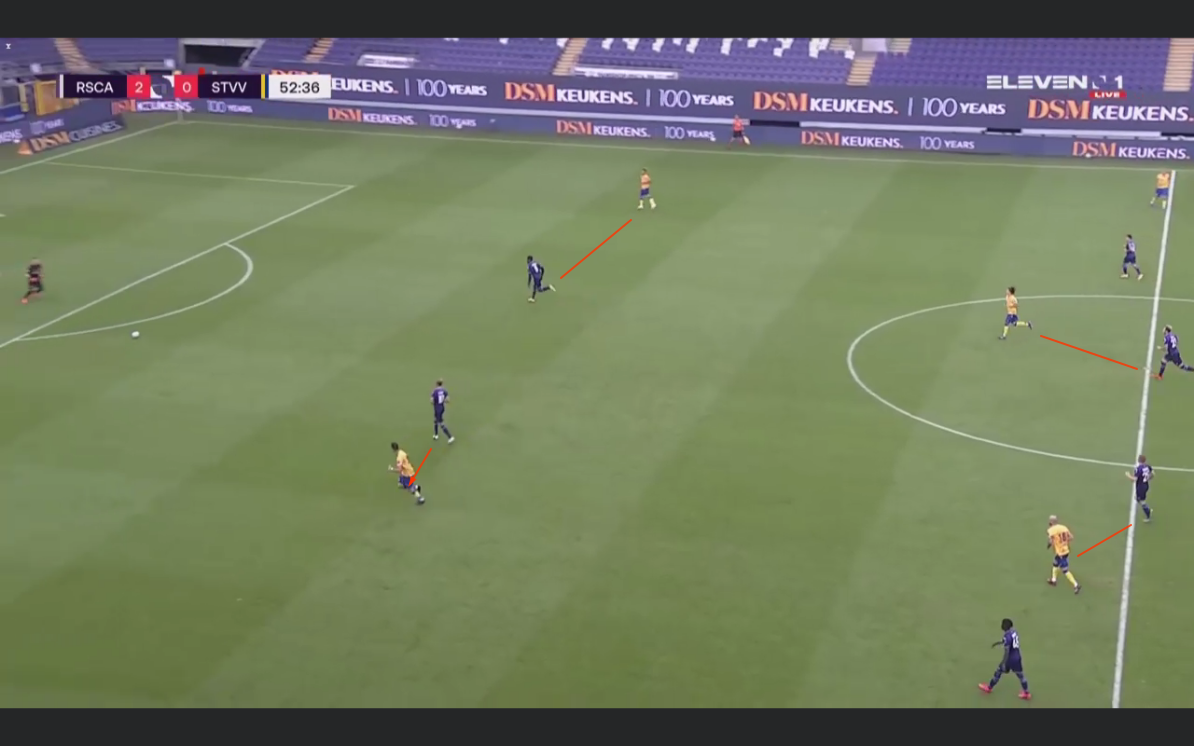 The sequel can be seen below too. Dimata would jump from the opposing centre-back to the goalkeeper to force the play to one side or even to force long balls. The rest of the team looked to man-mark Sint-Truiden which made it difficult for them to find a good option. The long balls were especially an advantage for Anderlecht because Sint-Truiden didn’t have the aerial presence to deal with these high passes. Their PPDA wasn’t extremely low at 11,4 indicating that they prefer to start from their medium block and when the right pressing trigger occurs, they will transition to a high press. 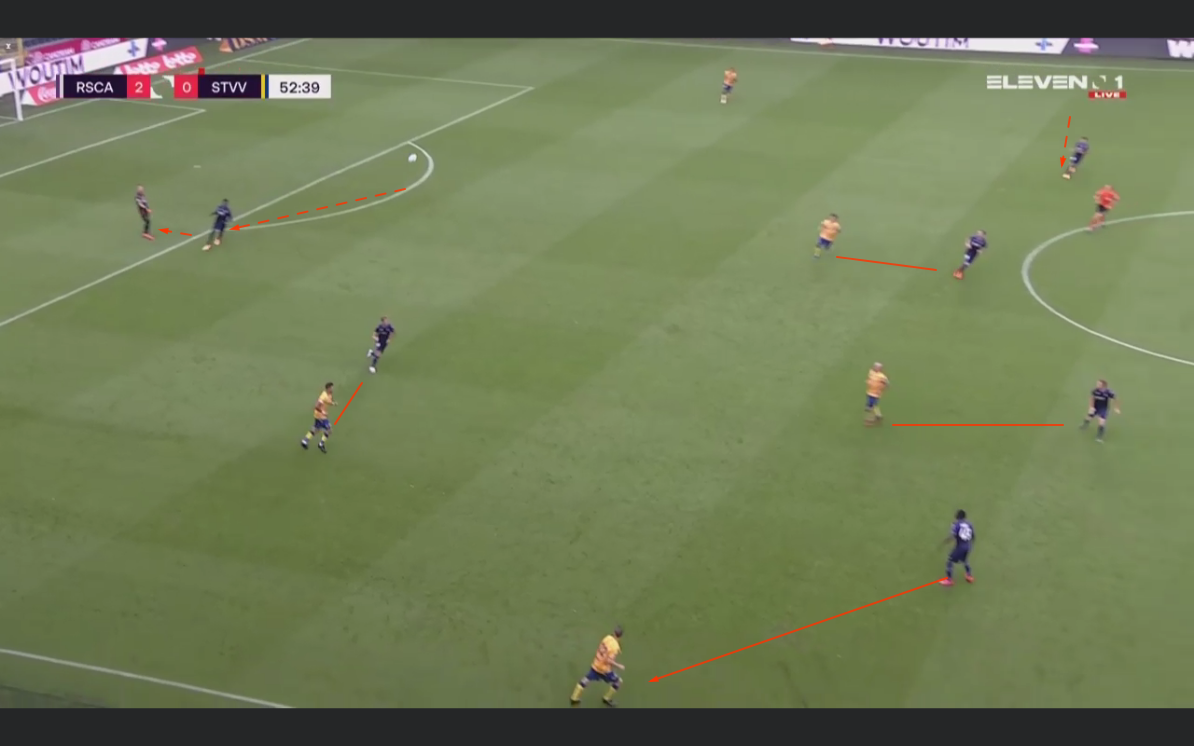 On the other hand, Sint-Truiden’s low block looked to frustrate Vercauteren’s men during this game. This did work for most of the game. As their PPDA tells us at 20.4, they prefered to sit back and look for the right moment to start a counter-attack. In the image below we can see how their block is formed. The midfield was man orientated whilst the attackers had to defend the space. 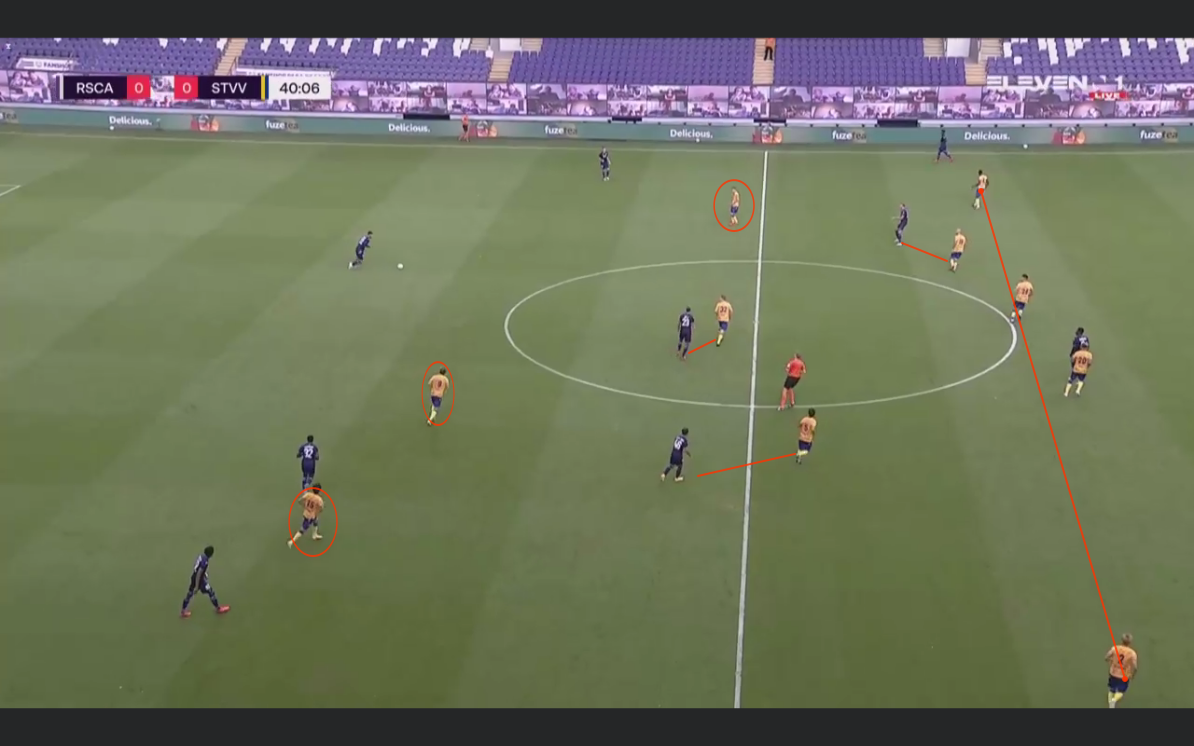 Consequently, the home team looked to manipulate this midfield man orientation of Sint-Truiden. Dimata would often drop as a false nine into midfield to create a 4v3 centrally. Below Dimata is followed closely by Teixeira which happened often and nullified the overload that Anderlecht tried to create. The aggressive marking of Teixeira did create space in behind him which Anderlecht potentially could have exploited through diagonal play and vertical movement but this wasn’t the case. This resulted in less attacking opportunities and a more closed game. 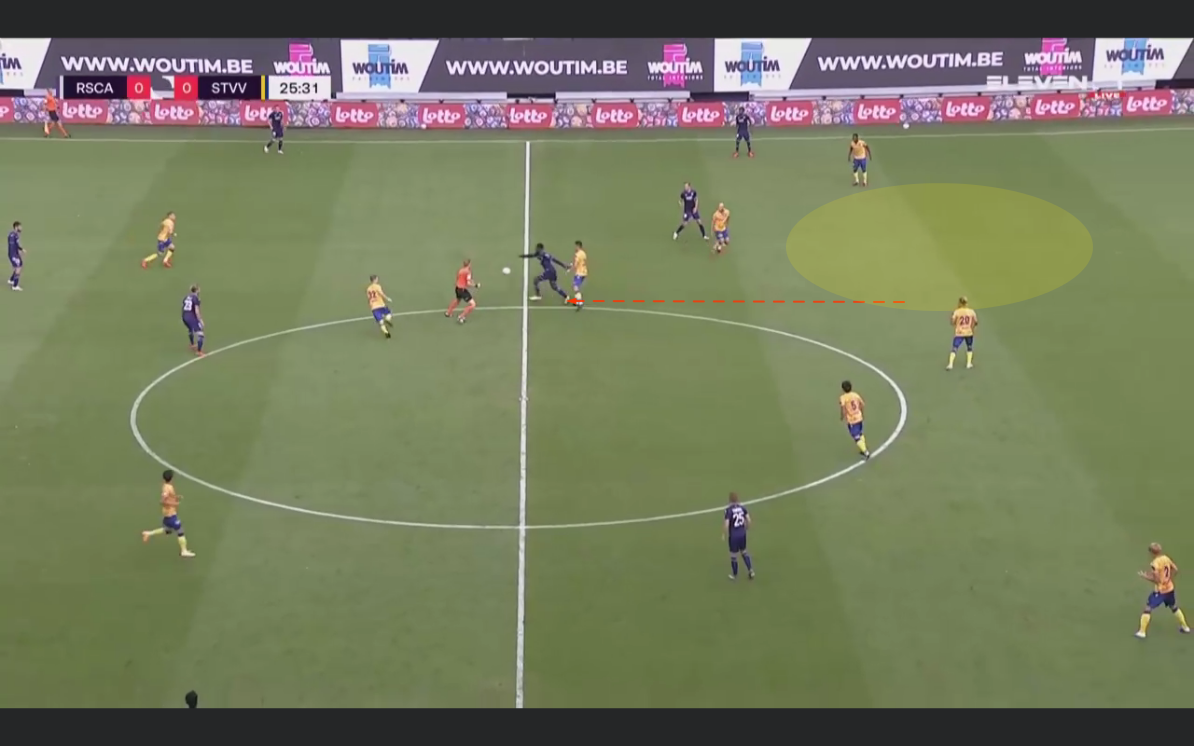 Another way to create an overload was the penetration with the ball of the full-back. In the image below, we can see Mykhaylichenko, the full-back, posses the ball in an inside position. The idea is to engage the second line but the opponent’s second line is focused on man-marking Anderlecht’s midfield. This gives the full-back the opportunity to dribble through the centre without any pressure. Mykhaylichenko scoreed from this situation giving Anderlecht the lead. 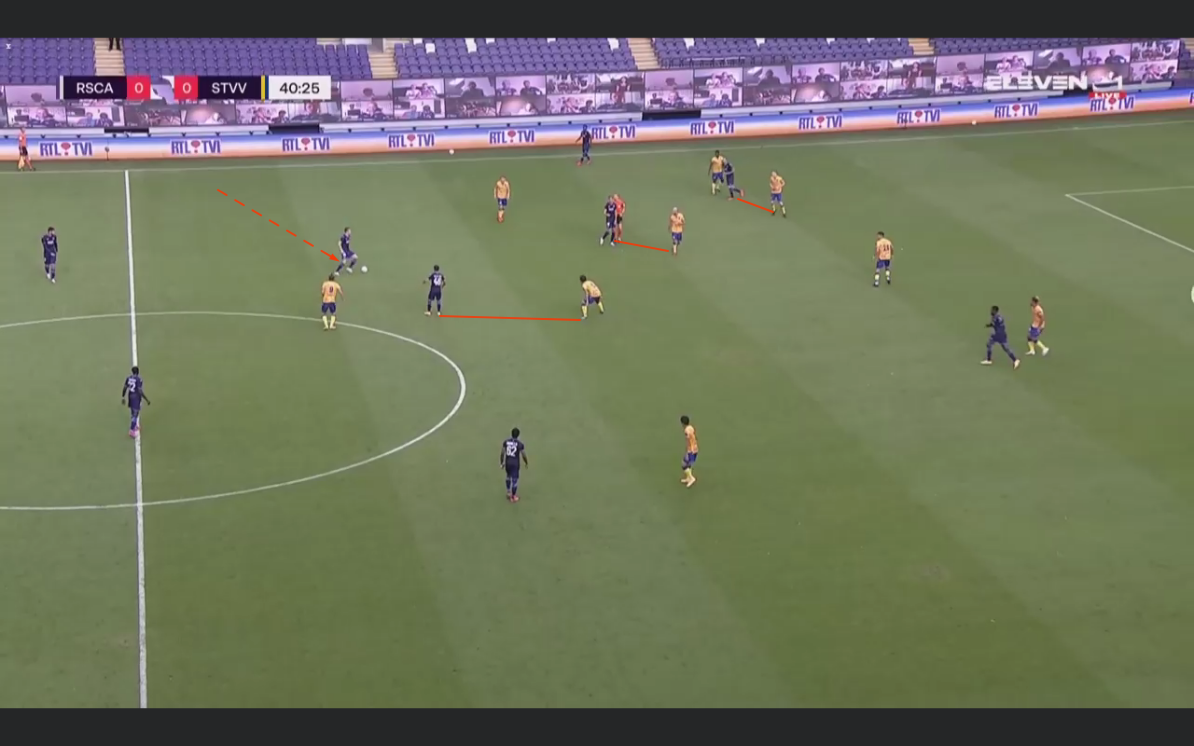 Thus under the influence of Kompany’s ideas, partly inspired by Pep Guardiola, Anderlecht try to play a more dominant style of football in the possession phase. This clarifies the dominance of possession with Anderlecht having 55 per cent of the ball during this game.

The image below shows the average positions of the Anderlecht players in the possession phase and the combinations with more than 3 passes in one direction. The dot size corresponds to the number of touches. The image clarifies that the most passes were between the two centre-backs and the pivot and the stats don’t lie.

Anderlecht produced 229 lateral passes during this game. In the image below we can see why. Their flanks are double occupied which makes the central ball carriers play the ball out wide. 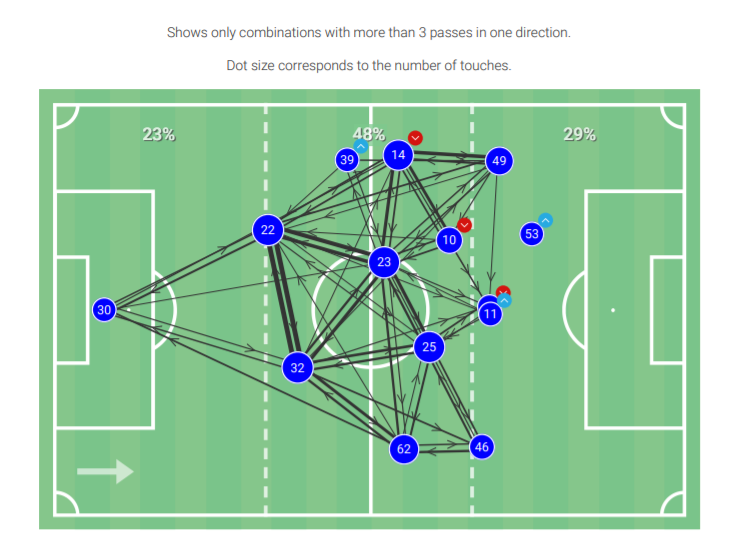 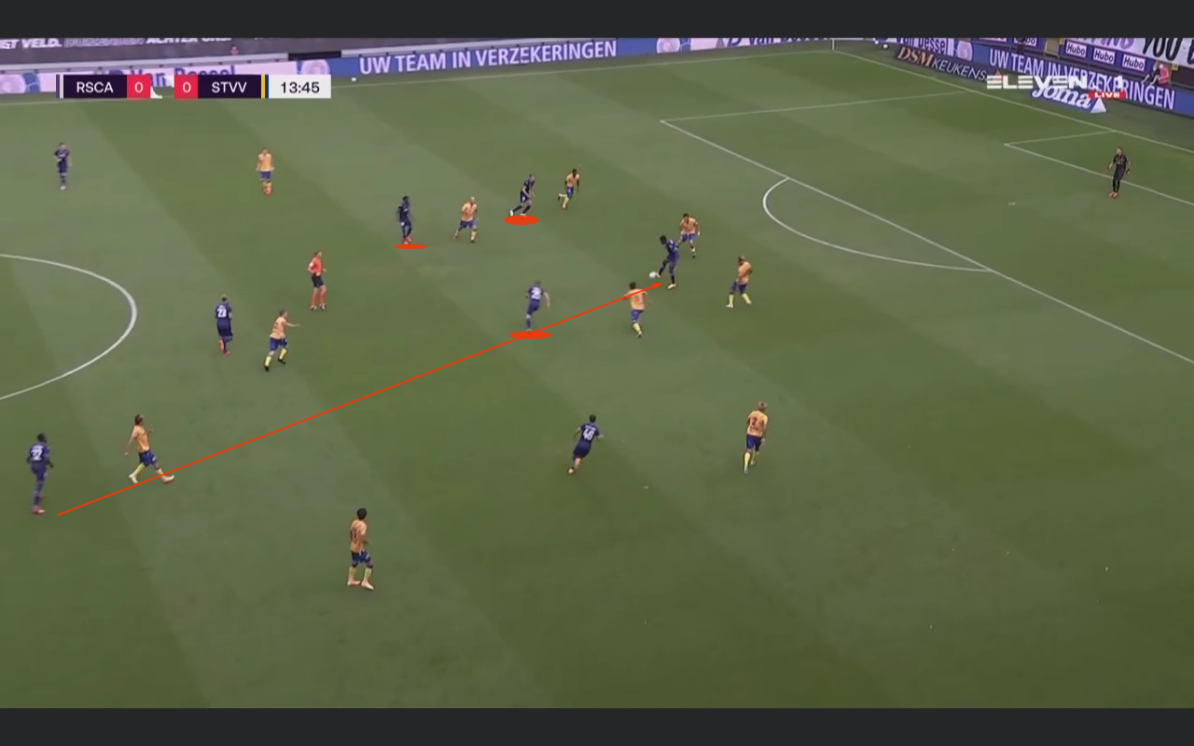 But after playing vertically, as the image suggests, there weren’t players running into depth, waiting for a flick on or pass into depth. This made Anderlecht’s attacking play predictable and easy to defend as everything happened in front of the Sint-Truiden’s defence.

The section above gave us a clear idea of that Anderlecht had difficulties exploiting space in behind. And breaking down Sint-Truiden’s compact block. The main problem was their lack of penetration in behind the opponent’s last line.

The example below shows how Doku is isolated in a 1v2 situation and nowhere to go. Vlap recognises this and looks to support him but instead of penetrating through the full-back/centre-back channel, he chooses to ask the ball to feet. This results in Anderlecht losing the ball due to the underloaded area they tried to play out. 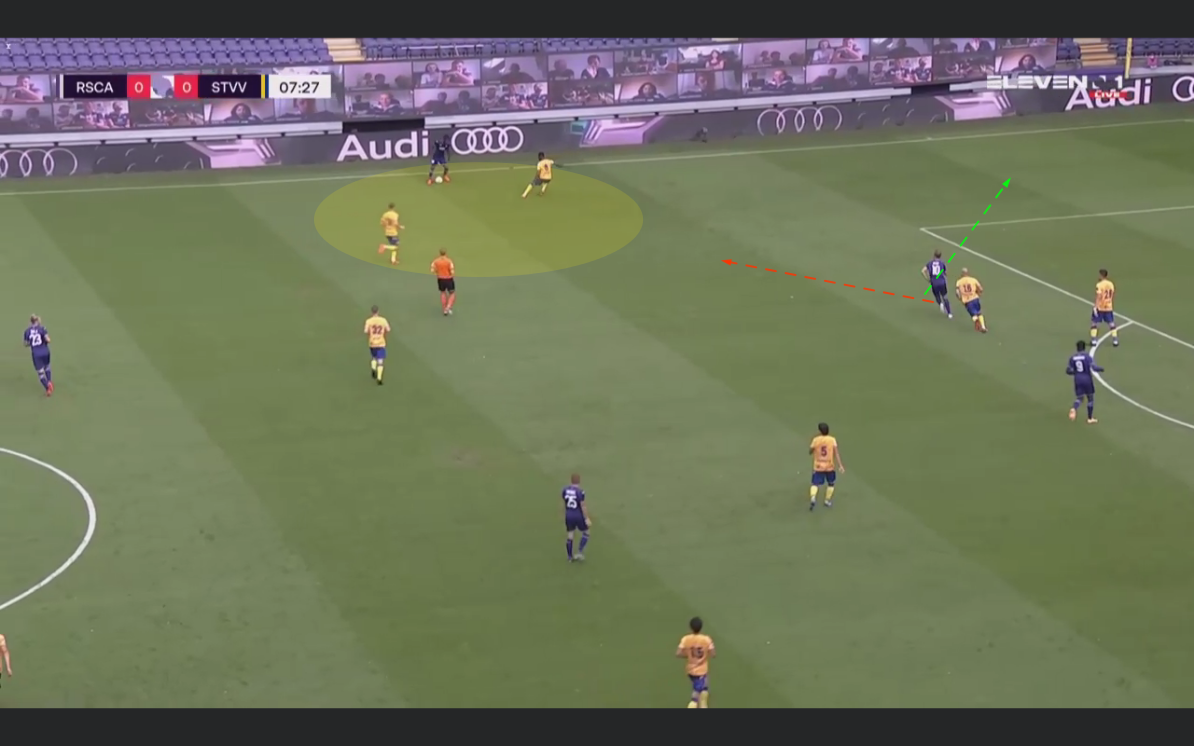 Another example below. Žulj tries to penetrate the full-back and centre-back channel but slows down quickly due to Vlap’s position blocking the opening. What follows is that Doku only can playback to his own centre-backs. 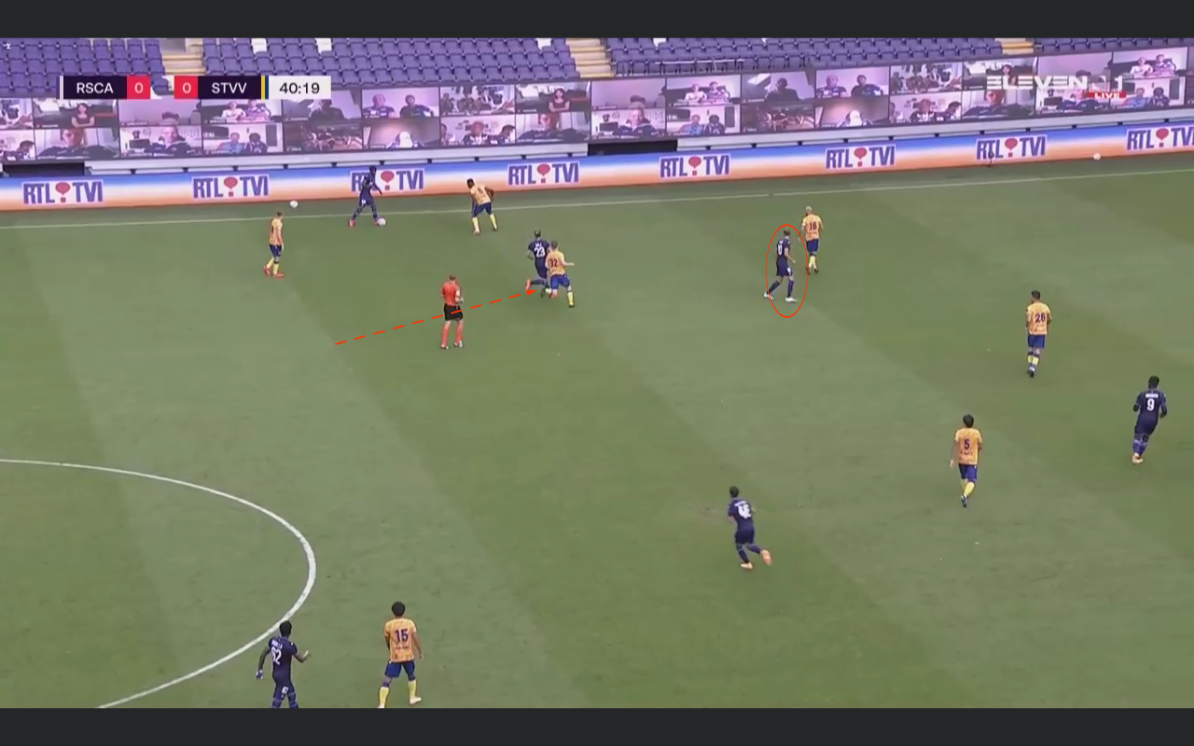 Whilst Anderlecht won the game 3-1, it wasn’t a very convincing performance of Vercauteren’s team. They played more than 40 minutes against ten men. Despite the one-man advantage, Anderlecht didn’t make it count. This led to a rather nervous end to the game with Balongo scoring the 2-1 but eventually, Pery Tau would put down the final score on the scoreboard.

This game illustrated, although tactically well organized, Anderlecht need to sharpen their attacking play and in particular their play into depth. As it is still early in the season, the time is on their side to sharpen their attacking play. As Kompany is now taken over from Vercauteren. For Sint-Truiden it was a rather disappointing game. The chances to win against Anderlecht are most of the times not in favour of the opposition. But it was the way they lost the game by not finding their attacking stride. We can conclude that both teams still have some work to do.