Up until Friday, both OH Leuven and Beerschot Wilrijk were set to face each other in a winner-takes-all promotion decider, with the away side taking a slender advantage into the second leg. However, the Belgian football authorities, in agreement with the clubs, decided to extend the Belgian Pro League to 18 teams for the 2020/21 season, effectively promoting both sides. Instead of battling it out for promotion, both sides were now just playing for the right to be named second tier champions.

Both sides have links to the EPL, with Leuven being owned by Leicester City and Beerschot being linked to Sheffield United. Leicester now have an even better league in which to loan out and develop young talent, before selling them on for big money to the likes of Manchester United.

With promotion guaranteed, both teams went into this game without as much pressure. Leuven had changed manager since the last match back in March, with Vincent Euvrard being replaced by former Beerschot manager Marc Brys. Beerschot had kept young manager and former player Hernan Losada, who tactically out thought Euvrard in the first leg. Once again, he won the battle in the second leg as well.

This tactical analysis, in the form of a match report, will look at how Losada’s tactics once again led to a victory. The analysis will look at how Leuven attempted to change their approach in the second leg, as well as how Beerschot were not afraid to push forward and look for more goals. 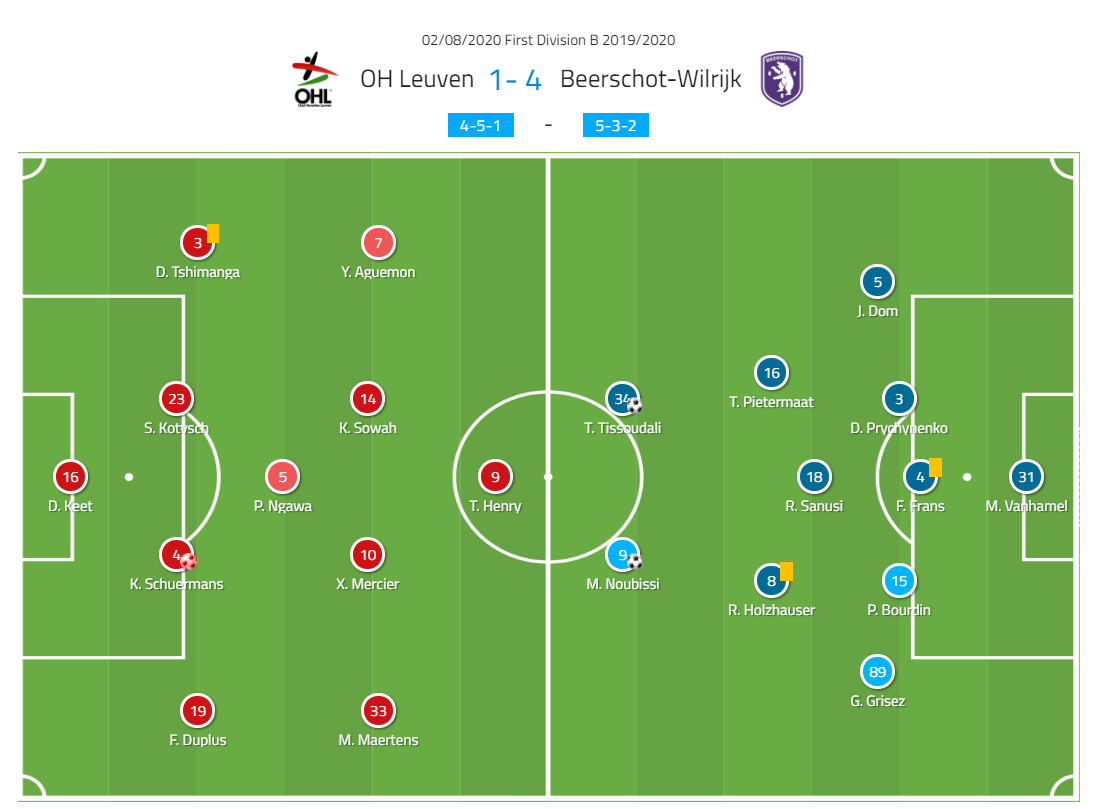 Leuven deployed a 4-5-1 formation, which was different from the 3-4-2-1 they had used in the first match. Leading league and club scorer Thomas Henry was the lone striker, with creative midfielder Mathieu Maertens deployed as a right winger rather than as the left central midfielder. Impressive defensive midfielder from the first leg, Aboubakar Keita, was replaced by Pierre-Yves Ngawa. Experienced South African international keeper Darren Keet also came in between the sticks.

Beerschot, on the other hand, converted their 3-5-2 into a 5-3-2, with Gregory Grisez and Joren Dom operating in a more defensive position than they had in the first leg. Apart from that it was the same side that had won the first leg.

Tactically, Beerschot out thought Leuven in the first leg. The then away side struggled to get their key players into the game. Maertens was one of these players for Leuven during the regular season, scoring plenty of goals from midfield. He usually operated in a more central position, so it was a surprise to see him out wide. However, it was clear that he had creative freedom to drift inside and support Henry. This allowed for the right-back, Frederic Duplus, to exploit the space created by the inside forward.

As we see from this below image, Maertens has drifted quite a way inside to get close to Henry, allowing Duplus to push further forward. In the first leg, Maertens didn’t quite have the effect on the game that had been hoped, and Henry occasionally lacked support. Clearly the side had looked and thought of how to get them both into the game more by starting Maertens outside and giving him the freedom to drift inside. 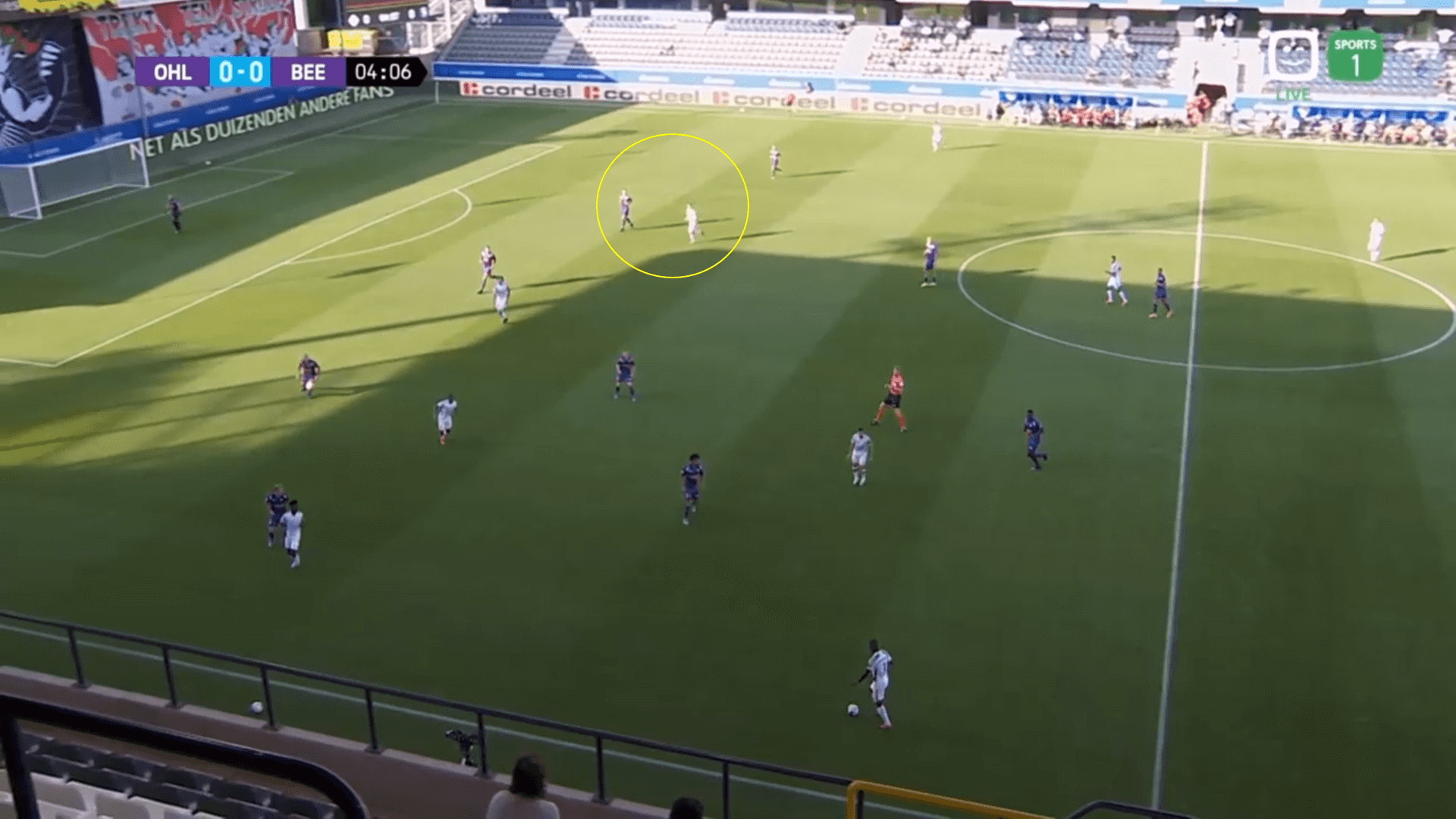 Tactically this was designed to ensure Henry didn’t get too isolated, while also allowing Duplus to push back the full-backs of Beerschot, who, despite lining up in a five at the back, like to get forward and provide width. Allowing Maertens this creative freedom allowed him to get on the ball more, as well as then being more difficult for the away side to pick up. For example, we see below how he has drifted all the way into the very central areas of the pitch, ahead of Henry, to support a play. Unfortunately for Leuven, the runner was offside, but the move highlighted the danger that was there. 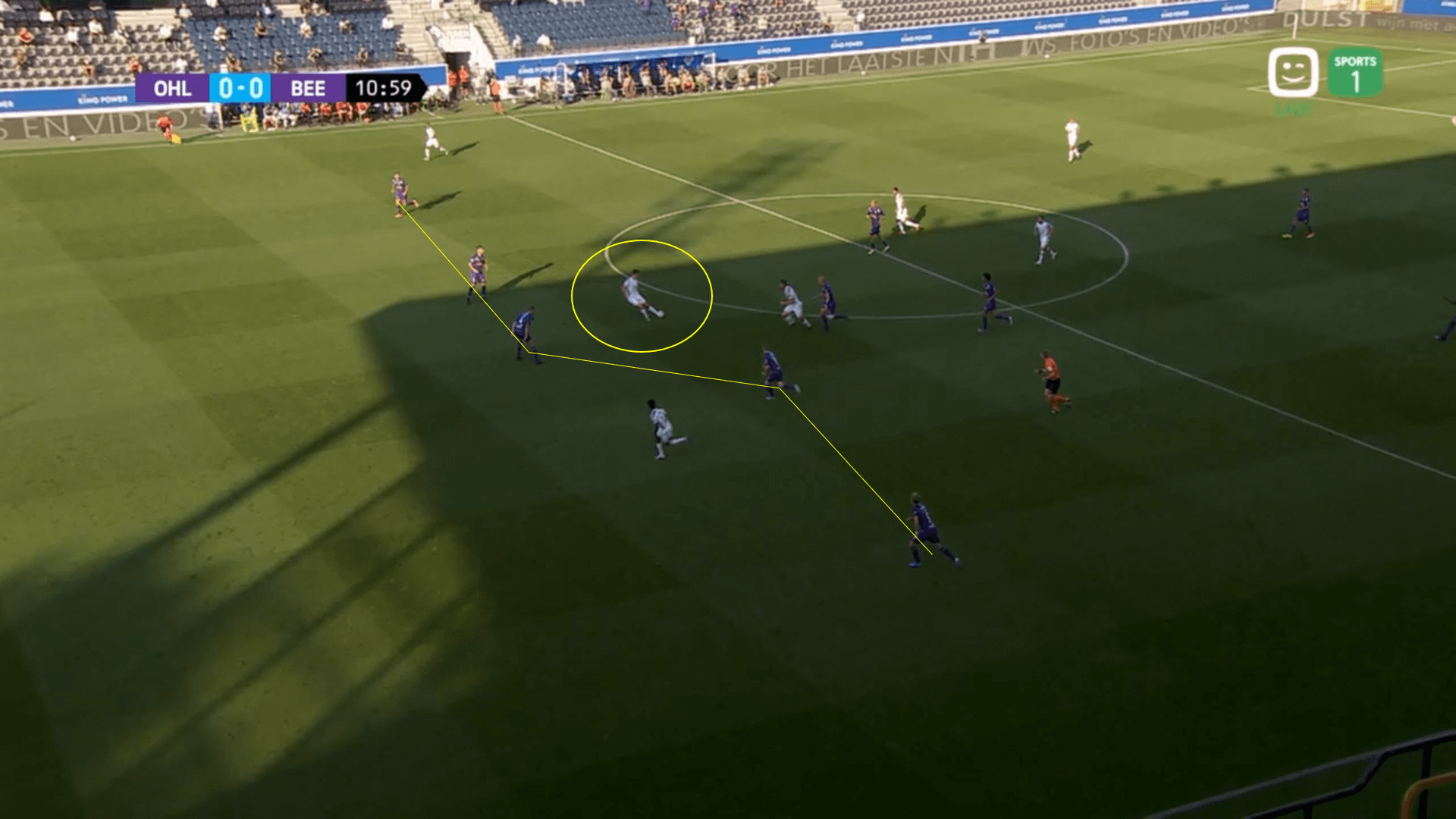 We also see how Duplus has pushed right up on the other side to provide width as an option. The back five of Beerschot has also been highlighted to show how they are sitting deeper, especially on the left-hand side, because of the tactic. The play itself was a counter to a breakdown in attack by Beerschot.

Without the same pressure of a winner-takes-all tie, Beerschot could be a little less conservative. In the first leg, once they scored, they sat deeper and forced Leuven to attempt to play through them. This involved bringing creative midfielder Raphael Holzhauser into a deeper position. Yet, in this game, they were happy for him to operate further forward, and not have to contribute as much on the defensive end. While he is by no means unhappy to do his defensive duties, Beerschot wanted him to be an outlet pass to begin attacks.

For example, we see in the below image that Holzhauser is not looking to drop deeper into the box to help deal with the potential cross. If the game had more riding on it, we may have seen him having to drop back deeper. Instead, he spent much of his defensive duties for this game in that area, willing to press when the ball was on the left-hand side, but not dropping too deep so he could remain an attacking outlet. 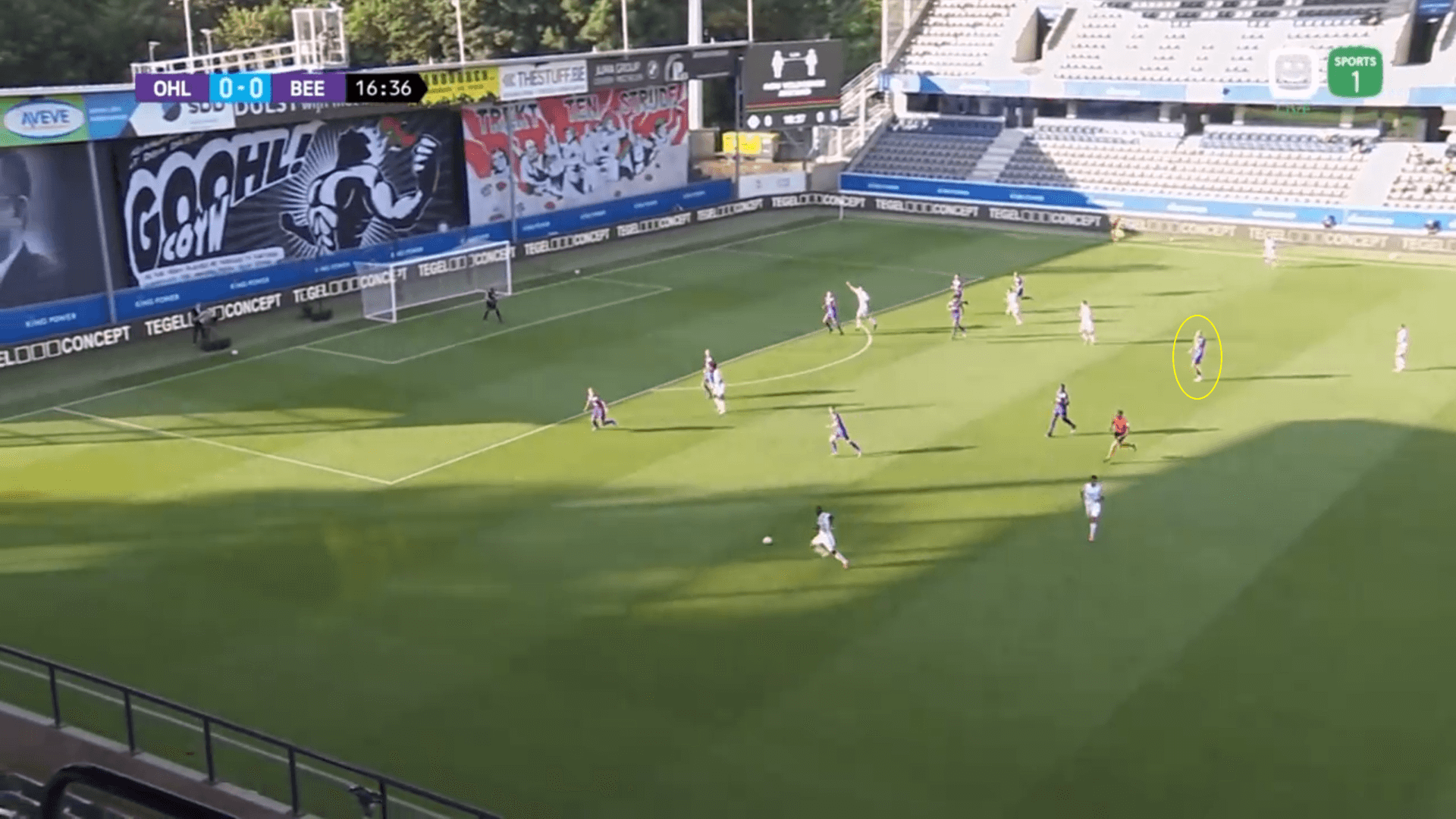 When we consider that it was on his defensive side that Maertens had left the flank and drifted inside, with Duplus pushing up, Beerschot were counting on Grisez to deal with Duplus in a one-on-one situation. Having five across the back, with the other two midfielders, meant that Beerschot had numbers in defence, while also wanting to use Holzhauser as a means to ensure Leuven had to be worried about what was happening defensively. It was the Austrian who had been instrumental in creating the only goal in the first leg, so Leuven couldn’t afford to leave him with too much space.

Again, below, we see Holzhauser pushed up high while Beerschot are on the ball. This is leaving one-on-one battles between the left-sided centre back and Maertens, or whoever takes up that right central position for Leuven. Grisez is also in a one-on-one battle now if Leuven get the ball and Duplus begins to run at him. 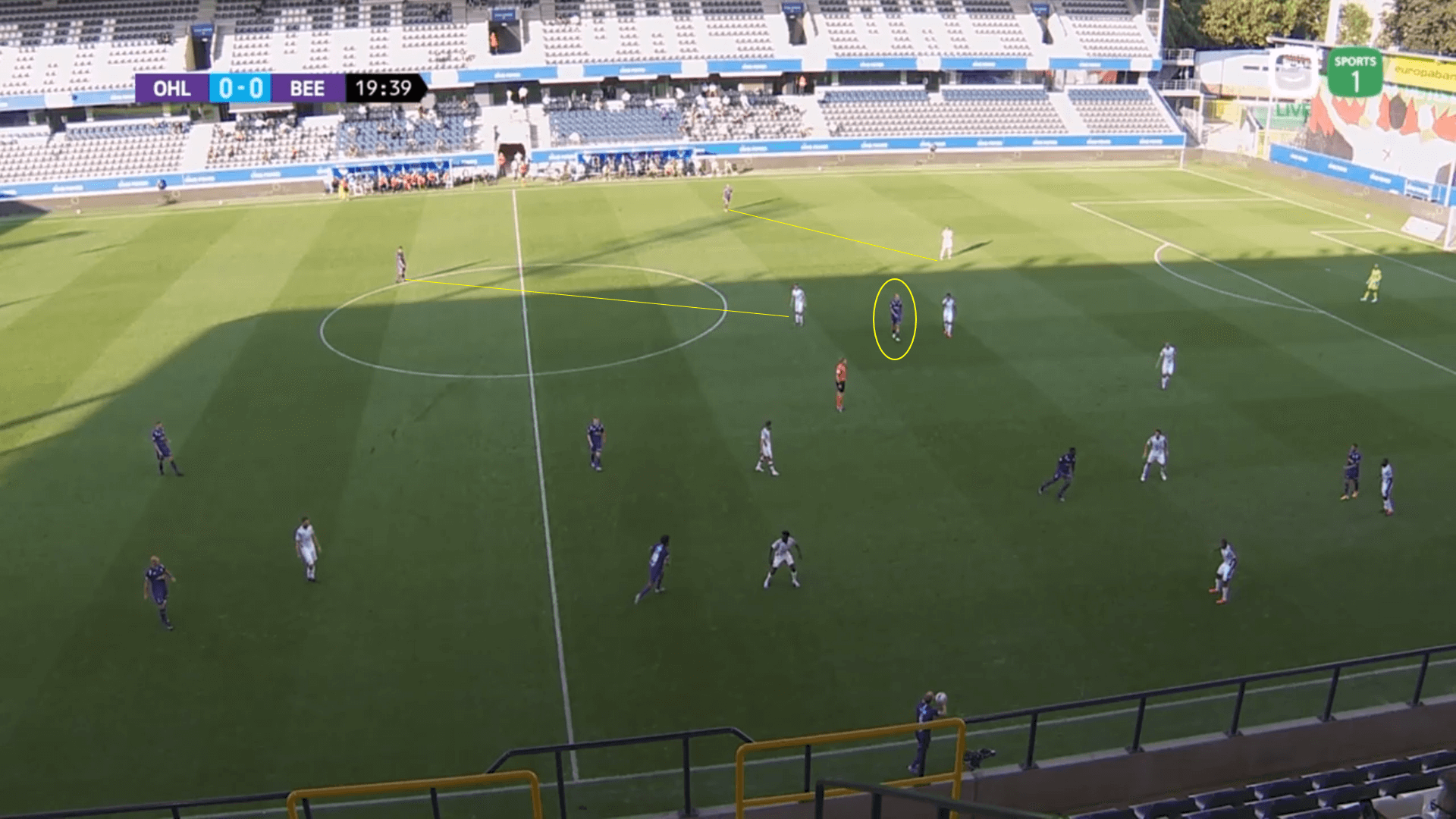 While this bravery is to be commended, Leuven did have the better of the chances in the first half. However, it was Beerschot who took a one goal lead thanks to an own goal from Kenneth Schuermans, which came from a Holzhauser corner.

Despite an even first half in which Leuven shaded the chances, Beerschot ended up adding three more goals in the second half. All of these second half goals came from attacks focused on their right, looking to exploit the left-hand side of the home side’s defence. Yannick Aguemon was taken off at half time, replaced by Stallone Limbombe on the left wing. Perhaps this change of personnel damaged the rhythm of the side, as, up until then, the left-hand side of Leuven’s defence had been solid.

What really helped Beerschot exploit the left-hand side was the movement of the strikers. Both Tissoudali and Noubissi are willing to run in behind. As a pair, they don’t always play off each other, but can instead look to stretch defenders and pull them out of position. For example, as we see below, when Sanusi gets on the ball, he has an option on either the right or the left, with the strikers both running in behind. Whoever gets the ball then has the other as an option to cross to. 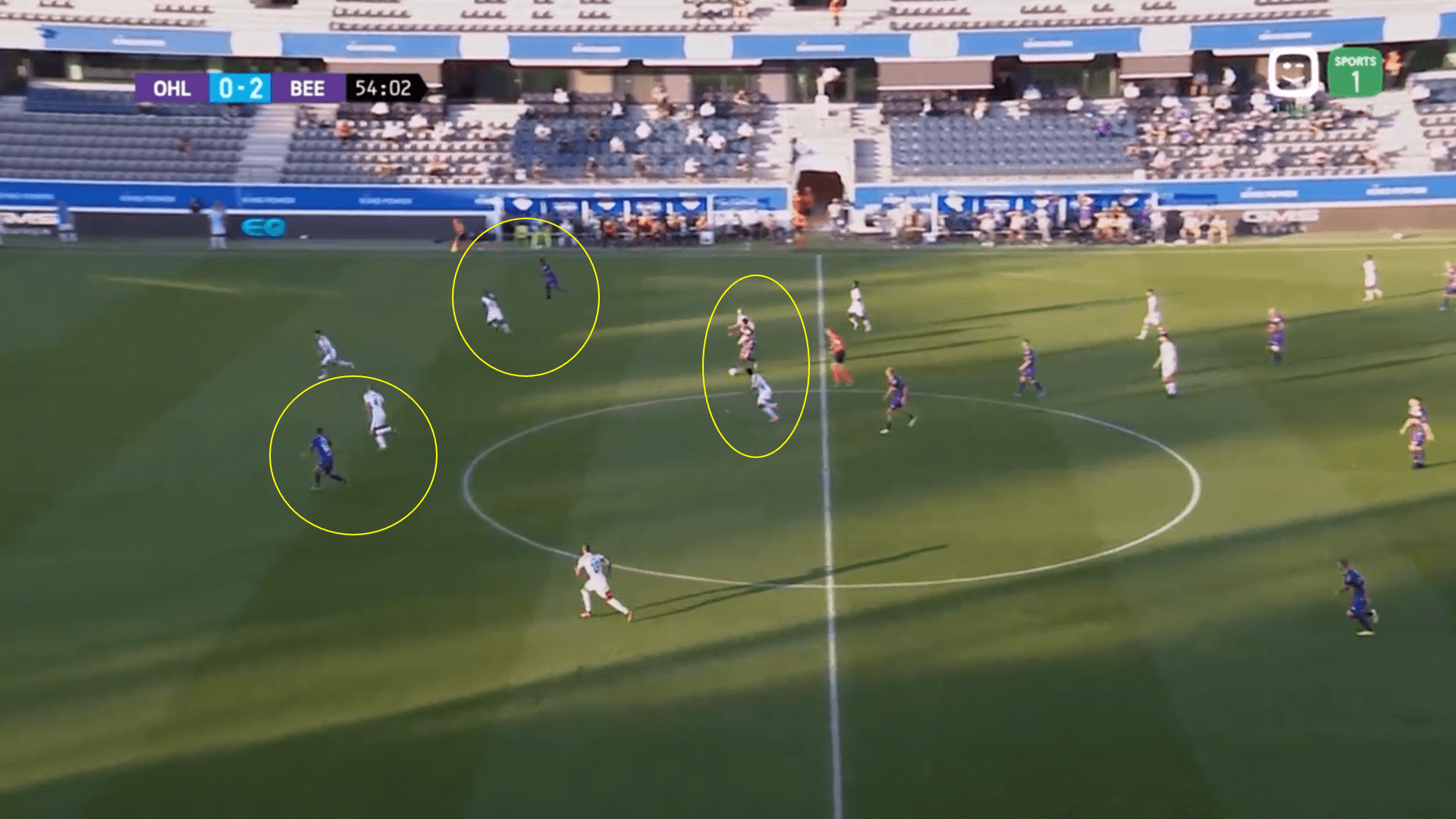 As the image above shows, Niboussi has moved onto the left-back of Leuven, which helps open up space for an attacking wing-back to overlap where possible. Furthermore, in transition, Noubissi drifted out to the right-hand side to provide Beerschot with width, as well as to isolate the defender. His skill as a dribbler meant that he backed himself to beat this man. Below is another example of how the strikers have stretched the defence. 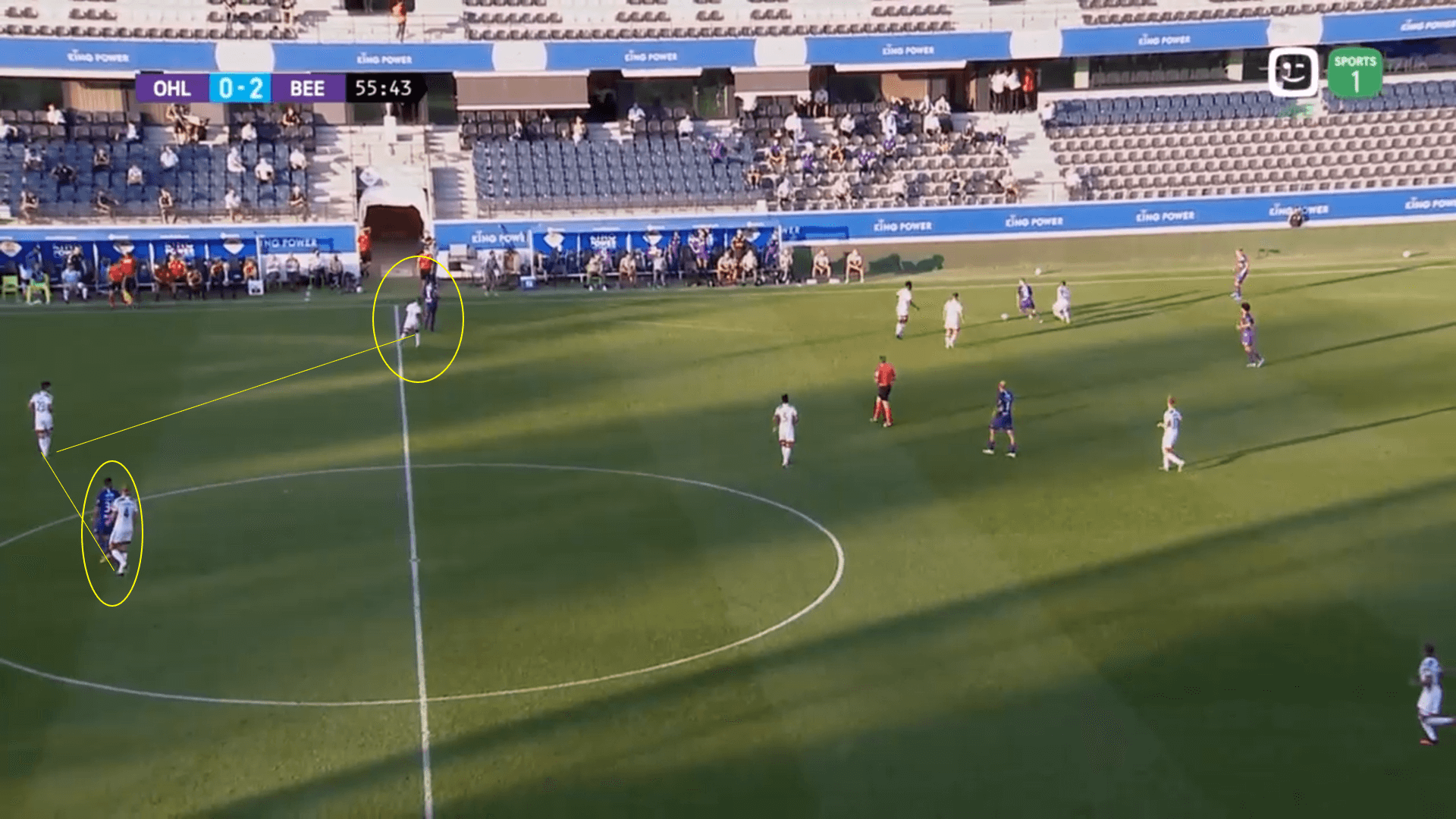 For his goal, we see Niboussi win the initial header on the right-hand side again. This time, Tissoudali has moved closer and created a huge gap to be exploited by his strike partner. Both strikers have pulled the defence out wide and created space, as the right centre back has failed to cover. 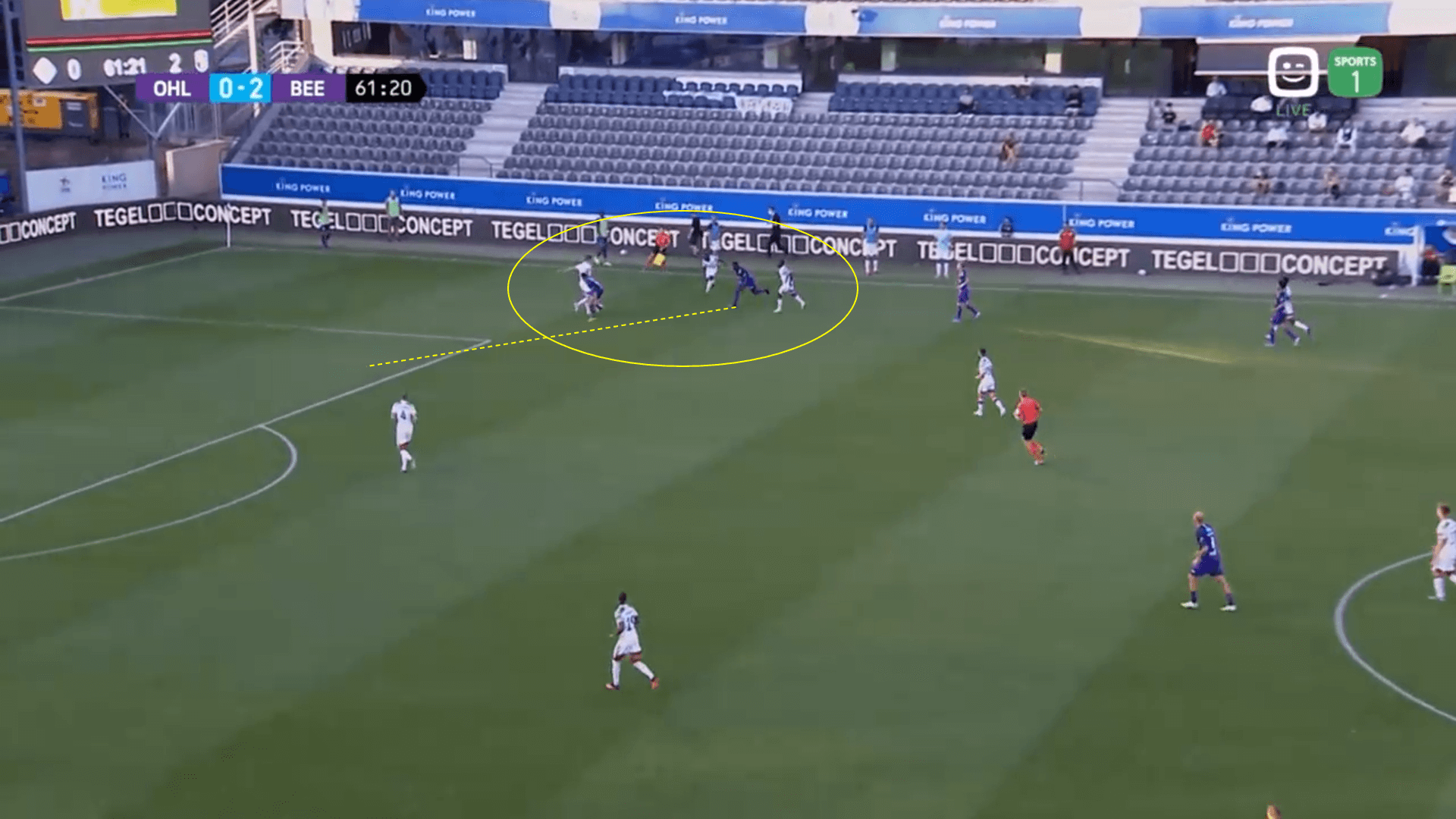 Now we see that Niboussi has plenty of space into which he can drive the ball, and with his dribbling ability, he easily beats the defender and finds the bottom corner. This effectively ended the game, with Beerschot being three goals to the good and fully in control. 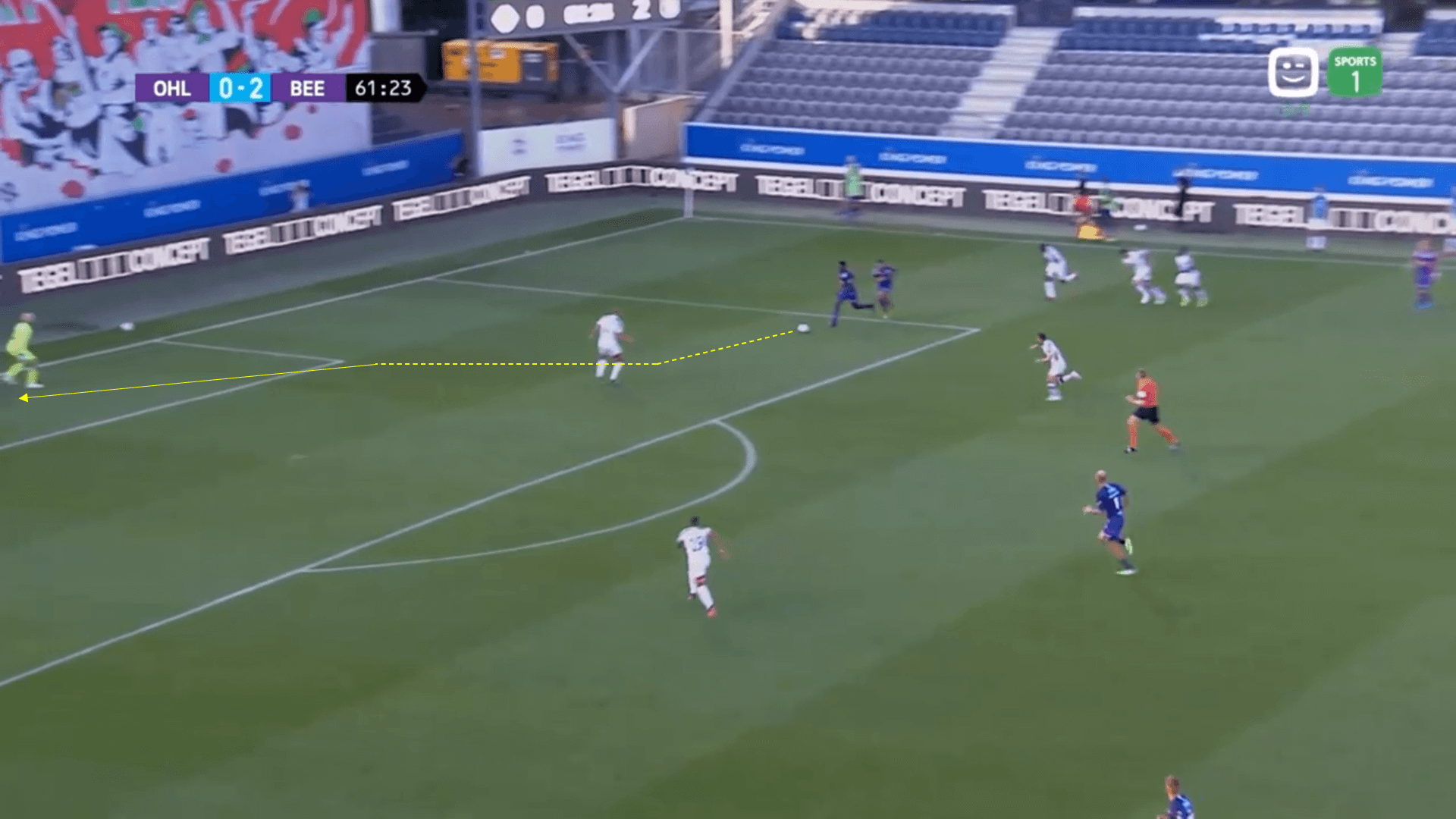 Over the two legs, Beerschot were tactically the better side. The adjustments made by Leuven in the second leg did not bring about the desired effect, as Beerschot were happy to gamble and still look for openings where possible. The movement of their strikers, alongside the freedom given to Holzhauser over both matches, proved to be the difference.

Leuven will be disappointed that their key players failed to have an impact on the game. However, they will also be thankful that promotion is already guaranteed and they will be playing in the Pro League next season. Based on this performance, they have plenty to work on in order to match up against the better sides. Beerschot, on the other hand, look like an exciting addition to the league, and coach Losada is definitely one to keep an eye on.