Belgian’s Pro League was one of the first to curtail the season after the advent of the COVID-19 crisis. Club Brugge were awarded the title and after a few meetings it was decided that the next season would constitute 18 teams, rather than the usual 16. The Pro League made its comeback this weekend, and there were plenty of intriguing match ups for the first day back.

One of these saw former EFL and EPL manager Paul Clement take charge of Cercle Brugge away to Standard Liege. While his side were on the receiving end of a 1-0 defeat, there were plenty of positives for Clement to take away. Last season, Cercle were languishing near the bottom of the table, so the side are looking for improvement this year.

Standard had a decent season last year, and will be looking to improve upon their fifth placed finish with new man Philippe Montanier in charge . Therefore, the opening round gave us a chance to see two teams with new managers at the helm.

This tactical analysis, in the form of a match report, will look at the tactics of both sides, and how Standard were able to win the game. This analysis will focus on how Standard used their full-backs to create width, how Cercle looked to press and then finally how the home side were able to grab the only goal of the game. 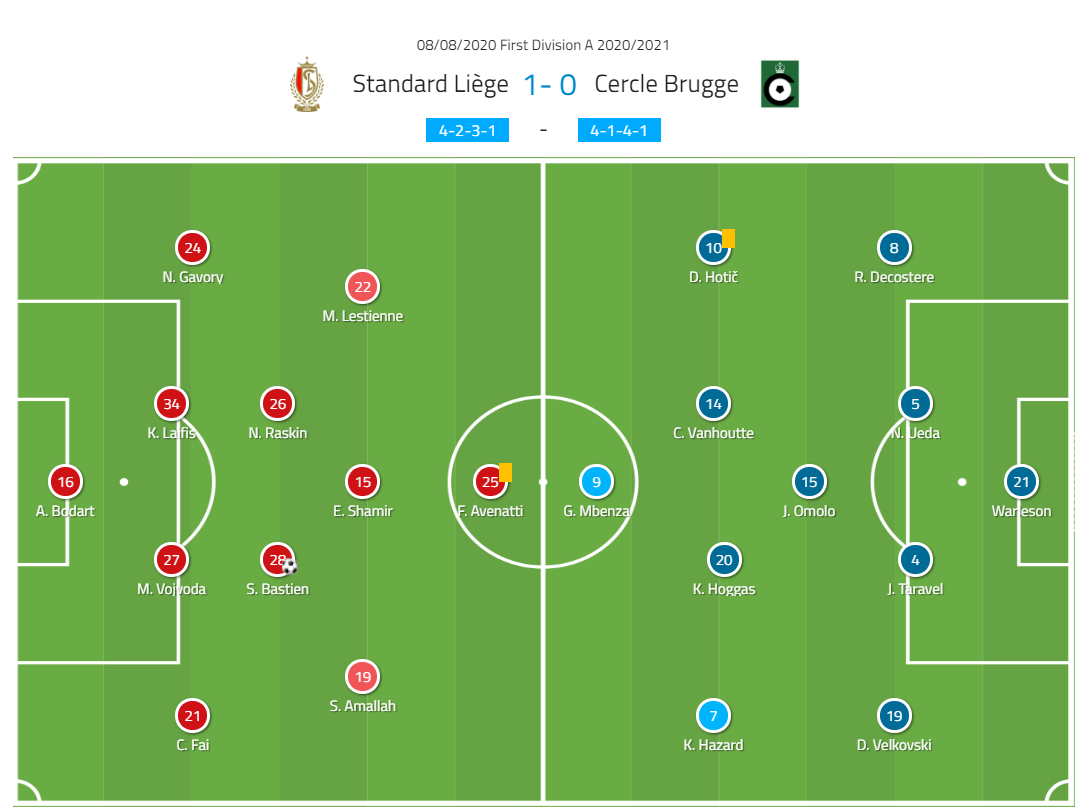 Montanier opted for his preferred 4-2-3-1 formation, with Arnaud Bodart between the sticks. The back four was made up of Collins Fai, Mergim Vojvoda, Konstantinos Lafis and Nicolas Gavory. The two in front of the defence were Samuel Bastien and Nicolas Raskin, with Selim Amallah and Maxime Lestienne out wide. Eden Shamir was operating in behind striker Felipe Avenatti.

For Clement’s Cercle side, he opted for a 4-1-4-1 formation. The very impressive 23 year old Brazilian Warlerson was in goal, while the back four was made up of Robbie Descostere at right-back, Dimitar Velkovski at left-back and a centre back partnership of Naomichi Ueda and Jeremy Taravel. The sitting midfielder was Johanna Omolo, with Kevin Hoggas and Charles Vanhoutte ahead of him. Kylian Hazard took up his position on the left wing, with Dino Hotic on the right. Guy Mbenza was the man leading the line for Cercle.

From early on in the game, it became clear that Standard were looking to get both full-backs pushing high up the field to provide the team with width. When in possession, the formation became more of a three at the back, with either Bastien or usually Raskin dropping in alongside the centre to be a passing option.

We see from the still below early in the game how high up Standard are, as well as how Fai on the right-hand side is providing plenty of width. Just off screen is Gavory, who is equally wide. Both players are being used in an attempt to draw Cercle out of their shape to create more space for the forward players. 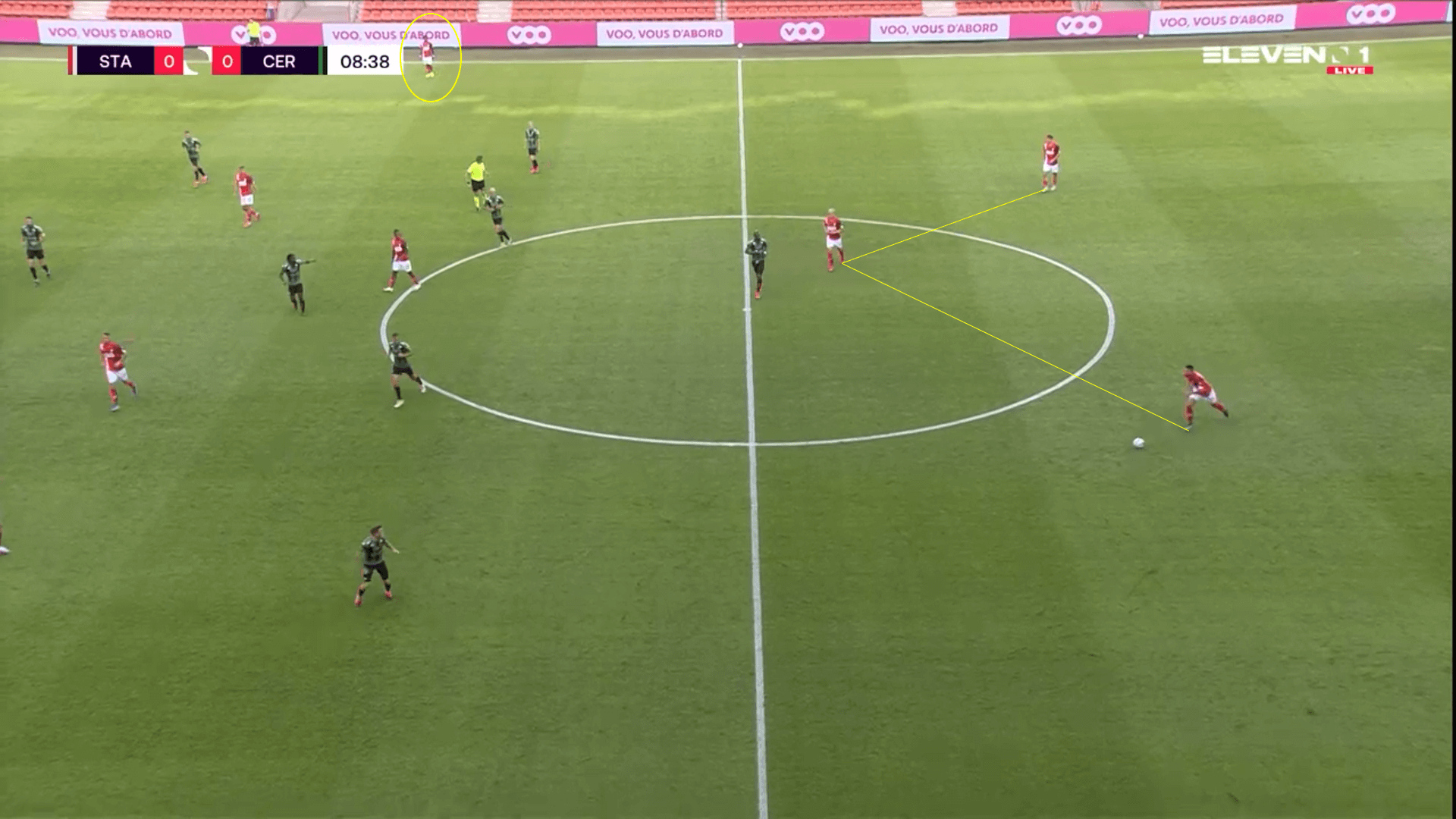 In the second image, we see where the forward players are operating. Both Amallah and Lestienne moved closer to Avenatti to ensure he didn’t get isolated, which in turn opened up the space outside as they drag the full-backs with them. Looking at the box below, we see the forward players operating within the width of the 18-yard box, meaning that Standard could isolate their full-backs onto the Cercle wingers, as there was plenty of space in behind them to exploit.

Furthermore, we see that Bastien is also moving forward to support, which he is able to do with Raskin playing deeper and providing defensive cover. This does make what appears to be quite a congested middle, but gives both full-backs plenty of space in which to operate. 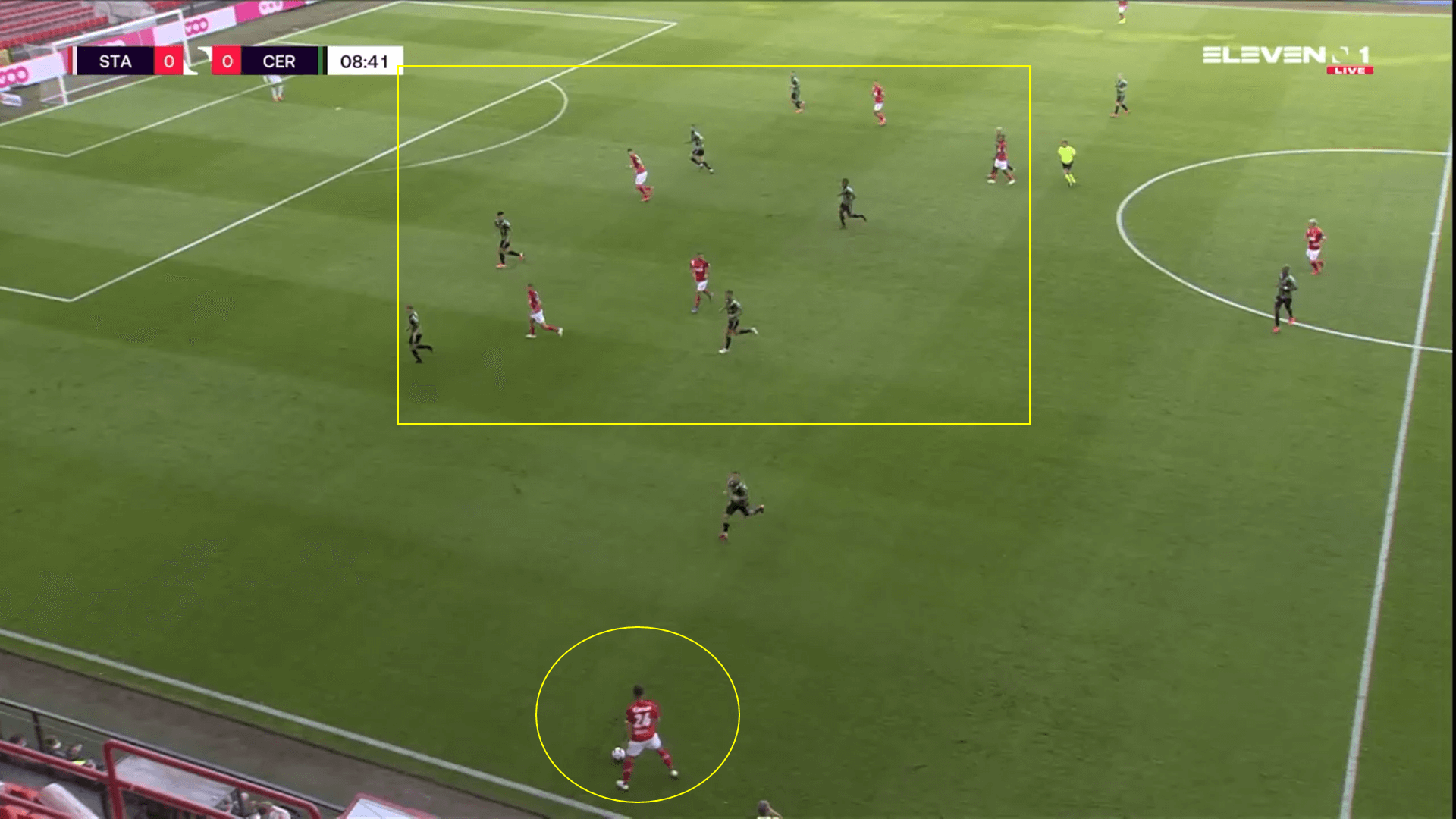 Defensively, Standard set up as a back four, and both full-backs sit in a more traditional position. It was when they were comfortably in possession that they would push far higher in order to create this space.

While at 0-0, Cercle were happy to sit in their defensive shape and not worry too much about the added width Standard were creating. Mbenza was always the furthest man forward, and, rather than pressing the centre backs, he would just sit on Raskin, as we see in the image below. For Cercle, the plan appeared to be to deny Raskin the ball and force the two centre-halves into building attacks themselves. 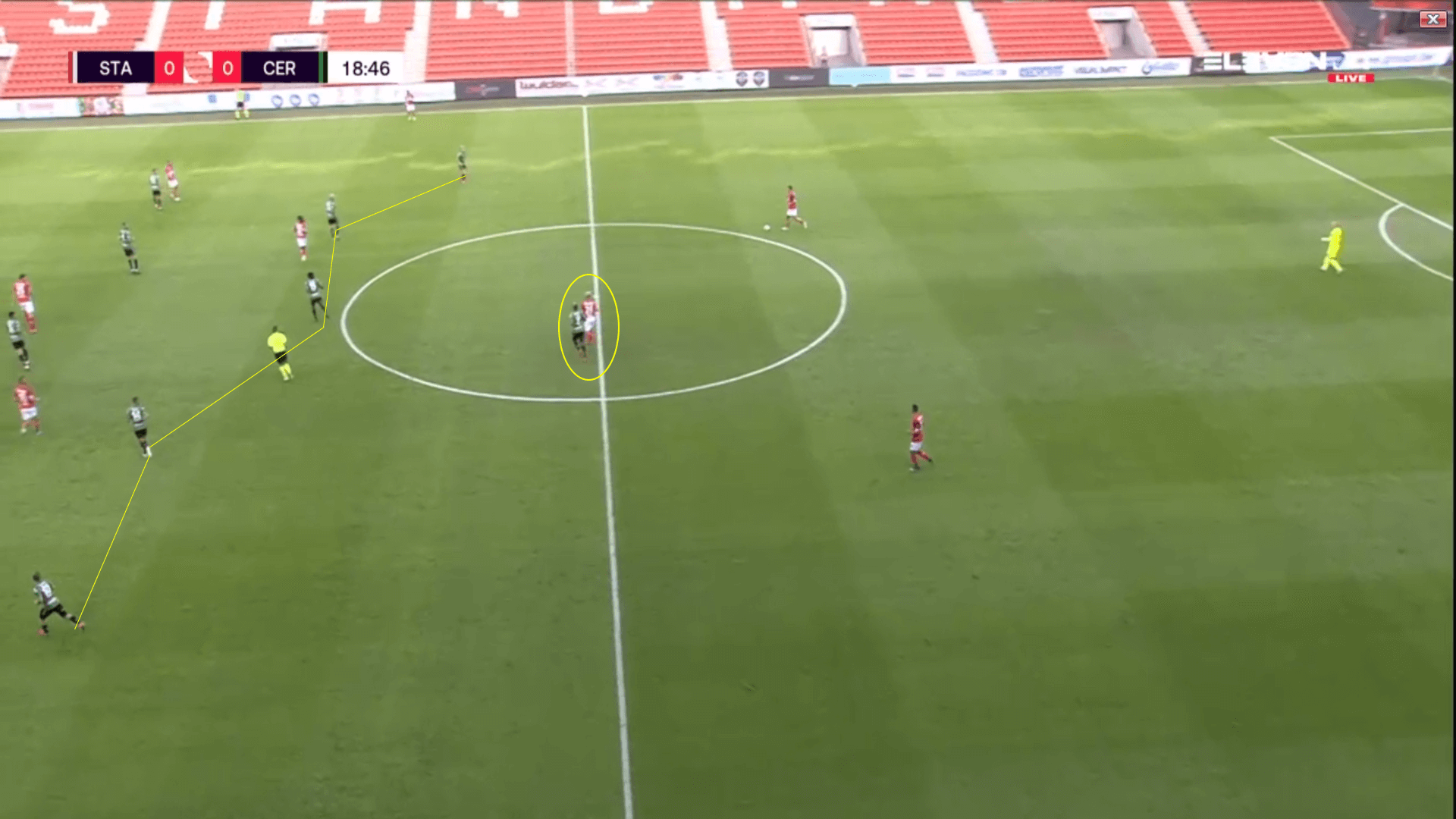 What this image also highlights is again how Cercle were looking to shield any passes into the middle players. They would press the ball in their own half, and the Cercle wingers would meet the full-backs when they had the ball, helping ensure that their own full-backs weren’t overloaded.

This led to a lot of side to side movement, especially in the first half, from Standard. Their centre backs had the majority of the ball while Cercle sat, allowing them to move it wide before then applying the press. However, when they did manage an attack and the ball went out for a goal kick, they looked to really push higher up and press the home side. 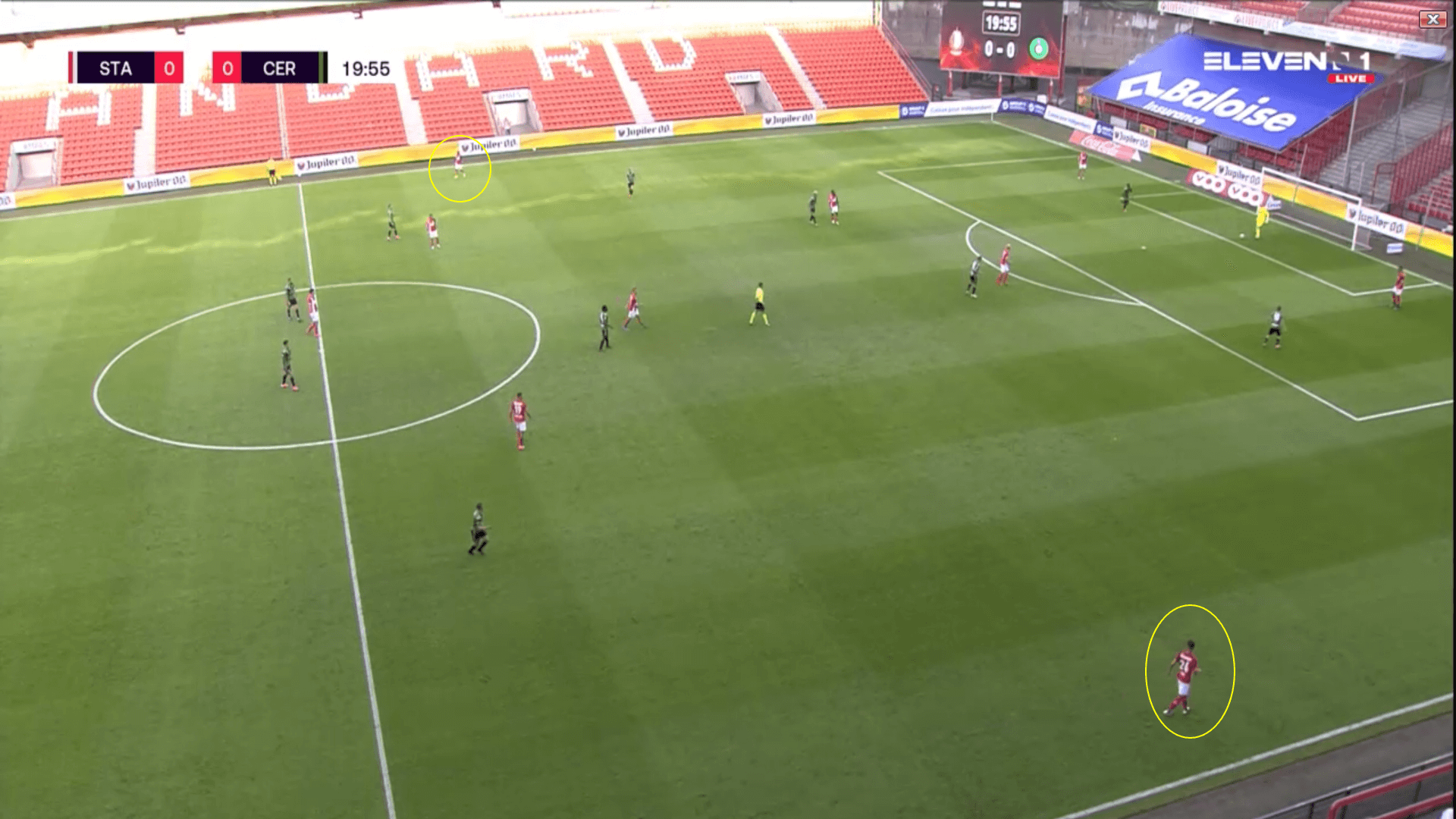 This is where Standard’s use of their full-backs helped them, as they could really push these players wide and high up the pitch, and they were often an outlet from goal-kicks and relieved some pressure. For Cercle, this was clearly an area they targeted pre-match. Clement’s side were looking to force Standard into going long, as they had the advantage when it came to their defenders’ aerial ability. Standard on the most part were happy to play it out, but, when they did go long, it allowed Cercle to win it back and then be in a better position, as they already had players deep into the opposition’s half.

Cercle were happy to allow Standard to dominate possession in the match, ending up with a 52% to 42% split in favour of the home side. However, they were still very much in the game, and able to create 38 attacks for themselves. Standard, on the other hand, managed 42, with 12 of these bringing about shots. Cercle were certainly indebted to goalkeeper Warlerson, who pulled off a string of fantastic saves to end the match with 6.

Unfortunately for the Brazilian shot-stopper, it was Bastien who was able to find the way through. The goal itself was the second phase from a cleared corner, however the corner itself was won because of the tactics of Standard. It was Fai on the right side of the pitch who had pushed up, and his deflected cross led to the corner. 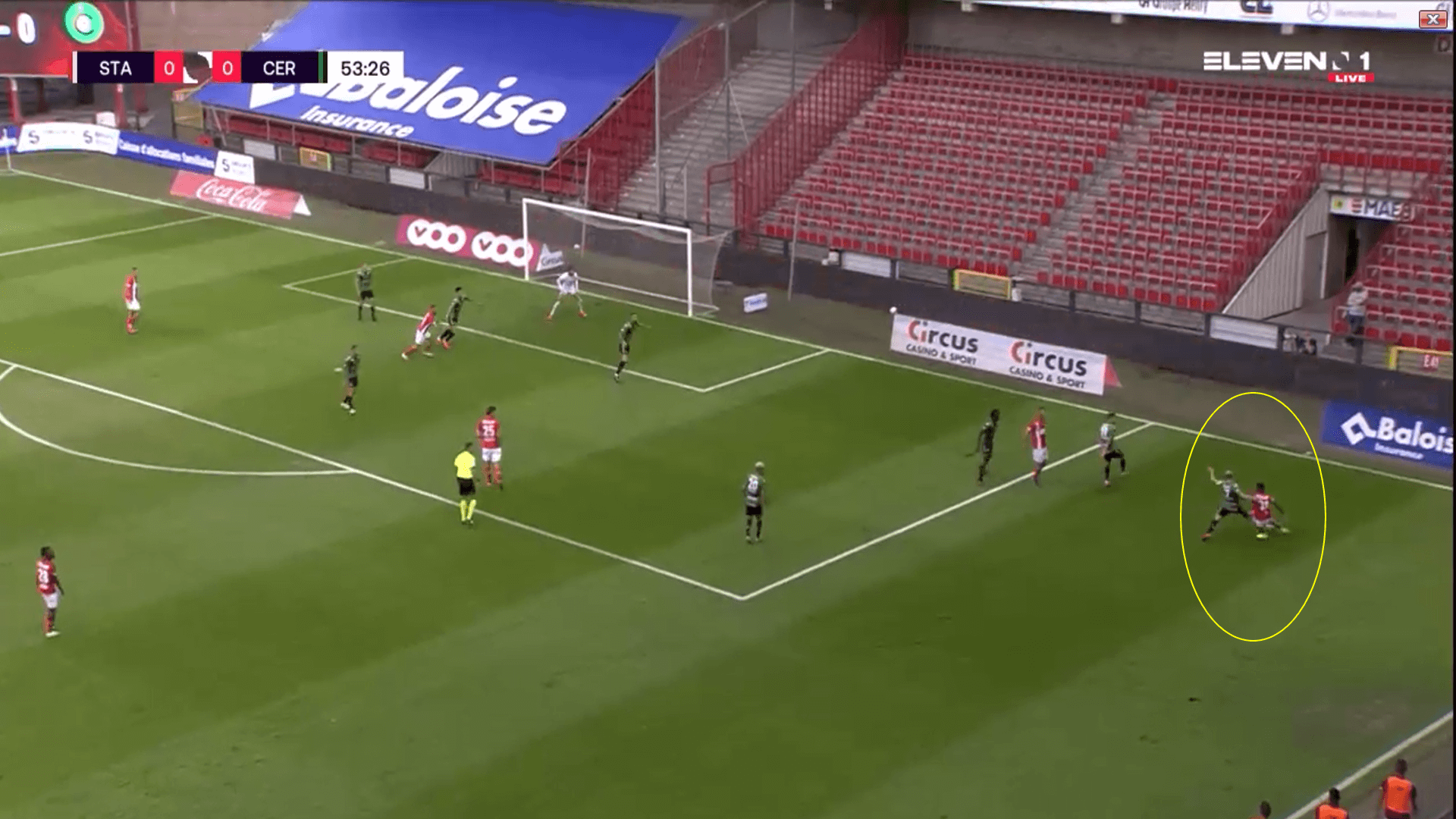 Cercle brought all of their players back, which in hindsight proved to be a mistake. As we see from the still below, when Raskin gets the ball from the clearance, there is no Cercle player close enough to him that can close him down. He has plenty of time to create a second attack, with plenty of options, as most of Standard’s players had pushed forward. 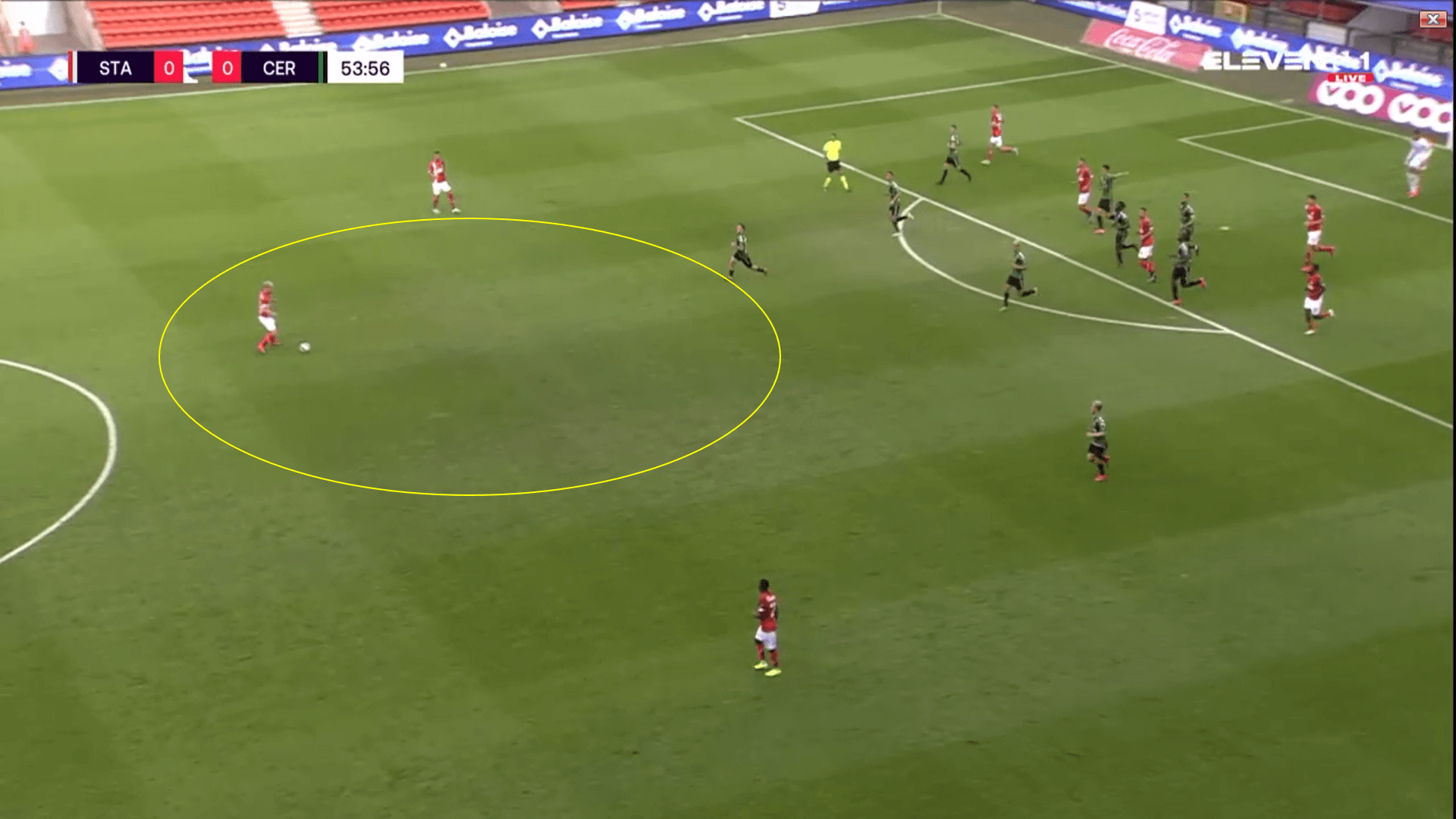 Cercle are too slow to react, and allow the corner taker to drift back inside. Raskin has the passing ability to find the runner, and now we see that the situation is very dangerous for Cercle. Due to not having anyone further forward, there is no organisation of who is going to push up to press Raskin. This leads to too many Cercle players moving forward, leaving plenty of space behind them. Bastien, who is highlighted, is able to easily drift into the space, receiving the pass and finding the net. 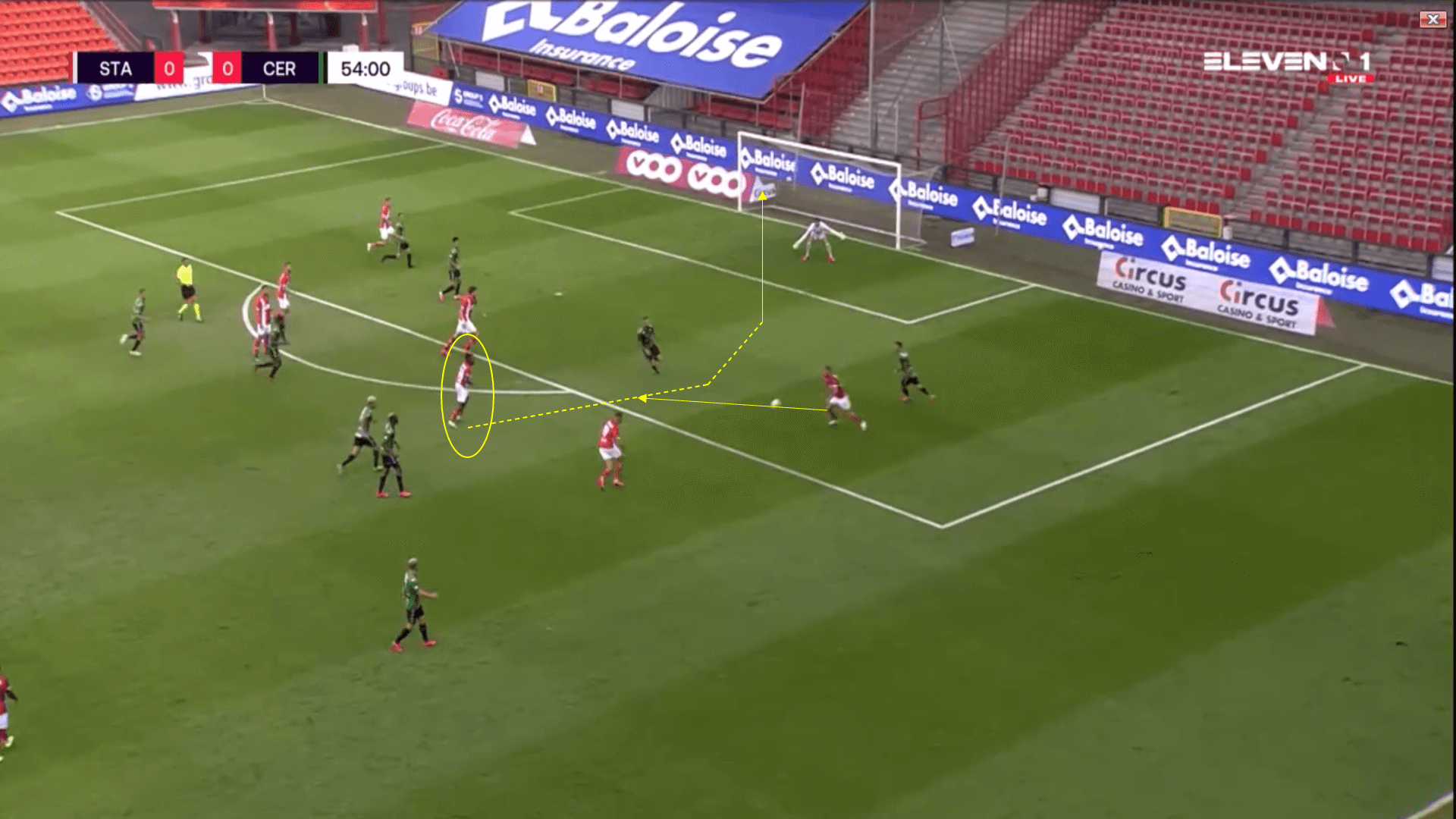 Conceding from a set-piece that they had initially cleared will frustrate Cercle and Clement. It will be interesting to see if they persist with having all of their players back to defend corners after this goal, or if, for future matches, they leave a player up to be an outlet and put pressure on cleared corners.

Cercle pushed for an equaliser, but were unable to get back into the game. There were certainly plenty of positives for Clement and Cercle fans to take from this match, especially their defensive discipline, which helped to frustrate Standard. For Standard and Montanier, they will be more than happy to get three points on the board early against what will prove to be a difficult opponent for most.

Future Standard matches will certainly be worth watching to note how teams counter their high full-backs. Furthermore, against sides with better wingers, Standard may have to decide whether or not they can risk pushing them that high up, in case of getting caught out on the counter.