Royal Antwerp were one of the strongest sides in the Belgian Pro League during the 2019/20 season. The goals from former EPL striker with Hull and Norwich, Diermerci Mbokani, were a crucial factor in their finishing fourth overall and qualifying for the Europa League next season. One player who was really impressive was young Cameroonian winger Didier Lamkel Zé. Zé was formally part of Ligue 1 side Lille’s academy, before a spell in the second division of France lead to his transfer to Antwerp.

This season Zé has really blossomed at Antwerp and was rewarded with a first call up to the Cameroonian national team. At only 23 years of age, he has had plenty of controversy in his career, including a couple of training ground incidents. Clearly a bit of a maverick, Zé is certainly entertaining on and off the pitch.

This tactical analysis, in the form of a scout report, will take a deeper look at the charismatic Cameroonian. This analysis will focus on the strengths of the winger, how he played in the tactics deployed by Antwerp, as well as looking at an area he needs to improve going into next season. With a new coach arriving in the city, Zé will hope that his performances in 2019/20 will convince the new manager Ivan Leko to continue to play him.

In 2018/19 Zé only managed one solitary goal in the Pro League from his 18 appearances. This year he has managed six, a vast improvement on the previous season. He has exceeded his 4.66 xG and is averaging 0.25 goals per 90. He ranks fifth in terms of goals scored when we compare him to other players who play in his position. Taking more shots has resulted in this improvement. Zé has taken 50 shots this season, at an average of 2.12 per game and an xG per shot of 0.09.

What helps Zé to score as many goals as he has is getting in the box often. As we see from the graphic below, all but one of his goals have come from inside the penalty area. He takes most of his shots in the penalty area, with an xG of 5.33 and a goal conversion of 16.2%. Furthermore, Zé is certainly comfortable shooting with either foot. While 44 of his shots this season have been with his right foot, he has managed to score two goals from his 18 left footed shots. 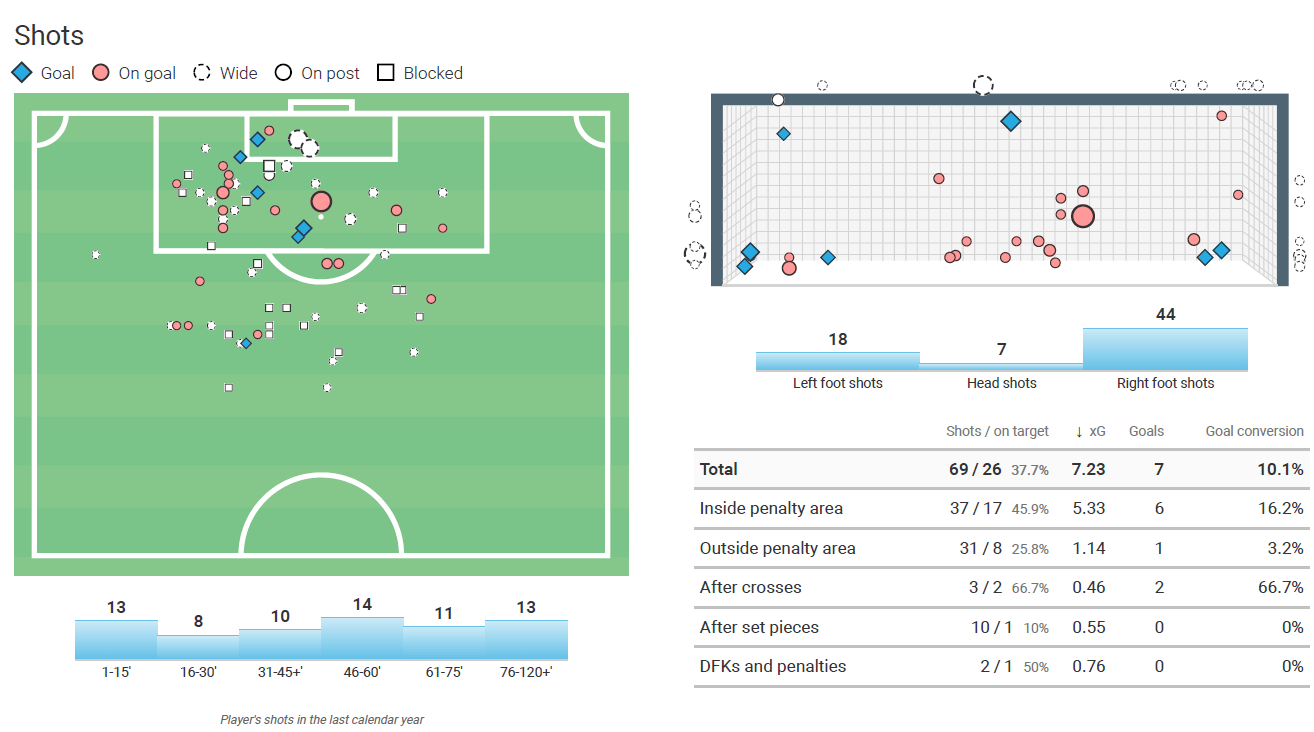 It is clear that the Antwerp management have persuaded Zé to get on the end of deep crosses. What helps this is that clearly Zé reads the game well to judge where to get to in order to score goals. For example, in the game against lowly Waasland-Beveren, we see Zé highlighted below at the top of the image while the ball is being worked into a crossing position on the right-hand side. 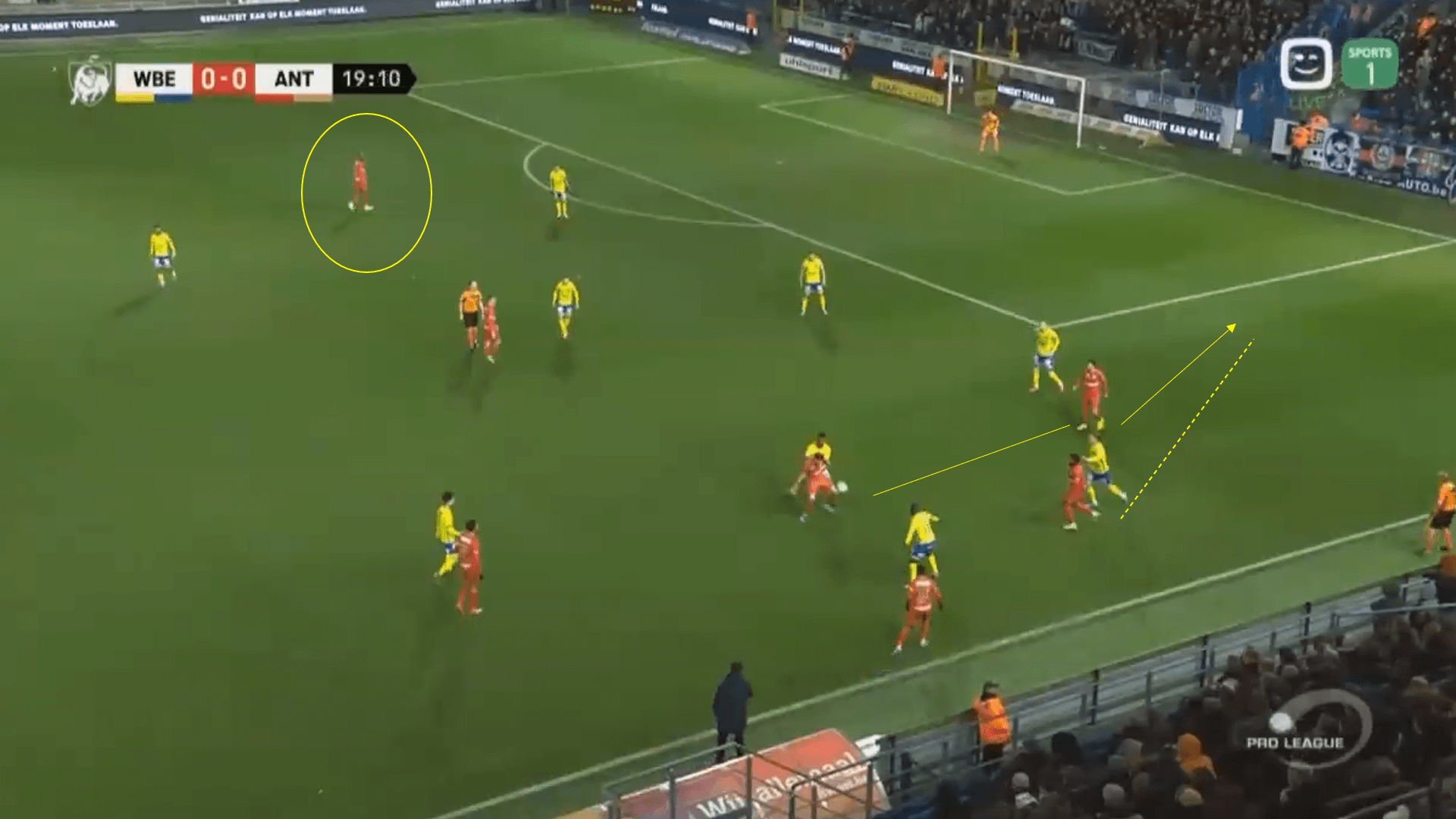 In this next image we see that Zé remained behind the defender, rather than attempting to get in front of him. This gives him the chance to react to the cross that has come in, clearly aimed for the other Antwerp player in the middle. Instead, it is hit too quickly for him and reaches the back post. The defender isn’t in a position to react, whereas Zé, being behind him, has seen the play progressing and is able to meet the ball at the back post. 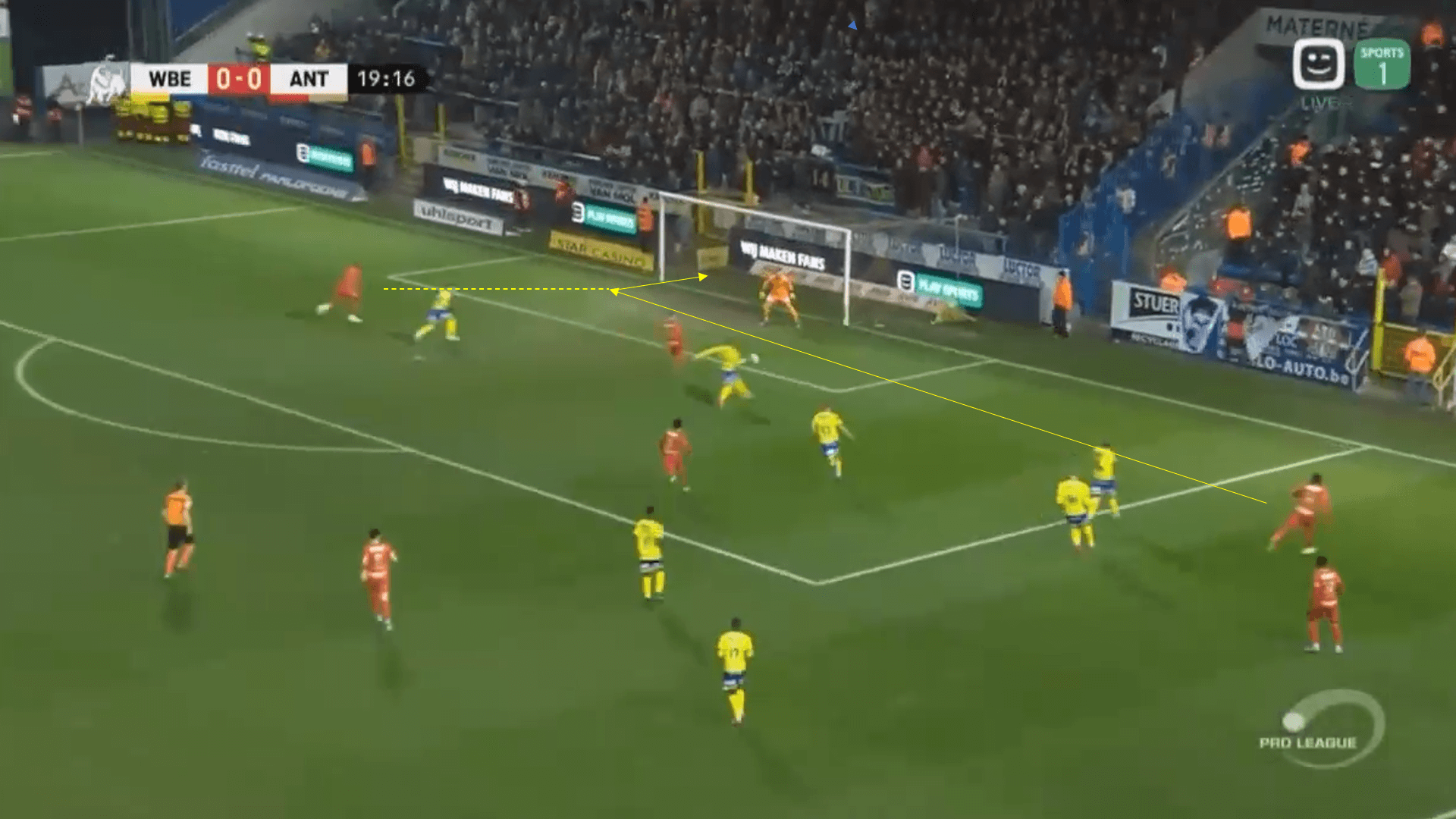 With Antwerp predominantly operating with Mbokani as a lone striker, it is important that players like Zé get into the box to support the front man. Six goals in the league by the Cameroonian winger certainly suggests this tactic has worked and has really helped him improve his output in this area.

Being able to score with either foot also helps Zé, in that it makes defending him far more difficult. As a left winger, it allows him to go on the outside or the inside. Furthermore, when we factor in his composure, we should certainly expect Zé to add to his goal tally in the years to come.

Another example to highlight this comes from the game against Cercle Brugge. In the image below, we see that Zé is in a great position with a defender coming to cover. Ideally, we would think that Zé would drive into the box and hit a shot with his left foot. The defender certainly appears to favour this option over allowing the winger to cut in on his right foot. 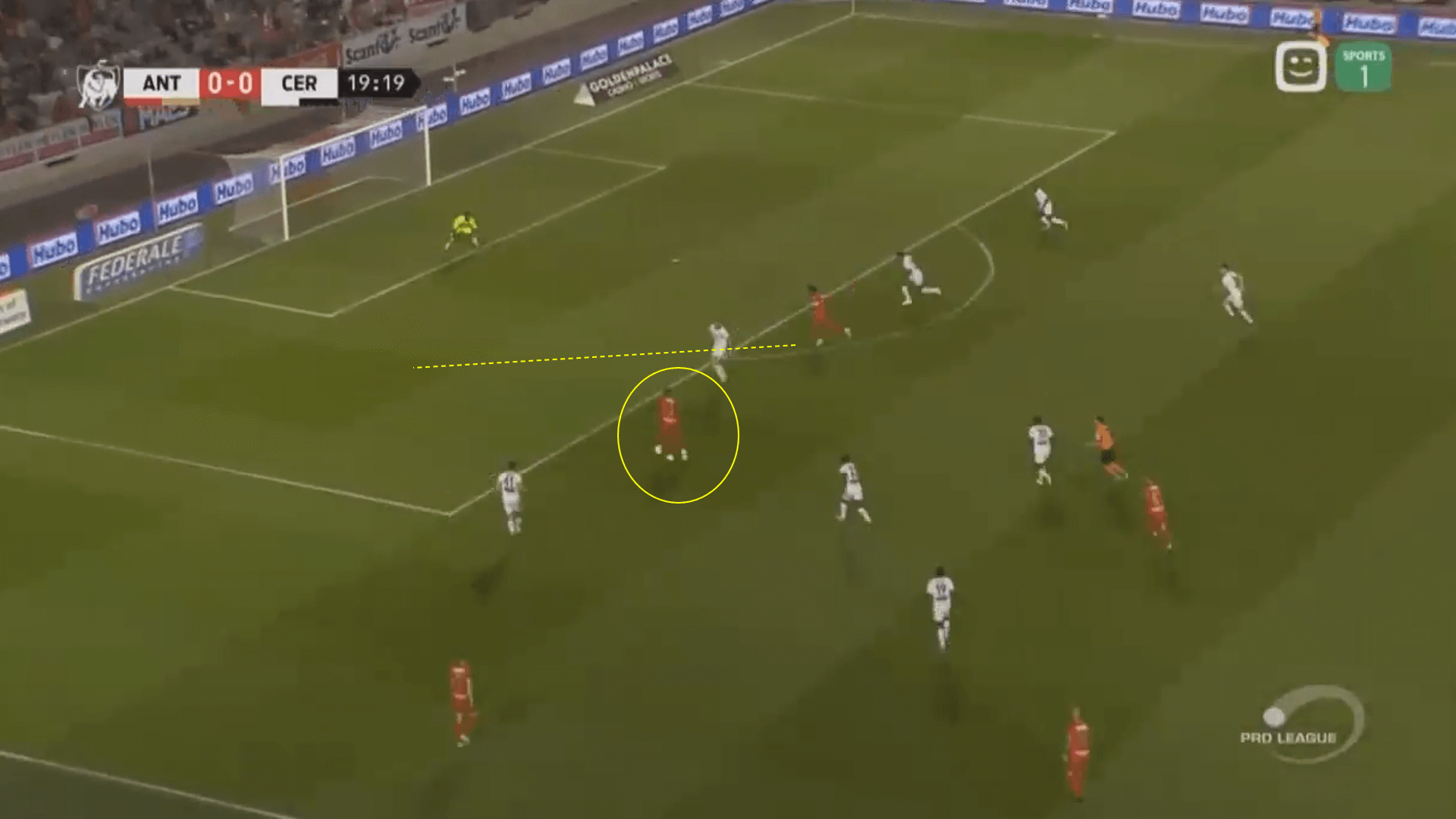 Yet, Mbokani is making a run into that space. The striker knows that while Zé can certainly shoot with his left foot, he is stronger on his right. Mbokani’s run takes that space and allows Zé to shift back inside onto his right foot. He remains composed despite now facing two defenders, using his right foot to fire the ball home. 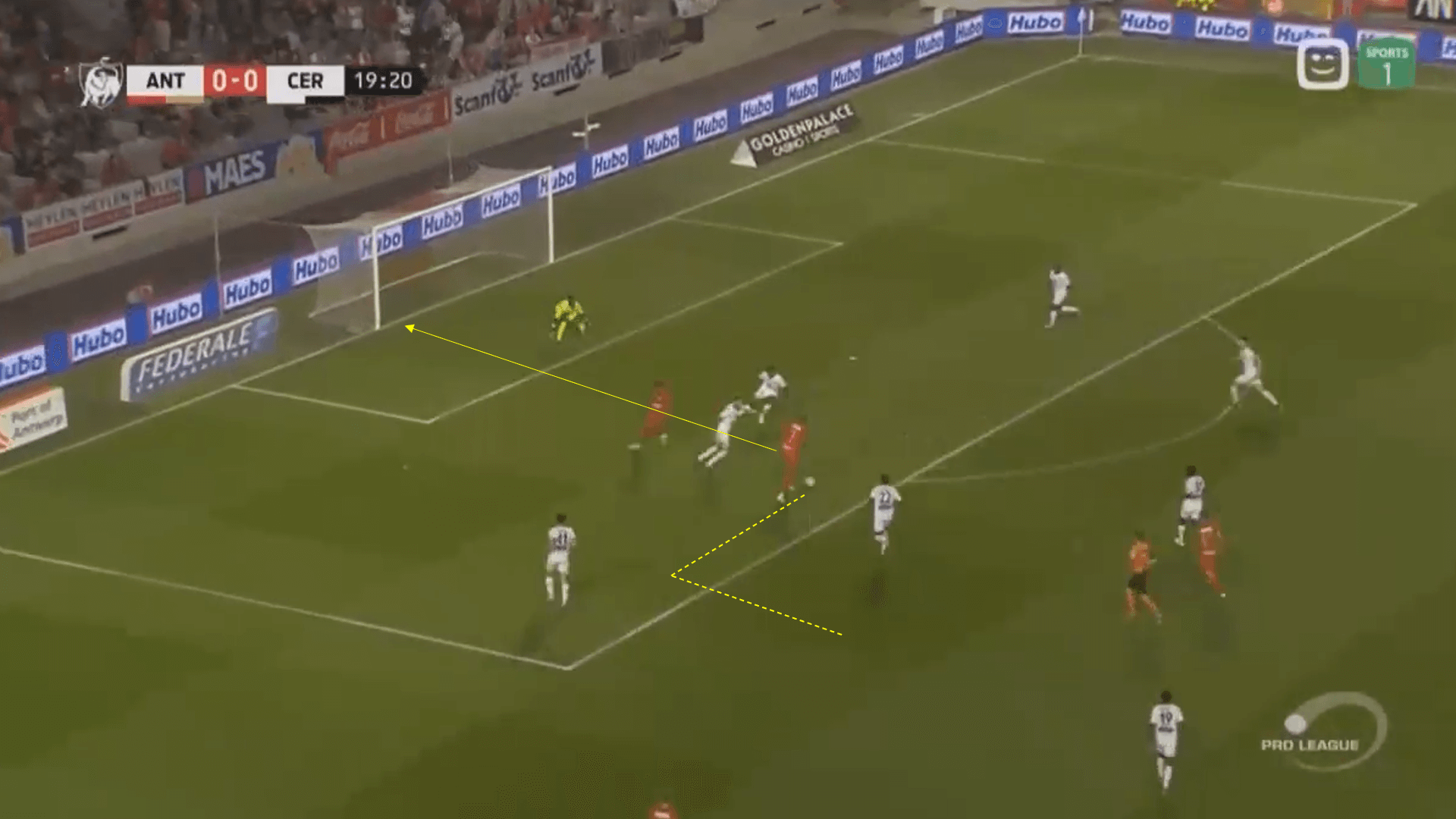 Zé is a good finisher and this season he has really excelled in adding goals to his game. Antwerp should push him to get at least 10 next season, given the improvement we have seen from him in this area.

Where Zé also excels in is progressing the ball. He is one of the top players in the league for ball progressive runs, with 4.45 per 90 and an average progression of 122.63 metres, the highest in the league for a winger. For Antwerp, Zé’s ability to progress the ball allows them to transition from attack to defence without having to use passing moves. Instead, they can rely on the directness of Zé to drag the side up the field.

For example, we see in the game against K.V Kortrijk that Zé has picked the ball up following an overhit cross by the home side. He is on the edge of his box and found himself in this position more than once. Rather than looking for a pass or just clearing the ball, Zé is determined to drive the ball forward. 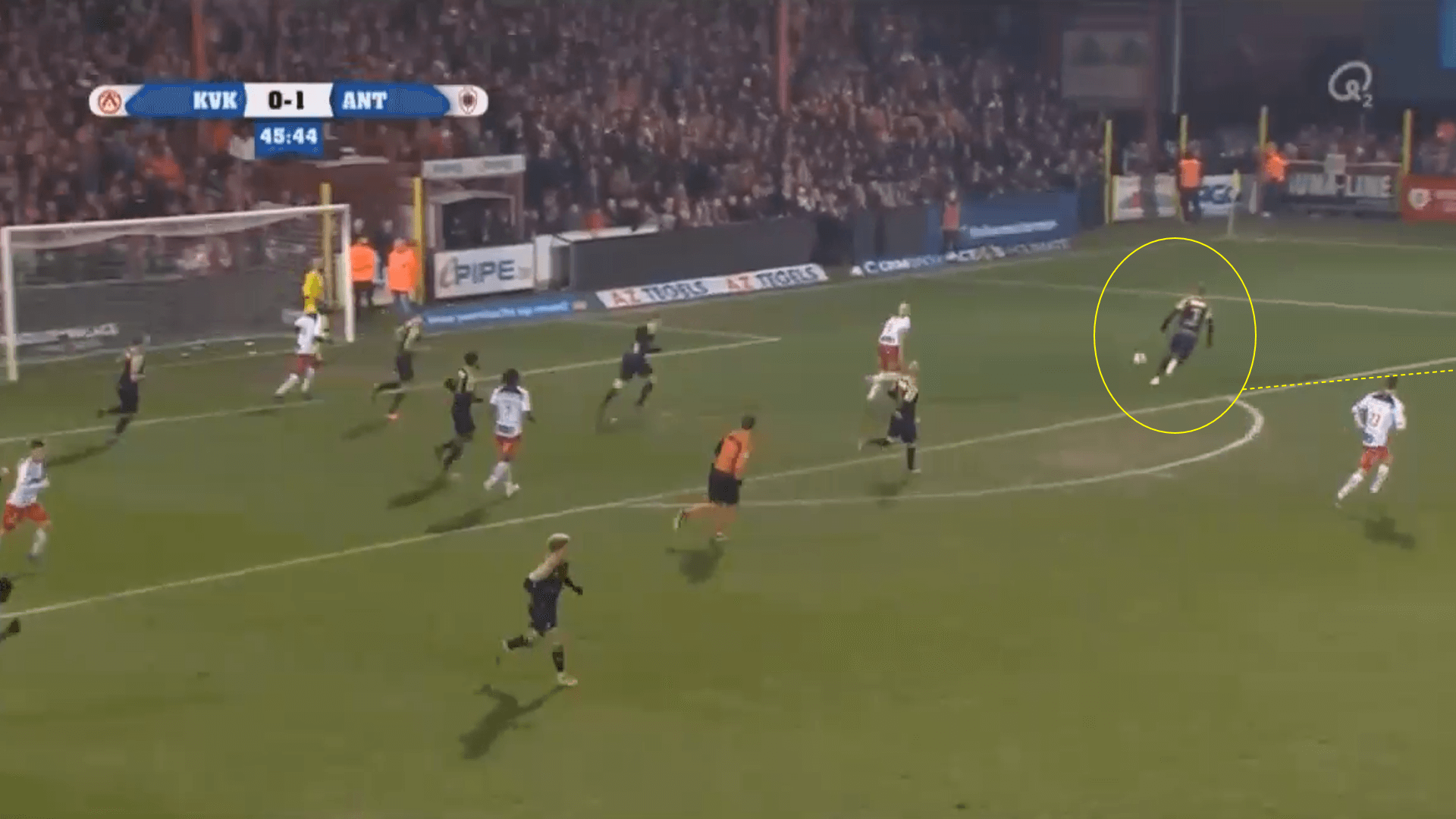 In the second image, we see that Zé has managed to push right up to the halfway line before running the ball out of play. We see in this situation that instead of focusing just on the dribble, if Zé had looked up there were plenty of options in the middle which may well have led to a goal if he had managed to make the pass. 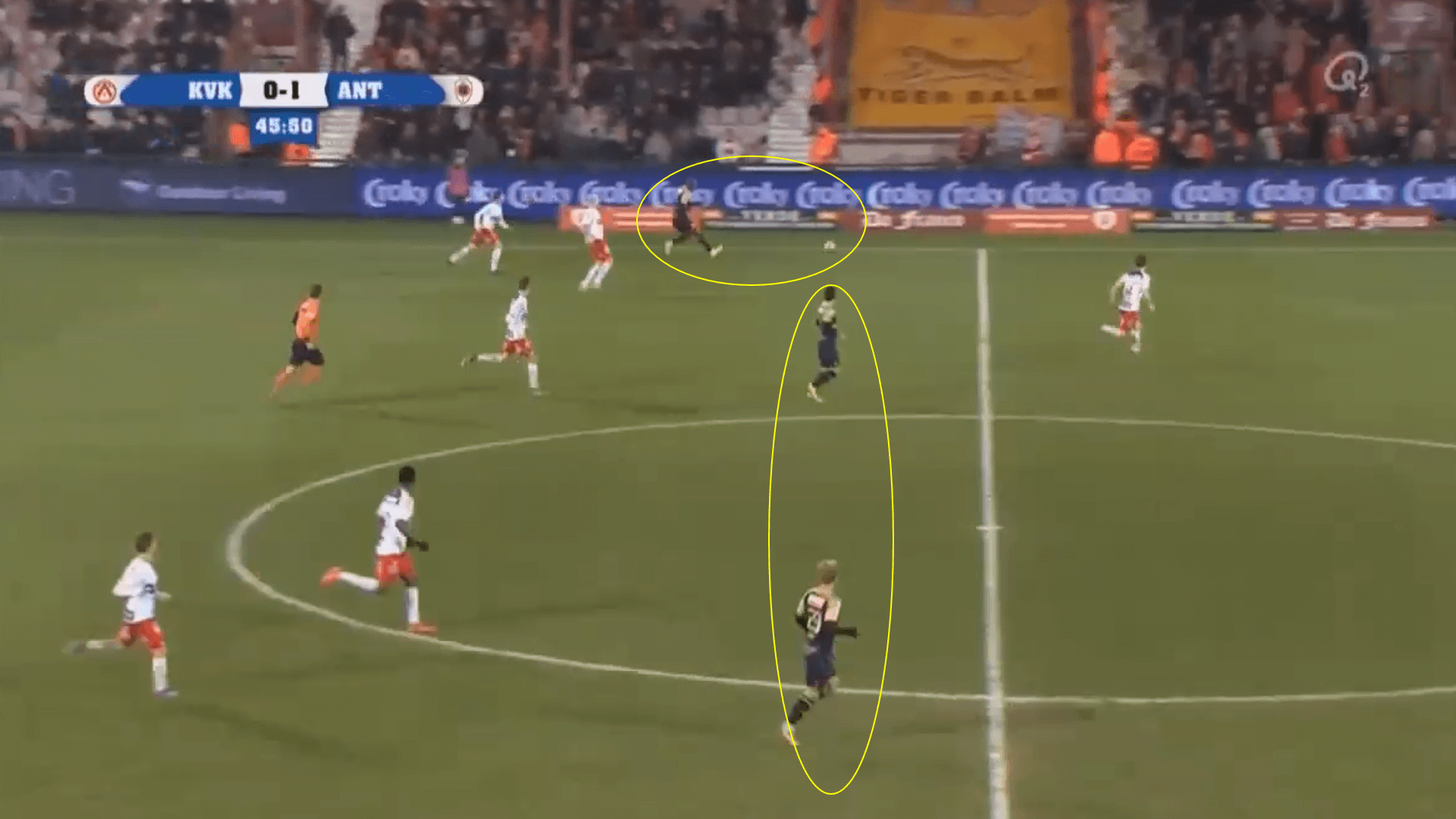 Looking at the wider data, we see from the below graphic that Zé, when picking the ball up just inside his own half is a very determined runner but is also willing to progress the ball with passes. Alongside his ball progression as a dribbler, he makes 6.35 progressive passes on average per 90 alongside an average progression of 132.87. When we combine the two, after a progressive run he has a 34.1% passing accuracy. Yet, when not passing, he lost the ball 50.8% of the time, following a progressive run.

From the graphic below, we can see by the dark black arrows that Zé really helps progress the side. He is focused on getting wide and running deep in order to supply crosses. The next section will focus on Zé as a crosser of the ball.

Despite only having one assist this season, Zé is one of the highest producers of crosses in the Pro League for his position. The Cameroonian averages 3.64 per 90, putting him solidly in the top 10 in the data. However, his accuracy is only 26.74%, so this is clearly an area he needs to work on. With Mbokani as a striker, given he finished joint top scorer in the league, you would expect a winger like Zé to have assisted more of these goals. This is even more of an intriguing situation when we consider how often Zé is crossing the ball.

One pattern that seems to follow Zé’s crossing is overhitting. There were plenty of times in the game against KV Oostende where he had enough time to weigh up the cross. In this first example, we see that Antwerp are on a counter-attack, with Zé once again in charge of progressing the ball forward. There is enough distance between Zé and the defender for him to make a decision and weigh up the cross. In terms of options, we see that Mbokani is shaping to run across the front of the defender, like all top strikers would, rather than allowing himself to be squeezed in between the two defenders. 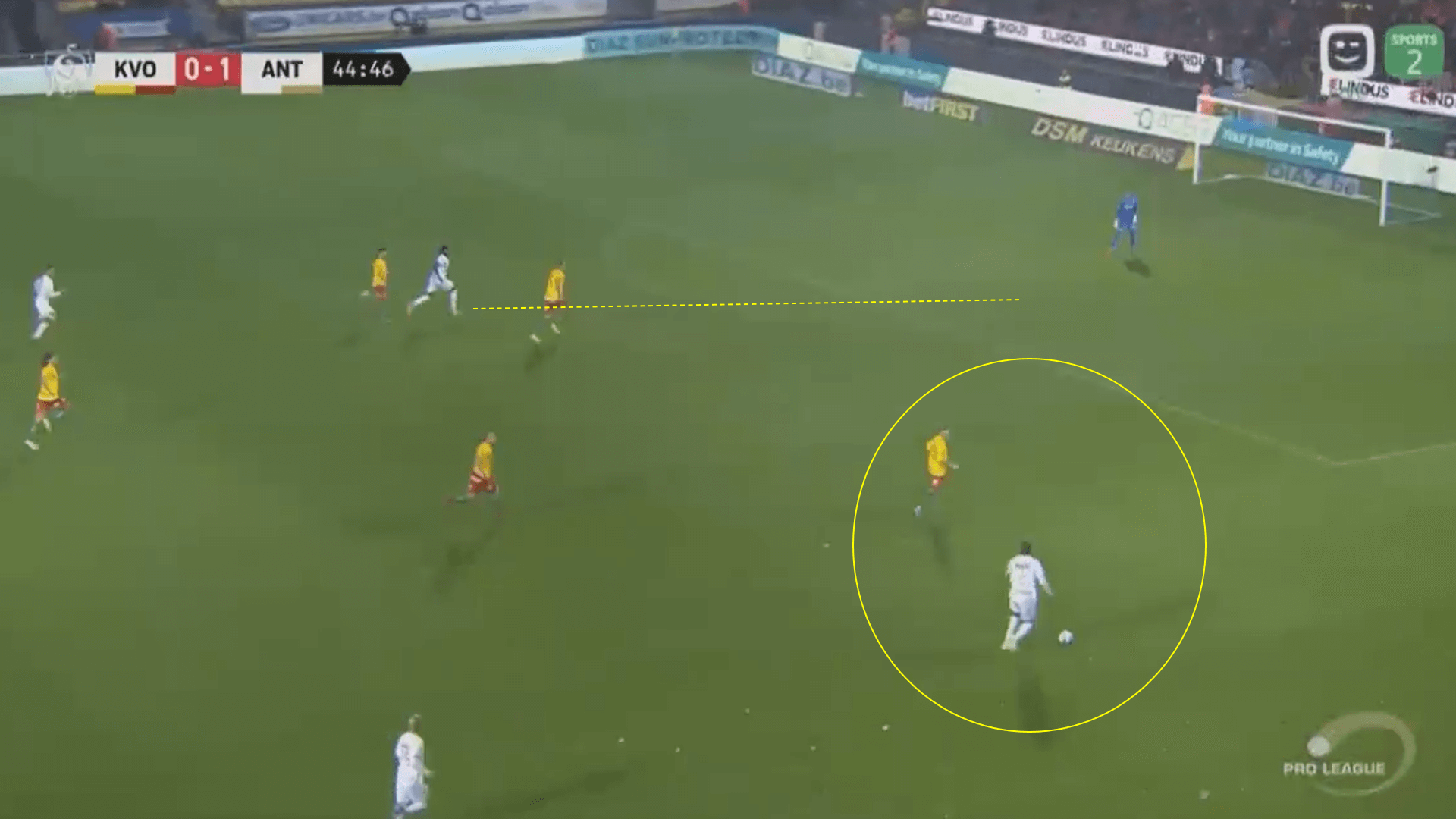 Unfortunately for Antwerp and Mbokani, Zé doesn’t appear to pick up this trigger. Despite having enough time to weigh up the cross, Zé appears to just put the ball in without noticing the run of the attacker. Even if Mbokani had made a different run, Zé’s overhit cross would have failed to find him. 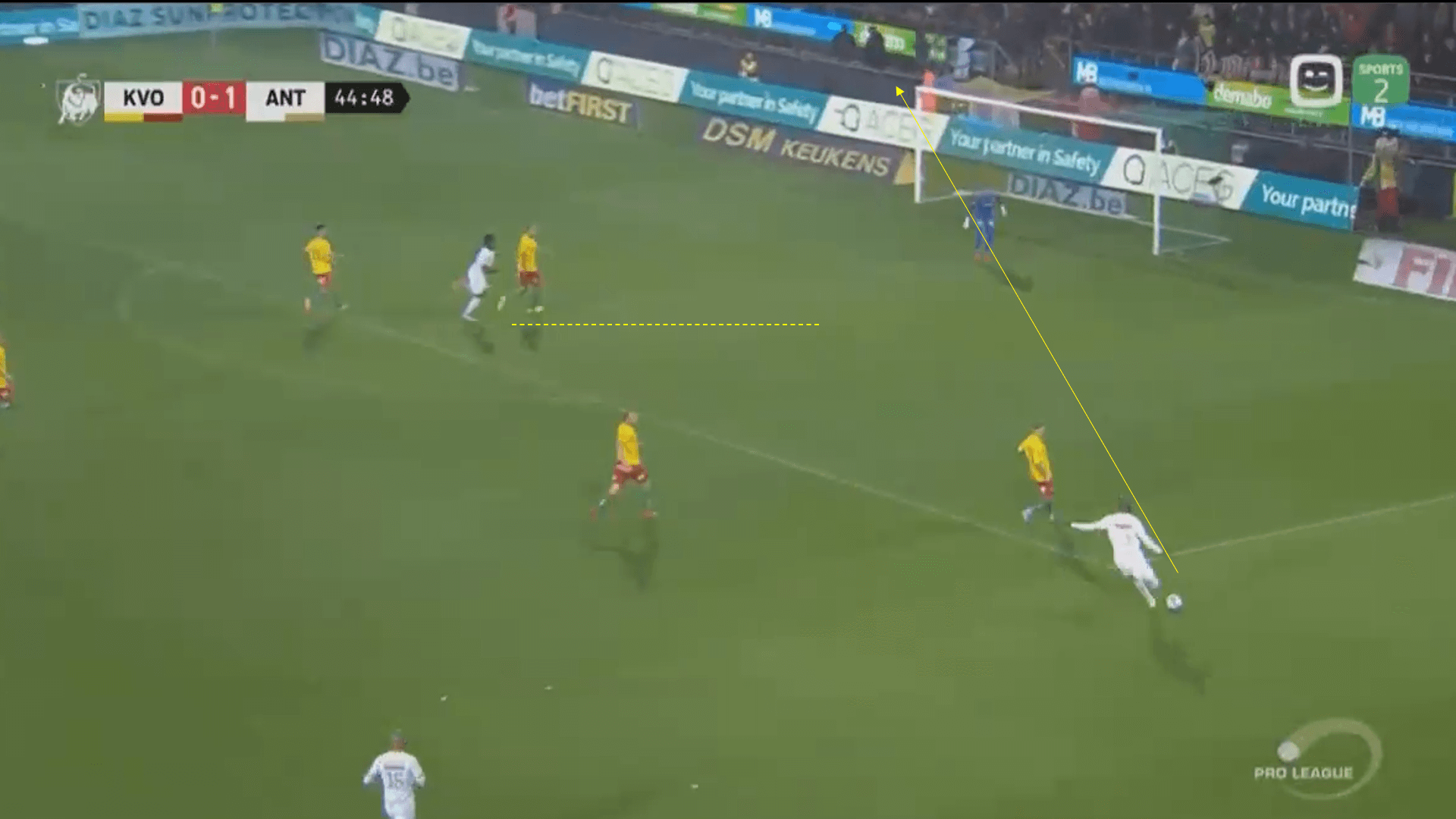 Again, another example below from the same game. This time Zé is in a similar position, with more options to pass to. However, with a striker like Mbokani in the box, the winger knows that he will be expecting a delivery. Similar to the above example, the striker is making a run across the defender. 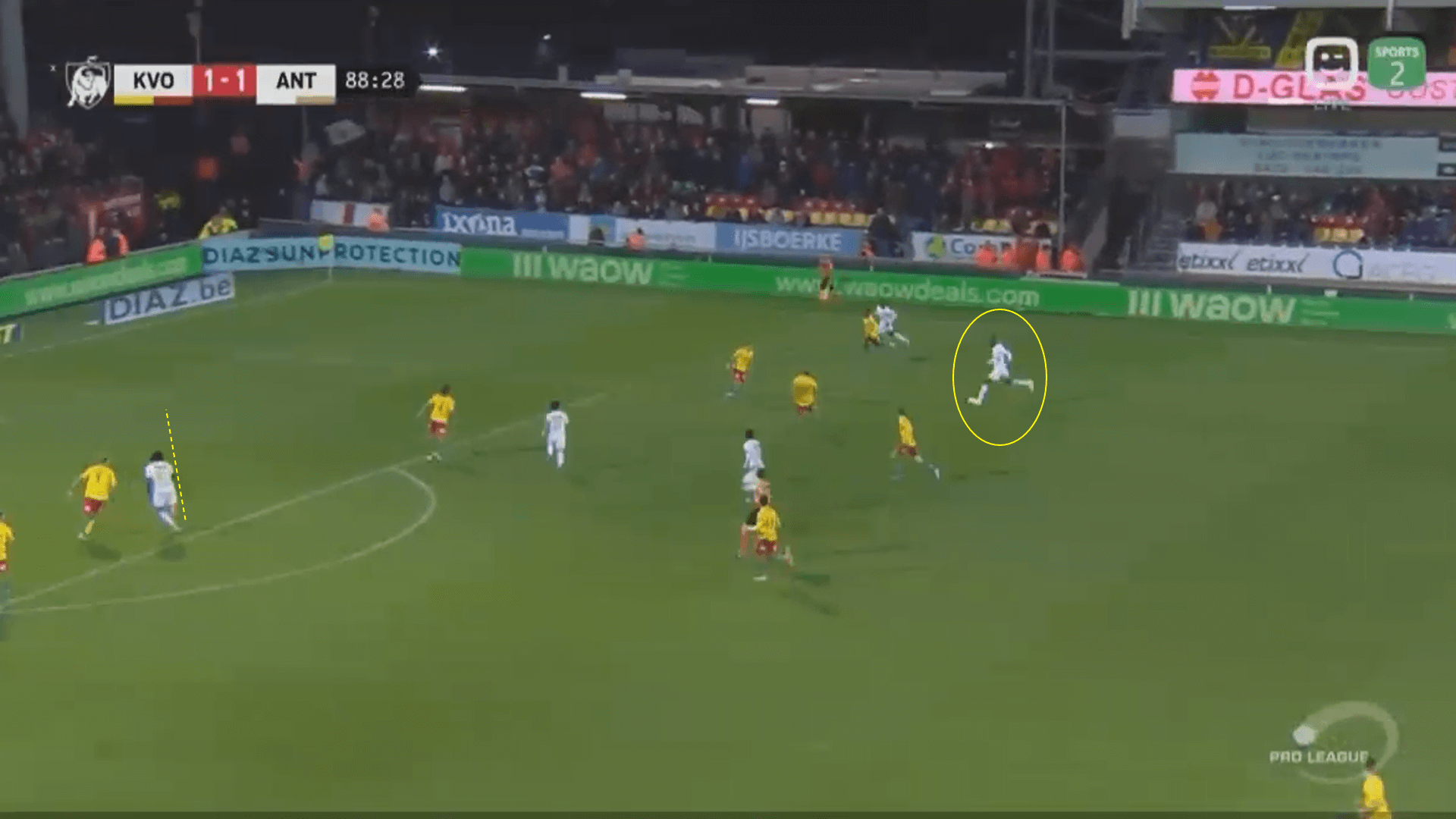 Unfortunately the cross is once again overhit and the ball is easily cleared. Perhaps the new coaches at Antwerp will look at this and encourage either a different run from Mbokani or for Zé to look for the run of the striker across the defender. This could help boost the success percentage of the crosses, and also help to increase the Cameroonian’s assist numbers. 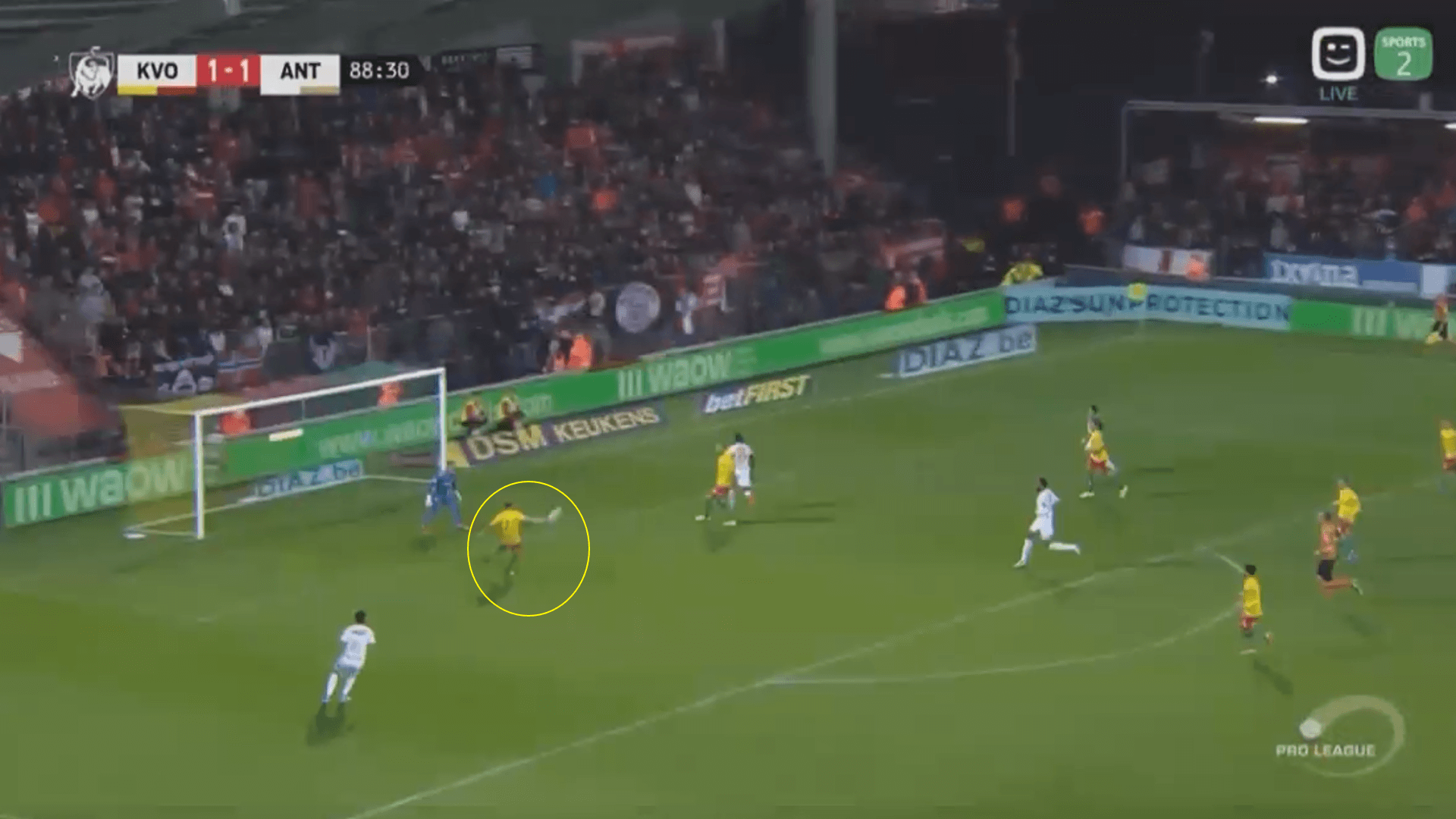 Crossing is an area Zé will no doubt be working on over the summer to help improve his game. It will be interesting to see if he has taken his game to another level and can increase his assists from his crosses.

Zé is still young, and will hopefully still improve, especially when it comes to crossing. If he can add assists alongside his goals next year, he will certainly be attracting interest from clubs outside of Belgium. It will be interesting to see if the new manager at Antwerp, Leko, will be able to get as much out of the winger as his predecessor was. Hopefully we see Zé take another leap forward into becoming one of the very best wingers in the Pro League.