This week of the Serie A fixture included a clash between AC Milan and Roma at the Giuseppe Meazza. Both teams were pursuing for a continental competition ticket for next season, hence, it was an important game. After a 90-minute intense battle, the home team won with Ante Rebić and Hakan Çalhanoğlu’s goals.

In this tactical analysis, we will reveal the tactics of Stefano Pioli and Paulo Fonseca. In fact, although Roma lost the game, they were not really that poor.

AC Milan started with a 4-2-3-1 formation, this was the exact same squad from the Leece victory. Franck Kessié and Ismaël Bennacer partnered at the centre of the midfield, Çalhanoğlu continued to play as the left-winger as Giacomo Bonaventura was the offensive midfielder.

Roma also played in a 4-2-3-1 formation, but there were quite a lot of changes from their last game. Only Antonio Mirante, Chris Smalling, Jordan Veretout, Henrikh Mkhitaryan and former Manchester City striker Edin Džeko started in the previous game.

Roma have set a very disciplined midblock to deny almost all positional plays from the opponent. We could interpret the shape as a 4-3-3 with the wingers were moving according to the positions of the ball. The unchanged components of both lines were the central players – Lorenzo Pellegrini often formed the first line with Džeko. The most important was to maintain a compact block at the centre, so, pressing the centre-backs were unnecessary.

As an example, the ball was on Roma’s right flank before the pass below, so Mkhitaryan went to the first line. When the ball was moved to the opposite flank, the Armenian player retreated deeper to maintain compactness in case Milan progressed to the central third.

The key of this midblock was to shut the central passing lanes and preventing Milan from finding the pivots. By inverting the wingers narrowly, the passing lane to the full-backs were opened and Roma enjoyed a numerical overload in this phase. Here, neither Kessié nor Bennacer was found so Simon Kjær played to the right-back. 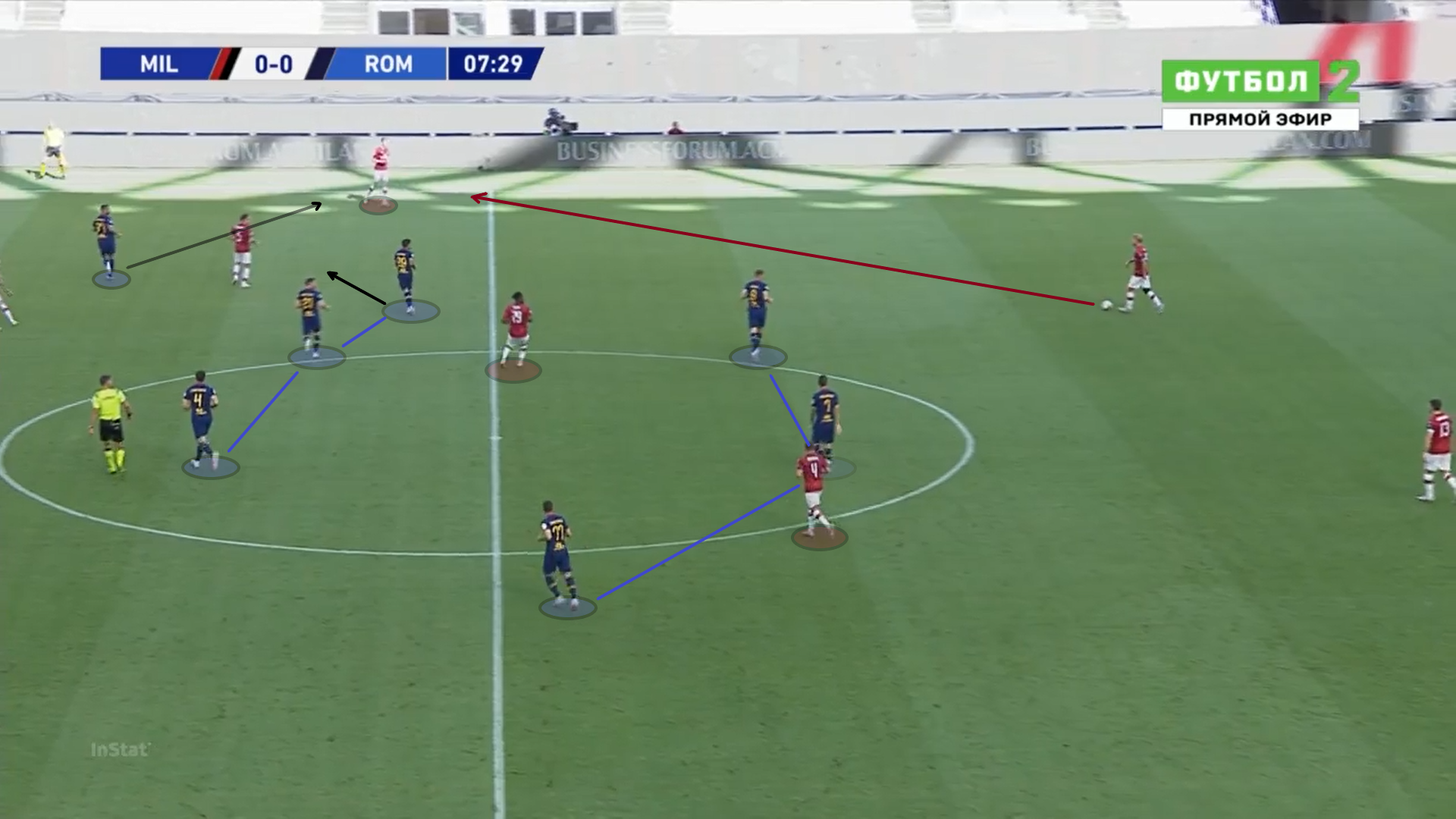 Consequently, the opponents often played long or finding the full-backs as they were the free players. However, Roma were well-prepared for this, by committing the full-backs to apply instant pressure to the wide receivers, hardly could Milan progressed as their inability to play in tight spaces.

The unsung heroes were players forming the second line in these cases. They were alerted to close the central passing lane towards the Milan inside players. In the above image, Justin Kluivert moved to Bonaventura simultaneously to Leonardo Spinazzola’s wide movements to access Andrea Conti.

In the below scenario, we show a more detailed example of how Roma defended at flanks. The well collaborated defensive actions of the second line player – Mkhitaryan and Davide Zappacosta were highlighted below.

Also, the ball side centre-backs should always provide the defensive cover for his full-back. Smalling was committed to this duty and cleared many passes behind the Zappacosta. 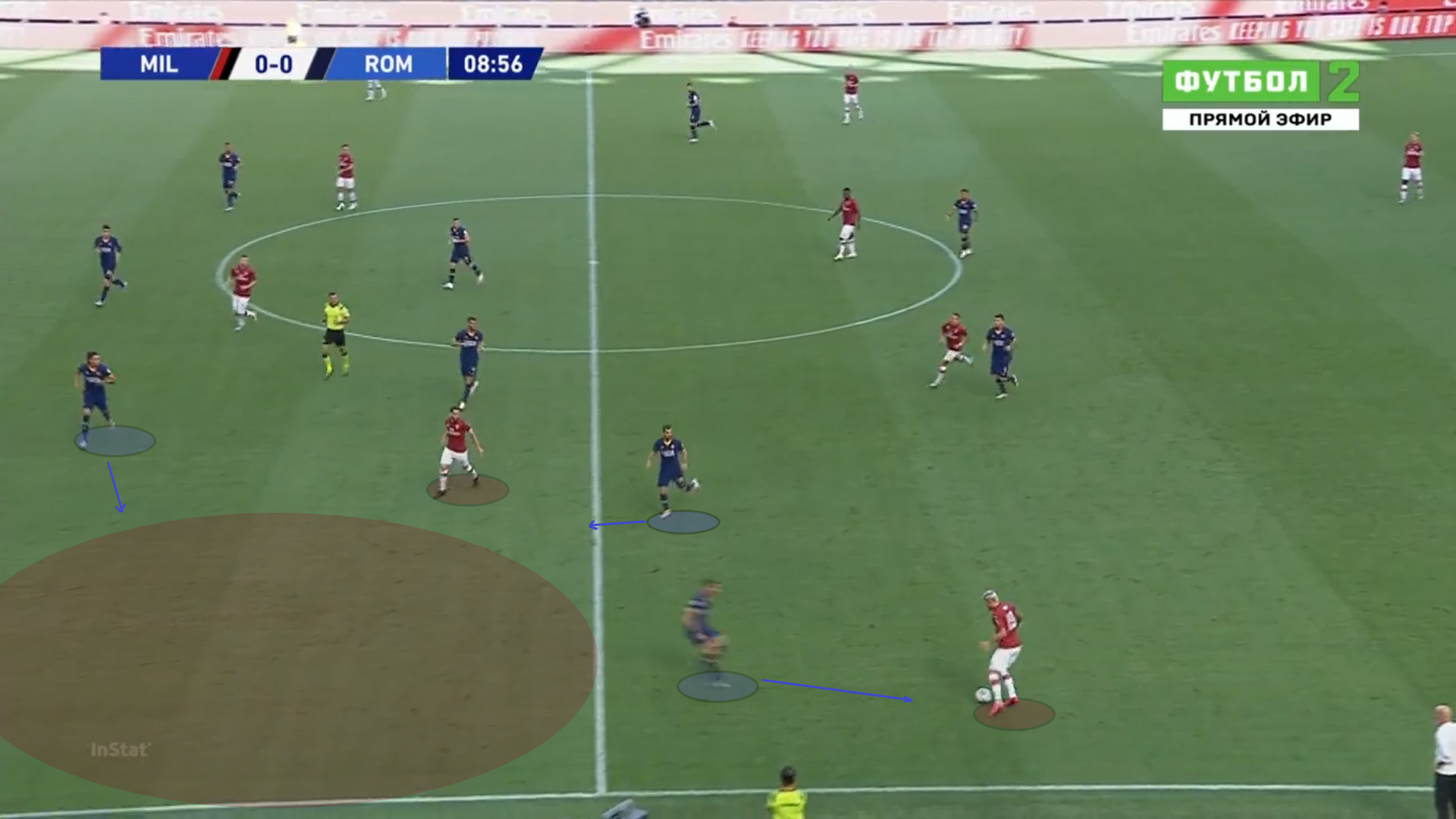 In other words, the potential pressing trap of Roma was set centrally, which were the midfield players. Since the block totally contained Kessié and Bennacer, if Milan were sloppy when passing and circulating by the pivots within the block, Roma could pressure the receiver from many angles and win the ball back.

As an example, Conti went for long to find Samu Castillejo, who was keen to run behind the defence. Spinazzola was strong in the duels involved in these situations, hardly could the Milan #7 control the ball comfortably because of these passes.

The pressing trap we mentioned was on Kessié here, if Conti passed to the Ivorian pivot, then, Roma could pressure him from three angles while keeping his partner marked. 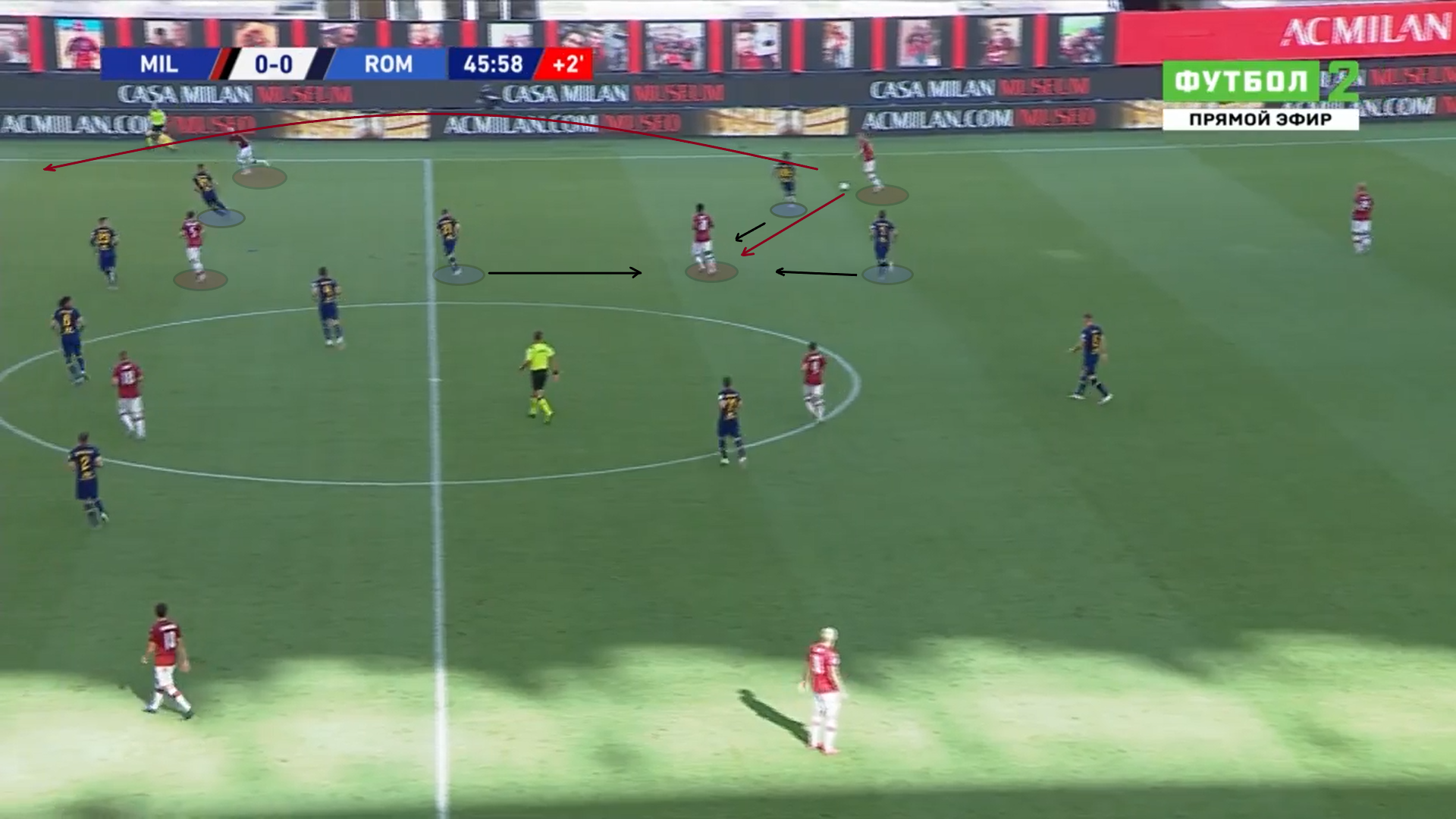 Milan had 533 passes in this game, they tried to initiate the attacks by some build-up plays in the first phase but always failed. Since Roma left the centre-backs free to play the out-balls, Kjær and Alessio Romagnoli were the main men to circulate the ball at the backline.

An issue hinted above was the involvements of Kessié and Bennacer, both stayed behind the Roma first line at the beginning. Without exchanges of positions and movements, Džeko and Pellegrini easily shadowed the Milan pivots. This always forced the centre-backs to play a long ball because of no ground progressions, just like Kjær here. 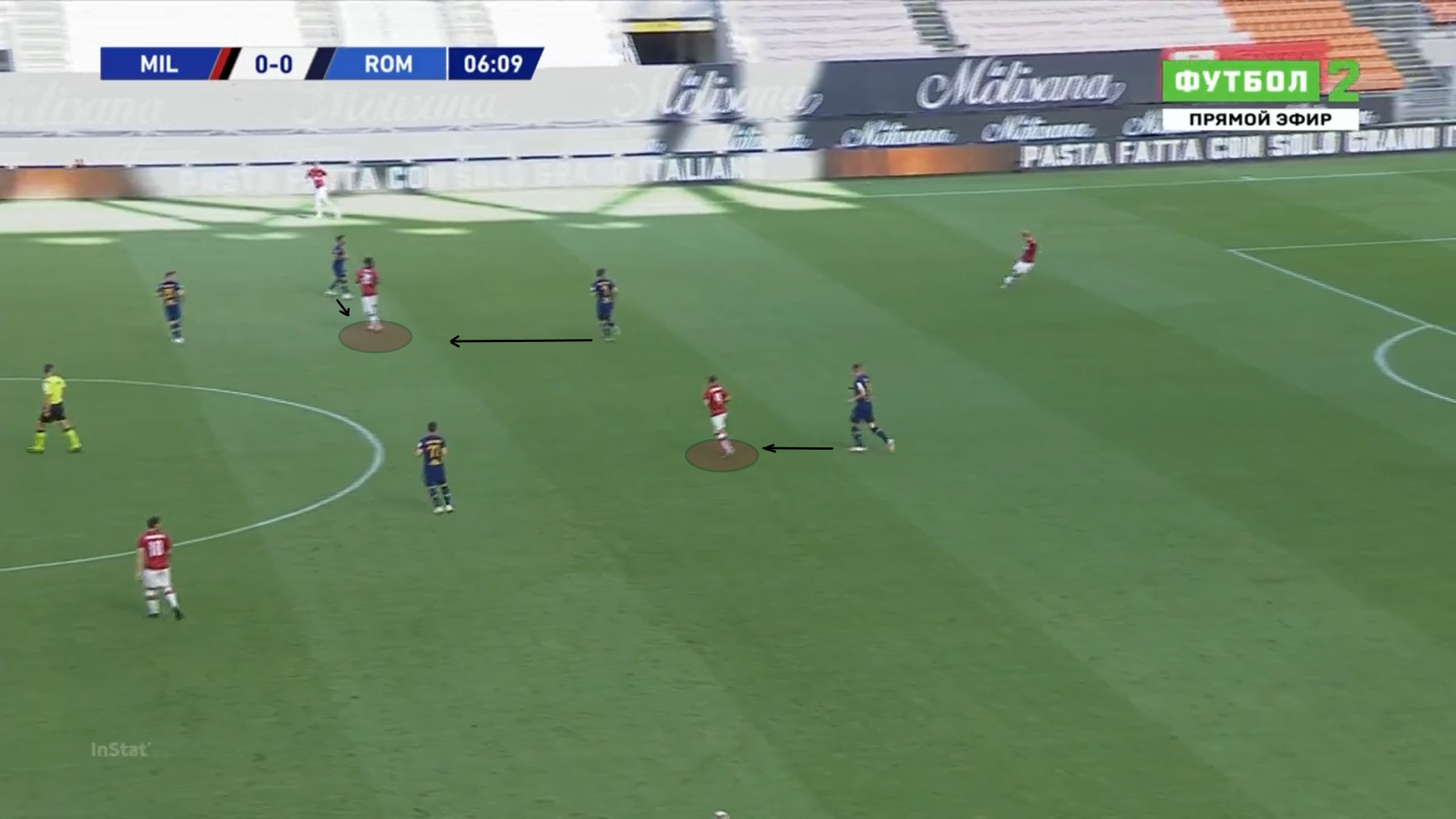 Afterwards, Bennacer dropped to the first line more often to free himself from the markings. His partner: Kessié remained static within the block. The Algerian midfielder either stayed between the centre-backs or at the half-spaces, serving as the connecting player to find the advanced full-backs.

Because of Bennacer’s deep positioning below, he only faced the pressure after receiving the pass. This created rooms to play a pass and reach Theo Hernández.

Since Bennacer was the player tended to appear out of the block, Milan was trying to progress play by the left-back more than the opposite flank. 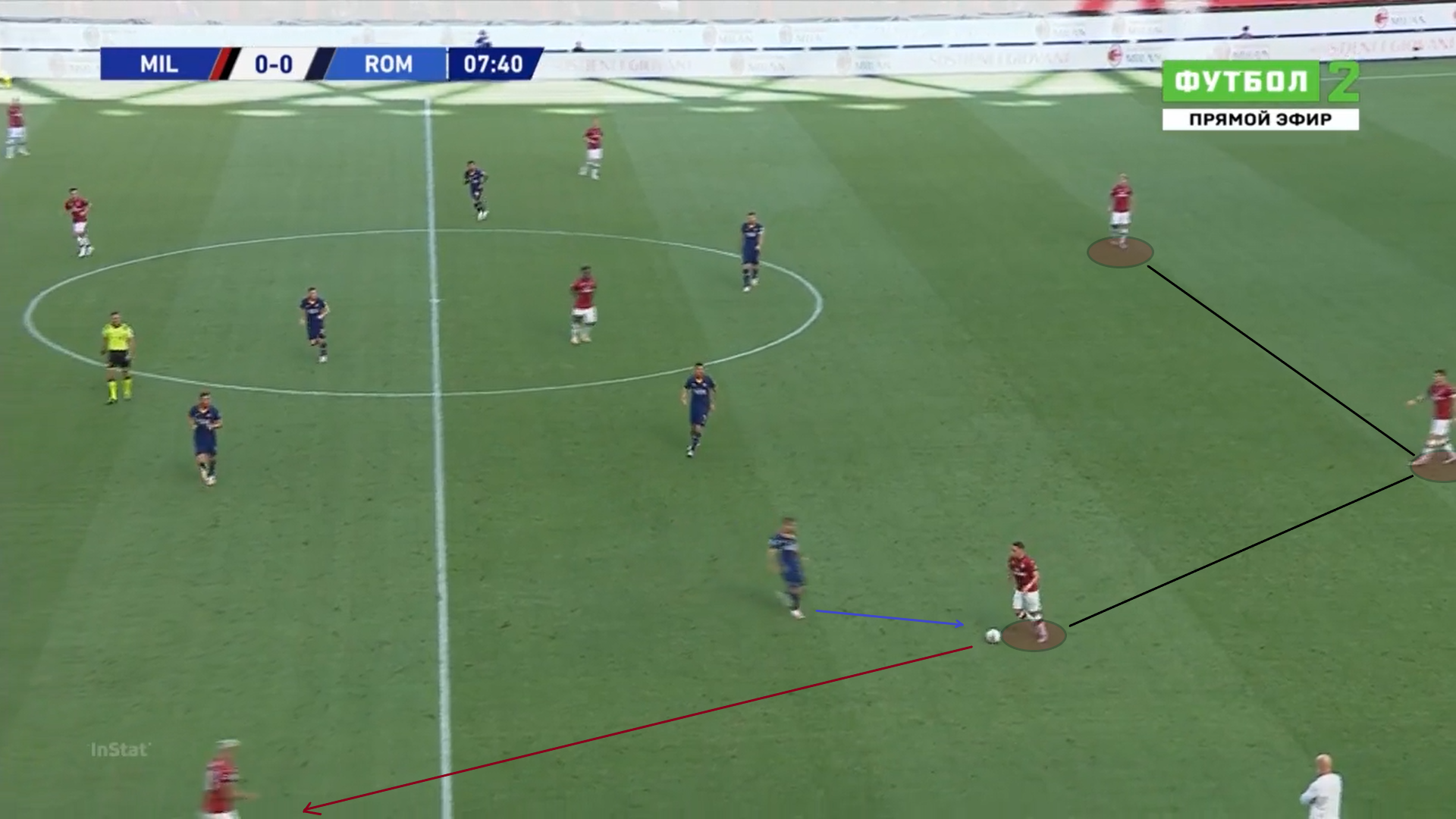 However, Milan also failed to progress through the wide players as we have explained how Roma operated the midblock. The second line and the centre-back did brilliantly provide the defensive covers and shut the passing lanes.

So, what would happen if Milan tried penetrating into the block? This was difficult as Kessié lacked the composure to create something when facing pressure. Meanwhile, Bennacer was out of the block often.

This image below was an example. Kessié quickly played to Hernández, but this instantly invited the pressure from four different angles. The Frenchman defender had to adopt the safest option – a return pass to reorganize an attack. 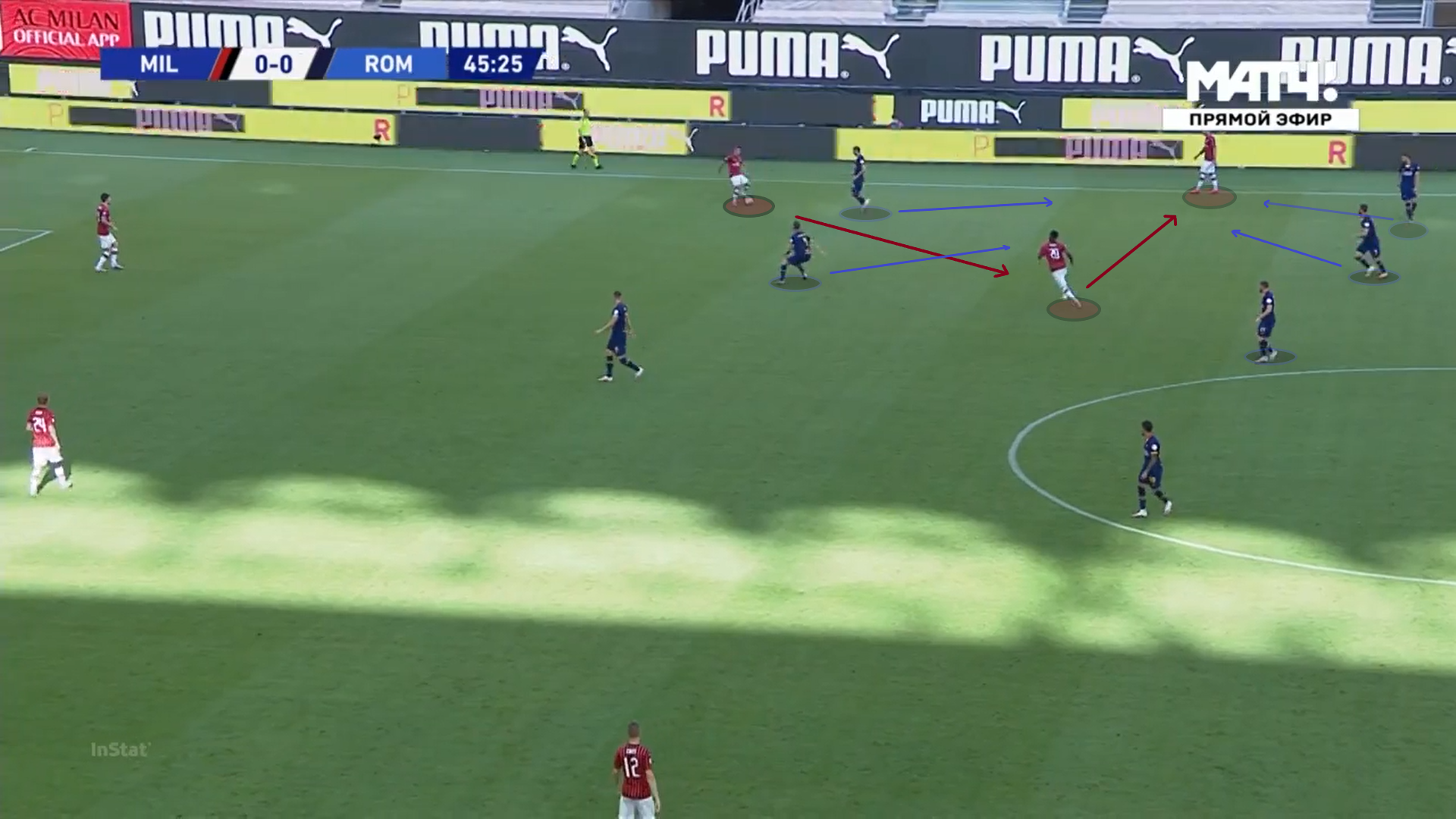 Milan also tried to give Roma a difficult first phase by applying the pressure. However, the defence was incomplete in the first half because of the awkward positionings by the midfield duo. The full-backs seldom pushed high and join the pressing, instead, they stayed deeper at the backline.

We interpret the defensive shape of Milan as an irregular 4-3-3 or a 4-4-2, which was inconsistent and lacked clear principles. Firstly, Rebić was often underloaded when pressing the centre-backs alone (2 v 1). As a supporting player, Bonaventura did not do enough to provide the defensive cover.

On most occasions, Milan wingers were focusing on players at the half-spaces, like Castillejo below. The dilemma was: if the midfield duo pushed high, Roma exploited spaces between the lines. On the contrary, the press was loose, and the opponent could easily find the wide players to progress plays.

Here, Kessié and Bennacer stayed deep. Because of Kluivert’s positional superiority, Milan had to let Spinazzola receive the ball. If Kessié left his position, passing lanes to the Dutchman winger was opened.

We also drew the horizontal distances of the pivots and the Milan first line, these were incredibly huge, and players were not covering each other during the press. 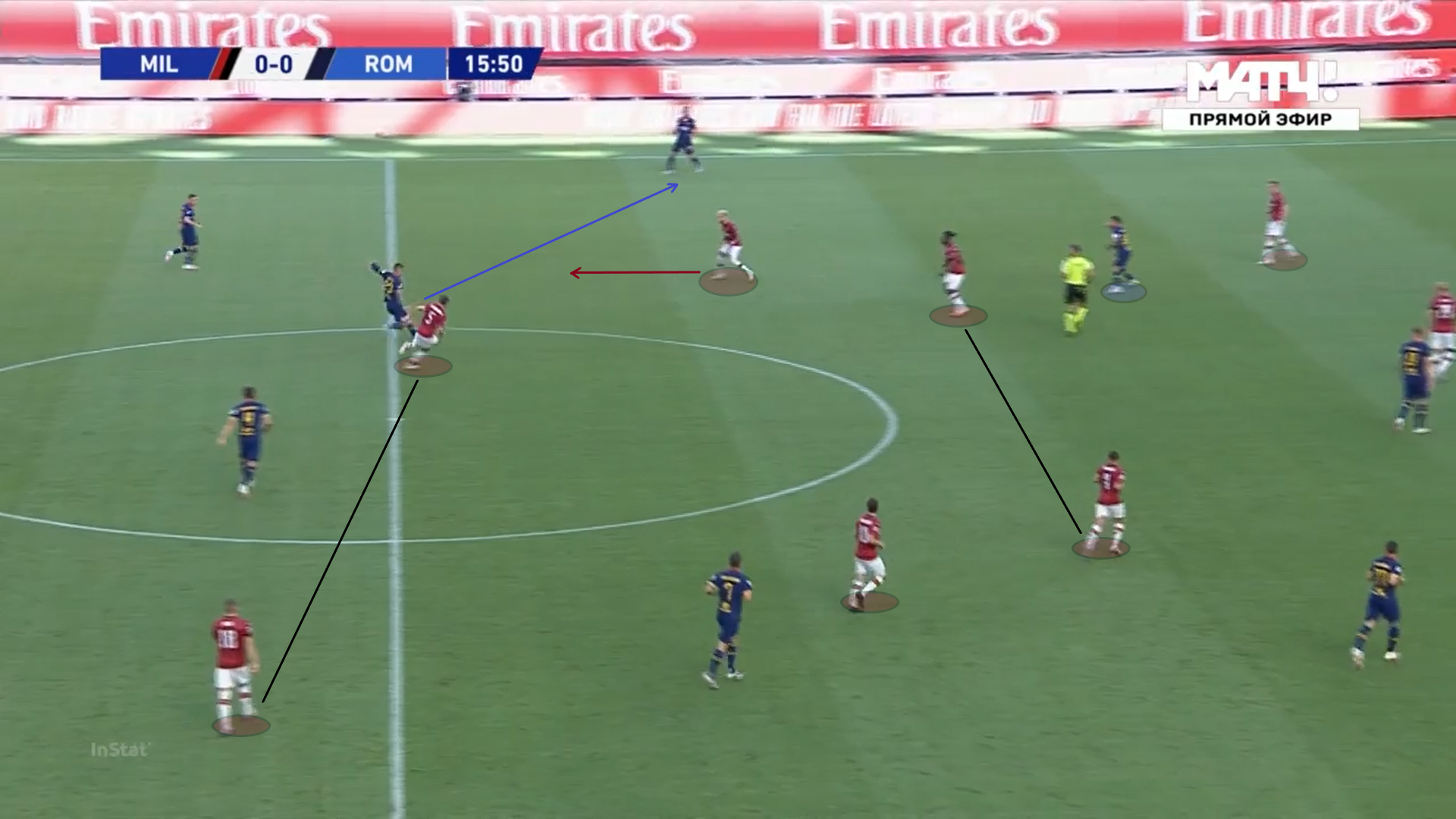 Since the defence was more like a zonal system instead of a man-marking scheme, Roma used complex positional interchanges to swap many players’ positions. Milan were easily underloaded as the players could merely react to the direction of the ball.

Here, Roma dropped Pellegrini in the first phase, moved Veretout to the half-spaces and positioned Cristante centrally. This invited the players forming a 3 v  2 centrally but playing into this region was not the intention of the opposition.

Instead, Smalling always tried to find the wide option, and Roma’s bag had many tools to unmask the passing lanes. Here, the drop of Cristante opened the passing lane to Zappacosta. Because Bennacer was attracted to the midfield, Milan took more time to reach the wide targets when the block. was bypassed. 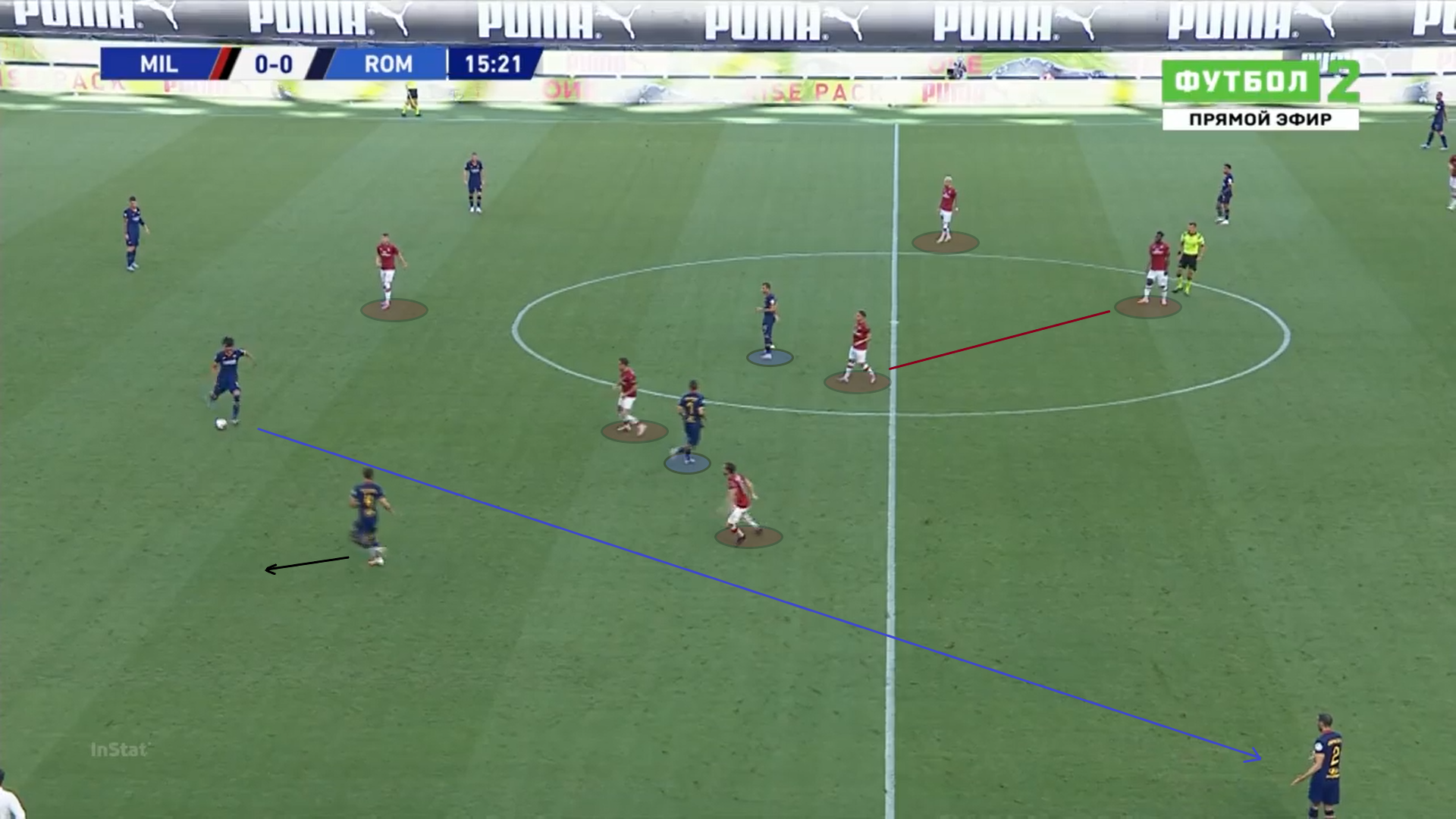 The last section of this analysis is explaining how Roma bypassed the Milan press by dropping the additional players in the first phase. The positionings of Fonseca’s men were flexible, the full-backs were pushing high and wide, the pivots operated fluidly at the half-spaces or at the centre. This often opened the passing lanes to a dropping player as Milan were not sure about who to defend.

Here, Mkhitaryan was found by Smalling’s pass, who was unmarked because of dropping from the advance area. This was because of Džeko’s behaviours to manipulate the backline high up on the pitch, which preventing the centre-backs from stepping out. 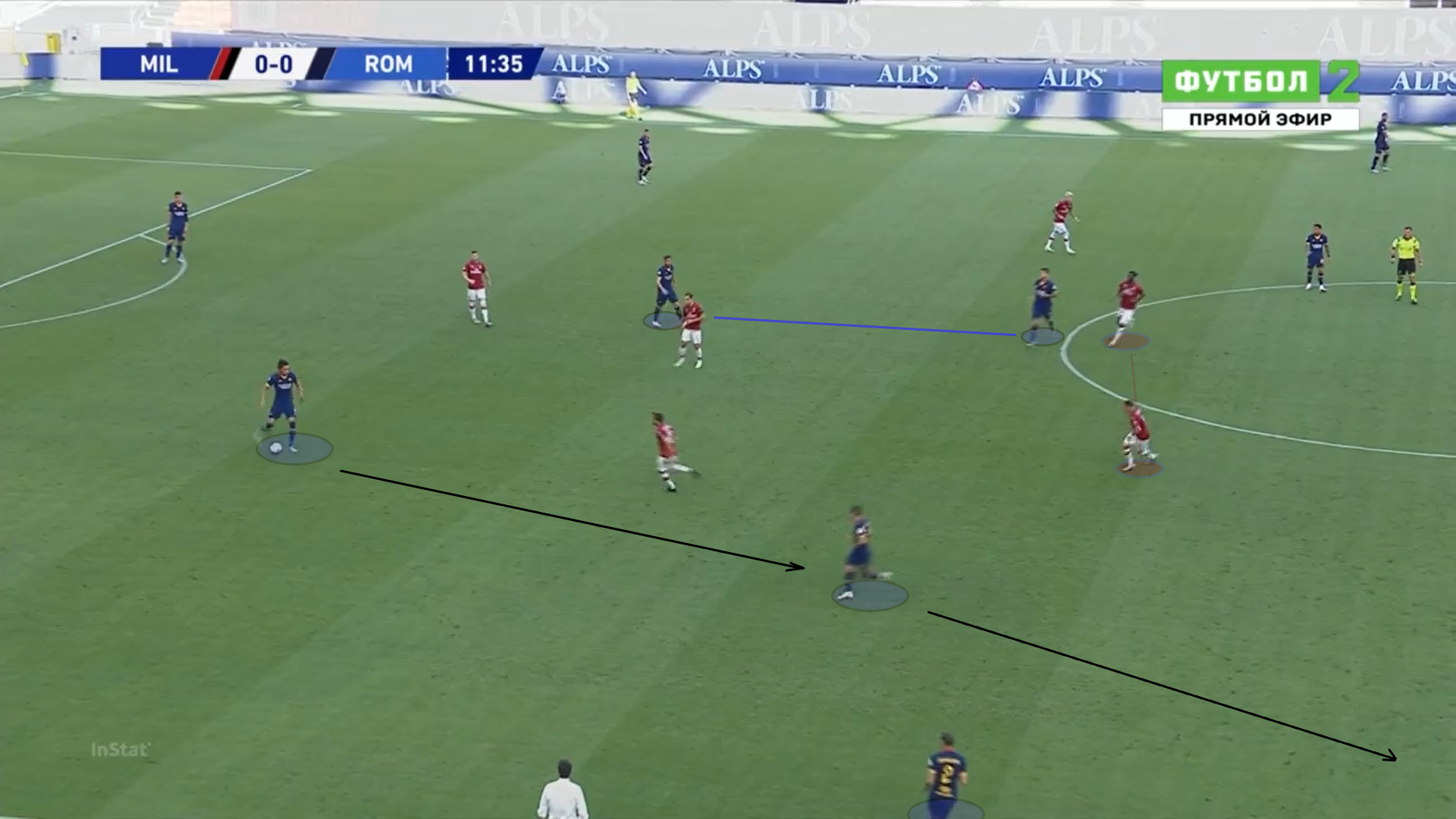 Here, a more detailed example was shown. Because of the positional interchanges, Milan midfield duo sometimes messed up their positionings when in the press. Kluivert was doing well to utilize his positional superiority by staying between players in the offensive phase.

Here, Pellegrini (AM) took Kessié and Kluivert (LW) took Bennacer, leaving Mkhitaryan on the Algerian midfielder’s blindside. Not sure what Bonaventura, Castillejo and Rebić were doing here, as their distances would never provide each other with the defensive covers, especially Milan were not dominating in the 1 v 1 ground duels.

Another player confused by Fonseca’s brilliant tactic was Çalhanoğlu. Since Zappacosta moved into an advanced position, the Turkish midfielder did not know who to mark and what to do below. 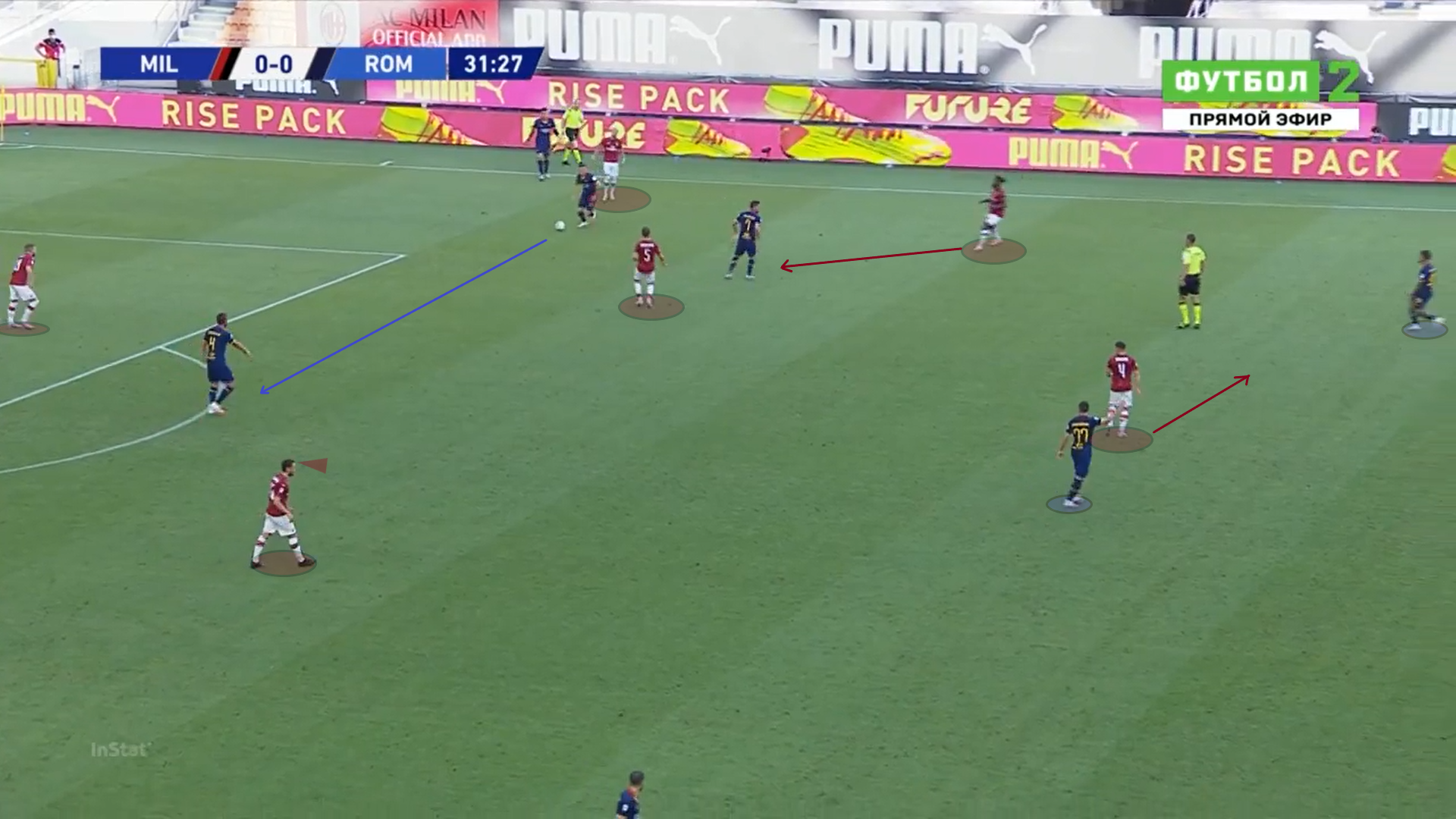 The light pressure allowed the central pass happened, and because of the positional interchanges as explained, Mkhitaryan was left as the free man. He was free to receive the pass from Cristante and progress the ball further, Rebić was far from accessing him. 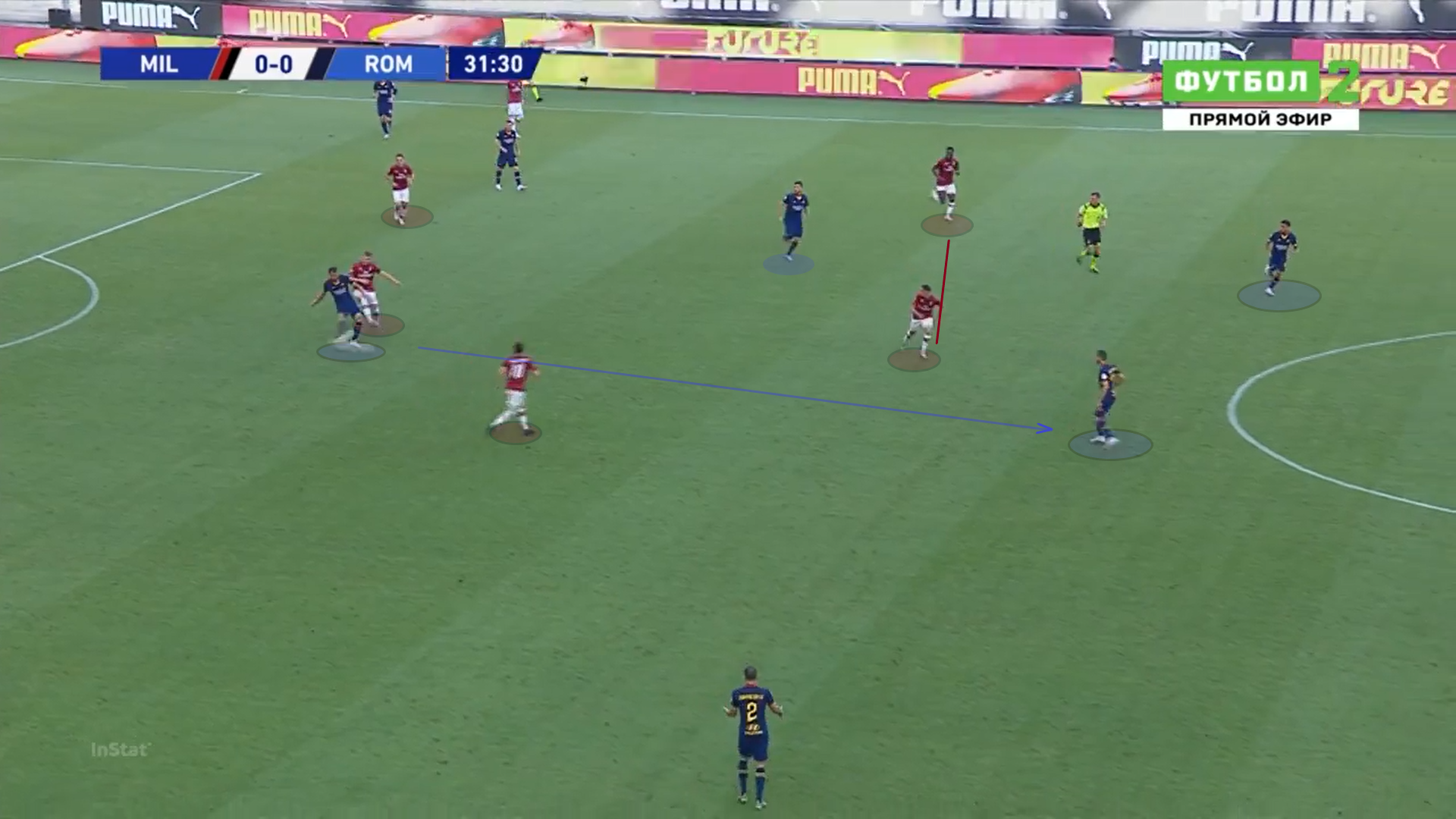 However, the setups were suboptimal in the offensive third. If the full-backs were released as the main man in the wide corridors, they were the key to create the dynamics. Neither Spinazzola nor Zappacosta looked dangerous at flanks.

In the first half, the best moves at flank were the example here, as Kluivert moved wide and created a temporary 2 v 1 overload with the supporting Spinazzola. The left-back was used as a decoy, disguised Conti and helped the Dutchman winger to whip in a dangerous cross.

Giving the ball to the full-backs in this area was suboptimal as they do not have the qualitative superiority in the 1 v 1 situations. Isolating Zappacosta and Spinazzola did not help Roma generating lethal opportunities, several crosses from the left-back were not deep enough to reach the targets.

When Diego Perotti and Carlos Pérez were introduced, they were instructed to make some supporting movements or diagonal movements to help Spinazzola more. This was a fine move as the deep runs worked when Spinazzola was drawing attention at the wide zone.

Here, Pérez made the run that making himself available as an option of a through pass, resulted in a cross but the delivery was not there. 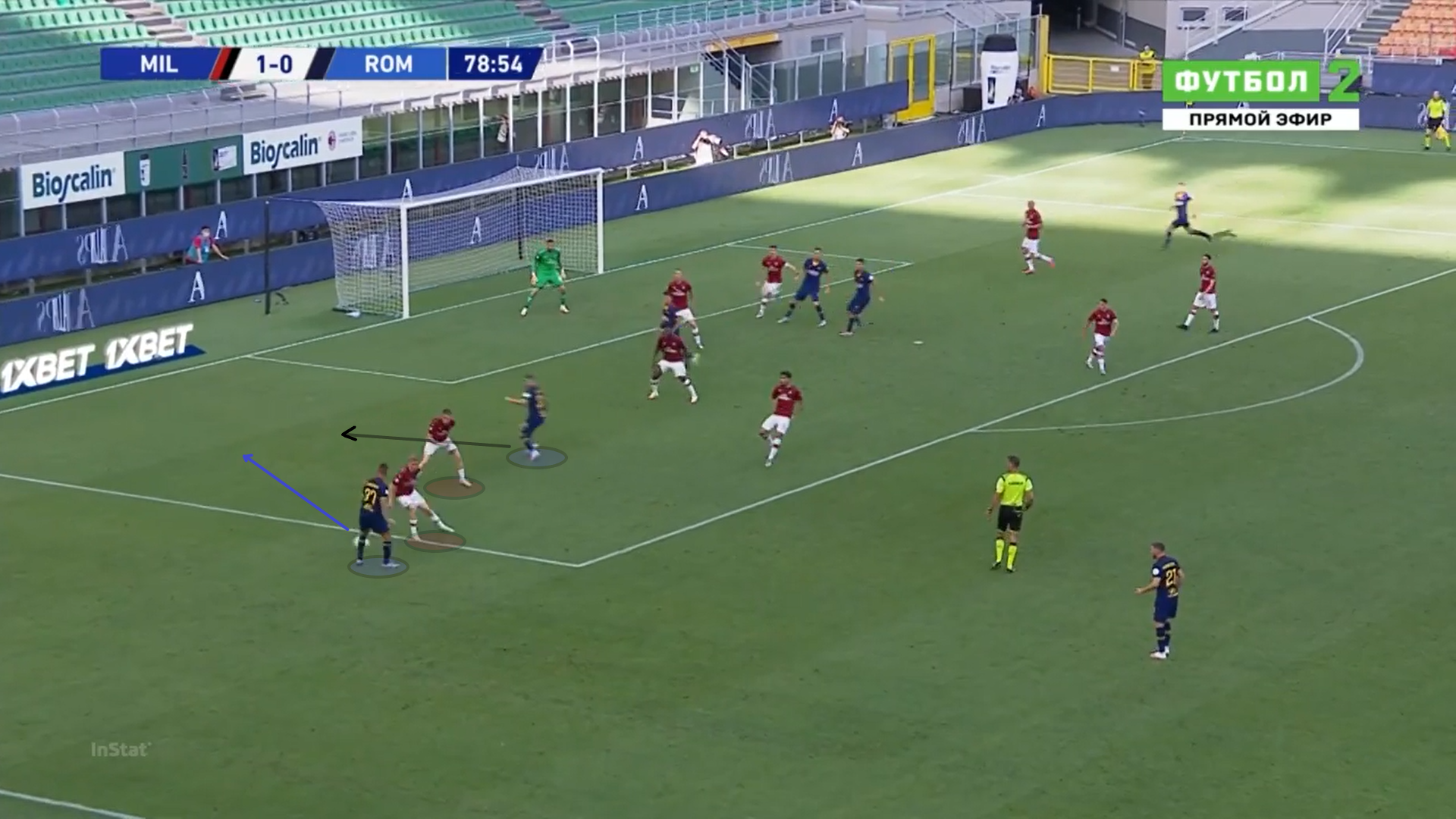 Throughout the game, Milan did not really break the Roma midblock by the positional plays. The build-up plays of Milan were far from satisfaction, some passes were played without a clear purpose and this was not harming the opponents.

It must be a disappointing result for Fonseca’s men as they might get more in another day. The positional interchanges they used were sensational, and the disciplined midblock was also uneasy to beat. They really should improve their productivity and decisions in the offensive third to grab the opportunities in the future and make the efforts count. Roma has a lot of crosses: 22 and more than Milan’s nine, but the quality was not enough, especially the full-backs completed none of their eight crosses.