Paulo Fonseca’s reign at Roma has got off to a promising start, particularly when looking at the style of play he has implemented at the Olimpico. One thing that has stood out so far is his innovative build-up patterns and the flexibility with which Roma move between structures depending on the players available to the coach. The purpose of this tactical analysis scout report is to look at the tactics of Fonseca when Roma are in possession of the ball and, particularly, Fonseca’s build-up patterns.

In Serie A this season, Paulo Fonseca’s Roma always play out of a standard 4-2-3-1 structure. Defensively, the shape often becomes a 4-4-1-1 or a 4-4-2. In attack, the shape is very flexible and can often be transformed into something akin to a 3-2-4-1 or a 2-4-3-1 with the full-backs providing width. Below, I will look at a few of these variations.

One of the most interesting aspects of Fonseca’s setup when looking to progress the ball has been the use of different setups in the first phase of ball progression. For instance, Roma have been seen building up with both two and three players in the first line. In recent weeks, Roma have largely used the mechanism highlighted in the image below. That one means Amadou Diawara drops in between the two centre-backs, who split wider, and therefore creates a situational back-three when building from the back. 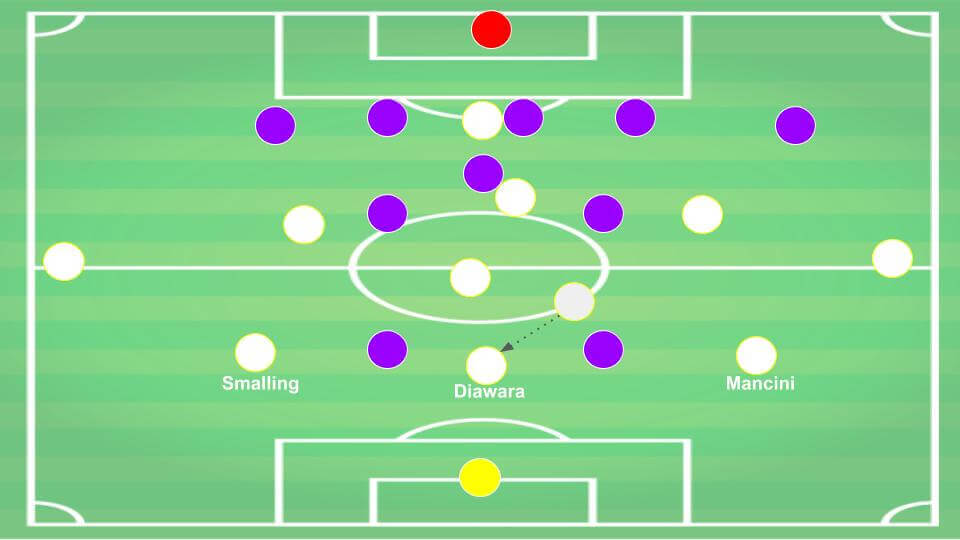 On other occasions, Fonseca has opted to use his full-backs in contrasting manners. The image below, from the away game at Bologna, sees the right-back Alessandro Florenzi stay narrow to form a back-three, while the left-back Aleksandar Kolarov (black) moves high on the left flank. These movements are balanced by the left winger Henrikh Mkhitaryan moving inside while right winger Justin Kluivert stays wide on the right. The image below also highlights one of the preferred attacking shapes Fonseca implemented in the first few months of the season, a 3-2-4-1 with excellent spacing in the central areas at different angles and horizontal lines. 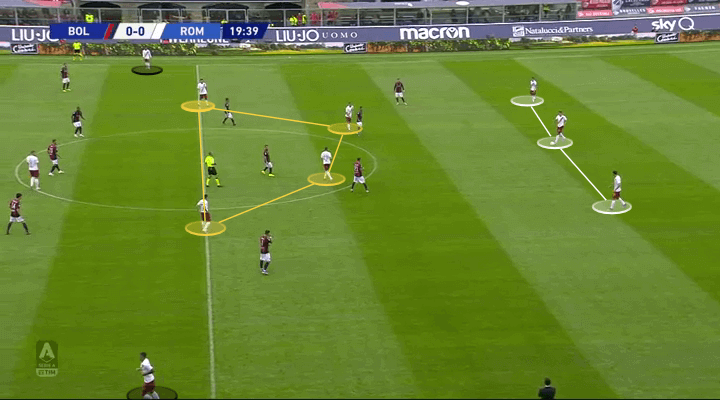 Away at Inter, Fonseca used Nicolò Zaniolo as the striker which saw Roma line up in an attacking shape that flooded the central areas with players to help progress the ball. Diawara (yellow) would drop deepest while both wingers moved inside with both full-backs instead pushing on out wide. 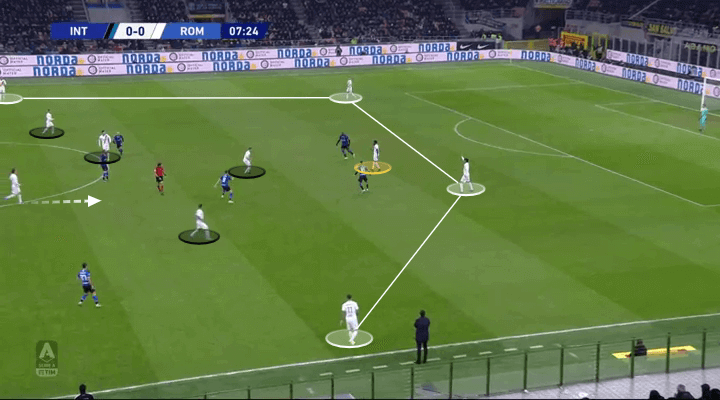 This created an attacking shape that saw Roma build with only two central players in the first line, the two centre-backs, while having SIX central passing options positioned in between the lines of Inter’s defensive shape. 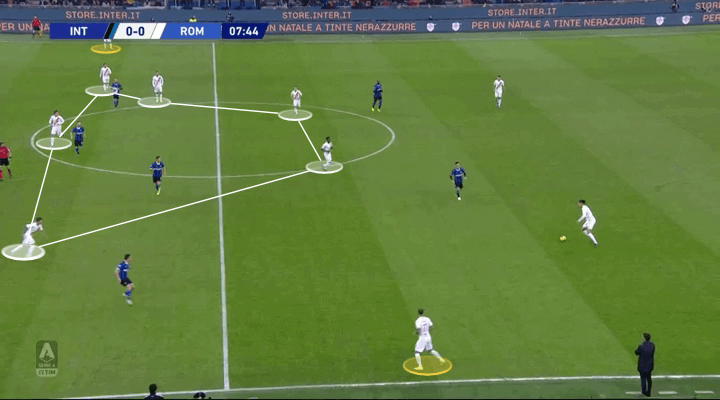 The flexibility of his setup has seen Roma improve their ball progression since the start of the season and, likely, they will become an even tougher team to press in the coming months as they will be able to seamlessly move between different attacking systems.

One thing that Fonseca has taken with him from his dynamic Shakhtar Donetsk team is the use of very narrow wingers. As mentioned above, he has toyed with structures that have seen one of the wingers stay wide, but in recent months we have seen more of what we expected in regards to the positions his wingers pick up. As the image below shows, the two wingers, especially when Zaniolo and Diego Perotti have been used, move into either half-space while the full-backs attack the wide areas. These movements mean that Roma have three progressive pass options in front of the double pivot in midfield, providing the team with good chances to progress the ball and dominate the ball in central areas. 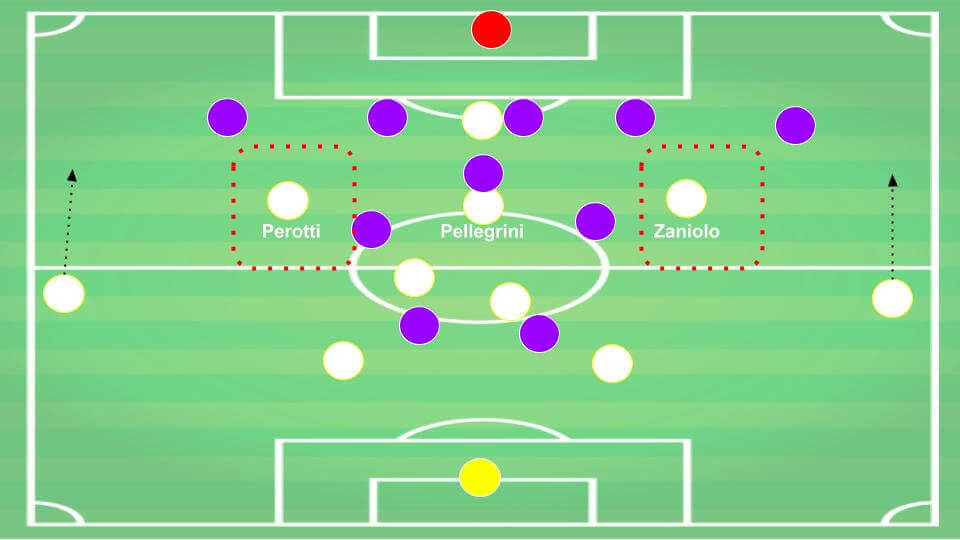 In the image below we see this at work as the left winger Perotti moves the ball across to the right winger Mkhitaryan who has plenty of space in the right-sided half-space while the right-back provides width. 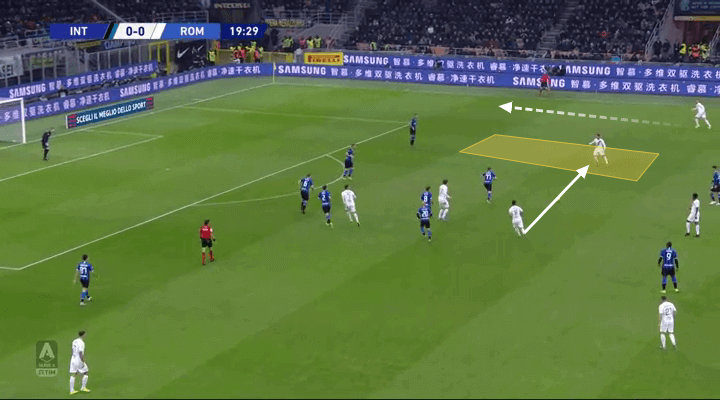 Half-space occupation has been important when Roma have attacked with a 3-2-4-1 too. Then, the number 10 Lorenzo Pellegrini has often been positioned in that zone and the deeper Roma players are always looking to progress the ball into him when in that zone. We can see one such example in the image below. 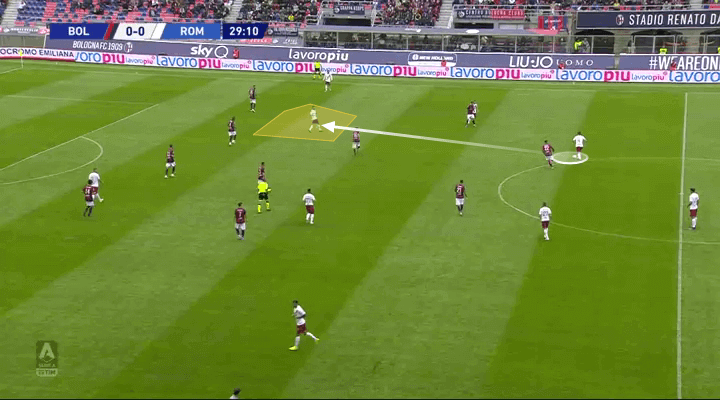 As such, half-space occupation, whether by his wingers or his number 10, is crucial to Fonseca’s attacking structures as he looks to progress the ball quickly from back to front.

As seen above, Fonseca wants at least two players to occupy the half-spaces while also having someone ready to attack the wide areas. To create dangerous situations, his Roma side use diagonal passing as a method to create overloads in wide areas. The image below highlights the pattern. On this occasion, the defensive midfielder Diawara finds Perotti in the left-sided half-space with a diagonal pass. The left-back Kolarov is already on his way and provides a wide threat as Roma look to draw out defenders towards the ball to attack spaces centrally or out wide. 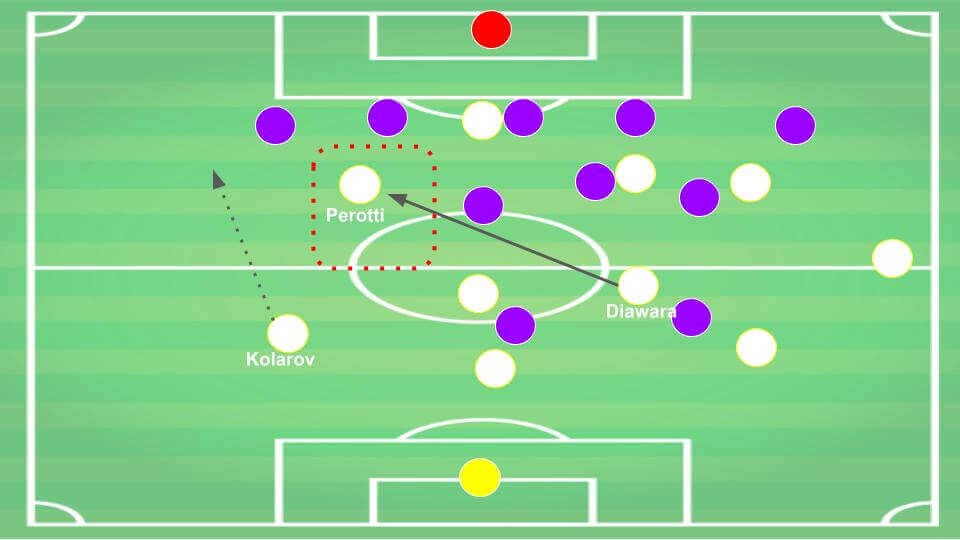 In the image below, we can see another example of Roma’s diagonal passing. On this occasion, the midfielder Jordan Veretout plays a raking pass into the feet of Pellegrini, who has positioned himself between the lines of Bologna’s defence and midfield inside the right-sided half-space. 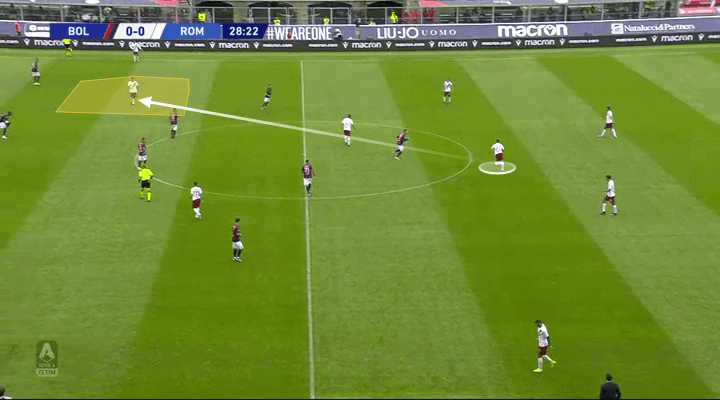 From their central positions, Roma’s wingers/attacking midfielders regularly threaten with deep runs into the spaces between the opponent’s full-back and centre-back. We can see this pattern below. As the ball travels to the left-back Kolarov (white) positioned on the touchline, Bologna’s right-back is drawn out to press. This opens the channel between full-back and centre-back that Pellegrini (yellow) is quick to identify. The Italian duly makes a run into that space and Kolarov plays him in. 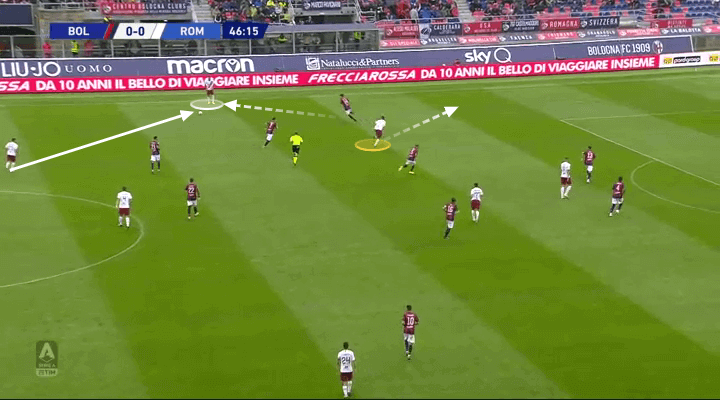 A similar situation can be seen below. The ball has been switched out wide to Kolarov (white) and the right-back has been drawn out. On this occasion, Mkhitaryan makes a run into that huge channel of space between full-back and centre-back. This pattern is a constant theme of Roma’s build-up play as a way to create dangerous situations from which their attackers can cause the opposition problems. 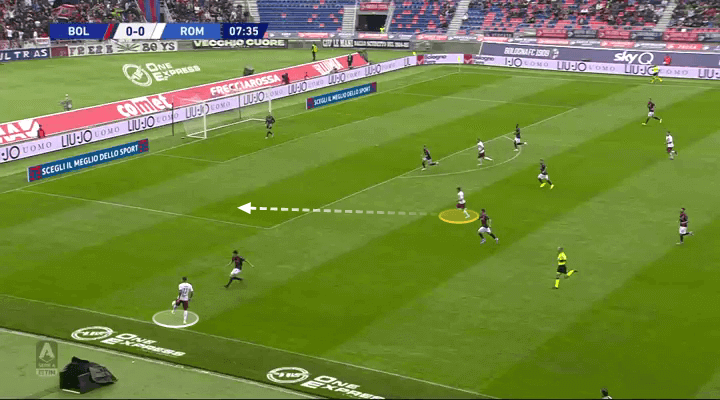 As this analysis has shown, Roma are a very interesting team to watch under the Portuguese coach. As his reign goes on, we will probably continue to see Roma’s build-up play improve. It will be interesting to see if he can continue to improve the team’s ability in possession because, on the evidence to date, they could be very, very good with more time.