Inter and Roma came into this game in very good form but it was Roma who impressed the most in one of the toughest away games in Serie A. The visitors dominated the first half but then Inter managed to claw back the initiative in the second. This tactical analysis will look at the attacking tactics of both sides as well as Roma’s defensive setup. 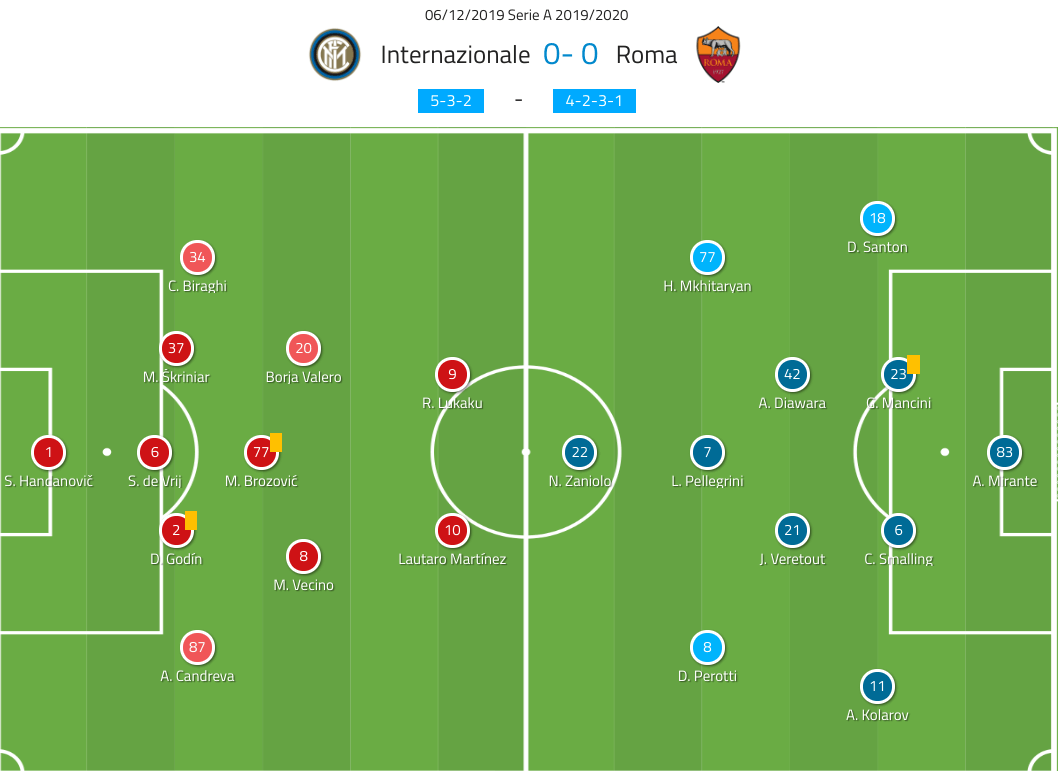 There were no real big surprises in Inter’s team given the absences of Roberto Gagliardini and Nicolò Barella so Borja Valero joined Marcelo Brozović and Matías Vecino in midfield. Otherwise, Antonio Conte continued with his 3-5-2 and picked an expected team with Cristiano Biraghi preferred to Kwadwo Asamoah at left wing-back.

Roma, on the other hand, surprised some people as Paulo Fonseca chose Nicolò Zaniolo to play up top on his own. This decision was made after Edin Džeko was doubtful with illness, but the Bosnian at least made it onto the bench. Zaniolo was preferred to Nikola Kalinić and his inclusion gave Roma an interesting dimension. Other than that, Roma’s team was expected with the wonderful Lorenzo Pellegrini captaining the side in Alessandro Florenzi’s absence.

Roma set up in a 4-2-3-1 but their movements in possession created a very different shape. The two full-backs, initially Davide Santon and Aleksandar Kolarov, provided width while the two wingers, Henrikh Mkhitaryan and Diego Perotti moved inside to play in more narrow positions. Additionally, Zaniolo would repeatedly drop out of Inter’s defensive line to become an option between the lines. We can see this very narrow setup in the image below where Amadou Diawara (yellow) has dropped out to receive the ball while the remaining midfielders and Zaniolo look for space in central areas. 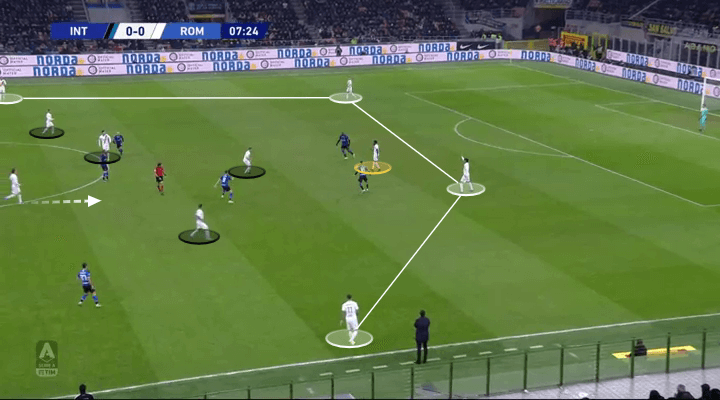 The image below highlights another example of Zaniolo dropping into midfield to receive the ball. These movements from the young Italian allowed Roma to overload the central areas to dominate possession. However, it also meant they rarely had anyone attacking the space behind Inter’s defensive line, which made them look comfortable but not always threatening. Again we can see how Perotti (white) has moved inside while Kolarov (black) awaits the chance to bomb on down the wing. 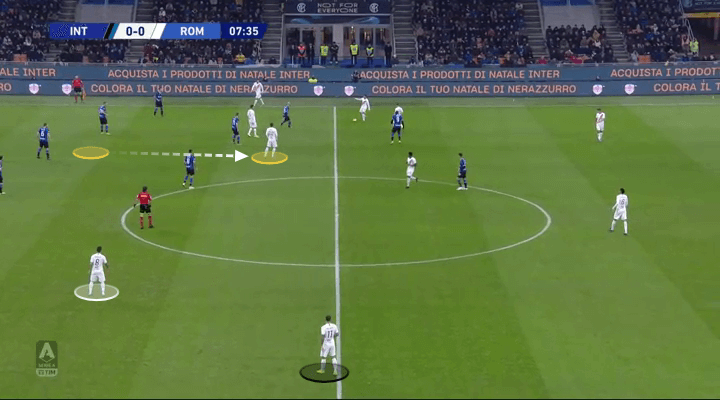 Fonseca’s side is always quite narrow and we can see it again in the image below. Chris Smalling is carrying the ball forwards and he immediately has the option of finding Perotti in a central position. The two central midfielders, the three attacking midfielders, and Zaniolo are well-connected, which they were throughout the match, and this allowed Roma to circulate the ball well in central areas while constantly switching sides to make Inter move their shape from side to side. 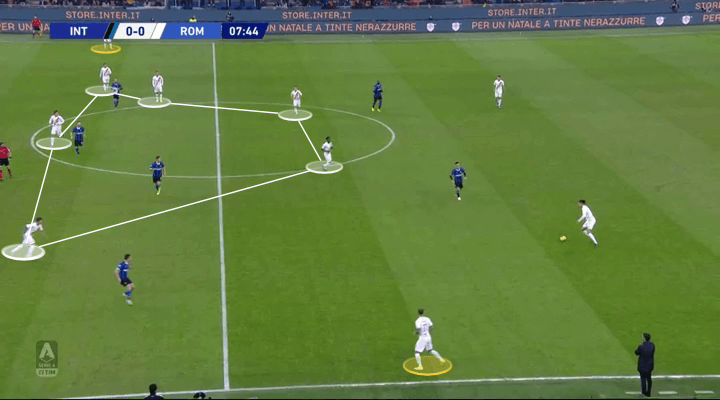 Below is another example of Roma’s build-up structure with Zaniolo having dropped deep and the wingers (yellow) narrow. 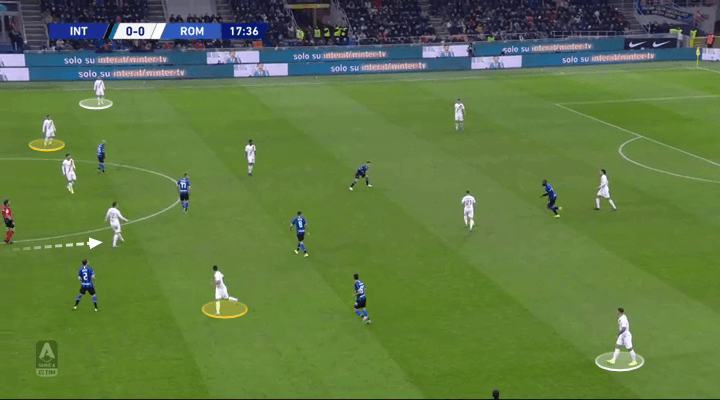 By having the wingers so narrow, Fonseca creates the opportunity for his players to connect and combine in central areas with quick passing combinations while retaining the wide threat due to the attacking full-backs. We see one such example in the image below with Perotti finding Mkhitaryan in the right-sided half-space just outside Inter’s penalty area. Width is provided by the full-back, which allows Mkhitaryan to receive in space sine Biraghi cannot push onto him due to the wide threat. 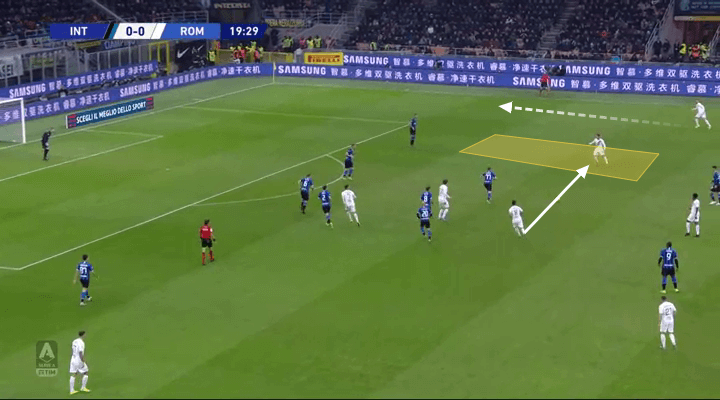 Roma’s setup caused Inter a lot of problems all over the pitch except for in the penalty area where Inter were mostly quite comfortable due to Roma’s lack of a constant threat. Therefore the setup was successful in terms of dominating possession in the first half, but it failed to give Roma the edge they might have had with a fit Džeko up front.

Roma defended in their 4-2-3-1 which sometimes changed into a 4-4-2 or 4-2-2-2 and it was clear that the objective was to stay extremely compact in the central areas to force Inter wide. Inter excel with combination play in central areas so the plan was logical. We can see Roma’s base defensive setup in the image below with a good defensive line, closely supported by the two defensive midfielders who made sure there were next to no space between those two lines. 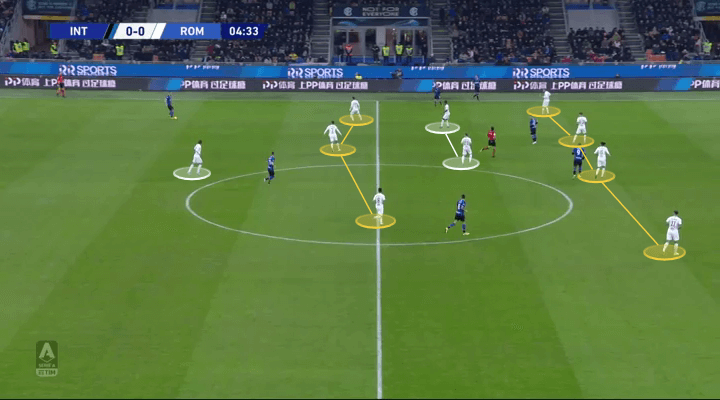 In the image below, we can see how Roma wanted to steer Inter into the wide areas. They very rarely pressed Inter’s three centre-backs and instead focussed on closing off passing lanes into midfield. The wingers were as narrow as they were in possession to make sure Roma’s coverage of central spaces was excellent. Here, Diego Godín has no option but to go wide, where Kolarov is waiting to press Antonio Candreva. Inter’s possession was often limited to the predictable moving of the ball from side to side in the back-three. This meant Roma always had good control of the crucial central areas. 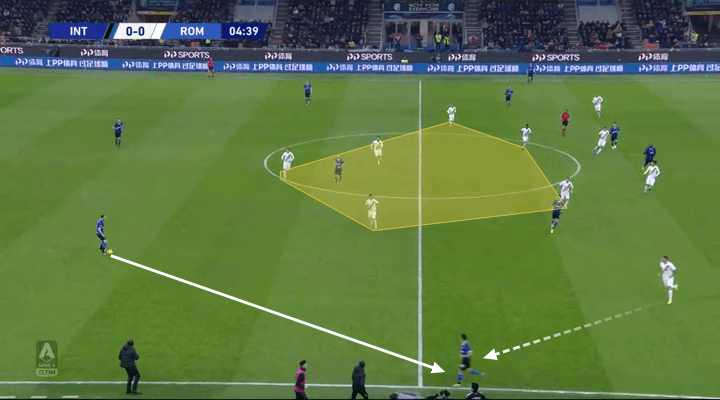 Again, in the image below we can see how Roma were very narrow and forced Inter wide. This had the great success of limiting the influence of Brozović as Inter struggled to create the effective vertical passing combinations they usually excel at. Part of Inter’s struggles in possession was due to their unconnected midfield. So far this season, this had been a strength – with the likes of Brozović, Barella, and Sensi excelling for Conte’s side. By contrast, Valero and Vecino failed to impose themselves in a similar manner to what we have seen previously. As we can see in the image below, the midfield three were too far apart and rarely connected to each other. This had the effect of removing Inter’s ability to combine centrally and made it so much more simpler for Roma to defend the central areas. 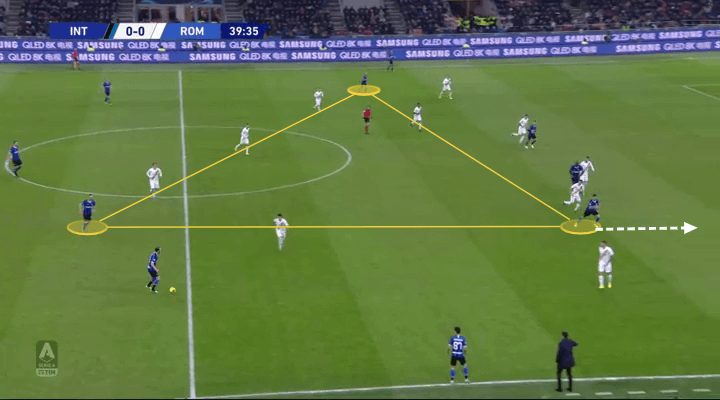 As seen above, Vecino would often look to make runs in-behind Roma’s defence and this became a method Inter started to use to progress the ball. Vecino would constantly make runs like the ones highlighted above and in the image below, which made it more difficult for Roma’s midfielders since one of Diawara and Jordan Veretout often had to track the run, destabilising Roma’s midfield setup in the process. 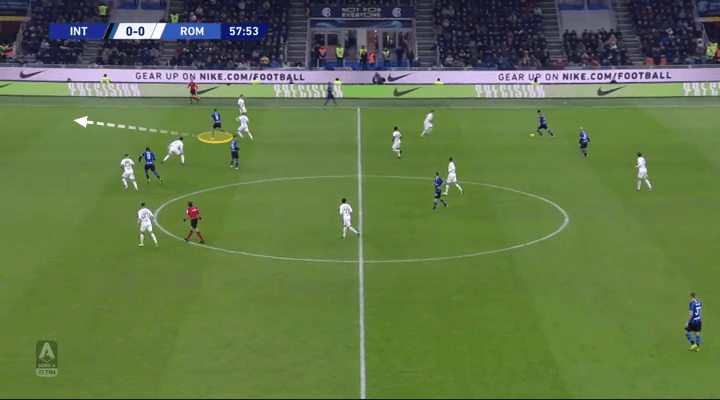 Inter’s best chance in the second half came from one such run, highlighted below when Vecino made a run in-behind Smalling. Firstly, De Vrij plays the ball into Lautaro Martínez. Secondly, the striker lays the ball off to Valero, who plays it into the path of Vecino who is through on goal but fails to find the back of the net. Nevertheless, it was a brilliant move by the home side. 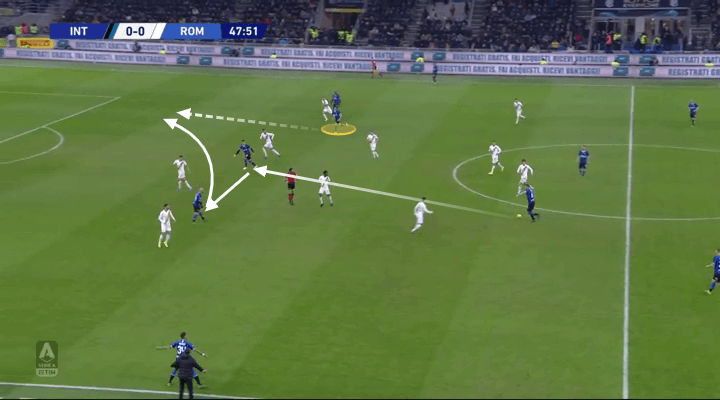 Martínez, in particular, started to make runs into depth as Inter struggled to play through Roma and reverted to playing over them instead. In the image below, Godín clips the ball into the Argentinian who gets away from Gianluca Mancini. 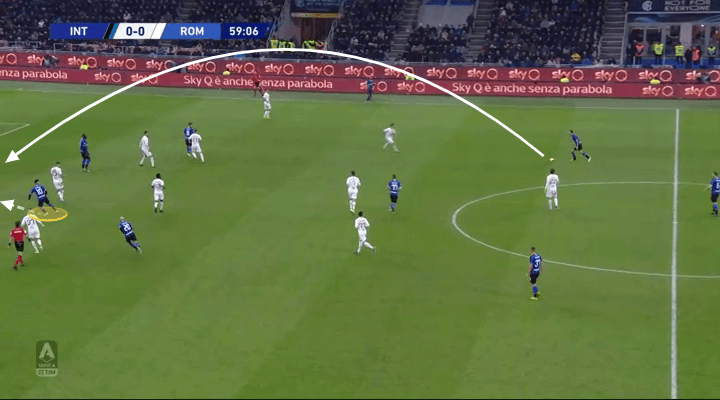 Inter’s new approach worked quite well since it created a more chaotic second half where they managed to control the chaos better than Roma did. It also broke up the pattern and rhythm of the first half when Roma largely were in cruise control. Still, they didn’t find the winner they were looking for.

As this analysis has shown, Antonio Conte and Paulo Fonseca engaged in a very interesting tactical battle that saw them cancel each other out. Roma will be the happiest given they earned a point in a tough away game while Inter will rue their inability to get the three points in a weekend when Juventus lost. However, the draw was fair and both sides should be pleased with their performances.