This match saw the first in La Liga against the last. While Real Madrid looked to extend their leadership position, Espanyol knew this was one of their last chances to avoid relegation. The Catalans had a new manager in Rufete after firing Abelardo the day before, but couldn’t get any points from the match and now sit last in the table ten points away from the safe zone.

Real Madrid controlled the match and even if they didn’t create a lot, they did enough to win comfortably. A moment of magic by Benzema was enough to give them the victory and take one more step to their first La Liga title since the 2016/17 season, ending Barcelona’s reign in the domestic competition. In this tactical analysis, we will go through the most important points in both teams tactics as predicted by many gambling and casino sites. 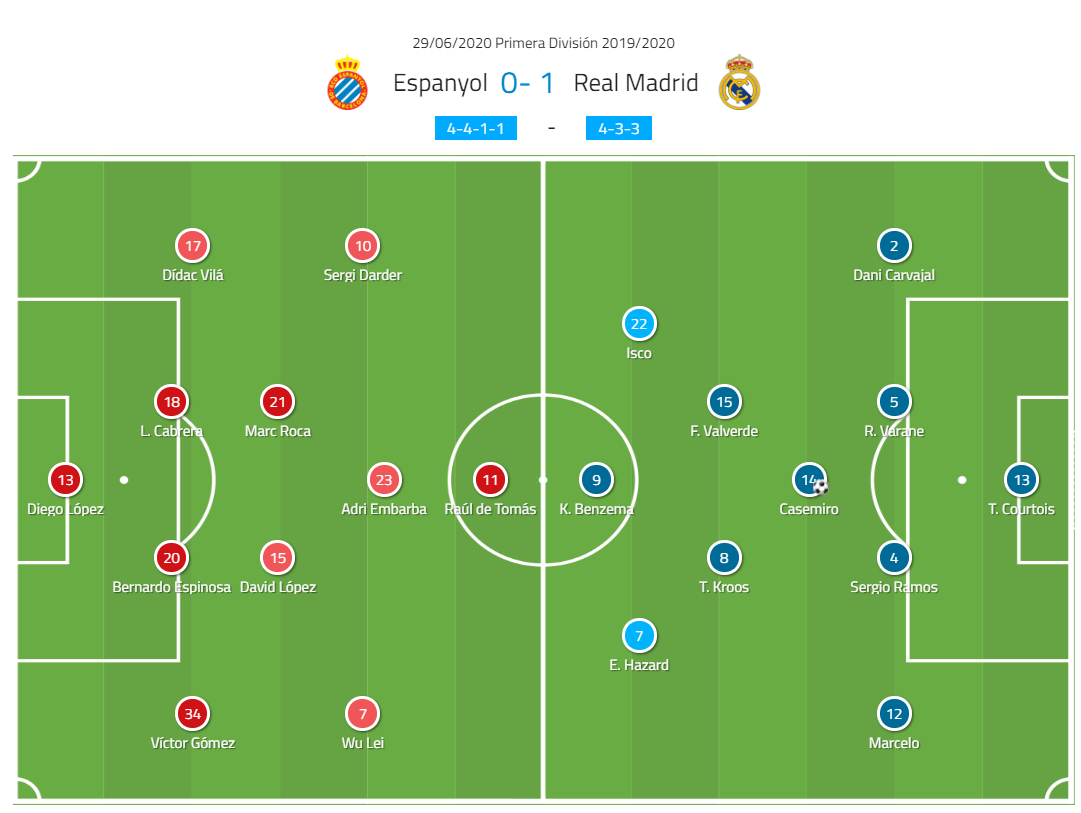 Espanyol formed with a 4-4-1-1 formation, with Sergi Darder and Wu Lei on the wings tracking back and defending Real Madrid’s full-backs and Adrián Embarba and Raúl De Tomás having less defensive responsibilities and being the target of the long balls. They changed their whole defensive line, with David López playing in midfield and Wu Lei coming in for Víctor Campuzano. De Tomás was back from injury and replaced Jonathan Calleri upfront.

Real Madrid also made a lot of changes from their previous match. Marcelo, Kroos, Isco and Casemiro rested against Mallorca and started this match. They used a 4-3-3 on paper, but Isco often came inside, Federico Valverde provided width on the right and Eden Hazard was free to move around the attacking line, so it looked more like a 4-4-2 with a diamond in midfield. Marcelo also had a lot of freedom to come to central positions.

Real Madrid dominated the match with a total possession of 69%. 70% of their 94 possessions reached the opposition half, while Espanyol could only do it in 48% of their 83 possessions. The length of possessions also explains this control: Real Madrid averaged 24 seconds per possession, with Espanyol averaging just half with 12 seconds. Also, Real Madrid had 11 possessions of more than 45 seconds and Espanyol only one. This control was maintained most of the time and only in the last 15 minutes Espanyol increased their possession but wasn’t enough to score. 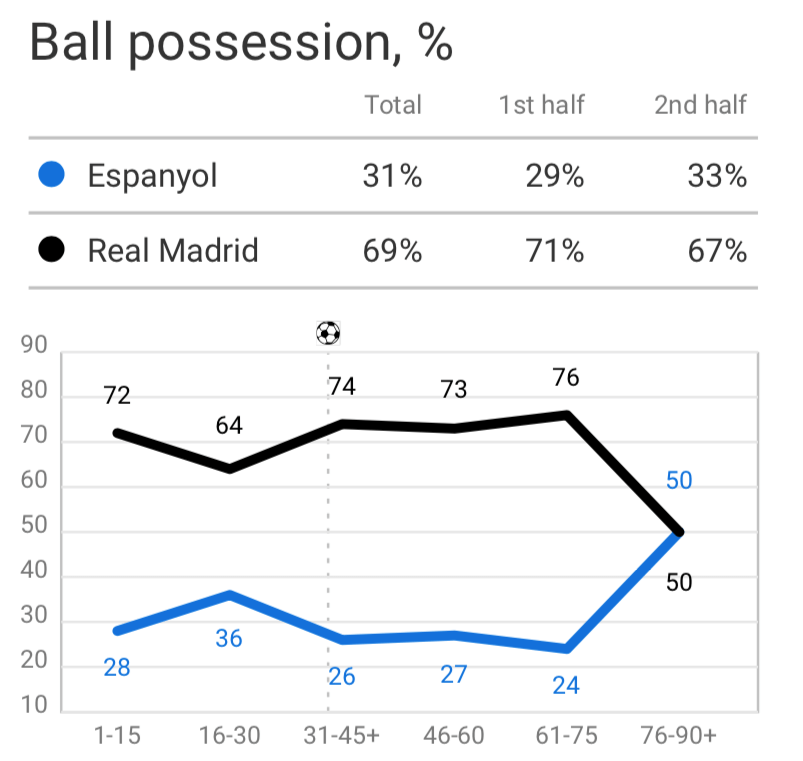 This dominance can also be appreciated in the following charts. Real Madrid played very far from their goal (56.8 meters on average), forcing Espanyol to stay very deep (44.4 meters) and to make huge efforts to reach the goal. The passes per defensive action metric also shows how Real Madrid pressed more intensely during most of the match, forcing risky passes from the Espanyol players and recovering the ball quickly. This way, Real Madrid recovered 36 balls in the opposition half and only 30 in their own third, proving how effective their pressing was as we will see later in this analysis.

Espanyol didn’t press very intensively during the match. They let the centre-backs play and stayed near the halfway line, often retreating to their own half and letting Real Madrid move the ball from side to side and focusing on defending the central zones, leaving the wings free to stay compact.

When pressing, Espanyol used a 4-4-2 formation, with Raúl De Tomás free and not working a lot as he was coming out of an injury and wasn’t 100% fit, and Adrián Embarba playing between De Tomás and the left-wing to take advantage of the spaces behind Carvajal but also of the direct balls played to De Tomás. On the wings, Darder and Wu Lei were chosen for their hard work and they followed the full-backs and helped the defensive line. 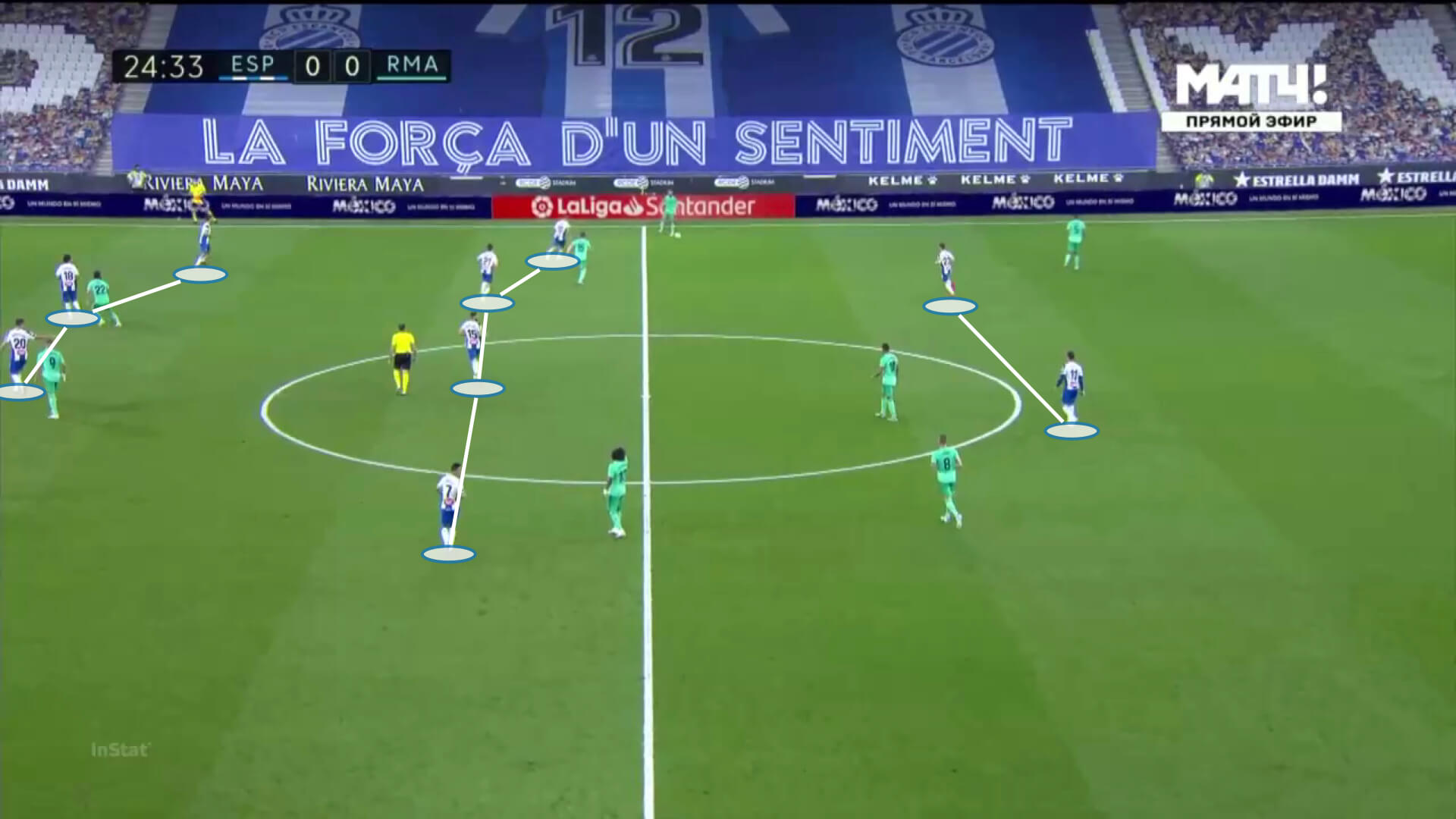 Espanyol usually recovered the ball very far from Real Madrid’s goal, so they looked to play directly to De Tomás and win second balls with Embarba and Wu Lei around him. They didn’t look to elaborate a lot and even if De Tomás was quite good holding the ball and winning aerial duels, this tactic wasn’t very effective as Espanyol couldn’t commit many players forward.

Most of the danger Espanyol could create came from Wu Lei. The Chinese winger looked to exploit the space behind Marcelo’s back and his slow defensive transitions, making very good runs with and without the ball. Kroos often tried to cover this, but he isn’t quick enough and Real Madrid had problems defending the left flank. In fact, Espanyol’s clearest chance ( xG) came after a long ball that De Tomás headed to Embarba and he passed to Wu Lei, who then missed in front of goal.

A clear example of this is seen below. Espanyol recover the ball deep in their own half and Wu Lei starts a lighting run, leaving Marcelo and Kroos far behind to receive a pass and run at the defensive line. The spaces on the left side of Real Madrid’s defence were often huge and easy to exploit, and only Wu Lei’s lack of quality in his end product prevented Espanyol to create even more danger. 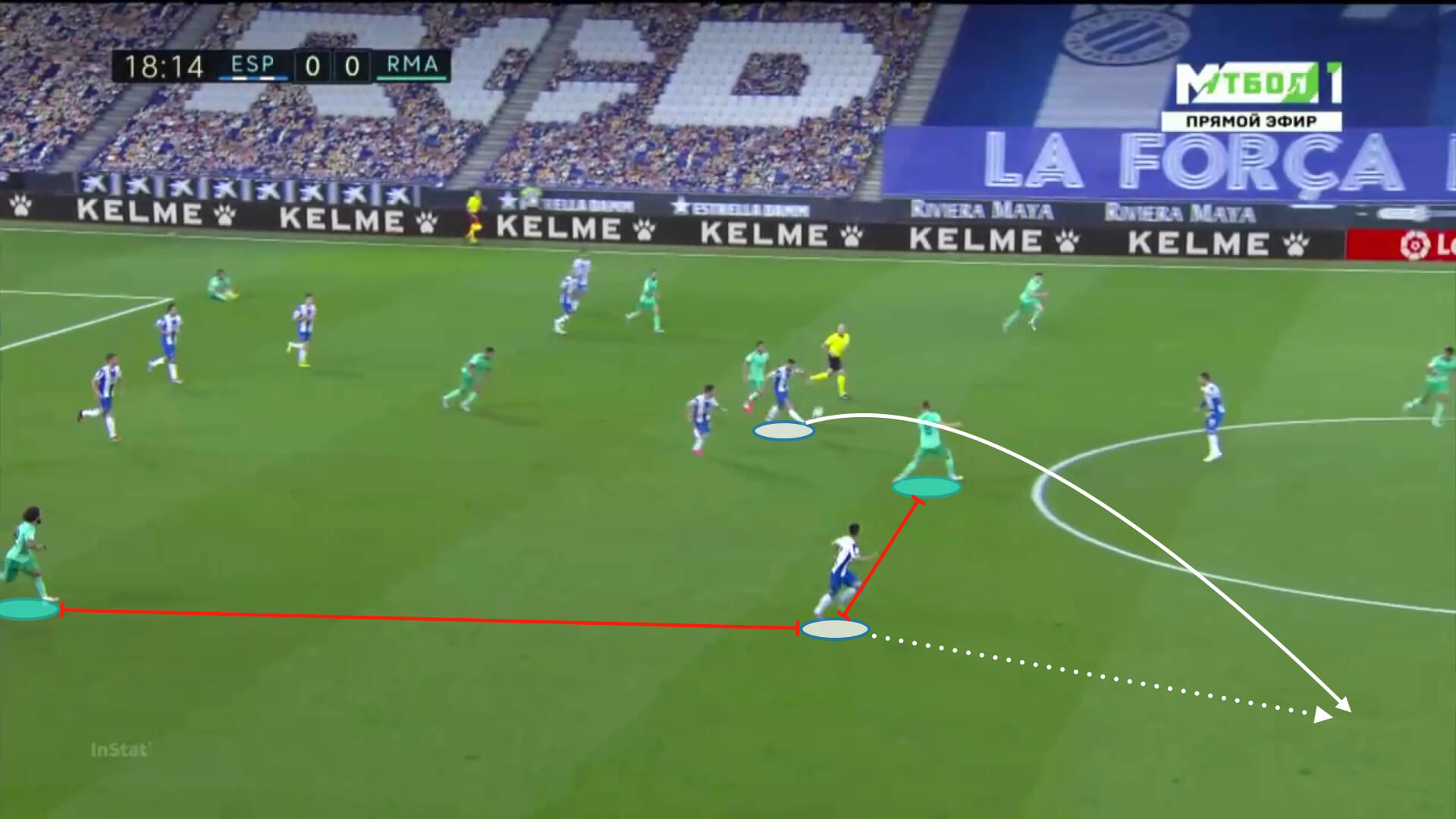 In the picture below we see how Wu Lei recovers the ball, plays a good pass to Embarba and attacks the space behind Kroos and Marcelo, getting the ball back in the final third. They tried to repeat this play but weren’t very successful. 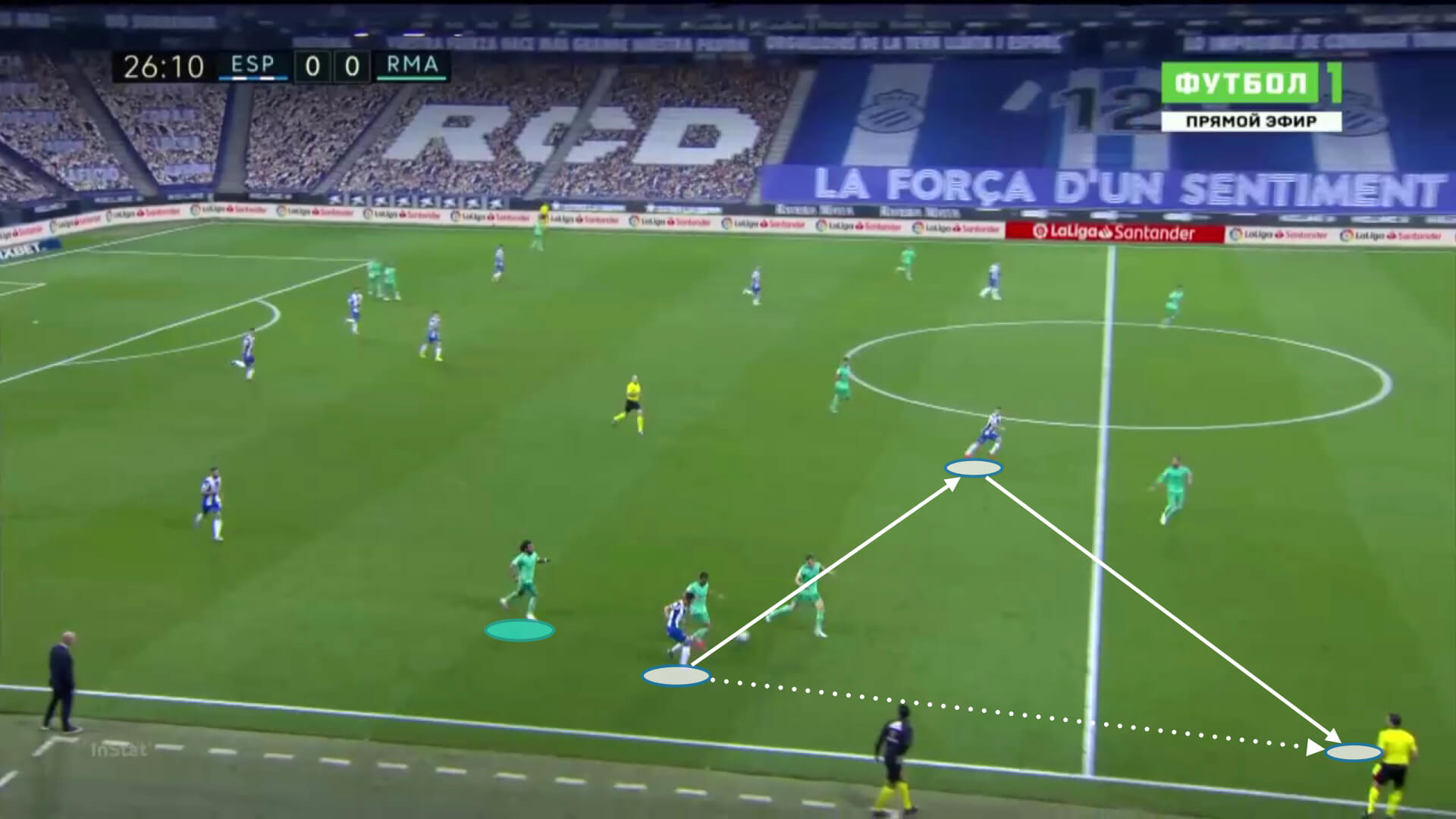 Again below, one of the few times Espanyol managed to recover the ball in the opposition half, Marcelo was caught out of possession and Kroos had to defend the wing, allowing a dangerous cross that led to a good opportunity. Espanyol didn’t create much apart from these chances that came through exploiting the spaces left by Marcelo. 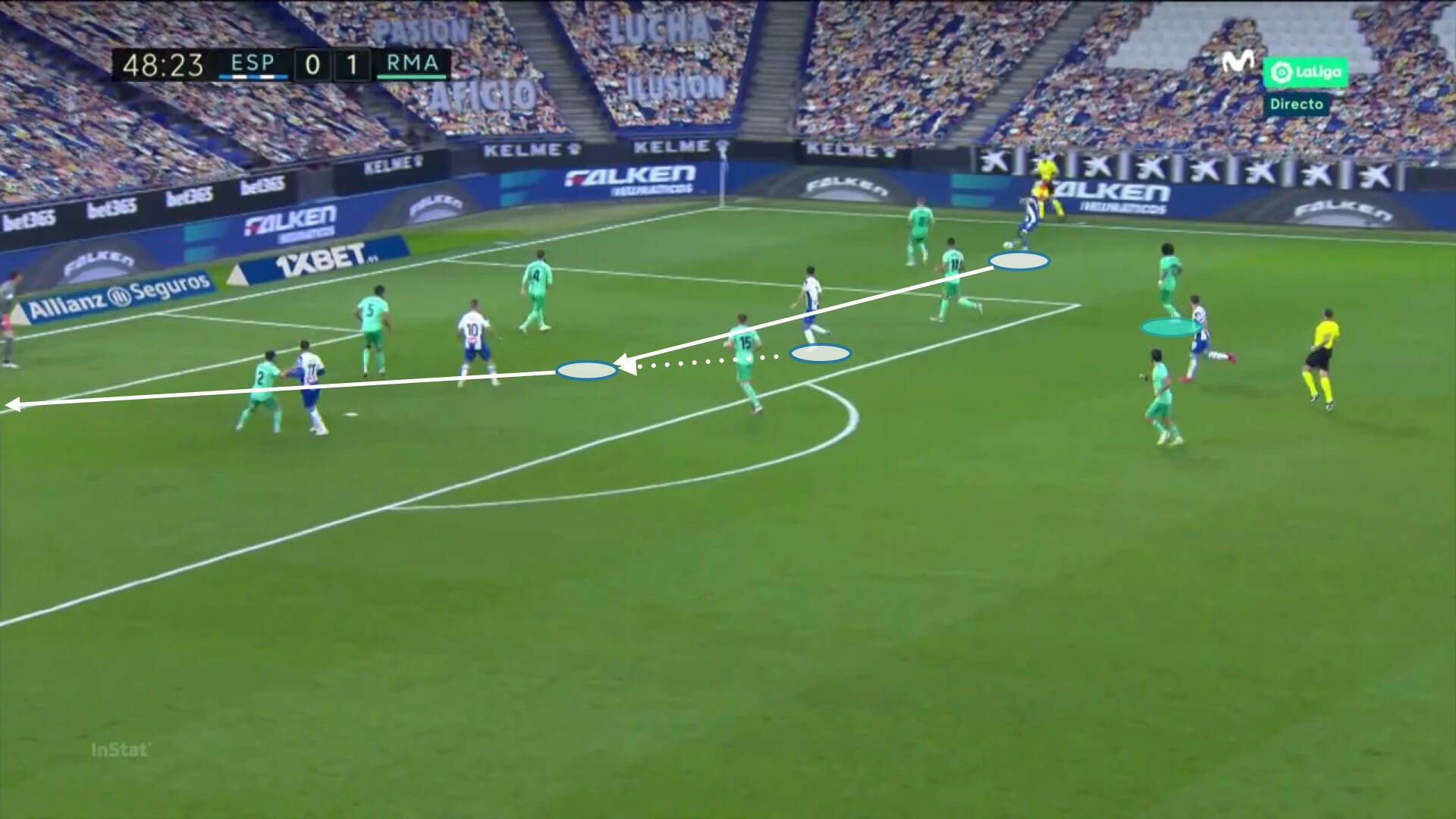 Real Madrid: long possessions and lack of presence in the box

Real Madrid controlled the game well, pressing Espanyol very high and forcing them to play direct balls, where Ramos and Varane managed to control De Tomás. As we saw before in this tactical analysis, only the left side was a problem for Real Madrid’s defence, but still, Espanyol couldn’t create much.

Real Madrid pressed high but not very aggressively. They focused on covering all the short passing lines and let Espanyol centre-backs play long passes knowing they could control this with Casemiro, Ramos and Varane. When pressing, they maintained their 4-4-2 diamond formation, with Benzema and Isco pressing the centre-backs. Sometimes Valverde and Isco exchanged positions and the Uruguayan added intensity and aggressiveness to the press. Casemiro was always acting as a sweeper behind the two pressing lines, marking the players who tried to support the ball possessor and intercepting lots of passes.

Below we see Real Madrid’s formation when pressing. Espanyol rarely found Roca to play out from the back and were forced to play long balls or risk a lot if they wanted to play short. 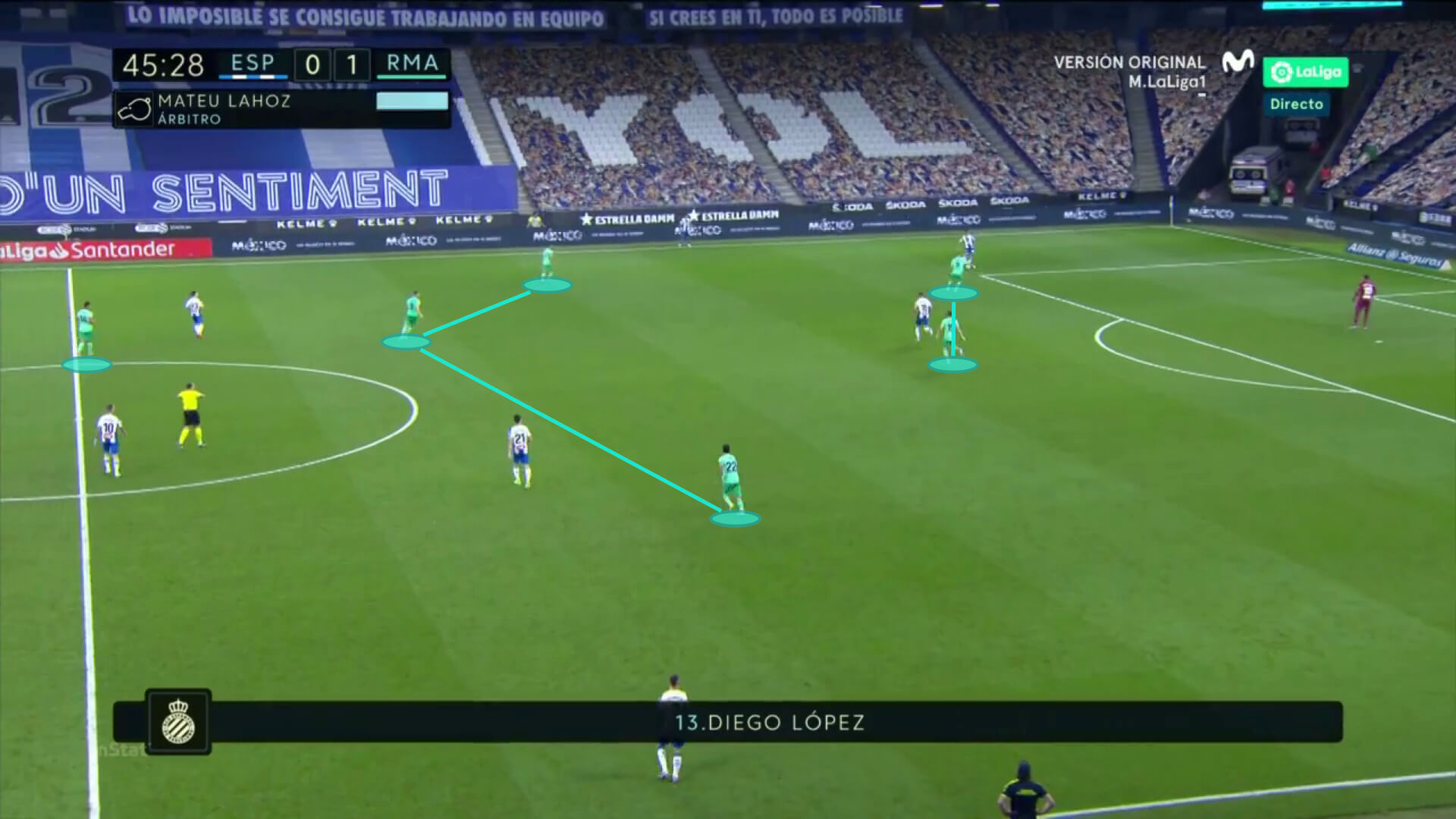 The few times Espanyol could play through Real Madrid’s press, they found spaces to run as Real Madrid were left disorganized and conceded spaces to play and run. We can see this in the picture below, where a pass surpasses Kroos and Marcelo has to leave his position to press, leaving a huge space behind him for Wu Lei to attack. Anyway, Espanyol didn’t look to keen on taking risks and Real Madrid managed to minimize the few pressing mistakes they made. 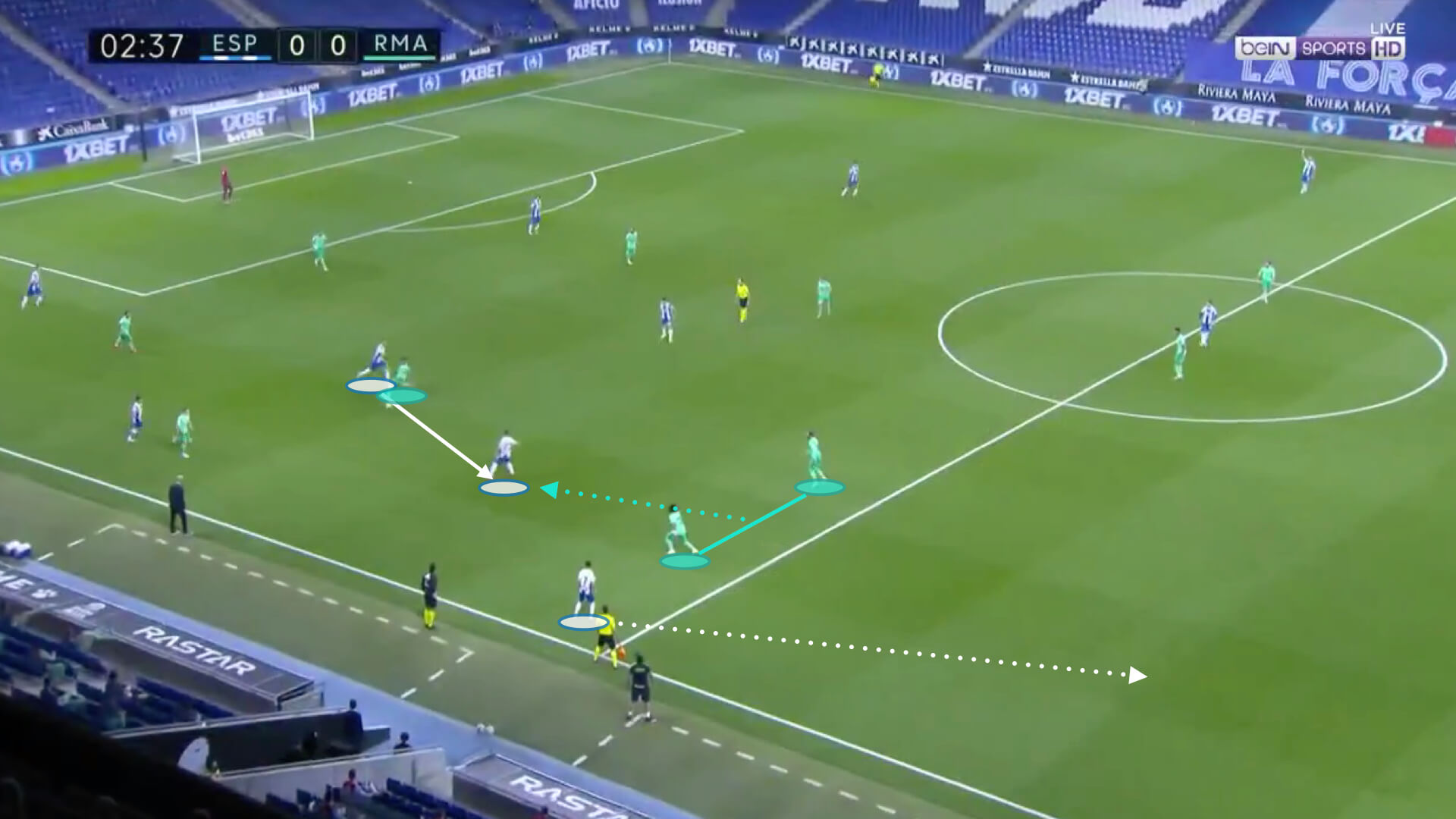 When playing from the back, Isco and Casemiro tried to get the ball from the defenders, Valverde and Carvajal created width by getting near the right touchline and Kroos came deep to let Marcelo move freely. Marcelo adapted his movements to those of Hazard, who could be seen on the left-wing or just behind Benzema. Espanyol didn’t press, so Real Madrid reached the opposition half very easily most of the time.

Once in a positional attack, Isco, Hazard and Benzema moved all around the front line, coming deep to take the ball and drifting wide to create numeric superiorities. Marcelo interpreted their movements very well and played a free role too, balancing the movements of the front three and appearing in unexpected positions.

Take a look at the picture below. We can see the diamond in midfield, with Kroos dictating from the LCM position and Marcelo drifting inside to generate spaces for Hazard, who’s on the left-wing. On the opposite side, Valverde generates width and is an option if Kroos wants to switch the game. 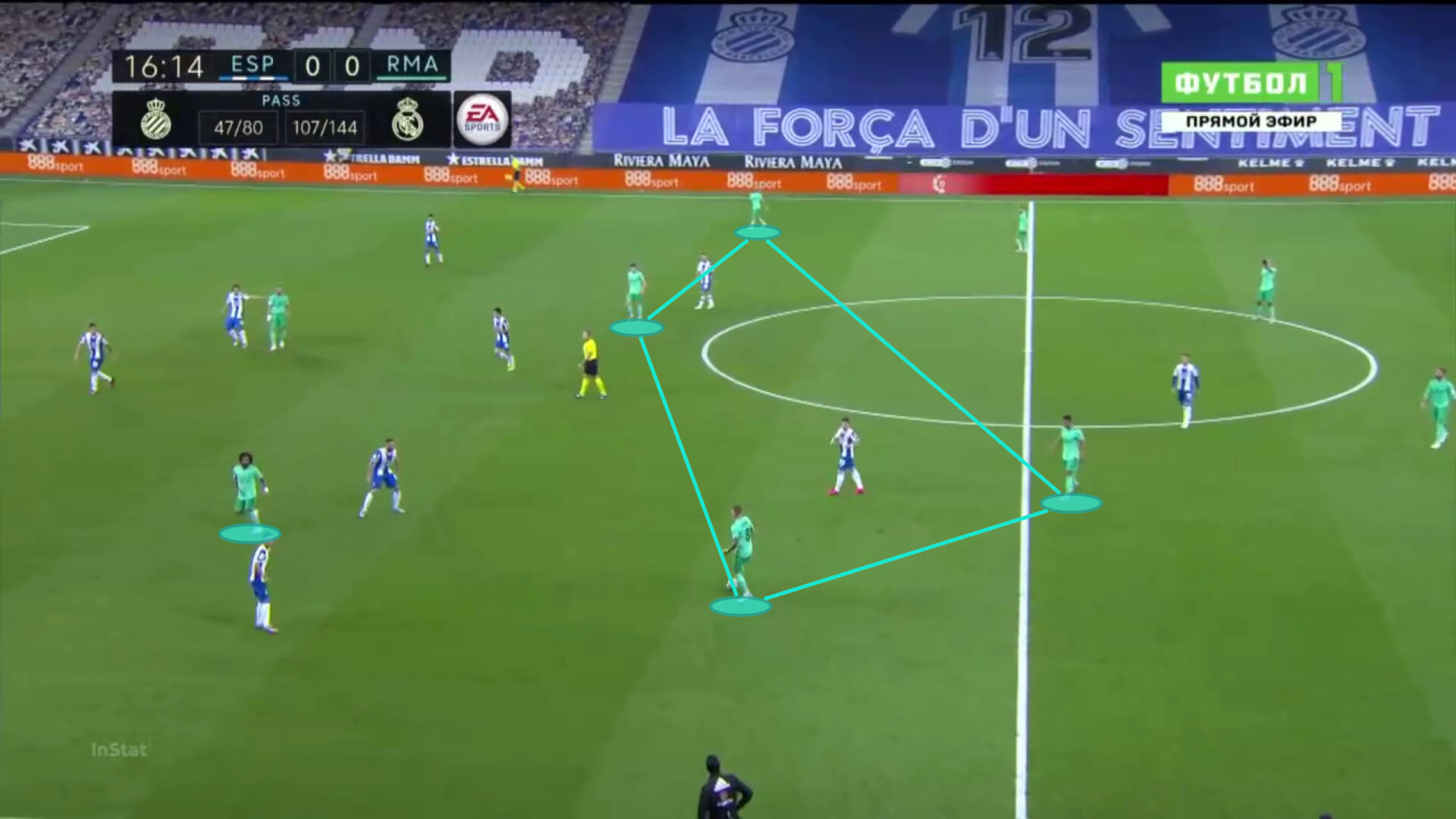 Isco was in charge of connecting the midfield and the attack, and even if he was the right-wing on paper, he played very centrally. Below we can see how he passes the ball and moves between the lines to receive it back. Marcelo starts running early to attract players and give more passing options to Isco. 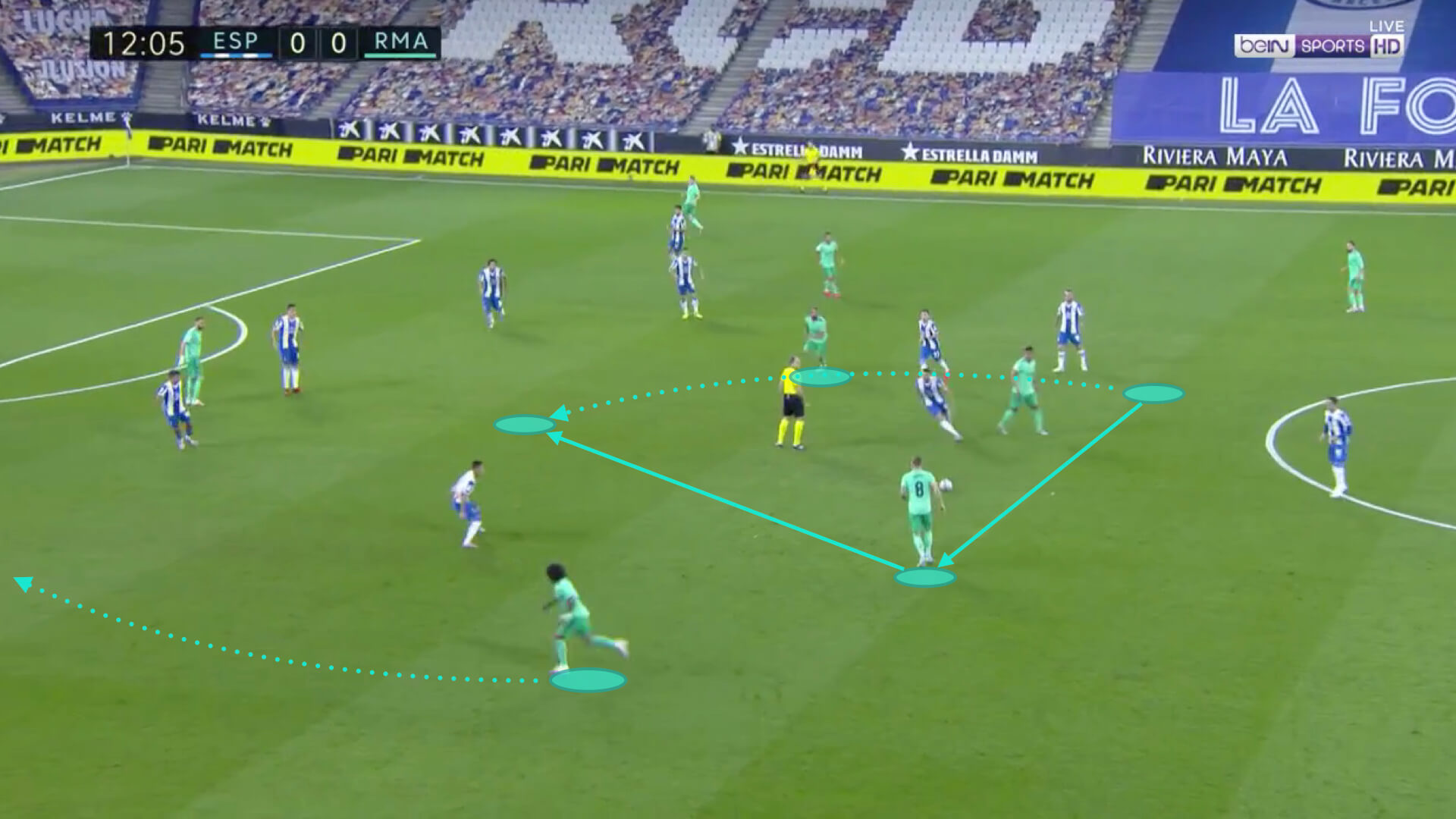 In general, Real Madrid attack’s were very fluid, with players changing positions and trying to disorganize the rival making it difficult for them to man-mark. A perfect example of this is the picture below. We see Isco on the ball, Marcelo as the more advanced player, Benzema on the left-wing, Hazard, Valverde and Casemiro around the edge of the box and Kroos dictating from deep. This mobility allowed Real Madrid to have long ball possessions, creating advantages in various zones of the pitch and moving the ball around quite efficiently. 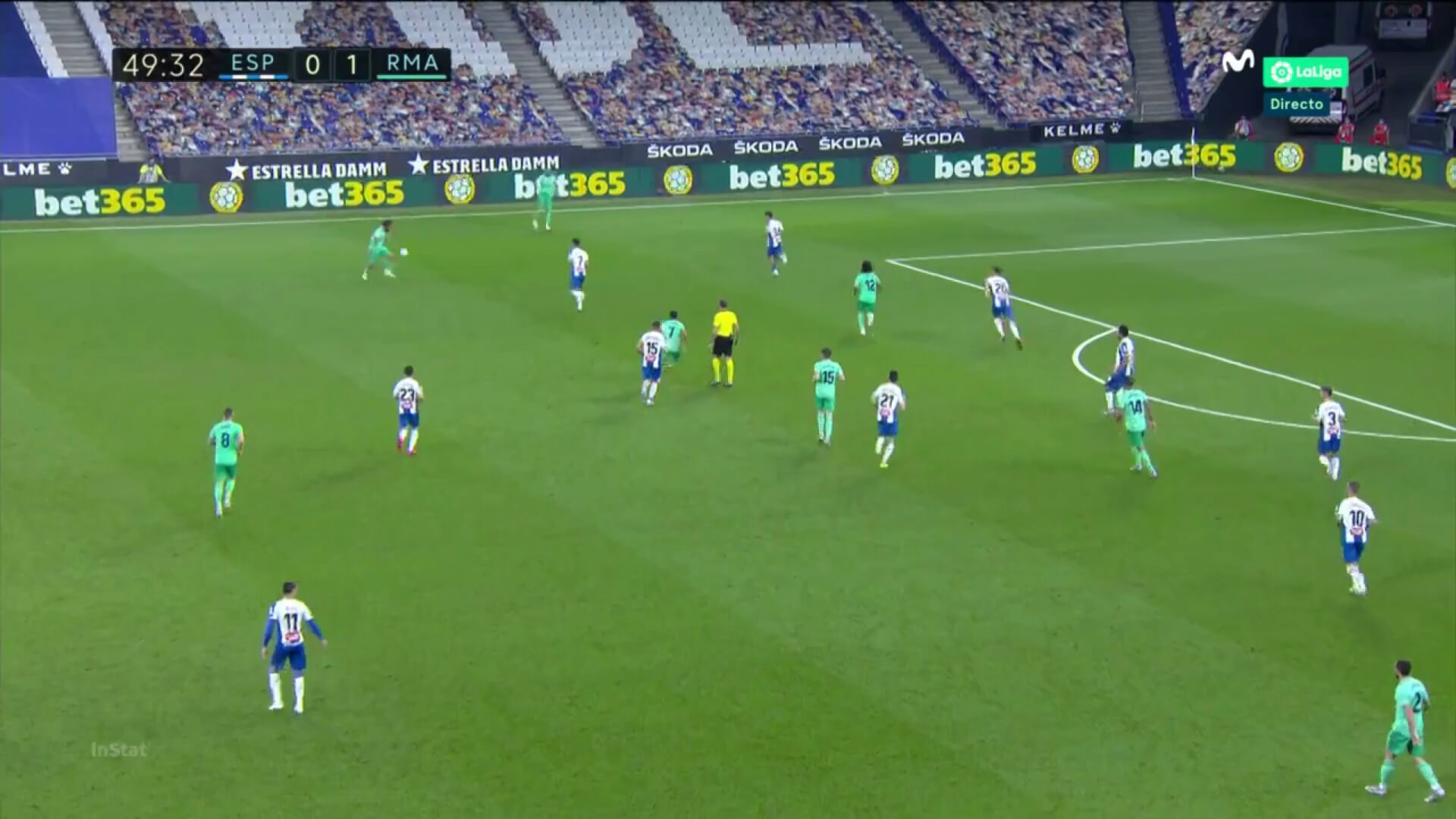 However, Real Madrid’s positional fluidity led to a lack of presence in the box. Benzema often came deep to receive the ball and act as a number 10, but no one replaced him as a threat in the box or with runs in behind, so Real Madrid were often plain and lacked depth. With Benzema always near the ball, his team were in control of possession and he tried to create for his teammates, but there weren’t enough players in front of him attracting the attention of the centre-backs and generating spaces.

In fact, Casemiro had more touches in the box (6) than Benzema (5), with Hazard having only four touches too. Casemiro’s late runs into the box and his good positioning during and after set pieces made him the most important threat of Real Madrid. The Brazilian defensive midfielder scored the only goal of the match staying up after a set-piece play and receiving a magical backheel pass from Benzema but also had other chances than amounted to a total of 0.88 xG.

A good example of this lack of presence in the box is seen below. Isco has the ball on the right-wing with Benzema and Valverde close to him. Hazard is the in the striker position, but he also looks to receive the ball at his feet and doesn’t attack good positions inside the box. This allowed Real Madrid to have very good passing options to maintain possession but not to advance into the box, and only 13% of their positional attacks ended with a shot. 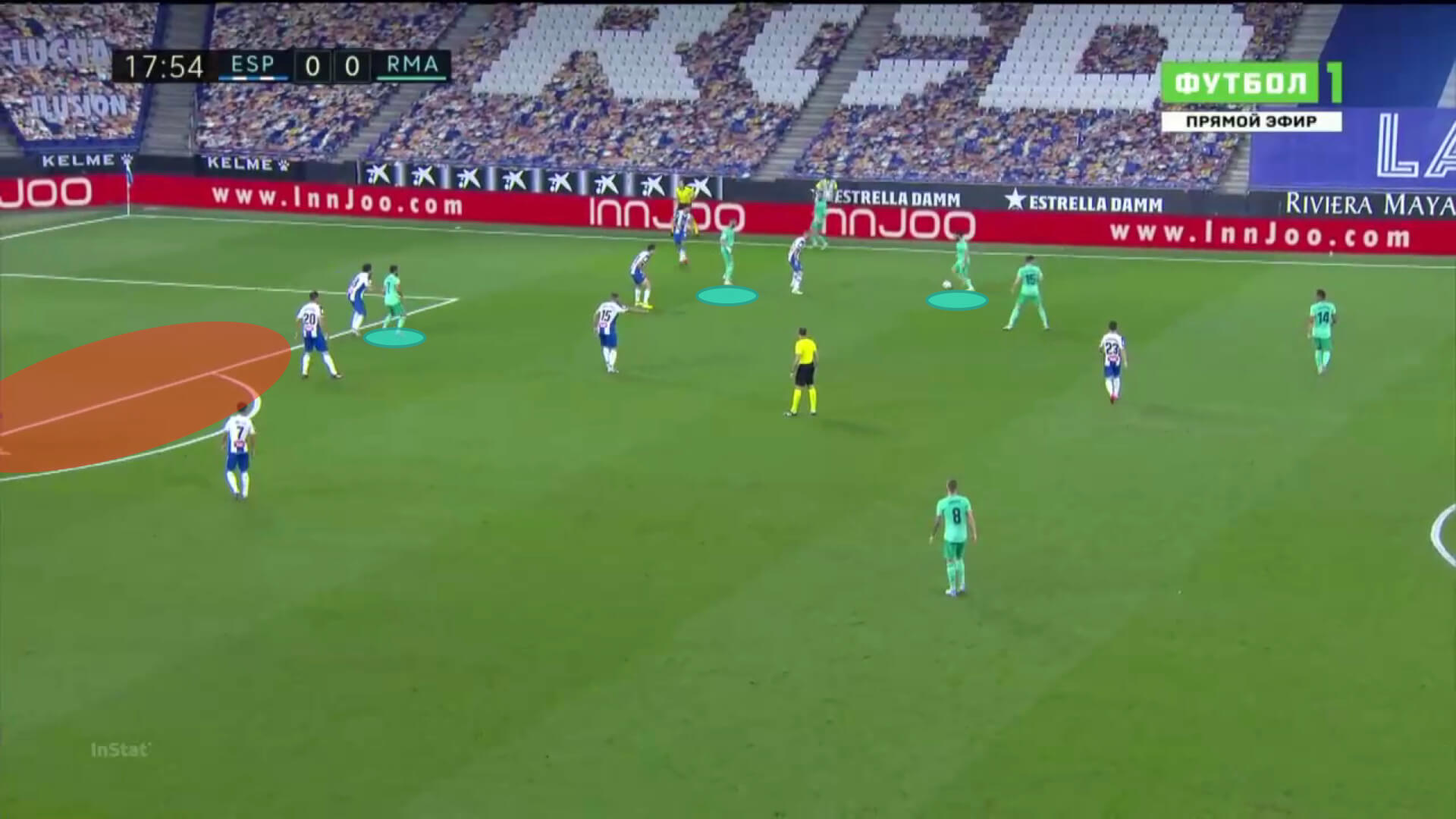 Espanyol didn’t play a bad match and knew where to find the spaces to attack Real Madrid. Unfortunately for them, they weren’t accurate enough in front of the goal and didn’t deserve to win or draw.

Real Madrid saw their plan go well, getting a routine win and putting all the pressure on Barcelona, who have to win against Atlético to keep their title options alive.