Wolverhampton Wanderers hosted Espanyol in the first leg of their Europa League Round of 32 matchup. Despite winning only one of their last nine matches in all competitions, Wolves have still maintained a strong season, sitting in eighth place on the competitive Premier League table. Espanyol, after a strong 2018/19 season saw them finish seventh in La Liga and obtain a Europa League qualifying berth, have struggled domestically and currently rest at the bottom of the table. This tactical analysis will examine the systems both sides applied and explain the methods Wolves used to take over the match. 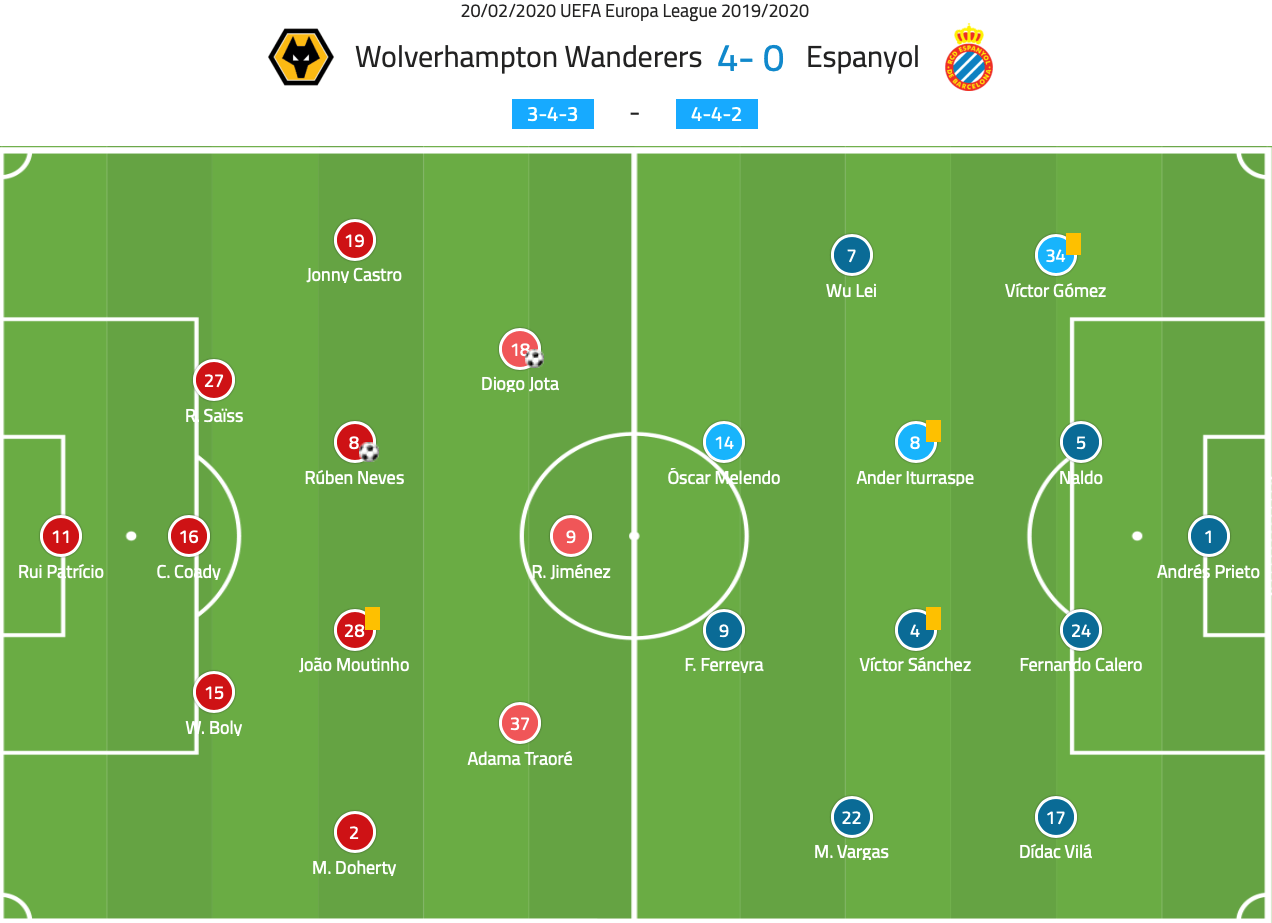 Nuno Espírito Santo’s side utilised their common back five/back three formation. Centre-back Willy Boly played alongside Conor Coady and Romain Saïss and has been in fine form since returning from injury. Matt Doherty and Jonny Castro started as the wing-backs on both sides of midfielders João Moutinho and Rúben Neves. In attack, Adama Traoré, club-leading goalscorer Raúl Jiménez, and Diogo Jota created a fast, dynamic front three.

Espanyol manager Abelardo Fernández, in just his ninth match in charge at the club, sent his team out in his preferred flat 4-4-2 formation with a number of changes to the lineup. Andrés Prieto started in goal over Diego López. Víctor Gómez, Naldo, Fernando Calero, and Dídac Vilá filled out the back four. Wu Lei, who was Espanyol’s most aggressive shot taker during the match, was positioned wide right beside Víctor Sánchez, Ander Iturraspe, and Matías Vargas in the midfield. Óscar Melendo and Facundo Ferreyra were selected to complete the formation over Jonathan Calleri and January signing Raúl de Tomás as the two strikers. These changes were likely an effect of Fernández prioritising La Liga survival over Europa League results.

Despite sitting higher up on their respective league table, Premier League side Wolves opted to concede possession to Espanyol for a majority of the match. The visitors, as a result, held 57% possession and were generally able to carry this into the attacking half. 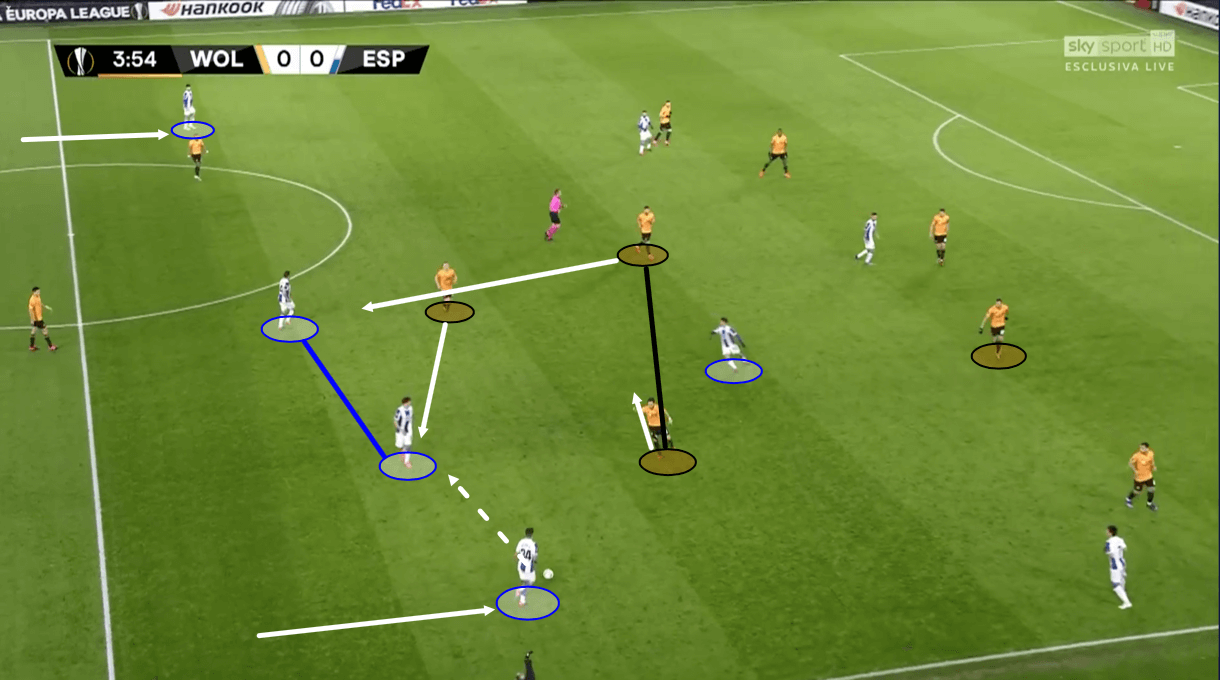 Espanyol attempted passing combinations in attempts to get past the Wolves defensive structure. Early in the match, Espanyol disrupted a Wolves throw-in and retained possession farther up the pitch. With the two full-backs higher up the pitch, Gómez completed a pass inside to Iturraspe. This initiated a press by Jota and the Wolves midfield two. 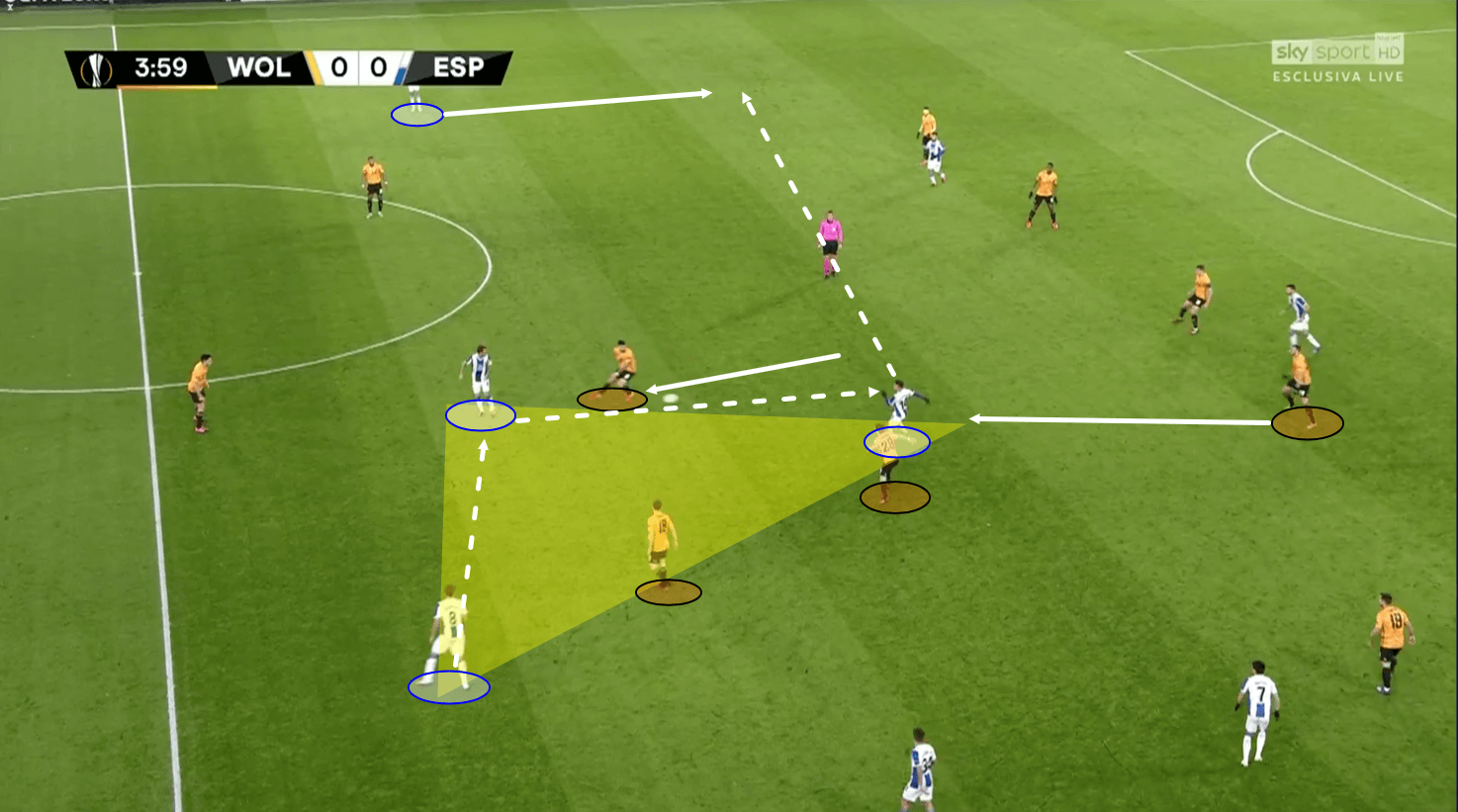 Iturraspe continued the passing connection inside to Sánchez, who was pressed by Neves. Using a passing triangle, Espanyol were able to progress the ball forward to Melendo, who moved to occupy the space Neves vacated. Pressure from Saïss wasn’t enough to dispossess Melendo, who relieved the pressure by completing a switch of play to the ball-far advanced full-back. This device was used multiple times by Espanyol, but while they were somewhat surprisingly able to bypass Wolves defence on occasion, they still struggled to create quality chances on goal. 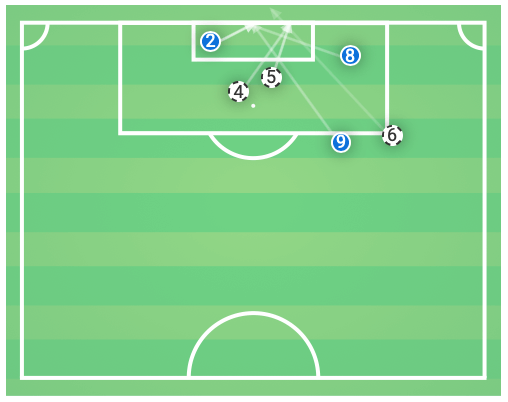 Espanyol’s shot map, seen here, displays both the questionable shot locations and the poor shot quality they presented. Of the nine shots they attempted, only three reached their target, and only one of their total shots (shot number two) had an expected goal value of over 0.19. Additionally, Espanyol have scored the third-fewest goals in La Liga with only 21 in 24 matches, despite placing in the middle of the field in shots per game (10th, 11.5) and average possession percentage (12th, 48.2%).

Not only did Espanyol poorly execute their goalscoring opportunities, but the advanced positioning in possession allowed Wolves to apply their signature counter-attacking manoeuvres.

Utilising the wide areas in attack

With Espanyol possessing in the advanced areas, Wolves were able to find holes in the Spanish side’s structure with relative ease. 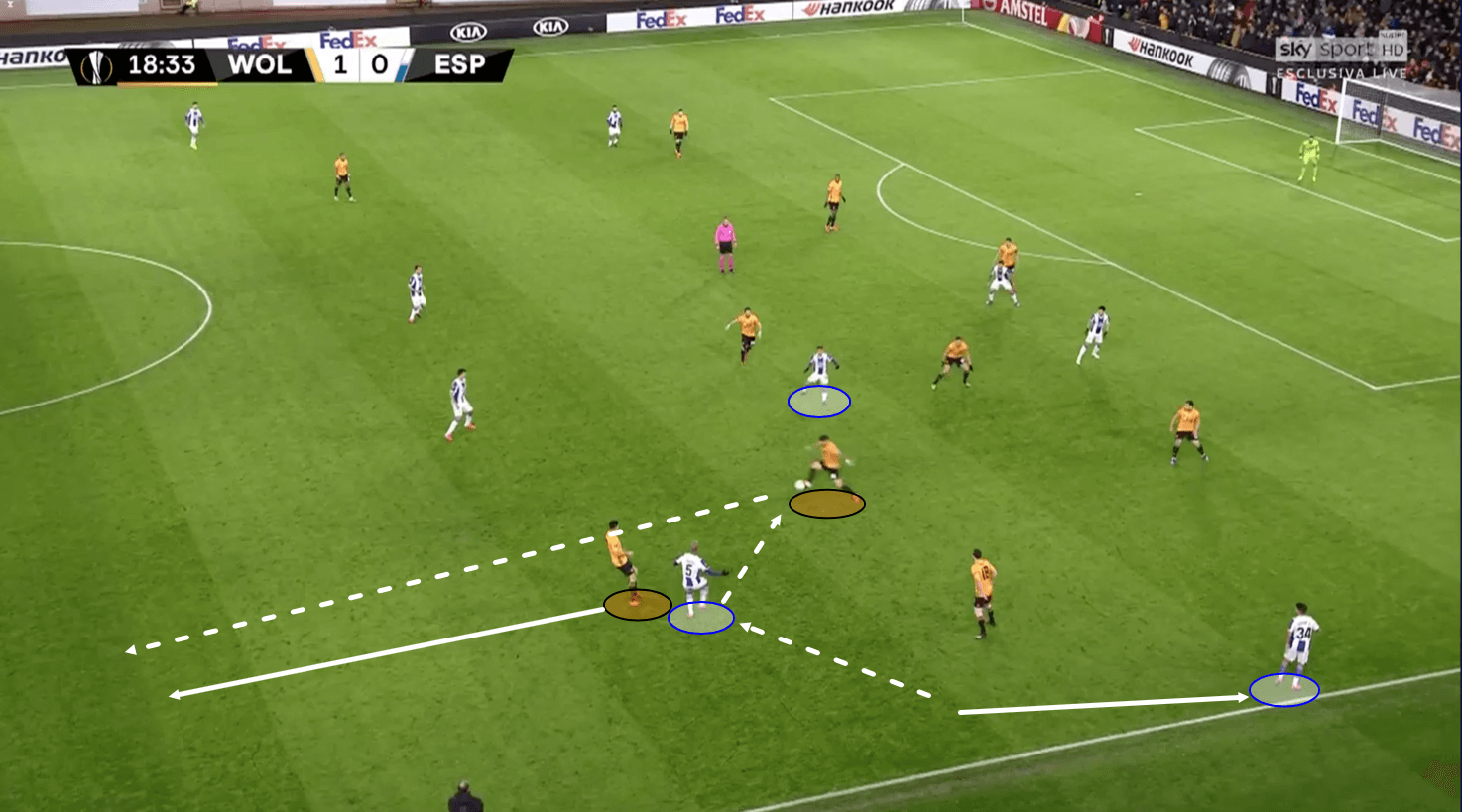 Gómez yet again is seen high up the right touchline in possession. He completes a pass inside to Naldo, who is pressured from behind by Jiménez. This forces the centre-back into a hurried diagonal pass attempt into the right half-space, where it is intercepted by Neves thanks to his strict central positioning. With the Espanyol right-back nowhere near his assigned area defensively, the Portuguese midfielder has the time and composure to complete a long pass forward to Jiménez, who has since turned to make a counter-attacking run.

This was one of the most common ways Wolves exploited the Espanyol advanced positions and penetrated their high lines. These counter-attacks then often progressed through the wide areas of the pitch, through which Wolves used a multitude of techniques to attack. 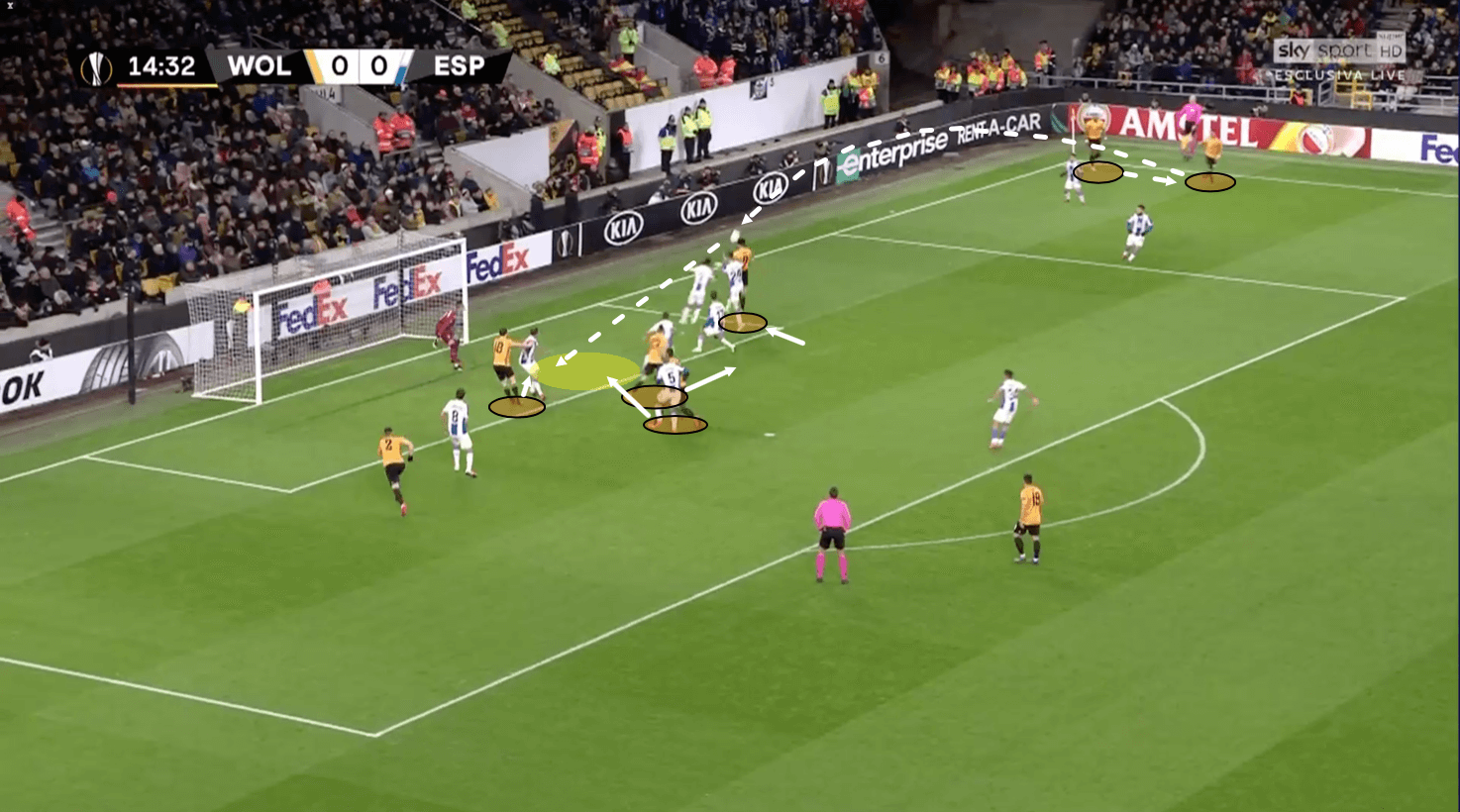 The opening goal came on an intricate corner kick routine. Traoré tapped the ball in to Moutinho. Moutinho then crossed the ball in towards the ball-near side of the six-yard box. Jiménez moved into this area, carrying defenders with him. Saïss’ decoy run wide towards the space Jiménez vacated also lured defenders away from the centre of the box. Jiménez then headed the ball down into an open dangerous area in front of goal, where it was intended that the ball would meet the end of Boly’s run behind Saïss. While the centre-back didn’t quite reach the space in time, Jota acting as a backup target was able to force the ball into the back of the net. Despite the low crossing accuracy by Wolves, crosses were nevertheless a method involved in two of their four goals.

Another tactic seen by Wolves from the wide areas was the stretching of the opposing defence. 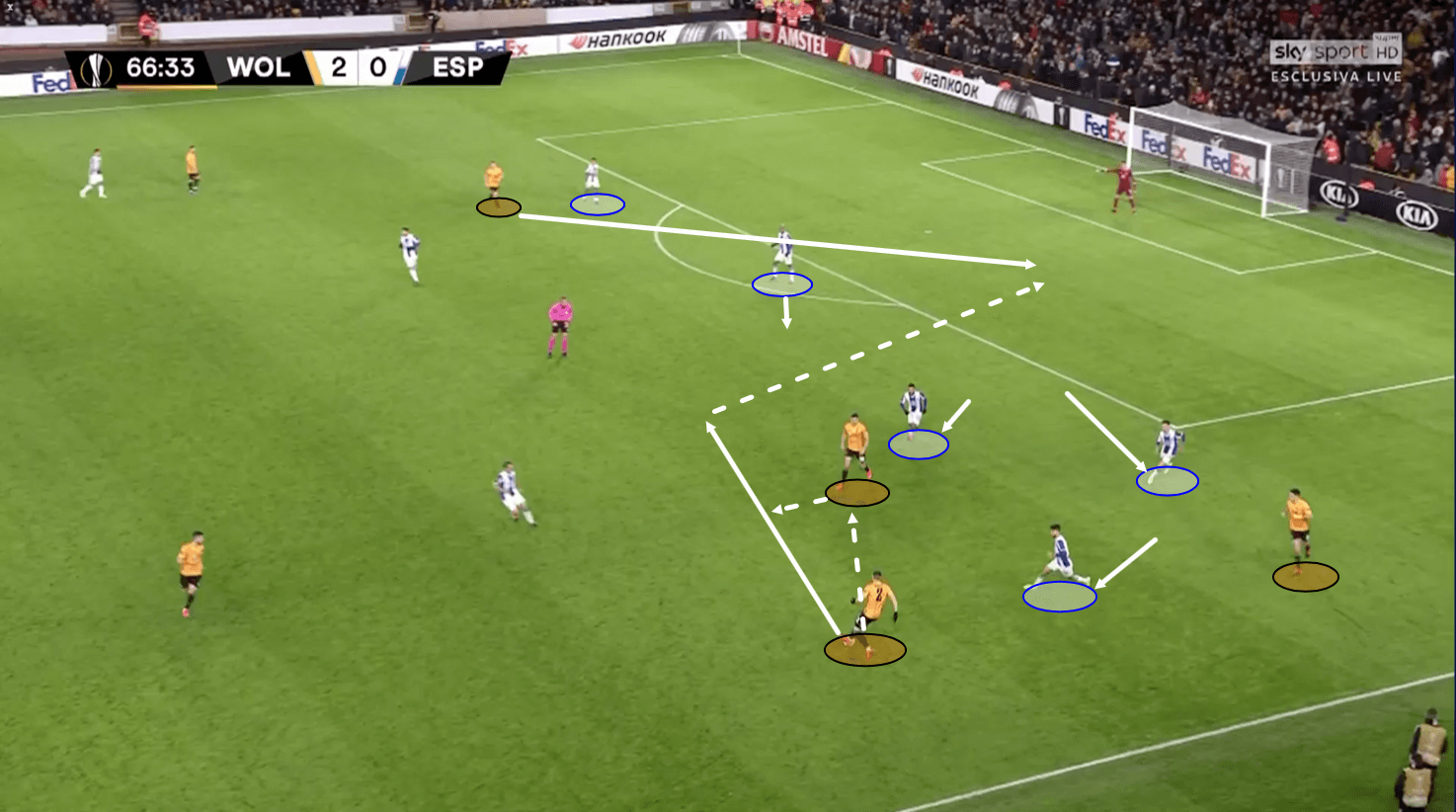 Here, after receiving a long ball switch of play, Doherty saw the Espanyol back line being stretched wide. He completed a dribble centrally, playing a one-two passing combination with Dendoncker in order to pull the deep midfielder forward towards the Belgian. With the left centre-back pulled wide due to Jiménez’s wide positioning, these two movements by the opposition left a gaping hole in the back line. Doherty was then able to complete a pass down into the box on a 2v1 situation between himself, the isolated centre-back Naldo, and Jota, who would score his second of three goals this match on this play.

Despite a startlingly low xG of 0.78, Wolves were able to create chances on counter-attacks utilising the wide areas and long balls. They held a long pass percentage of 15.56%, almost double the percentage of their opponents (8.72%) this match, which is common for the West Midlands club. This direct approach, paired with Espanyol’s leaky defending- they have conceded the most goals in La Liga with 42- led to a comfortable goal tally for the hosts.

Throughout the match, Wolves’ defensive structure was customarily rigid and organised. While Espanyol did manage to reach the attacking half comfortably, part of the struggle to create quality goalscoring chances was due to this rigidity. Of the Periquitos 108 possession losses, 57 of them (over 50%) were in the final third. 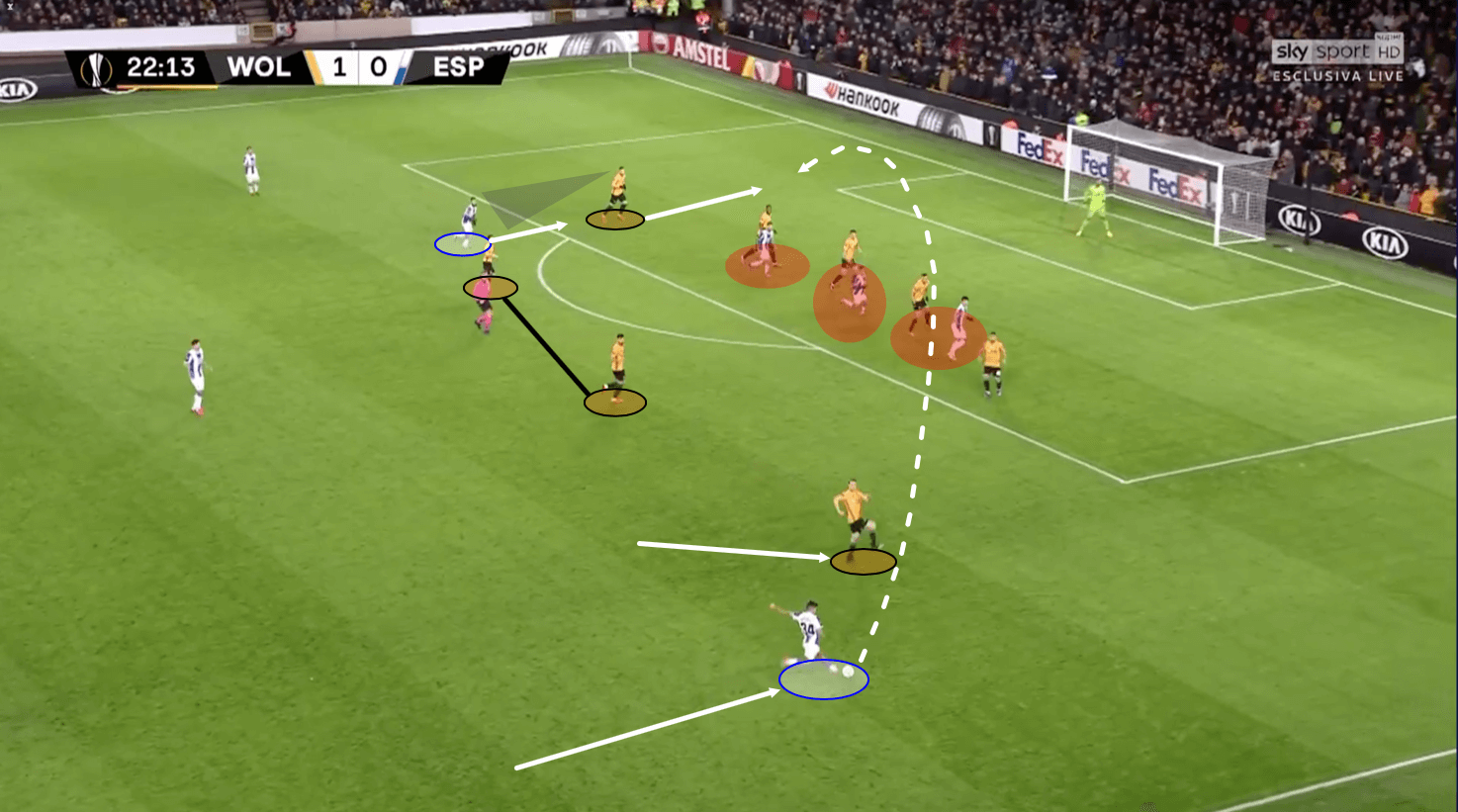 In this scenario, Gómez has possession of the ball and carries it into the final third. Jota’s slight pressure prompts the right-back to hit a long cross into the box. Not only are all three Espanyol attackers in the box marked well by the three Wolves centre-backs, but Doherty is also positioned well in his wide role among the back five to calmly intercept the cross well before the intended receiver can reach it.

As stated, Wolves had a shockingly small expected goal mark. Espanyol also had a low xG of just 0.83, of which the Wolves defending no doubt was a factor.

After the flurry of goals, Wolves shifted slightly to more reserved defensive tactics. Espírito Santo eventually subbed his entire front line out, using the back five shape of his system in a 5-3-2 structure. 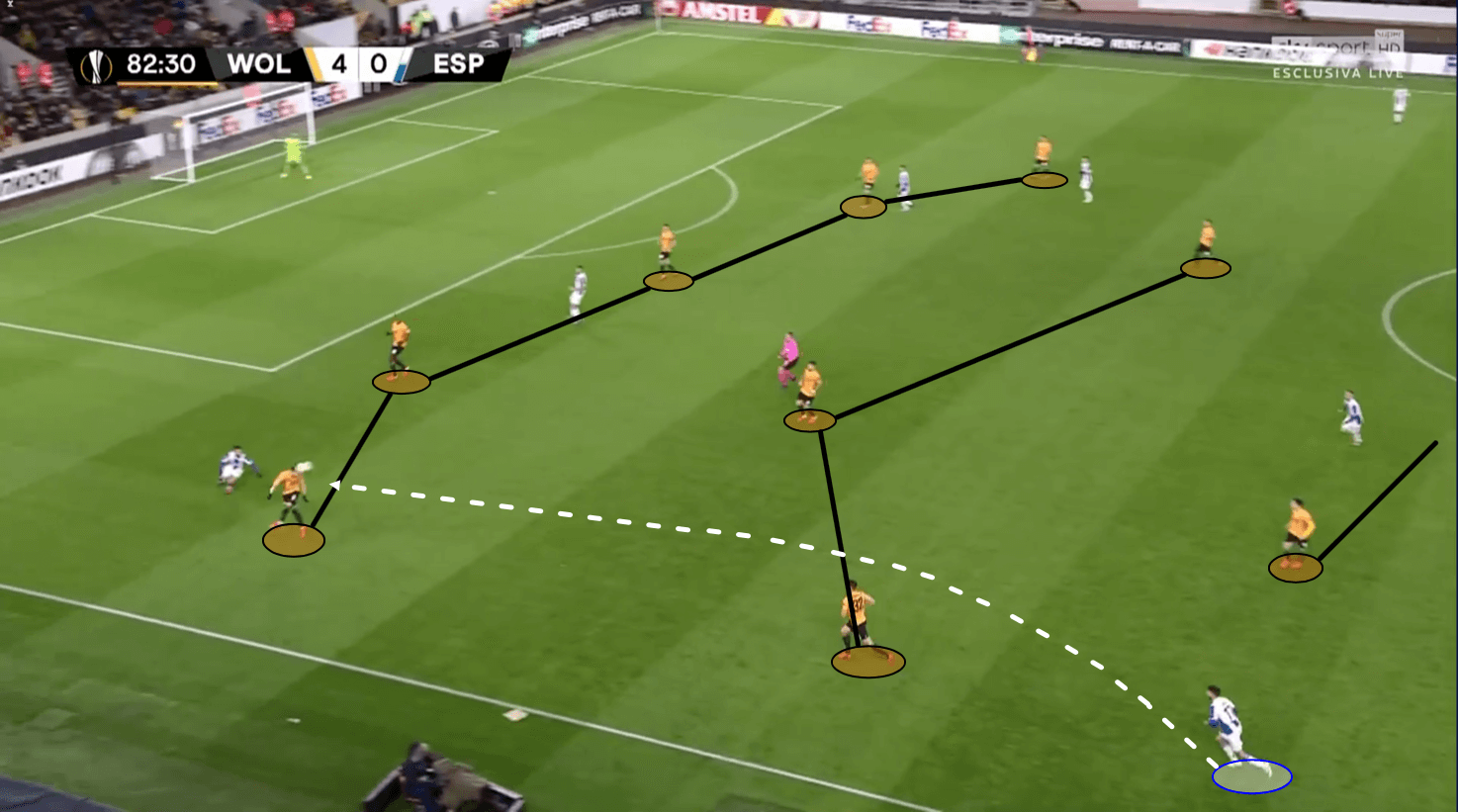 Here we can see Wolves in their 5-3-2 shape. Espanyol were hitting desperation long balls at this point, which Wolves’ back line were easily able to intercept.

In these defensive shapes, Wolves moved as a unit in shutting down potential passing lanes. 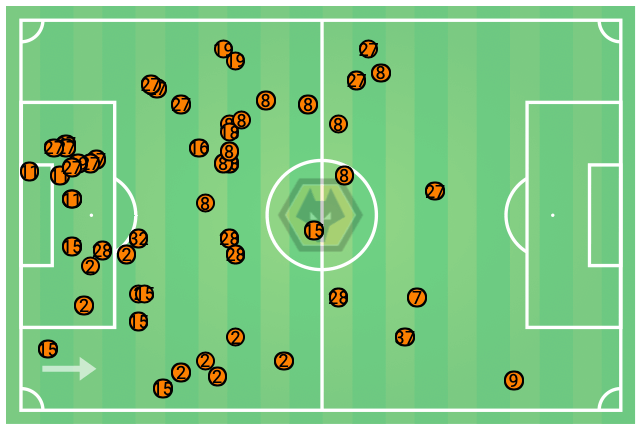 The graphic above shows Wolves’ 55 interceptions. 82% of these interceptions, including nine of Saïss’s team-high 12, were in the defensive half. The average amount of interceptions per 90 minutes by a team in the Premier League is 42.21, proving the aggressive approach Wolves’ took in attempting them this match.

Ultimately, analysis shows this match played out as expected. Wolves played to their strengths in allowing Espanyol space and therefore creating space for themselves, and Espanyol continued to struggle in creating quality opportunities in attack. The Premier League side will look to continue the success of their structured and rapid tactics when they host Norwich on Sunday. Espanyol meanwhile may very likely sacrifice their Europa League hopes in order to focus on escaping what would be the club’s first relegation in 27 years.