The expectations were very high for this match corresponding to La Liga’s 30th matchday. The second-placed team and a UEFA Champions League spot contender faced each other, with all eyes on Martin Odegaard who played against his parent club and was surely eager to impress to earn a position in Real Madrid‘s squad next season.

The match wasn’t as attractive as it promised and what was set up to be a thrilling match ended up being a duel between two slow teams who lacked ideas. For this reason, the referee decisions were the most interesting speaking topics after the game. However, in this tactical analysis, we will focus on how both teams played, how their tactics worked and the reasons behind their performances. 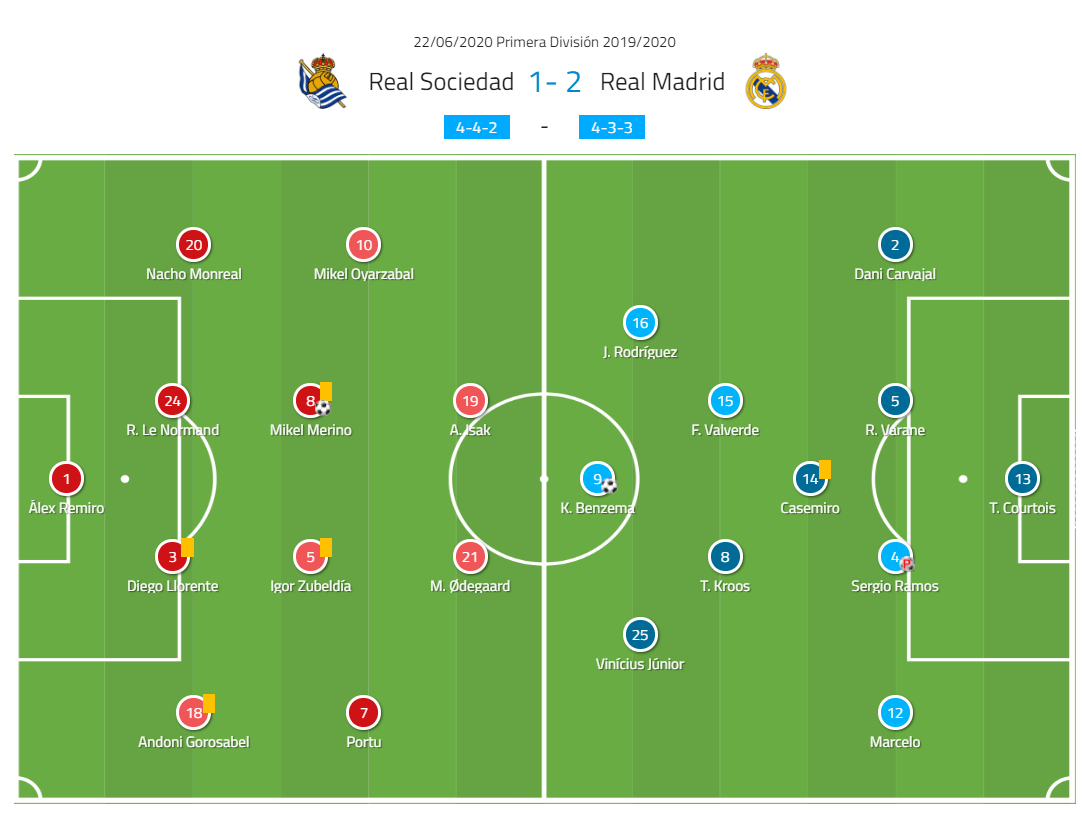 Real Sociedad used a 4-4-2 formation that looked like a 4-2-3-1 in practice as we will see in this analysis. Odegaard was free to move up and down, trying to progress the ball but also trying to receive near Isak and connect with the Swedish player, who replaced Willian José in the starting XI.

Other new additions in the home side’s starting XI were Gorosabel and Monreal in the full-back positions, Robin Le Normand partnering in defence with Diego Llorente, Mikel Merino playing alongside Zubeldía, and Portu for Januzaj, looking to exploit his working rate and pace.

Real Madrid used a 4-3-3 formation with three changes from their last game. Vinicius played in Hazard’s position, James Rodríguez returned to the starting XI to come inside from the right, and Marcelo appeared as the left-back instead of Mendy.

Valverde and James exchanged positions during the game, with the Colombian playmaker drifting inside and trying to connect the midfield with the forwards. Vinicius, on the other side, provided depth with his constant runs and dribbles and was Real Madrid’s most threatening player as we will see later in this tactical analysis.

Real Sociedad pressed high up the pitch and did it very well, forcing Madrid to play direct balls or just clear it away during almost the entire match. When Madrid tried to play from the back, the distance between defenders and attackers was too much, forcing the direct play we have mentioned. No one was moving behind Real Sociedad’s pressing line and there were no passing lanes the defenders could use to progress the ball cleanly from the back.

We can see an example of this in the picture below. The right centre-back, Raphael Varane, has the ball but there are no passing options behind Real Sociedad’s pressing players. The red area shows the space Real Madrid players are not occupying and where they should be to give passing options to the more defensive players. This made it easy for Real Sociedad to press and force long passes, where their centre-backs felt quite comfortable against Benzema, James, and Vinicius. 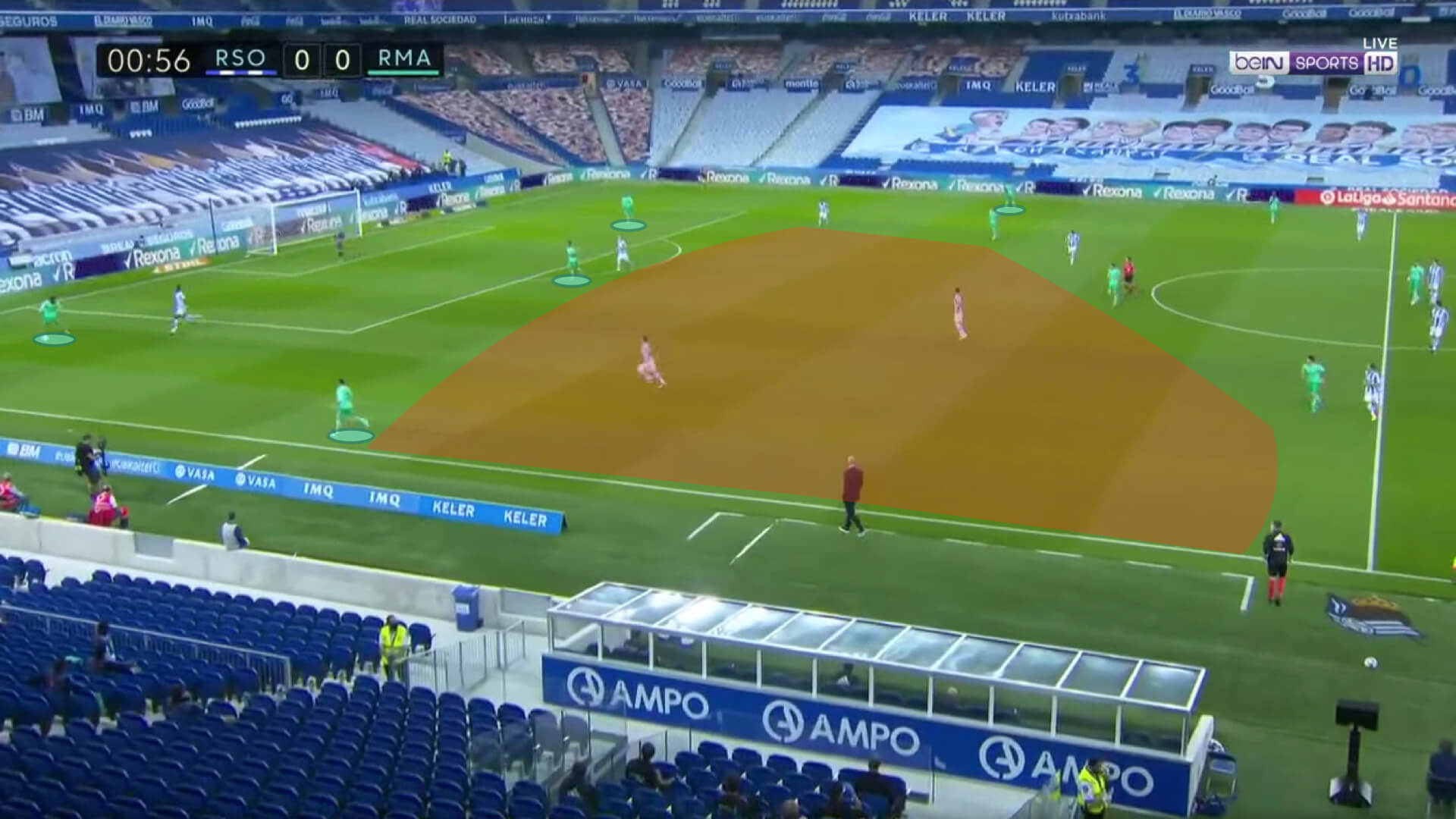 Zidane realised this was going to be a problem and tried to solve it using moving the full-backs to central positions during the build-up to create different passing options. It worked at some points but the distance between the players was still too big and Real Madrid, in general, struggled to play from the back.

The different roles of the full-backs in the build-up can be seen in the next two pictures in this analysis. In the first one, we see how both full-backs leave their positions on the wings and move inside to a position behind the pressing players’ backs. With this, the distance between players is smaller and there are also new passing lines available, both to the full-backs and to the wingers who try to support the ball possessor. 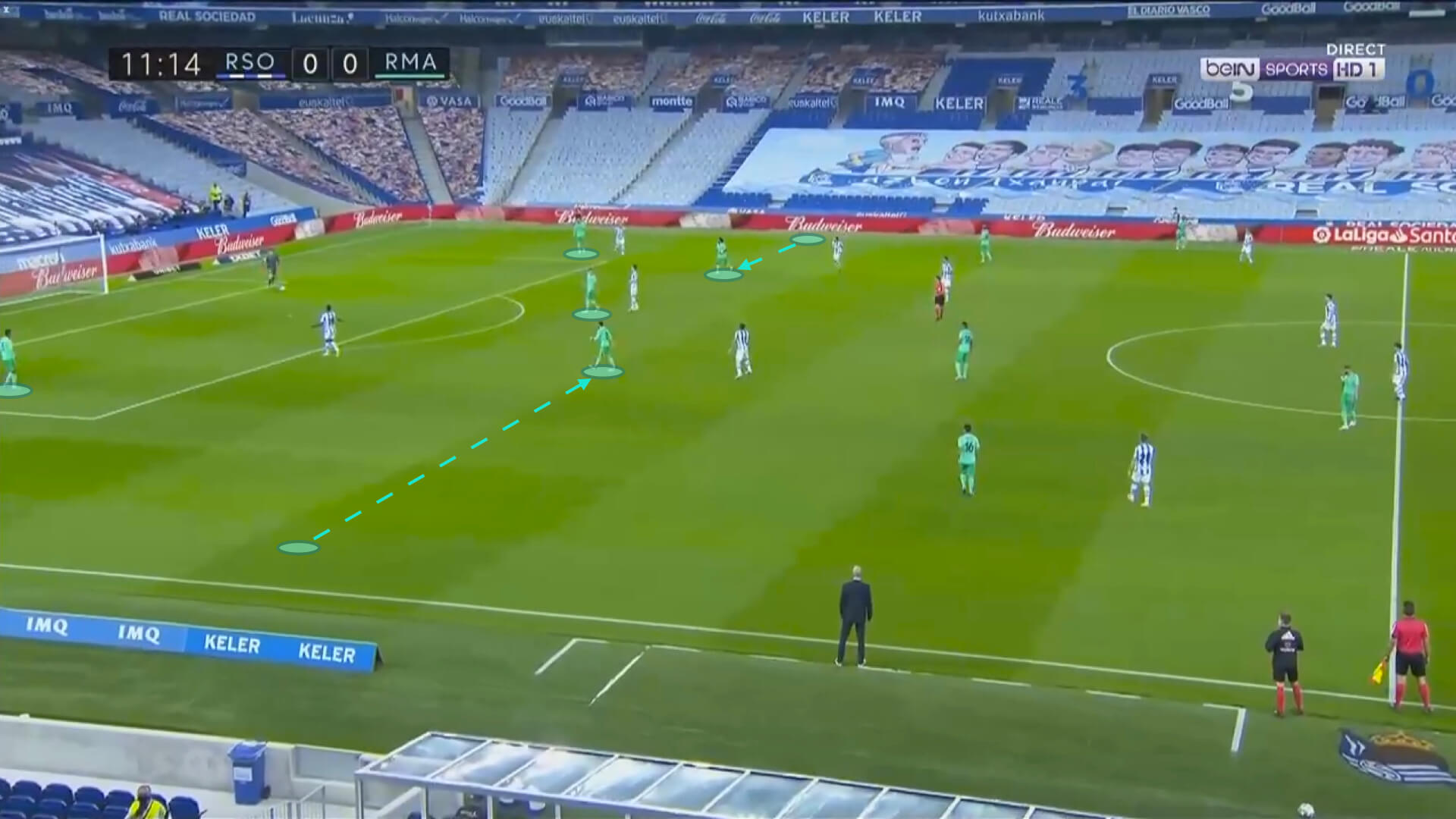 There’s another example in the picture below. Marcelo gets behind the pressing players and receives a ball from Varane with space to turn and initiate the attack. Marcelo made this kind of movements more often than Carvajal for two reasons. First, his technical ability is higher than Carvajal’s. Second, he looked to attract the attention of Real Sociedad’s right wing players to generate spaces for Vinicius to run and dribble. 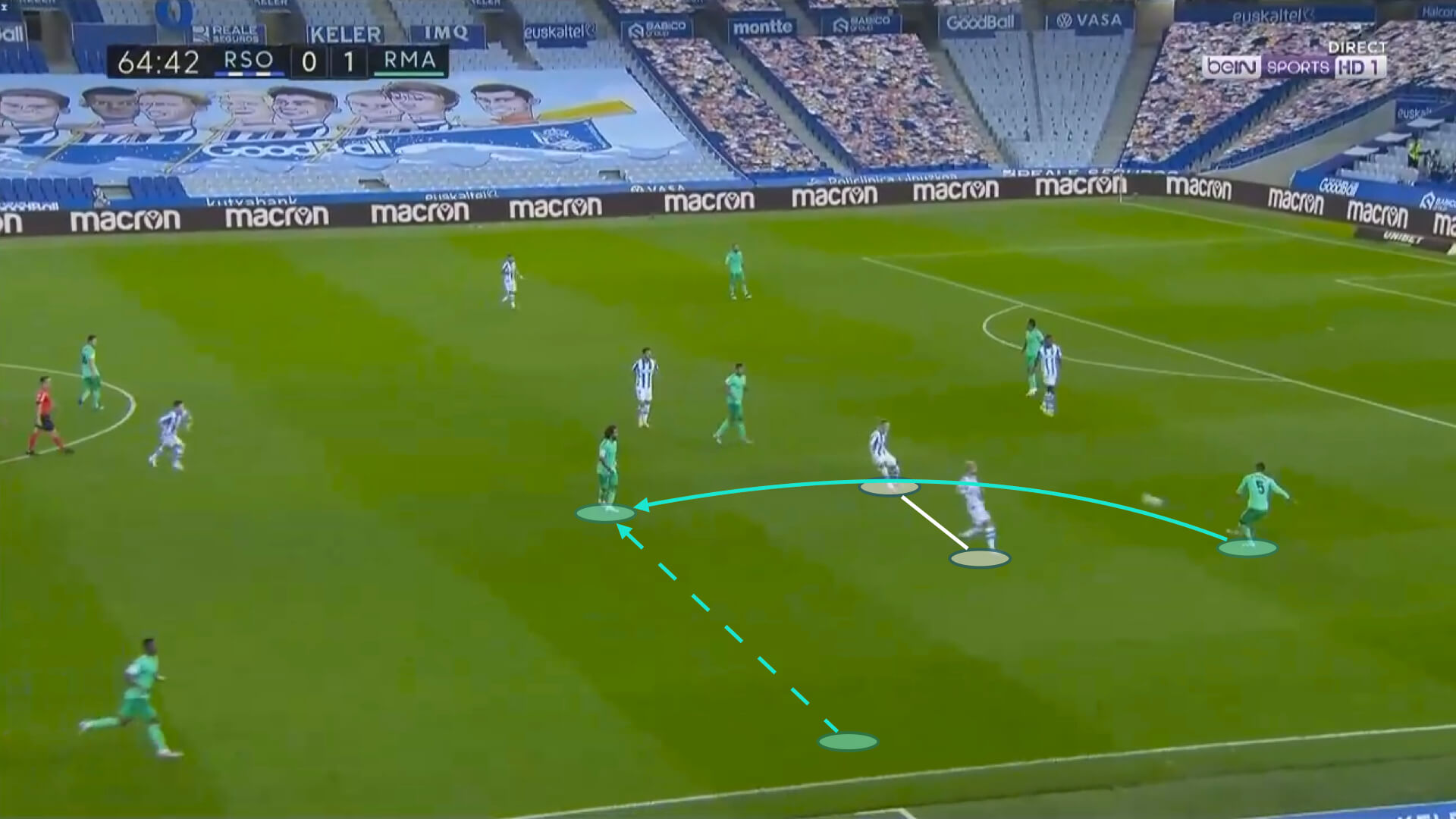 The few times Real Madrid managed to build up from the back, they lacked some creative presence in the central zones. Kroos sat very deep and dictated from behind and Valverde isn’t a creative player, even if his runs with and without the ball can create danger. Benzema tried to fill this gap and James left the right wing to appear in central zones and try to create from there, exchanging positions with Valverde.

Real Madrid’s main threat was Vinicius on the left wing. The Brazilian wonderkid used his pace to get in behind the defensive line and receive long passes from his teammate taking advantage of Real Sociedad’s high defensive line. Real Madrid also tried to attract players before passing the ball to Vinicius so he could try to dribble in one-vs-one situations. Marcelo played very close to Kroos, the left central midfielder, and Vinicius had a lot of chances to try his dribbling skills and pace against Gorosabel.

Let’s see a couple of examples of how Vinicius affected the game. Below, we see Courtois under pressure and he decides to play a long ball into Vinicius’ run in behind. Real Sociedad’s high defensive line left a lot of space for the Brazilian to exploit using his pace. 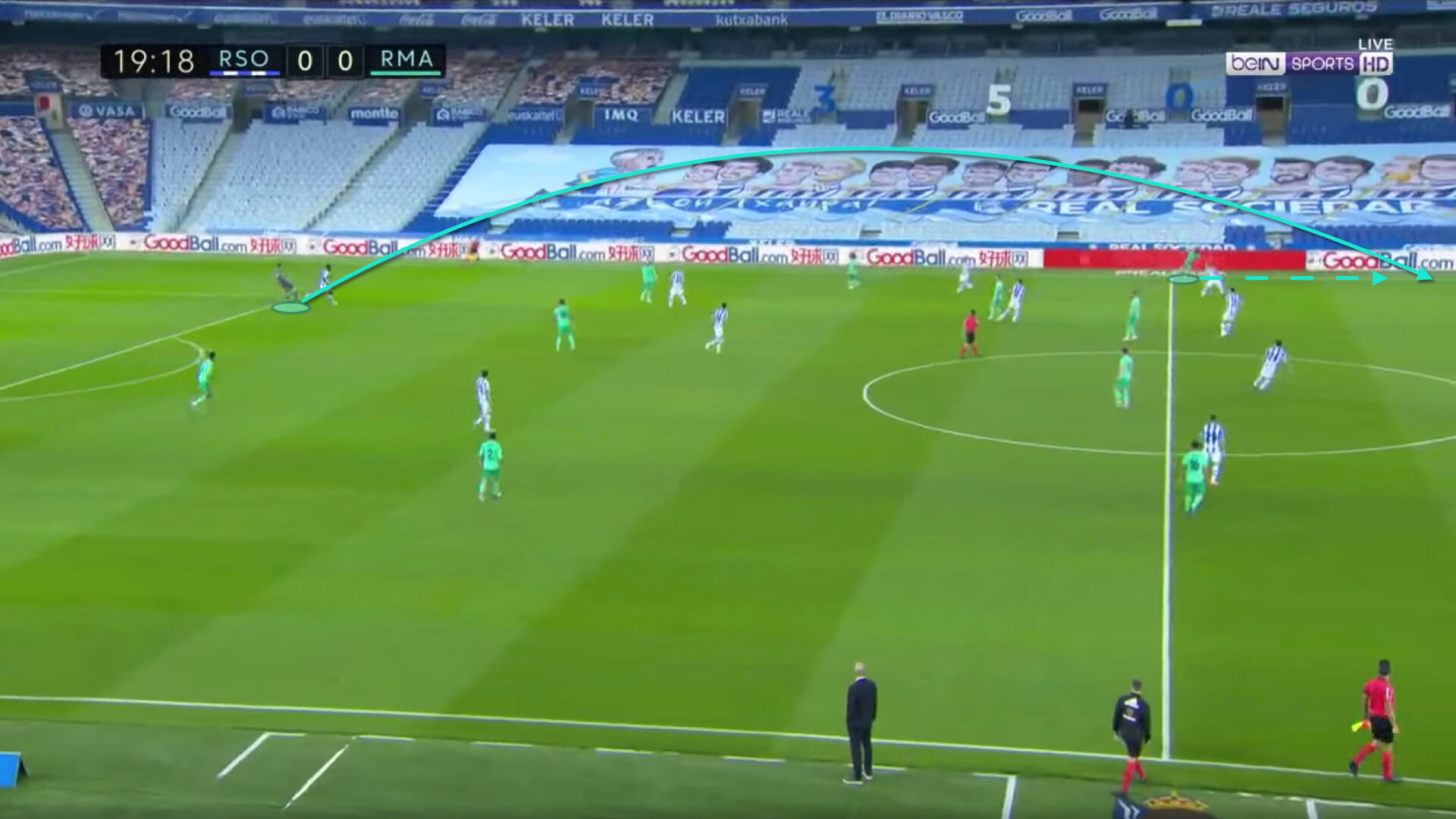 Again below, Vinicius passes the ball to Marcelo and starts a run with an explosive change of pace. Marcelo uses his technical ability to play a perfect through pass and Vinicius is fouled inside the box after dribbling one player, leading to Real Madrid’s first goal. We see how Kroos, Marcelo, Casemiro, and even Benzema overload the left flank to attract Real Sociedad players and leave Vinicius in a one-vs-one situation against Gorosabel, who ends up committing the penalty. 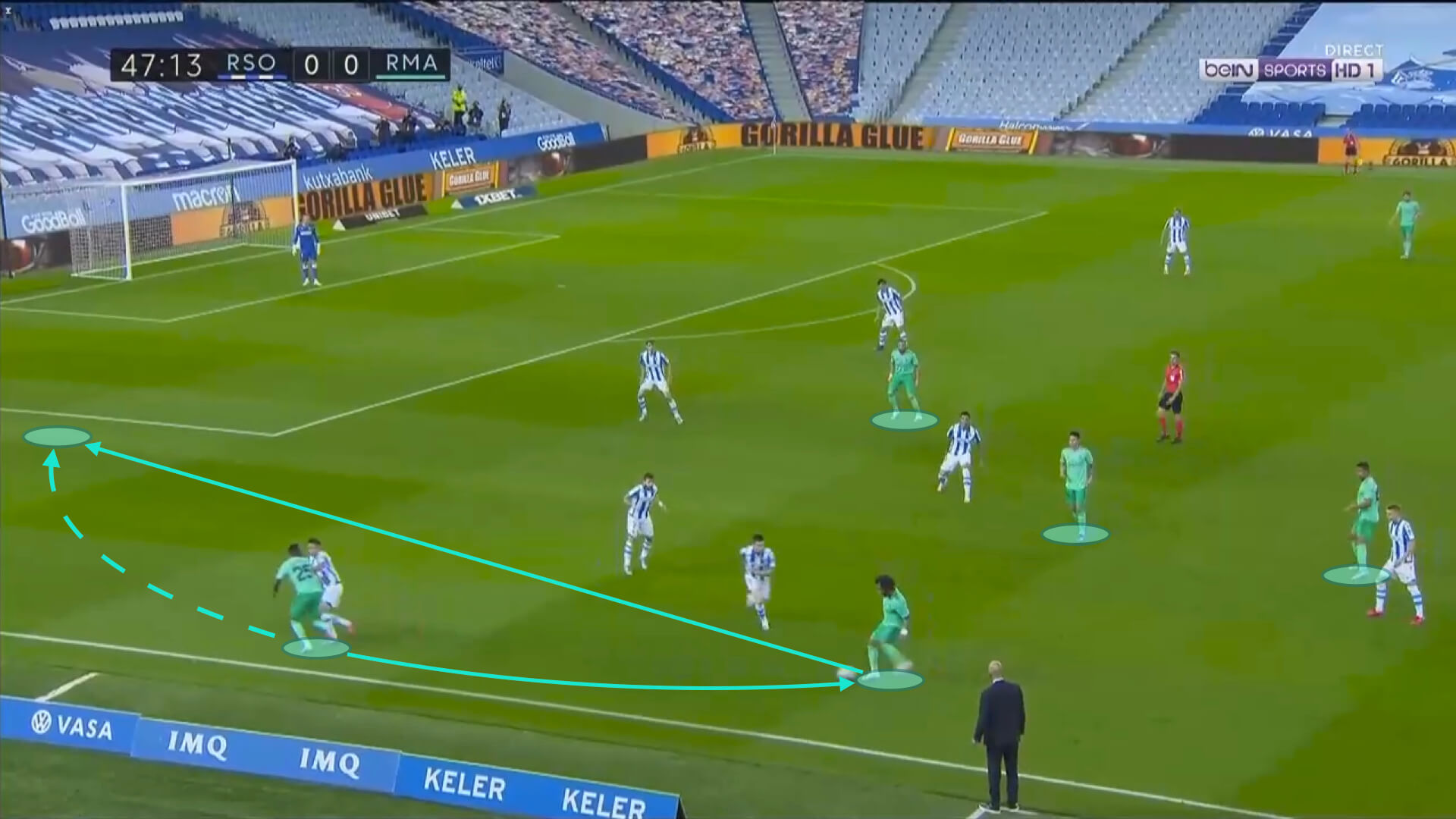 Vinicius was the most important player of the match and generated almost everything Real Madrid created. His stats speak for themselves. The Brazilian winger attempted and completed more dribbles (12/5), got involved and won more duels (26/13) and touched the ball inside the box (6 times), more than any other players in the match. Besides, he created 0.46 xG and won a penalty, completing a man of the match performance.

The only problem with Vinicius in this match was his interaction with the team at some points. His pace and directness make him go forward all the time, and sometimes this is not what his team demands. Sometimes he should hold the ball and let his team advance and establish in the opposition third because if he always goes forward his teammates can’t follow him every time and he ends up being isolated in some plays.

When playing out from the back, Zubeldía got near or between the centre-backs and Merino and Odegaard alternated their positions to support him behind the first pressing line or between Real Madrid’s midfield and defensive lines. It was usually Merino who was there to offer a passing lane behind the pressing line, but both of them contributed to this aspect. The rest of the players occupied the space well, with the full-backs offering width and the forwards trying to create passing lanes.

We see this disposition in the picture below. Le Normand, the left centre-back, has the ball and his teammates’ positioning create a wide range of progressive passing lanes. Depending on how much he’s willing to risk and the movements of the Real Madrid players, Le Normand could pick any of those passes. 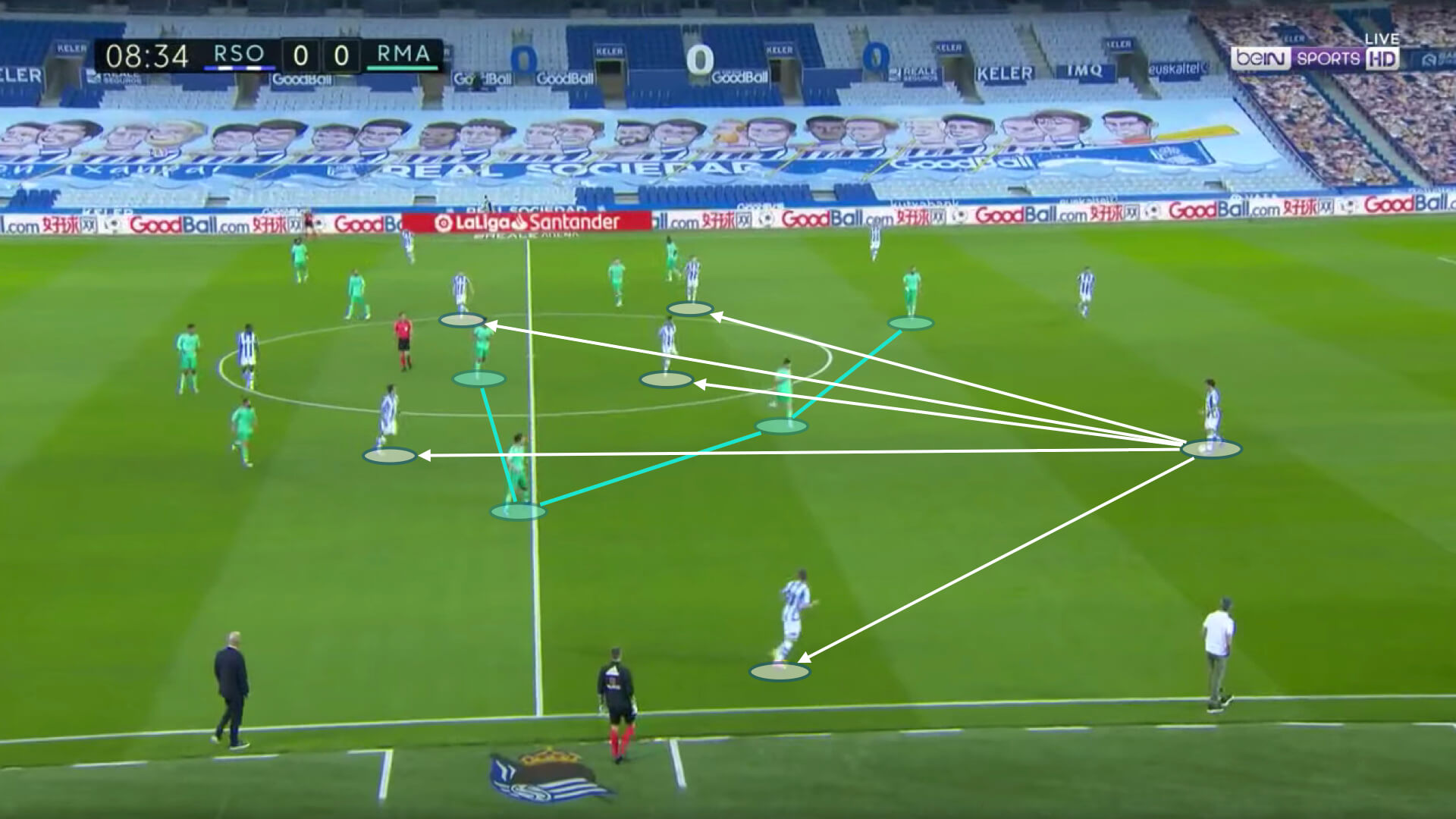 Real Sociedad generally progressed well from the back and reached the final third very often, completing 47 passes to the final third. Real Madrid’s low block made it easy for Real Sociedad to advance and receive in dangerous positions but once there, they lacked creativity and Real Madrid felt comfortable defending close to their goal. In fact, despite having the ball around the box a lot, Real Sociedad only managed to shoot five times from inside the box, generating just 0.45 xG and not having any chances of 0.10 xG or more.

We can see how well and easily Real Sociedad established themselves in the opposition half in the next examples. First below, Merino doesn’t face any pressure and finds Isak with an easy pass that leaves Real Madrid’s midfield behind. Isak plays a good layoff to Odegaard, but the Norwegian can’t create a chance despite the space he has. With passers like Merino and good receptors like Isak or Odegaard, Real Sociedad should have made much more of how deep Real Madrid’s defensive line was. 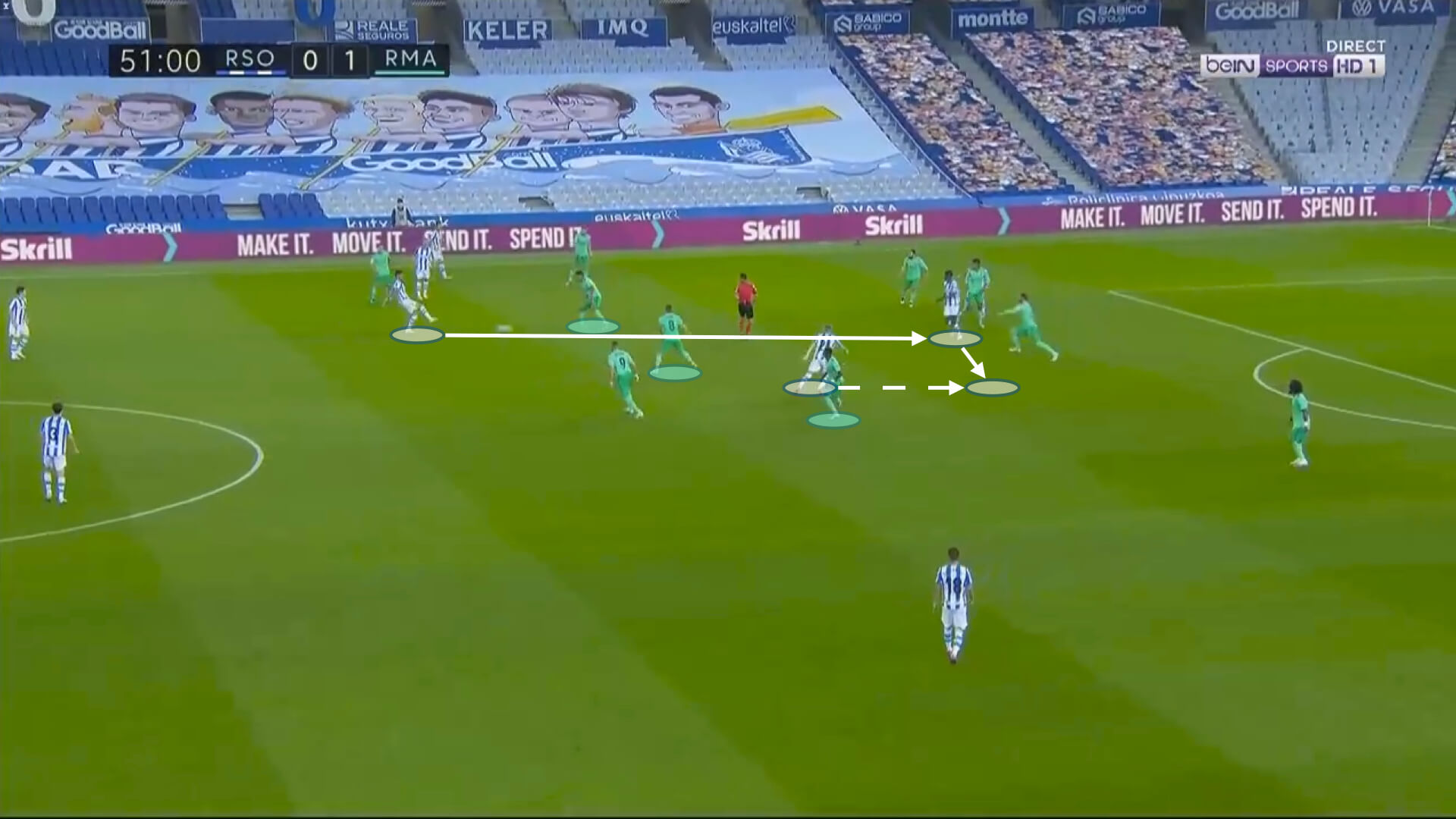 Again below, Merino carries the ball forward and when Kroos leaves the midfield line to press him, a huge space appears for Odegaard to receive an easy pass and attack the box. Once again, Odegaard wasn’t inspired and didn’t create anything. Oyarzabal didn’t do much either, and Portu worked very hard but couldn’t create a lot. 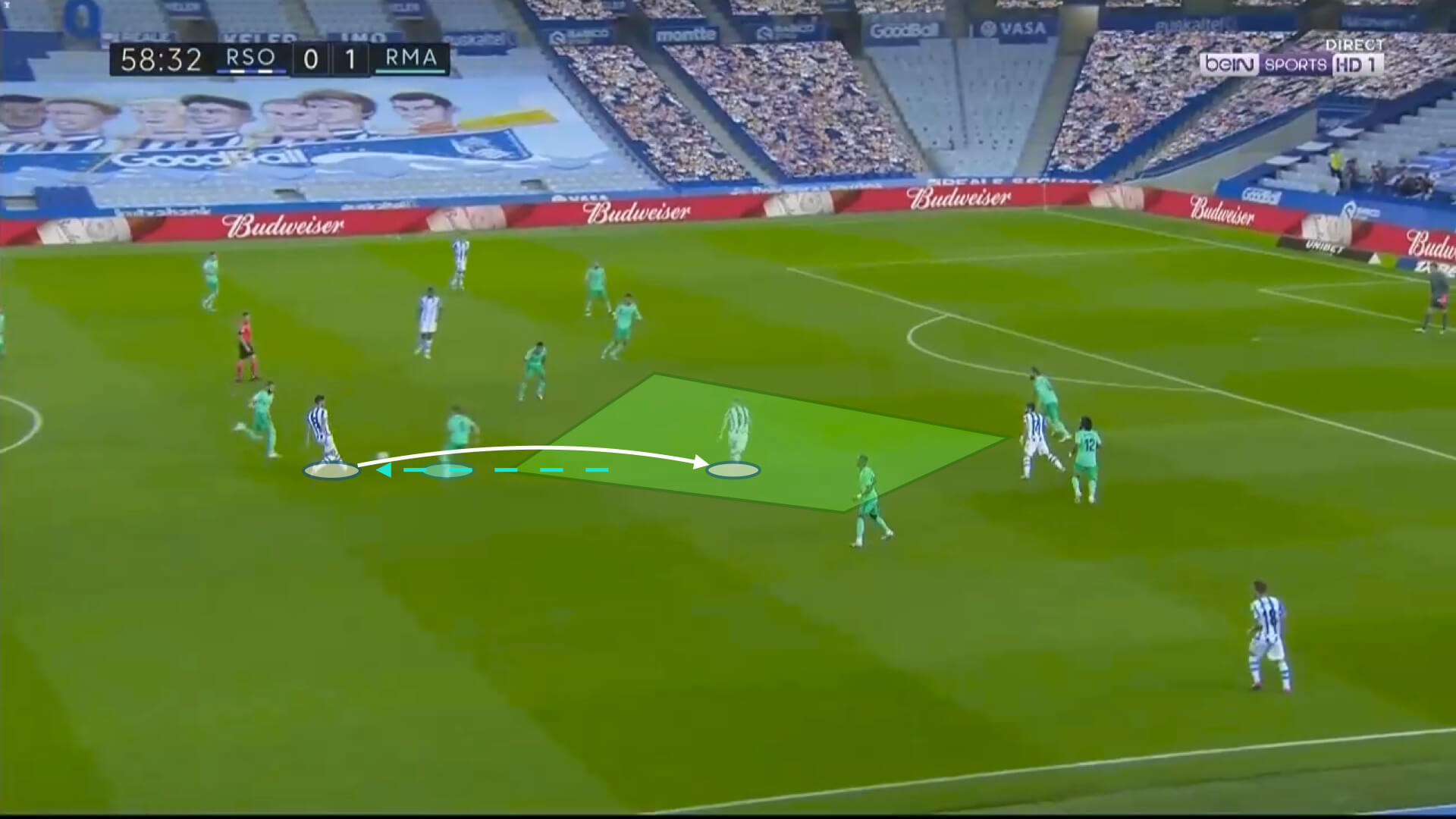 As an example of how low the production from Real Sociedad’s forwards let’s take a look at Januzaj’s stats, who only played 37 minutes, attempted more dribbles (5) and shots (2) than any other Real Sociedad players, while also being the player with the most deep-completions (2) and key passes (1) in the team too.

The match was expected to be a thrilling one, with the second-placed team in the league facing the most attractive team in the league. However, it was disappointing and neither of them played at the level everyone expected. None of them reached one expected non-penalty goal, and three controversial referee decisions were the difference in the end as Real Madrid reached the first position in La Liga after scoring from a strict penalty and after a possible Benzema handball, while the referee also disallowed a Real Sociedad goal because of a player supposedly blocking Courtois’ vision.

The best thing to take from this match is the performance of Vinicius. The Brazilian youngster was a constant threat and proved he can lead Real Madrid’s attack and generate a lot for his team, but there are still doubts about his end product and finishing ability.