In a top three clash in La Liga, Barcelona travelled to face Sevilla in a game which had plenty riding on it but would ultimately end in a 0-0 draw with few chances for either side as they cancelled each other out with neither willing to take risks.

The result would mean that Real Madrid could regain ground in the race for the La Liga title as they beat Real Sociedad at the other end of the country 48 hours later while Sevilla also dropped into fourth.

This tactical analysis will consider the tactics of Quique Setién’s Barcelona and Julen Lopetegui’s Sevilla. The analysis will explain how the two coaches did battle tactically, though neither was ready to gamble on getting the three points for their side. 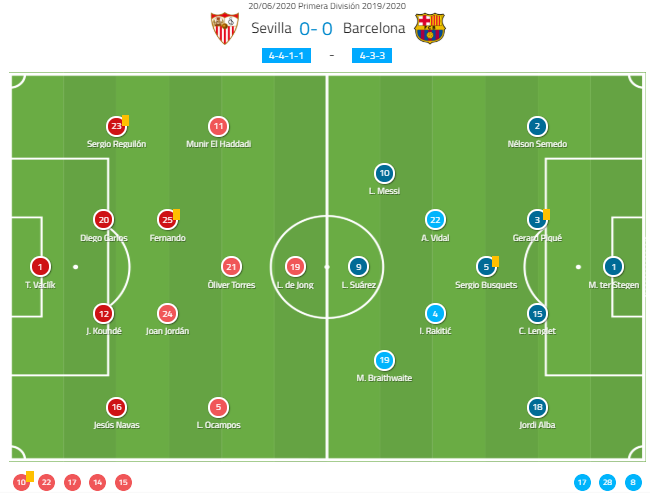 Lopetegui fielded his strongest available line-up in a 4-2-3-1 which would actuallly look more like a form of 5-4-1 for much of the tie. Fernando would drop into the backline regularly with Óliver Torres operating as the second central midfielder alongside Joan Jordán.

Setién’s biggest surprise in the line-up was his decision to select Martin Braithwaite ahead of Antoine Griezmann, who would come on as a late subsitute in a move that the coach claimed was intended to add pace in attack. Again, the coach would not use all of his changes up, having recently claimed that it damaged his team’s chances by disrupting their rhythm.

Barcelona’s attacking team selection once again surprised, this time with Braithwaite picked ahead of Griezmann, but the side still lacked width desperately when in possession. Ansu Fati has shown in his appearances this season that he, like Ousmane Dembélé, brings width and pace to Barcelona’s game which helps to stretch opposition defences. Particularly when teams sit deep as Sevilla did on this occasion, this provides a real opportunity to create space and open up opportunities, yet Setién instead opted to play centre-forward Braithwaite on the left and would turn to Griezmann as a substitute.

This meant that rather than stretching the game offensively, all of the width that Barcelona brought came from Jordi Alba on the left and Nelson Semedo on the right bombing forwards. Consquently, that led to fewer chances and when they did come, it was with the risk of leaving Barcelona’s two central defenders, Gerard Piqué and Clement Lenglet, alone in their defensive third. What’s more, it offered no way of pinning back the Sevilla wing-backs. This will be covered in more depth later on in this analysis as Sevilla perhaps didn’t risk gambling here, but with such a lack of wide presence, there was no option of pinning back Lopetegui’s offensive full-backs.

This made it frankly very easy for Sevilla to defend, particularly as they sat in a low block and could cram 11 players into a narrow set-up which would deny Barcelona the space to move around freely in central areas while they failed to take advantage and use the wide flanks. As such, of the 39 positional attacks, deemed to come from one specific channel on either flank or centrally, 30.8% came from central positions but accounted for 0% of the shots taken from these chances. The result was the lowest xG produced in LaLiga since Setién was appointed at 0.57 and no real clear-cut chances for the visitors in a game that they desperately needed to win.

Sevilla’s set-up was one which clearly had the aim of avoiding conceding, something which they do well. As was touched upon with Sevilla’s team selection, Fernando effectively dropped deep into a central back three, with Jules Koundé on the right and Diego Carlos in the middle. Jesús Navas and Sergio Reguilón would also stick to deeper positions while Lucas Ocampos and Munir El Haddadi would drop and operate as wide midfielders, rather than wingers or offensive forwards. That left an isolated Luuk de Jong to press high up the field alone. This low block encouraged Barcelona to retain position in low-danger areas.

However, it also restricted Sevilla’s attacking potential, particularly in the first half. With Navas and Reguilón positioned so deeply, they could not get forward in the same way without gambling and as such did so rarely. The result was that the team lacked their key tactic of width and getting crosses into the box, with Munir and Ocampos providing most of the crosses, unusually. It was reflected in the success of the approach too as the 13.4% cross completion rate was the lowest since Lopetegui was appointed last summer and some way below the 35% season average.

Instead, Sevilla looked most dangerous when operating on the counter. While they avoided taking risks, they did commit numbers when Barcelona looked vulnerable with one full-back and the three more offensive midfielders pushing on to support De Jong. Repeatedly, they outnumbered Barcelona after a quick turnover in possession.

Even then, only once this season have Sevilla recorded a lower xG than the 0.5 recorded on Friday evening, back when they visited the Estadio Santiago Bernabéu to play Real Madrid. A draw was not a disappointing result for Sevilla and it is easy to understand why Lopetegui did not take any risks,

However, Sevilla did open the game up and become more offensive following the introduction of Éver Banega. The central midfielder replaced Óliver at half-time and instantly impacted the game with his vision. Sitting deeper, Busquets could not track Banega as effectively as he had with Óliver and instead Setién was forced to make a change and bring on Arthur into midfield with the sole intention of picking up Banega having seen the impact he was having on the game for the first 15 minutes of the second half.

In total, he would rack up a 100% completion rate of passes into the penalty area and 89% for passes into the final third. Sitting in a deeper role than Óliver, he operated more as a playmaker rather than an offensive ball carrier, having seen how his team-mate had struggled in this regard. Lopetegui didn’t hesitate to change the situation, with Banega coming on to provide greater vision and he did so effectively by providing the link between midfield and attack that had been missing as Sevilla looked to transition from a deep defensive situation into an offensive move.

There was no better example of this rapid transition than this pass to Suso. Sevilla were trapped in their own half and Banega showed intelligence to step away from Arthur as he was disengaged with play at a throw-in, this allowed him to turn his man quickly and find himself with the time and space to play a 50 yard diagonal pass into Suso who could get at Semedo on the right of Barcelona’s defence, with De Jong able to dash into the open space in the middle. On this occasion, Suso was unable to capitalise, but Banega’s presence and this kind of passing certainy stretched the game into a more open affair.

A way to stop Messi from free-kicks?

Not so much a tactical point, but one which provides an interesting analysis for any coach or scout was how Sevilla set up to deny Messi opportunities from free-kicks using two additional players to make it even harder for the Argentine. Messi had two free-kicks from good positions but was denied on both occasions. Koundé was placed deep inside the six yard box and as soon as the shot was taken, he dropped deeper to head the ball clear and cover the opposite goalpost to where Tomáš Vaclík was positioned. Equally, Munir was laying behind the wall to prevent a low attempt on goal.

It is a measure which would have to be questioned long-term, though. By looking from another angle, it is clear that by having eight outfield players involved in directly defending a shot from the free-kick, six in a wall, one laying down and one close to the goal line, it leaves only two to mark. As can be seen here, Barcelona then have six players in the box, four of whom at least could easily find space and could be picked out to have a much clearer angle on goal and a much easier chance.

For other sides, it may be difficult to replicate this approach. Once identified, Barcelona will undoubtedly set-up alternative routines, even if it means not capitalising on Messi’s incredible free-kick conversion rate.

This game served to show an intriguing tactical battle between two of Spain’s best managers, both of whom have a very clear and well-recognisable philosophy. On this occasion, neither was brave enough to gamble, but there can be no doubt that it was Lopetegui who set up his team better and reacted more effectively to the scenarios brought up in the game. The introduction of Banega worked well to stretch the game when in possession and served to pin back Barcelona’s full-backs who were providing all of the width to their side.

Setién instead was lax in his approach and failed to offer an alternative. The decision to bring on Griezmann as an attacking option, failing to correct this need for width, showed yet another flaw in his game management. Equally, Riqui Puig was again thrown into the action without a clear role. The stark contrast when compared to Lopetegui’s planning and tactical clarity was what allowed Sevilla to grow into the game later on, despite the evident lack of quality when put side-by-side with the team who were leading La Liga.

Had Lopetegui been willing to take risks and introduce Banega from the start, Sevilla may have found a way through. They defended solidly and were well set-up to encourage Barcelona to play in deep, central positions which posed them little threat. Barcelona, on the other hand, again looked sluggish and lacked any form of inspiration in their movement. In conclusion, Lopetegui’s opening game plan worked well and he adapted excellently, but he could have gone for the throat of a Barcelona side which looked out of their depth in the tactical battle.