Even though Barcelona still have a number of different issues to resolve within their squad, Quique Setién has improved many aspects of their game, such as their build-up tactics, which you can find in our previous analysis on the site.

But if there’s still one thing they struggle with immensely then it’s breaching the deep block of the opposition. Since they are usually the team on the front foot who dominate possession, they often find themselves facing teams who sit behind the ball and simply ‘park the bus’.

And, so far, it has proved to be one of the more successful tactics against the La Liga giants. For that reason, this tactical analysis scout report will explain their struggle with deep blocks.

The root of the problem

Generally speaking, no teams love to face a low or a deep block. It’s annoying and quite difficult to breach and one mistake can often lead to your opposition scoring on the counter and then riding the pressure for the remainder of the game.

And while it takes a long time to drill breaching a low block into your team, something Setién hasn’t had the luxury of so far, and it requires the right personnel, there are some structural issues Barcelona are currently experiencing that may be in the way of progress.

Firstly, the positioning of their midfield is often suboptimal as their staggering line doesn’t provide the team with necessary depth, nor does it always occupy the right zones when attacking.

The second issue they have is lack of forward connections they often create in the final third, which is also a direct result of the positioning of their midfield. Moreover, this is also connected with their inability to exploit the wide areas and stretch the opposition horizontally, as opposed to doing it exclusively vertically.

Finally, a big issue is also the profile of the players Barcelona have in their ranks – their current forwards are similar in their movement and neither of the midfielders, bar one, offer enough to compensate for that deficiency.

Now, we’ll move to the tactical analysis and dissect these issues in more detail. Another disclaimer before we do, however – these issues haven’t been present in all of the games but have been apparent in the clashes in which Barcelona were largely struggling, indicating it might actually be an underlying structural problem of the team as of right now.

Inefficient positioning of the midfield line

Setién has largely managed to improve Barcelona’s first phase of attack, helping them deal with intense pressing much better than Ernesto Valverde before him. But this has also resulted in teams often defaulting into a mid or deep block immediately rather than even trying to play expansive football against them.

And games against Napoli and Valencia, both of which were away from home, were prime examples of the aforementioned issues. Gennaro Gattuso’s men opted against pressing Barcelona and were behind the ball almost throughout the 90 minutes.

But the away team found it extremely difficult to dismantle the deep block largely because of their midfield line not offering enough depth between the lines. They would often position themselves in front of Napoli’s second line of defence, putting five or six players around the middle of the pitch.

Needless to say, this hugely affected their ability to find their players in dangerous zones on the pitch. As you can see from the graphic below, that kind of a setup does stretch the opposition vertically but does nothing to stretch them horizontally. 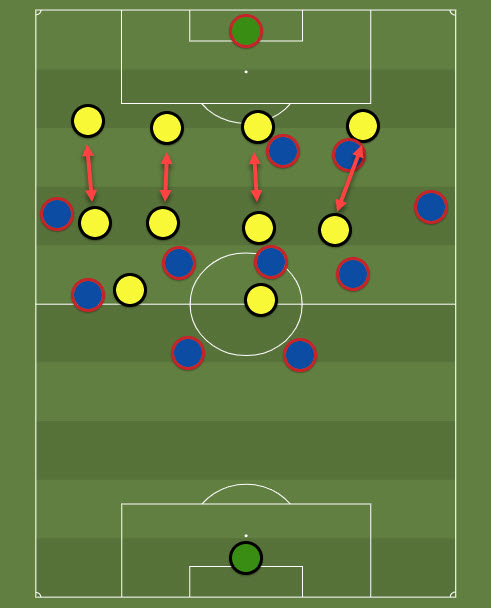 As a result, the defending team can stay narrow and cut off all and any passing lanes towards Barcelona’s forwards. Let’s take a look at some in-game examples. Against Napoli, in the image below, notice the positioning of Barcelona’s three midfielders and the chunk of space it creates in between the lines.

Even though they’re aiming to stager their line, it’s not efficient because all three of them are essentially in front of Napoli’s second bank of four. This means Barcelona have no way of progressing the ball between the lines and the direct result of that is a long possession spell without a concrete result.

A fairly similar situation occurred against Valencia at the Mestalla. Barcelona’s positioning was far from optimal and it resulted in endless possession recycling with no chance of advancing it into the danger zones.

Once again it’s a 4-4-2 block that somehow completely nullifies their approach since all three midfielders are in front of the second line of defence, this time not even in a staggered line to disrupt the opposition’s shape.

Another clear result of that is the fact that there’s no one to occupy the central areas higher up the pitch and this brings us to the second point of this tactical analysis, which is the movement of the forwards and the inability to create enough links in the forward line.

Lack of links in the forward line

The second section of this tactical analysis will just build on the previous issues we’ve already highlighted. With Barcelona’s midfield often being static and inadequately positioned, the forward line suffers greatly as well.

First of all, it makes the opposition’s job of isolating and marking the striker(s) out of the game much easier than it should be and the profile of Barcelona’s forward makes it an even tougher job for them to successfully avoid this.

Notice in the example below how Antoine Griezmann is often left all alone, surrounded by the sea of opposition players. Even if he somehow receives the ball, which is almost impossible at this stage, he doesn’t really have anywhere to go with it. 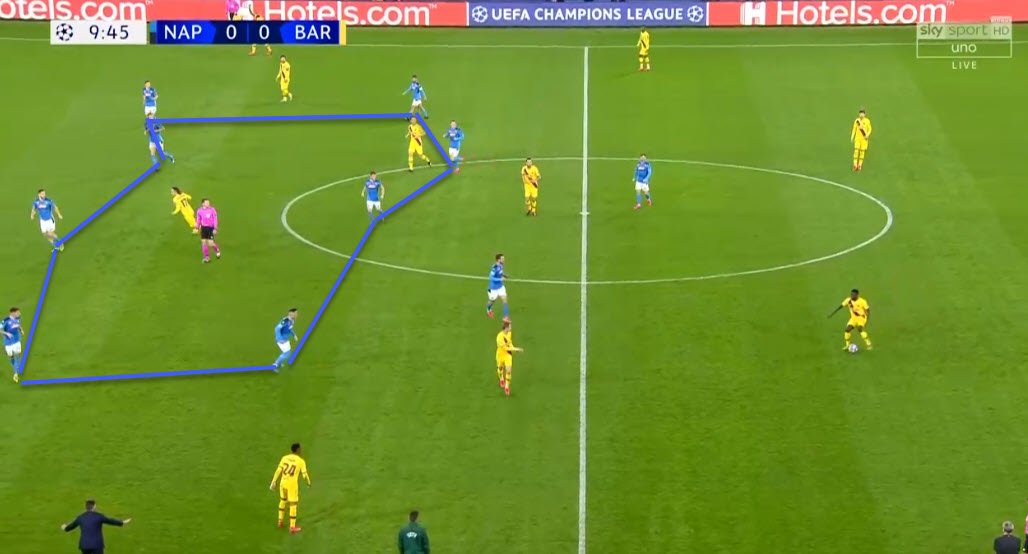 The Catalans simply don’t have enough forward connections to successfully create danger in the final third. And while the positioning of the midfield players does play a significant role in this system, the tendency of the forwards to either drift wide or drop deeper is also a problem in this instance.

Notice below how Griezmann, in his inability to receive a pass from the middle third, decides to drop deeper to get the ball. In that case, Lionel Messi would often move in the opposite direction, occupying the space between the lines.

But this doesn’t really solve the problem at all since the issue persists – lots of space between the lines but no one to occupy it bar one or two players at most. 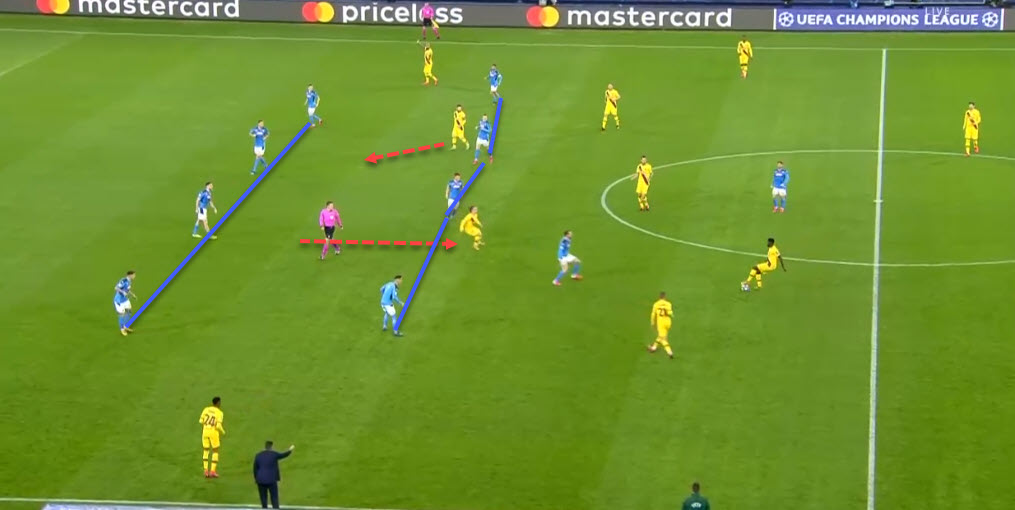 Setién would try to combat this by altering his tactics and personnel slightly, often throwing Arturo Vidal in the mix or instructing Frenkie de Jong to stay higher in an attempt to put bodies up front.

You can actually see how that was tried against Napoli with the Chilean occupying a position higher up the pitch after Griezmann decided to drift out wide to combine with Junior Firpo.

But once again, the problem remains unsolved due to the sheer numerical inferiority Barcelona face in the final third and the lack of any connections make it almost impossible to penetrate the block.

Instead of using the forwards to pin or drag the opposition’s defensive line out of their shape, Barcelona never have a focal point up front and no willing runners to exploit any potential passes that might bypass the defensive block.

This brings us to the third and final part of this tactical analysis.

Lack of movement and exploitation of the wide areas

At the moment, there is no stat that measures the tendency of players to run behind the opposition’s defensive line but Barcelona have a serious problem of being far too static in attack.

This makes their approach predictable and it makes the low and mid-blocks that much more effective against them. Generally, when you put up a low-block against someone, it forces them out wide and clogs up the central area.

That sort of approach prioritises the defence of the zone 14 while it allows the opponent domination of the flanks. It’s very much the same for Barcelona who are a team who largely don’t know how to use that to their advantage.

Part of the issue is the lack of real wingers in the team and also the lack of quality in the full-back areas. That, however, is a board problem and part of a bigger picture at the club. But it’s also a structural issue that is closely connected to the previous two problems.

Since Barcelona don’t create enough forward connections, their ability to create in the final third and especially in the wider areas, is significantly decreased. Notice an example below as Barcelona try to penetrate Valencia’s backline through the right flank. 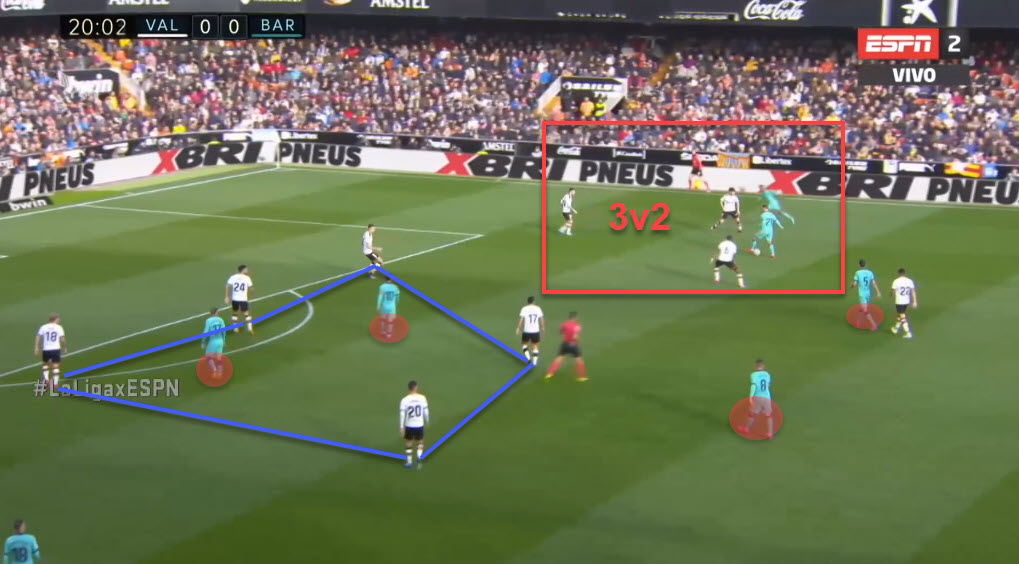 But this overlap is predictable and easily countered with good positioning and a numerical advantage right from the bat. Once again, the forwards are easily isolated and boxed in, the midfield line stays too deep and there’s no support for the attack.

And since there are not many connections to make once Barcelona enter the final third, they have drop their forwards to fight the huge numerical inferiority that is created out wide, as you can see below with Griezmann joining Jordi Alba on the left flank. 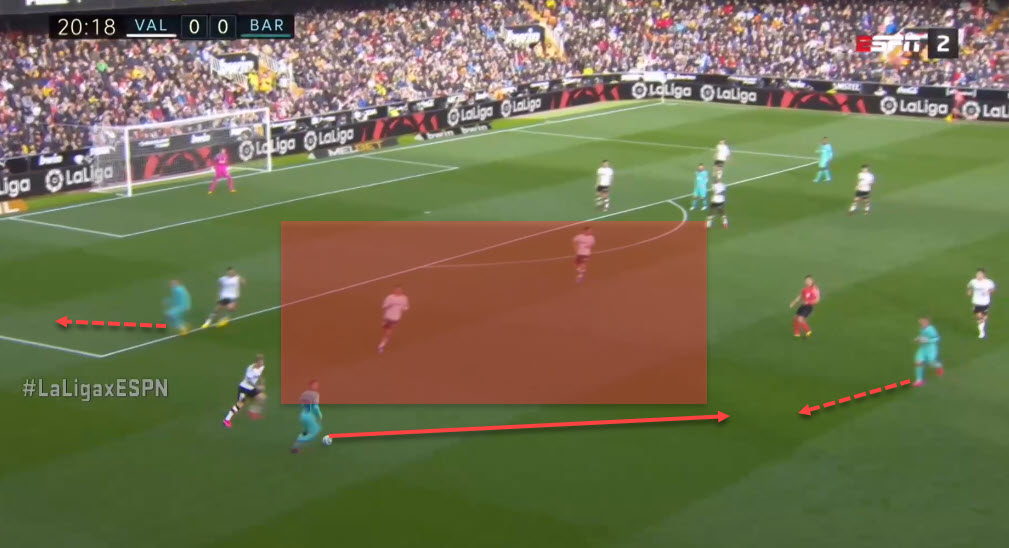 Since there is basically no support and no depth added into the attack, Barcelona have no options other than either sending the ball to the lone player making the run – which is, once again, easily countered – or recycling possession and sending it backwards.

Notice in both examples how the space between the lines is once again poorly exploited – in the first example, the forward line is boxed in and in the second, there’s no one even occupying those areas.

Setién is slowly but surely improving Barcelona but this is a process that takes a lot of time and resources invested in the right areas. Unlocking a deep block is a fine art not many have mastered and it’s definitely something no one does with ease – not even the likes of Liverpool and Manchester City.

But Barcelona are experiencing some structural issues in their tactics as their exploitation of the space between the lines is subpar and this leads to a number of other problems such as the isolation and lack of connections in the forward line and the inability to successfully exploit the wide areas.

Add into the equation that they don’t really have the right profile of players to plug those holes and suddenly, the issues become that much bigger. It will be interesting to see how Setién deals with it.