It has been a couple of months since Quique Setién has taken over Ernesto Valverde as the coach of Barcelona. Even though the Catalans are still struggling to get back to their brilliant best, there have been some big changes in their tactics and the general approach of the team, especially in the build-up scheme.

Setién has changed and for the most part improved their build-up patterns, increasing efficiency and adding more tools to their overall arsenal. This tactical analysis will be a scout report on Barcelona’s build-up schemes and will give you an analysis of the team’s tactics when building their attacks.

The goalkeeper as an outfield player

A large part of this tactical analysis scout report will indeed revolve around Marc-André ter Stegen and his ability to be fully utilised as an outfield player rather than just clearing the ball through goal-kicks or throws following a failed attack by the opposition.

Two things have to be noted right from the beginning, however. Firstly, Barcelona’s tendency to build-up from the back is nothing particularly new as this has been their signature move for years now. Setién has only tweaked this so that it is done in a more efficient way that suits his tactics better.

Secondly, using the goalkeeper in the build-up scheme is also something we often connect with Barcelona’s tactics but this tactical analysis scout report will outline the difference in that approach since Setién’s arrival at the club.

Below, you can see a graphic representation of Ter Stegen’s various types of passes since the beginning of 2019/20 season until the final game that was played in La Liga. The vertical red line represents the end of Valverde’s and the beginning of Setién’s tenure.

You can see a clear spike in all of the types of passes as Ter Stegen has been involved more than ever and has even been used as a direct link between the defensive and the forward line. This is a clear feature that was not present in Valverde’s tactics and even though he would play a part in the construction of their attacking tactics, he was never such a focal point.

The main difference between Ter Stegen now and Ter Stegen under Valverde is indeed in his tendency to be used as an outfield player – a centre-back if you will. This is done by simply allowing the goalie to move forward with the ball and position himself in-between his two centre-backs, allowing Barcelona to easily maintain a numerical advantage over the opposition.

Notice below how the Catalans effectively have a 9v8 situation in their own half because they use their goalkeeper as an outfield player. The two opposition players that were pressing their backline have to spread to cover the centre-backs but that leaves Ter Stegen free to move up and play the ball right into the path of Sergio Busquets. 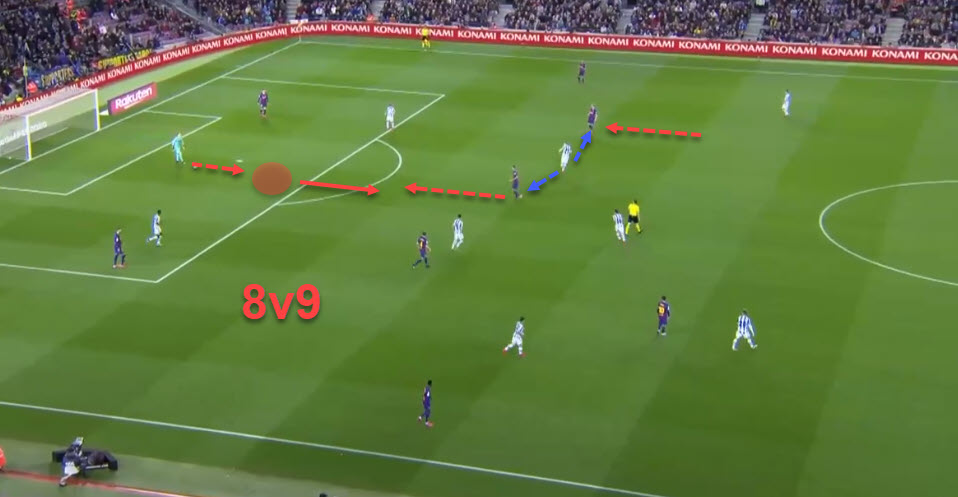 Notice how Real Sociedad were aiming to match Barcelona’s outfield numbers but with Ter Stegen stepping up, they suddenly have an extra man to worry about. As their formation shifts and they try to plug the holes, more of them appear.

Busquets turns and plays a quick one-two with former Ajax player Frenkie de Jong before receiving the ball and sending it to Lionel Messi who is now being followed by just one player instead of the initial two, as a result of their numerical superiority.

But the main thing that the goalie’s stepping up usually does is invite pressure and free up his centre-backs to receive the ball. In normal circumstances, one of the centre-backs would start the build-up out wide and would be more susceptible to collapses by the opposition.

By allowing the goalkeeper to step up with the ball, it makes the opposing players leave their man unmarked in an attempt to try and force the ball-carrier into mistakes. That, however, is key for Barcelona’s progression of the ball in the first phase of attack.

Once the goalkeeper steps up and invites pressure, he will find one of the dropping midfielders who can then lay the ball off to the side which now has a free man thanks to the pressing squad turning their attention to the goalkeeper, as can be seen below.

Gerard Piqué is completely unmarked and can progress the ball forward as soon as it’s laid off by Busquets. If the opposition tries to man-mark the dropping pivot or double down on him, Barcelona will regularly drop another midfielder to assist the build-up play and offer a new channel to advance the ball.

The principle is very much the same in that instance and can be seen in the following example. Here, Ter Stegen receives the ball much deeper and is immediately collapsed upon before he can move with the ball forward. And since sending the ball to Busquets would be risky, he sends it to Ivan Rakitić instead and the Croat immediately lays it off to his teammate out wide and the progression continues as planned. 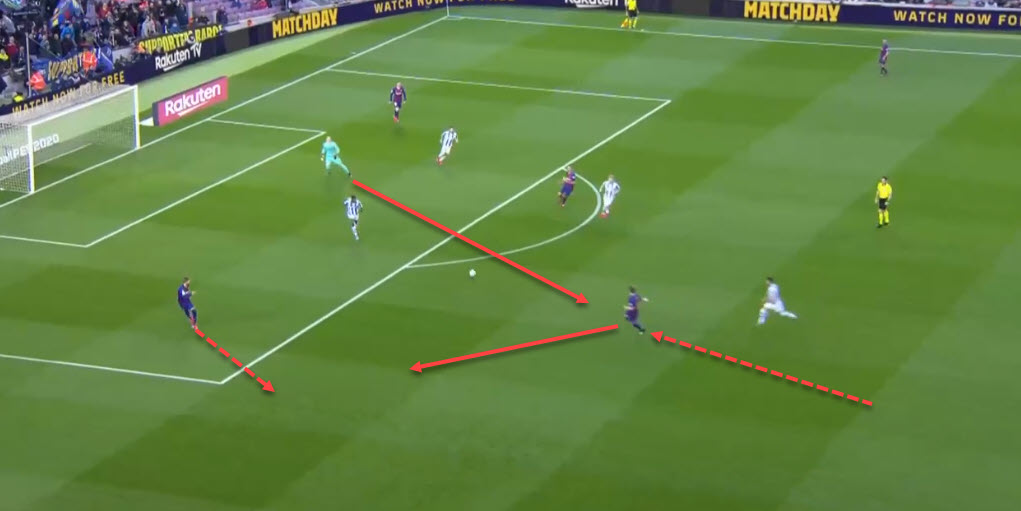 Of course, the build-up tactics we’ve mentioned in the first part of this tactical analysis scout report are not the only change we’ve seen under Setién. Another less common feature Barcelona have been using when necessary was the way they take their goal-kicks.

Primarily, that is the job of Ter Stegen but Setién instructs his centre-backs to do it instead in certain situations. So what exactly can he gain from a centre-back taking the goal-kick instead of his goalie?

Whenever the goalkeeper takes the goal-kick short to start the build-up from the back, in most cases he is forced to send the ball out wide to one of his defenders. This is usually a common press trigger for the opposition who converge on the new ball-carrier near the sidelines where it’s much easier to collapse and force mistakes.

But by starting the play from wider areas and moving centrally, it leaves the goalie with more freedom and with no immediate pressure since the usual marking setup will position their players wide to cover the centre-backs. It also forces the opposition to press at an angle instead of just going straight out wide where it’s easier to press.

And then, Barcelona can manipulate that reaction and start their attack with a similar approach we’ve outlined in the first part of this tactical analysis scout report. Ter Stegen steps forward and invites the press but since the opposition have to face him at an angle, they give him a window to deploy a pass into the midfield. 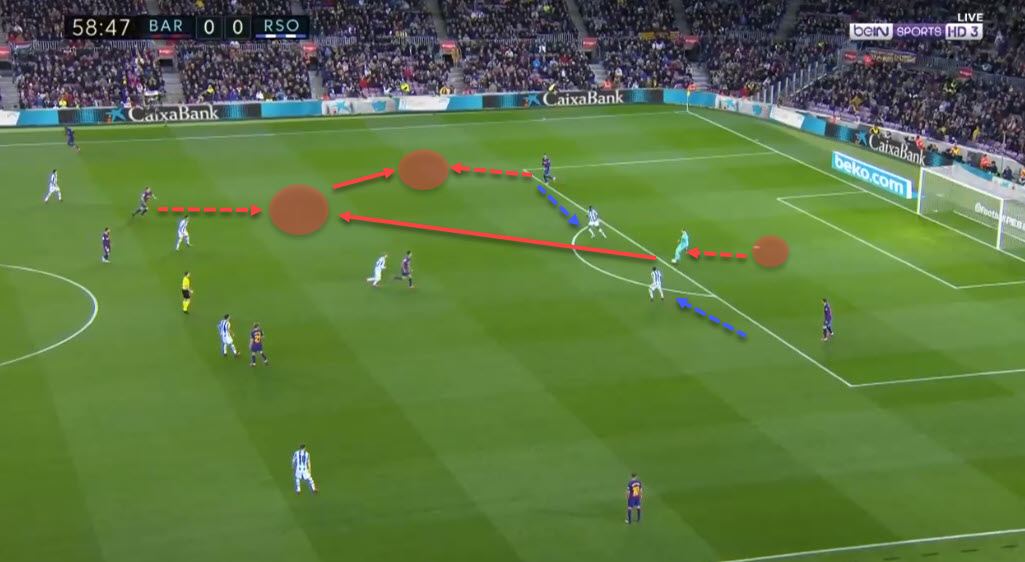 You can see how that makes it much more difficult to successfully collapse on the ball-carrier but it also opens up the flanks so that Barcelona can lay the ball out wide and continue their build-up practically unopposed.

But this has a different use as well – since Ter Stegen is skilled with his feet and this approach guarantees him more space and time on the ball, he can hoof the ball long in an attempt to find runners and unmarked players in pockets of space, similarly to the image below.

The role of the centre-backs

The final aspect we’re going to analyse in this tactical analysis scout report is the use of the centre-backs. Naturally, when looking at the first phase of Barcelona’s attacking tactics, it doesn’t come as a surprise to see their defensive line in the spotlight, especially since they are a team that is exclusively building their attacks from the back.

The use of the centre-backs in those tactics is, once again, nothing revolutionary by Setién but it has to be noted that they have, much like Ter Stegen himself, been far more aggressive and proactive on the ball ever since the new coach’s arrival at the club.

A fairly common strategy used in their build-up is to utilise both centre-backs’ ability on the ball and push them higher up the pitch so they can find their forwards with vertical passes. But what’s the difference between them deploying those passes and having the midfielders do it? Wouldn’t the latter option be simpler?

In essence – yes. However, as we’ve seen before, sometimes the midfielders will be heavily man-marked or boxed in when entering the middle third, making them an unlikely source of ball progression.

But Barcelona often move past that by dropping one of the midfielders, usually Busquets, as deep as the centre-backs, often even dragging one of the markers with him and pushing the other centre-back wider and higher up the pitch. By doing this switch, it opens up space and allows the said centre-back to receive the ball unmarked and with space to run into or with an open channel through which to send a pass. 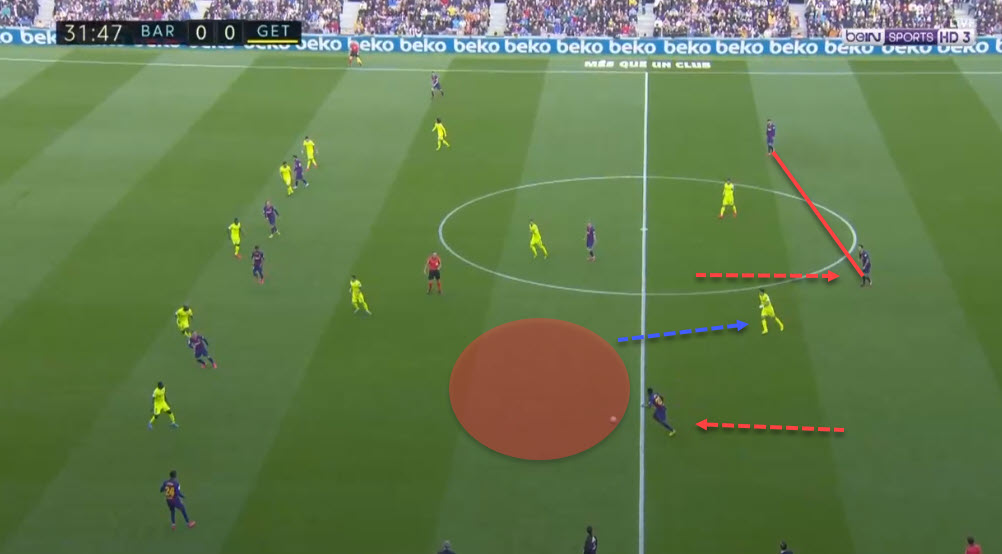 You can see that sequence in the image above. Getafe were in a mid-block as Barcelona approached their half of the pitch but Busquets and De Jong were boxed in by their forward players. Busquets dropped in line with Piqué, dragging his marker with him and pushing Umtiti wide.

As a result, the Frenchman can run with the ball before deploying a pass into the feet of one of his forwards. The general idea with these tactics is to recycle the ball to a free defender, allowing him to move forward to progress the play. In those instances, a midfielder will drop as cover, making sure the backline still exists once one of the defenders has moved out of their shape.

A similar thing can be seen below as Busquets once again drops in line with Piqué to form a make-shift centre-back pairing and allowing Clément Lenglet to push forward with the ball. 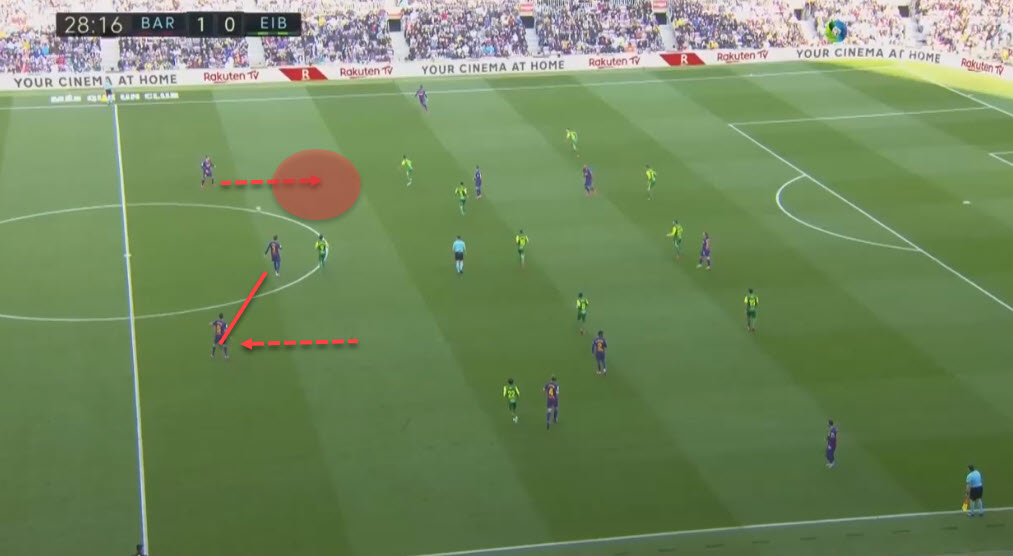 Setién has certainly enhanced Barcelona’s effectiveness in the first phase of their build-up play by increasing the importance and general use of his backline, especially the centre-backs and the goalkeeper.

Both roles now have much bigger tasks in getting the ball out from their first third of the pitch and into the advanced areas. Creating overloads by using the goalie as an outfield player, letting the centre-backs take goal-kicks and allowing them to venture forward with the ball has opened a plethora of different ways to progress play.

But while the first phase of their attacking tactics has seen an improvement, they still struggle in their final third and against low blocks. Join us next week when we’ll investigate that further in another tactical analysis scout report.