Emre Can was initially loaned to Dortmund from Juventus just prior to the transfer window closing. While the analysis shows that he didn’t see much success at Juventus, especially under new boss Maurizio Sarri, Can’s impact at the North Rhine-Westphalia club has been so profound that BVB secured his services for another three and a half year, with Can signing a contract less than three weeks after arriving on loan.

This scout report is a tactical analysis that looks to explain what makes Can such a good fit for Dortmund. It will examine how Can fits into Lucien Favre’s tactics at Dortmund, as well as the different areas in which he makes Dortmund a stronger club that can push to win the Bundesliga this season, assuming it continues after the Coronavirus pandemic is properly addressed by the global community.

Emre Can’s primary impact on Dortmund has been on its defensive struggles that it has seen this season. While Can took a couple games to settle in with his new teammates, his addition has led to Dortmund conceding fewer goals. Prior to his arrival at the end of January, Dortmund had allowed 11 goals in seven games. In the seven games since Can arrived, they’ve only allowed seven goals, with three of those coming in Can’s first game against Bayer Leverkusen — a match in which he was not completely comfortable with his role.

Emre Can was essentially brought in to replace Julian Brandt, who had been playing as a central midfielder next to Axel Witsel. Whether it was a 4-2-3-1 or their more successful 3-4-3, Brandt and Witsel worked together in the midfield. Dortmund are still prioritising the 3-4-3 formation 70% of the time, but now Can has replaced Brandt, and their defence has tightened up accordingly.

When looking at the statistics over these sets of seven games, it becomes clear that Brandt was progressing forward up the pitch more consistently; as a result, he logged 1.29 xG and .98 xA (assists). Conversely, in a similar amount of minutes, Can has only recorded .19 goals and .09 xA. This suggests that Can does not advance up the pitch in as much of a playmaking role, which allows him to provide more cover for the back line with his positioning. Additionally, Can (135) and Brandt (123) have engaged in a similar amount of defensive duels; however, Can’s win percentage in those duels is 13% higher, proving him to be more defensively efficient.

What also makes Can stand out are his defensive recoveries, particularly in the opponent’s half. Can has 57 recoveries compared to Brandt’s 34 recoveries. This 67% increase makes Can seem even more valuable to Dortmund’s defensive efforts. What’s more impressive is that 31 of Can’s recoveries have happened in his opponents half as compared to Brandt’s 17. That means Can is an improvement on Brandt on regaining possession in the opponent’s half by 82%. One final statistic to note: Emre Can is 7% more efficient than Brandt with his backwards passes (99% compared to 92%). While back passes aren’t often seen as critical to a football team’s success, it does mean that Can helps Dortmund keep the ball in their possession more frequently than Brandt did. When taking into account these statistics, It’s no wonder that Dortmund moved so quickly to sign Can until 2024.

One of the reasons Can has such a successful backward passing rating is due to his role in Dortmund’s build-up and his ability to read the space that’s opening on the pitch. A lot of that space comes from his pairing with Axel Witsel. Both he and Witsel operate in the centre of the pitch, and their coordinated movement becomes incredibly important when Dortmund are in possession. 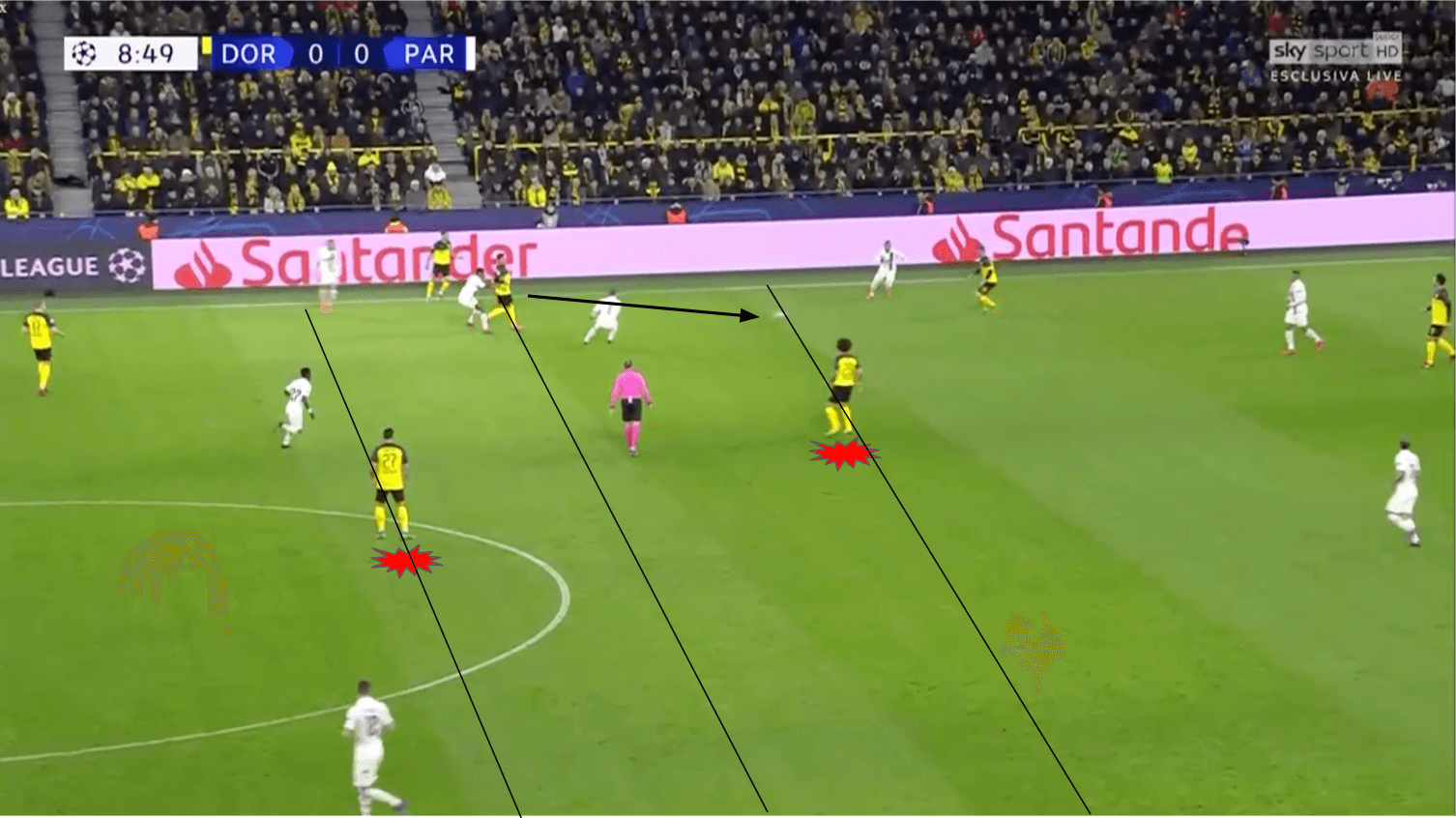 Both Can and Witsel are marked in red, with Can, number 27, higher up the pitch. In the Dortmund build-up in this instance, there were multiple horizontal lines that were passing options for the man who was about to receive the ball. If Can were to move back to Witsel’s line and therefore be at the same depth as him, it would have been much easier for PSG to mark both of them at the same time, as they operate in very similar vertical spaces. However, as they were not on the same line, Idrissa Gueye, PSG’s holding midfielder, had to make a decision to mark either Can or Witsel, which, in this case, allowed Witsel to be an option for Dortmund to play out of the back. 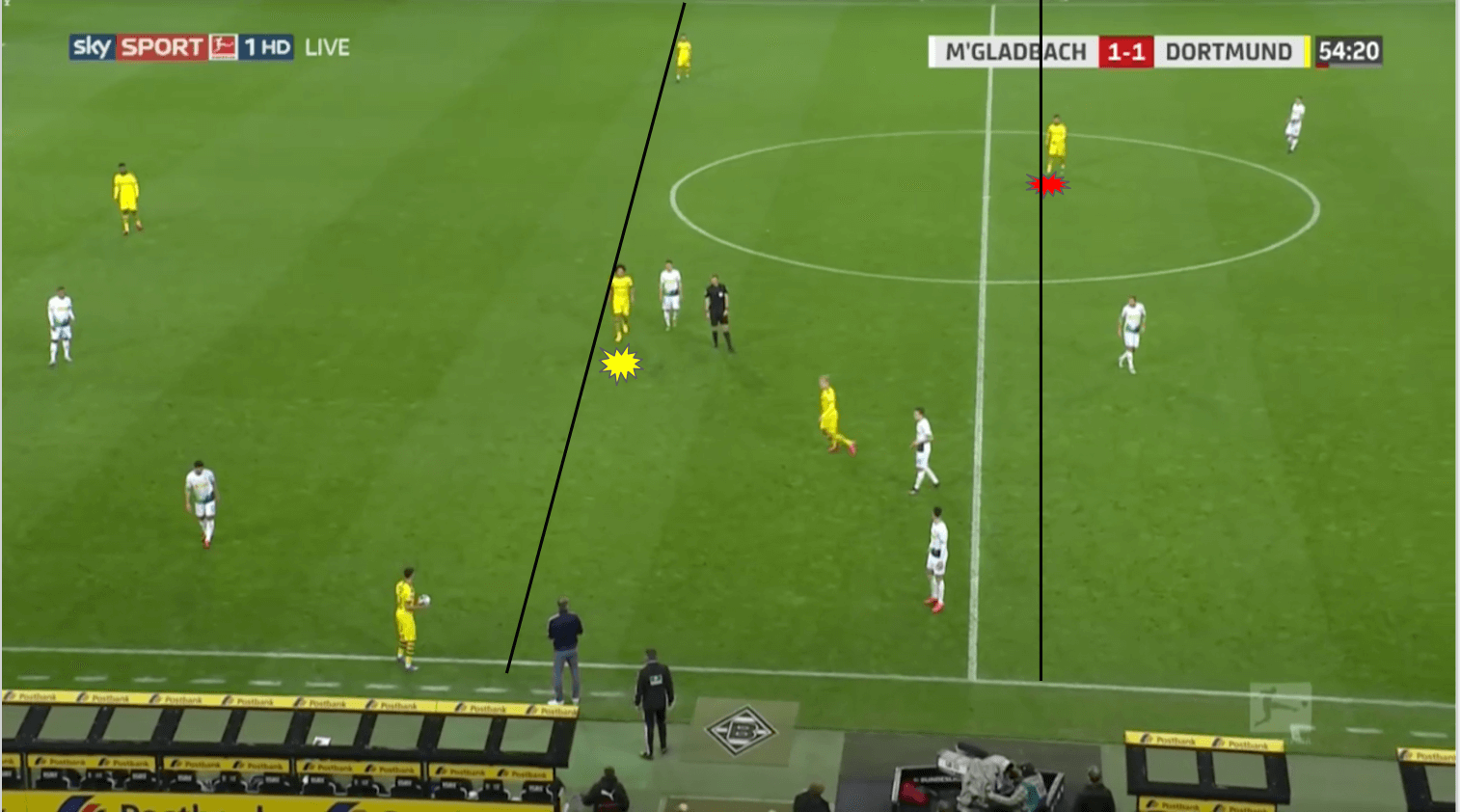 Against Borussia Mönchengladbach, Can and Witsel continued to stagger themselves, creating depth in the process. In this instance, Can, marked with red, had not only created his own horizontal line where he was a passing option, but he also was able to occupy space in the centre of the park that Dortmund could now play through from the throw-in.

Both Can and Witsel have mastered this staggering, particularly when trying to play out of the back. This balance has made them an effective pairing when attempting to go forward; luckily for Dortmund, their defensive pairing has been just as successful as when they’re in possession.

Regardless of the formation, Emre Can and Axel Witsel have been pairing together to close down the middle of the field by coordinating their movements occupying important space. One example of this is Dortmund’s defensive 5-2-3, which they’ve used against Borussia Mönchengladbach and Eintracht Frankfurt. In this defensive formation, Dortmund leaves a lot of space available in the half-space, just outside of the Can-Witsel pairing. By leaving that space open, Dortmund invites teams to play into it, as both Can and Witsel are occupying the centre of the pitch. 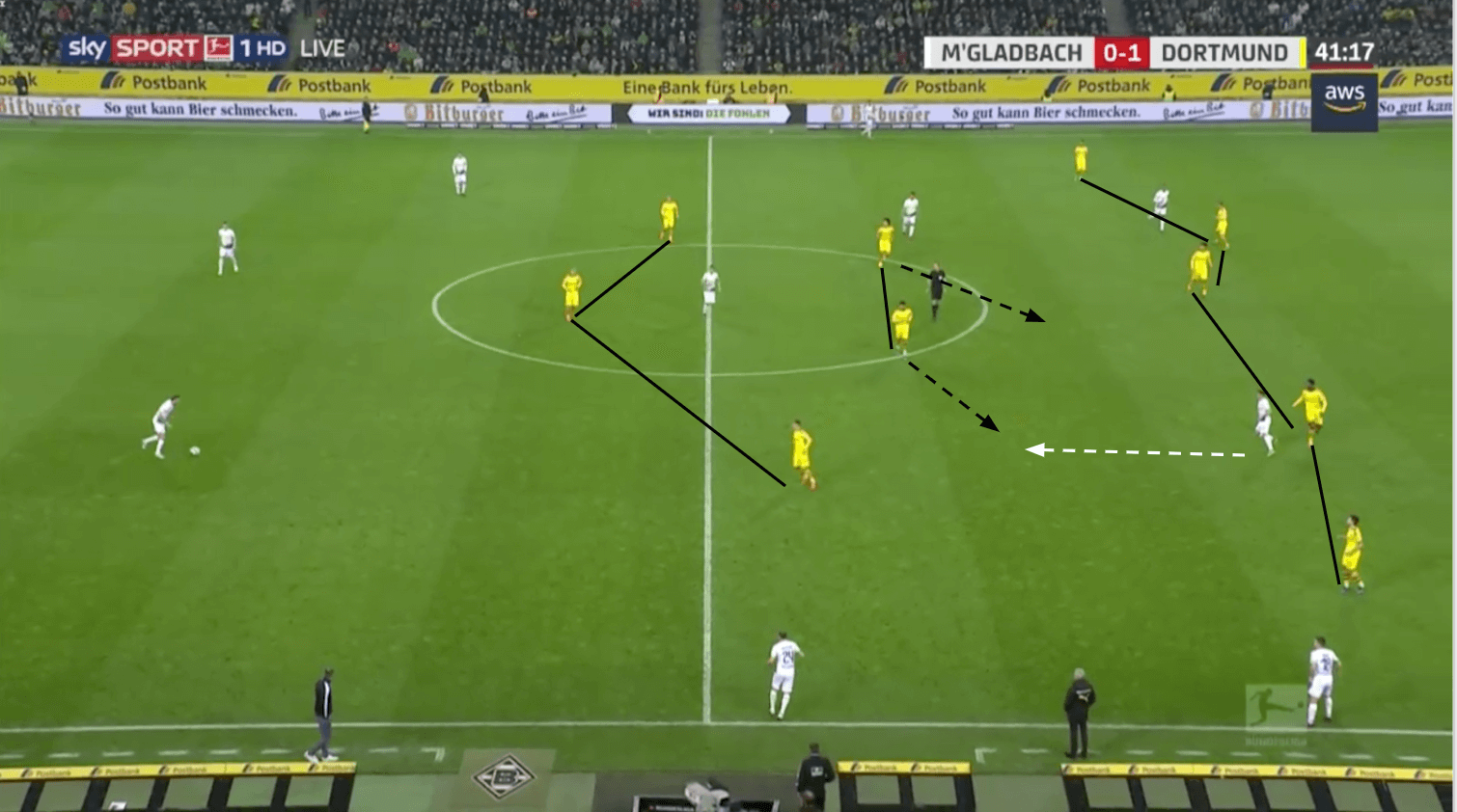 When teams do play into that space, Can and Witsel react accordingly. If Gladbach’s player were to check to the man with the ball, Can slid over to provide pressure on him and forced his pass out wide, where Dortmund have multiple defenders. As Can slid over to provide pressure, Witsel provided defensive cover in the centre of the pitch, protecting from any horizontal passes being made in the space between the line of five and the line of two. Gladbach and Frankfurt could not play through Dortmund at all; instead, they’re forced to play around them, resulting in a lot of longer crosses that are less likely to find their targets. If the ball was switched to the other side of the pitch, the roles were reversed: Witsel provided pressure and Can protected the space in the centre. 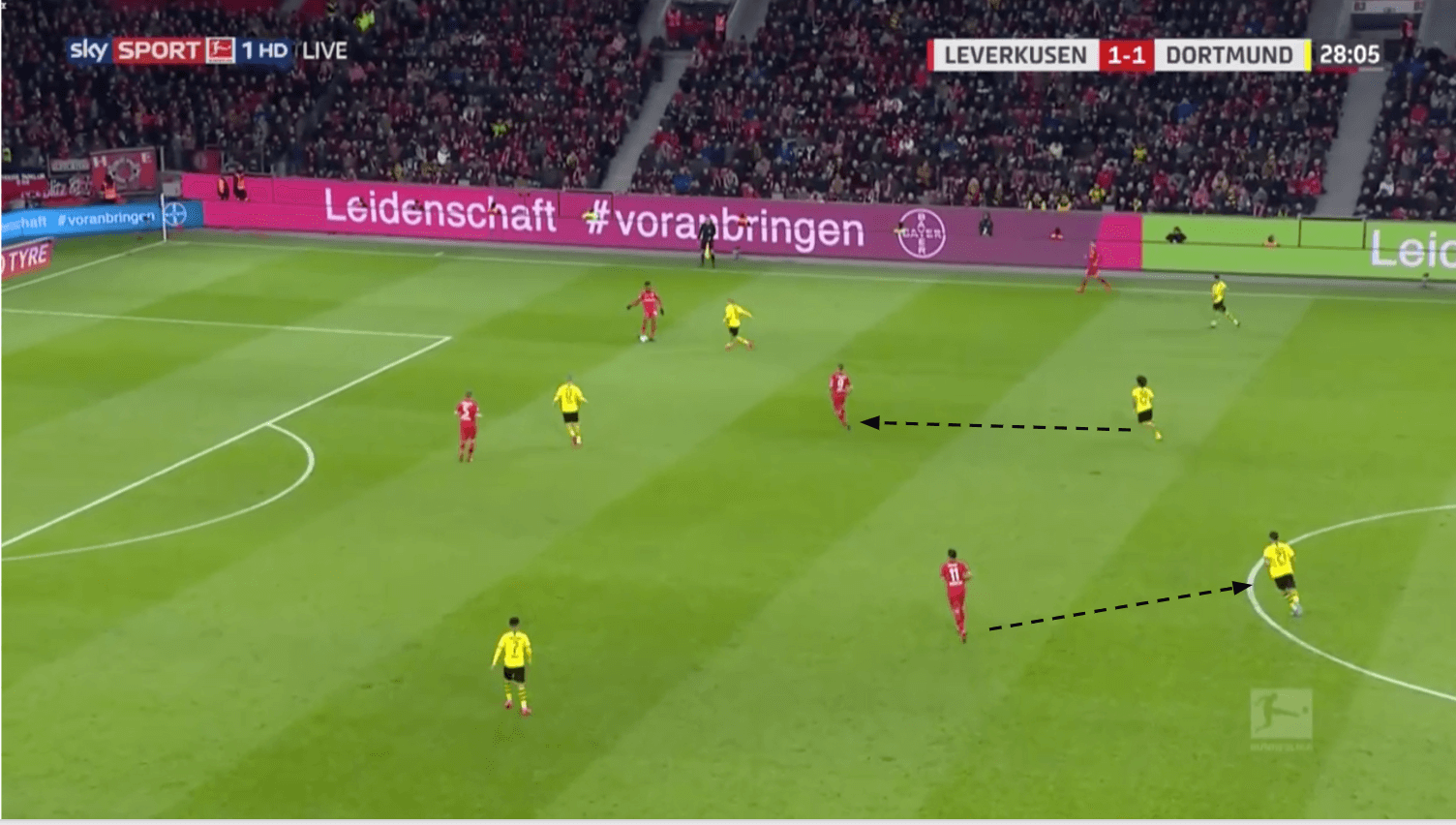 Against Bayer Leverkusen, Dortmund came out and defended in a 4-4-2 formation. Again, Can and Witsel were working together in the centre of the pitch, this time accompanied by wingers when defending as a line of four. When pressing higher up the pitch, Can and Witsel continued to occupy space in the middle of the pitch. As Witsel moved to provide pressure, Can shifted over into a more central role, not allowing Leverkusen to play through the middle. This resulted in the ball going back to the goalkeeper, who was forced to send it long, where Dortmund won the header. Emre Can’s quick adjustment to his defensive life at Dortmund has provided solidity in the centre of the park. They have become more difficult to break down defensively, which has resulted in them allowing fewer goals than their previous seven games without him.

Defensively, there’s one more important thing to analyse, which can’t necessarily be done by image. Since his arrival at Dortmund, he has committed 11 fouls. In the previous seven games, Julian Brandt, who Can replaced, committed a total of four, despite playing almost the same amount of time as Can has. Similarly, Axel Witsel’s has increased his fouling from three to 13 fouls. It seems as if Can has inspired a more physical presence in the middle of the pitch, not only with his play, but with the play of his midfield partner as well. This leadership and experience of knowing when and how to foul has made him a consistent starter for Lucien Favre at Borussia Dortmund.

While most of Emre Can’s role has been to shore up Dortmund’s defensive efforts, he is also able to take advantage of space in order to progress the ball up the pitch. He is particularly skilled at creating depth (as previously mentioned) and space, and then exploiting that space as teammates move. 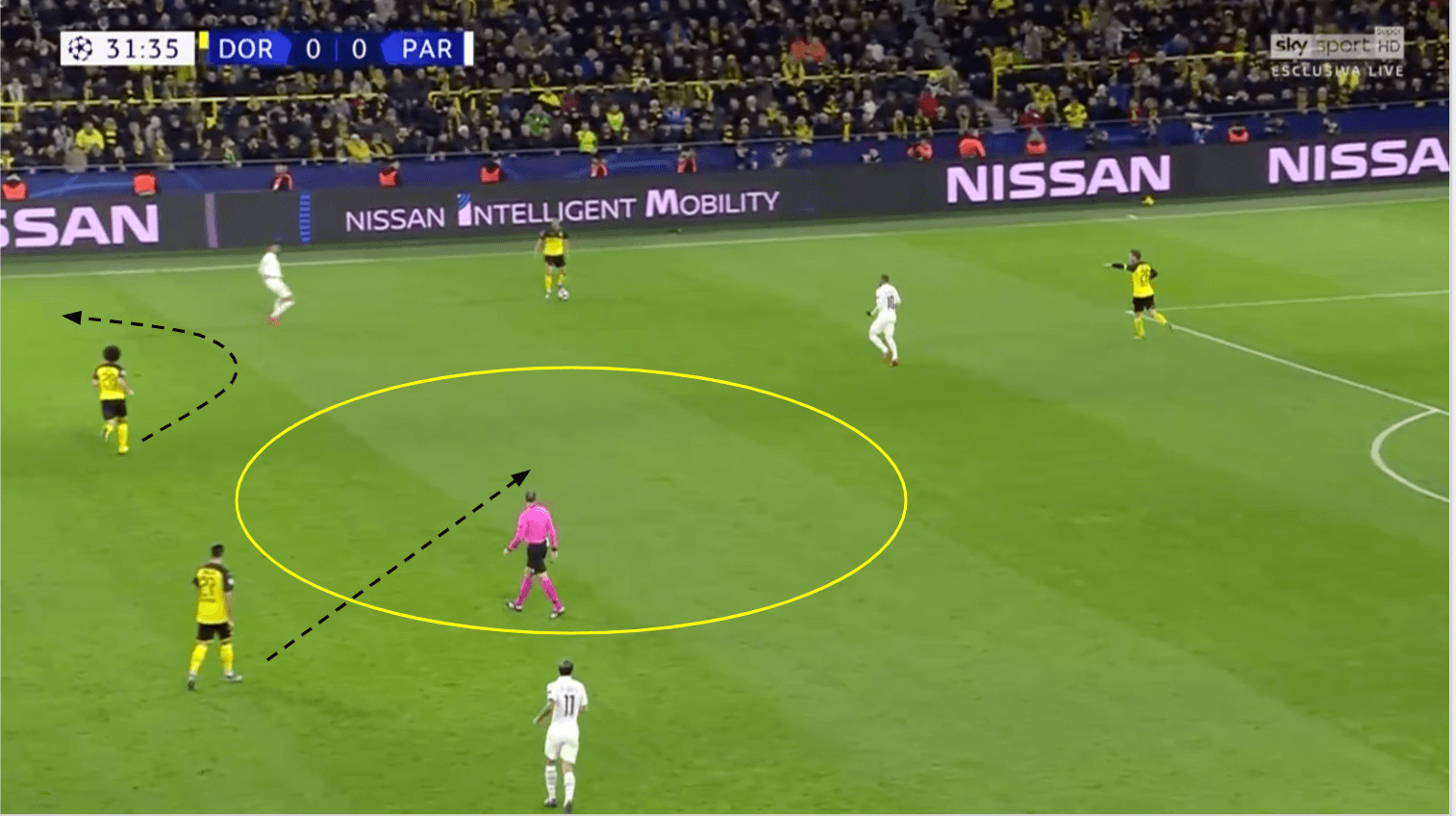 Here, Axel Witsel checked to Achraf Hakimi, who is the man in possession of the ball. As Witsel checked to him, he was followed by a defender. Accordingly, Witsel continued to run towards the wing, bringing his defender with him in the process. As he did, Can saw the large amount of space available for him to receive the pass, and he checked into that space. Two defenders followed Can, so he didn’t receive this pass, but he did create an open man on the pitch by doing so. 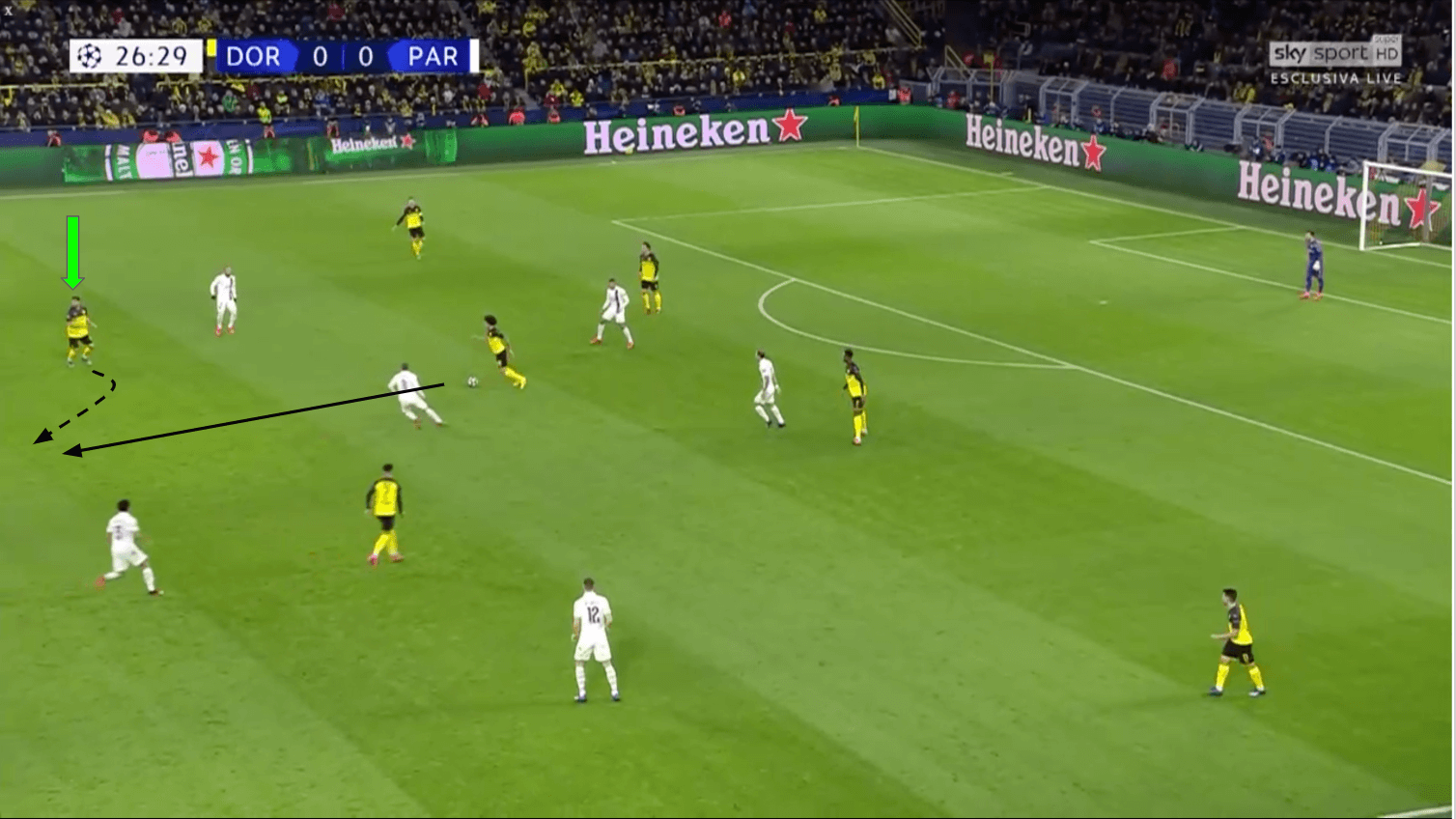 This is a wonderful example of Can manipulating defenders to create space. In this moment against PSG, Can saw Idrissa Gueye closing him down. Can took three steps forward to evade Gueye running at him, which then created even more space up the pitch. 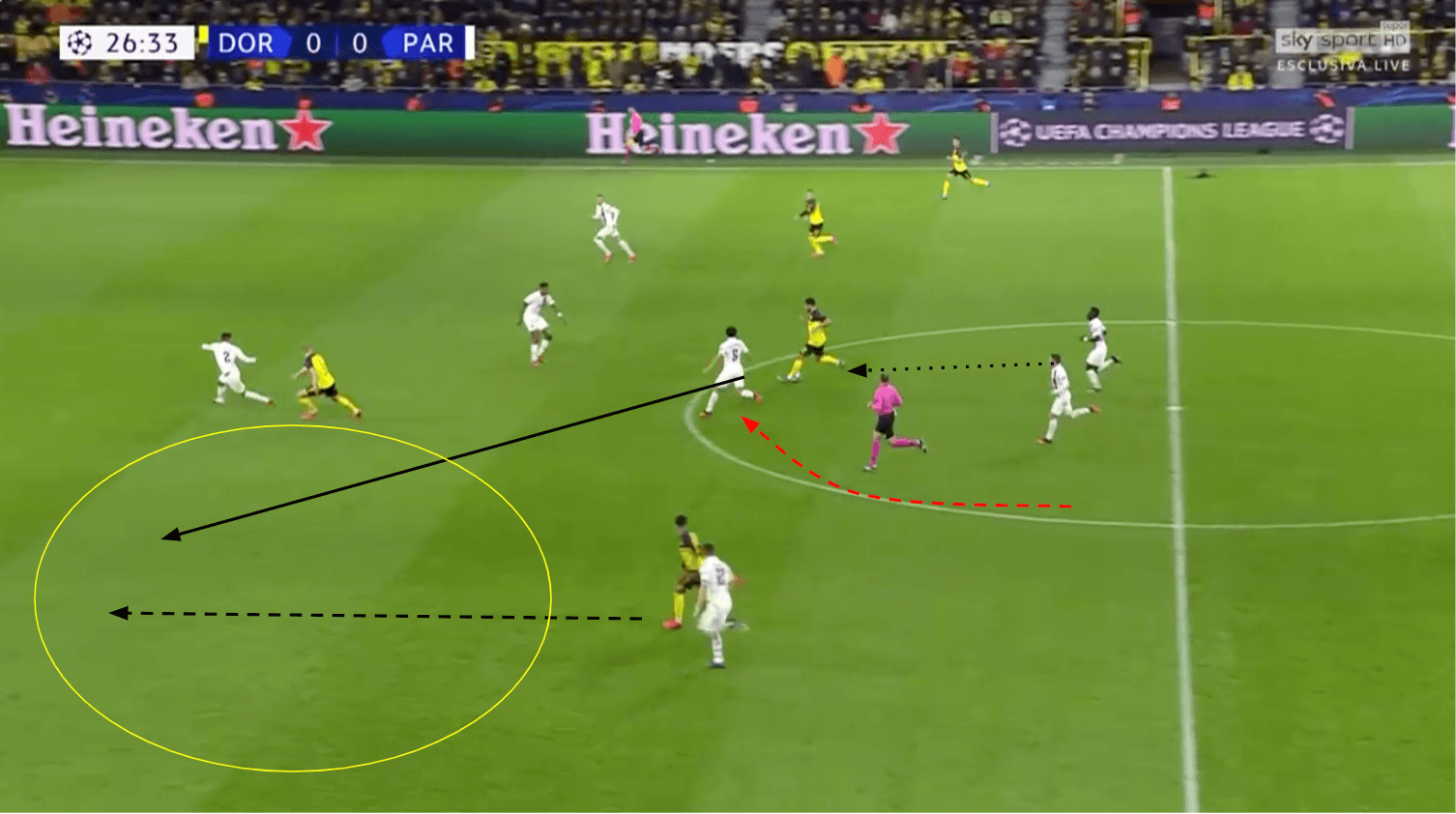 As he received the ball, Emre Can was relatively unmarked. Instead of playing an early ball into Jadon Sancho, who was sprinting up the field, Can held onto the ball, drawing the attention of defenders. This forced the PSG defender to close Can down, which opened up even more space for Sancho to run into. This was one of Dortmund’s first chances, and it all began because of Can’s perceptive run he made to eliminate an opponent with his spacing.

While his primary function has been strengthening them defensively, he has proven that he has the quality to create opportunities as a result of his spacing and positioning. Can can also hit the occasional wonder-strike, as many saw against Bayer Leverkusen. Emre Can has proven to be a terrific addition to Dortmund’s squad. As he continues to gel with his teammates, Borussia Dortmund will continue to be a force to be reckoned with, both in the Bundesliga and in the UEFA Champions League, which they should qualify for again.