Borussia Dortmund came into Borussia-Park to take on Borussia Mönchengladbach in the Bundesliga match between two teams vying for top-four finishes. In a match that saw ten yellow cards between the two teams, Dortmund were able to come out on top by the score of 2-1 thanks to goals from Thorgan Hazard and Achraf Hakimi.

This tactical analysis looks to understand the tactics used by Lucien Favre to lead his Dortmund team to victory. There will also be some analysis of the decisions Marco Rose made on behalf of Borussia Mönchengladbach when building a game plan to counter Borussia Dortmund. 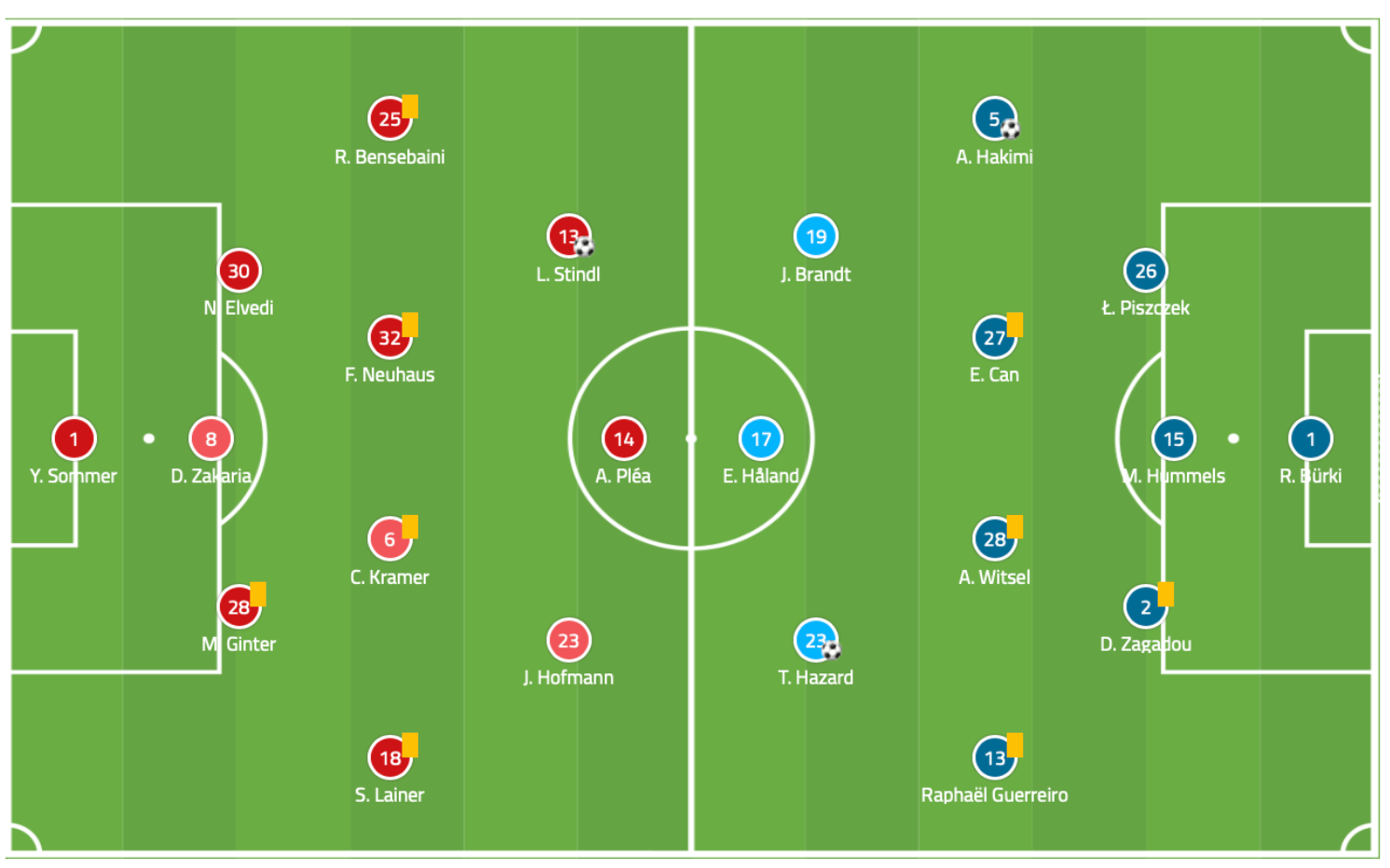 Both teams played the majority of the match in a 3-4-3, while also resting key players that could have determined the outcome of the match if they were provided more time on the pitch. Borussia Dortmund started the match with almost the entire squad the same as when they faced Paris Saint-Germain in the UEFA Champions League, with the back three consisting of Dan-Axel Zagadou, Mats Hummels, and Lukasz Piszczek. The midfield remained the same with Axel Witsel and Emre Can paired together in the centre of the pitch. The only change came with the front three, where Julian Brandt started the match in place of Jadon Sancho, who was subbed on in the 66th minute.

Gladbach’s team sheet found them also lining up with three defenders in the back, with Nico Elvedi, Denis Zakaria, and Matthias Ginter starting in the back before Zakaria came off injured after a collision with his goalkeeper Yann Sommer. Florian Neuhaus and Christoph Kramer were paired in the centre of the pitch with Ramy Bensebaini and Stefan Lainer operating on the wings. Lars Stindl, Alassane Pléa, and Jonas Hofmann were the men getting forward, with Hofmann making way for Marcus Thuram in the 65th minute.

One of Dortmund’s successes on Saturday evening was their ability to set themselves in a formation that became increasingly frustrating for Gladbach to try and break down. When not pressing, Dortmund set themselves up in a 5-2-3 shape, which allowed them to use their speed on the outsides with Hakimi and Raphaël Guerreiro closing down any potential threats on the outside of their shape. 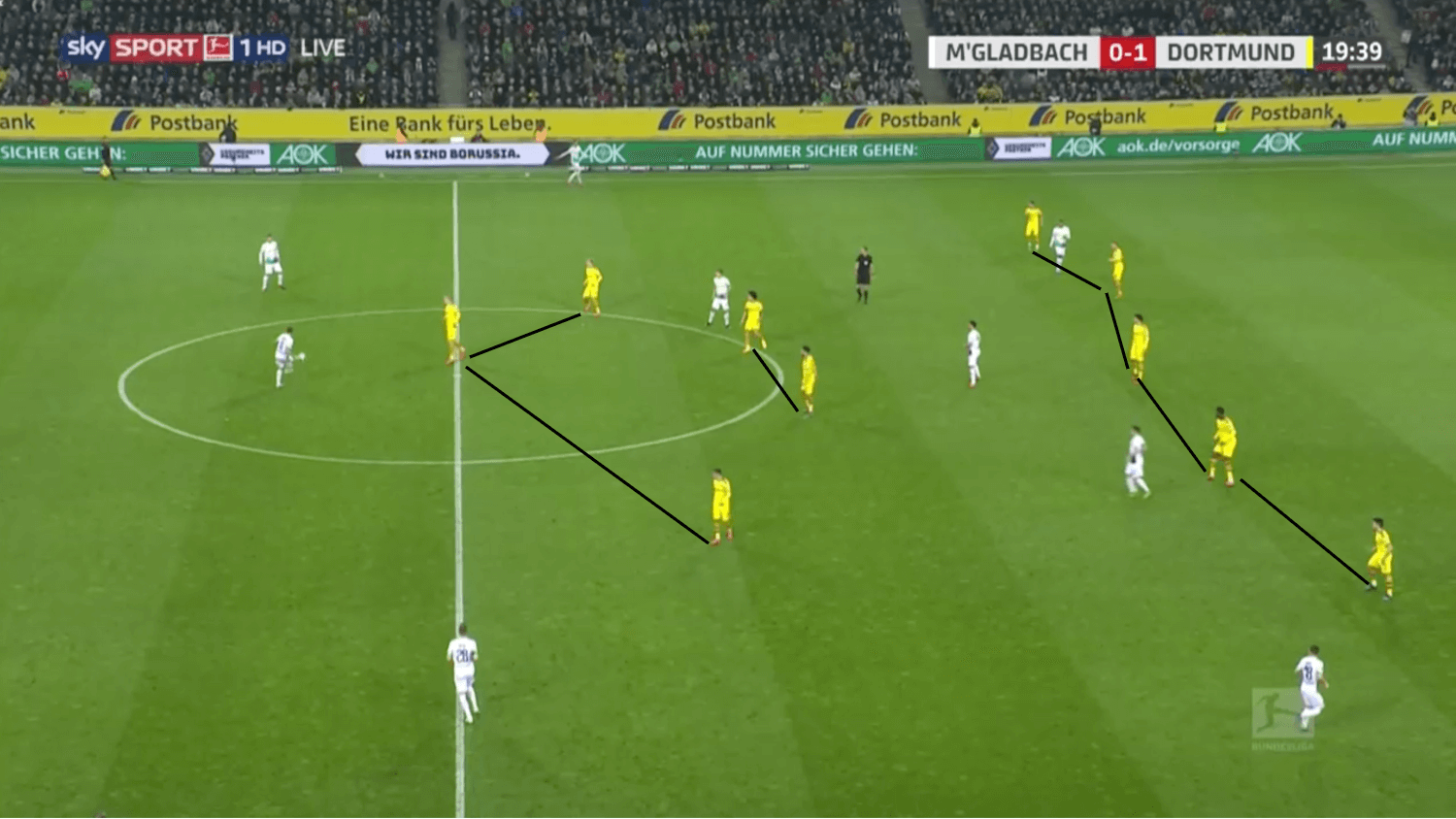 The first benefit of this shape is that Gladbach’s forwards were outnumbered, and so they were eliminated from being legitimate passing options for the centre-backs. Every single one of the attacking players has a Dortmund player close to him who would close him down within seconds. This meant that quite often during the match, Gladbach would pass the ball from the left side of the pitch to the right side, looking for space available. Most of that space was on the wings, as Can and Witsel patrolled the centre of the park. 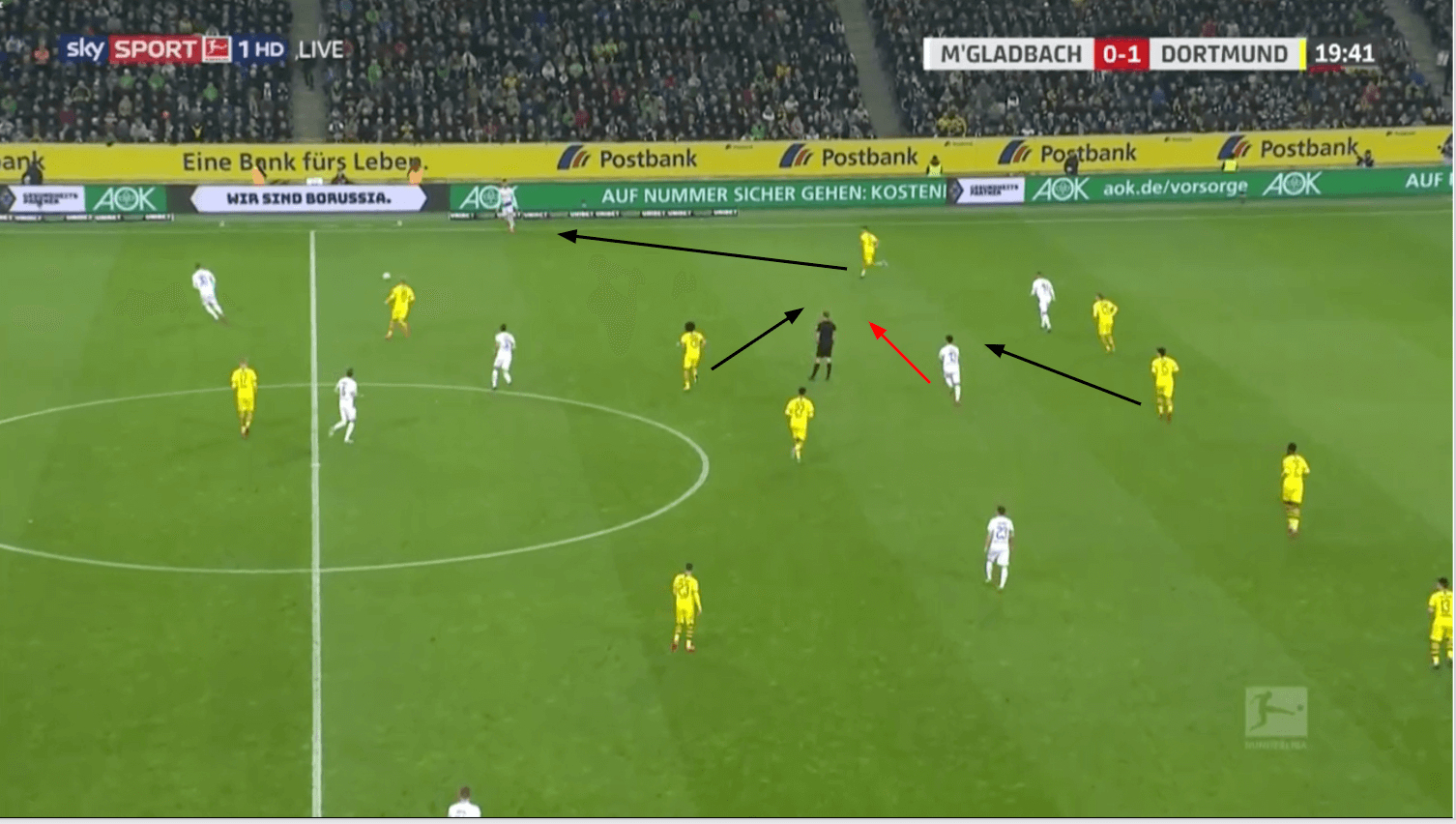 As Gladbach played the ball out wide, the outside defender in the back five, in this instance, Hakimi, would close down the man in possession. If a Gladbach central player would check to the ball (the red arrow), Dortmund would have either Witsel or Can (in this case Witsel) provide pressure, along with a central defender. More often than not, this allowed Dortmund to create a numerical advantage defensively, meaning they would win the ball back more consistently.

Dortmund’s 5-2-3 almost made playing through the midfield incredibly challenging. This was due to their ability to stay compact, as well as how well Witsel and Can worked together on their spacing. 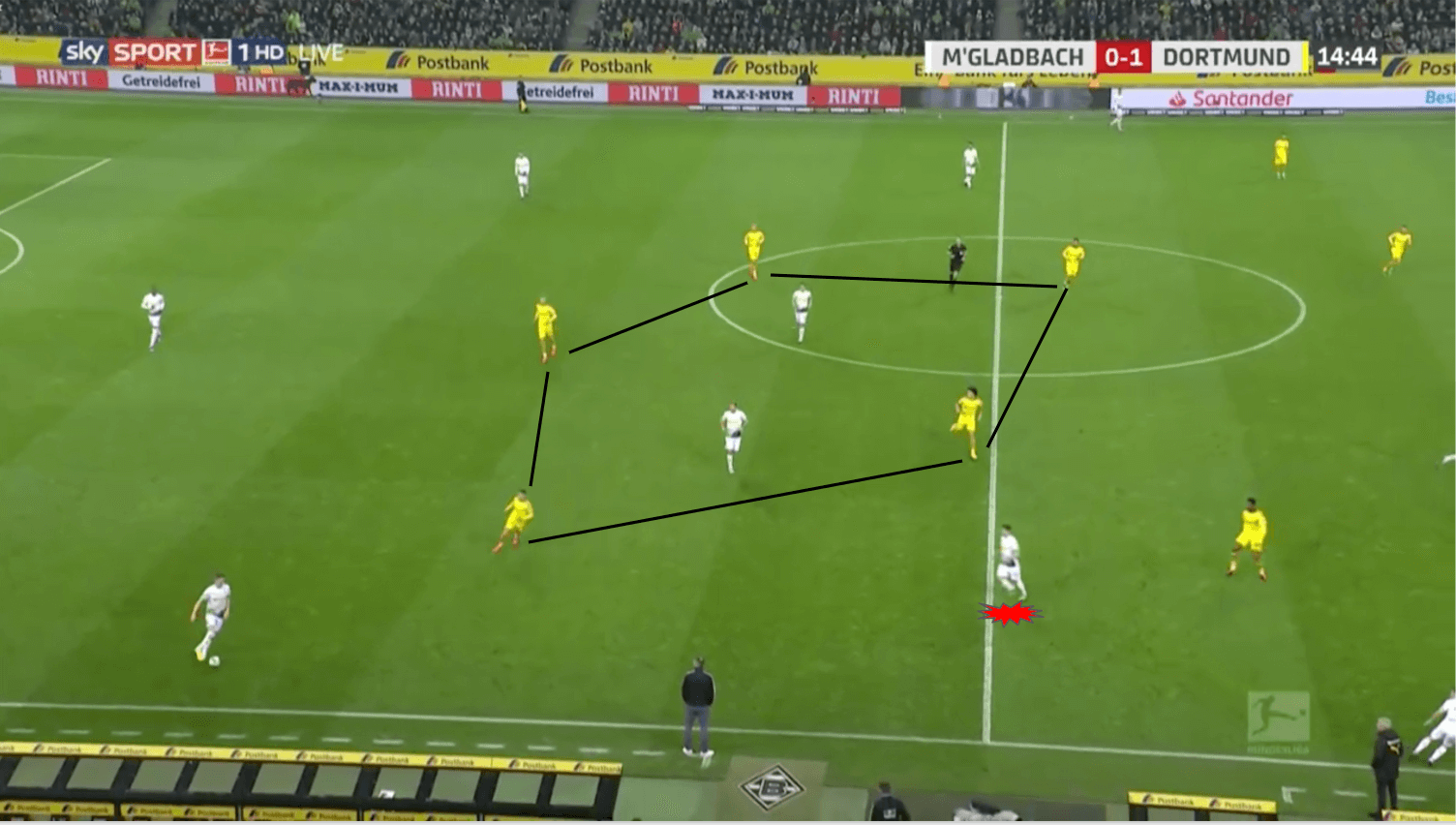 As seen above, Dortmund would essentially eliminate Gladbach’s two midfielders, Neuhaus and Kramer, with their defensive shape. Ginter, the Gladbach player on the ball, did not have any options. While the man marked in red appears to be open, he’s being closed down by Zagadou, essentially eliminating him from play. Witsel would also be an option to close him down, as he could come from the centre of the pitch from behind the player, which meant that even if Zagadou was slow in arriving, Witsel was still an option to win back the ball. This shape allowed Dortmund to force the ball out wide, often resulting in passes being sent over the top, which Dortmund would win back.

With Gladbach also creating a defensive advantage in the centre of the pitch, Dortmund would play the ball in a similar fashion where they tried to find space by recycling the ball from their winger on the left or right side, back to one or two centre-backs, then over to the opposite side. This dreaded “U” shape can often lead to a stalemate, particularly when both teams use it. There was not a lot of possession in the midfield, but this changed for Dortmund when Sancho was subbed on for Brandt in the 66th minute. 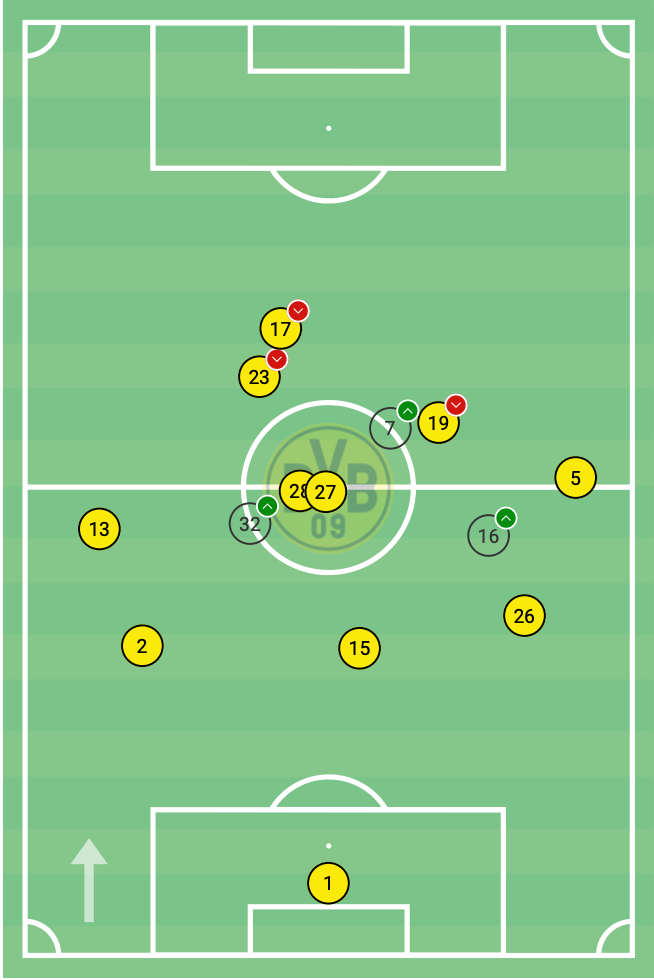 When looking at Sancho’s (number 7) average positioning, it’s clear he played a more central role in Dortmund’s attack, despite subbing in for Brandt, who was located more on the wing. While Brandt’s positioning is similar, Sancho’s more central positioning, combined with his skill, allowed for more penetrating passes that saw Dortmund gain the lead. While a narrow margin, his central positioning also opens up more space for Hakimi, who would be able to use his speed to get past defenders. 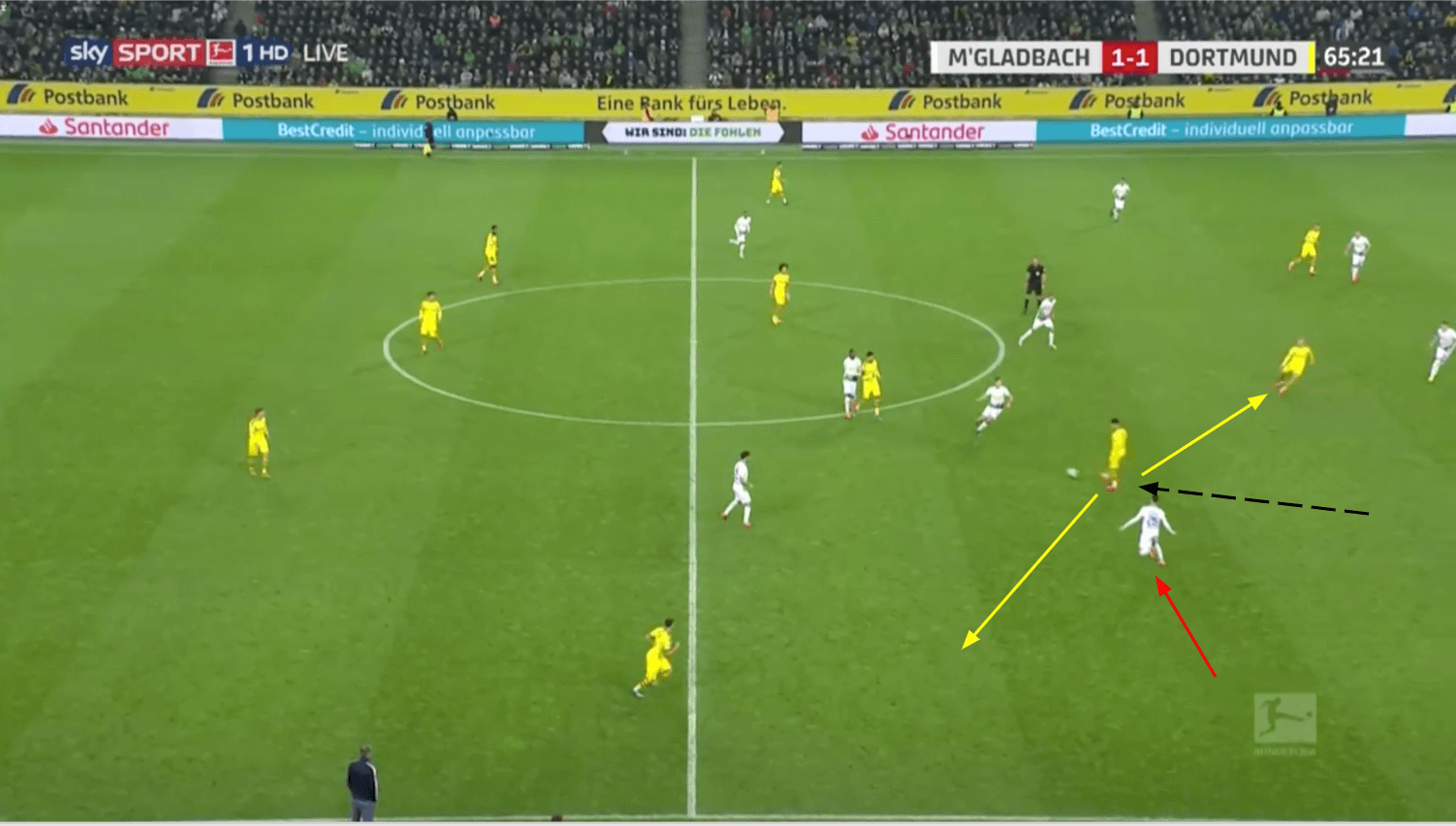 Here, Sancho checked into the half-space, where he had two available passing options. Just by getting himself into that position, he was able to bypass Gladbach’s midfield, which had been forcing Dortmund wide the entire match. Both Hakimi and Erling Braut Håland are options for Sancho, with Haaland being in between lines and able to attack a central defender if he received the ball. Sancho’s body shape upon receiving really only allowed him to play the ball to Hakimi, who now had more room to run into because of the defender who had to provide pressure on Sancho. 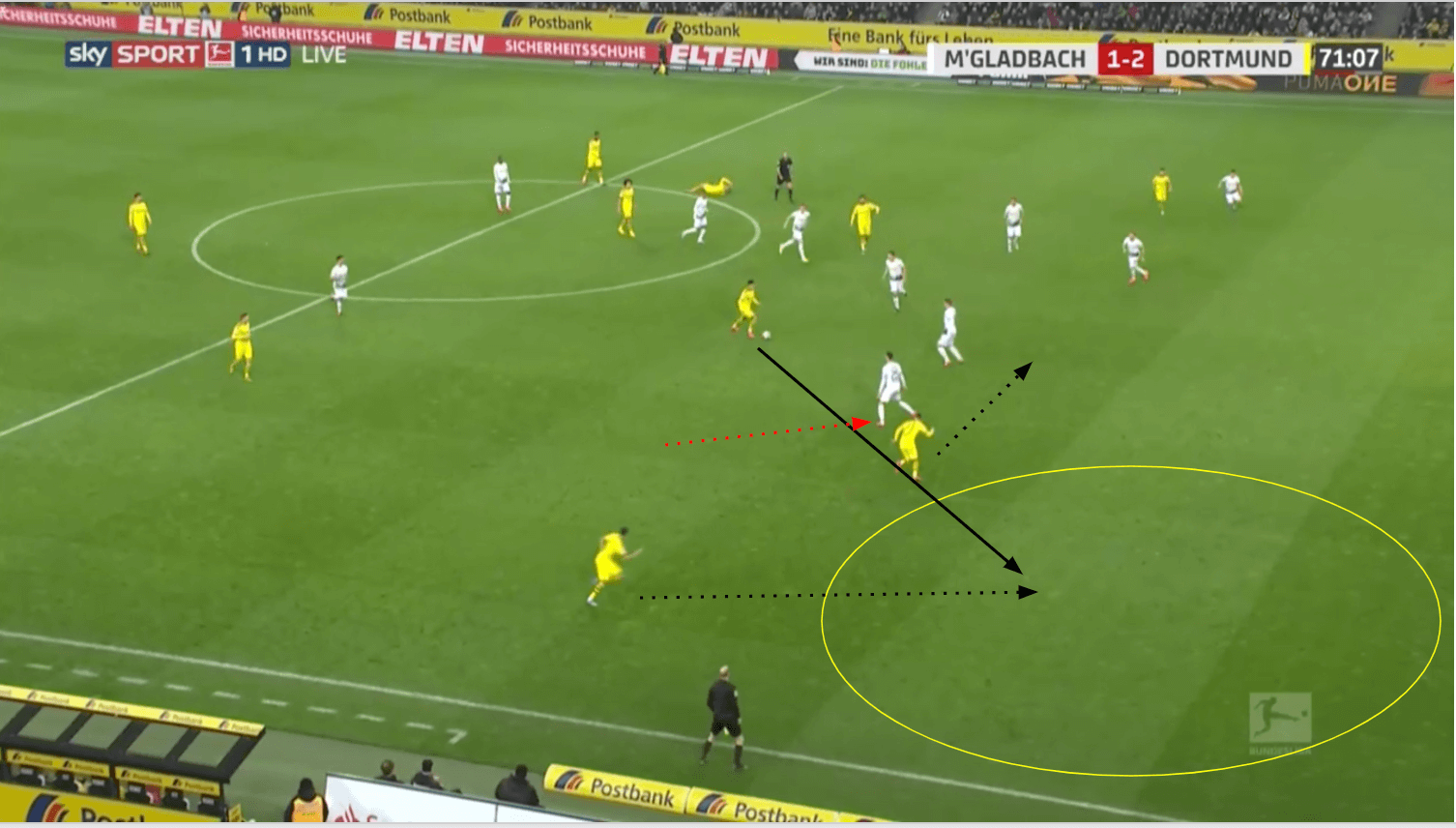 Minutes later, Sancho found himself in the same position on the pitch. Gladbach were still struggling with how to properly mark him. In this case, Bensebaini tucked into the centre of the pitch while Elvedi stepped to pressure Sancho. Hazard made a brilliant run behind Bensebaini, which distracted him long enough to create even more room for Hakimi to run into. With his pace, Hakimi gets in behind the defence, and he buried his chance from the right side of the goal, giving Dortmund the 2-1 lead. This goal ultimately went on to prove to be the winner, and it came about because of Sancho’s presence and positioning in the middle of the pitch.

As previously explained, Dortmund’s defensive set up caused a lot of problems for Gladbach going forward, particularly in the midfield. While their midfielders attempted to solve the problem, their solutions would often lead to a disconnect between the defence and the forwards, as the midfielders were more likely to drop and try to receive the ball. 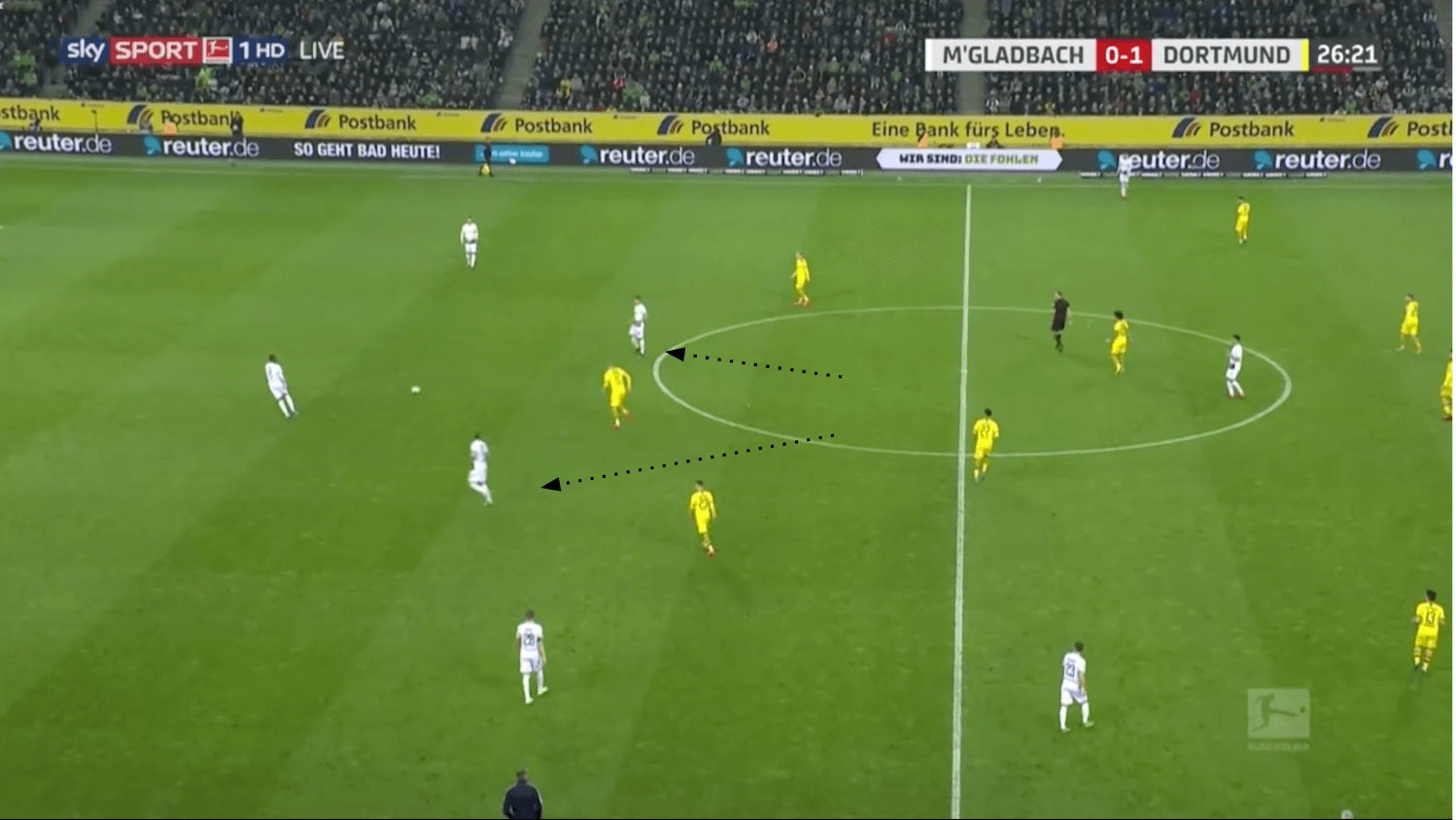 Here, both Neuhaus and Kramer decide to drop back in order to receive the ball. One problem with this is that Dortmund are now able to defend five Gladbach players with just three of their own, as the front line of Hazard, Haaland, and Brandt were still able to provide pressure on the Gladbach players. The other problem is that the only way for Gladbach to progress the ball forward in this instance is through a long pass in the air. However, as previously mentioned, Dortmund still maintained a numerical advantage with their backline, so the likelihood of those long aerial passes successfully finding a teammate was not high. 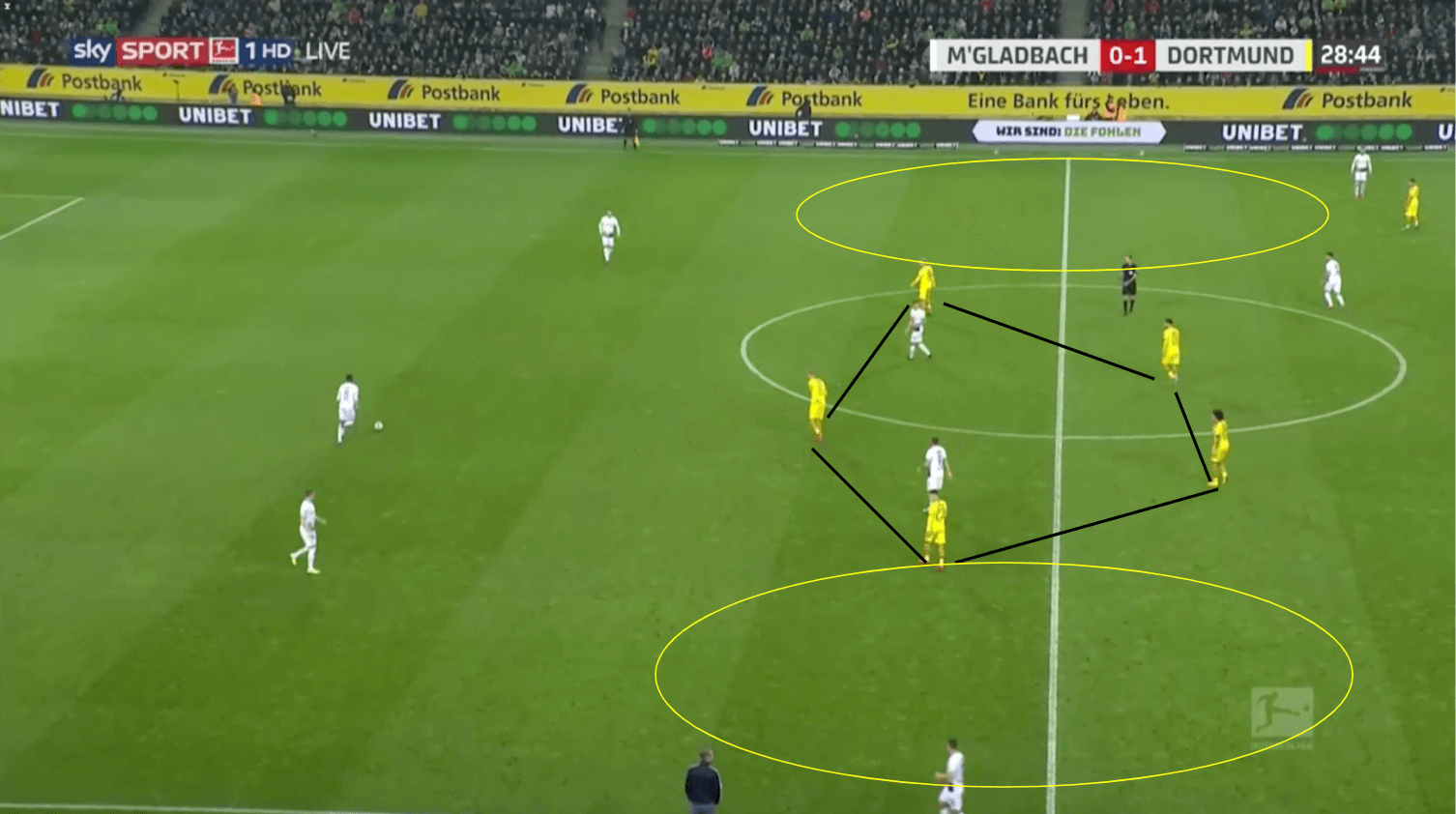 As Dortmund continued to use their defensive shape, it was evident where the space could be found. Gladbach would need to find a way to build up from the flanks in front of Dortmund’s defence. In the image above, the available space is not the most desirable for an attacking team, but it was the only thing Dortmund really offered. Part of the problem with their game plan was that Gladbach had men checking into this space, which would allow Dortmund to react and adjust. 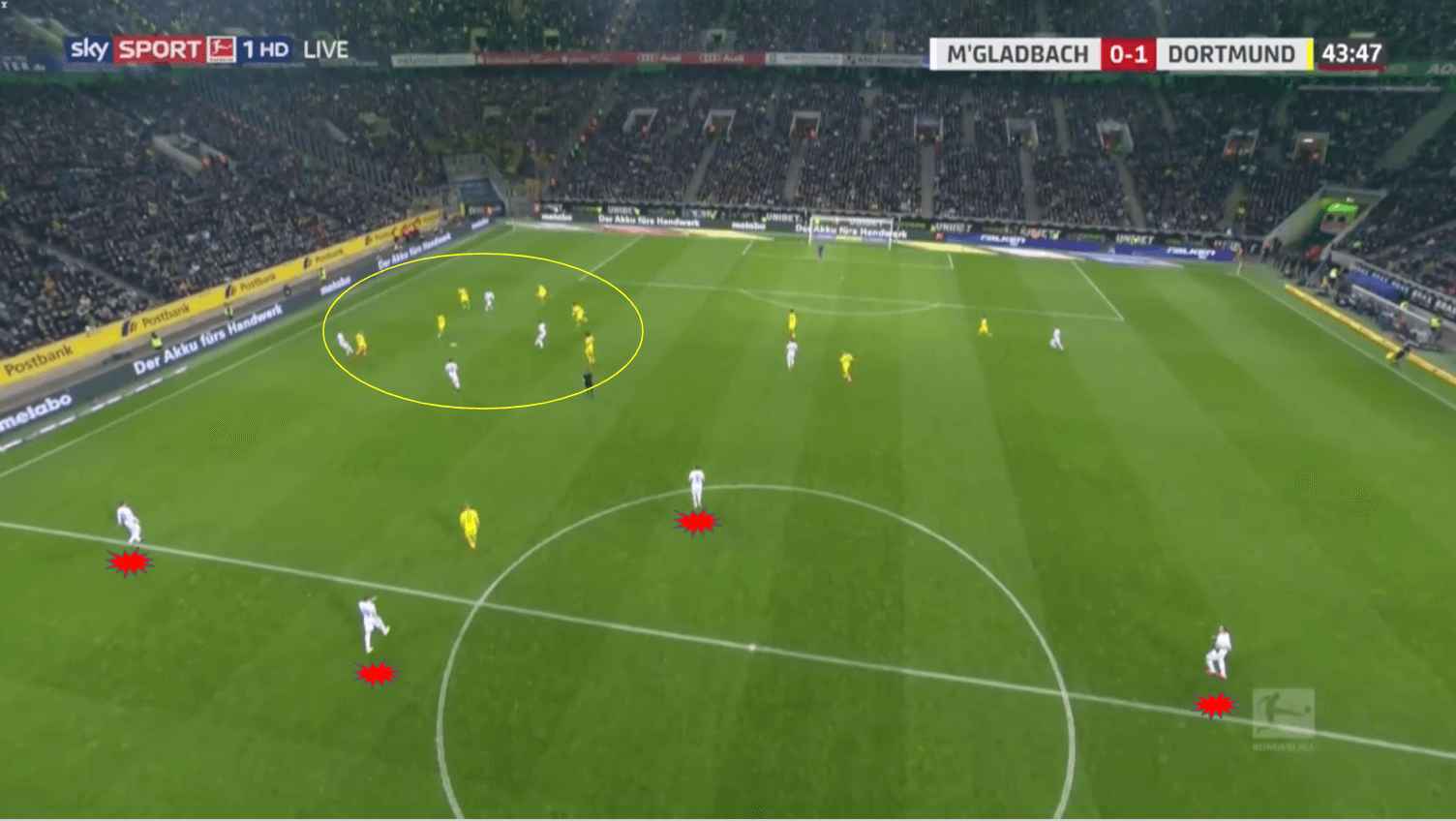 This image highlights some of Gladbach’s struggles in the first half. As they were attacking down the right side, Dortmund were able to overload that area, essentially creating a 6v4 in their own favour. As Dortmund created this overload, Gladbach had four men back (their three defenders plus a midfielder who shouldn’t be that far back). By holding these four back, Gladbach is essentially attacking with six players against nine, which again is a numerical advantage for Dortmund.

An adjustment that could have been made, and eventually was when they went down a goal, was to switch to a four-man defence. By switching to four in the back, the outside backs could occupy the space outside the centre of the pitch, meaning that Dortmund had less time to adjust and pressure the ball, giving Gladbach more of an opportunity to get forward in the game’s final minutes.

While Gladbach struggled with breaking down Dortmund’s 5-2-3, they created their best chances when winning the ball off of Dortmund, usually in the centre of the pitch. This helped them create 2.03 xG compared to Dortmund’s 1.35 xG. After winning possession, Gladbach played with speed, which allowed them to create chances for themselves. First, Hazard lost possession in the centre of the pitch, and Hofmann found himself with the ball at his feet. He quickly sprinted past Brandt and found himself in space. 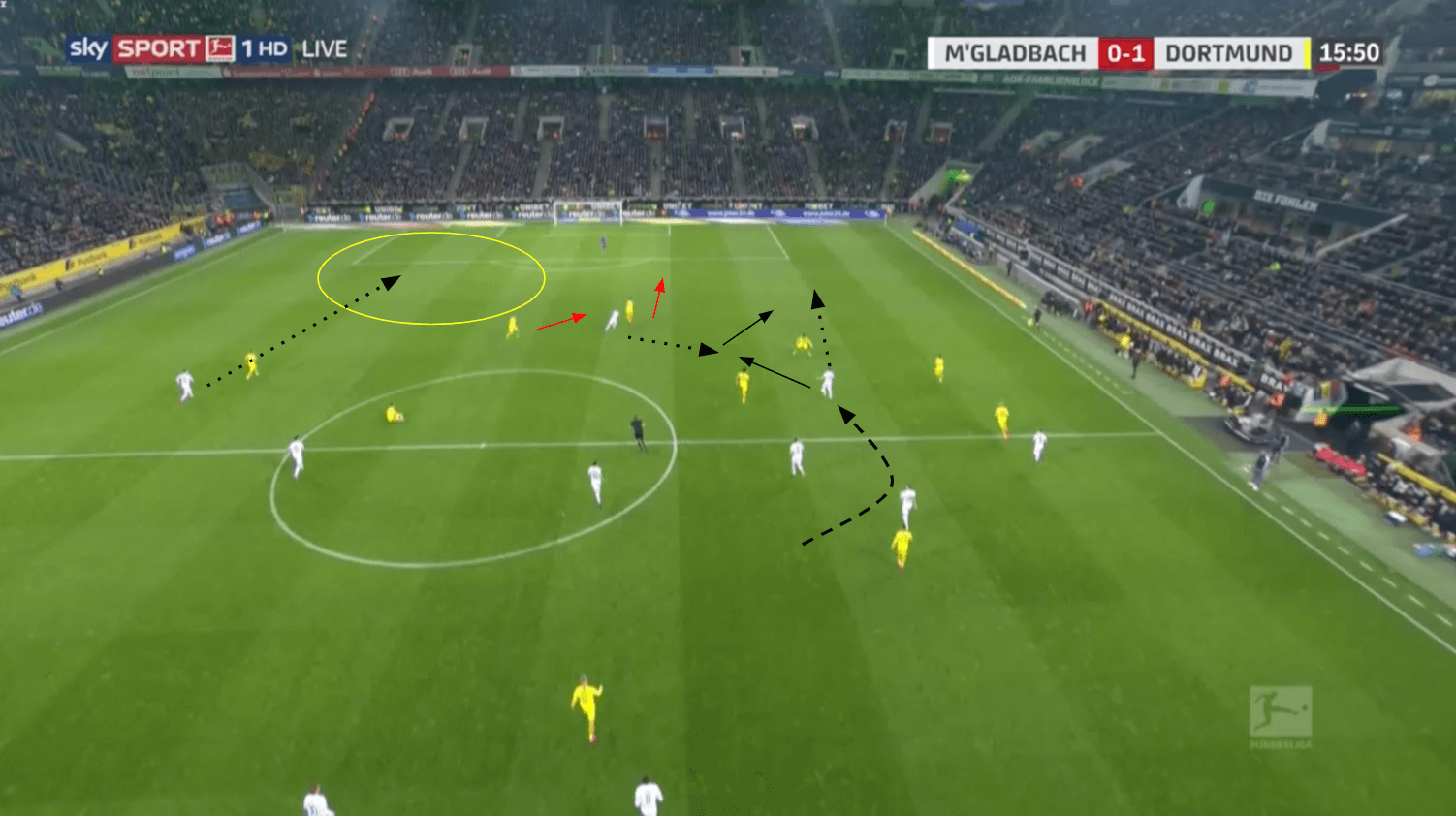 As Hofmann progressed forward, Pléa checked to the ball, dragging Dortmund’s right centre-back, Piszczek, with him. This movement was crucial to the move because it opened even more space for Bensebaini to exploit. Pléa played a quick wall pass back to Hofmann, who hit a first time ball to Bensebaini, who just put the ball wide of the target. While Pléa’s movement was important, all of this started because Gladbach played quickly without allowing Dortmund to set up in their defensive structure.

This quick, counter-attacking style when winning possession in the midfield continued to be Gladbach’s best option, setting up a chance that most could not believe was missed. 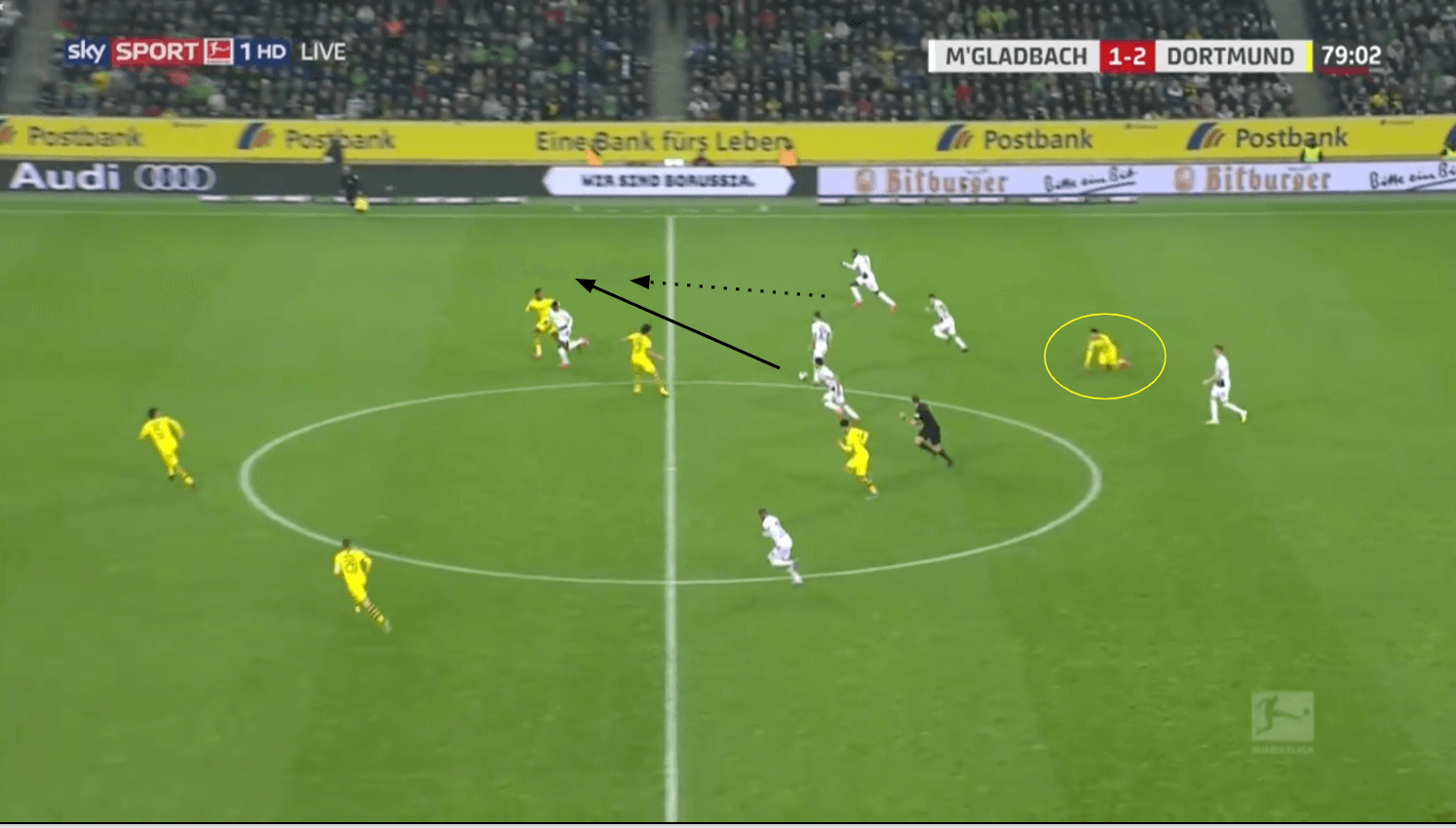 Sancho was dispossessed in the middle of the pitch, where he was severely outnumbered by Gladbach players. The ball was quickly sent out wide to Thuram, who beat one Dortmund defender. Gladbach had six players going forward, and despite the fact that Dortmund had Can running back, the fact that Thuram beat his defender meant it was still a numerical advantage for Gladbach. The runners made their way into the box, and the ball was crossed on the ground to Breel Embolo, who was unable to finish what would have been the equalizing goal, despite being unmarked six metres in front of goal. Gladbach will rue their chances missed, as they created enough opportunities through their quick play after winning possession to at least earn themselves a point.

Dortmund will be happy with their victory, as it moved them into second place in the Bundesliga behind Bayern Munich, who beat Augsburg on Sunday. While pleased with their result, Dortmund must now turn their heads towards Europe, as they take on PSG on Wednesday.

Borussia Mönchengladbach only need to focus on the Bundesliga for the remainder of the season, as they were eliminated from the Europa League earlier this season. With only having to worry about one competition, Gladbach should be able to find their way into Europe again, as they currently find themselves in fifth place, which is the final guaranteed European spot in the Bundesliga.