The “Wayne Rooney Derby”, that’s what the media labelled the match as Man United travelled to Derby in the next round of the FA Cup. The Rams entered the game looking to overturn a terrible record against Man United, having lost in their previous eight FA Cup ties against them.

Man United, on the other hand, have seen a recent upturn in fortunes. New man Bruno Fernandes has sprinkled some quality on a youthful side who are unbeaten in eight matches across all competitions.

On the night it was the Red Devils who progressed, comfortably seeing themselves through to the next round scoring three without Derby landing a punch.

In this tactical analysis, we look at the tactics used by Ole Gunnar Solskjær’s men and how this strangled Derby into submission. We also provide an analysis of how Derby’s tactics stalled, looking at the improvements required if they want to push for a playoff spot. 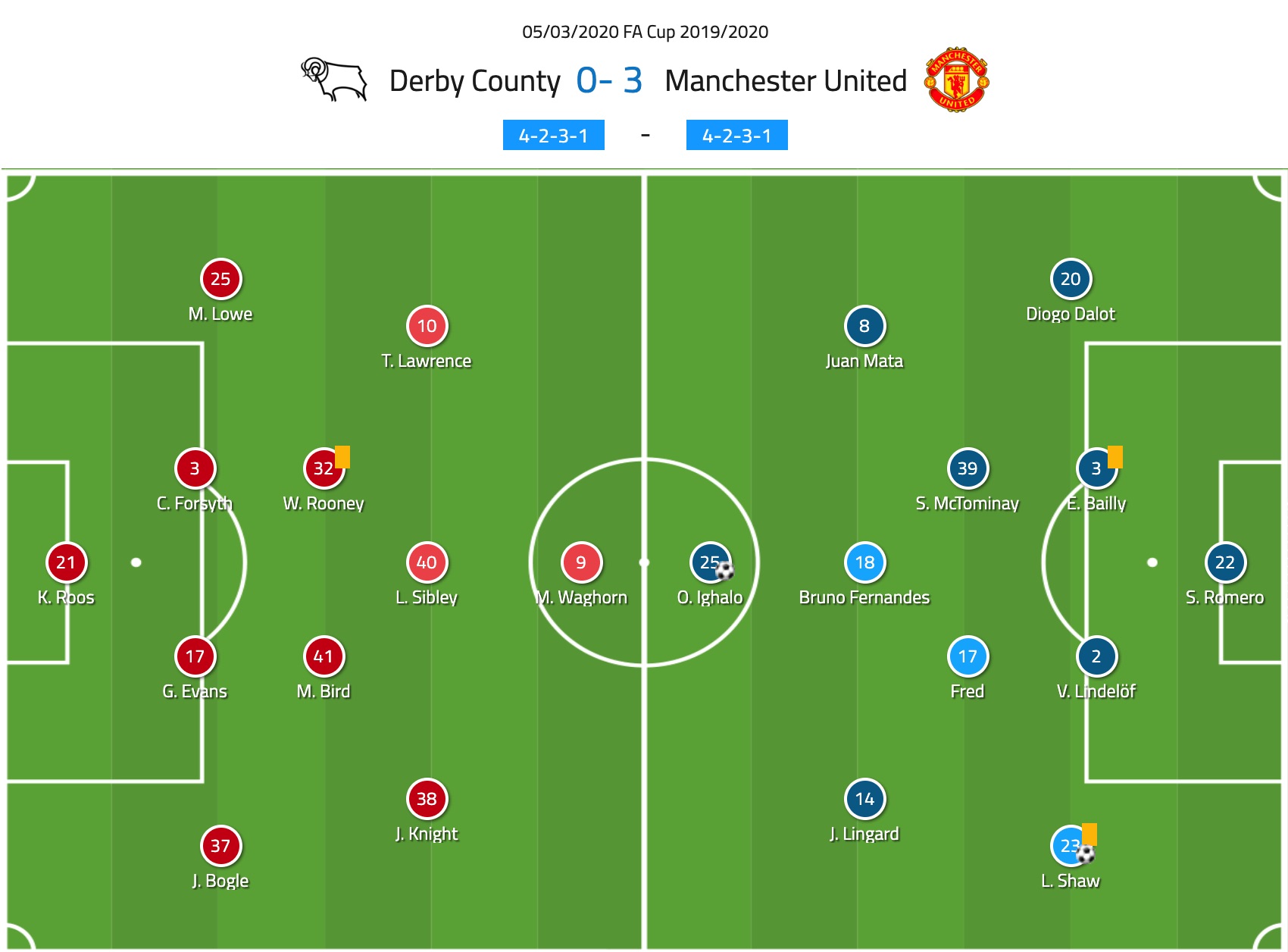 Phillip Cocu lined his side up in a 4-2-3-1, with Rooney operating in a double pivot at the base of midfield. The veteran was deployed in a deeper-lying playmaking role, where his passing ability was given space to flourish. The running in the centre of the park was covered by Max Bird and Louie Sibley, with the latter operating in a more advanced position to support Martyn Waghorn in transition. Jason Knight and Tom Lawrence injected pace as the inside forwards. The pair operated in narrow channels behind Waghorn so they could be as effective as possible in offensive transition.

Solskjær’s men lined up in the same shape. Fred and the returning Scott McTominay offered the energy in the midfield, acting as a double pivot in possession and as a shield to the centre-backs in the defensive organisation stage. Fernandes continued in his favoured number ten role, the Portuguese international looked to knit patterns of play together using quick incisive passing. In support was Juan Mata and Jesse Lingard as United turned to the depth of their squad for the tie. The duo tucked infield to create passing angles in tight spaces, where quick interchanges were attempted to break through the Derby lines. This movement off the wings invited Diogo Dalot and Luke Shaw forward to join attacks using under and overlaps – which we look at later.

In the first half-hour, the game struggled to settle into its tactical pattern. But for a few chances, prolonged phases of poor passes, fouls and turnovers littered proceedings, as both teams struggled to find momentum in the game.

In possession, the home side struggled to build meaningful sustained periods of possession. We can see from their pass map that the double pivot was always heavily involved in the play, with Rooney and Bird each dropping deeper to collect passes. It was from here where the attacking cohesiveness of Derby faltered as the deeper-lying midfield unit struggled to connect with their attacking players.

We can see how isolated the attacking players were from the structure behind them. This was primarily due to the work rate from McTominay and Fred who covered passing lanes and doggedly harassed the Derby attackers. This led to lower percentage passes being played from the home team which often resulted in the loss of possession.

Off the ball, Derby looked to frustrate Man United by engaging them slightly higher up the field in a 4-4-2 shape. It wasn’t a full press in operation, but an aggressive defensive line supported by tenacity from the midfielders as Man United built their attacks from the back. The system’s narrow shape stopped passing into the attacking players but sacrificed space in the lateral areas, which United exploited.

The visitors game plan didn’t appear until the first goal from Shaw went in. As mentioned, up until this point Man United failed to use their superior possession to create anything meaningful. Possession sequences broke down in their infancy as quality, penetrative passing escaped the Premier League club. Once in front, Man United controlled the game using a slow tempo, recycling possession consistently and working the balls from left to right in methodical cycles.

Using this approach United were able to prize open passing lanes into Lingard, Mata, and Fernandes, all of whom stayed in the central zones. To keep their opponents pinned in and under strain, United pushed their full-backs extremely high and wide (seen above), giving the team natural width. This tactic forced Derby to either expand defensively, opening lanes into Fernandes or stay compact and surrender possession.

As they were chasing the game, Derby decided to be aggressive, which ultimately led to chance creation for United who managed 26 attempts on goal in the match earning an xG of 3.35.

Defensively, Man United sprung no surprises. A back four marshalled by Eric Bailly and Victor Lindelöf were protected diligently by McTominay and Fred. The unit sat deeper in a rigid shape when out of possession allowing the opportunity for fast offensive transitions when the ball was turned over.

In this section, we look at how United – despite facing a solid mid-block – were able to bypass their opposition with relative ease through the use of their full-backs.

We start by looking at the left flank, where Shaw excelled. Above we can see United in a possession cycle, moving the ball from right to left as described earlier. Derby have adopted their mid-block 4-4-2 blocking passing lanes into the double pivot.

As a result, the passing lanes into Shaw have opened up. Man United took an aggressive as possible position in these situations by moving Shaw far away from his centre-back to squeeze as much space out of the passing angle. This meant United created plenty of width, forcing Derby to repetitively shift their defensive structure laterally.

When the pass was moved into Shaw at the right tempo, United advanced forward in the small window of opportunity to penetrate. We can see above that as Shaw received the ball Derby struggle to get across in good time allowing time to the English full-back. In conjunction with the pass from the centre-back, United’s forwards have made penetrative movements in behind the slightly higher Derby line – which was required to sustain a compact midblock. We can see above how the Derby full-back is forced forward to engage Shaw as the midfield unit attempt to get across. This opens up space in behind for Lingard, Mata and Fernandes to exploit.

To prevent this, Derby could have reacted differently. Instead of shifting into a 4-4-2 off the ball from their 4-2-3-1 shape, the home side could have operated in a narrow 4-3-3, as shown above. The system would still offer a narrow midfield, blocking the passing lanes into United’s danger players. But what it would have offered is more protection to the spine of the team when the ball was played into Shaw. Instead of just relying on the full-back and wide midfielder to get across, in a 4-3-3 Derby could have also bought a forward across also to prevent the overload and also allow Shaw less time to pick a pass. By moving the unit across from a 4-3-3 shape there would be less distance to cover in the lateral shifts, allowing Derby to engage with the ball player sooner.

When the left side was closed off adequately by Derby’s defensive shape, United recycled possession and looked to move the ball quickly to the other flank to attempt to penetrate using their full-backs on the right side.

This time, Mata took up his position in the wide space to stretch Derby’s shape. We can see above that the midfield of Derby races across to close down the pass into Mata, and in doing so he distances himself from his midfield unit, inadvertently opening spaces through the lines for Dalot to exploit. The Portuguese full-back notices the midfield open and breaks through with a powerful underlapping run.

All that is required is a simple layoff by Mata into Dalot to expose him 1 vs 1 with the Derby full-back. Again, if Derby were shifting in a 4-3-3 shape this wouldn’t have occurred as an additional player would be over that side in defensive support. Instead, by continually shifting laterally and naturally tiring as United controlled the tempo, gaps constantly appeared through the structure of Derby, allowing Man United to constantly develop attacks into the final third.

It was from these positions that Man United punished the home side, whose tactics couldn’t contain the Premier League opposition. A second and third added by Odion Ighalo put the game out of reach and sets up a next round tie against Norwich for Man United.

Solskjær will be pleased of another victory from his side who have put together a good run of form of late. The team are playing with a clear objective in mind, not just looking solid defensively, but created offensively – an area of criticism in the past. The new blend of players is starting to show promise and potential that the final picture isn’t as far off as some people speculated. The season is still very much alive for the Manchester club who are fighting not just for trophies on two fronts but for a Champions League place. You can’t help but feel that if European football is achieved and another good transfer window is had, Man Untied will finally be on the right path back to forgotten times.

Cocu and his men will be disappointed they weren’t able to cause a cup upset for the fans to remember. On the night their opposition were too experienced at controlling the game for the magic of momentum to spark and take hold in the stadium. The early goal backed up by a second soon after killed the tie before the half was over. Derby will now have to focus on their defensive problems and how they’ll start a late play-off charge, as time is running out in the season for this ambitious, talented, and arguably underachieving club.