Matchday 20 of the Bundesliga saw two of the best coaches in the league lock horns at the Red Bull Arena, with Julian Nagelsmann’s RB Leipzig taking on Marco Rose’s Borussia Monchengladbach. To get the cliché out of the way early, it really was a game of two halves, with the first half consisting of a Mönchengladbach masterclass that showcased their tactics, and the second half with Leipzig grinding their way through ten men Gladbach. In this tactical analysis, I’ll look at Rose’s tactical surprise which was a major key to the game, and look at how Leipzig were able to get back into the game having been tamed by Gladbach early on.

Gladbach’s surprise set up was their back three formation, which as I will explain in the next section had a massive impact on the game. Denis Zakaria dropped in at centre back while usual pairing Alassane Pléa and Marcus Thuram started up front. Leipzig played in their often seen 4-2-3-1 formation, with some variability between a single pivot and a double pivot depending on the positioning of Tyler Adams and Konrad Laimer. 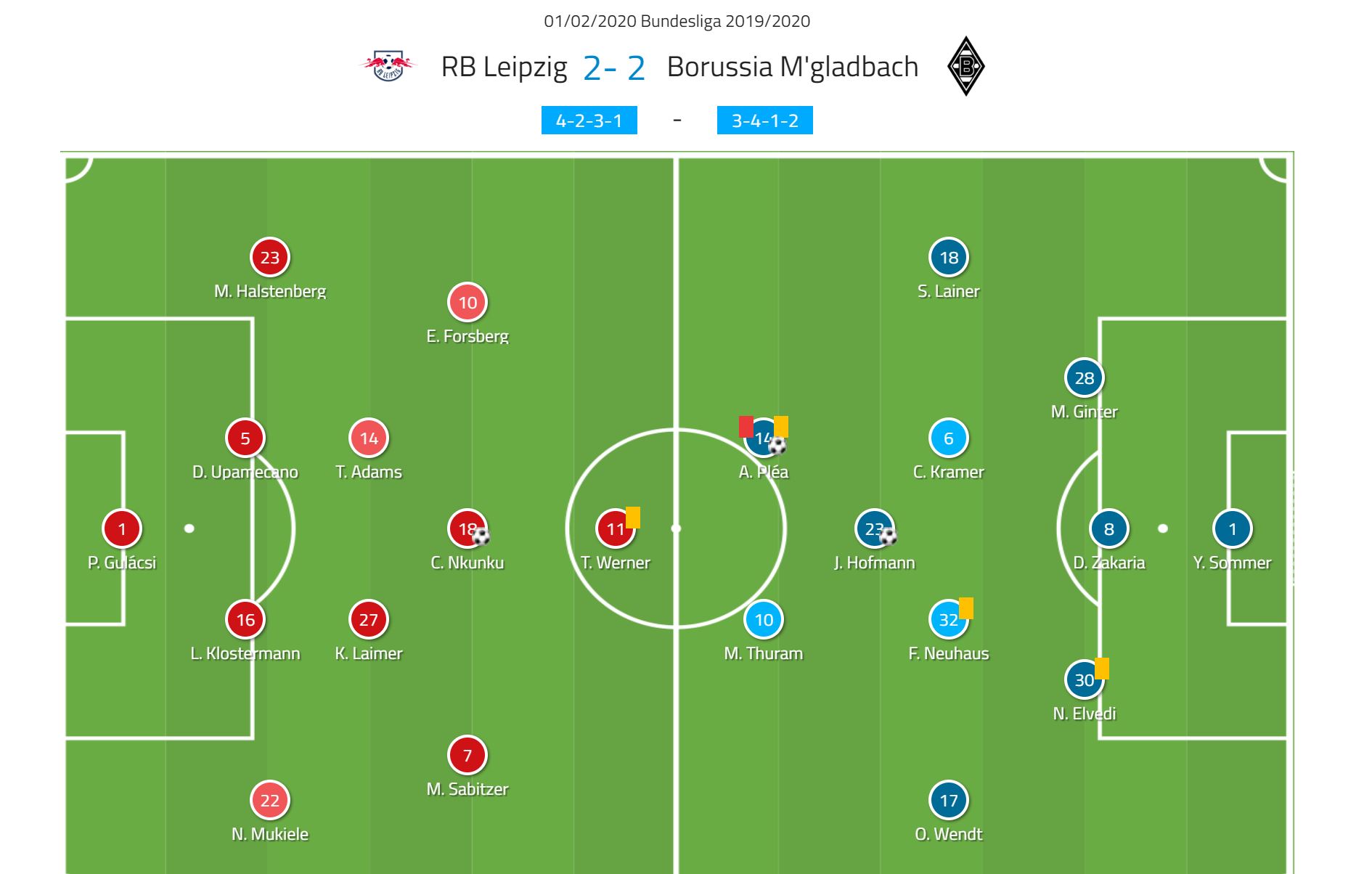 Gladbach’s not so surprising surprise?

The key tactical point from this whole game was the effect Gladbach’s ‘surprise’ had on Leipzig’s press. Below we can see an image highlighting roughly what Leipzig would have been expecting, with Borussia Monchengladbach in a diamond. If Gladbach had gone for a 4-2-3-1 the principles would have been the same with regards to the first line of the press.

In the set-up below, Leipzig would be in a fairly good pressing structure, with Timo Werner covering the two centre backs in the middle, and the wide players in the 4-2-3-1 covering the full-backs. With this setup, Leipzig have enough coverage of the back line to prevent much ball progression. 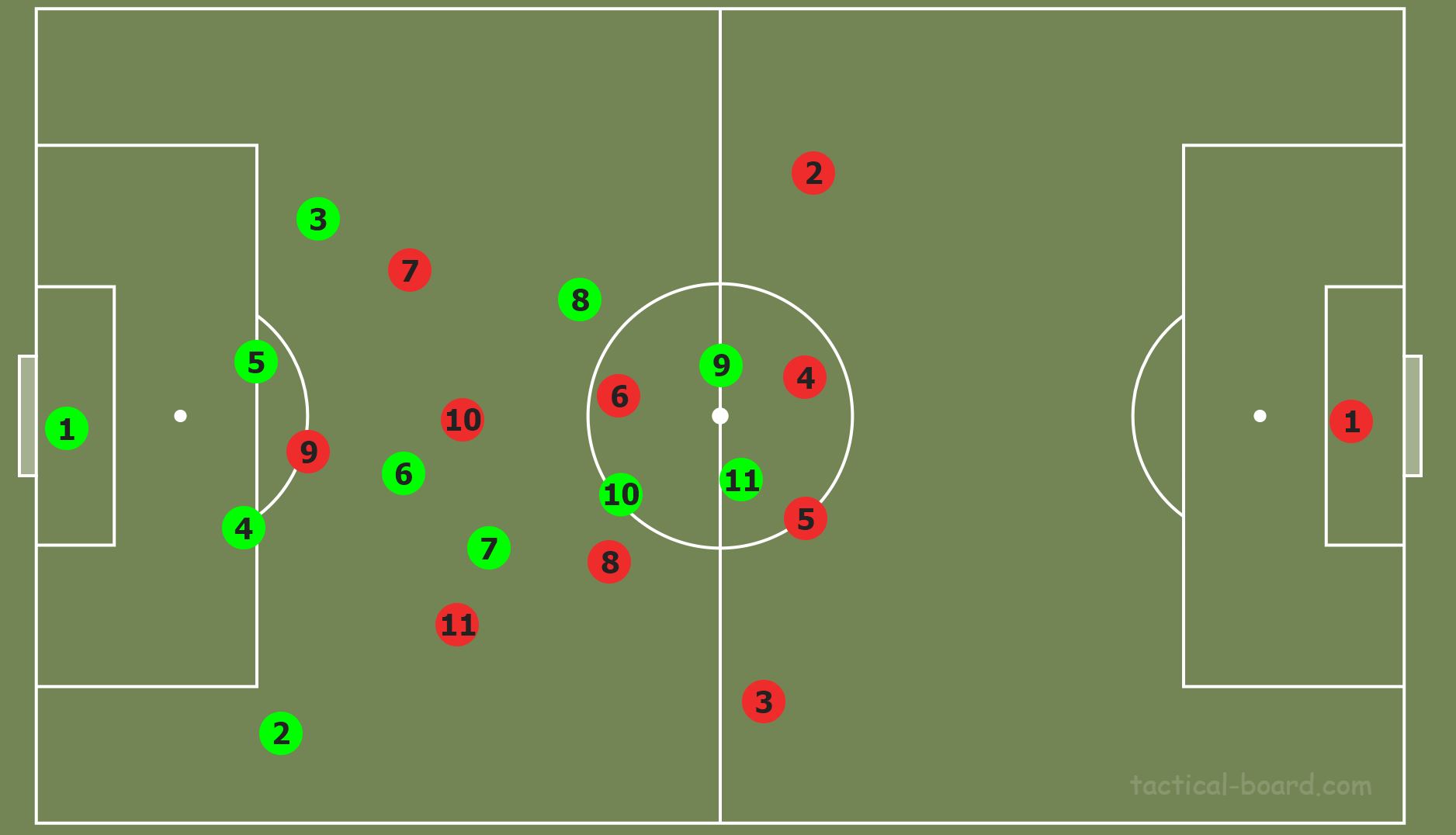 In two of their last three Bundesliga games, Gladbach have had issues like this, including in their game against Hertha Berlin which I completed an analysis of. We can see here Hertha are able to press effectively in a 4-4-2, which is similar to a 4-2-3-1 depending on the position of the ten.

Similarly, in two of their last three Bundesliga games Gladbach have also offered the same solution, which was to go to a back three to improve ball progression. In formations with two or less players occupying the first line of the press, a three at the back formation can naturally stretch that first line and force wingers to press the back line, as centre backs can push wider. Within a back four formation, centre backs obviously have to stay closer together in possession, as if they both split too wide, passes between them are easier to intercept and are too long and take too much time to reach the receiver.

Therefore, if wingers have to press the wide centre backs, then suddenly the pressing side has to commit full-backs forward to press the opposition wing-backs. We can see an example of Gladbach in their back three in a deeper area here against Schalke, but the same principles apply. The widest player Suat Serdar is now tasked with pressing the wide centre back, which leaves more space for wing-back Stefan Lainer.

Therefore, the main takeaway from this section is that I was a little shocked Leipzig weren’t prepared for this, and as I’ll show in the next section, obviously suffered.

As a result of this back three formation, Gladbach were able to consistently perform the same build-up pattern and progress the ball up the pitch. We can see the beginning of this build-up pattern below, with Gladbach’s back three stretching the first line of the press and forcing the wide players within Leipzig’s 4-2-3-1 to push high to press the wide centre backs as mentioned.

The wing-backs were able to find space to receive the ball, under some pressure but not intense pressure form the Leipzig full-backs, and the central areas were often vacated due to the movement of the Gladbach central midfielders, as we can see below.

We can see this pattern here, with the passing lane opened up due to the positioning of Neuhaus. Oscar Wendt is able to play the ball through the passing lane into the strikers and attacking midfielder, who from there can play vertically to progress the ball higher. 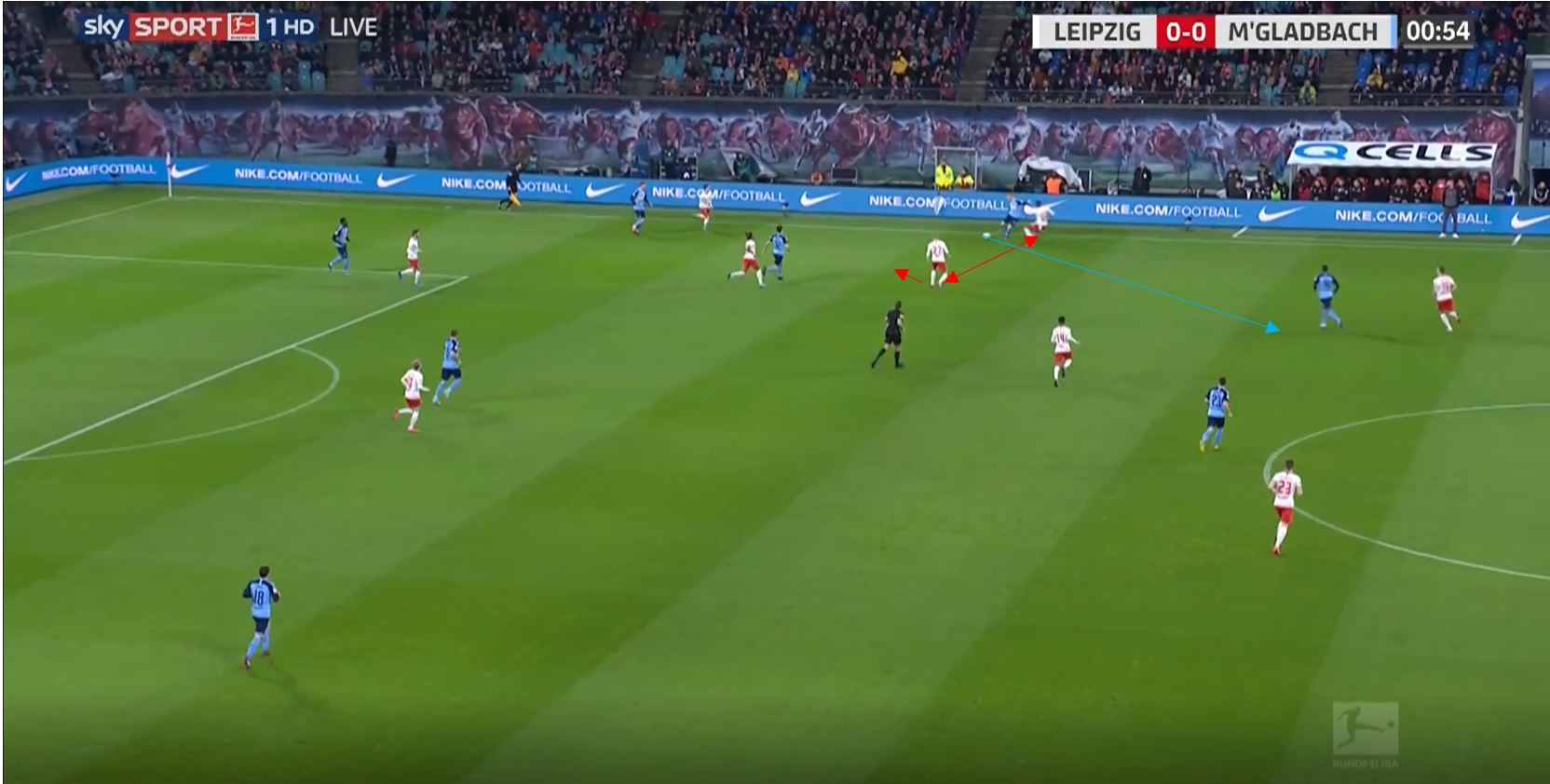 This pattern happened several times throuhgout the game, and we can see it here in the build-up to the goal, where Lainer again is able to get the ball through the passing lane between the full-back and central midfielder, where Gladbach combine through some great, efficient combinations to score. 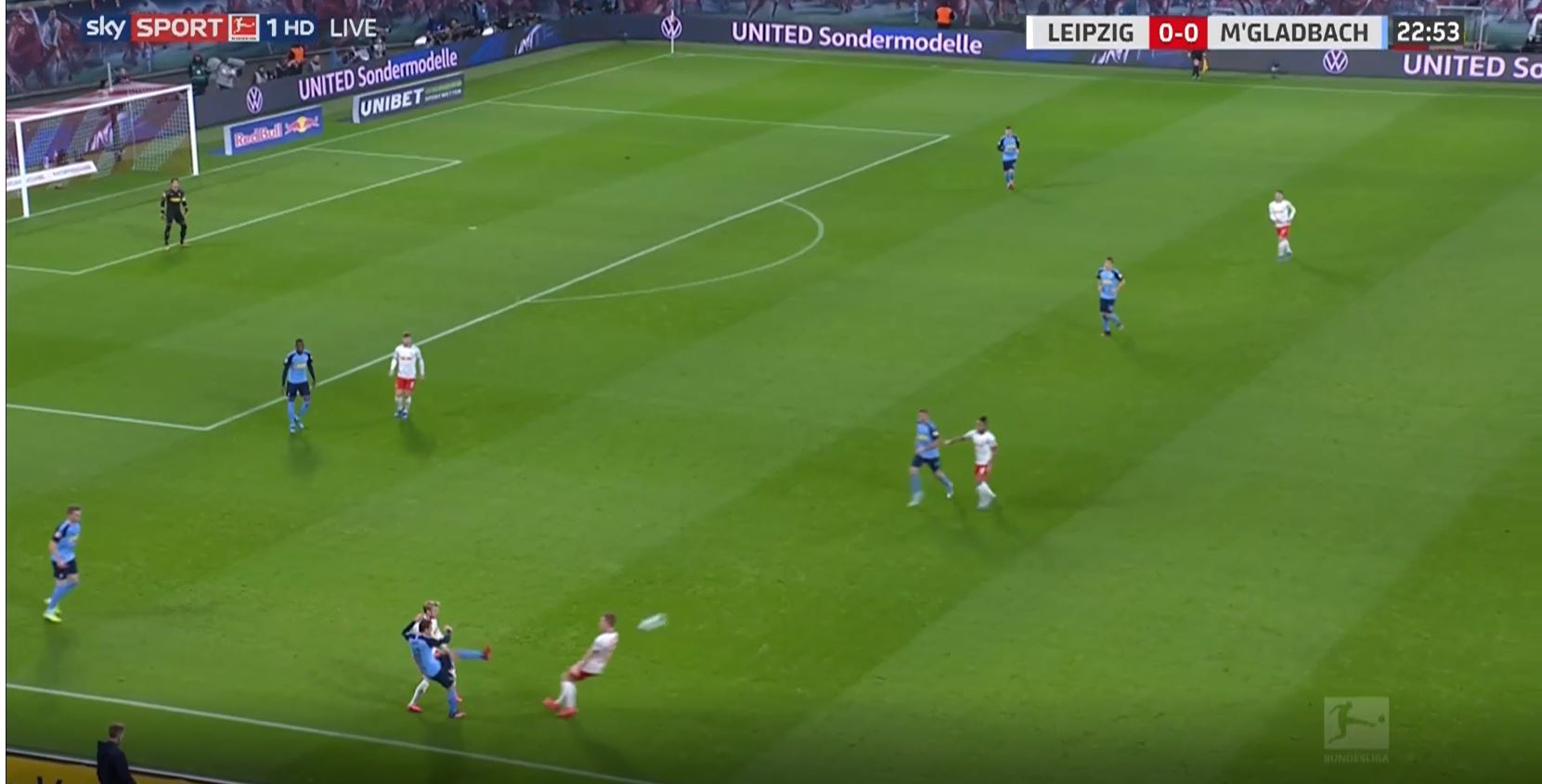 Vertical football from both sides

Both sides played fairly vertical football with differing quality. Gladbach as usual were excellent at it, and as we can see from the examples below were able to create goalscoring opportunities. Here, we follow on from the previous image, in the build-up to the first goal, and we can see a third man play from Gladbach, with Hofmann providing horizontal support for Thuram, who can continue running forward to provide vertical support. Vertical football is as much about invasion than anything else, and is effectively just getting as far with the ball as you can through short combinations and support around the ball, and then knowing when to offload the ball to prevent losing possession.

We can see again here, there is support from behind and Thuram simply lays the ball and turns, to receive the ball through on goal. Upamecano, however, does excellently to recover and catch up to Thuram and make a potentially goal-saving challenge.

If we contrast this to Leipzig’s earlier attempts we can see some issues. Timo Werner lays the ball off and has some support from behind at maybe not the optimal angle but nevertheless at a decent one. Long passing, due to its slow nature, can often hinder vertical play, and so while there is a difficult option in behind, Leipzig do have the opportunity to go short into a central area and then find Timo Werner. However no players make the correct movements to do so, namely the central player, and as a result, a long ball is played unsuccessfully.

Gladbach’s press also played a large role in their excellent first-half performance and their control of RB Leipzig. As I’ll be writing about shortly in a piece, one of the advantages of a back three formation is that more players can be committed forward, and Gladbach certainly used this to their advantage, as we can see below. Central midfielders would stay tight to opposite midfielders, and press aggressively from behind.

We can see a similar set up here from Gladbach, with the passing lane to the furthest pivot being cut by the number ten, with a pressing striker also keeping the other pivot in his cover shadow, with this pivot also about to be pressed from behind should he receive the ball. The wing-backs cover the full-backs.

We can see this tight press again here from the midfield, with this time Gladbach relying on the back press from Stefan Lainer to recover the ball. However, Leipzig’s midfield options are still under pressure.

Jonas Hofmann, who isn’t a regular starter for Gladbach, was excellent and his anticipation out of possession allowed him to recover the ball several times and the build attacks. We can see this anticpation highlighted below, with the pass across field only just being played and Hofmann already sprinting to win the ball, which due to his good speed he is able to do.

Again here, in a deeper area in the latter phase of the game, Hofmann again is aware and anticipates the pass across, and again starts his sprint in plenty of time to nick the ball before it reaches its intended target.

Following the referee’s decision to send Alassane Pléa off for dissent, the game turned on its head, with Gladbach forced to no longer press and therefore drop deeper, as this chart shows below. 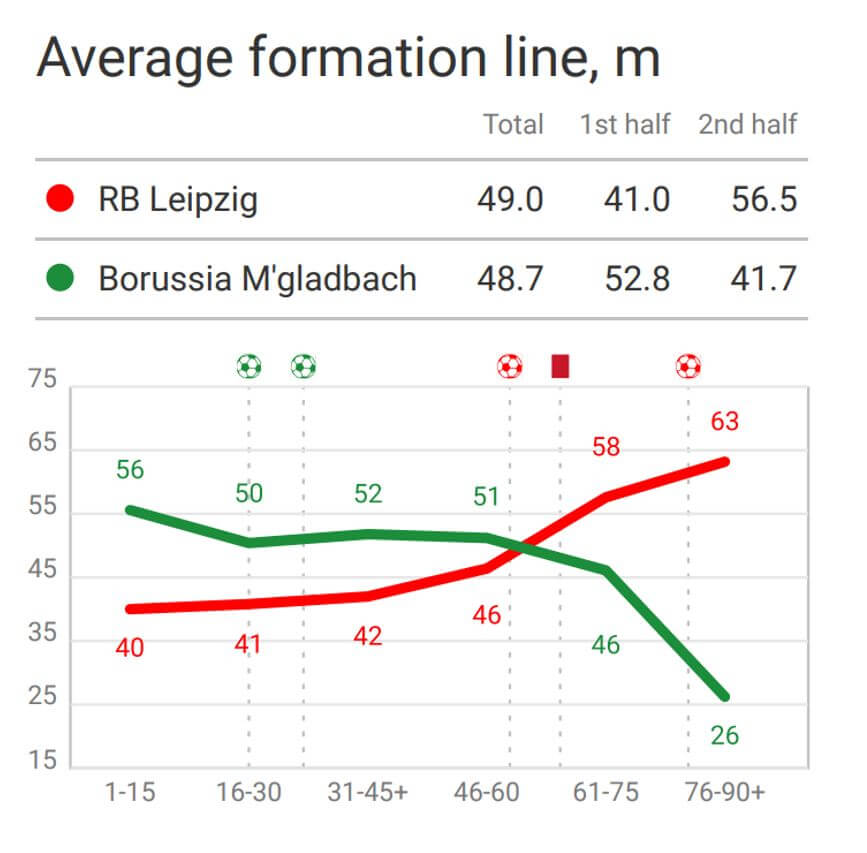 Gladbach dropped to a 5-3-1, while Leipzig moved to a 2-4-4, which became even a 2-2-6 depending on the positions of the payers occupying the conventional full-back area.

The key for Leipzig was stretching the now midfield three of Gladbach, as this would allow for spaces in the half-space for the wide players to play into. Wide players could go 1v1 against the full-backs easily, but the number of bodies Gladbach could get into the box made it difficult for Leipzig to score. We can see the space below that Leipzig could look to create by stretching Gladbach.

Leipzig initially had some issues getting the ball inside, with this one of a few examples of poor space occupation by Leipzig, with Dani Olmo here running into the cover shadow of the defender, and not making a realistic run in behind.

However, with all the late pressure, Gladbach got deeper and deeper, and Leipzig’s spatial awareness improved, with Omo here receiving an excellent pass from Werner, before being fouled. Leipzig then subsequently score a few seconds after the shot from the free-kick has been blocked away.

The game was nearly an excellent tactical show from Gladbach until the sending off turned the game on its head, and into a pretty feisty game. Rose won’t have been able to fault his team’s performance very much at all, and quite honestly it was quite a poor showing from Nagelsmann’s Leipzig and had it not been for the sending off I’m almost sure Gladbach would have taken all three points.