While the leagues are still suspended indefinitely, the players’ contracts keep running and, as every year, some are gradually coming to an end toward June 30. Despite sometimes hefty commissions, free transfers still offer a comparatively inexpensive alternative to the overheated transfer market. Juventus, in particular, have regularly taken advantage of this in the past and become the kings of the Bosman deal. Doing business this way is a no-brainer if you can do it.

In this recruitment analysis, we will take a closer look at some players in the Bundesliga with expiring contracts other teams should think about. Additionally, this analysis will also briefly point out the strengths and capabilities of these players.

Why free transfers are more important than ever

“There is great uncertainty among all clubs. This summer will be unfunny …” This statement from Dortmund`s sporting director Michael Zorc pretty much sums up the situation in professional football right now, not only in Germany. Many pundits predict drastic changes in the transfer market and decreasing market values. What makes the situation so difficult: Due to the coronavirus, nobody knows if, how and when the leagues can finish their seasons. The uncertainty within football is understandable considering the mindboggling amount of €770 million of TV money that is at stake in Germany for instance.

And if wealthy clubs like Borussia Dortmund feel that way: how do smaller clubs like Mainz or Freiburg have to feel, not to mention clubs in the lower leagues? For the vast majority of clubs, their most important concern in the near future will be to survive and secure their existence. Hence, clubs won’t spend a lot of money in the transfer market, which brings us to the importance of free transfers. Yes, you still have to pay a (high) salary and probably also a significant commission, but, nevertheless, it might be a relatively cheap option in these times.

By the time I write this article, there are currently 73 players on an expiring contract in the Bundesliga. Unsurprisingly, many players are already at an advanced age (average: 28.51) as we can see in the graph below. 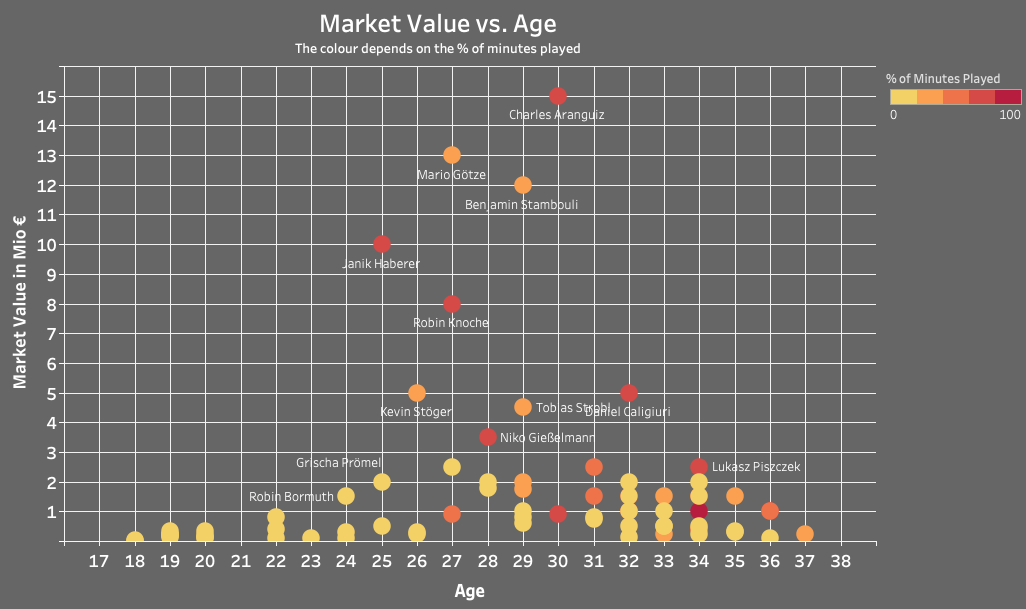 But what else does the graph show us? First of all, there are no promising talents that have played serious amounts of minutes or have a high market value. Moreover, we can spot a few players who should be at their peak – at least in terms of their age – such as Robin Knoche or Kevin Stöger.

In general, not many players have a red bubble, signalling that most of them were not significantly valuable to their teams this season. However, it is also important to note that a lot of these players had to deal with major injury problems. Kevin Stöger, for instance, missed the first half of the season due to a torn ACL while Benjamin Stambouli is out since October due to a broken foot.

Based on this graph, some statistics and especially based on the eye test, I selected three players that are the most promising in my opinion. Considering the limited amount of valuable players, the selection process was not supposed to be too hard. So without further ado, let’s take a look at the players.

Last weekend, German newspaper Bild titled: “The chance of Aránguiz saying Yes (to a new contract) is better than ever.” The 30-year-old was acquired by Leverkusen in 2015 for €13 million from Internacional and quickly established himself as a regular starter. The Chilean international has everything that you expect from a central midfielder, combining playmaking with ball-winning abilities.

Aránguiz’s biggest strength is his diverse passing and his comfort on the ball. Although he also likes to join the attack around Kai Havertz & co., Aránguiz is more in charge of initiating the build-up and secure the balance between defence and offence. Once he receives the ball in front of Leverkusen’s defence, he always tries to progress the ball forward averaging six passes into the final third per 90. In these situations, Aránguiz does not shy away from risk and especially likes to play flat balls into the interfaces of the opponent through the centre. 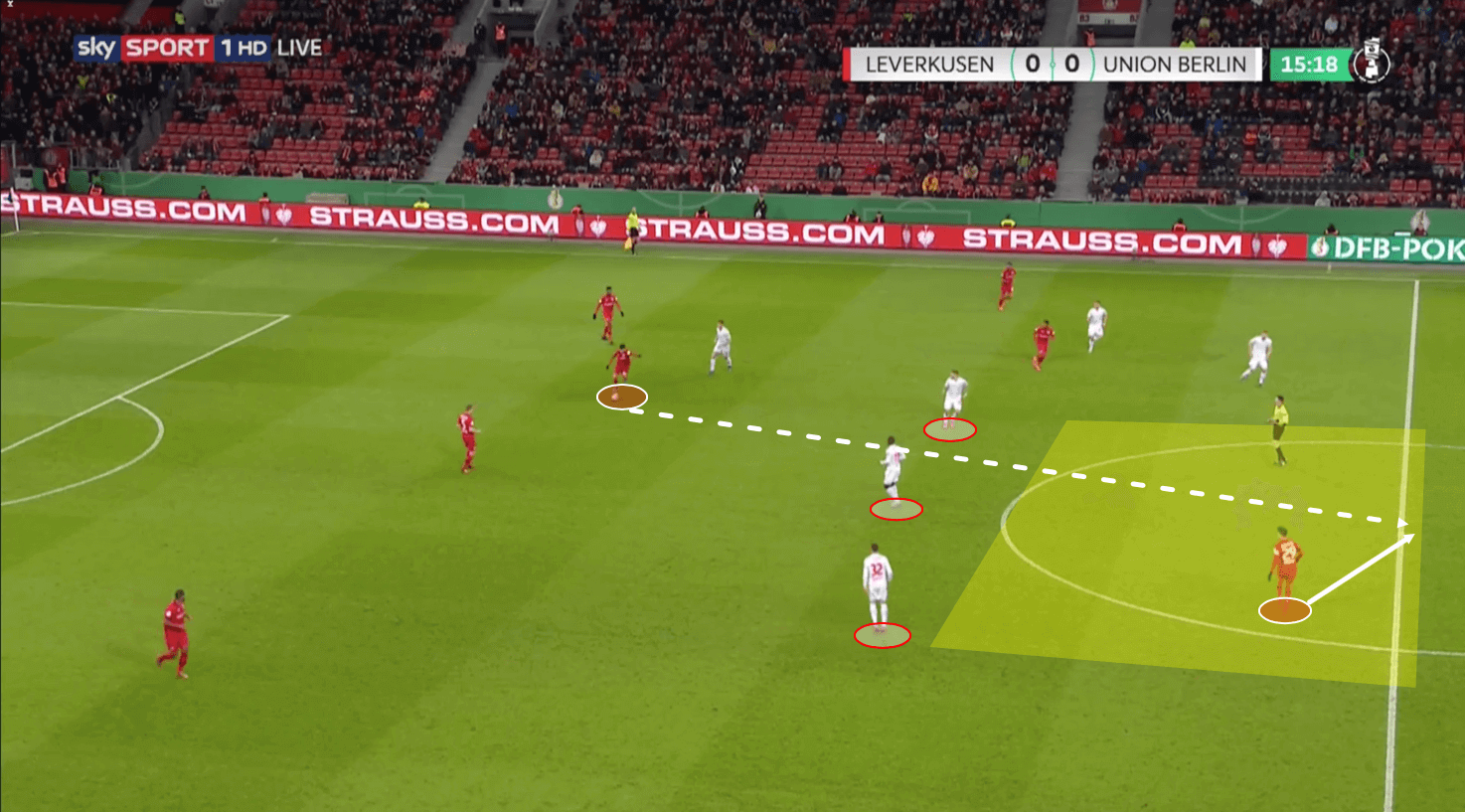 He himself is always ready to receive the ball and pass it on with only one touch. As already indicated and despite his rather defensively oriented position, the Chilean has never lost his offensive drive and still likes to join the attack. The example below illustrates both his ability to instantly pass the ball forward as well as his ability to discover spaces and support the attack. 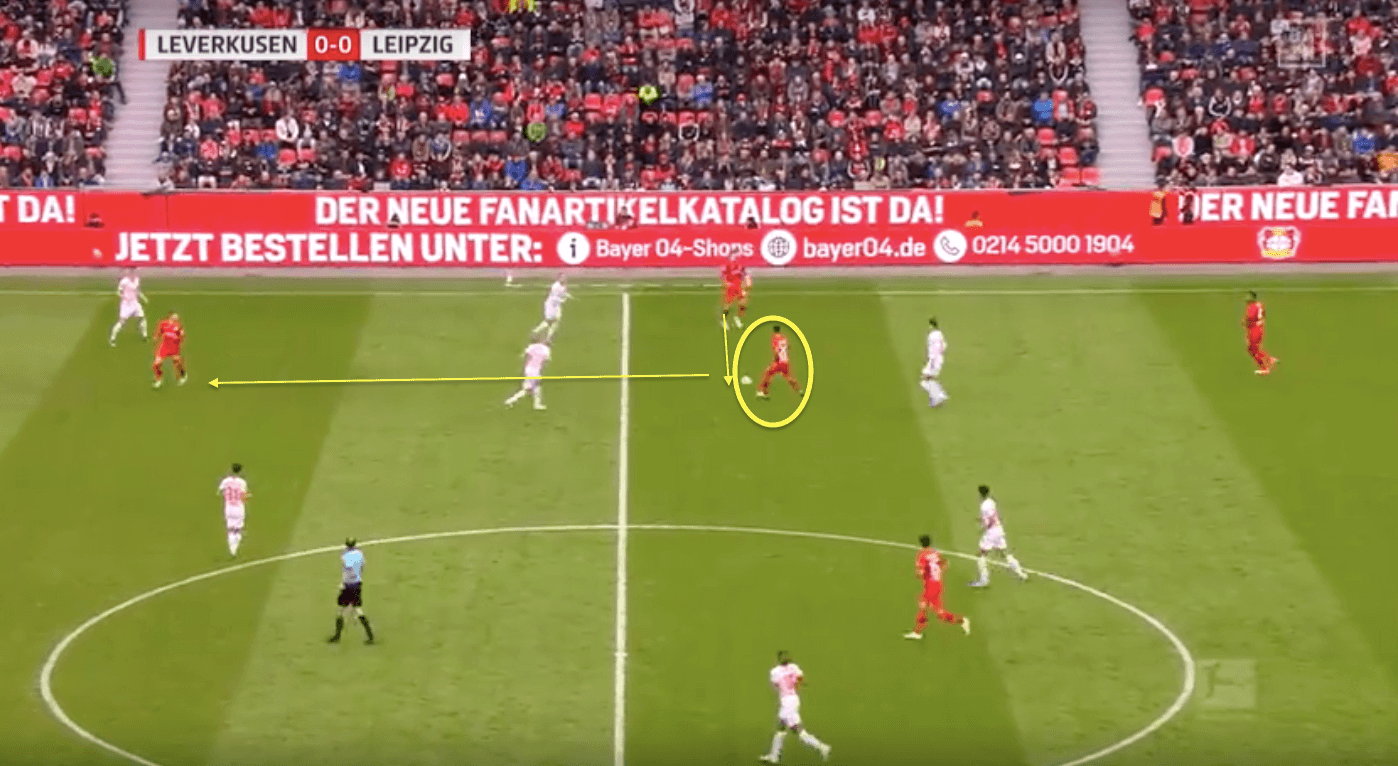 Having played the ball, he doesn’t switch off but made a progressive run as he has realized the open space that occurred. He eventually managed to evade his opponent and provided the assist for Leverkusen’s lead. 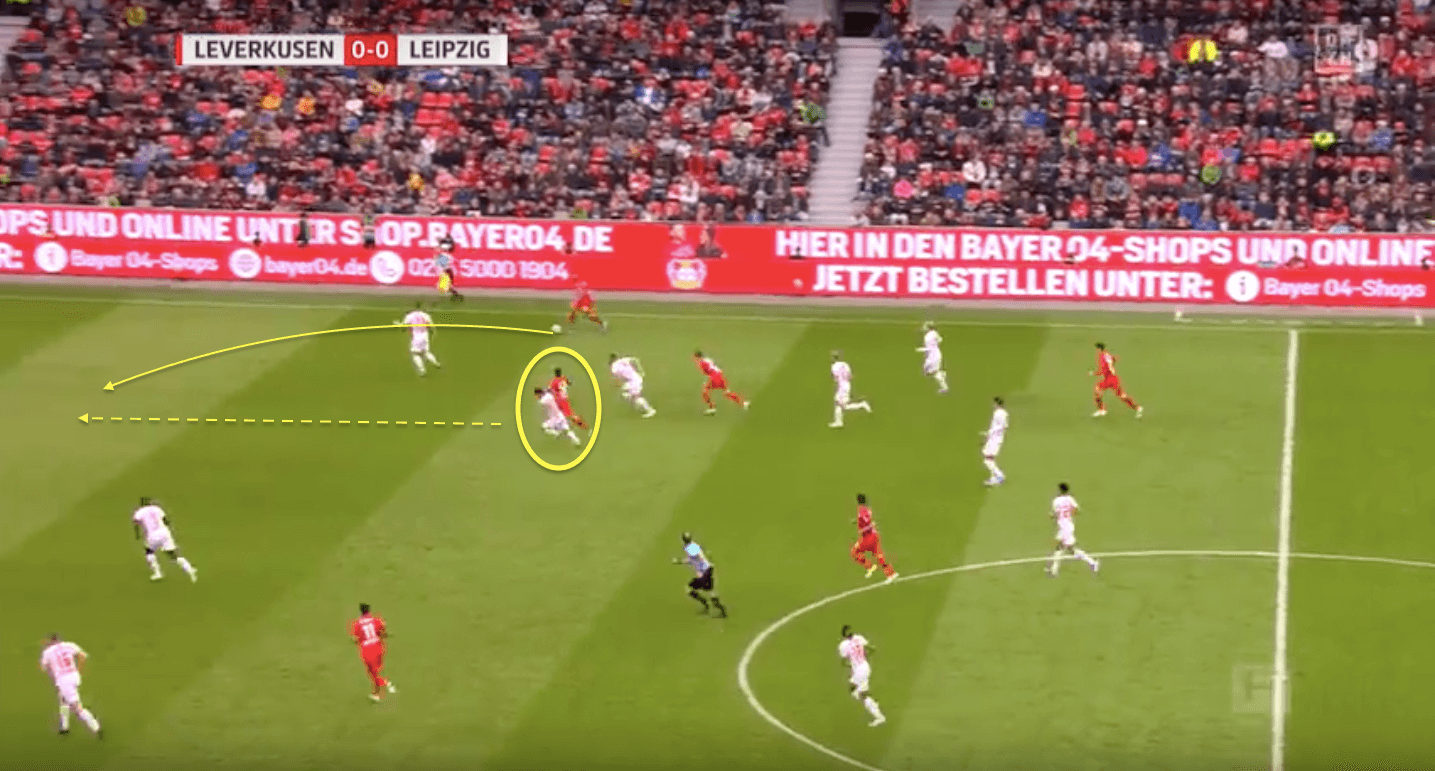 While we focused a lot on his impact with the ball, his defensive abilities must not be underestimated. Notwithstanding his size of just 1.71 m, the Chilean knows how to compete against physically stronger opponents. However, despite all the praise, we also have to mention that almost all of his numbers are slightly down – although they are still very good! – compared to last year, which might suggest that a certain decline is in evidence.

Janik Haberer is the youngest player on our list, who has a significant market value. The 25-years-old can be described as an all-around midfielder, however, often not really perceived and appreciated. I think, the main reason for Haberer being so frequently under the radar might be that he doesn’t have any special abilities that really stand out, even though he is still an overall good player.

The first “problem” starts when trying to define his position. He is a very versatile and dynamic midfielder, who can play practically all midfield roles and on the right wing as well. One could also say, he is Freiburg coach Christian Streich’s all-purpose weapon. The role that suits him best is probably as an advanced midfielder, where he can act as a free-flowing box-to-box midfielder combining his defensive and offensive abilities most effectively.

But what are his abilities actually? The first thing that comes to my mind, when talking about Haberer, is his insane work rate. He rarely appears on the match report for goals and assists but does so many things beyond that, that are not captured by any statistics. It’s especially his off the ball movement that cannot be stressed enough. He has a great vision and knows how to create space for himself or his teammates.

In the situation below, Haberer moved higher up the pitch to offer a progressive passing lane between the opponent’s central midfielders. Due to his movement, Freiburg were able to create numerical superiority in the centre and effectively progress the ball. 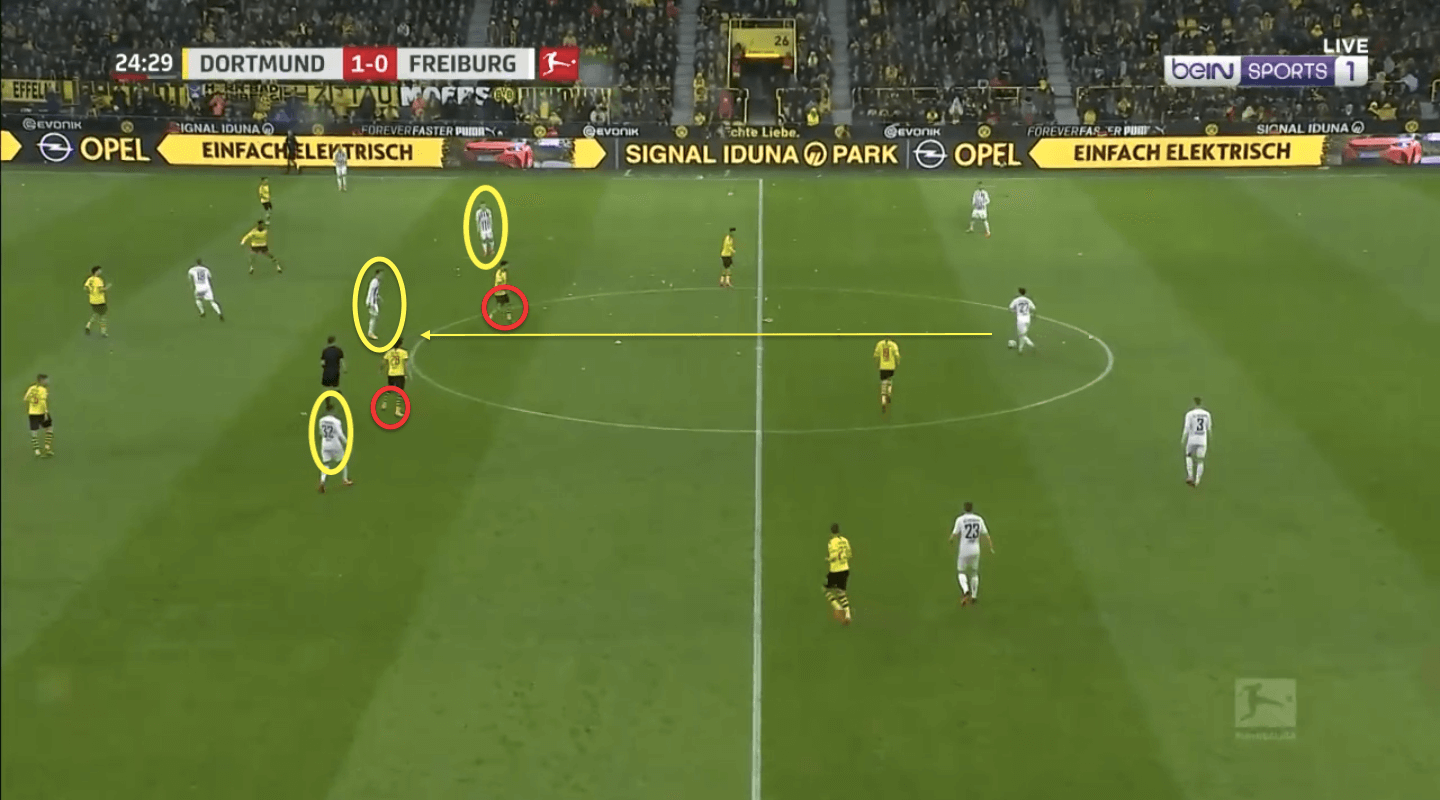 I wouldn’t consider it as one of his strengths, but Haberer also tries to take over responsibility in the build-up when played as a central midfielder. Especially when opponents are sitting a bit deeper, Haberer likes to drop deep to have the pitch in front of him. While he mostly opts in for the short pass to a teammate in those situations, he recently also tried to play through balls more frequently as shown below. 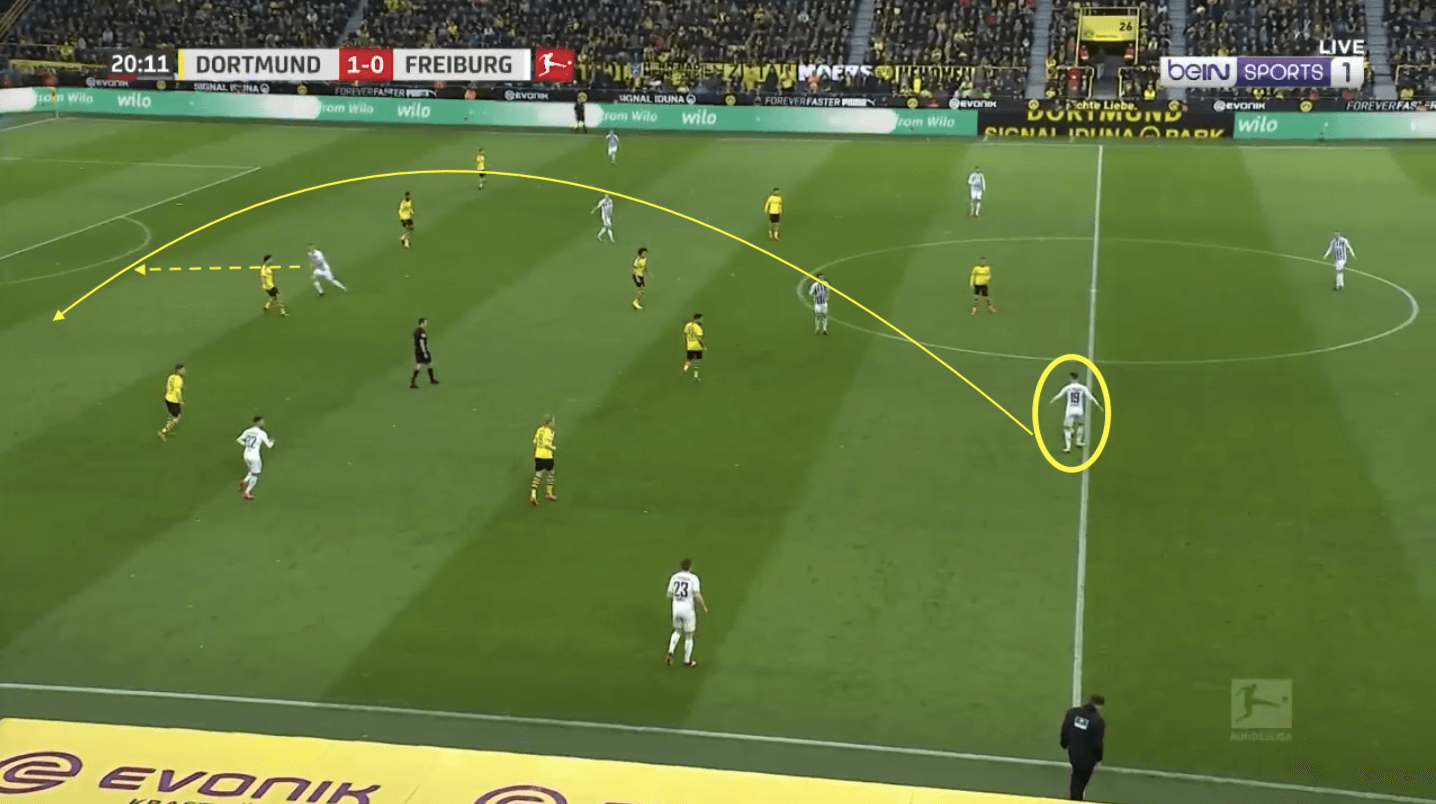 Furthermore, thanks to his versatility, Christian Streich played him as a right winger in almost half the games. As indicated, Haberer is a very intelligent player and capable of playing this position. It allows him to make more deep runs behind the opponent’s defence. 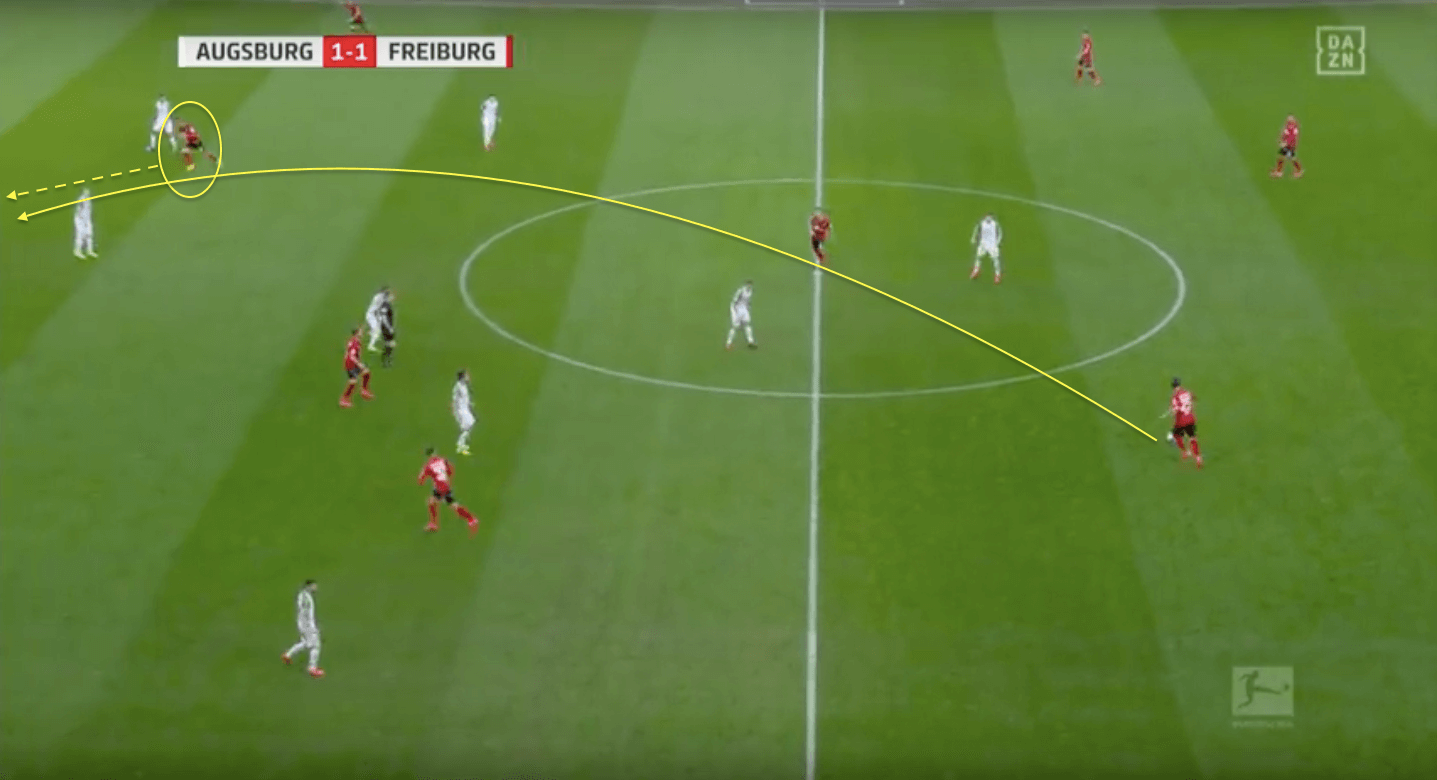 That being said, an area he has to improve is his attacking output. Over the last two seasons, he only amassed three goals and five assists – very modest figures for an offensive-minded midfielder. Despite this, Haberer offers a lot to every team. He is a very smart player with an insane work rate, who can play almost every position – a very valuable attribute.

For all those who do not regularly and intensively deal with German football, Kevin Stöger might be the great unknown. It’s just the second season in the Bundesliga for the Austrian international who moved from VfL Bochum to Düsseldorf in 2018. In Uwe Rösler’s 3-5-2 system, Stöger usually plays as one of the advanced central midfielders in a midfield trio after he missed the first half of the season due to a torn ACL.

Similar to Aránguiz, Stöger likes to drop deeper to support and initiate the build-up. He is capable of both building up with a short pass, overplaying the first pressing line of the opponent as well as the long ball aimed at the flanks or the wingers who made runs behind the defence. The example below illustrates his accurate long balls leading to the first goal against Hertha BSC.

Thanks to this kind of passes, Stöger already amassed three assists in just eight matches this season. Furthermore, the Austrian is also confident in narrower zones further up the field and capable of playing the final pass. The next sequence shows another situation, where he reacted very quickly after winning the ball and immediately played a through ball to the winger, who found himself in a 1 vs 1 situation with the keeper.

Perhaps it’s time to bring up some numbers to further underline his offensive contribution: He completes almost six passes into the final third per 90 and assists two chances per 90. In addition, he averages 0.17 Expected Goals Assisted per 90, which is a good number for a central midfielder. These numbers are not on the same level as they were last year, but especially when considering his long absence, it is quite remarkable how well he has reintegrated himself into Düsseldorf’s team already.

Two parts of his game where improvements could be made: First, Stöger frequently takes long-range shots averaging more than one shot per 90 over the last two years but consistently fails to score. While this one can be considered as a minor one, the second point, his defensive contribution is more significant. Since he was originally an attacking midfielder, the Austrian partly still has problems to keep up in defensive duels. That said, the impact of this weakness is significantly minimized as long as he has players with complementary attributes next to him.

To put it in a nutshell, Kevin Stöger is a very underrated player, even in Germany. It’s fair to say that he is Düsseldorf’s most important player and that they will do everything to keep him. However, based on his development over the last two years as well as his peak age right now, it’s very likely that Stöger aims for a bigger move to a club competing for Europe.

As this recruitment analysis has shown, there are still some promising players that clubs should have on their radar for next summer. It was a coincidence that all players discussed are central midfielders. Apart from these players, there are still other interesting names, such as Benjamin Stambouli or Mario Götze, who is still a very intelligent footballer. Even though it’s an extraordinarily difficult time right now and nobody really knows what’s next, everyone has to be prepared not only for the remainder of the season but also for the next season. It can be expected that as soon as it is ensured that the leagues can be continued, the planning for the next season and thus the signings of players with expiring contracts will pick up speed.