Dejan Ljubicic appeared several times in the media in Austria this season, though not only because of his performances on the pitch. Everybody knew that he would join the MLS club Chicago Fire in this year’s January window and he even left the training camp of Rapid Vienna to meet with officials of Chicago Fire to finalise the deal.

Meanwhile, Rapid Vienna even signed Dejan Petrovič to replace Ljubičić. However, in the end, Ljubičić didn’t move to the MLS and stayed in the Austrian Bundesliga. Ever since the winter transfer window and these rather unusual events were over, the 22-year-old defensive midfielder hasn’t played a single second due to injuries.

Still, we will look in this tactical analysis in the form of a scout report at the qualities and abilities of Ljubičić and why he is an important player for Rapid Vienna.

The Hütteldorfer are clearly the third-best team behind RB Salzburg and LASK Linz this season. They’ve switched mainly between a 4-2-3-1 and a 3-5-2 formation, and Ljubičić was always one of the defensive midfielders in his 13 appearances for the club and really important for the build-up.

In the periods of possession of his team, he mainly stayed deep in front of the defenders to support them during the circulation of the ball during the first stage of the build-up as we can see below.

When Kühbauer’s squad used a system with a back three, the wing-backs are already positioned pretty high during the early stages of the build-up. This is especially the case with Maximilian Ullmann who is arguably, besides Andreas Ulmer of RB Salzburg, the best left-back of Austria’s top-flight is mostly positioned quite high up the pitch.

Due to this, Ljubičić drops in these moments deeper on the left side to support his three teammates at the back. The main reason for this is that even though the Austrian midfielder has the abilities on the ball to deal with pressure as we will see in the next section of this tactical analysis, he still prefers to have more time on the ball. And this is the case when he drops deeper as he did in the example below as their opponents used a high pressing and he would have had almost no time and space in the central area in front of the back three in this sequence. 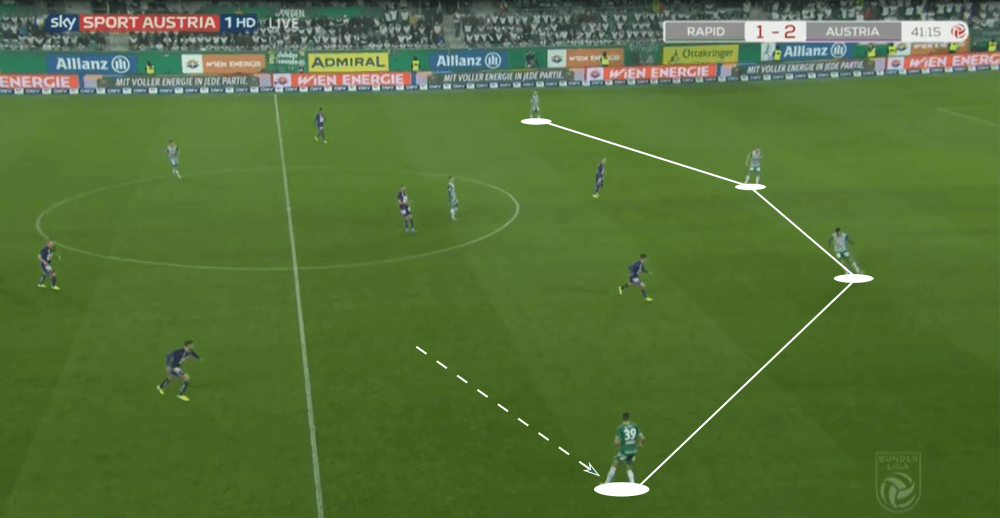 Ljubičić’s understanding of the game and vision doesn’t just help him during the early stages of the build-up and the deeper areas respectively, as he also pushes forward when the opportunity occurs. In these moments he tries to find free spaces to open up passing lanes and receives the ball. As the 22-year-old midfielder is clearly not a player with an outstanding acceleration or incredible pace, he needs to use his mental abilities to always be one step ahead as he did in the example below in which he perfectly runs forward in the free space to receive the ball after a nice little combination on the left side. 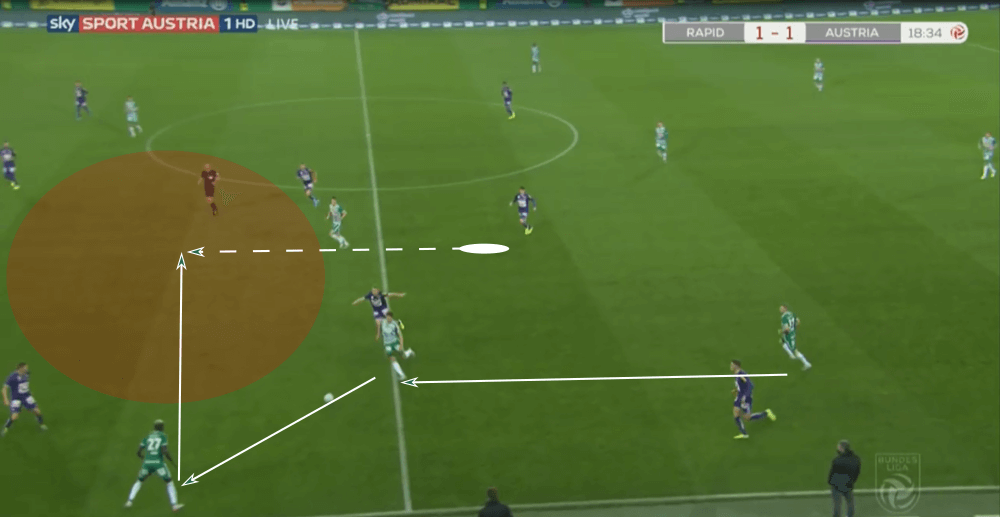 His importance during the periods of possession

As we saw in the first part of this analysis, the 22-year-old is quite important for Rapid Vienna’s tactics in possession and we will look at this more detailed in this part of the scout report.

Ljubičić plays on average 47.08 passes per 90 minutes which is the third-highest value of all players of Kühbauer’s squad as only the captain Stefan Schwab and the centre-back Mateo Barać have a higher number of passes per game. This statistic already tells us that he is one of the players who are responsible for the organisation of the build-up.

Besides, he has behind him central defender Christopher Dibon, the second-highest success rate for passes of all Hütteldorfer with 86.8%. This value tells us how strong Ljubičić is on the ball and that he can deal with pressure from the opponents as we can see in the shot below. 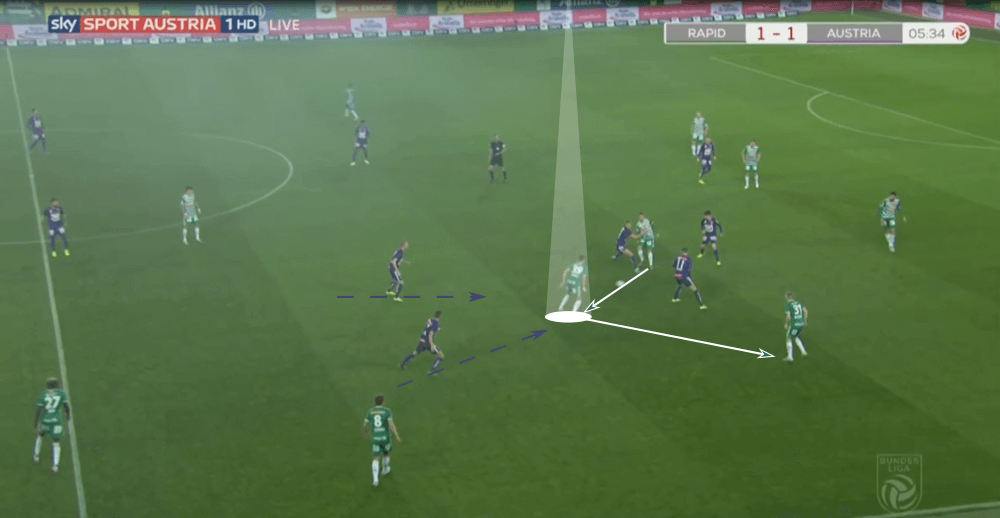 One additional aspect of Rapid Vienna’s build-up which shows us that the Austrian defensive midfielder is a good passer of the ball is the fact that his teammates permanently try to pass the ball to him as they know that he is the one who dictates the build-up.

He is also one of the players in Kühbauer’s team who is responsible in deciding when they continue to just circulate the ball in their own third and when they try to progress the ball further up the pitch. The young Austrian always looks if there is an option to get the ball forward first when he receives the ball and makes a forward pass if there is a good option available as we can see in the image below. 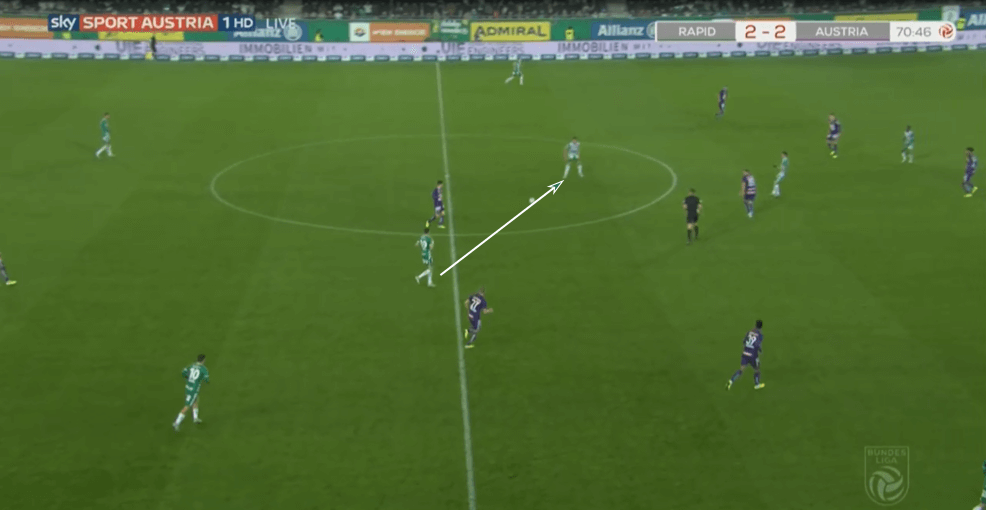 Ljubičić plays on average 16.62 forward passes with a success rate of 75.5% and 7.46 passes to the final third, of which 79.4% find a teammate (all values per 90 minutes). The high success rates for these kinds of vertical passes tell us two things as firstly, he is a great passer of the ball and secondly, he just goes for the vertical ball if there is a safe and good option available.

It’s quite impressive to see that a 22-year-old takes on the responsibility of the build-up of his team and acts like he would have done this for his whole life. The Austrian midfielder doesn’t hesitate to go for the long ball if there is a good option and whenever this is a way to overcome the press of the opposition.

He plays on average 2.77 long balls per match which is not an incredibly high value. But when he plays long balls, they are mostly well-planned ones as he wants to bring one of his teammates in a good position as we can see in the shot below.

As already mentioned earlier in this tactical analysis, Ljubičić doesn’t just stay deep during the attacks of Rapid Vienna, but also pushes forward to support his teammates in the higher lines. We can rarely see him really entering the penalty box as he stays a bit deeper out of two reasons. First of all, when he stays out of the opposition’s block, he has more time when he receives a ball and additionally, he is in a good position to win the second ball and start the counter-pressing respectively.

In the situation below, he won the second ball just moments ago to then play perfect and simple through pass. 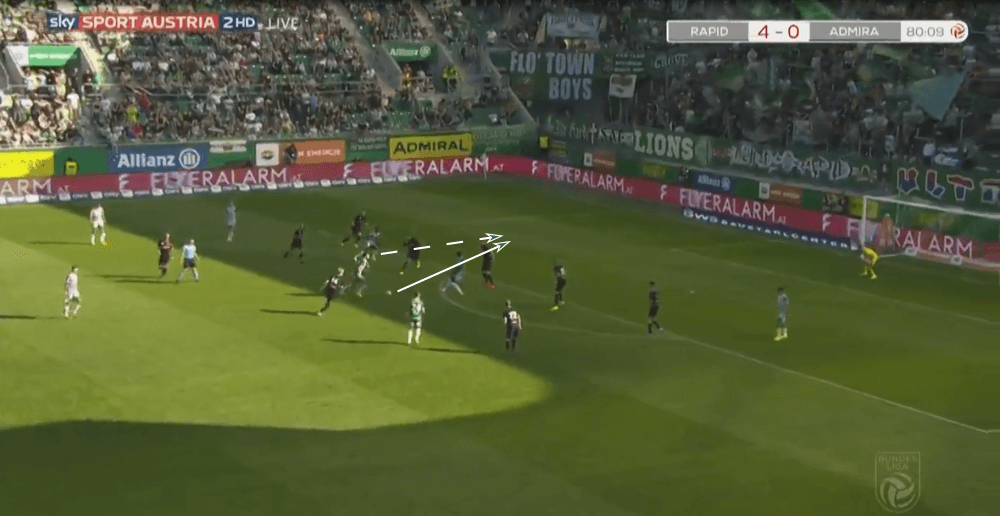 The fact that he plays just 0.31 through passes per game already shows that he rarely finds himself in a situation like the one above. Still, I want to use a situation in a higher area ahead of one of his two goals in this season to talk about his technical abilities as we already looked at his passing.

Basically, Ljubičić’s abilities to dribble are quite good and his first touch especially is often quite impressive as he scans the field before he receives the pass to then get into a free space. The situation below is a perfect example. Look at his body orientation before he receives the ball as he already knows that he wants to enter the free space next to him which he already detected.

After two good touches, he’s in a good position to shoot and scores with a decent goal, but the main reason for this was how he found the free area in front of the penalty box and how he made use of it. 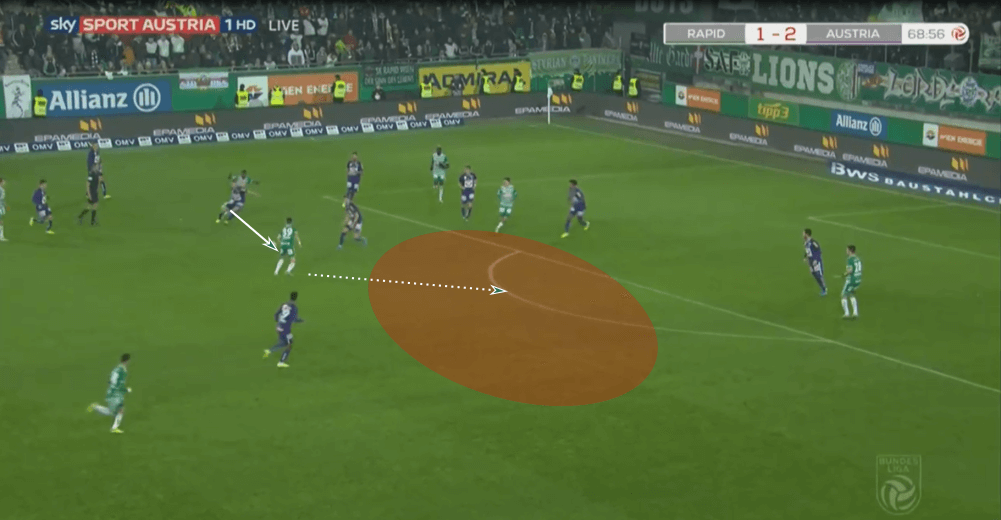 However, even though he has a solid technique, he dribbles just 2.77 times per game with a great success rate of 66.7%. The main reason for that low number of dribbles but solid success rate is once again that he just dribbles when it makes sense and he has a good chance to get forward with it. In general, the Austrian knows that he is better in passing than in dribbling and due to that he always looks at first for a good passing option.

When the opposition is able to cut off all passing lanes as Austria Vienna did in the situation below, Ljubičić finds himself in a situation which he doesn’t like due to his lack of speed and acceleration. He isn’t outstanding slow, but he is not fast enough to always get away from his opponent like in the situation below where he loses the ball to Dominik Fitz. 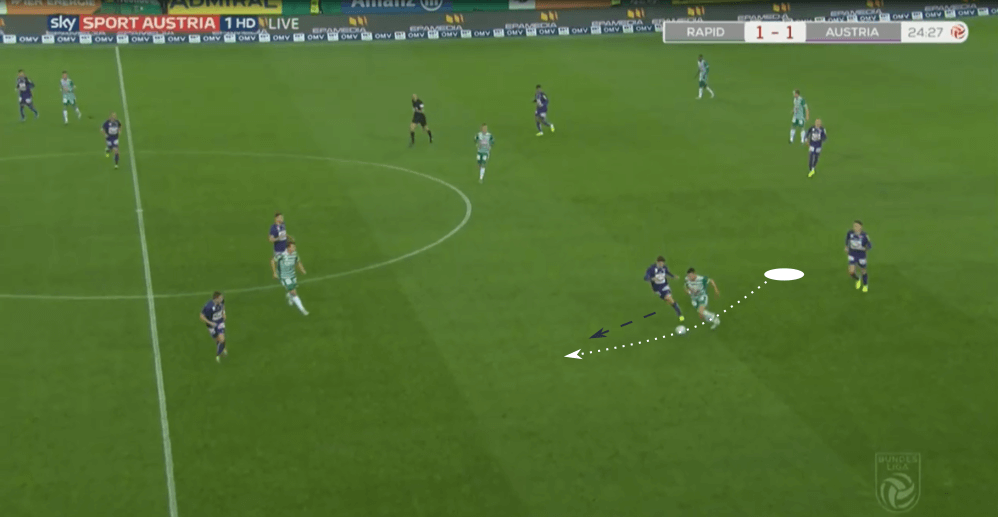 In the final part of this tactical analysis in the form of a scout report, we’ll take a short look at his abilities and qualities in his work against the ball. First of all, you can say that Ljubičić is a typical all-rounder in the defensive midfield as he is important for Rapid Vienna’s tactics in possession but is also defensively strong.

We already saw in this analysis that the Austrian has a great understanding of the game and that helps him not just during the periods of Rapid Vienna’s build-ups and attacks, but also in the moments when they want to win back the ball. Especially when it comes to interceptions, Ljubičić does quite well with 5.15 per game. In these moments like the one below, he can exploit his vision and the ability to read the game. In this example, he detects the run of his opponent to then put his body between the ball and Austria Vienna’s player to intercept the pass and win it back for his team.

All in all, the Austrian midfielder makes 11 recoveries per game which is a good value, but not outstanding. He also wins 55.4% of his 8.62 defensive duels per game which is again a solid value. However, we can clearly see that his qualities during the build-up are bigger than is defensive ones which are also solid.

35% of his recoveries are made in the opposition’s half which shows that he has no fear to push forward and put pressure on the opponents also higher up the pitch as we can see in the situation below. 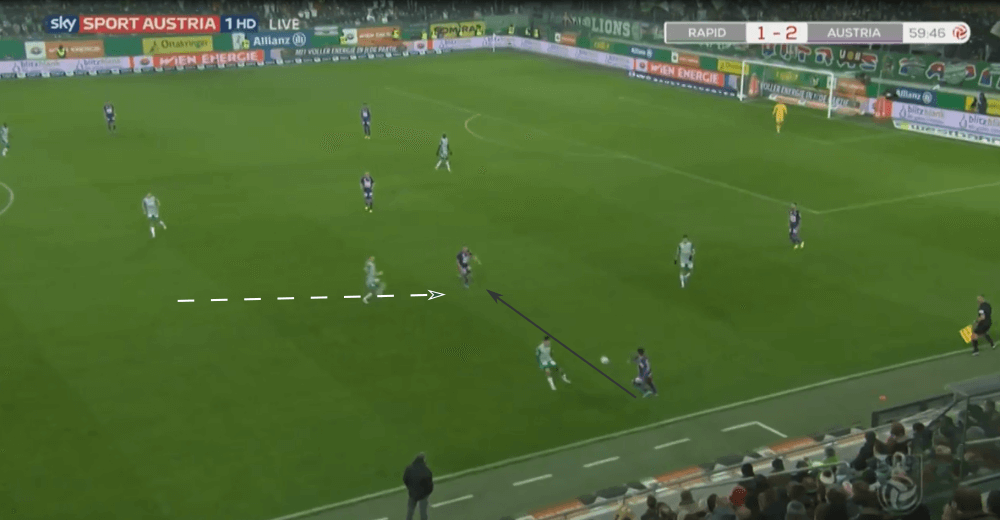 The 22-year-old defensive midfielder is quite thin but stands at 6’2” which gives him the necessary height to be strong in the air. He is on average involved in 3.08 aerial duels while his success rate is nothing incredible with 37.5%. Still, he often cleverly joins his teammates in their own penalty box when the opposition attack over the flanks to have one more body in the centre for the defending of crosses. 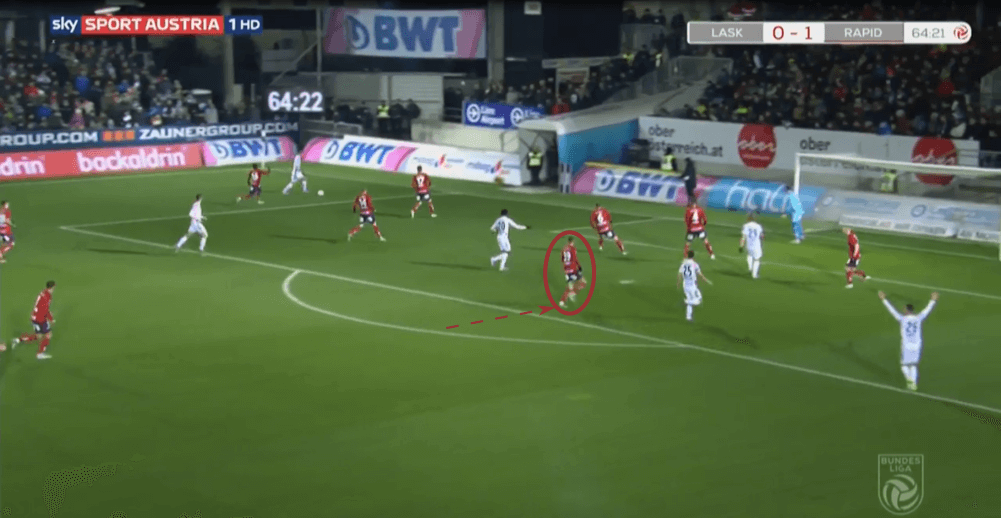 To put it in a nutshell, Ljubičić is extremely strong and calm for a player at his age, especially when it comes to organising the build-up and progressing the ball, which can resemble Frenkie de Jong of Barcelona sometimes, who is also 22 years old but of course, does the same on a higher level. Still, both are solid in the work against the ball but have their strengths when they have the ball at their feet. In any case, De Jong is a much better dribbler compared to Ljubičić.

However, in these situations, the 22-year-old Austrian has to work on his dribble abilities as he needs to learn to solve situations under pressure also this way. Besides that, I think that he will leave Rapid Vienna sooner or later as he wanted to already do so already in this winter transfer window.