Borussia Dortmund: Has their tactical approach matured under Lucien Favre?

Borussia Dortmund had a flying start to the season. The new manager Lucien Favre has established his football vision and managed to create a well balanced team with a great style of play. A mix of experience and rough talent has been the perfect solution to their Bundesliga struggles. Despite some of them being quite risky, making a few transfer moves made the difference and improved their squad immensely.

After the 25th round, both teams are level on points with goal difference keeping them apart. They have won only one game in their last eight fixtures in all competitions, including getting knocked out of the DFB-Pokal and the Champions League round of 16. The Black and Yellows’ only chance to win a trophy is under threat and despite the undeniably talented squad, there is still a lot to be worked on.

Their struggles in turning the huge amount of created chances into goals might be central to their downfall, despite having the likes of Marco Reus, Mario Goetze, Paco Alcacer and former Manchester City youngster Jadon Sancho in front of goal. The team is producing a fairly high amount of shots per game with half of them being on target, but yet a lack of good finishing has been the main reason for them being knocked out of the cup competitions.

But what went wrong, and will this turn of events actually help Lucien Favre’s side take some rest and focus on the Bundesliga challenge?

The Swiss coach took over in the summer and transformed Borussia into an unstoppable goal-scoring machine. Lucien Favre’s approach to the transfer market boosted the squad’s quality noticeably and turned it into a confident, well balanced title contender. Not only did the team receive additional firepower up front, but the defenisve line was reinforced too.

Dortmund have scored in 23 out of 25 games in the championship this campaign but only kept seven clean sheets. The Black and Yellows average 12.84 shots per 90 minutes with 43.9% of them being on target. It results in them scoring 2.44 goals on average per Bundesliga match.

Favre’s tactics of building attacks patiently and relying on a clinical finish have worked wonders. This has been a result of his consistency when it comes to team and formation selections. Half of the teams’ goals have come in the last 30 minutes of the games which is part of the Swiss’ strategy to control the game and then attack from deep or counter-attack.

Their overall pass accuracy rate is 87.6% which is actually another result of the intelligent moves on the transfer market. Let’s see why.

The new manager addressed the team’s weaknesses. One of the best decisions he made was bringing Belgium international Axel Witsel on board. His impact on the team’s performance has been extremely noticeable as he owns the central areas. Witsel has been responsible for providing support to the back four but also for being a creative force during build-up phases.

His passing accuracy rate has been impressive, averaging 72.8 passes per 90 minutes with 95% accuracy (92% of his passes to the final third have been accurate too). This shows his importance to the team’s build-up play, but also in terms of maintaining possession in midfield. Unsurprisingly, this is Dortmund’s preferred action zone. Witsel’s support to the defensive line results in 8.9 recoveries on average.

Having Abdou Diallo and loanee Achraf Hakimi has increased Dortmund’s stability at the back. Not only do they provide the necessary defensive contribution but their connection is crucial when forming attacks.

In the image above from the draw against Hoffenheim, you can clearly see the most frequent passing links. It turns out that having Diallo at centre-back favours Hakimi’s forward runs which most of the time end with a pass to Witsel, who can then distribute the ball further more efficiently.

Keeping Hakimi might be crucial for the team’s future efforts. Averaging 4.32 interceptions and 8.48 recoveries he is extremely important for Dortmund’s defensive actions. In addition to that, his dribbling helps during transitions and are the reason for his successful runs on the flank. In the same game against Hoffenheim, for example, he managed to successfully dribble past his opponents seven times. 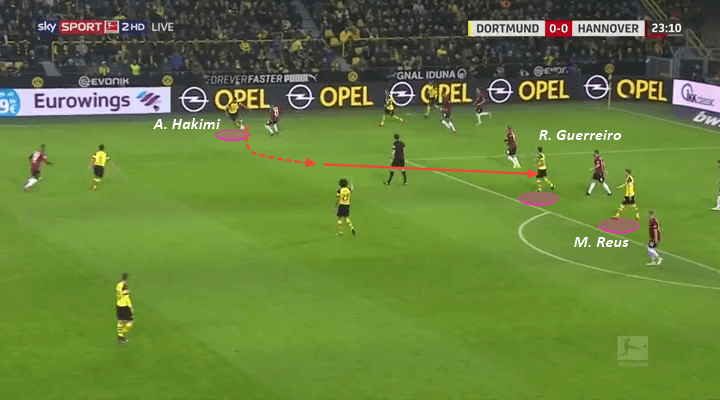 The team has the third best defensive record this season behind Bayern Munich. They have conceded 28 and 27 goals respectively, with only RB Leipzig topping their achievements allowing only 20 goals. One reason for that record is that the team presses less in the opposition’s half which allows them to structure better during defensive transitions.

He is arguably the player with the biggest impact on the team’s attacking ventures. Bearing in mind Favre mostly uses him as a force from the bench he has often turned games in Dortmund’s favour. The Spaniard has been included in the starting XI just seven times in the Bundesliga but yet somehow averages 3.3 shots per 90 minutes and has scored 14 goals.

Seven of them were scored in his first four games, and even more impressively he scored them with his only seven shots on target. They came in only 106 minutes of play which is a record for the best start in the top flight. His flair for finding gaps and moving to free himself of his markers is one of the reasons he has been so important in the final third. He sometimes drops back and provides high quality through-balls to his teammates.

He fits perfectly into Dortmund’s 4-2-3-1 formation where they use a lone striker with strong on and off the ball abilities. The player at the tip of the attack has to have great positional sense and move off the ball in order to create space for the players behind.

But they also need a player with explosiveness and good finishing waiting on the edge of the box to receive the ball on counters. Alcacer supports the team by applying high press and tends to recover the ball quite often.

The most discussed player throughout the season is the 18-year-old Jadon Sancho. He has taken the Bundesliga by a storm, scoring eight goals and providing 10 assists in his first season with the team so far. The combination of great off-the-ball movement and undeniably strong ball control have brought him under the spotlight in the blink of an eye. 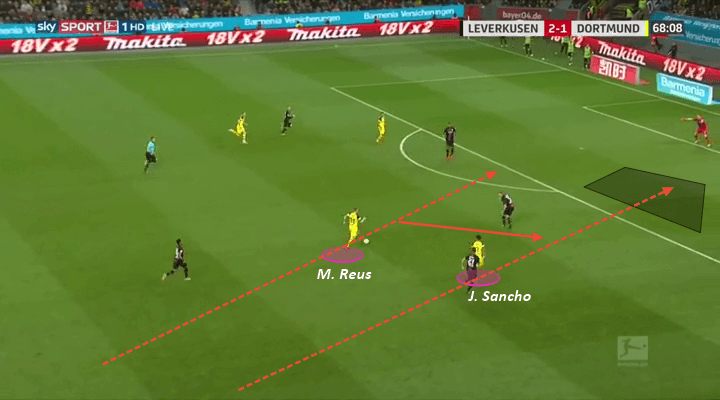 His positional versatility has been of great help to the teams’ attacking actions. His pace, dribbling and creativity have served the lone striker well, in most of the cases Marco Reus. He and Alcacer are third and fourth in the league’s leading goalscorers table.

What went wrong in the knockout competitions?

Despite creating a crazy amount of shots Dortmund struggled to find the perfect finish in the Champions League against Tottenham. They were knocked out 4-0 on aggregate largely down to their failure to convert all those chances into goals. Of course that also has to do with Hugo Lloris’ outstanding performance in both legs, and yet it is more of a Dortmund problem.

Against Spurs, they produced 25 shots (12 of them on target) and none of them ended up with a goal. This might be a result of switching between formations; the Champions League is where Favre has tried to change things up a bit. This was their main struggle against Nurnberg and Augsburg, but let’s dive a little deeper into how they were defeated by Werder Bremen in the DFB-Pokal.

There were some squad changes with the most significant one being the absence of the goalkeeper Roman Burki in favour of Eric Oelschlagel. Also, Favre made a positional rotation moving Diallo to the left of the defence in order to include Omer Toprak in central defence.

The Black and Yellows used Witsel as the main force to distribute the ball up the pitch in the areas where Reus and Christian Pulisic were positioned. Dropping back every once in a while and making a combination of short passes with the central defenders allowed the team to locate the free spaces and exploit them.

Later on, after Reus’ equaliser at the end of the first half, Favre used the right-back Hakimi as an additional attacking force to distract Werder’s defenders and open spaces for his teammates in central areas. Dortmund’s plans didn’t have the required success as Bremen’s defensive lineup managed to balance stretching out wide and still having solidity centrally.

That is actually what Werder did during their second goal. They stretched the play out wide which gave Mohwald the opportunity to exploit the half-spaces and receive the ball. After that, poor defensive actions by Witsel resulted in their opponents scoring. Other than that, a lack of awareness during set-pieces sent the game into a penalty shootout.

The title challengers need to improve their effectiveness in front of goal. Despite the crazy amount of chances they create, the attacking players must focus and work on their finishing if they want the Bundesliga crown.

The 3-1 win against VfB Stuttgart who are currently in the relegation zone might have boosted their confidence but a lot of work has to be done, especially with their upcoming meeting with Bayern Munich. On April 6 they will meet in what might turn to be the season’s decisive fixture.