Matchweek two of the Belgian Pro League saw the first Friday night kick-off of the 2020/21 season, with Royal Excel Mouscron hosting KV Mechelen. Both sides had picked up a point from their opening fixtures against what many would consider to be stronger opposition, so they came into this game with confidence.

In the end, it was a Nikolas Storm penalty, which only counted after the third attempt, following two Herve Koffi saves off his line, that proved to be the difference. This game was of interest to the neutrals, as it saw a team in Mouscron who are closely aligned to Ligue 1 side LOSC Lille, with players like Koffi and others being on loan there. KV Mechelen should be of interest to Manchester City fans as they watch their summer signing Issa Kabore in action. Home side Mouscron went with a 5-4-1 formation, with the aforementioned and impressive young goalkeeper Koffi in goal. The three centre-backs were Jean Onana, Saad Agouzoul, and Nemanja Antonov. Last season’s leading goal creator Alessandro Ciranni was at right-back, with Eric Bocat on the opposite side. In midfield, last week’s goalscorer Marko Bakic was given a start alongside Deni Hocko, with Imad Farag and Beni Badibanga on the wings. Virgiliu Postolachi was the lone striker.

For Mechelen, Gaetan Coucke was the man between the posts, while the outfield players were set up in their usual 4-3-3 formation. Rocky Bushiri and Thibault Peyre were the centre-back partnership, with Kabore on the right and Lucas Bijker on the left. Joachim van Damme was in his usual defensive midfield role, with the creative pair of Rob Schoofs and Aster Vranckx ahead of him in the middle of the park. Storm was out on the left while Geoffry Hairemans was playing wide right, with William Togui as the striker. Wouter Vrancken decided to leave last week’s goal scorers Igor de Camargo and Jordi Vanlerberghe on the bench, as he had done in the first match.

Despite being a right-back, Kabore is one of Mechelen’s biggest attacking threats, due to his crossing ability. Against Anderlecht, he was the provider for both goals, and he could have had even more assists had the finishing been better. In order to create the space for Kabore, it is the winger Hairemans who is important. Rather than playing a conventional wide role, he instead is much more of an inside forward, operating in more central areas. For example, in the image below, we see how close Hairemans is to the striker Togui. This created plenty of space on the right for Kabore. 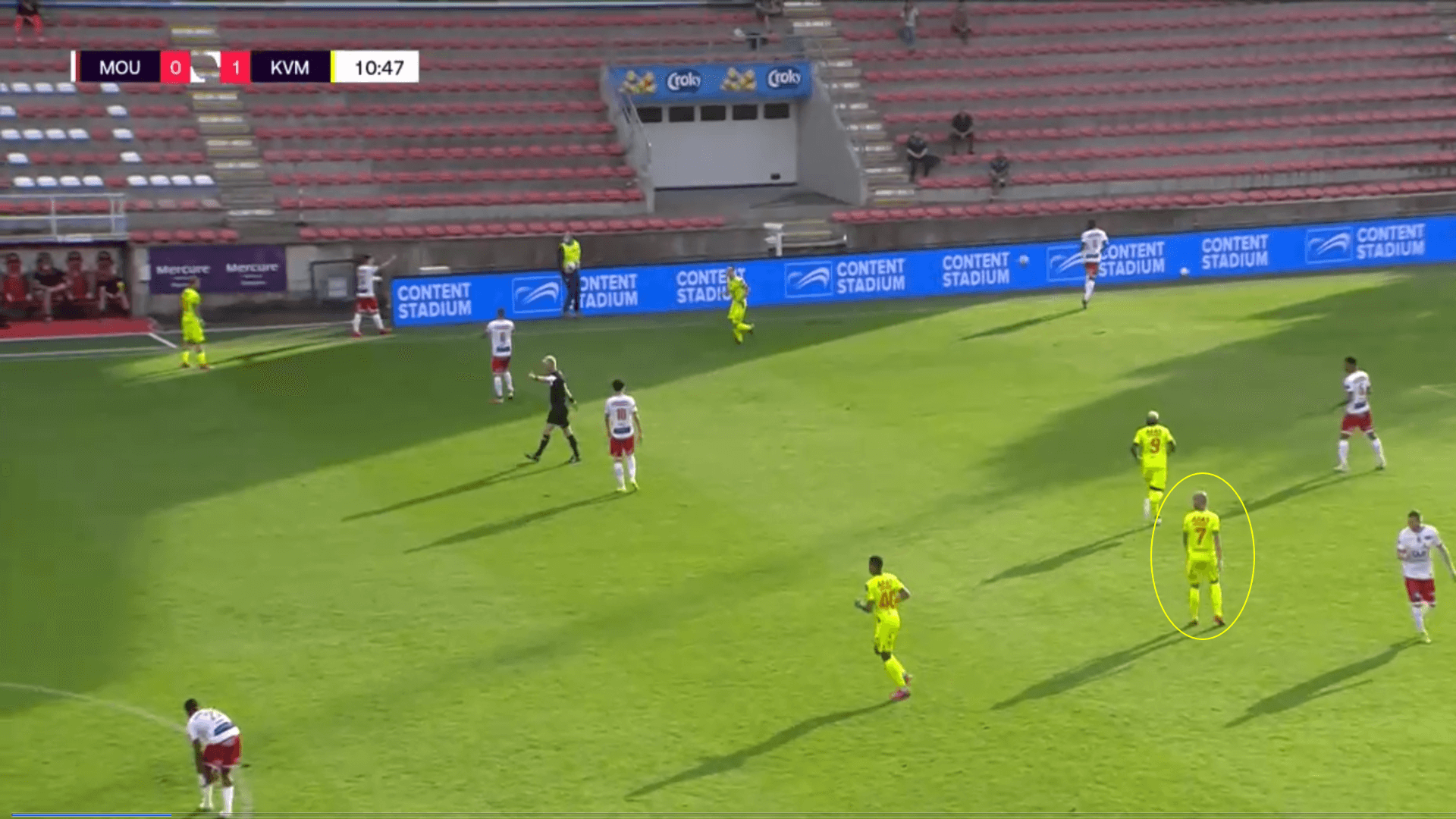 By moving so far inside, it opened up ample space for Kabore. While this did not always create many chances or even though plays still broke down, it meant that Mechelen always had Kabore as an outlet to force the home side back – especially Bocat as the left wing-back, whose job it was to track Kabore, with Hairemans occupying the centre-backs instead.

Mechelen were unlucky not to be two goals up within 23 minutes, with the space they created for Kabore leading to a goal ruled out by a marginal VAR call. Here we see number seven Hairemans is in the centre of the pitch when the cross is put in, with Kabore just off picture below in plenty of space. 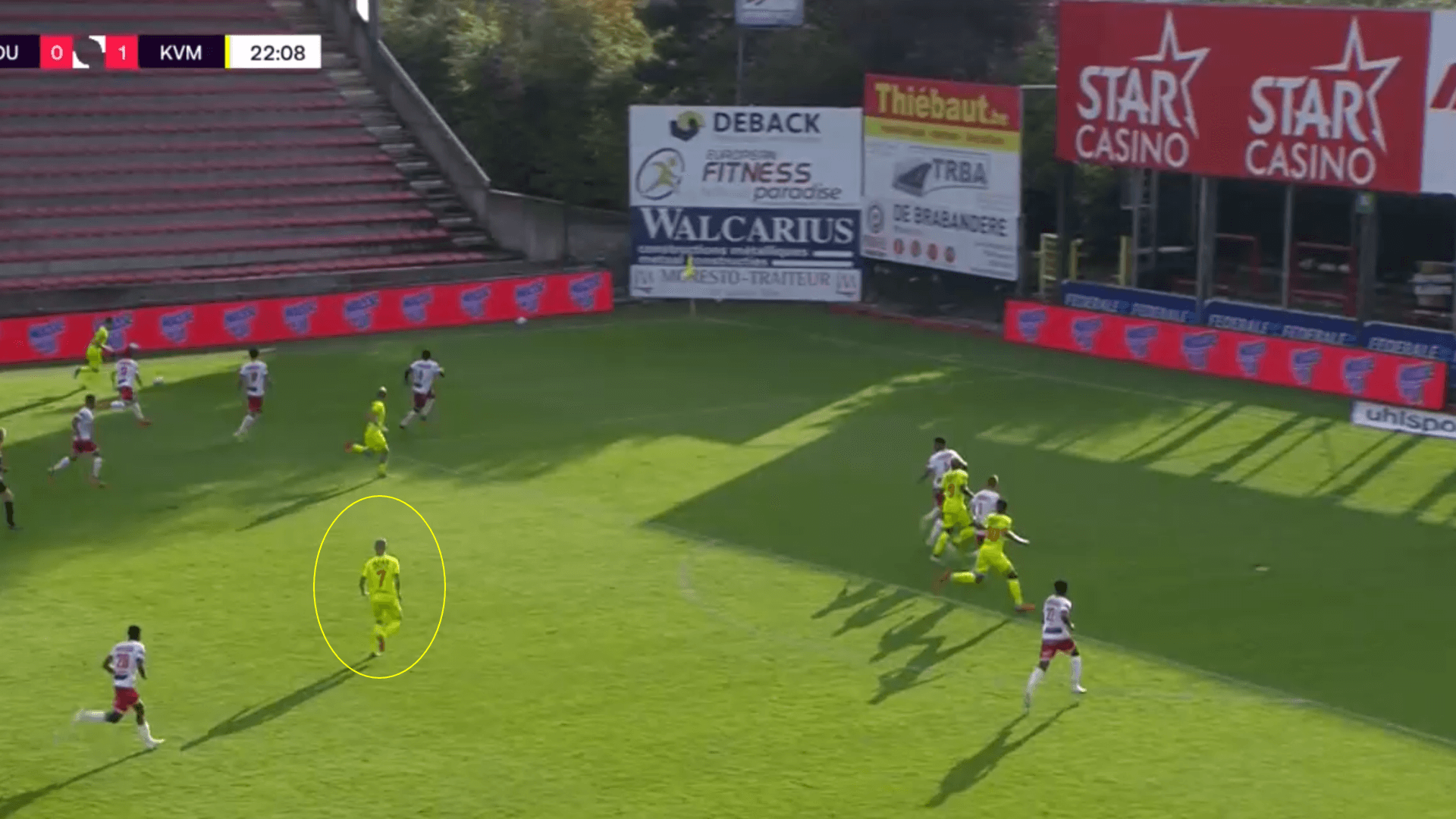 As the ball comes into Togui, we see the result of the inside forward being so central. It has forced Mouscron into a narrow defensive formation and given Kabore the freedom of the right-hand side. They recycle the ball well, in order to find the young full-back. By the time he finally gets the ball, they have then stretched Mouscron the other way and created space in what was a crowded penalty box. Kabore’s cross to the back post is inch-perfect for Togui to put away before it was ruled out for VAR. This sort of play is a constant feature of Mechelen’s tactical approach as a team, and Kabore as a prospect should really excite fans of Manchester City. Early in the game, the home side struggled in transitioning the ball from the back to the midfielders. This was because of the Mechelen defensive set-up. Tactically, they looked to push Vranckx on to block passes from the Mouscron defenders. This image from the 11th minute was common, with one of the three Mouscron centre-backs trying to force a pass into the midfield area, which was either intercepted or off target. 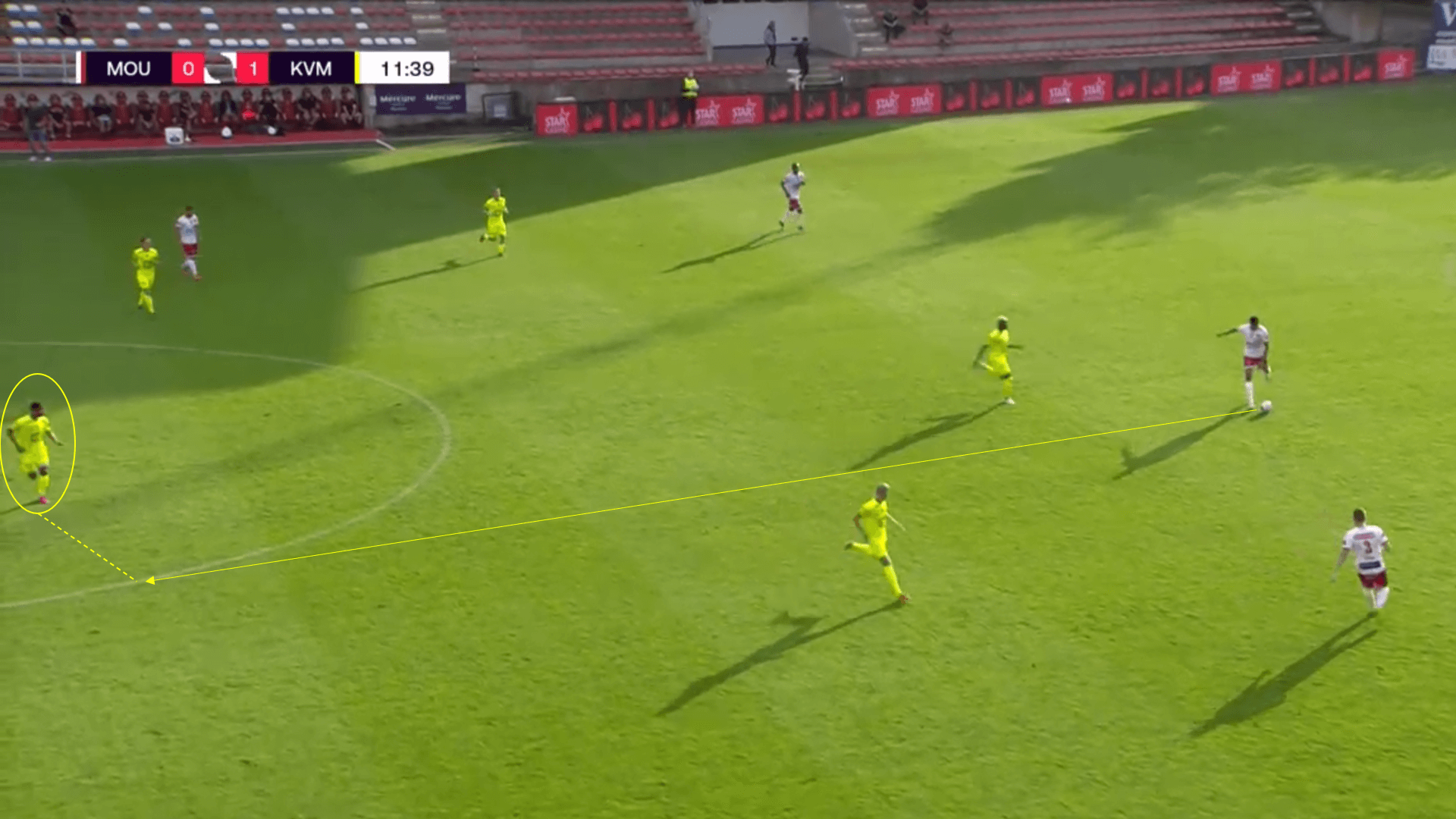 This gave the feeling of a disjointed tactical approach from Mouscron going forward in the first half, as passes were going astray and there didn’t feel like there was a cohesive approach, with plenty of aimless long balls leading to unnecessary turnovers, while slow build-up play meant they were unable to really get in between the Mechelen defensive lines. Even when they did manage to have possession in the opponents’ half, it often ended in a turnover, as the press of the away side’s midfield put Mouscron’s playmakers under plenty of pressure, as we see below in the lack of options for Bakic, with nearly all the passing lanes closed off. It was clear in the second half that Mouscron needed to adjust, which they certainly did in terms of tempo. Bakic and Hocko began to drift into deeper positions in order to help get the ball off of the defence or wing-backs, so that they could negate the Mechelen press. Both players also began to work better as a pair.

If we compare the below image to the earlier one where Bakic lost the ball, we see that Hocko has dropped to become an option and avoided the press. Bakic is easily able to move the ball on to him. This meant they kept the ball more and could pull Mechelen midfielders out of position. Furthermore, it meant that the defenders of Mouscron couldn’t create from the back, instead getting the ball into the two central players, who are better passers. In the first half, the switches of play were mainly coming from the three central defenders, and often were over-hit and went out of play, or caused a turnover. In the second half, players like Bakic and Hoko were the ones executing these passes. In the passage above, because Hocko has dropped deeper, he has a lot more space in which to create, and he can easily switch the ball to the opposite flank, where the wing-back has pushed up. 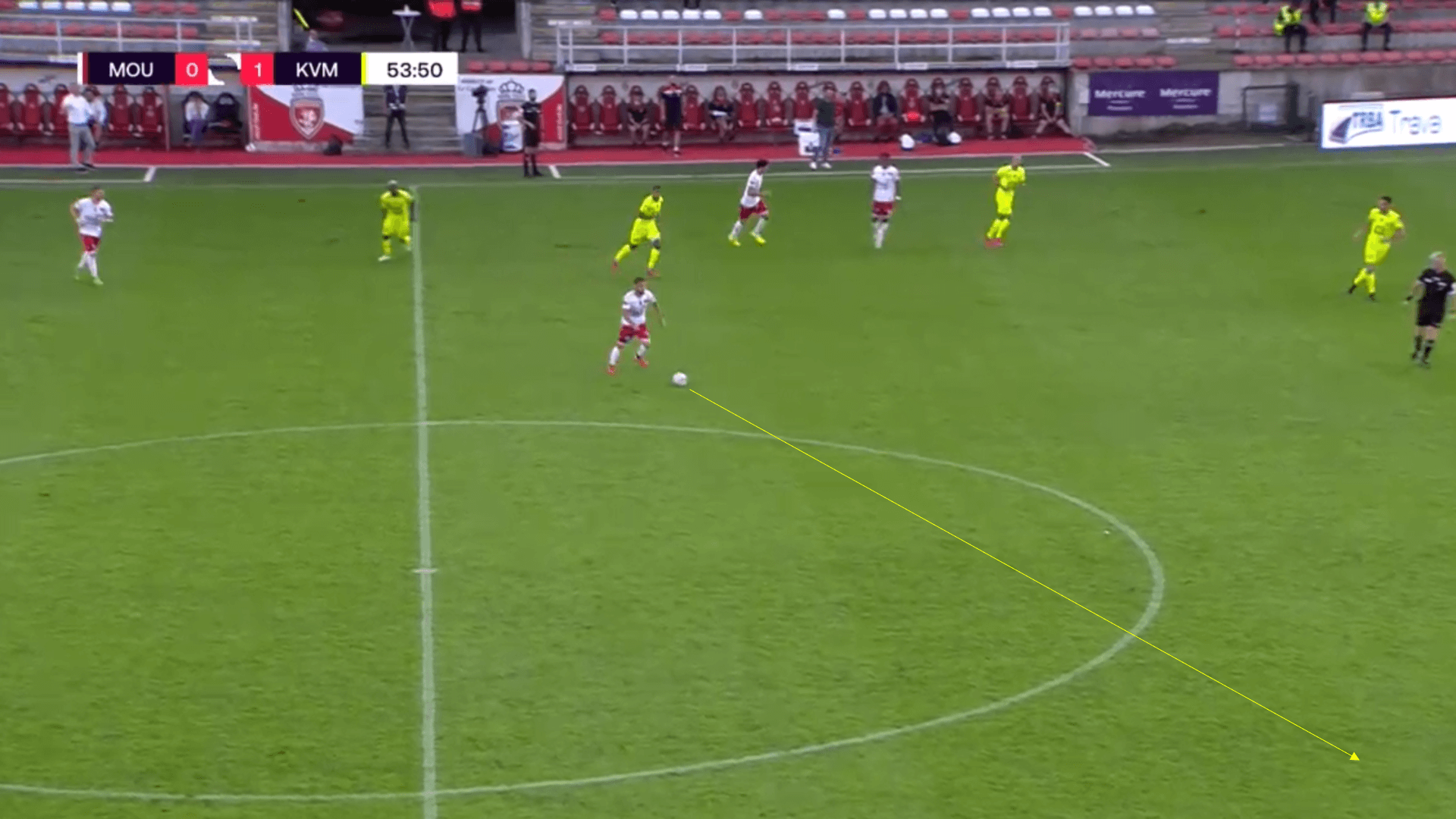 While they were not able to find the equaliser, Mouscron created more chances, and their play felt more coherent than it had in the first half. There were less hopeless long balls and more played through the midfield. It is clearly something they should look to do going forward in the season.

Mechelen as a side like to get the ball into wide positions, as we have already seen with how they create space for Kabore. Storm, on the opposite wing, likes to remain wide, rather than moving inside – more like Hairemans. We see this when Mechelen are building up to the penalty incident, with Storm highlighted on the opposite side creating width. 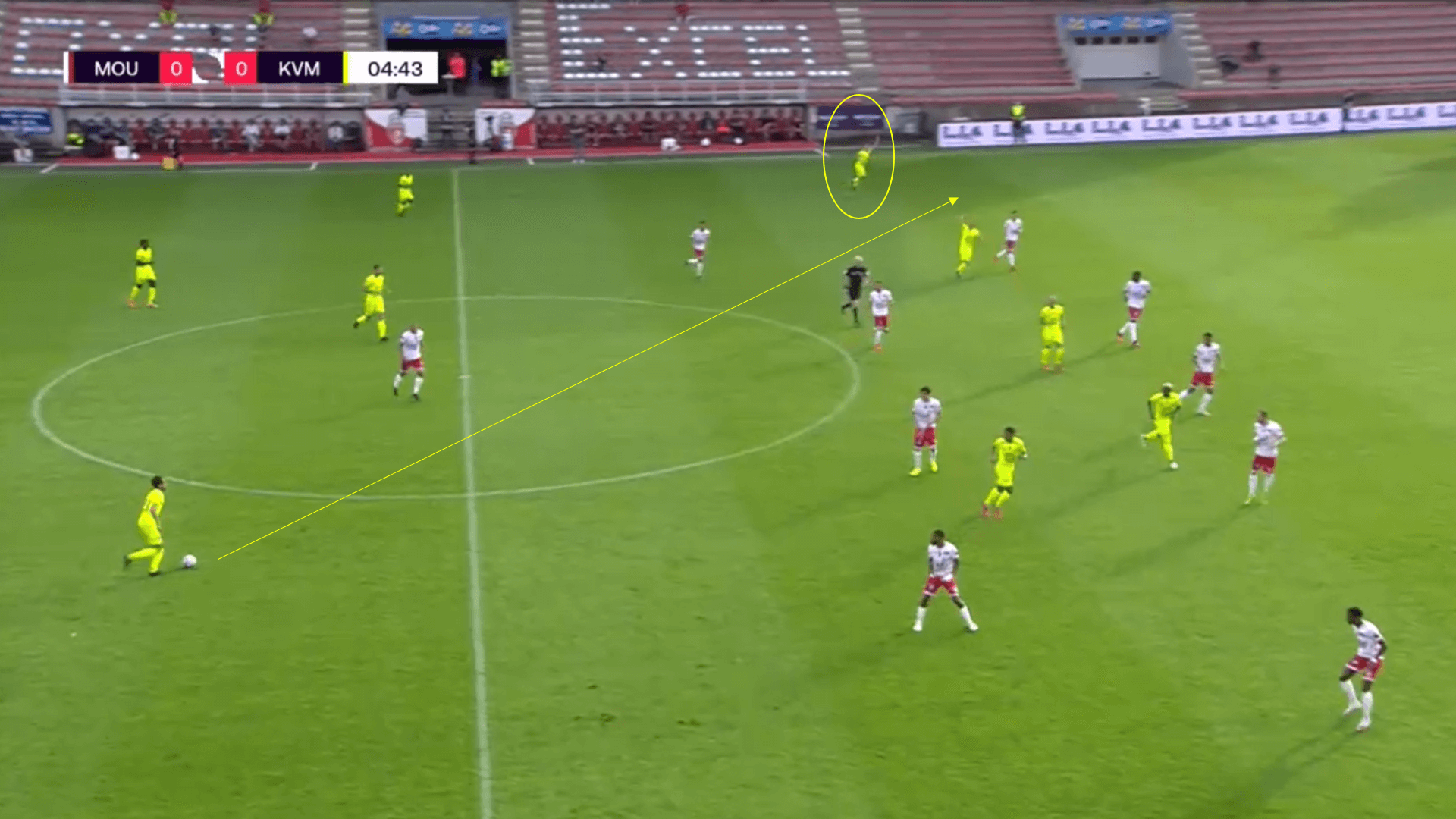 What this allows is the midfielder Schoofs to push up into the area alongside Togui, the area which Hairemans occupies on the right-hand side. Looking at the below still, we see that the pass out to Storm has dragged two Mouscron players out wide towards him. Schoofs has now pushed up, and is on the blind side of the centre-back. 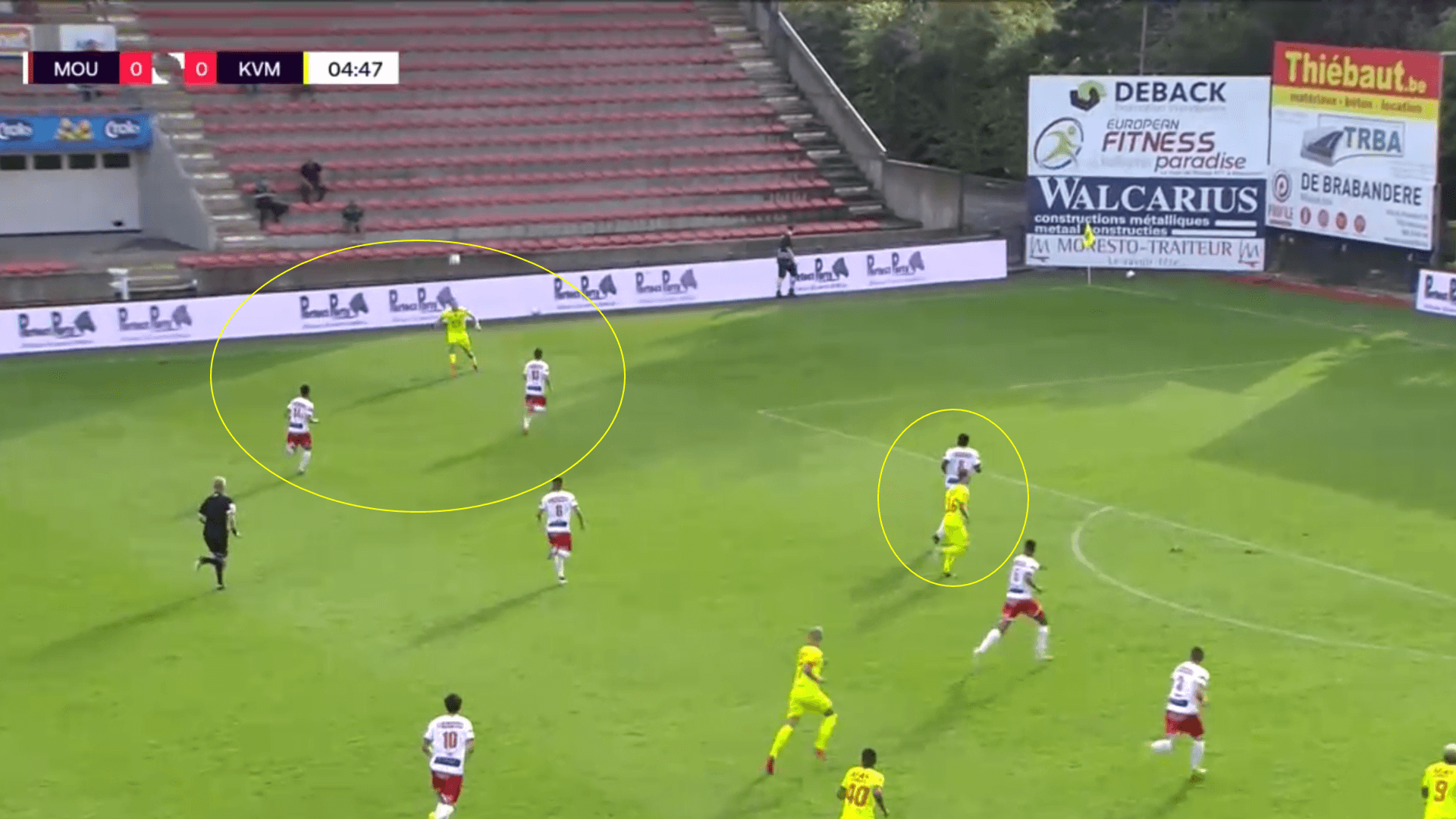 In fairness to Mouscron, the two players make up the ground quickly and force Storm to send the ball back to the full-back. However, we now see the effect Storm being so wide has had on the defending team, with a large gap on the right-hand side of the Mouscron defence. Schoofs himself has used clever movement to now be a viable passing option. 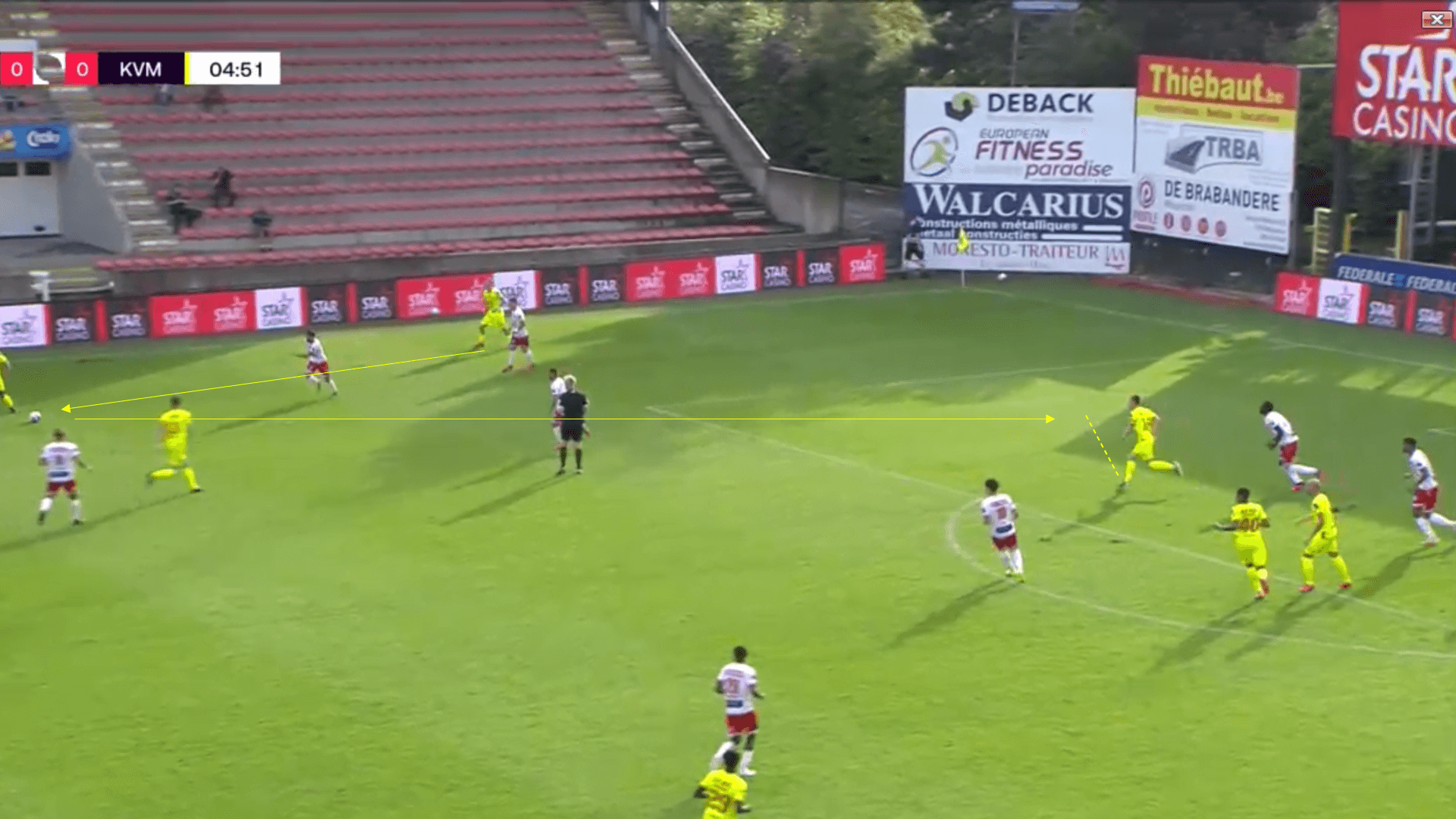 Mechelen’s left-back Bjilker plays a decent ball into Schoofs, who gets the wrong side of the defender and is eventually fouled. As a passage of play, this is interesting, in that it highlights how Mechelen use their wingers differently, and how this creates different attacking opportunities. The movement of Hairemans compliments what they want from Kabore, while the movement of Storm, as we see in this move, compliments a player like Schoofs, who likes to get into the box and support attacks.

Mouscron will be frustrated that, in the end, it came down to a penalty that had to be retaken three times. Mechelen will also be annoyed that their second goal was ruled out by VAR. Tactically, it was an interesting game, with the away side nullifying the home side quite easily in the first half, causing Mouscron to have a disjointed and disappointing attack. Mechelen, on the other hand, were able to create with their use of the wide players, with Storm staying wide and Hairemans cutting inside, both of which made space for other players.

Mouscron should certainly take heart from their second-half performance and their numerous chances to equalise, yet scoring goals will certainly be a worry for them, as they won’t get as many chances against stronger opponents.