The third matchday of the Belgian Pro League had some interesting matchups on the programme. One of them being the game between Standard Liege and Genk.

Standard were on maximum points going into this game by winning their opening games against Cercle Brugge with coach Paul Clement who is former assistant coach at Bayern Munichen, Paris Saint-Germain and Real Madrid.

Genk, on the other hand, had a rather difficult start to the campaign. Although Wolf’s team did secure four points out of six, the way they did it wasn’t very convincing. With this in mind, Genk were eager to show what they are capable of in this intriguing encounter.

The match finished in a goalless draw and while a draw was fair, the match could have gone either way, with many interesting tactical ploys from both teams. This tactical analysis will break the match down into various game moments to provide analysis and insights into the tactics utilised by them. 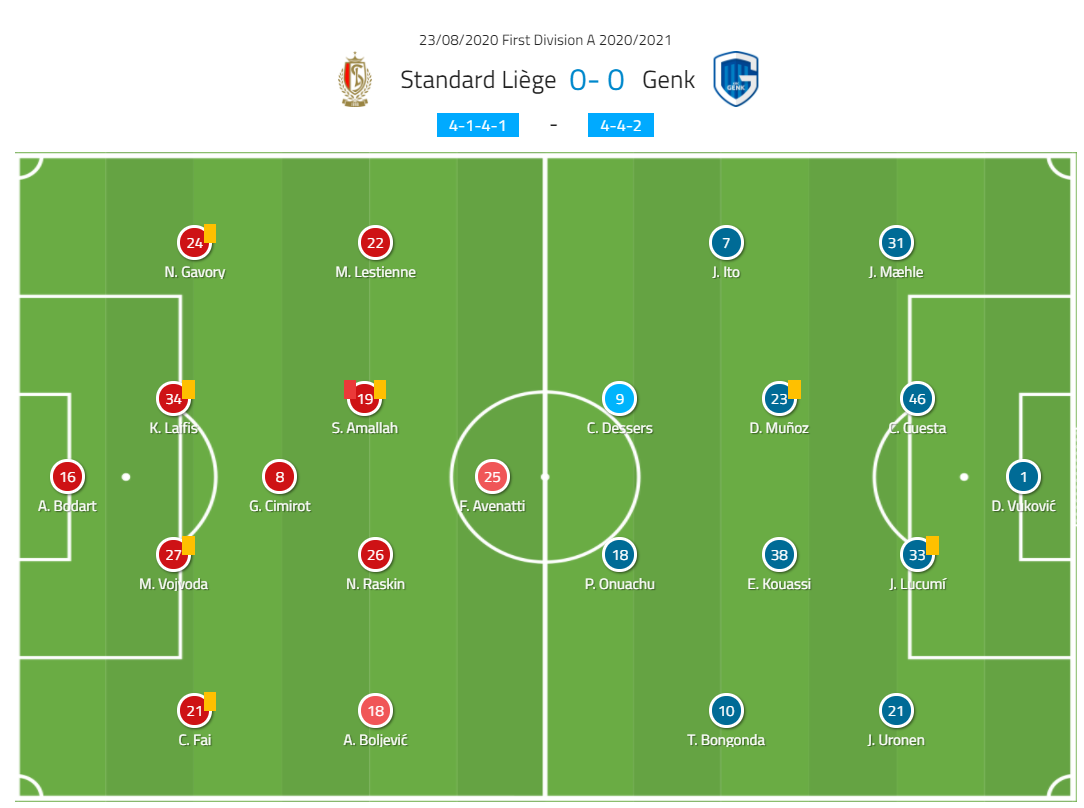 Hannes Wolf started in a 4-4-2 formation on paper. Hannes Wolf started in a 4-4-2 formation on paper. It was a 4-4-2 out of possession but when in possession one of the strikers drop into midfield to create a 4-3-3. Daniel Vuković started in goal for Genk. The defence consisted of Jere Uronen, Jhon Janer, Lucumí Carlos, Cuesta Figueroa and Joakim Mæhle. The centre of midfield was occupied by  Danie Muñoz and Eboue Kouassi. Whilst the flanks consisted of Junya Ito and Théo Bongonda. Ebere Onuachu and Cyriel Dessers led the line for Genk.

Genk started the game with a rather attacking intent. This faded away the longer the game went on. Genk would build in a 2-2 stagger, where the two pivots would sit in front of the two centre-backs. Below Kouassi sprints to the far side to create a rectangular shape with the two centre-backs and Muñoz. 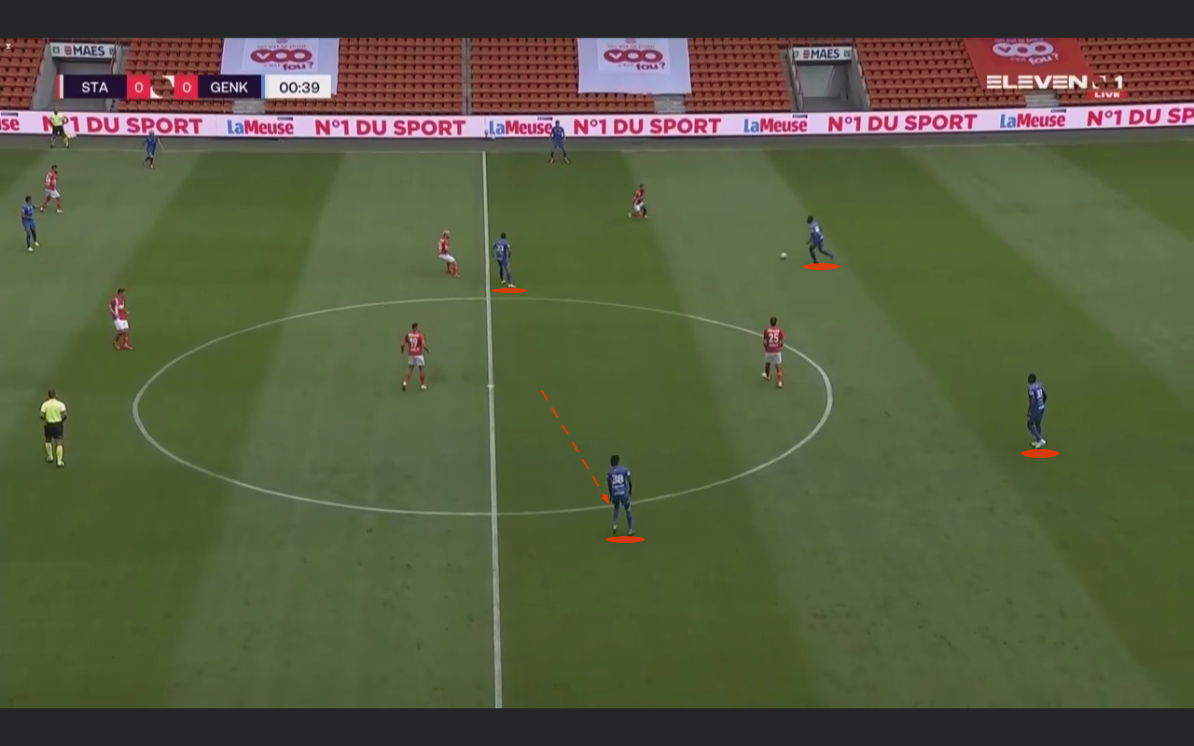 This build-up scheme has different principles in order to be effective. Largely, the positioning and distances are important. In order to create optimal central connections the Genk centre-backs, they position themselves relatively close to each other. This way they can maintain a good connection, plus they are able to find different ball options by passing to each other on the shorter distances. This allows them to move the opposition lines to create access to the central-midfielders.

As the centre-backs are on the ball it’s almost always the ball far centre-midfielder who moves away from them diagonally, whilst the ball near pivot stays in position. Due to that, space opens on the near side, and more optimal central dynamics is created. The centre midfielders’ central position also opens the half-spaces, to offer more accessible ball options, when the centre-backs have the ball.

The image below clarifies this. Cuesta possesses the ball in the half-space. Due to the 2-2 stagger and the positioning of the right-back Mæhle, the opposing winger gets caught in two minds. Lestienne steps out to press the centre-back and closes off the passing lane to Mæhle. This opens up space to play a diagonal pass to Ito on the right. Following a deviation by Ito, Mæhle can drive into space with the ball, successfully utilizing the 2v1 advantage on the side. 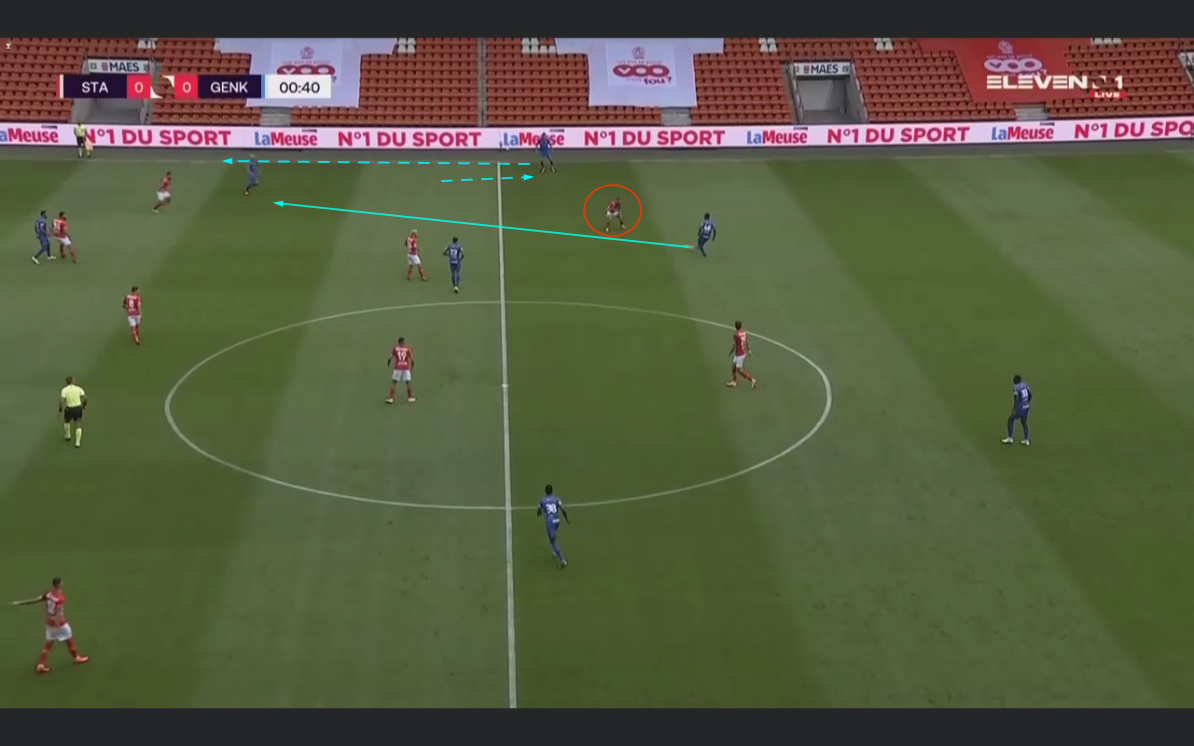 Standard Liege noticed the success Genk were having with these wide dynamics. As a consequence, Montanier opted to keep his wingers inside to close the passing lanes to the wingers. This resulted in the passing lane to the full-backs opening up. Following a pass from the ball carrying centre-back to the full-back, the winger could penetrate in the half-space and receive the ball behind the last line. The solution lied in a central player pressing the ball carrying centre-back and thus nullifying the wide overload. 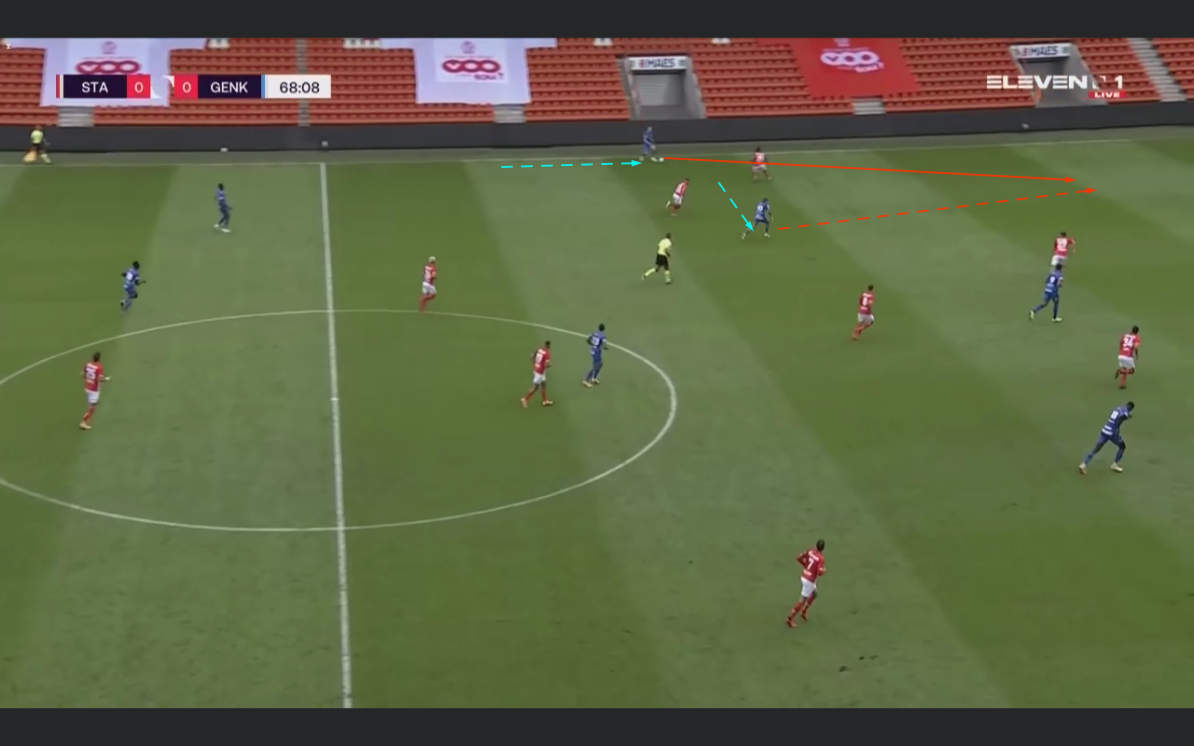 This build-up of Genk wouldn’t only have advantages. Whilst the four players who created a central box were occupied close to the ball, the other players took up more advanced positions on the field. As Standard defended in a medium, compact block and had a central overload, two Genk midfielders against three Standard midfielders, they closed off the centre easily. Once they won the ball centrally, Standard had the chance to counterattack quickly. Due to the wide positioning of the full-backs, the Standard wingers could penetrate the half-spaces once they won the ball back because of their advanced positions in the medium block. 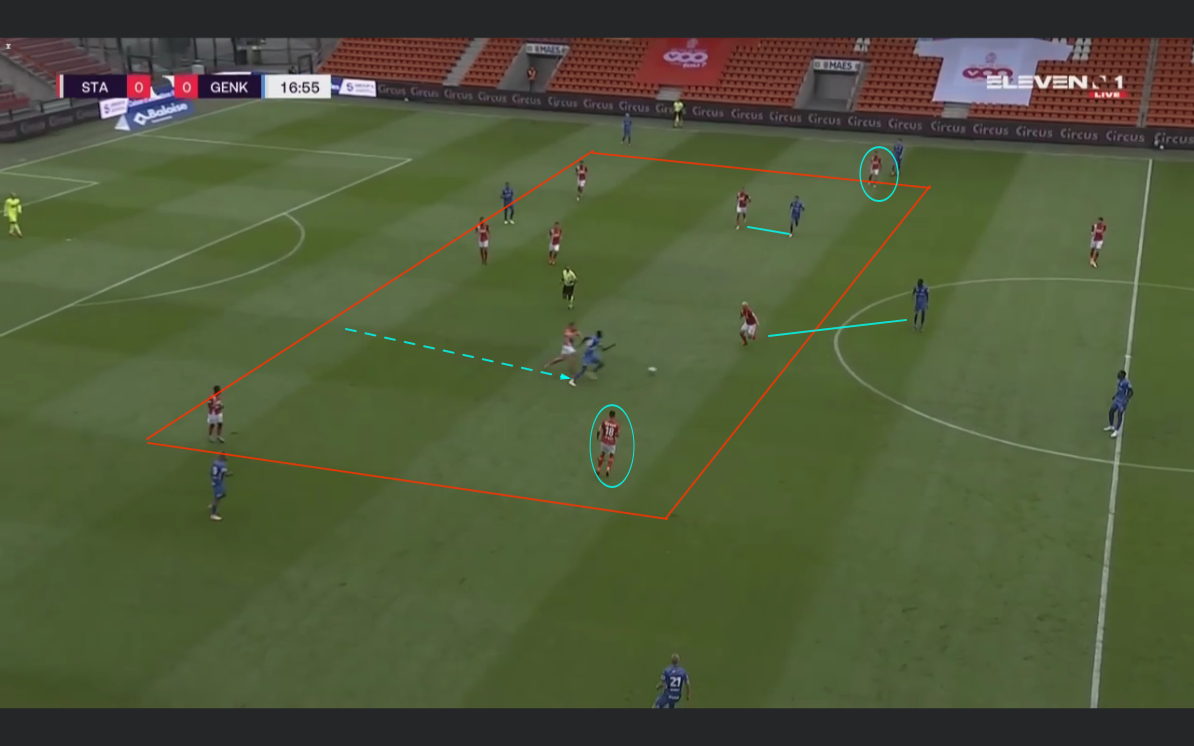 As Genk used wide dynamics to create goal-scoring opportunities, Standard were also eager to attack down the flanks and create their chances from there. Standard Liege would do it differently though.

The main focus for Standard was to overload one side and attract enough players to that side. In order to isolate the ball far side. And with a switch of play, the winger would receive in open space or at least in a 1v1 situation.

In the below image, Standard create a 4v3 overload down the right-hand side. The centre-back pushes very wide, whilst the full-back pushes higher up and the winger moves inside. Because of the midfield overload, as Genk played with only two central midfielders and the lack of tracking back by the Genk strikers, Standard could create the overload easily as the free man became the wide pushing centre-back. 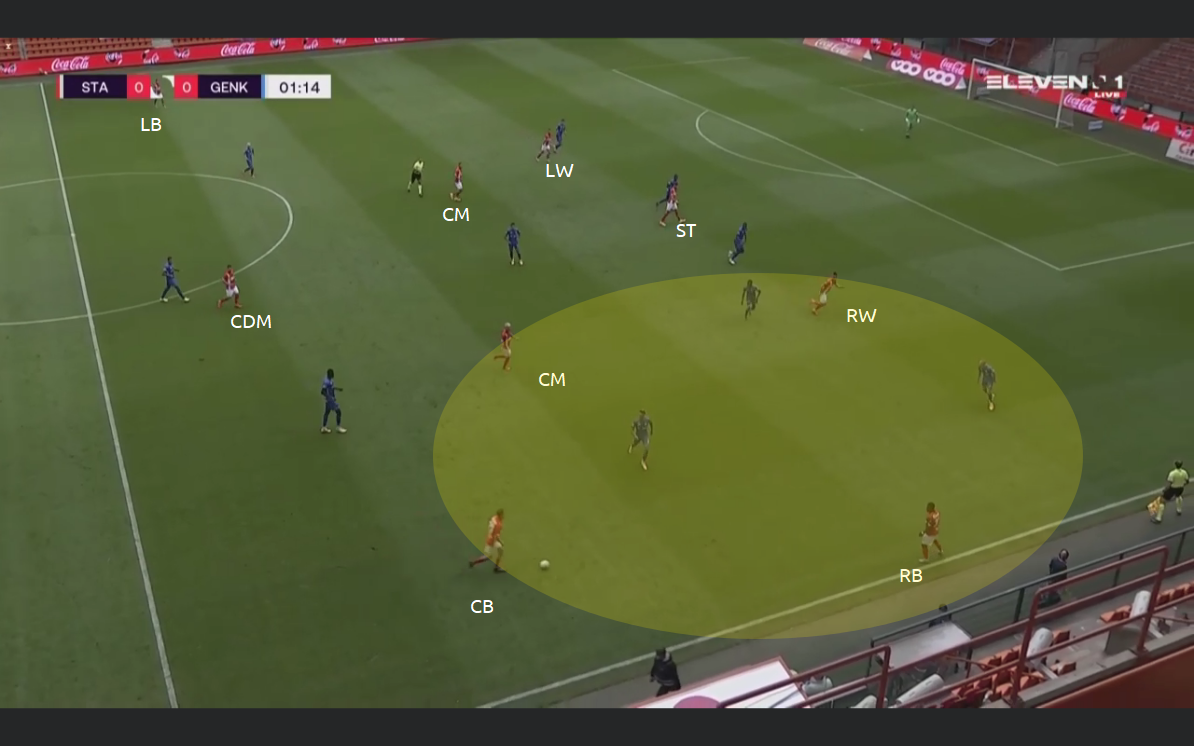 But progression is not guaranteed despite having a man advantage. The lack of movement and rotations saw Standard not finding space between or behind the lines. Beneath is another example. In this case, there are rotations but because there are no runs in behind, their play becomes predictable and the ball has to be played backwards. 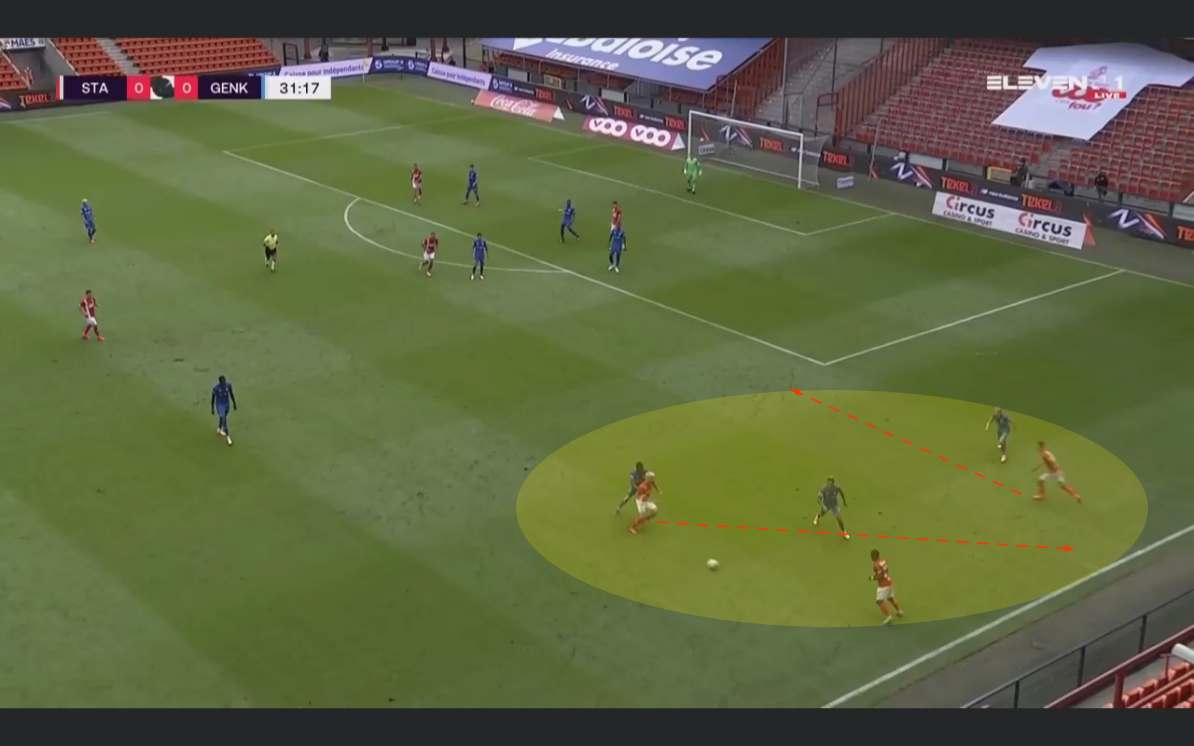 This wasn’t a huge issue for Standard in this game as the opponents were attracted to the ball side. Which means that the ball far side was isolated by one player. Below this situation occurs where Standard just created an overload on the left side. What follows is a quick switch of play to the other side and an opportunity for the wide player to cross. 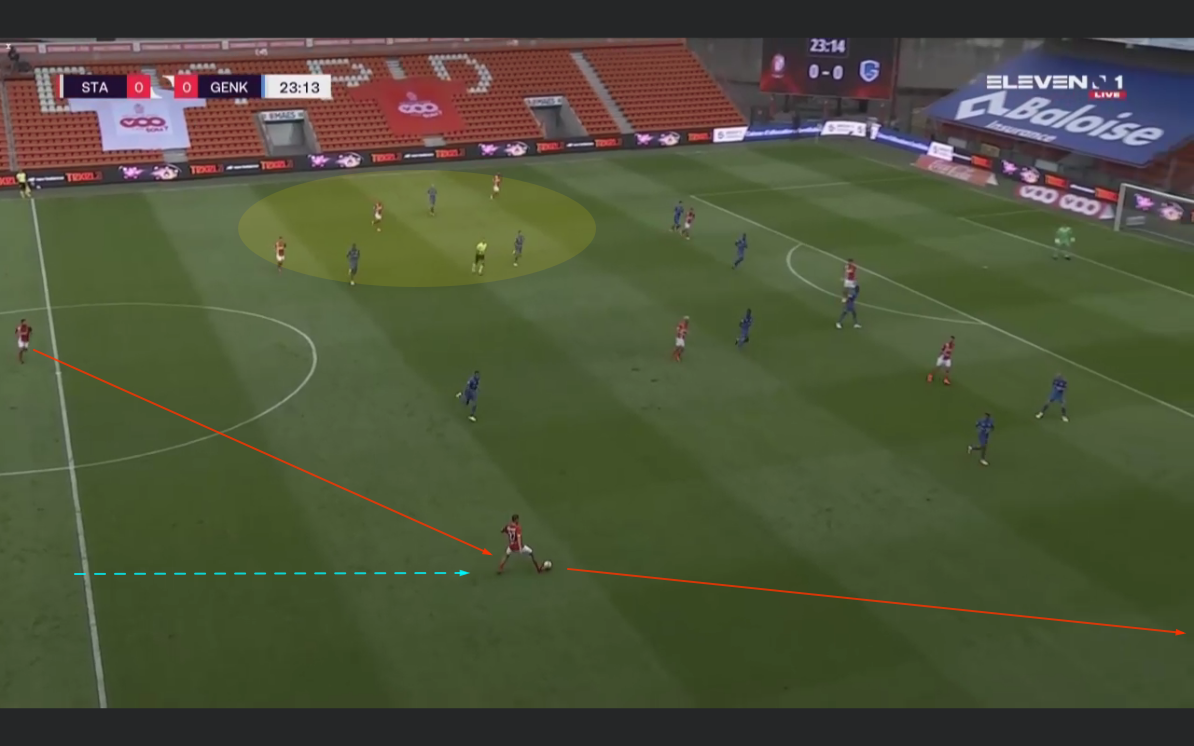 Above we discussed Standard Liege’s wide overload dynamics and it’s consequences. Also, we highlighted that it wasn’t always the case that they could progress through the overloaded side because of the lack of depth.

Thus, Standard Liege had to find other ways of reaching the opponents’ goal. This came through early crosses. Especially looking to exploit the space behind the last line as a traditional cross from the side of the box doesn’t give this advantage. Below we can also see how Standard create a 3v2 overload on the far side once a cross is given. The first ball is undoubtedly intended for Avenatti, due to his physical presence, whilst the other two players look to pounce on the second ball or rebound. 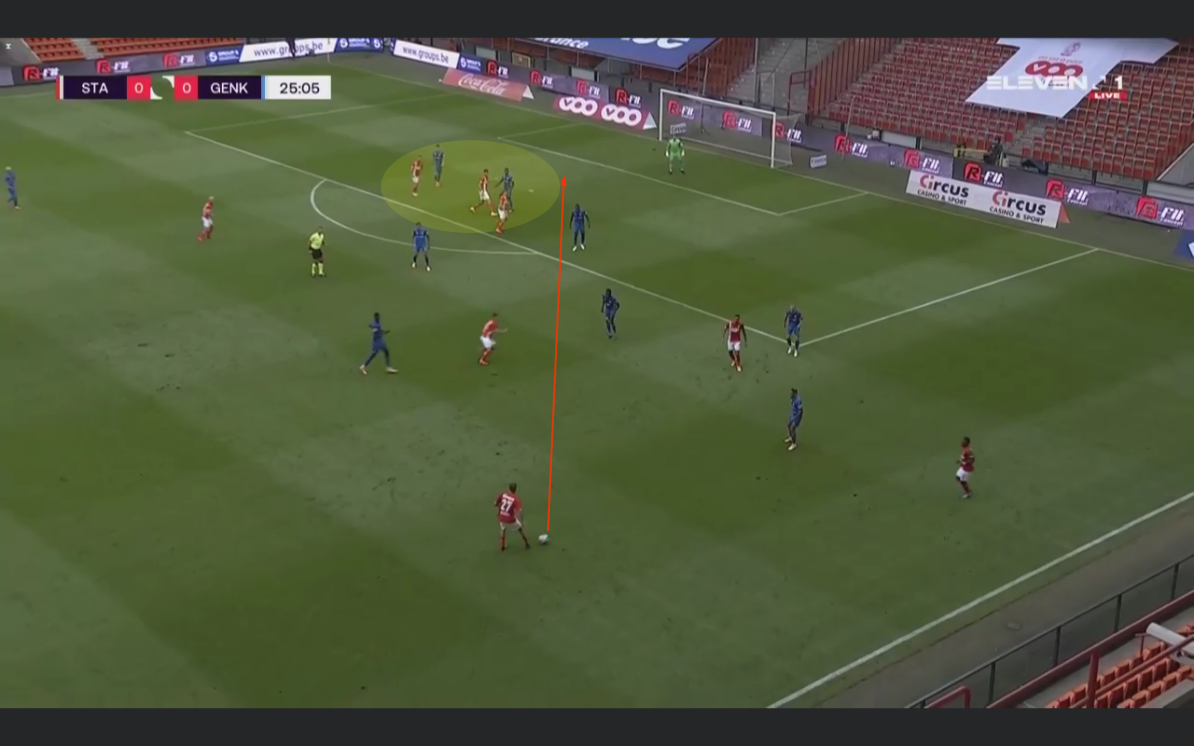 In the below image, the confirmation of Standard Liege’s early cross strategy. Most of the crosses come from the space in front of the opponents’ penalty area. Interestingly enough, not a winger or full-back delivered the most crosses into the box. But Gavory, the centre-back, delivered, with eight crosses, the most of the whole Standard team. In total, they delivered 33 crosses during the 90 minutes with only 10 finding its target. In contrary Genk only completed 11 crosses in an even possession shared match. Whilst both teams had wide and crossing intentions.

Whilst Belgian football fans were looking forward to this mouth-watering encounter, the game did disappoint and end in a goalless draw. Few chances were created with both managers trying to tactically outwit each other. As all of the big five teams in Belgium are struggling at the moment this year could be a great opportunity for an underdog to make a claim for the title. If Genk or Standard have these ambitions, their attacking play has to be more effective in the future as both teams don’t benefit from that single point