Andre Silva is now a 24-year-old centre-forward who has just finished his first season of a two-year loan spell with Eintracht Frankfurt in the Bundesliga. The Portuguese has experienced a jumbled career so far, going from a teenage wonderkid at FC Porto, to a ‘flop’ at Italian giants’ AC Milan, to a promising but inconsistent striker at Spanish side Sevilla. This season, he was brought in to replace the man who went the opposite way in the swap-deal which saw him brought to Frankfurt, Ante Rebić, who had just come off a successful World Cup campaign with Croatia and a great season at the German club.

Silva, who first caught the eye of scouts around the globe when he scored 15 goals in one game as an 11-year-old for Salgueiros, has seen significant success in his first season at Die Adler through both his goalscoring and creative exploits, as well as being a useful tool in the high press which Adi Hütter employs.

Silva’s main strength is his positioning, while he is not the quickest or strongest player, he negates these difficulties by his ability to find space in the box, between the centre-backs. We will dissect this further through an analysis of his performances this term.

Despite profiling as a centre-forward, in Hütter’s 3-5-2, the Austrian coach’s tactics encourage both of his centre-forwards to drift wide to create space centrally, while also adding to their unpredictability in the final third. Silva displays an understanding of how attacking rotations work via a multitude of quick short passes which draws pressure from the opposition to open up pockets of space for his teammates. His decision-making in this regard this season has been strong, knowing when to drift wide and ask for the ball down the wings, and when to wait for the right opportunity inside the opposition’s penalty area to get on the end of a goalscoring opportunity. This scout report will display how he has adjusted Hütter’s demanding attacking philosophy this season.

From a defensive aspect, Silva is an excellent asset for the team due to his fantastic energy and tactical understanding when to press. As the first line of pressure, we see Silva initiate the press regularly, as he moves out to engage the opposition and he continues this press when the ball is played backwards. He has a good understanding of angles when pressing and keeps opposition players in his cover shadow as he moves to engage the ball carrier. In this tactical analysis, we will also cover how important his pressing activity is to a Frankfurt side who ranks fourth in the league for successful pressures.

When detailing André Silva’s style of play, we will focus on three key sides of his game. These combine to offer an insight into the kind of player that Silva is and what he could grow to become under Hütter in the future. At 24 years old, it is unlikely we will see his tactical profile transform too much, so we can use these strengths to identify how he helps his side to win games.

Now, what are Silva’s key strengths and what is his playing style? He has an unflappable composure and poacher’s nose inside the opposition’s box, which is why he was compared with Sevilla club legend Frédéric Kanouté at the start of his time in Seville. His speed of thought is what makes him such an effective centre-forward, punctuated by the uncanny knack for being in the right place at the right time. He links well with his teammates, which was especially prevalent at the beginning of his time at Sevilla, which permitted Frankfurt board member Fredi Bobic to state in an interview “Andre is perfectly suited to our coach’s philosophy” before the Portuguese forward joined the club. This was likely due to his strong interplay, which is so important to Frankfurt’s quick passing play. Finally, he has the athletic ability and the willingness to work hard and press when his team are out of possession. This is perfect for a Hütter side who apply a high line of pressure to force the opposition into errors.

Positioning & finishing in the final-third

Frankfurt are a team whose modus operandi in the final-third is to cross the ball into the box, as seen by the high average positions of both of their wing-backs this season. In fact, they had the second-most crosses into the penalty area (not including set-pieces) in the Bundesliga this term, with 118 completed. Their wing-backs are crucial to ball progression down the wide channels, and also in the final third, to stretch the opposition defence and create space for their forwards inside the penalty area.

In the above analysis, we see Almamy Touré, Erik Durm, and Djibril Sow attempting a wing rotation down the right flank, creating space in behind for a cutback from the byline.

The ball is drilled into Silva’s feet by Sow, who drew three opposition defenders to his location. While Mats Hummels raced towards Sow to block the cross, Silva stood still to utilise the space left by the German and finished his chance with aplomb.

Although Borussia Dortmund were not a side famed for their defensive knack in the 2019/20 season, the fact that Silva was able to step up against a top Bundesliga side is a testament to his quality. In this example, we see his previously mentioned speed of though come in to play, as he saw Hummels engage his teammate, he stopped his movement, remaining aware that this was the best position to receive the ball and have a high-quality goalscoring opportunity.

His ability to get into goalscoring positions on a regular occasion is reflected in his 0.55 non-penalty xG per 90, which ranked fourth in the Bundesliga, only behind elite forwards Robert Lewandowski, Erling Braut Håland, and Timo Werner, while being ahead of the likes of Marco Reus and Serge Gnabry.

In terms of Silva’s creativity this season we see him take up positions within the half-space or down the wings. He will shift from his position in central areas, drawing a defender with him, when the team is progressing the ball up the flanks. This creates an overload down the wide channels, while simultaneously creating space in central areas for teammates to run into. As the ball enters the final-third, Silva will pick up the ball and run with it towards the byline, to produce a cutback towards his fellow forward.

Although, this is where he comes up short on occasion, as his dribbling ability is limited (he completes only 51.4% of his attempted take-ons). He often makes it far too obvious where he intends to travel with the ball, making it easy for a defender to anticipate and recover the ball.

In this example, we see Silva positioned in the half-space, dragging Javi Martínez out of position and creating space for a potential one-two.

In the opposition box, Silva approaches David Alaba and engages the Austrian with the ball at his feet. Gonçalo Paciência is awaiting the ball in the box inside the six-yard-box once Silva takes it past Alaba and finishes his chance calmly.

Here, we have seen Silva position himself intelligently to receive the ball. As the ball progressed in the wide area, we see Silva move towards the move to connect the ball from midfield into the attack with one simple pass forwards. From here-on, he makes a movement to create separation between himself and the defensive player to ensure he receives the ball in space. As he receives the ball in the opposition’s box, he is able to keep his head up and scan the attacking situation.

As a right-footed attacker, we can assume that Alaba was expecting Silva to cut inside onto his strong foot, but he blindsides the Austrian with his dribble towards the byline. This attacking interplay is not limited to this one event, as is shown in his 0.25 xA per 90 which ranks in the 93rd percentile of forwards in Europe’s top five leagues (with 10+ starts).

Out of possession Silva often is the player who leads the press. Whenever the ball enters his territory on the pitch, he is restless regaining possession for his side, even going as far to track back into the defensive third to recover the ball. Silva is an energetic presser, more often than not, he will run at the opposition player who is receiving the pass, rather than look to block off the passing lane. This, in turn, puts the opposition player under immediate pressure to release the ball or bypass the press through a progressive run of their own, which is difficult under the circumstance. 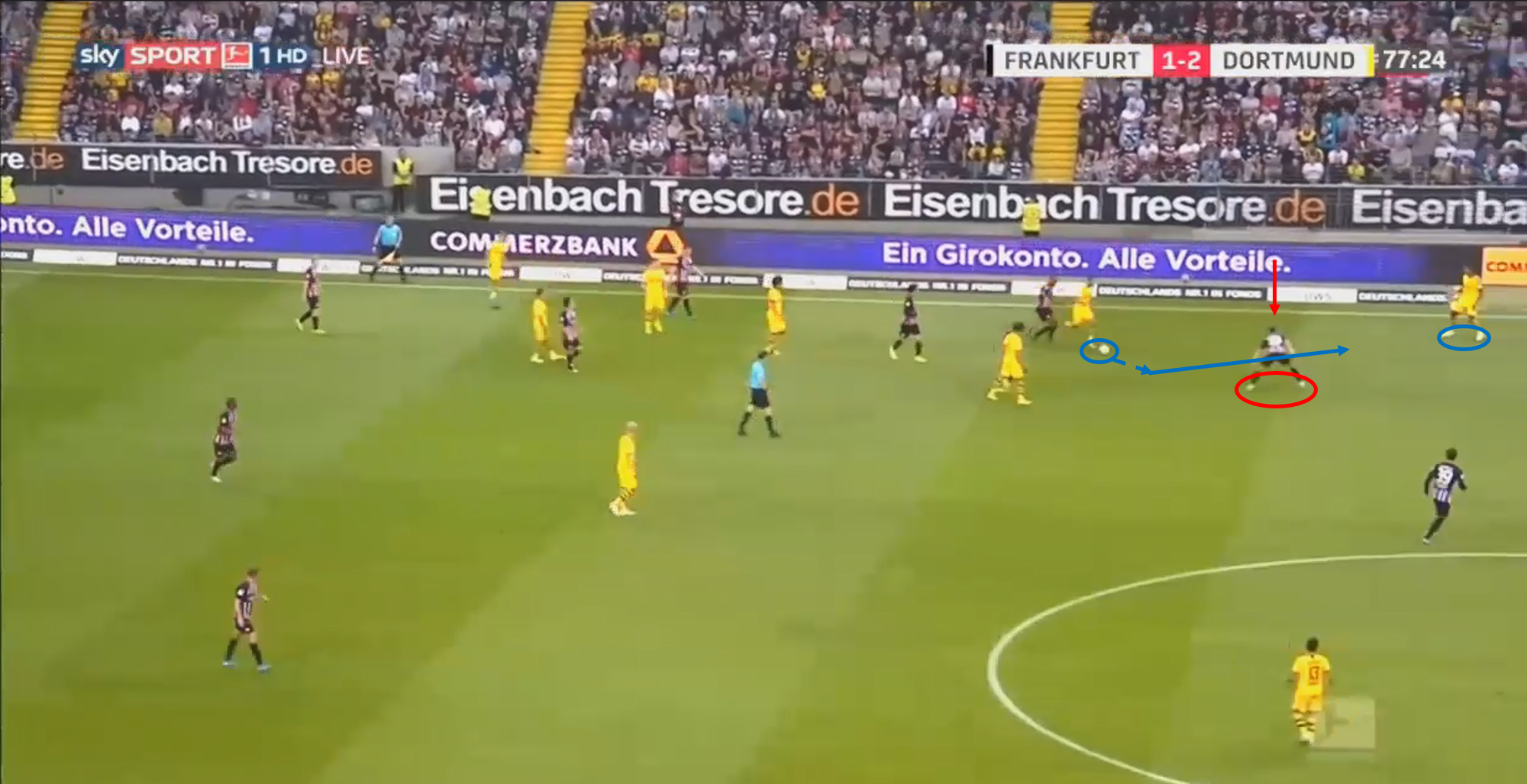 In the above analysis, we see a Dortmund attack break down as they are forced to pass the ball backwards. Silva is keeping a keen eye on the direction of the ball and he is in the correct position to employ the press. 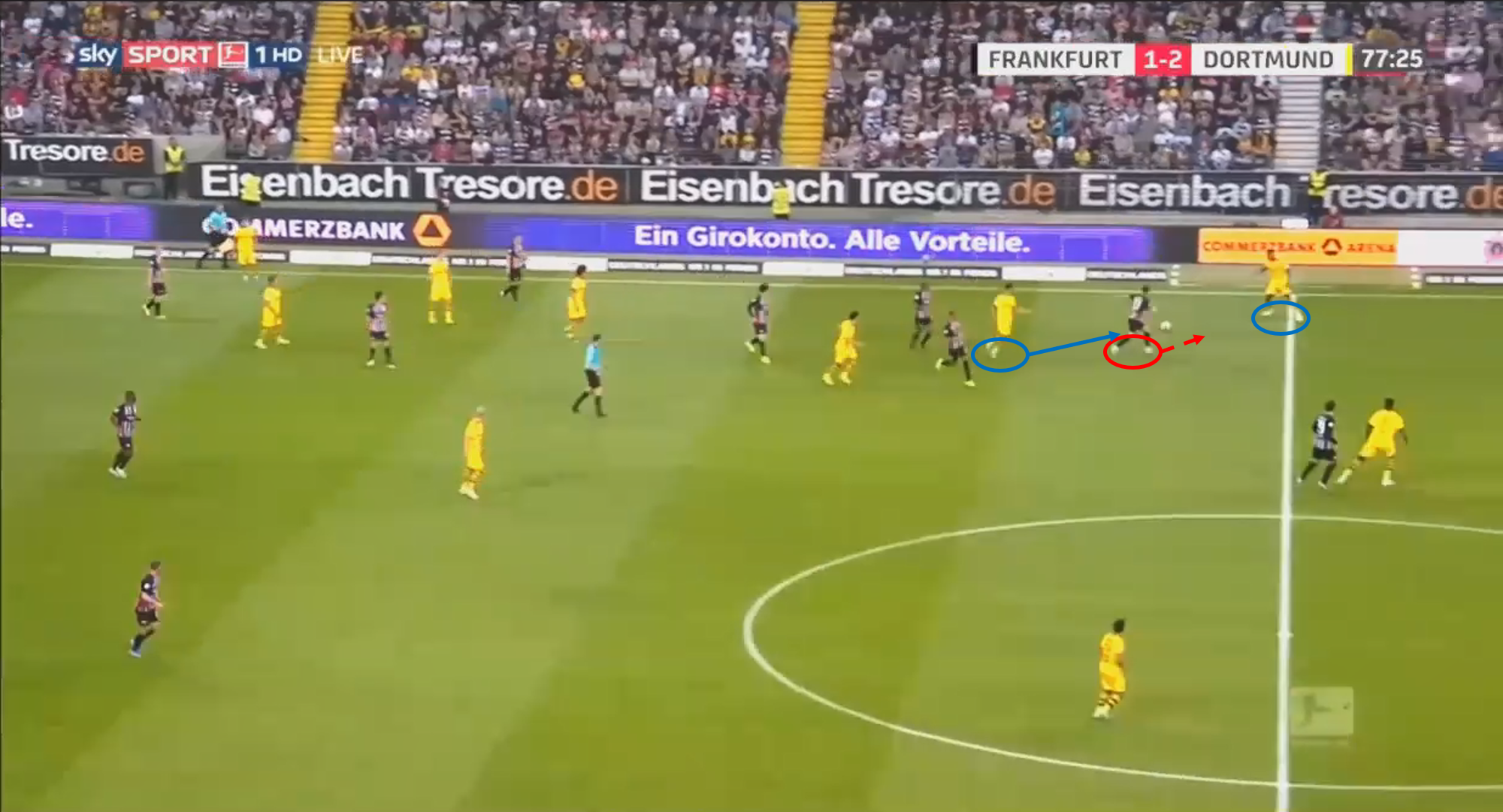 As the ball is passed from Jadon Sancho to Manuel Akanji, Silva engages in pressing the Swiss instantly. Akanji looks to carry the ball beyond Silva’s press, but he is unsuccessful as the Portuguese forward completes a tackle to regain possession for Frankfurt.

Now, we have seen that Silva under Hütter likes to commence the press as the highest situated individual for Frankfurt on the pitch. Not only this, but we have also observed that his pressing style is to engage the player rather than the ball or look to cut off the passing lane. His awareness of where the ball is going to go, however, gives Silva an advantage against the opposition, as they are allowed a very small window for success in keeping possession or progressing the ball forwards. He attempts fewer pressures in the attacking third than teammates Daichi Kamada and Gonçalo Paciência (8.86 attempted compared to 9.27 and 10.5 per 90), but his success rate is higher, indicative of his effectiveness in the press (36.3% success rate compared to 29.1% and 27%).

In his second season at Die Adler, Silva will hope for more game time than he was awarded in his first season. The 24-year-old racked up 1,575 minutes for the side which finished ninth in the Bundesliga, and you would envisage that with more playing time, he would help Frankfurt win more points than they did last term.

Frankfurt lost a good player in the form of Rebić, but what they have received in return is a player who scores more often, is just as creative, and is a far more effective presser than the Croatian. In addition, Silva is a couple of years younger than Rebić, with a little wiggle room to improve in the future and further embed into Hütter’s squad. Clearly building a strong connection with young Japanese forward Kamada, Silva could be as good of a replacement for Rebić/Jović that a club of Frankfurt’s stature could conceivably hope for at present.