Getafe hosted Barcelona at the Coliseum Alfonso Pérez and managed to upset the favourites. It was a 1-0 victory, courtesy of a second-half penalty kick, that gave the hosts all three points and a place among the top teams in the La Liga table.

The Catalans’ season of catching up to Real Madrid is off to a slow start and Ronald Koeman will have a lot of work to do. This tactical analysis will dissect both teams’ tactics and show you just how Getafe beat Barcelona.

José Bordalás didn’t tinker too much with the team that lost 3-0 to Real Sociedad in their last league clash. And while that was far from an exemplary performance, Getafe showed that it was just a blip on the radar. David Soria started in goal and was protected by a back four of Damián Suárez, Erick Cabaco, Djené Dakonam, and Mathías Olivera.

Cabaco was the only change from last time, replacing Xabier Etxeita. Marc Cucurella, Mauro Arambarri, Nemanja Maksimović, and Allan Nyom were deployed in midfield and behind the striker duo of Cucho Hernández and Jaime Mata, who replaced Ángel Rodríguez in the lineup. 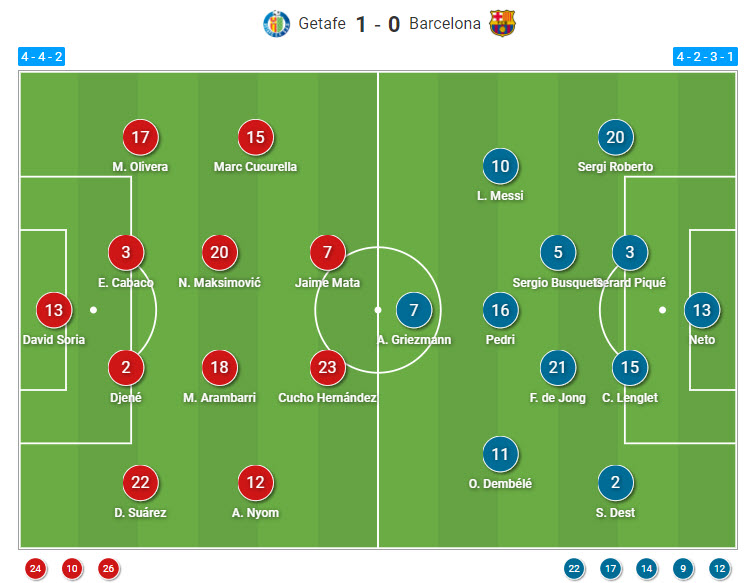 As for Koeman’s troops, we saw a couple of changes to the team as well. Neto was still in goal, courtesy of Marc-André ter Stegen’s injury, and the backline consisted of Sergi Roberto, Gerard Piqué, Clément Lenglet, and the newcomer Sergiño Dest. The latter replaced the injured Jordi Alba.

The midfield also saw one change as Pedri replaced Philippe Coutinho in that attacking midfielder position while Frenkie de Jong and Sergio Busquets were deployed in a double-pivot. There was also one change up top with Ousmane Dembélé starting next to Antoine Griezmann and Lionel Messi.

By far the best part of Barcelona’s tactics was in the first phase of attack. The Catalans’ 4-2-3-1 interacted well with Getafe’s 4-4-2 mid-block and there were rarely any issues in the build-up. Of course, their opposition are usually notoriously aggressive but most of their aggression was in the mid and first third of the pitch.

When attacking, Barcelona would push the full-backs to around the half-way line and then drop De Jong into the backline as the left centre-back to create a 3 v 2 battle against Getafe’s pressing squad. 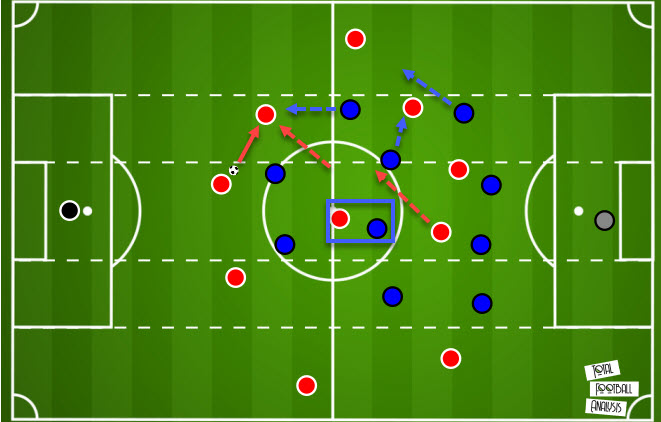 You can see how the two systems interacted with each other in the graphic above. De Jong becomes the left centre-back, establishing numerical superiority and allowing Barcelona to bypass the press easily.

Getafe, on the other hand, would alternate between the 4-4-2 and then the more aggressive 4-3-1-2/ 4-3-3 when advancing up the pitch. Once the ball was deployed towards the third man in Barcelona’s defence, the press was triggered.

Above, Nyom immediately jumps on De Jong as the ball is being recycled towards the Dutchman while Maksimović keeps Busquets tightly marked. A very similar thing happens when Getafe press in a 4-3-1-2 with Maksimović again being tasked to stick to Busquets.

Cucho and Mata chase the ball and Nyom joins them higher up if and when possession is starting to shift wide. This was true regardless of the side Barcelona tried to advance through. 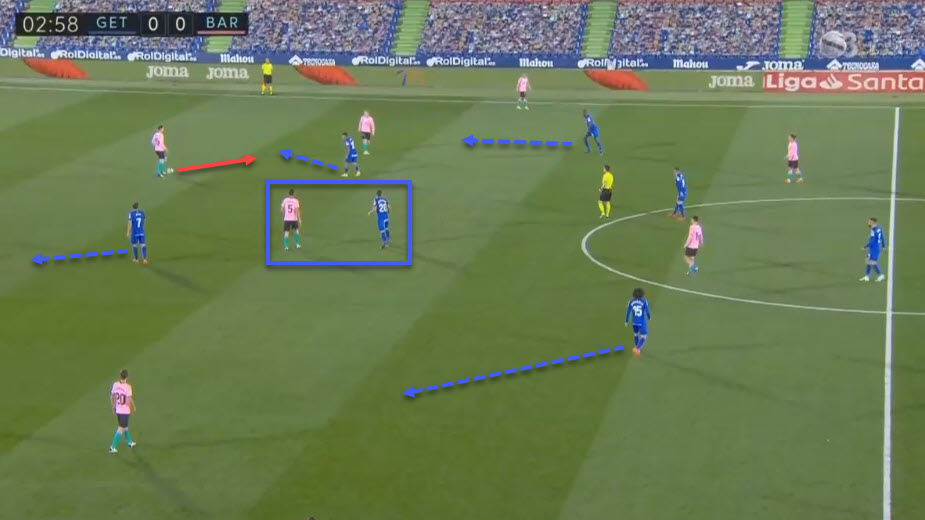 The trigger for the collapse was always the wide man receiving the ball. Mostly that was De Jong in the backline, but at times, Barcelona would drop Roberto deeper as well but this didn’t alter Bordalás’ approach.

Down below, you can see how a Getafe collapse would look like once the ball was deployed to the flanks. Roberto receives a pass from Piqué and that immediately means the players in blue run up and squeeze the possession away from them.

In this instance, both pivots are tightly marked and even the dropping forwards are closed down before they can react, resulting in Barcelona losing the ball in the following example. 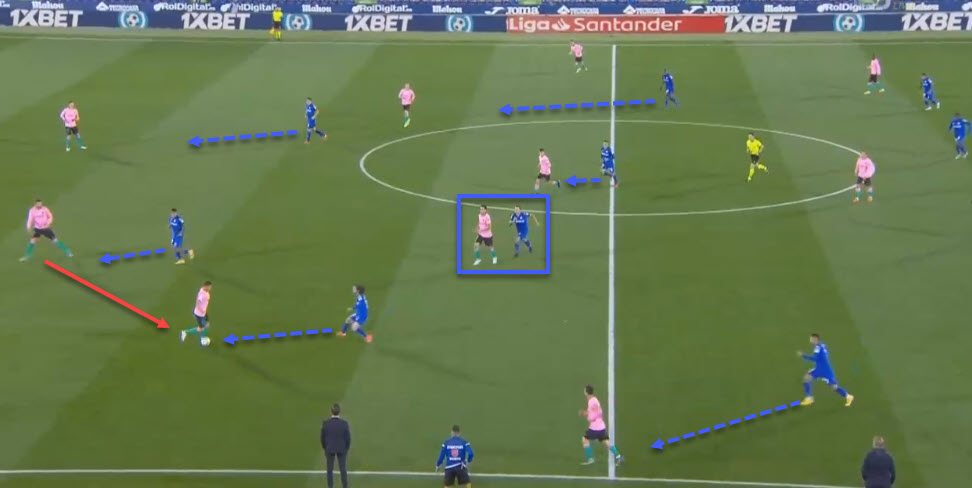 But as mentioned earlier in our tactical analysis, the build-up phase wasn’t exactly the problem for the away side. Apart from creating overloads in the first phase, Barcelona would drop Pedri deep to create numerical superiority against Getafe’s midfield.

The youngster was crucial in advancing the ball and creating chances once they reached the final third. Notice below how Neto can find Pedri with a direct through ball since Arambarri and Cucurella have multiple targets to cover.

Similarly, both Arambarri and Maksimović are marking Barcelona’s double-pivot so Pedri dropping down means there’s a 3 v 2 advantage for the Catalans. You can see such an instance in the following example.

De Jong and Busquets keep their counterparts occupied and by moving in opposite directions, they also move Getafe’s players who were defending in a heavy man-marking manner throughout the clash.

For that reason, a channel opens up for Pedri and Lenglet finds him with a piercing through ball.

The problems for the guests arose once they reached the final third. Outplaying the first line of press was not a problem, but breaching the compact 4-4-2 block in deeper areas certainly was.

One of Barcelona’s main issues was getting access to the half-spaces in and around the opposition’s box. The ball was often recycled towards the wings, getting it up the pitch through Dest, Roberto, or Dembélé but the combinations were extremely tough to execute.

The reason for that is simple – Getafe worked well to collapse on the wide players, creating overloads and shutting down channels towards the half-spaces and central positions. 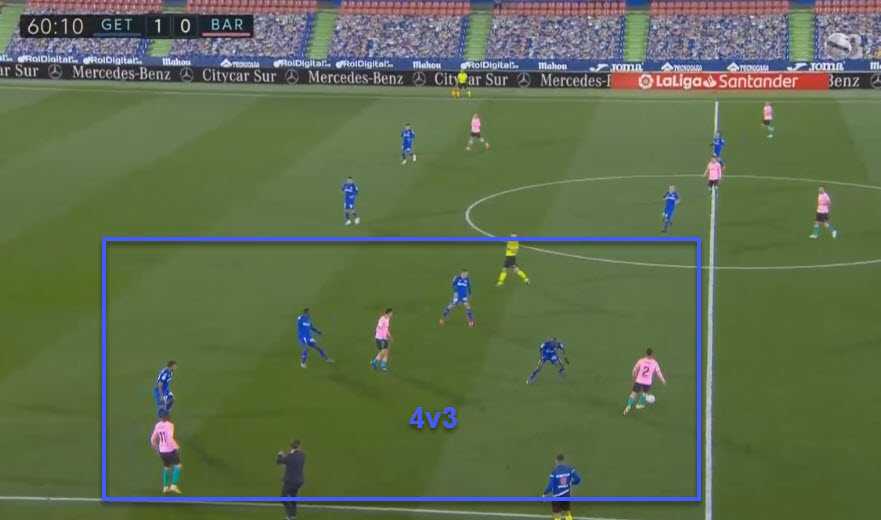 Above, you can see one such instance when Barcelona try to combine with Dembélé, Pedri, and Dest but can’t progress inward or forward due to the numerical inferiority on the wing. The same thing happened higher up the pitch and on the other flank as well. Whenever Barcelona tried playing through the half-spaces, the hosts would overload it immediately.

You can see an example of that in the image down below. Pedri drifts out wide to combine with Roberto but the two are quickly outnumbered and the play goes backwards as the Catalans can’t progress. 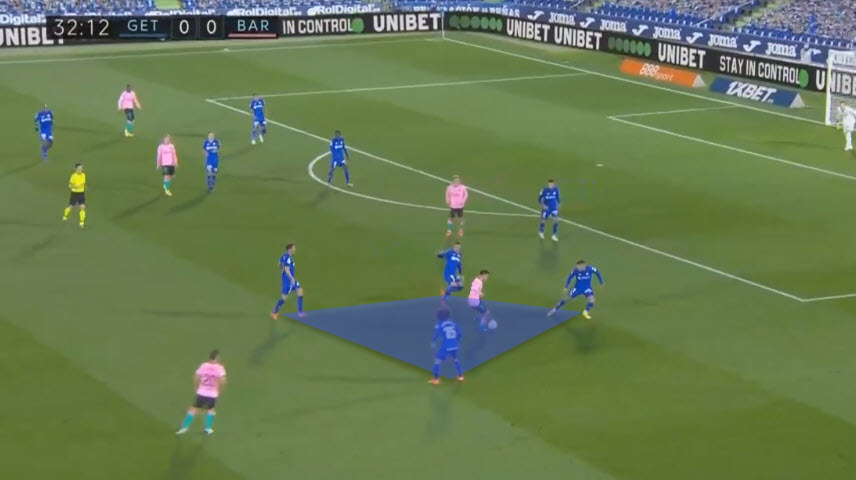 Just for reference sake, we’ll explore Getafe’s defensive duels map in both halves of the game, which can be seen down below. There are a couple of important things to notice here.

Firstly, we talked about their aggression and how it was mostly focused on the first two thirds of the pitch. This graph can confirm that thesis.

Secondly, and more importantly, note how there’s a lack of any defensive duels – or simply a much fewer number of them – in the respective half-spaces on both sides of the pitch. This is the entrance that Getafe were trying to protect the most, ensuring Barcelona only have two lacking options.

Number one, cut inside and try and brute-force their way through a congested block in the half-spaces, or advance up the flanks and deploy crosses. They tried both tactics but neither worked well for the Catalans.

A quick glance at Barcelona’s pass map from the game will reveal more issues in their system moving forward. 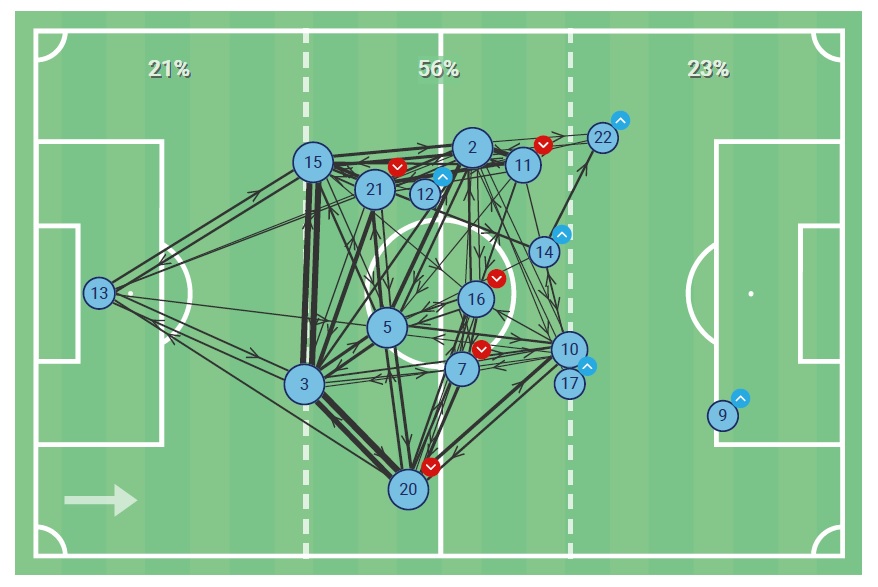 Once again, notice how the connections towards and between the forwards are extremely thin. The first and the final third are where Barcelona saw least of the action. The first one, of course, because they had no issue overcoming Getafe’s pressing tactics, as we’ve mentioned earlier in the analysis, and the final one because there was no way for them to breach the opposition’s block.

It didn’t help that Griezmann was completely cut off and mostly irrelevant while Messi’s role has diminished as well. Barcelona were also prioritising the central channel, which was the easiest one to defend for Getafe.

Dembélé was deployed on the left and, unfortunately for them, lacked any rhythm and positional awareness. The right side only had Roberto since Messi cut inside and Griezmann was in a false nine role. All of that made Getafe’s job that much easier to do.

The final part of our tactical analysis will briefly deal with Getafe’s attacking tactics. Understandably, the home side didn’t see much of the ball but when they did, they ensured to make good use of it.

This made for a vertical and direct style of play, focusing on long deliveries and runs in-behind the opposition’s defence. Similarly to their defensive system, Getafe were deployed in a 4-4-2 in attack as well and Barcelona mirrored that approach with a defensive 4-4-2 of their own. 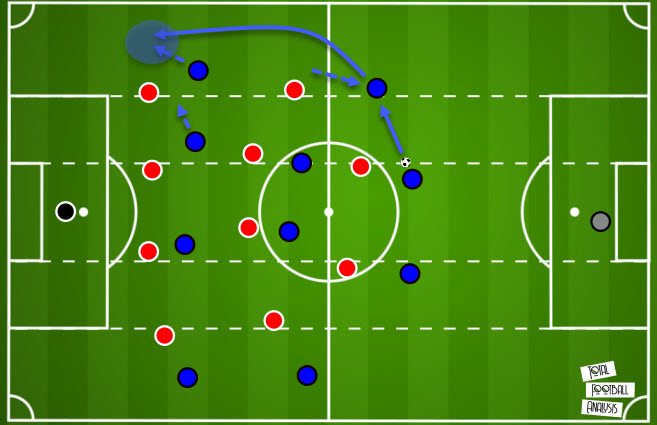 Above, you can see an example of Getafe in possession. The centre-backs would have a couple of options with all of them resulting in a fairly similar thing. Firstly, one of the full-backs would stay deeper to allow for more space and time on the ball and once he received the ball, it would immediately be deployed into the feet of the wide midfielder, who would advance up.

At the same time, one of the forwards would drift wide as well, attempting to create numerical superiority against Barcelona’s defender. The other avenue they explored at times is, again, a very direct route from the backline to a dropping forward.

You can see such an example in the following image. 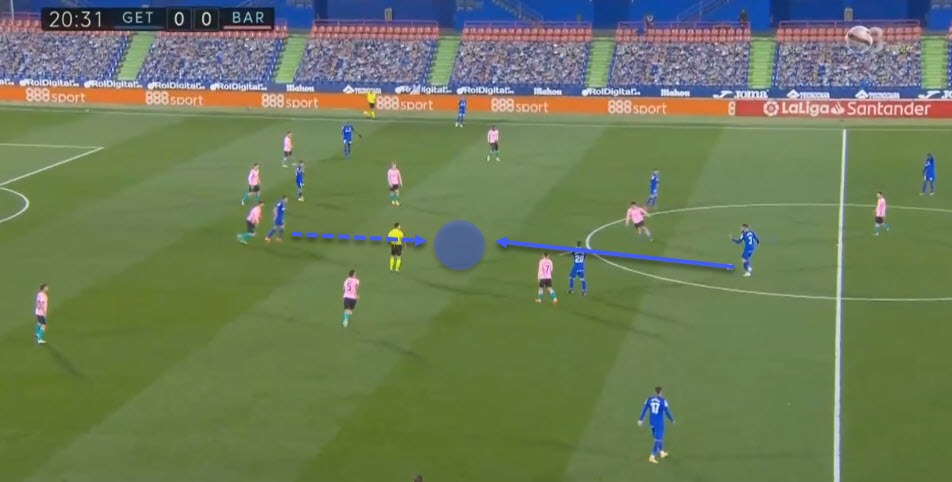 The midfielders open the channel by spreading Barcelona’s defenders and the hosts can then thread the ball to the dropping forward. This, however, was not used often as Getafe didn’t have enough opportunities to build their attacks calmly from the back.

Part of the reason was Barcelona’s pressing and the other just the lack of any noticeable possession of the ball. If we take a look at Soria’s passing throughout the game, it tells us a rather similar story.

With only one pass made inside his own third, we can see the focus on long and direct balls up the pitch.

Despite struggling to keep hold of the ball, Getafe’s tactics proved to be effective. Being direct, quick, and aggressive both in attack and defence was enough to essentially nullify Barcelona’s approach.

Three points for the hosts and back to the drawing board for the guests!