After a bright start to the La Liga campaign, Granada were out to keep on breaking records with a third consecutive home victory at Estadio Nuevo Los Carmenes on Saturday lunchtime as they welcomed Sevilla in an Andalusian derby against the only side in the southern region to finish above them last season.

The turning point in the game came on the stroke of half-time as Joan Jordán saw two yellow cards in the space of three minutes of first half injury time, becoming only the second red card shown to Sevilla since the arrival of Julen Lopetegui as coach. Granada pushed for a winner with an additional man, but it was not until Yangel Herrera scored a late header that they got it.

This tactical analysis will provide analysis of the tactics of Diego Martínez and Lopetegui in this intriguing battle. The analysis will look into how Granada and Sevilla adapted to the sending off and how Martínez’s side reacted better to secure the victory. 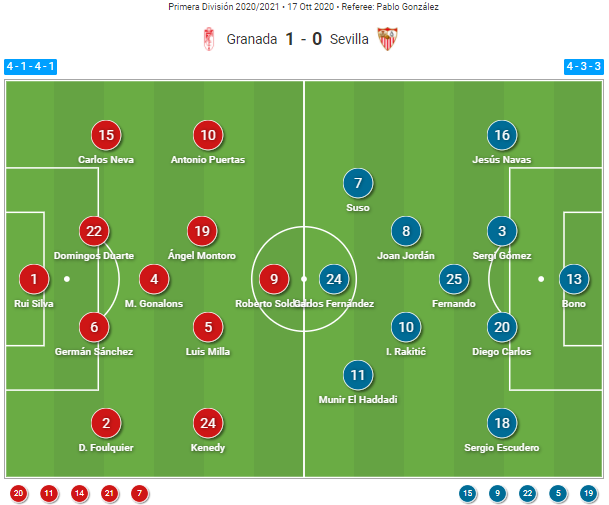 Granada made three changes to the side, with Roberto Soldado replacing Jorge Molina in attack, Domingos Duarte resuming his spot in the centre of defence at the expense of Jesús Vallejo, and Ángel Montoro coming into the side. Montoro replaced Herrera, the eventual matchwinner as a substitute, who only returned from international duty with Venezuela on Thursday.

Sevilla also made changes, with one eye on their Champions League tie in midweek against Chelsea. Marcos Acuña, Lucas Ocampos, and Luuk de Jong were all left on the bench, replaced by Sergio Escudero, Munir El Haddadi, and Carlos Fernández, in his first start of the season. Jules Koundé was also absent after testing positive for COVID-19, replaced by Sergi Gómez ahead of summer signing Karim Rekik.

Making his first start of the season, there were a lot of eyes on Fernández as he made his return to face the club where he made his name in La Liga last season. Yet, it didn’t go quite according to plan with an anonymous and hugely disappointing display. Rather than blaming the striker himself, it is important to note that the service to him and the support given by the wide forwards on this occasion was poor. He received just four passes in his 51 minutes of action. For context, that’s the same as when he played just 11 minutes, including five of injury time, as a substitute against Barcelona.

Positioned centrally, the wide forwards would be slow to catch up with play and often stick to very wide areas. Granada’s narrow defence, supported by the holding midfield pair of Maxime Gonalons and Luis Milla, were able to isolate Fernández, effectively circling him into a ring of isolation. This meant that even when he did get onto the ball, his passing lanes were closed with very few options. That explains how he made just nine passes, frustrated without receiving the ball and with nowhere to go with it when it did come his way.

It was also indicative of how Fernández has grown more accustomed to playing in a front two or in a deeper or wider role, operating as a support figure, rather than as a lone central figure. Without this support or target, he struggled. His work rate cannot be questioned though. He won two fouls, made three interceptions, and won all three of his defensive duels, and when the ball did not come his way, he would drift wide to get involved in areas where possession could be found. The problem then came in that nobody took up the space he had left behind in the middle.

Sevilla’s reaction to the dismissal

Lopetegui has not had many chances to adapt his team to 10 men, the only previous red card having come in injury time to Lucas Ocampos, but here he had to react, changing the team’s shape to a 4-3-2, with the man accompanying Luuk de Jong changing depending on the side the attack came down. However, Sevilla retracted into their shell somewhat. They sat back, allowing Granada to dominate possession and instead only looked to attack on the counter.

Before the dismissal, the back four positioned with both full-backs, Escudero and Jesús Navas, pushed high up the field, with a midfield constructed of Ivan Rakitić and Jordán ahead of Fernando, with Fernández flanked by Munir El Haddadi and Suso on either side.

Defensively, this was also the case. One wide forward would drop deep later on, having pushed further up the field. This meant that the central midfielders would often have to drift one man wide to cover the Granada attack. This left space open which Granada could exploit to push forward their own full-backs, Dimitri Foulquier and Carlos Neva, far more than they usually would. Below, such spaces can be seen as Sevilla rush to regain position late while Foulquier advances.

Without the central figures which work as the engine room of Sevilla’s strategy, Sevilla lost their structure and discipline and that allowed Granada to overcome them. Lopetegui appeared reluctant to sit back and settle for a point, but in doing so, took risks which allowed Granada to push forward and exploit weaknesses which came from the one-man deficit.

With this in mind, it is easy to see why Granada focused so much of their gameplay down the flanks, looking to put crosses into the box, something they did successfully with 26 crosses in total. They haven’t made more crosses in a Primera División game since they were promoted back from Segunda in 2019, with the last time it happened coming in a defeat against Sporting Gijón in April 2019.

Much of this was built around the approach not only of capitalising upon the spaces which were opening up in wide areas, but also on the weaknesses in Sevilla’s discipline in central areas. This came through two key reasons: Gómez, having come in for Koundé, and Rakitić, who was not accustomed to having so many defensive responsibilities, usually having a freer role while Jordán would take up these marking tasks when under pressure.

As Foulquier pushed on to deliver yet another cross, his fifth of the tie, it is evident that Luis Suárez and Antonio Puertas have occupied Gómez and Diego Carlos, looking to drag them apart and open up a wide area in the central space between them. With Navas dragged wide on the right and Fernando being dragged deep, that left Rakitić unaware of Herrera making the run in behind him.

Puertas continues his run to the near post, dragging Carlos further away from Herrera’s run while Suárez sticks to the far post. With Rakitić not following, both men are too slow to react to identify the space that Herrera is attacking, padding into a change of direction which allows the Granada man and his momentum to climb to a greater height to head into the back of the next and give the home team the lead.

This result reflected the tactical expertise and intelligence of Granada boss Martínez. Lopetegui is an expert himself, but Sevilla’s approach was clearly thrown off course by the red card which was additionally complicated by the rotations which he had made to his team. Granada capitalised upon the weaknesses of Lopetegui’s changes smartly, identifying the gaps left in marking and throwing all attacks into wide areas where Sevilla were light on cover. That, added to the defensive structure and isolation which were used in the first half, meant that Granada were able to see out the result with an efficient and hard-fought victory.